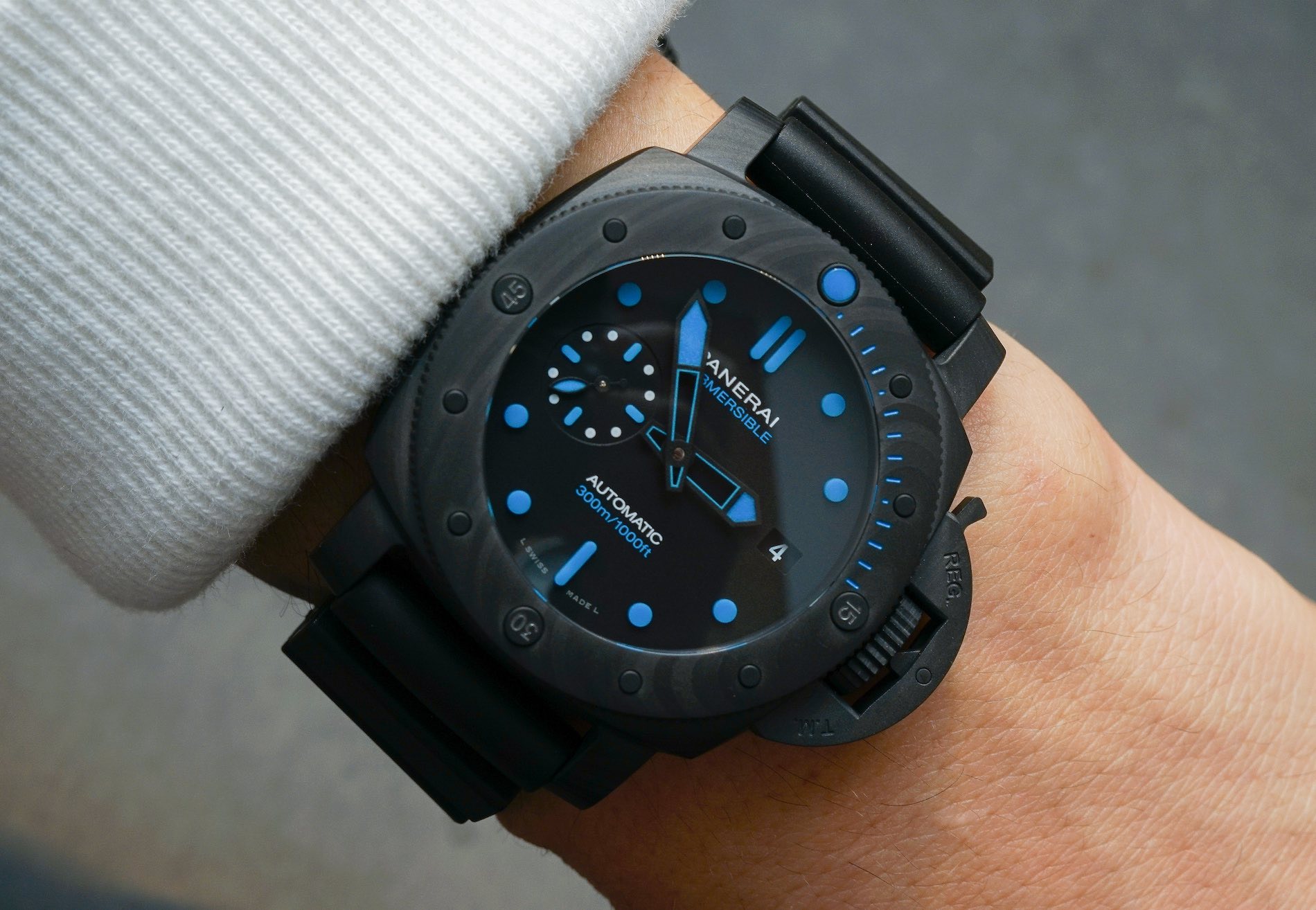 Let’s get one thing straight: These are far from the most interesting Panerai watches we saw in their SIHH booth this year. On top of some extremely cool high-complication pieces, the brand also launched a new customer experience concept with its ambassadors — each with a unique and highly limited watch to match. But this is a story that longtime fans and Panerai newcomers, alike, have been waiting for, as well as one that hints that the future of Panerai might not rest on the shoulders of dinner plate-sized military watches, no matter how faithful to the source material they might be. This, of course, is the story of the iconic Submersible and the shrink ray, which yields (*spoiler alert*) one of the best-sized and most distinctive dive watches of this show, or any other.

Three new Panerai Submersibles join the line this year: PAM 683 (black ceramic bezel), PAM 959 (gray dial and blue ceramic bezel), and PAM 960 (Carbotech case), bringing the total number of 42mm Subs to five, with the original 682 with the stainless steel bezel and 684 in rose gold being the other two. From the standpoint of a die-hard purist, these smaller references are about as far from the brand’s founding principles as the Due, but I cannot underscore how important a more diversified size and design range is, should the brand continue to evolve. 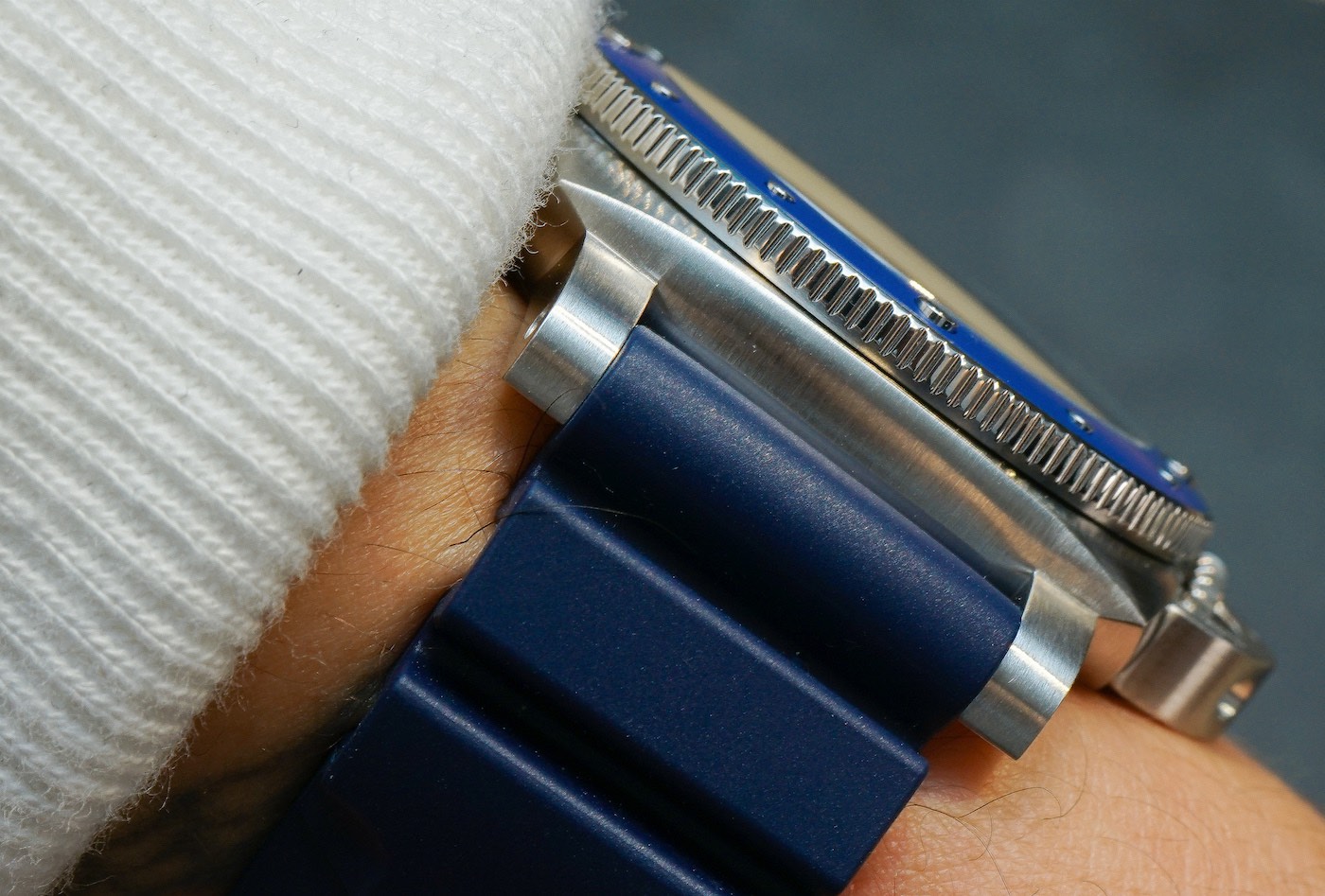 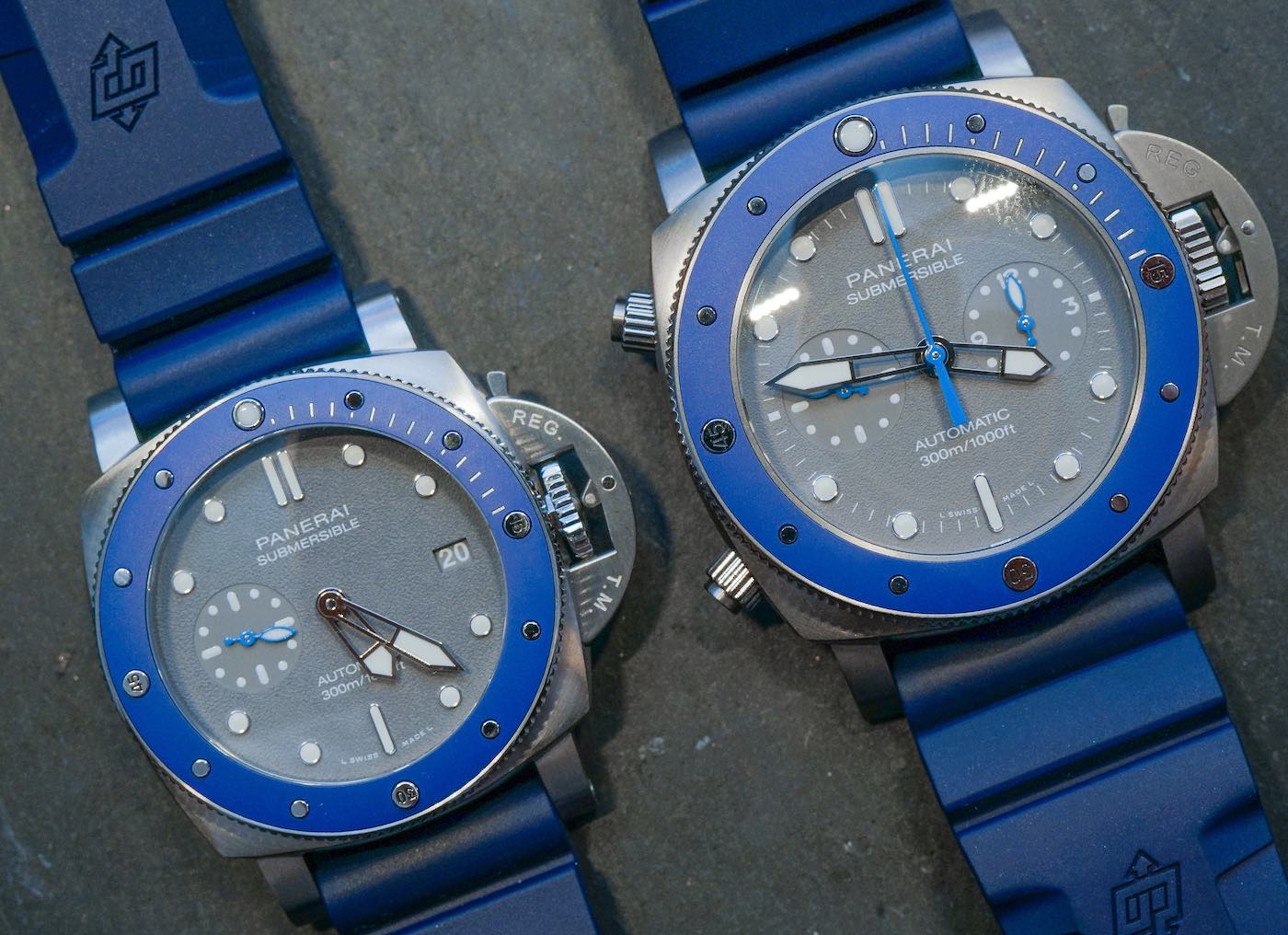 Despite the persistent criticism of smaller references spelling the misdirection and subsequent doom of the brand, long waiting lists at retailers for the 682 throughout 2016 and 2017 suggested an entirely different counter-narrative — that there was not only strong demand for the smaller Submersible, but also that those queuing up for this model were not just Panerai converts, but members of the old ‘Wristi guard, as well. And justifiably so; this is a watch that can be appreciated by all. 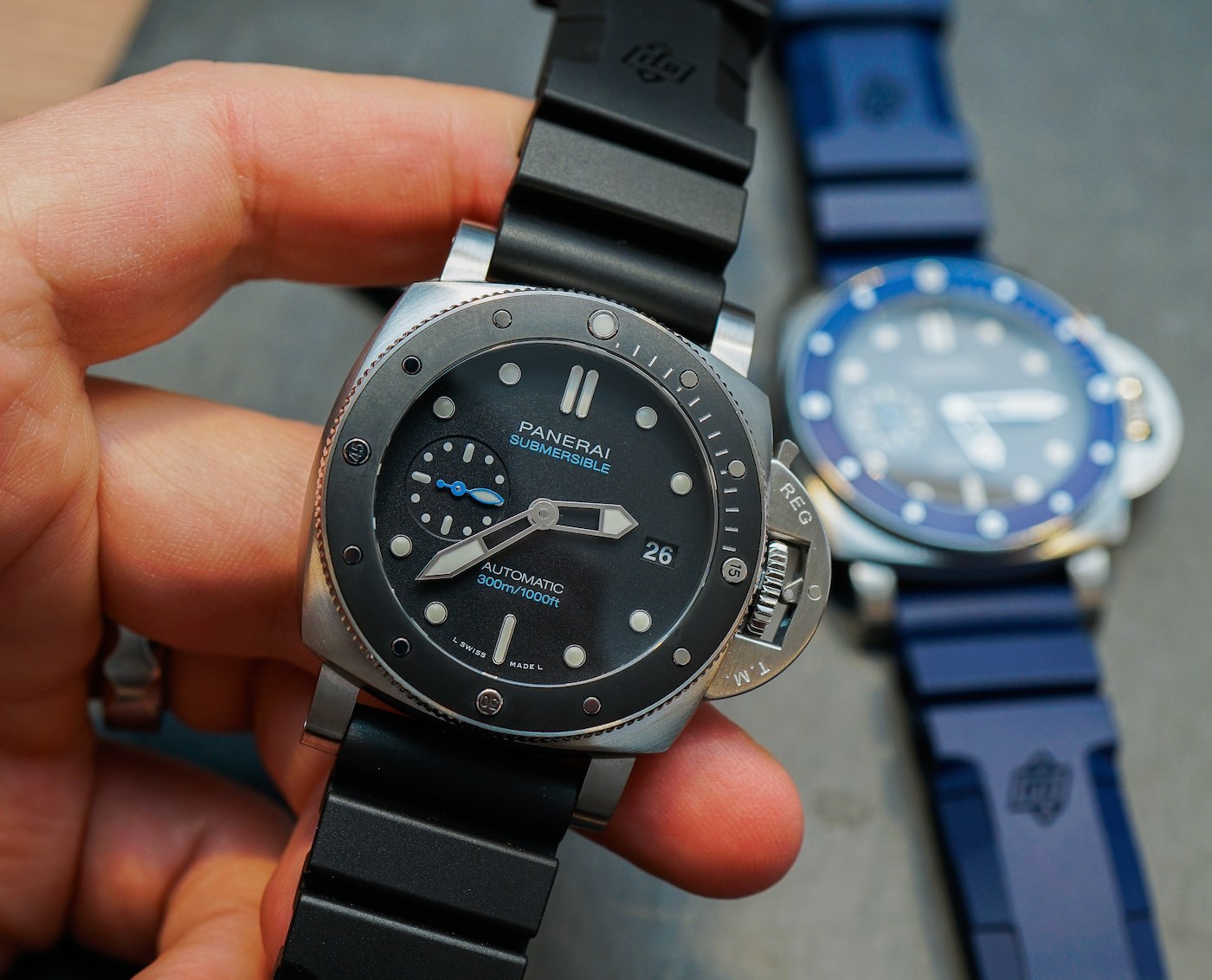 From a design standpoint in the trio, the 683 evokes the most classic look and feel of a handsome modern dive watch, but should also feel the most familiar in the Panerai design lexicon. It simply looks like a 1389 that was hit with a shrink ray. This has long been one of my favorite dive watches (Panerai, or otherwise). Not only is it big and burly, but the polished elements set into the black dial and raised minute demarcations on the bezel are both complemented perfectly by a ceramic bezel. The end result is modern, masculine, and undeniably awesome. But at 47mm, it’s also borderline unwearable for most. 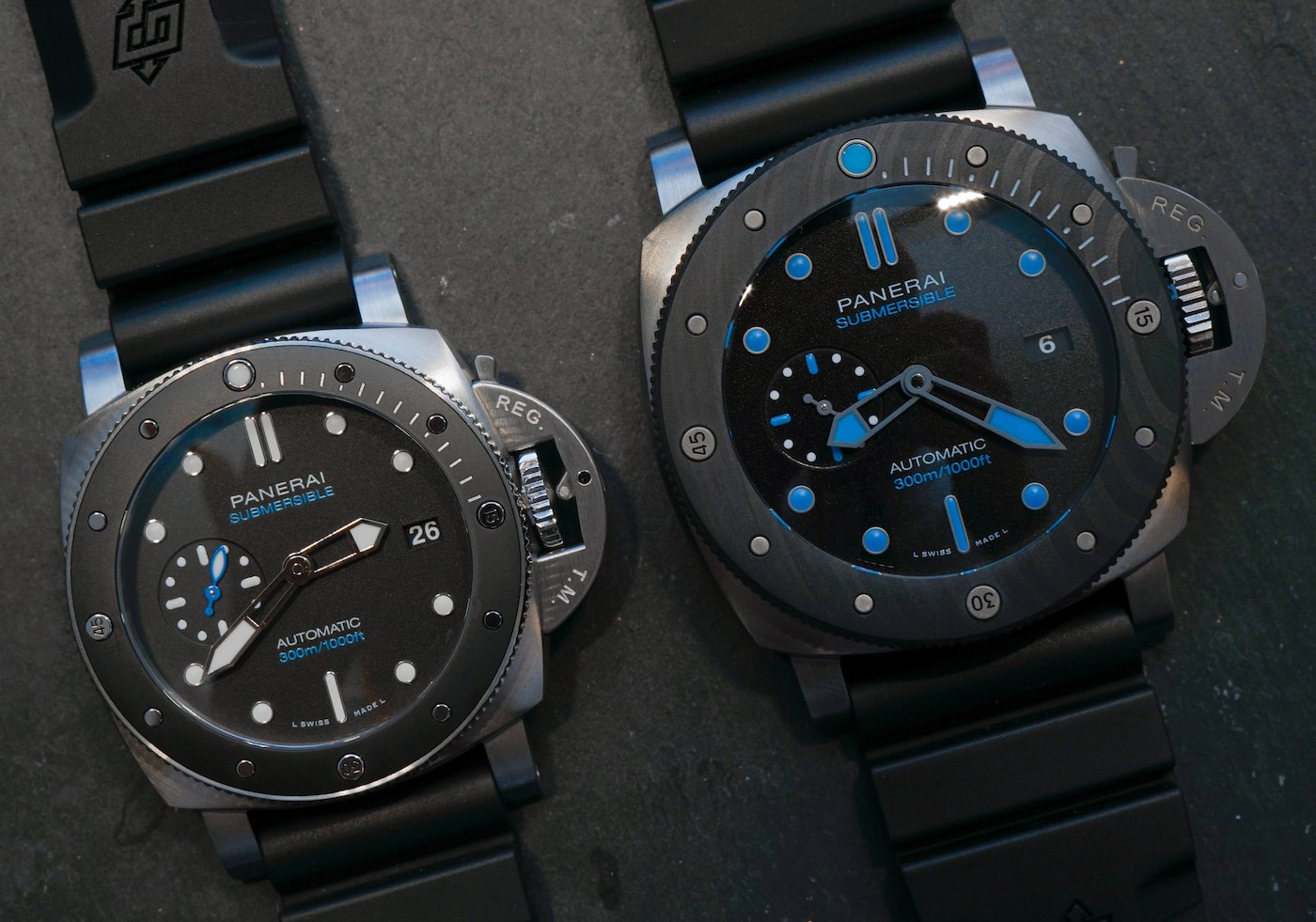 The 42mm Luminor case rectifies this. It still measures a few hairs over 50mm lug-to-lug, but it sits low against the wrist, further restrained in its perceived size due to all the brushed surfaces on the case itself. A closer examination reveals a few other subtle differences between the 683 and the 682, like the re-ordering of the dial wordmarks, which now read “Panerai, Submersible, Automatic,” along with the new addition of the water resistance indicator at 6 o’clock. This is due, in part, to a restructuring of Panerai’s main collections, which now consist of Radiomir, Luminor, Luminor Due, and Submersible. Gone are the “1940” and “1950” designations, which were apparently found to be quite confusing, according to CEO Jean-Marc Pontroue. 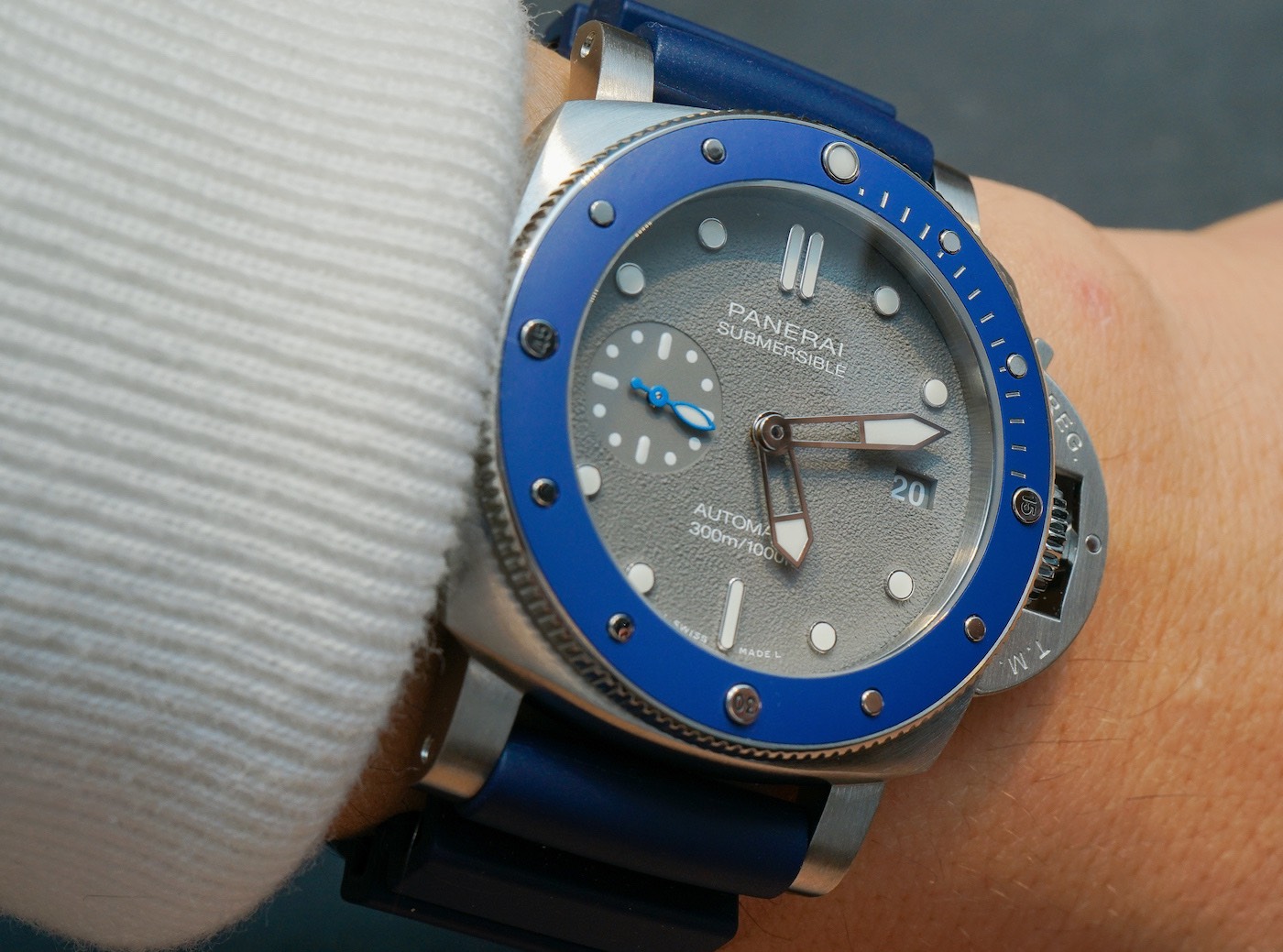 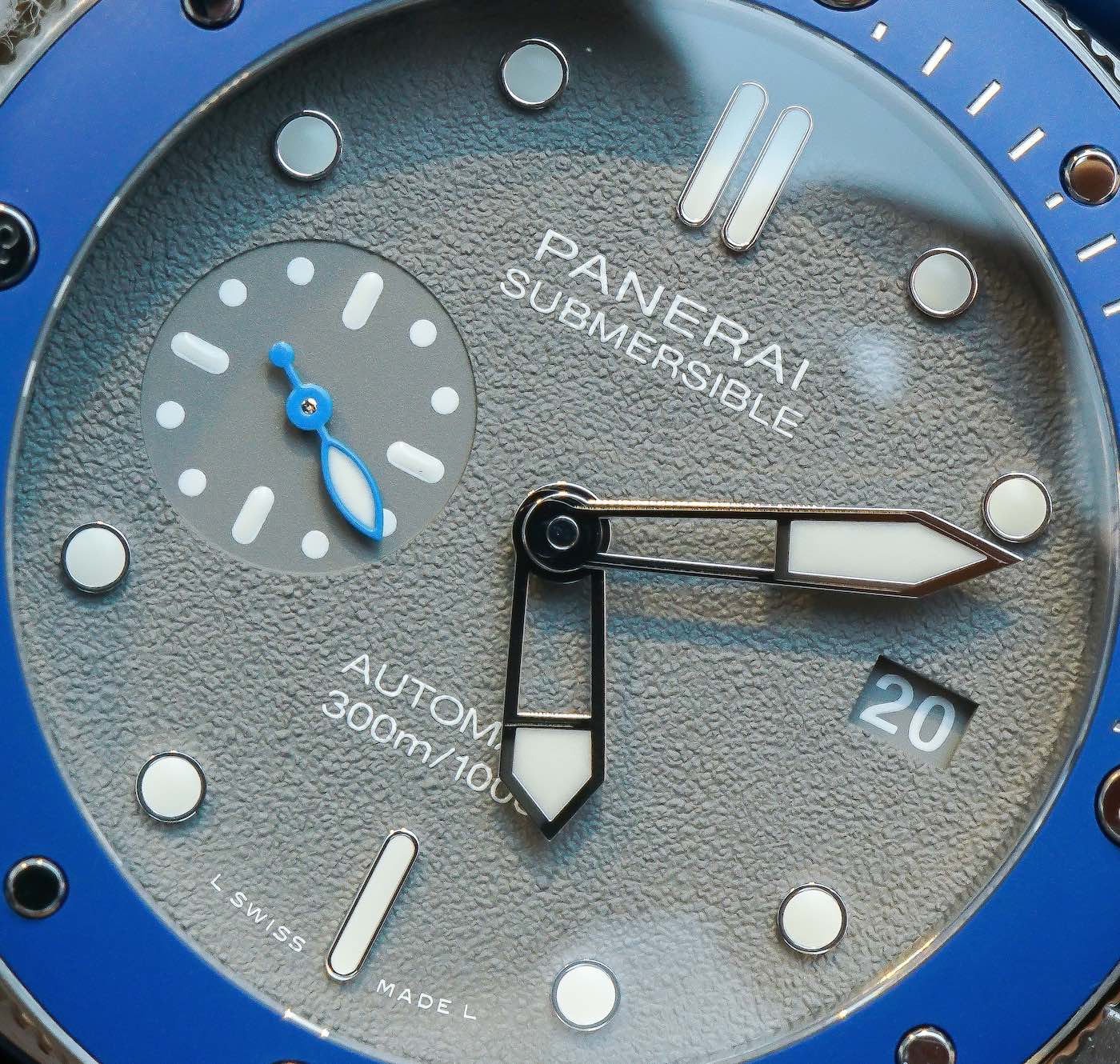 Joining the 683 is my personal favorite of the trio: the 959, which borrows the bright blue ceramic bezel and mottled “sharkskin” gray dial introduced on the Guillaume Nery PAM 982 Dive Chronograph back in December, but in a super-wearable case and bright color scheme that I really think a lot of dive-watch fans (new and old, alike) are going to love. It’s also really great to see Panerai embrace some more youthful color-blocking in this new model — here’s to a lot more of this in the future. 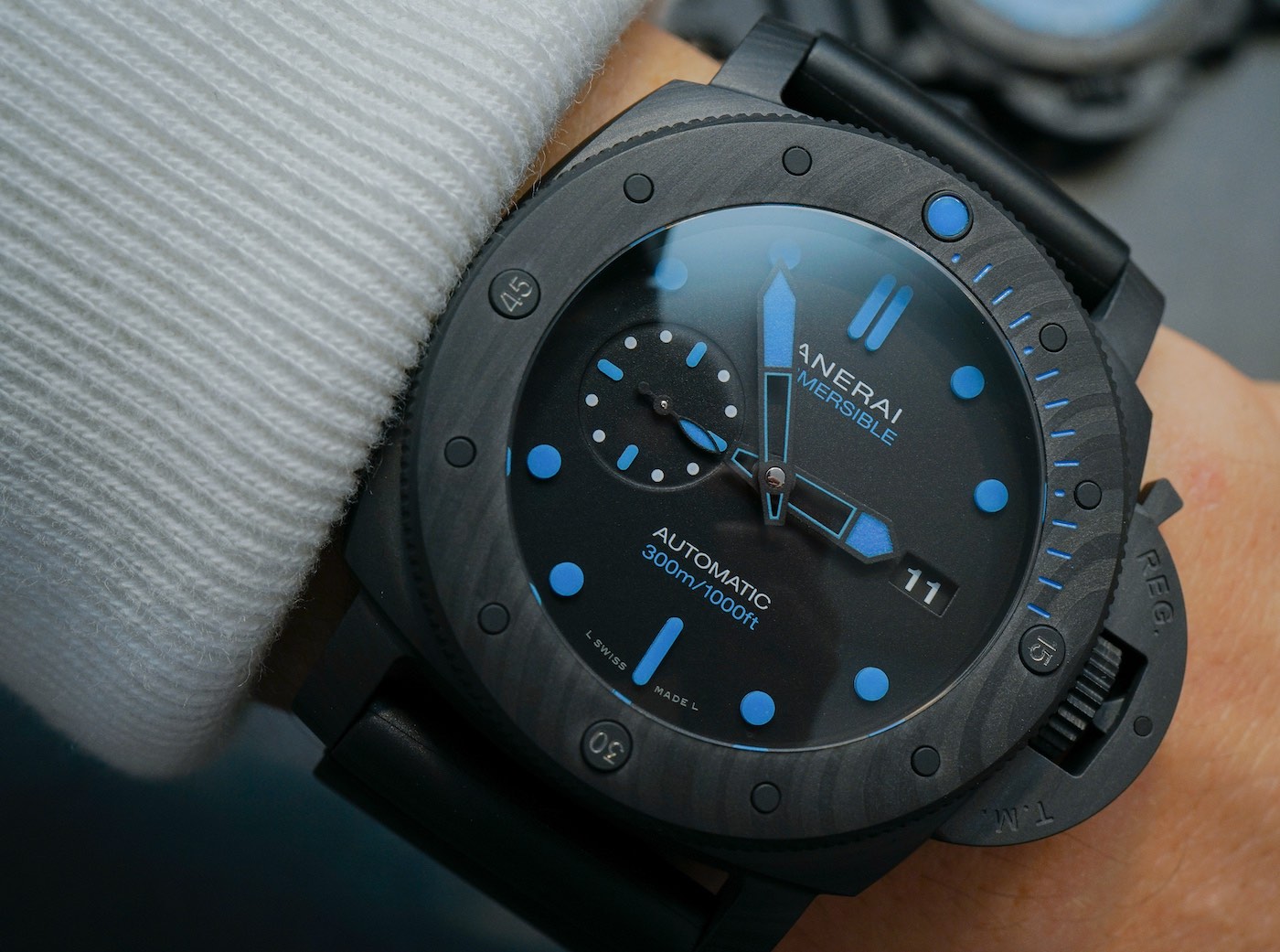 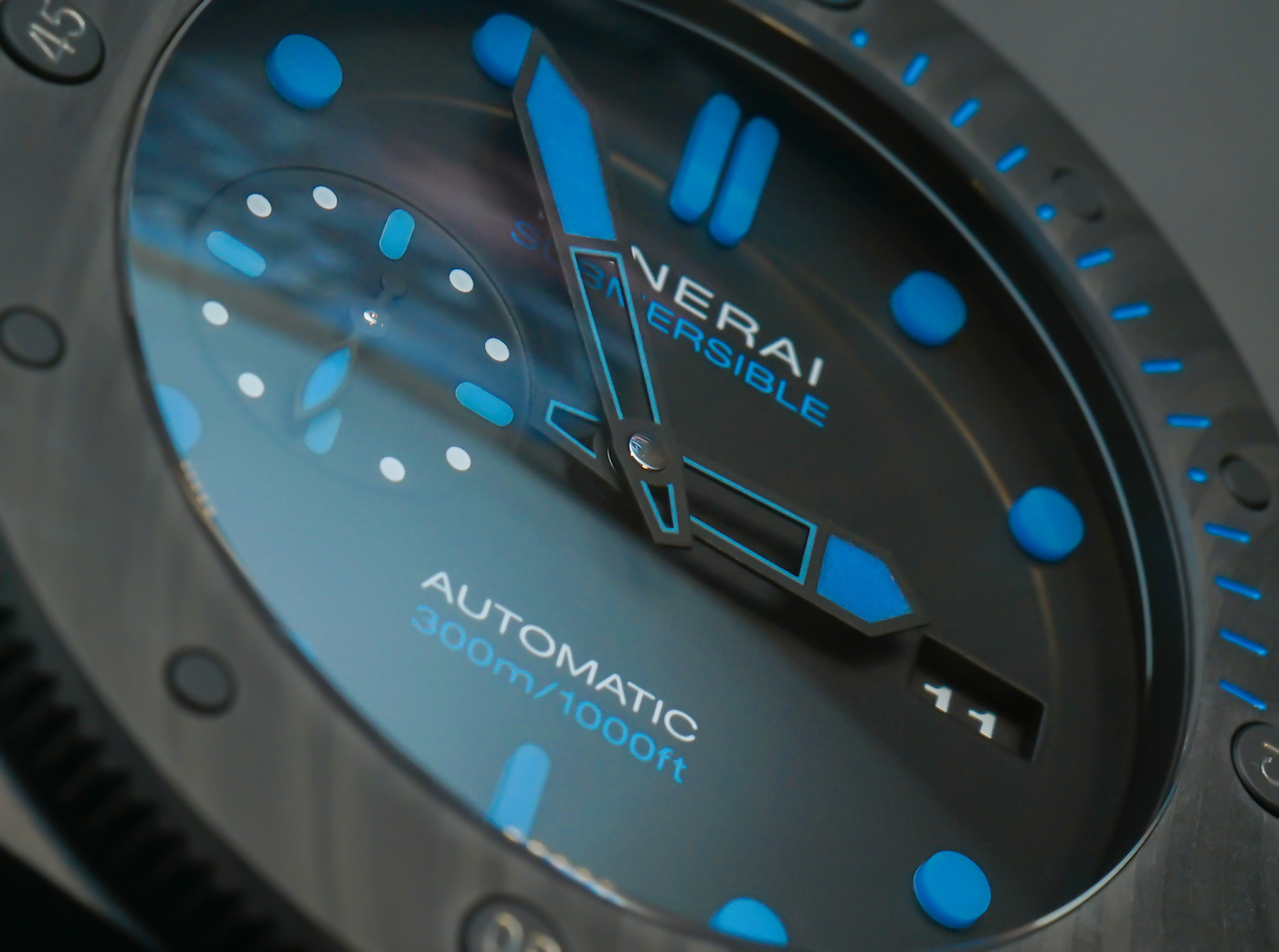 On the flip side of the color spectrum lies the new black-on-black 42mm PAM 960 Carbotech, the smaller companion to the 47mm PAM 1616. Like the new 2019 Marina Militare Carbotech watches, the 960 reference also uses Panerai’s new Submersible dial, which substitutes the traditional applied silver markers and cut out hands for thick cylindrical blocks of Super-LumiNova and a brand new handset that adds two thin strips of the material around each of the cutouts for greater low-light legibility. 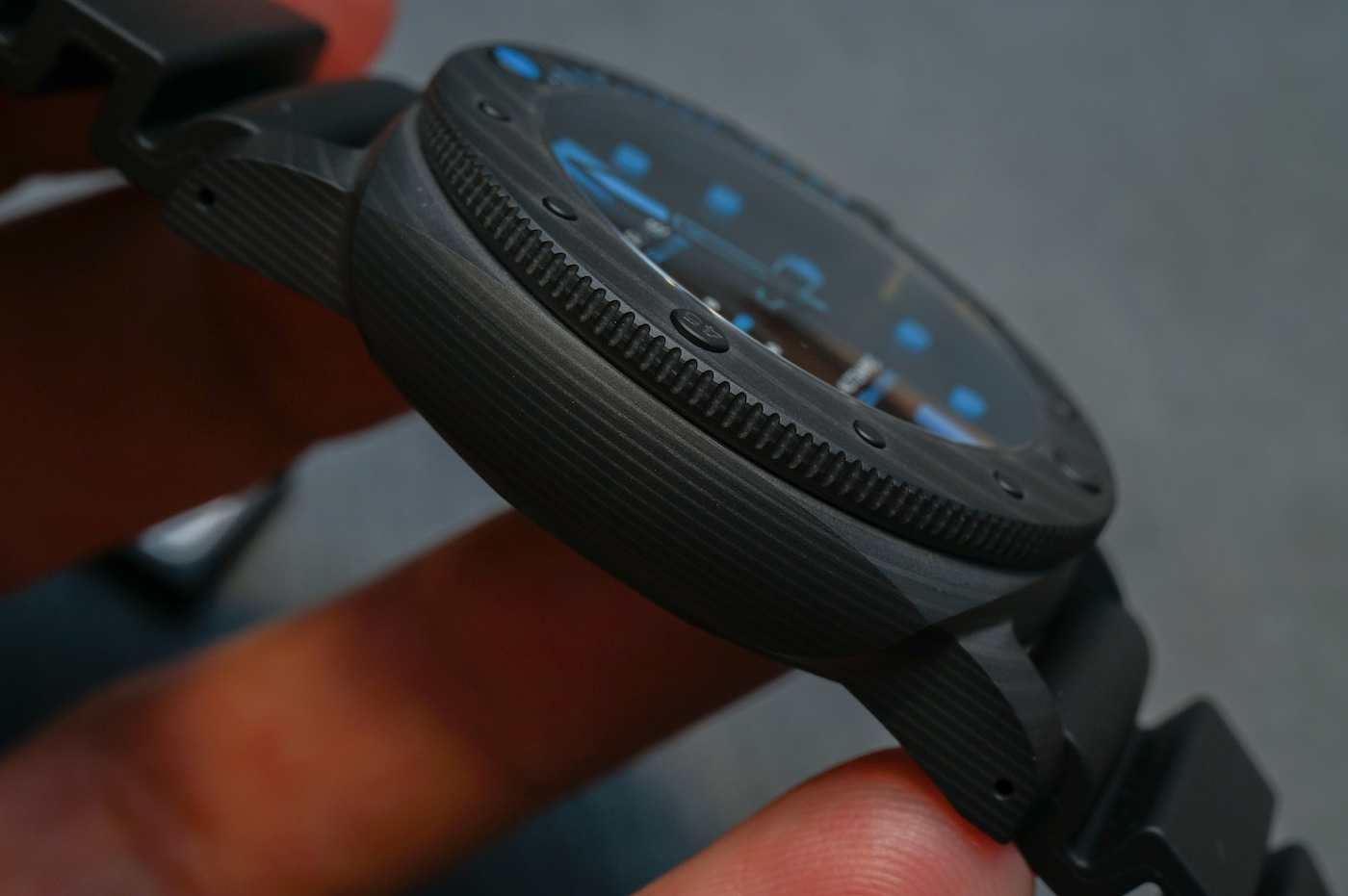 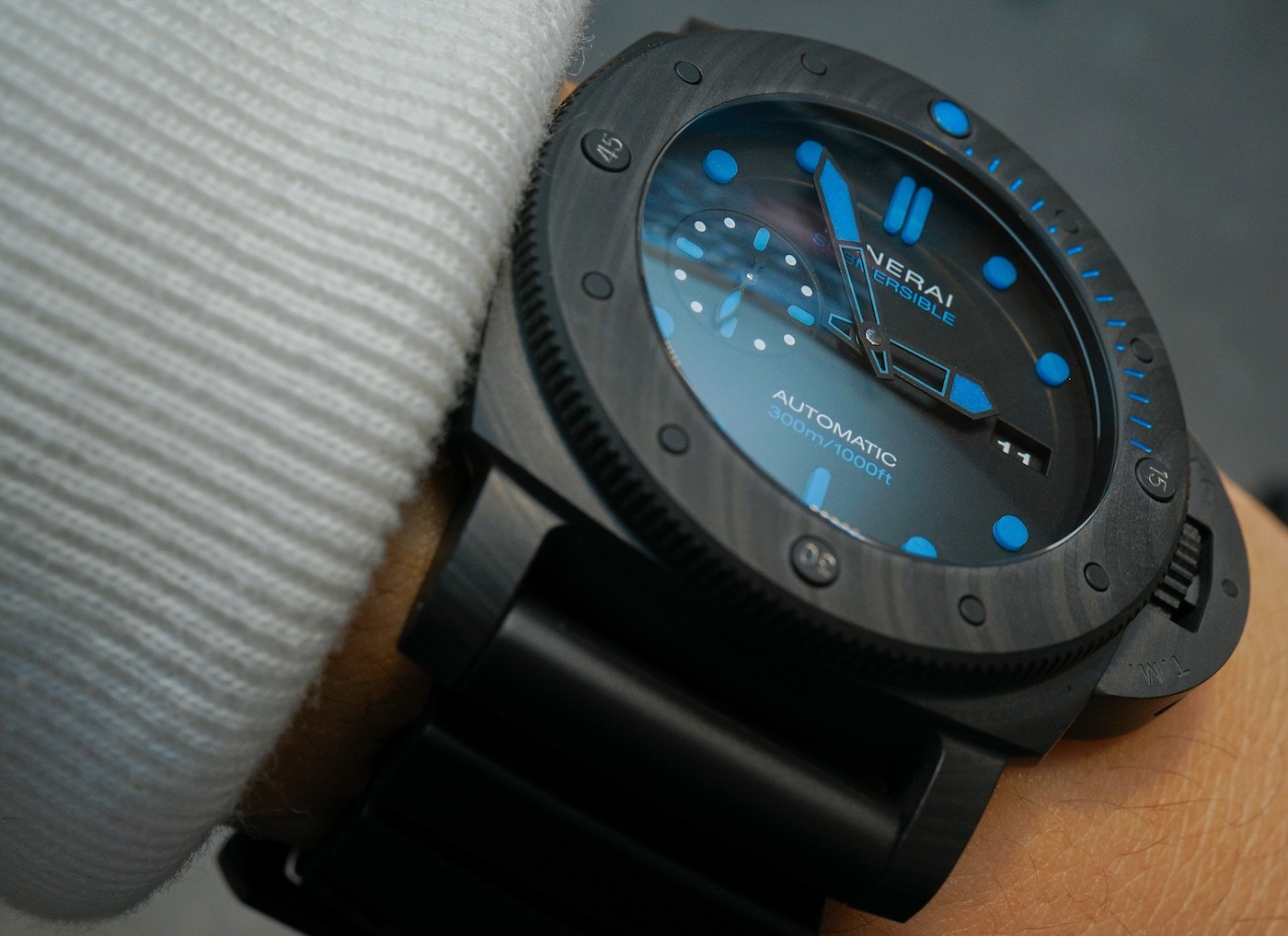 Like the stainless steel companions, the Carbotech reference wears nicely, and is perhaps even more comfortable, due to the case’s remarkably lightweight. And if you’re new to the Carbotech as a technology, it’s essentially Panerai’s carbon fiber case, crafted from many layered sheets of carbon, yielding a cool striping effect when viewed from the side. Furthermore, every case and bezel is entirely unique, given the layering and machining process — kinda neat if you’re into that sorta thing. 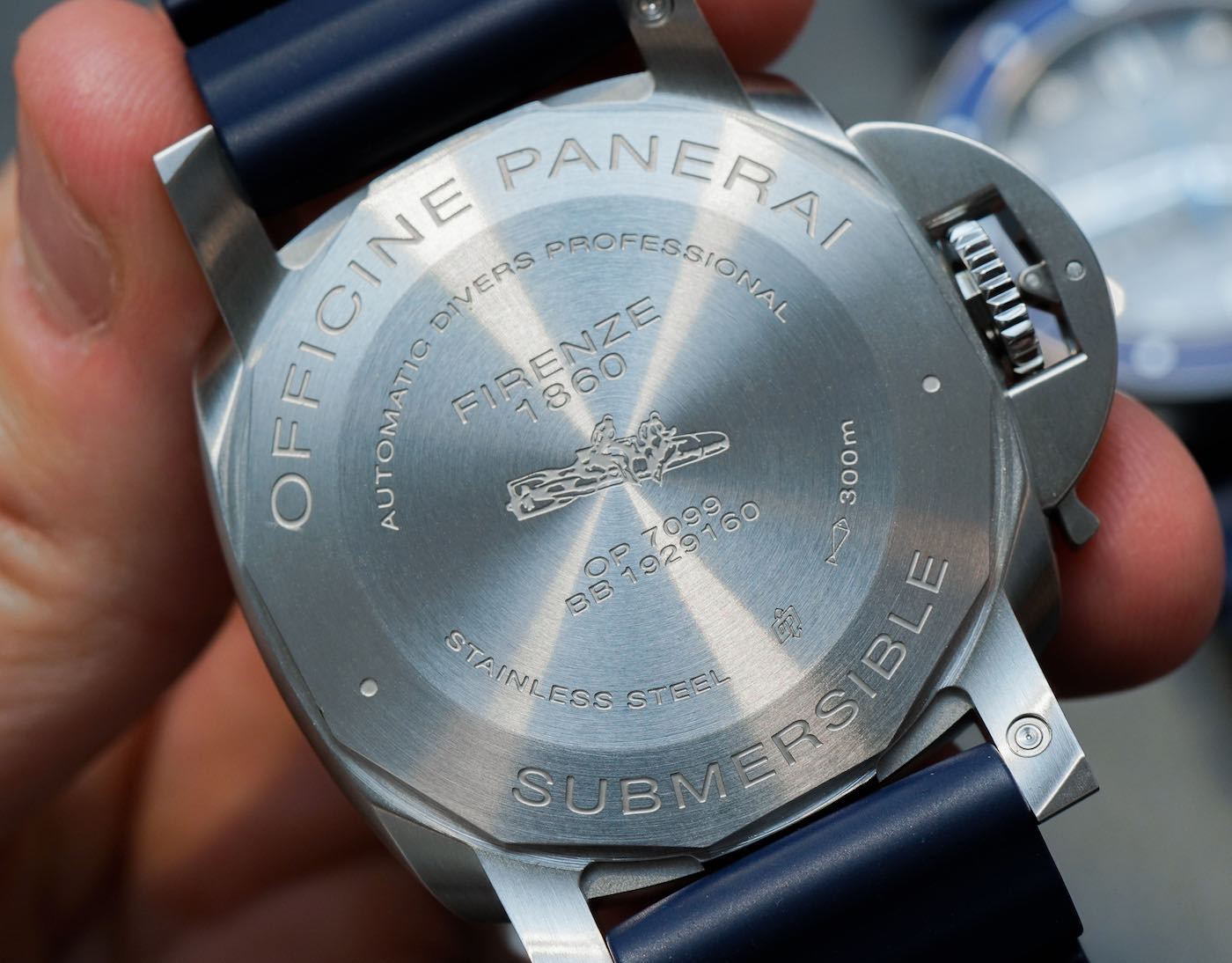 One key difference between the three new 42mm models and the older 682 is what’s inside. While the older reference carried a P.9010 three-day movement, these new Submersibles house the caliber OP XXXIV, a Richemont Group-developed automatic movement tailored specifically for Panerai with a date and three-day power reserve. It’s a relatively simple movement, comprising nearly 30 fewer components and lacking the zero-reset and independently adjustable hour hand found in other 9000 series automatic movements. 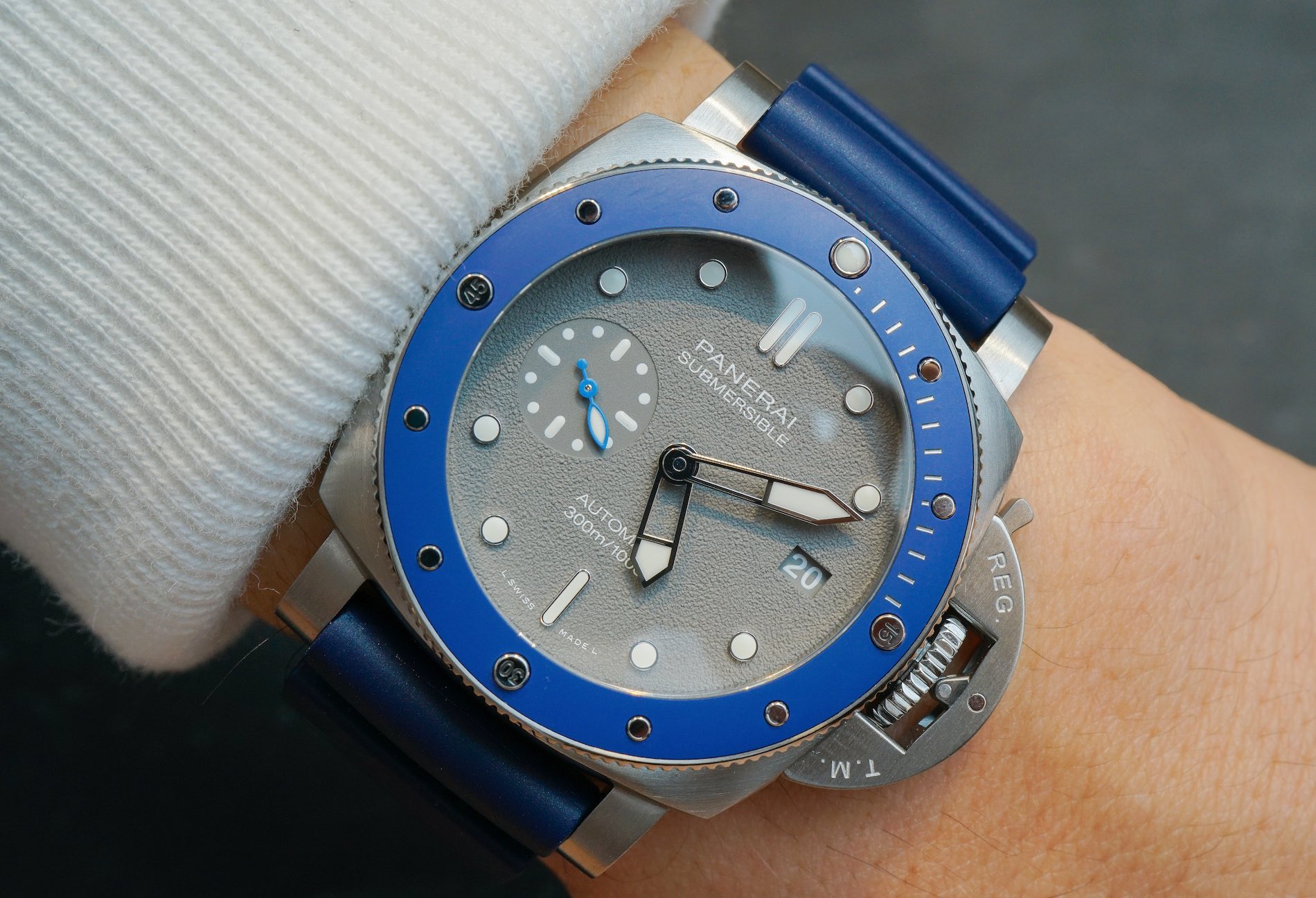 If you’ve been keeping a close eye on Panerai’s more recent offerings, you might have already noticed a lot more of this movement recently, especially in Panerai watches under $10k, like the Luminor Due series. Prices for the new 42mm Submersible watches start at $9,800 for stainless steel, then jump to $18,400 for Carbotech — a considerable premium for a considerably more complex case to manufacture. See more at panerai.com.