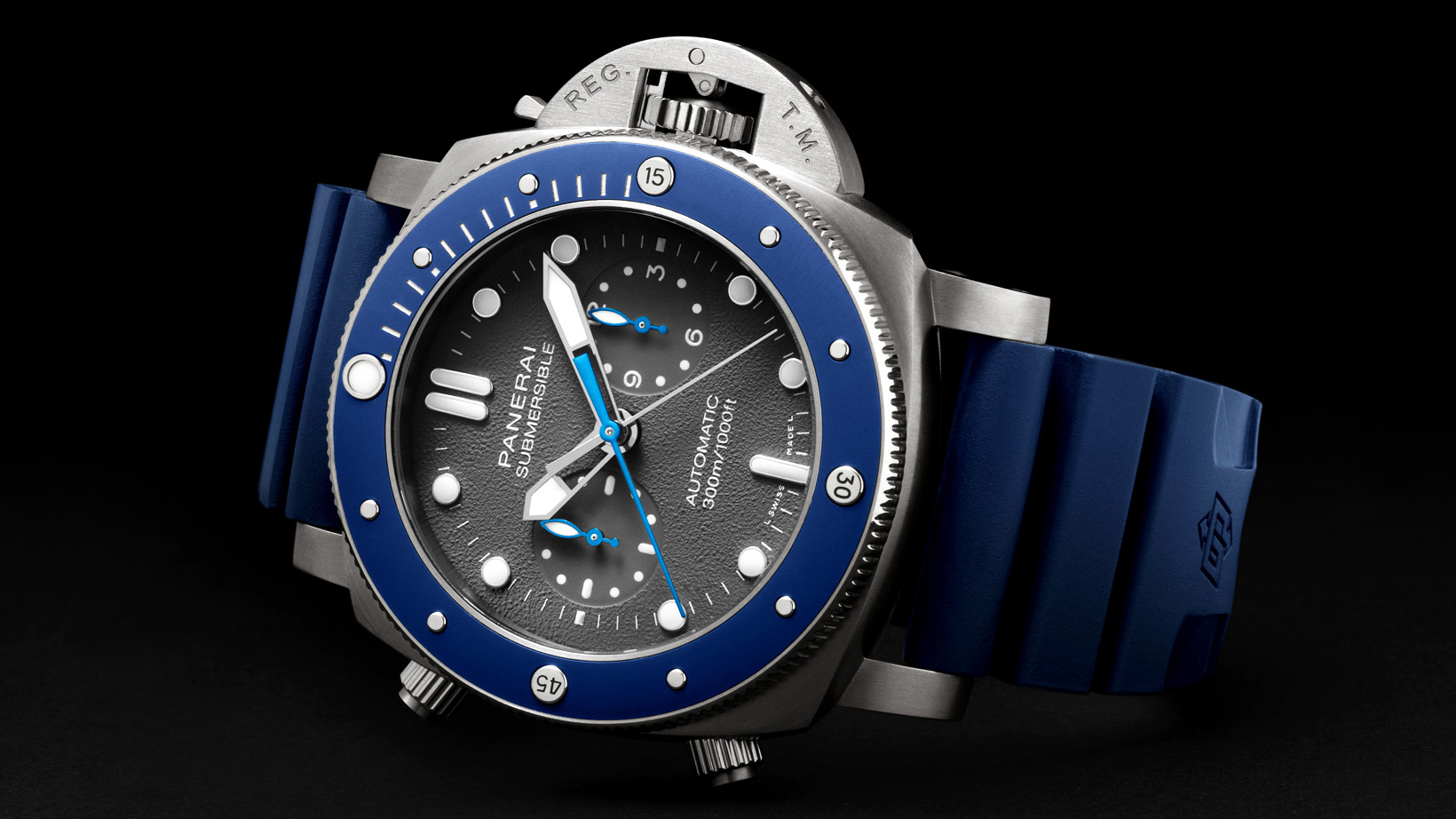 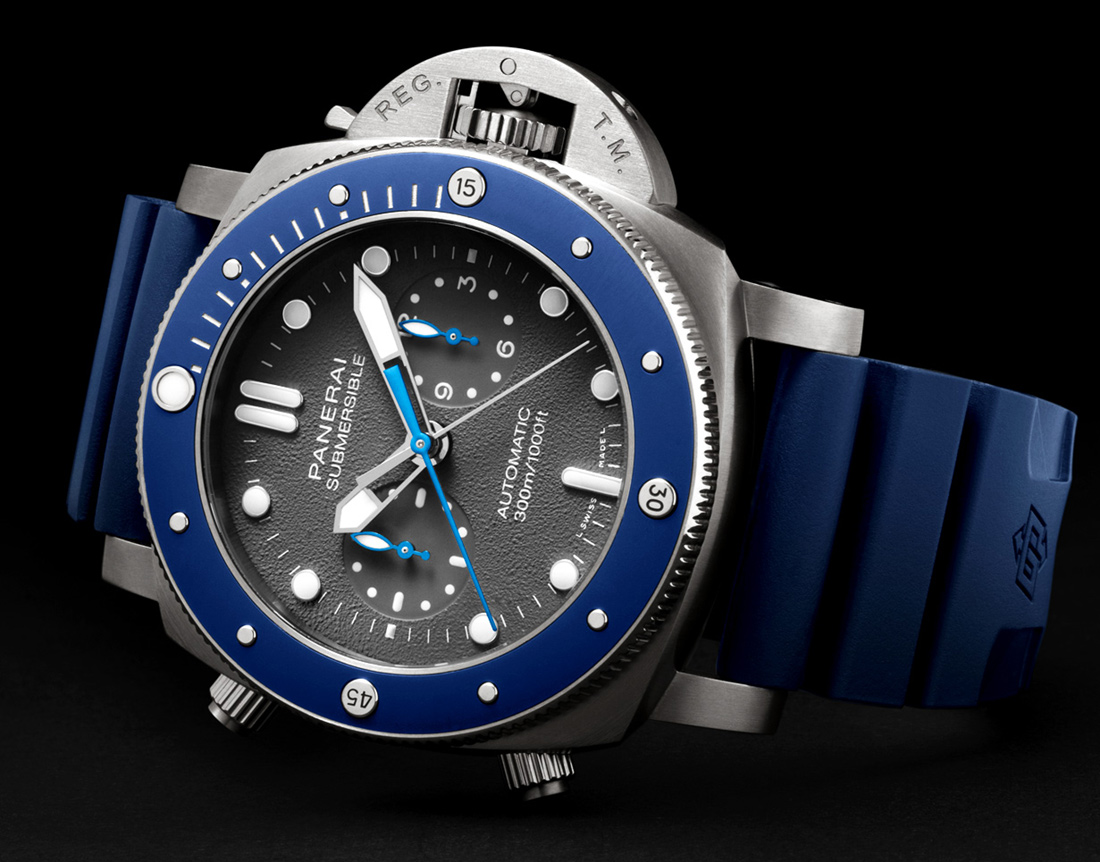 Confession time: as an amateur freediver and general undersea nerd, French freediving champion Guillaume Nery was the first watch ambassador who ever managed to draw me to, and ultimately endear me to a brand early on. And once he defected from Ball at the end of 2016 and subsequently joined forces with Panerai, I made a point to follow along (becoming a Panerai owner in the process), anticipating the special edition that the new partnership would inevitably yield. And while this new Submersible Chronograph isn’t quite my personal cup of tea, it’s still a markedly unique and impressive entry in the Panerai Luminor 1950 collection, purpose-built for the world record holder. 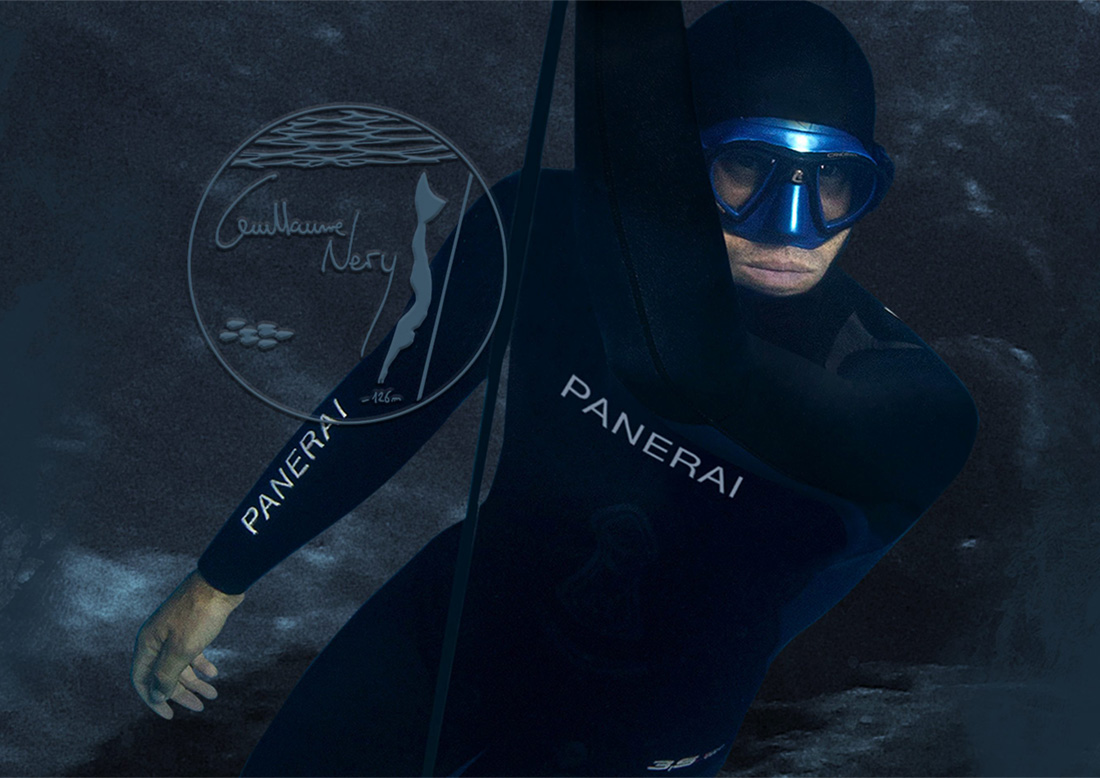 With a single breath hold record of nearly eight minutes, and a personal best dive of 126 meters, Nery isn’t just a supremely gifted athlete, he’s also an outspoken ocean advocate and talented visual artist, who, together with his wife Julie Gautier, have produced a broad catalog of beautiful freediving shorts, including the incredible “base-jumping” video from Dean’s Blue Hole way back in 2010. Hovering around 30 million views, this viral clip is arguably one of the best freedive videos ever made and is justifiably responsible for putting the sport on the collective mainstream’s map. So it should come as little surprise that these attributes made him something of a hot commodity, and the perfect ambassador for Panerai’s Luminor 1950 line, leading with 2017’s “Traits” campaign.

Which brings us to the new PAM 982 – a “pre-SIHH” announcement that’s been made ahead of the 2019 show in January. This is an entirely new Panerai reference that borrows the minimalist dial architecture of the PAM 1389 dive watch and marries it to the titanium case and movement of the 47mm PAM 615 Flyback Chronograph, while mixing in two brand new elements: a matte blue ceramic bezel, and a mottled “shark grey” dial. The case’s reverse is etched with a silhouette of a diver, a small school of fish (inexplicable as their presence may be), along with Nery’s signature and personal best of 126 meters. From a design standpoint, the overall execution works extremely well – the striking blue tones and textures feel like a natural match to the source inspiration, and create a seamless integration into the existing Panerai collection – even for those who might have little interest in the sport of freediving. 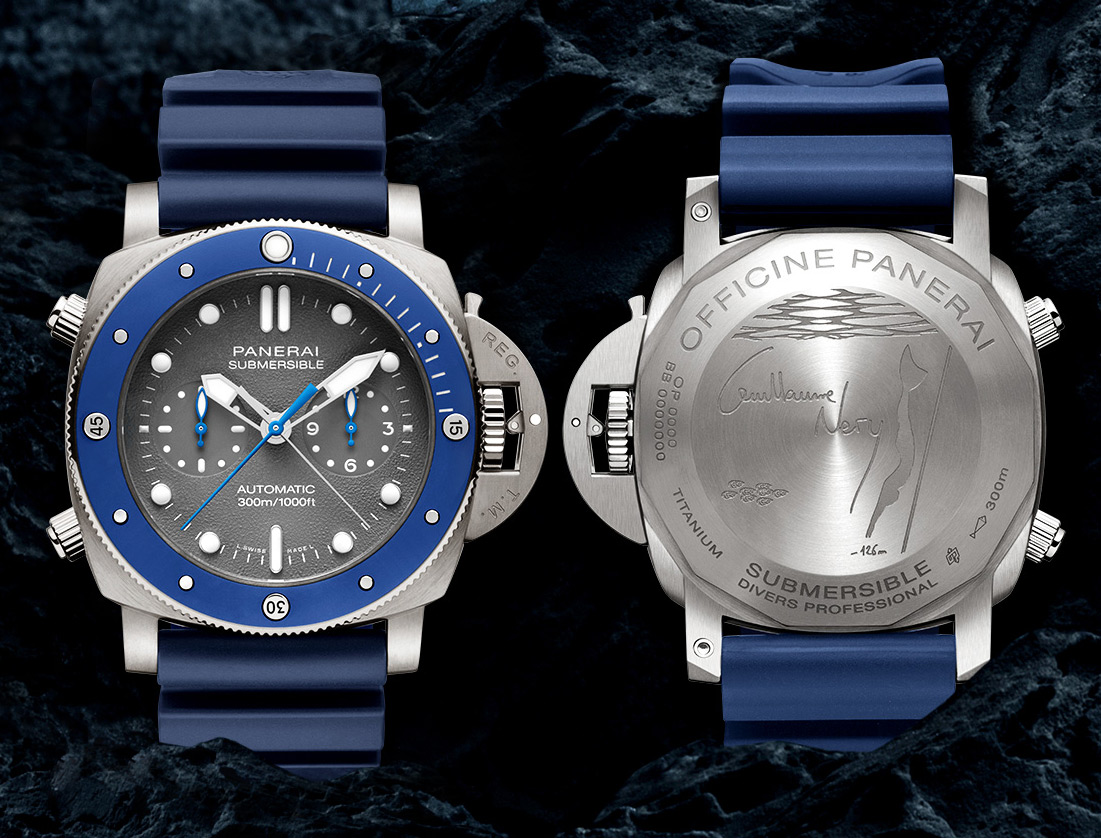 The only real oddity with the watch itself is the movement, which doesn’t seem to have any real benefit to a freediver – or a regular diver for that matter, despite being water resistant to 300 meters. Just like the PAM 615, this new reference uses Panerai’s in-house developed cal. P.9100, which is a column-wheel flyback chronograph movement with three days of power reserve. It has a running seconds counter at 9:00 (which zero-resets when the crown is pulled out – a nice touch), and a 12-hour totalizer at 3:00. Granted, the flyback complication makes a little more sense for racing applications like yacht timing, where this movement is deployed in options like the America’s Cup PAM 726 edition, but it’s admittedly a little odd for freediving, where a highly legible, simple watch like the PAM 1389 exhibited in Nery’s ‘Traits’ video would probably make a bit more sense. 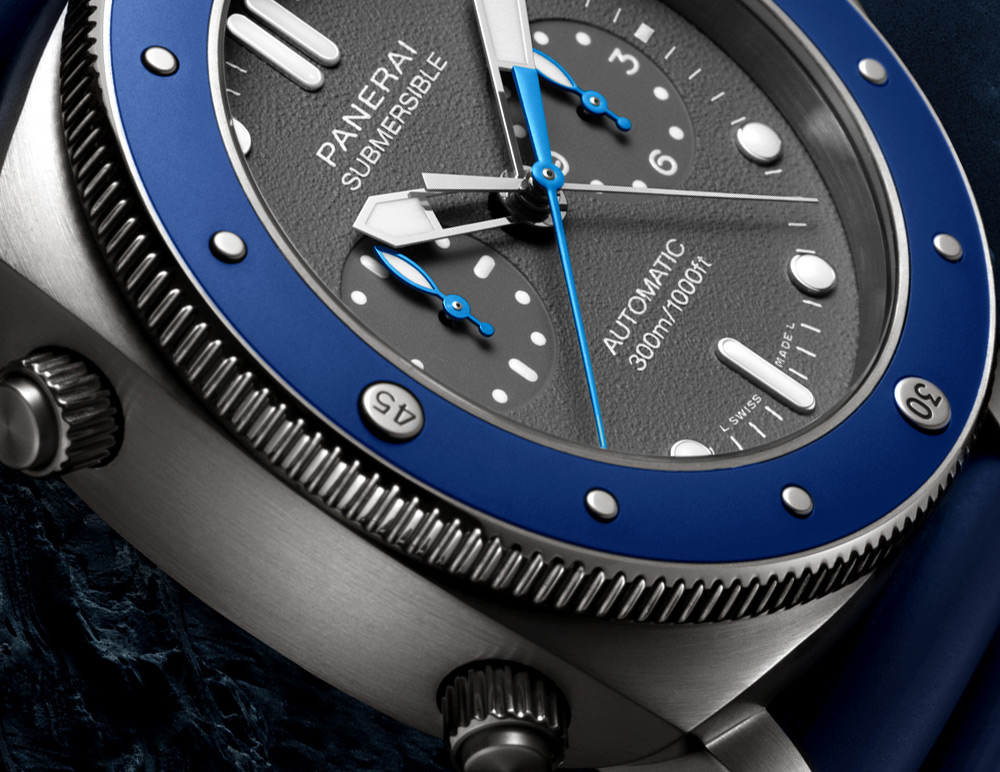 Perhaps the flyback’s signature quick reset could be an advantage when performed immediately before descending, enabling the diver to easily calculate dive times, ascent times, and then surface recovery intervals, but all of this would need to be done with a watch whose pushers could be activated underwater – and we have no inclination from Panerai’s press literature that this is the case. Plus, the pushers have screw-down collars, which suggests that full water-tightness is likely only achieved when screwed down. Another odd choice, is how the chronograph hands (including the silver center-mounted minutes counter) lack luminous paint for at-a-glance measurements, leaving the only practical dive timekeeping duties in marginal lighting scenarios relegated to the bezel and the minute hand – again, just as one would with the 1389. Ultimately, for the asking price of around $20k, it’s a shame that Panerai with all its resources didn’t develop a Submersible complication or execution specifically for a freediver of Nery’s caliber, as Omega once did for another French diving legend, Jacques Mayol. 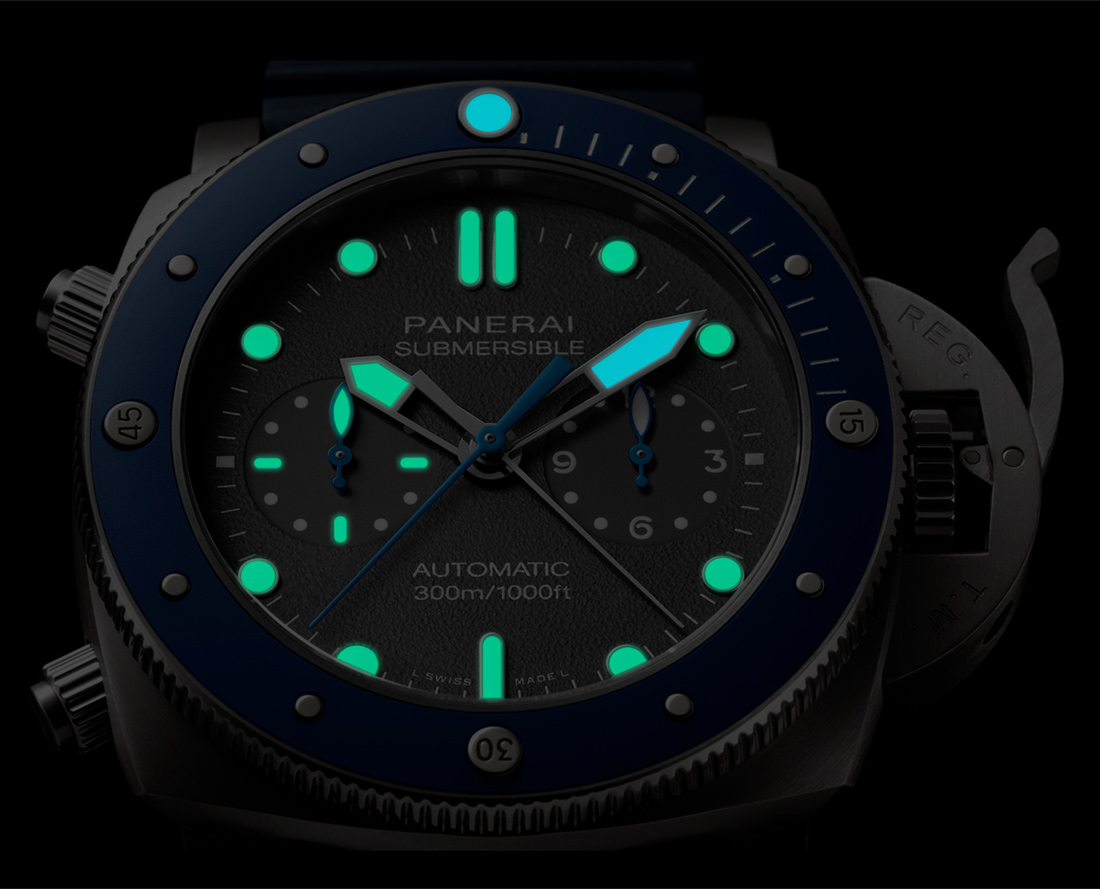 Ahead of SIHH 2019, Panerai has just launched a new e-boutique, where you should be able to soon find this watch with an expected retail price of around $21,500. Head over to panerai.com to learn more and shop this watch.