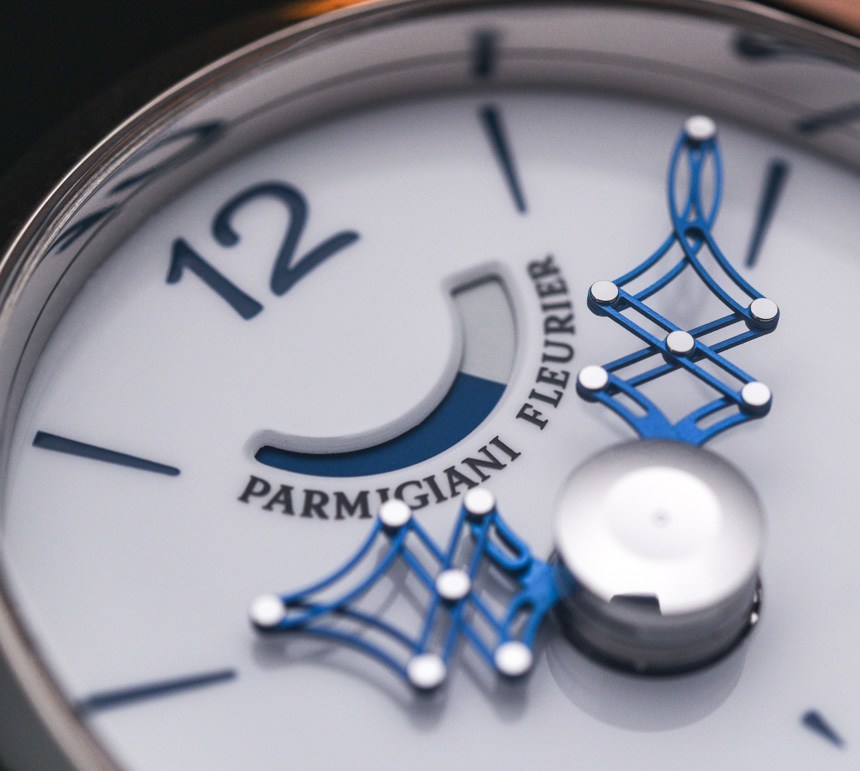 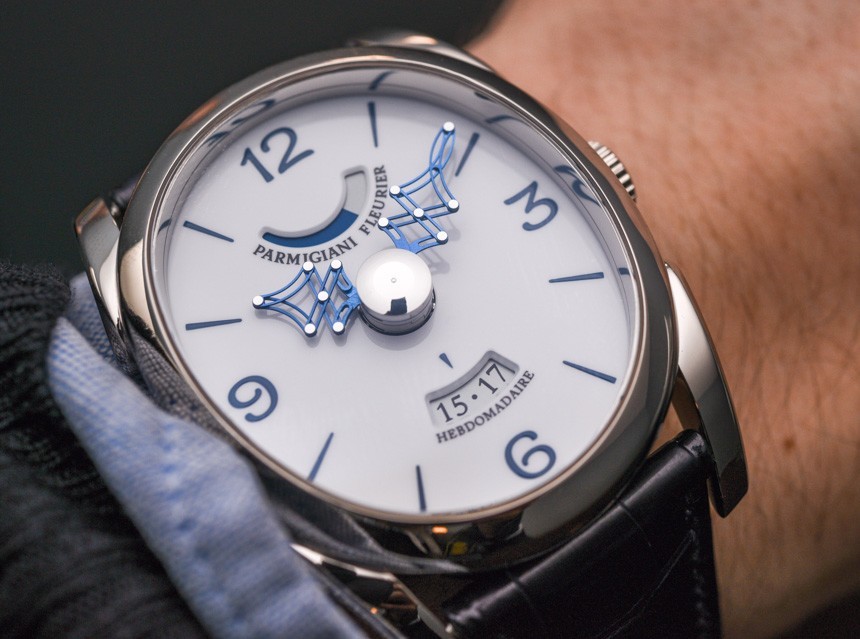 This year at SIHH, I had the chance to finally have my first personal encounter with what to me is a very unique and technically impressive timepiece; one which has actually been around for a few years now: the Parmigiani Ovale Pantographe. There are two major reasons why I have anticipated this rendezvous so much. First and foremost, the pantograph hands and seeing how they worked, and second – because I knew I would love the engineering, but really wasn’t sure about the overall design – seeing and trying the watch on to determine how it worked as a complete package. So please allow me now to tell you how this very personal meeting – with just the rest of our SIHH team and another 4-5 people from the brand – went down. 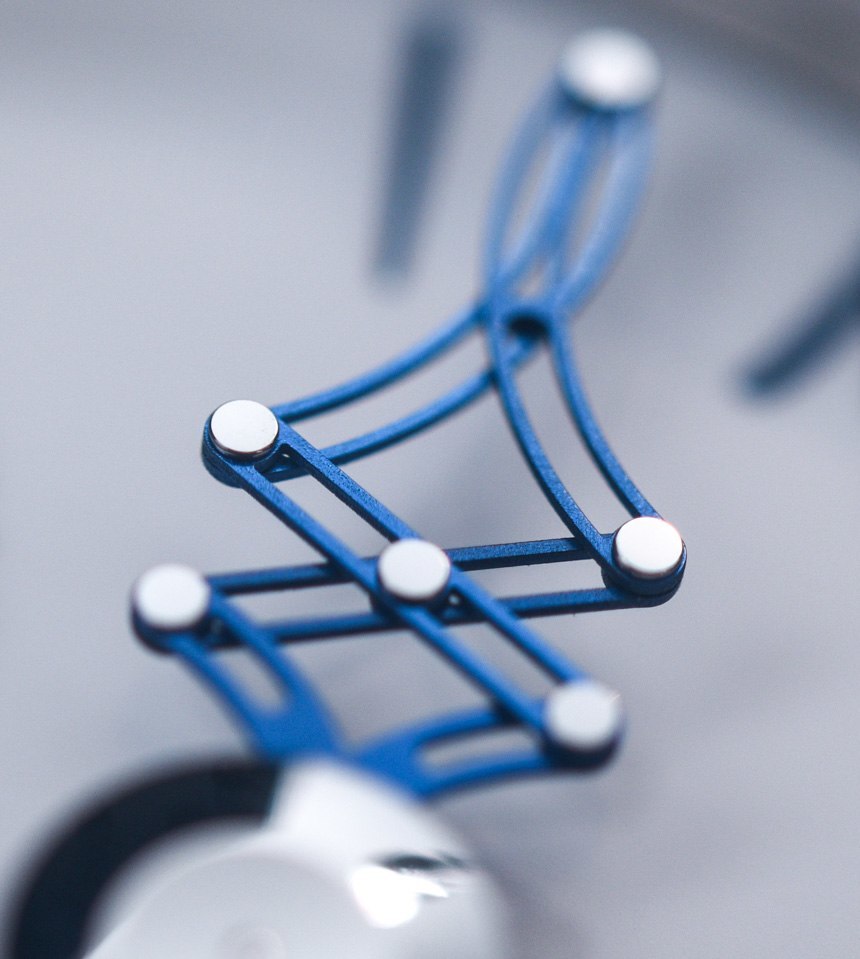 I have to start with the hands, I really do. Had they been fitted to an Invicta, I would still very much care about this construction. Individually cut from titanium with a mixture of water and nitrogen to a tolerance smaller than 4 microns, they are super light and super blue. And because they are so light and thin, they are of course extremely fragile, and so they have to assembled by hand. Both the hour and minute hands are composed of six individual pieces which are held together by six rivets each; because as the hands expand and detract, they have to swivel – and that motion is only made possible by these hand-applied rivets. 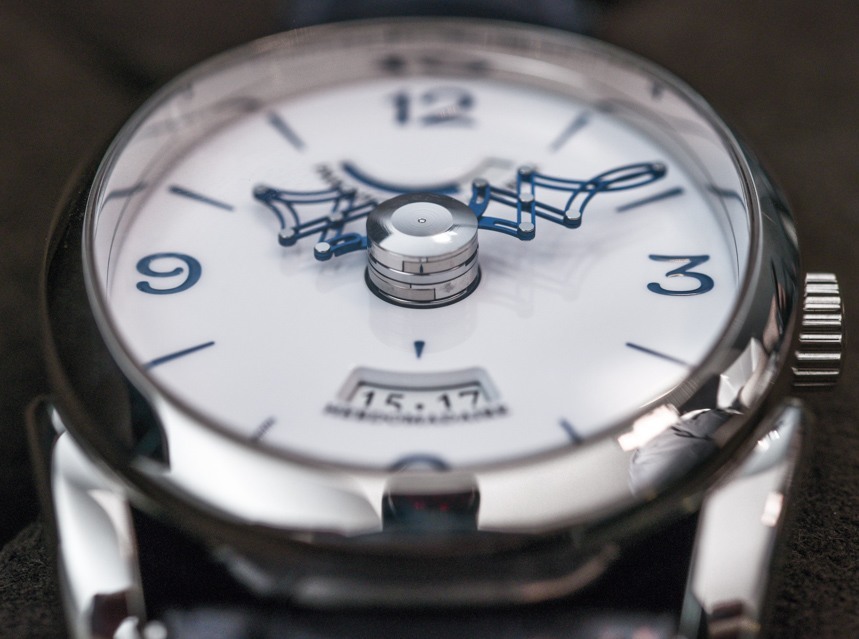 The point of all this? Despite the centuries-old history of watchmaking, having intelligently designed and sized hands remains a challenge for some brands – you know who you are – even when it comes to ordinarily shaped (i.e. round) watches: the hands are often much too small, failing to reach their respective tracks on the periphery of the dial. When it comes to oval or square shaped watches, however, the challenge is exponentially greater, as when one designs the hands to be just long enough for the shorter side, they are still too small for the longer end – and when done vice versa, the hands are too long for the narrower part.

Speaking of centuries’ worth of history, a certain Jardon & Stedmann in fact found a solution for this issue as early as 1800, when they designed and manufactured a pocket watch of oval shape that had a unique set of hands that would track the shape of the dial. An ingenious solution that requires around a hundred different components, and hands that were as light as we can make them today with state-of-the-art technology. We visited a selection of manufacturing facilities of Parmigiani in 2013, and in their restoration department, we saw and filmed the original pocket watch from some 200 years ago. Parmigiani restored it in 1997, and as they told us, it was this pocket watch that inspired them to design the Ovale Pantographe – watch the first half of the video above to see the original in action! 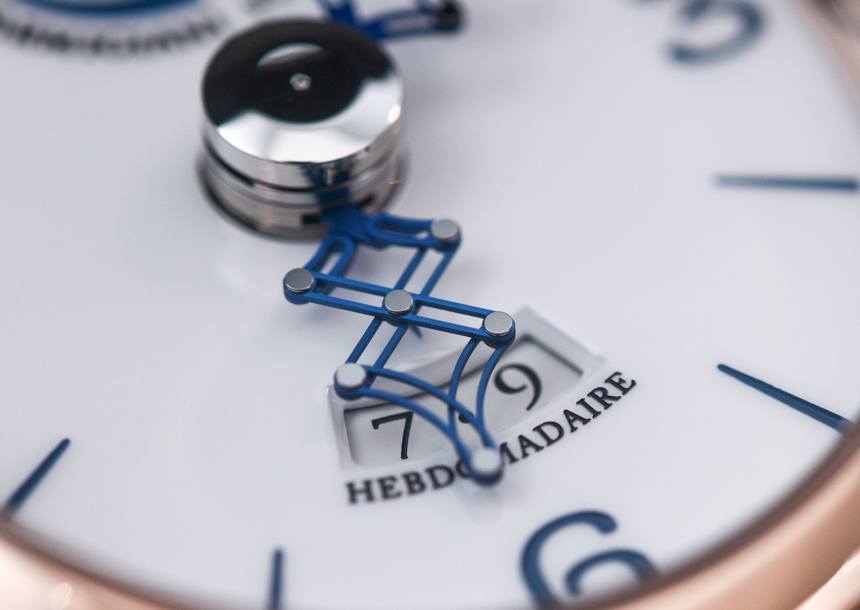 I feel safe in referring to something as ingenious when it, upon first sight, makes me think: “why didn’t I think of that first?” Obviously, Jardon & Stedmann’s engineering achievement is written in stone and something no one can possibly wish to claim their own. Where that “why didn’t I” sentiment comes back into the picture, though, is re-utilizing their invention in a modern timepiece – in other words, I wonder why we had to wait for so long until someone, at last, picked this up and re-created it in a modern timepiece. Anyhow, Parmigiani did, so now let’s see how it works in the 21st century. 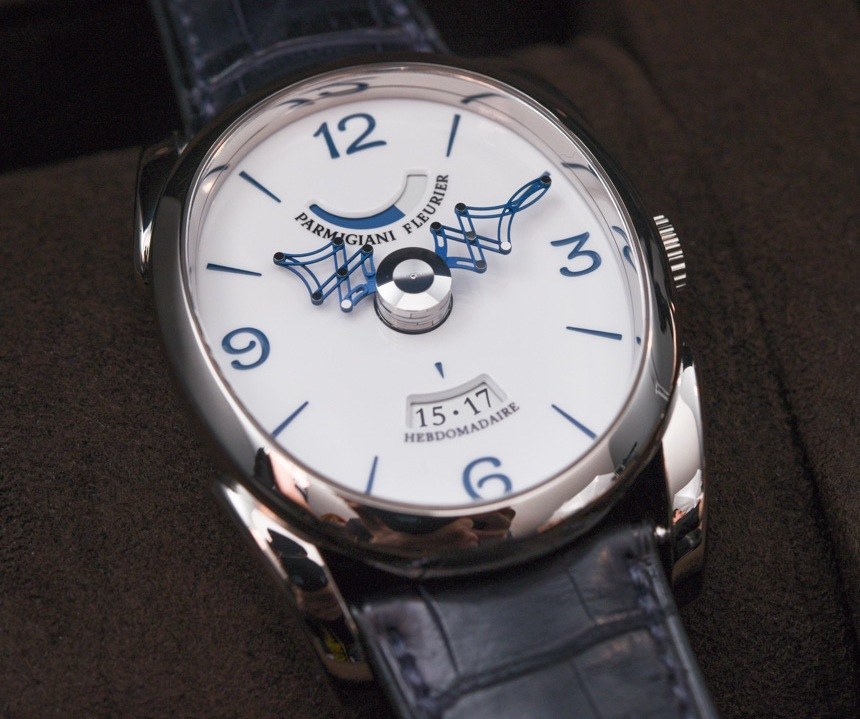 For a moment longer, getting to back to the point of why this all was necessary, I have to elaborate on the oval shape of this watch. Something that I learned to appreciate more, thanks to watchmaking in particular, is the complexity of seemingly simple and straightforward shapes. As many engineers and designers will tell you (from just about any trade), creating an apparently more simple design often is much more challenging than it is to come up with something complicated. The oval shape of the Parmigiani Ovale Pantographe is unobstructed by screws in the bezel or even alternating finishing: it appears to be one of the most simple shapes; something one may be fooled into thinking you can create in MS Paint with the click of a mouse. However, we all know that it is not that simple: getting the proportions of it just right is a painstaking effort and, speaking for myself, I know I could never draw something like this in a thousand years. The oval shape here “just works,” and I believe that must have been as difficult to achieve as it was easy for me to describe it as such. 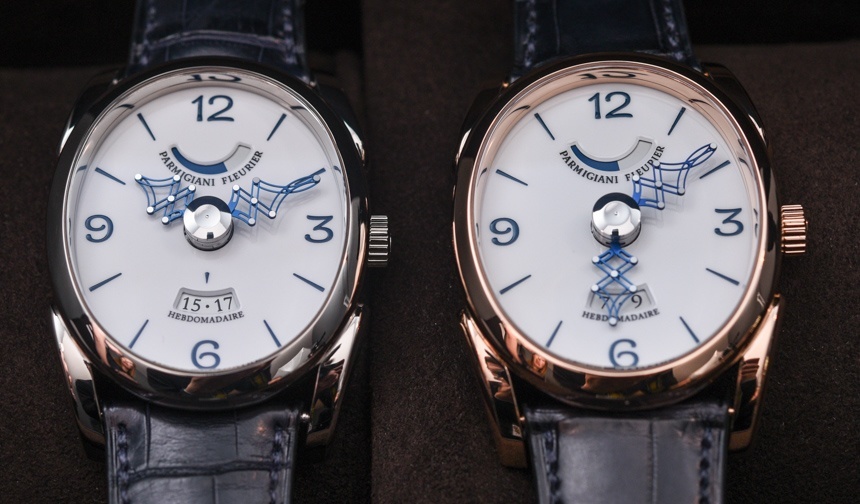 Housed in a 45 by 37.6 millimeter-wide and 12 millimeter-thick white gold or rose gold case, the scene is set for the hands to perform their dance. As Parmigiani explains, “a cam at the centre of the movement determines a certain length which is then replicated a number of times across the entire hand.” In other words, “the shape of this central cam provides the information required to move and adjust the hand as it pursues its course around the dial.” 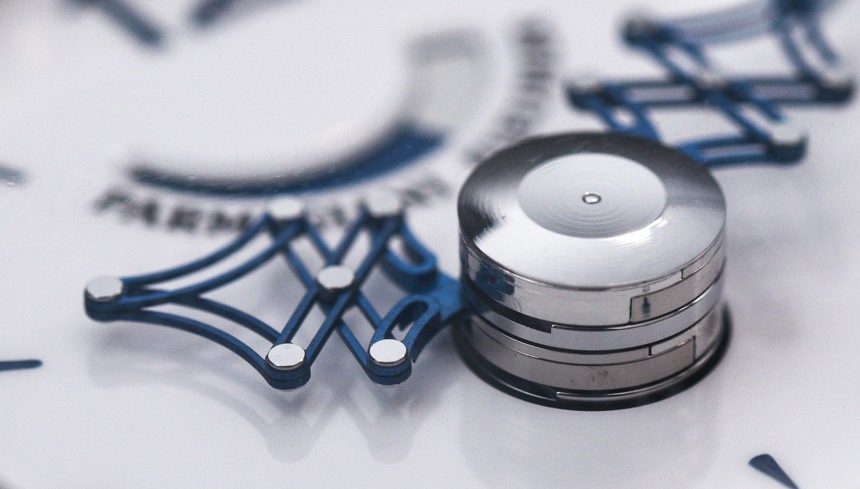 The cam, for those less familiar with such more “niche” terms of watchmaking, is a flat piece of metal with rounded sides. Its periphery is tracked by some other component which in turn determines the action of a hand or other part. The shape of the cam, likely that of the number “8,” is what matters here and is something that had to be calculated with extreme precision. The top and bottom outermost plus the inner “corners” in the center of the “8” determine when the hands will be fully expanded or detracted. What you see from all this engineering is a complex-looking column that contains the majority of components responsible for modifying the length of the hands as they track the aforementioned cam.

The result is a set of two hands which effortlessly get longer or shorter as they reach the further or closer parts of the oval shaped dial. Interestingly, the length of the hands is set in a way that under no circumstances can they be mistaken for one another – this could have been a problem at, say, 3 o’clock, when, had the hands taken up a visually similar length, the reading could be mistaken for 12:15. When the hour hand is at its longest and the minute hand is at its shortest setting, the minute hand still is considerably longer, making it easy to tell them apart at a glance. One of the reasons why I find the idea of pantograph hands so interesting – beyond them looking new and, dare I say, fun – is that every time I look at them I am inadvertently reminded of the countless little invisible details in their construction and execution. 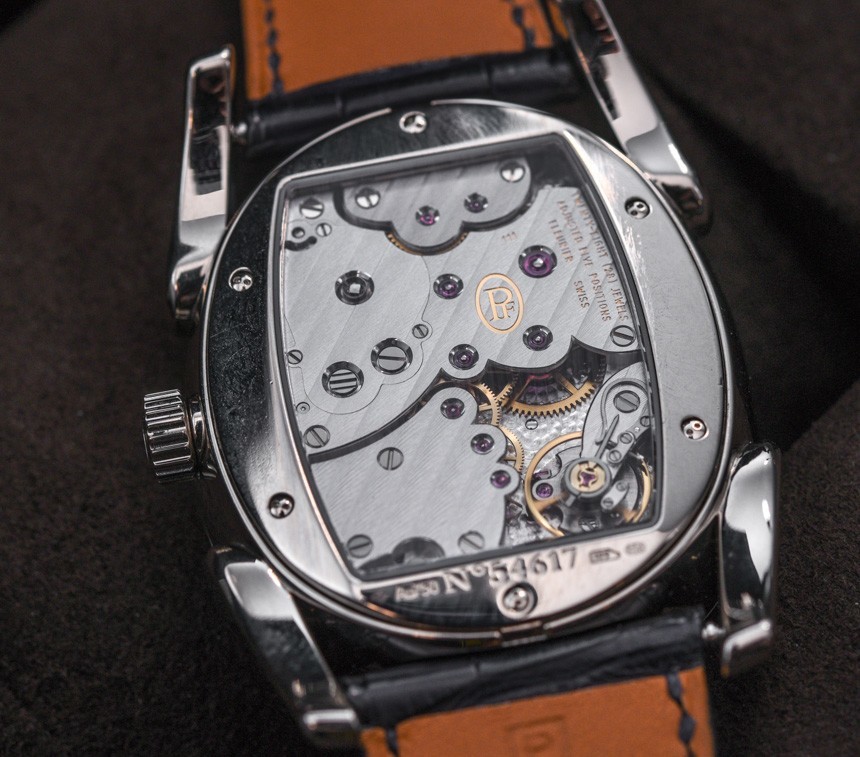 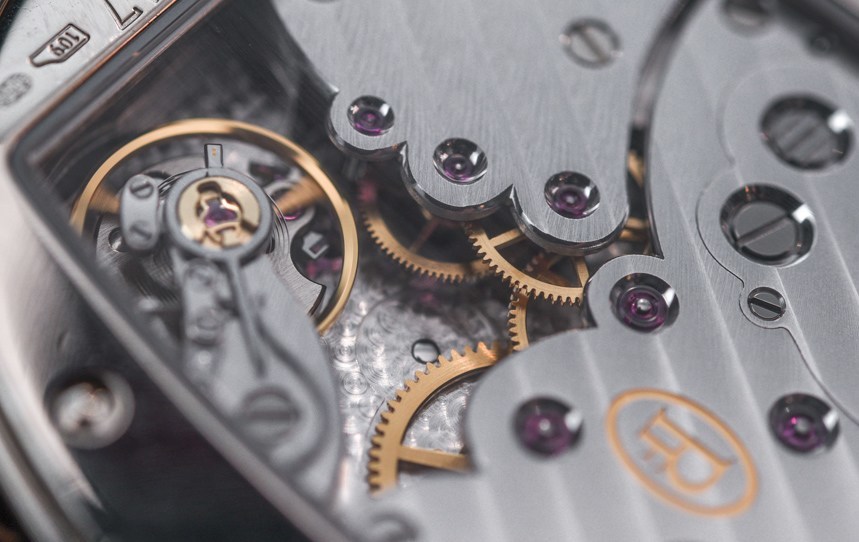 Turning the watch around, we are greeted by an unusually shaped sapphire case back that provides an open view at the PF111 movement. The in-house caliber, unfortunately, does not give away any of the secrets of the pantograph mechanism. What you get instead is not a fancy arrangement of individual cocks (yes, those), but three larger bridges with curvy sides, covering up most of the going train and the two, series-coupled barrels which provide a total of 192 hours (8 days) of power reserve – which, by the way, you can keep track of on the power reserve display on the dial. 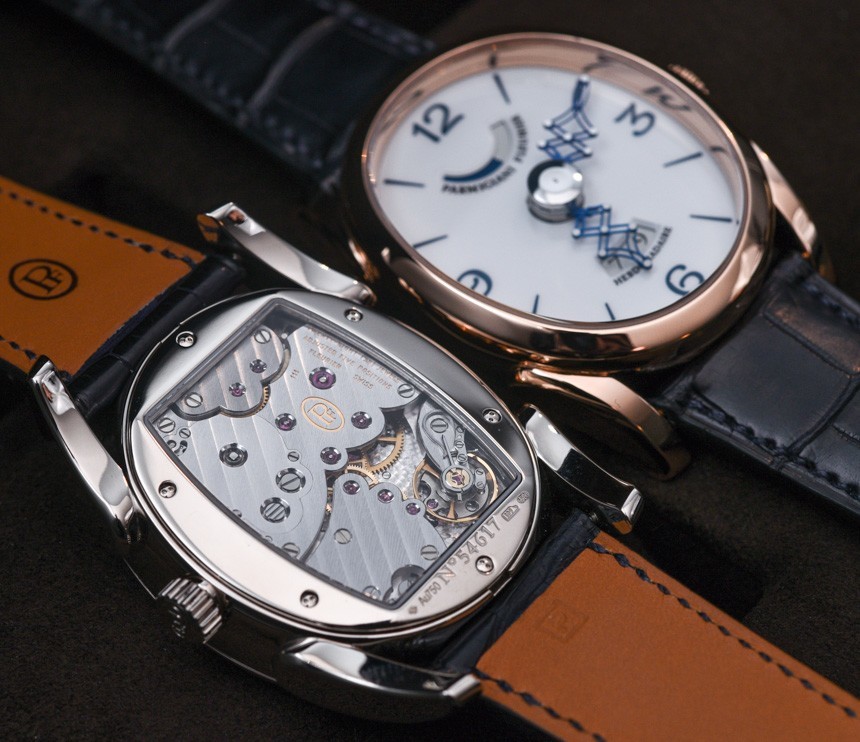 By now we are more or less familiar with the technicalities, and I did begin this report by saying that I wanted to see how the Parmigiani Ovale Pantographe worked as a complete package – and this is where I was most surprised. The long, oval case and its masculine, angled lugs made for a very unusual-looking watch when put on the wrist (where it belongs), and yet one that looked very natural and not a bit out of place. What I have found a number of times with such extensively researched and engineered pieces is that they look amazing in images and even when held in hand, but on the wrist, they look very unnerved – as though they were trying to tell you: “put me back in my glass case!” 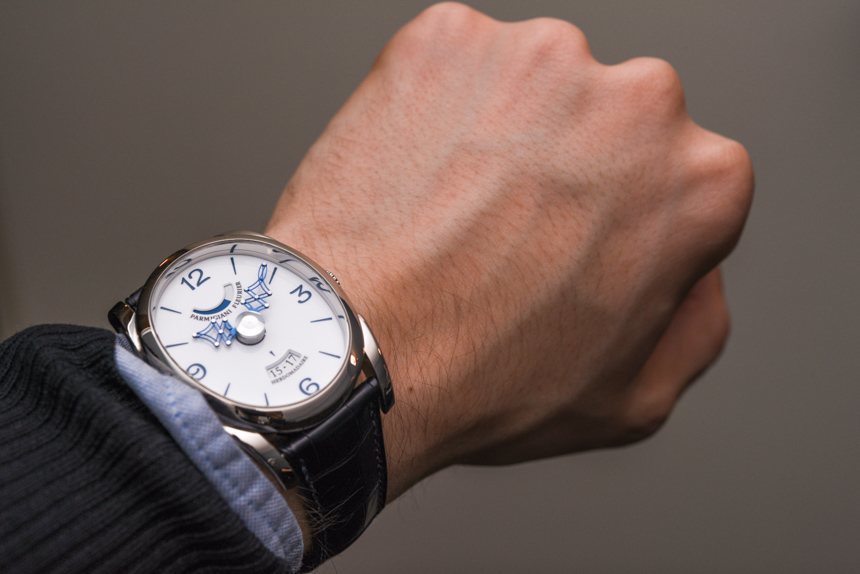 And so what surprised me most is how “at home” the Parmigiani Ovale Pantographe looked on the wrist. While I am sure the overall design – or the oval shape all by itself – is not for everyone, it all made for an aesthetic that I could “bond with” immediately: I felt as though I had had it for a few years already, which explains why it felt so weird giving it back. The large enamel dial with its highly legible painted blue indices make for a simplistic backdrop for the fancy hands – on previous versions Parmigiani opted for a hobnail dial (and indeed a less complicated hour hand), and I am glad to see the busy dial swapped for the non-limited production version, which we are seeing here. 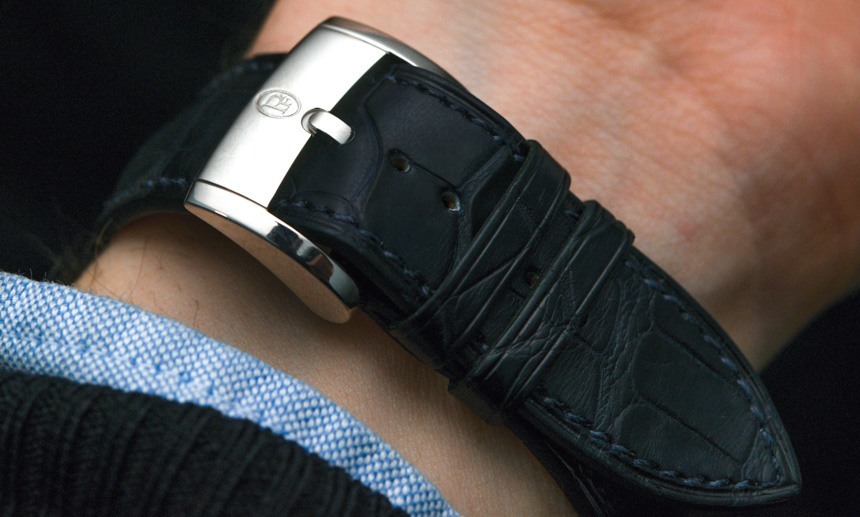 While the triple-date aperture always is an objectionable design choice, I feel the dial would have been empty without it – although replacing it with a running seconds just above the six o’clock position would have been the cherry on top, arguably making it even more of a watch lover’s watch. The Parmigiani Ovale Pantographe comes on Hermès alligator straps with tang buckles – a no-nonsense combination that made for a comfortable fit, something I am getting used to consistently experiencing with Parmigiani watches.

“Zooming out” once again for an overview of the Parmigiani Ovale Pantographe, one of the gripes that one may have with its centerpiece complication is that it is a rather passive one. What I mean by that is that, in a way, the pantograph hands are similar to the perpetual calendar (or any other astronomical complication, for that matter): it is technically impressive, you know it is in there and doing its thing, but in a way, it is not as visually pleasing as the spinning action of a tourbillon or the ticking of a chronograph’s seconds hand. The transition in between the sizes of the hands is seamless, doing away with any “snappy action.” Like with calendars, jumping hours and other similarly “passive” complications, you have to mess up the displayed time and fiddle with the crown to illustrate what the trademark complication can do – despite the fact that it was doing its thing as it should anyway… just not in a very visual way.

By contrast, the mind-boggling construction of the hands is a sight to behold and is a constant reminder of the engineering prowess that is present (and hard at work) in the Parmigiani Ovale Pantographe. And with that, we have arrived to a point where this seemingly straight-forward and yet, in many ways, greatly (and very positively!) surprising watch can be concluded: the Parmigiani Ovale Pantographe is an extremely niche product that, like most fascinating watches out there today, solved a problem no one really bothered to even consider – let alone solve at a price of such excessive effort and cost. For that, and for its wonderful overall design, I genuinely like the Parmigiani Ovale Pantographe – I just wish my wallet could say the same about the $55,000 asking price for either the white gold or rose gold version. parmigiani.ch