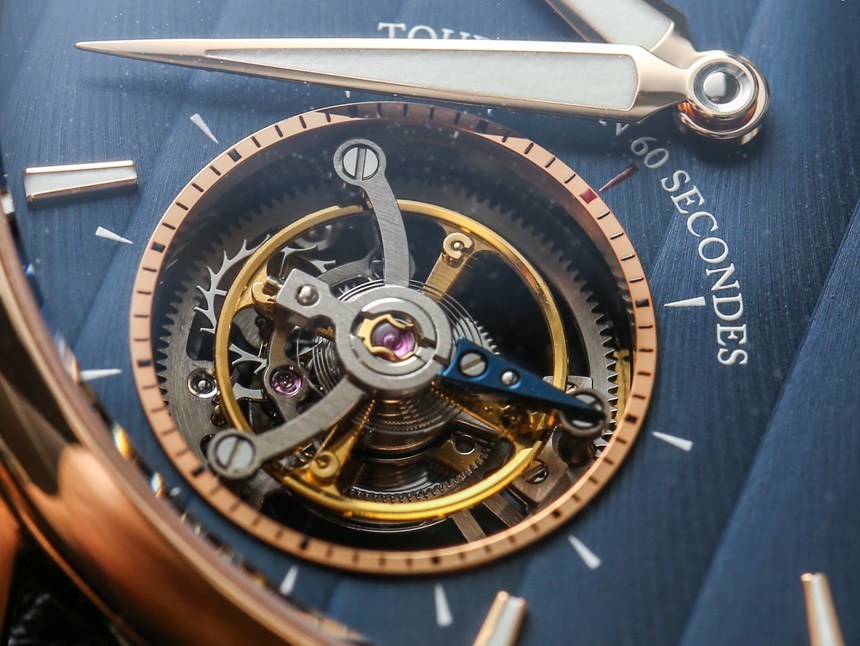 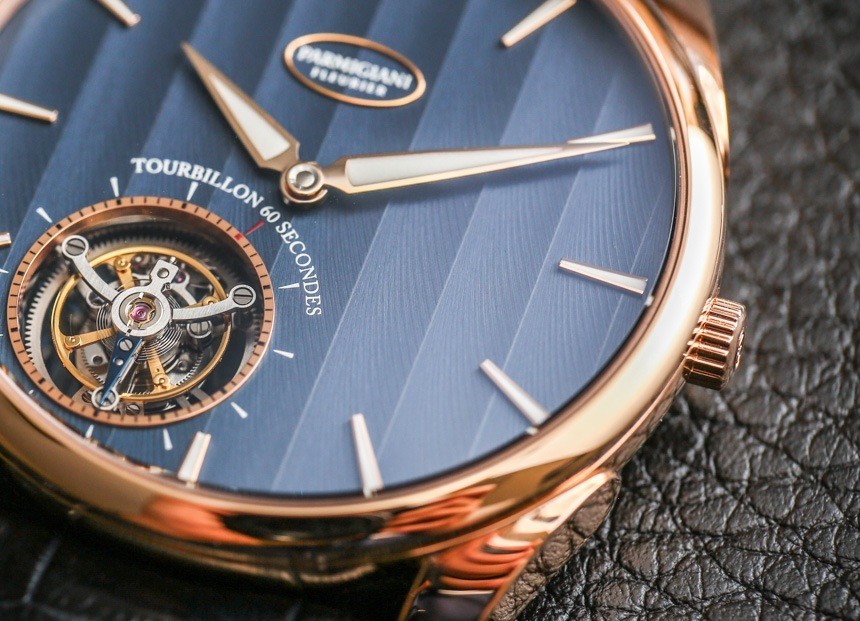 Is it a good or bad thing that while wearing the Parmigiani Tonda 1950 Tourbillon I more or less forgot that there was a $100,000 plus timepiece on my wrist? On the one hand, it is probably heretical (to the watch gods) to wear such a valuable horological item on my body and treat it with the delicate deference it is due. Its true, I just wore the Tonda 1950 Tourbillon (debuted here on aBlogtoWatch) like it was any other comfortable dressy watch. On the other hand, perhaps it is a true testament to the simple refinement and convenience of the watch that I was not constantly reminded of its status and pedigree. Often times, while wearing other such expensive watches, something about their design or appearance makes me constantly aware that I have something “different” on. With the Tonda 1950 Tourbillon I’ve finally found one of those rare luxury watches that is more than happy to “slum it” a bit and be comfortable whether I wear it casually or in a high-profile setting. 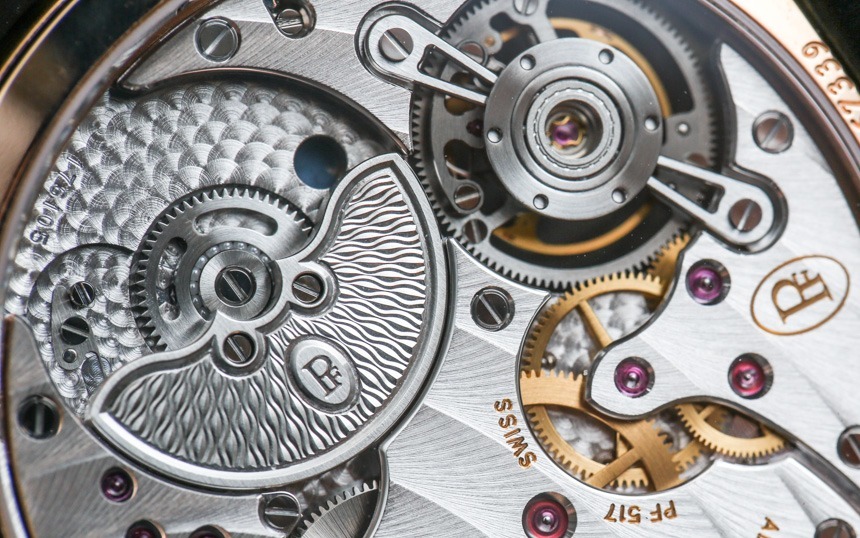 The Tonda 1950 Tourbillon is an extension of the original Parmigiani Tonda 1950 that was released in 2010, and if reports are to be believed, remains one of the brand’s strongest sellers in the men’s watch category. That is, of course, despite the fact that the Tonda 1950 is very much a unisex watch at 39mm wide. There are even plainly designed women’s versions. Now, the Tonda 1950 Tourbillon is just a bit larger with a case that is 40.2mm wide and about 1mm thicker. I must say that even this modest increase in size allows the watch to be very low profile, but also undeniably a man’s watch – at least in this style. 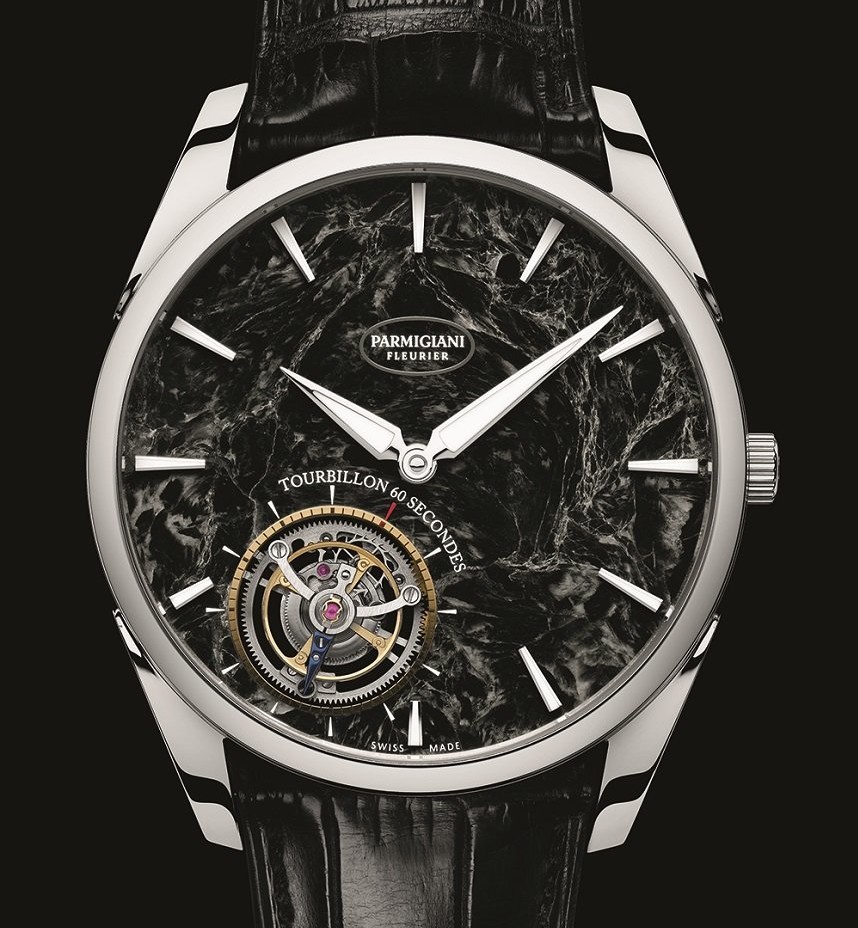 A different version of the Parmigiani Tonda 1950 Tourbillon, seen here with a black jade dial

There are a few things you should know about this particular Parmigiani watch. Firstly, is that from the outset, Parmigiani decided to release a number of different dial versions – check the gallery at the end of the post to see more. These all use the same hands and hour markers but the dials themselves are totally different. Some models feature rock and other natural minerals and this model features a blue-toned metal dial with vertical Cotes de Geneva stripes. Secondly, is that as of 2015, the Parmigiani Tonda 1950 Tourbillon is the thinnest automatic flying tourbillon watch in the world. 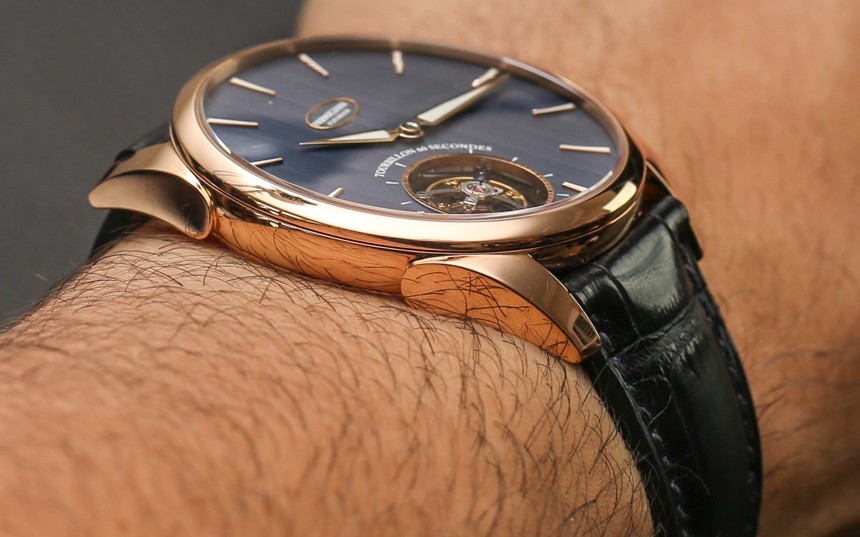 That sounds impressive but, honestly, I don’t care. If it was the second or third thinnest automatic flying tourbillon I would have been just as happy. That statement is the most useful for sales people trying to impress customers, as well as for owners of the Tonda 1950 Tourbillon who want something to share with their friends as they take off the watch and hand it over to let others inspect it. There will always be a fascination with superlatives in the watch industry, but the fact that the Tonda 1950 Tourbillon is a thin, light, and comfortable tourbillon-based watch is much more important for me… and that it is. 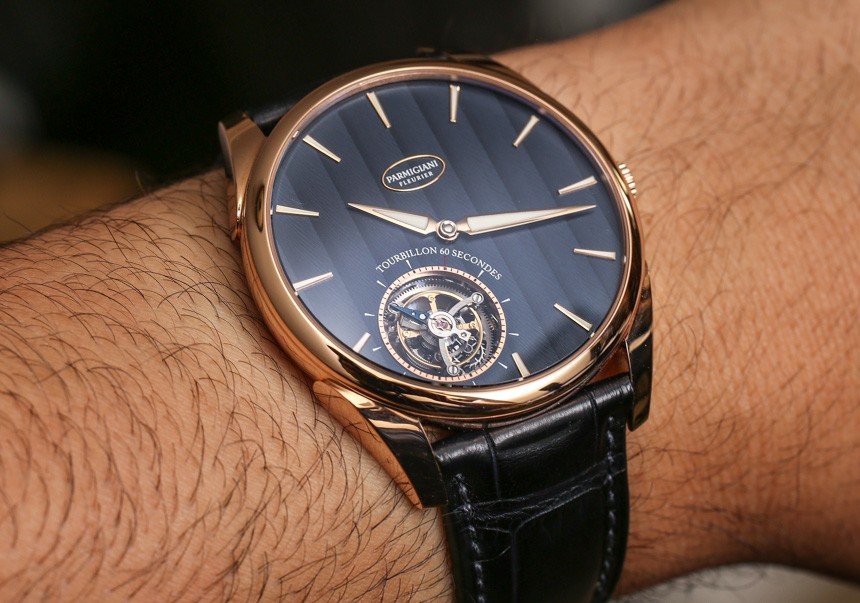 I’ve probably never enjoyed wearing a tourbillon-based watch so much as this puppy. Trust me, I spent a lot of time thinking about why that is. Honestly, the watch is very simple. It has an attractive, if modest, 18k rose gold case with some welcome brand character, a time-only convenient automatic movement that doesn’t need constant attention, and that exposed flying tourbillon on the dial that says to the world “he who wears this watch has money and enjoys spending for fine things.” 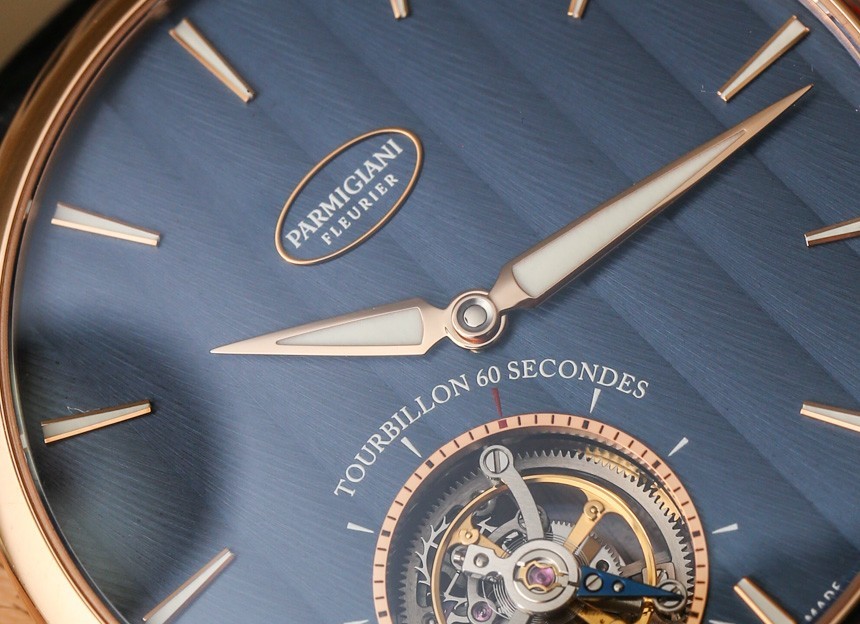 Parmigiani fundamentally altered the character of the Tonda 1950 concept by positioning the tourbillon window eccentrically to left-side of the dial as opposed to dead center over 6 o’clock (such as where the subsidiary seconds dial is on the Tonda 1950). This was done because the tourbillon window is a bit too large, but it adds an interesting element to the overall composition. Yes that element is asymmetry, but it is just one very meaningful asymmetric element on an otherwise symmetrical design. That element calls attention to itself, and it happens to be a cool spinning exposed mechanical element that, to the right people, says “money.”

Legibility is fantastic and I love that, despite the Tonda 1950 Tourbillon being a dress watch, it also has lumed hands. How many other tourbillon-based watches have luminant on their dials? Some, but really not that many. Parmigiani designed the Tonda 1950 Tourbillon to be a daily wear, to work in various situations, and to never be the type of watch that causes a hassle for its wearer. That is actually the type of luxury I like. The type of luxury that says “this item, while expensive, works well in your current lifestyle.” The opposite of course is “in exchange for having this expensive item you need to change your lifestyle to better suit it.” That latter statement certainly applies to many other luxury timepieces at this price level (and of course higher). 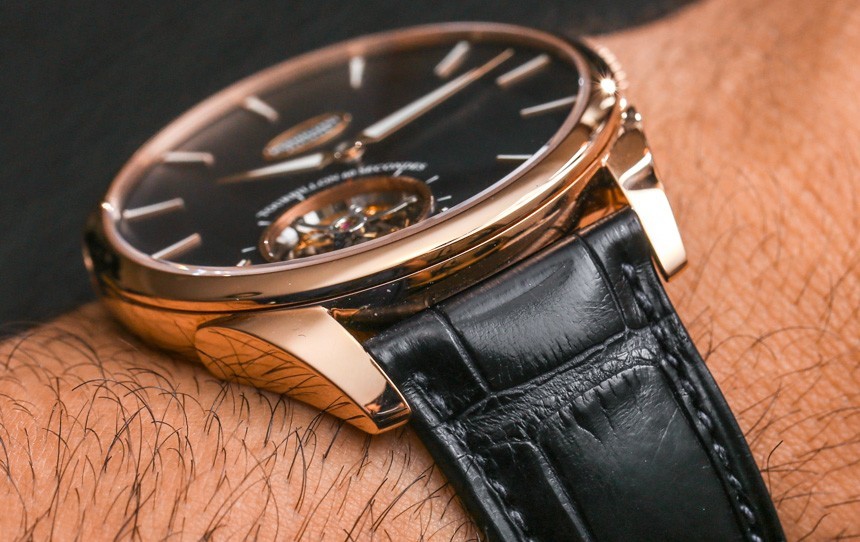 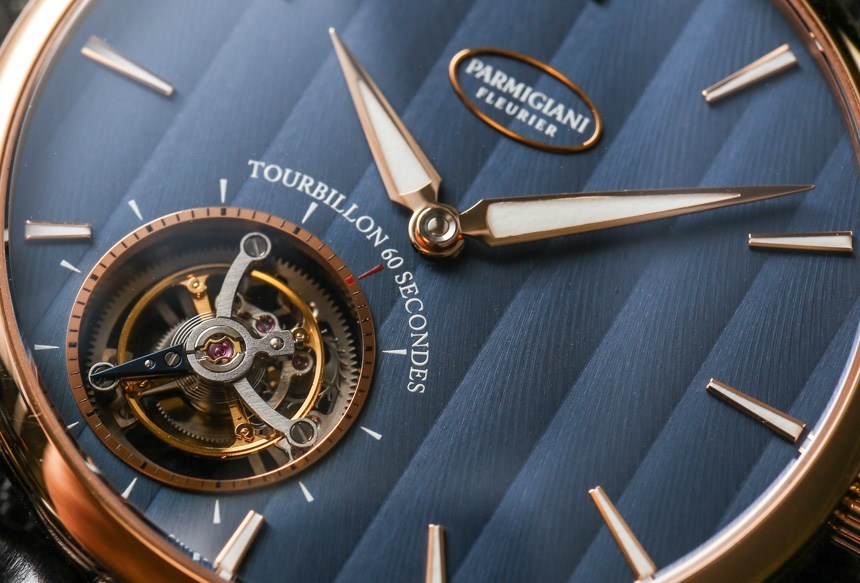 Let’s talk some numbers. I mentioned that the Tonda 1950 Tourbillon case is 40.2mm wide. It is also 8.65mm thick and the curved lugs make the case appear to wrap around your wrist. With 30 meters of water resistance I would not take the watch for a swim. Inside the case is the in-house made Parmigiani  caliber PF517 automatic mechanical movement. Produced from a relatively scant 205 parts, it operates at 3Hz (21,600 bph) and has a power reserve of 42 hours. 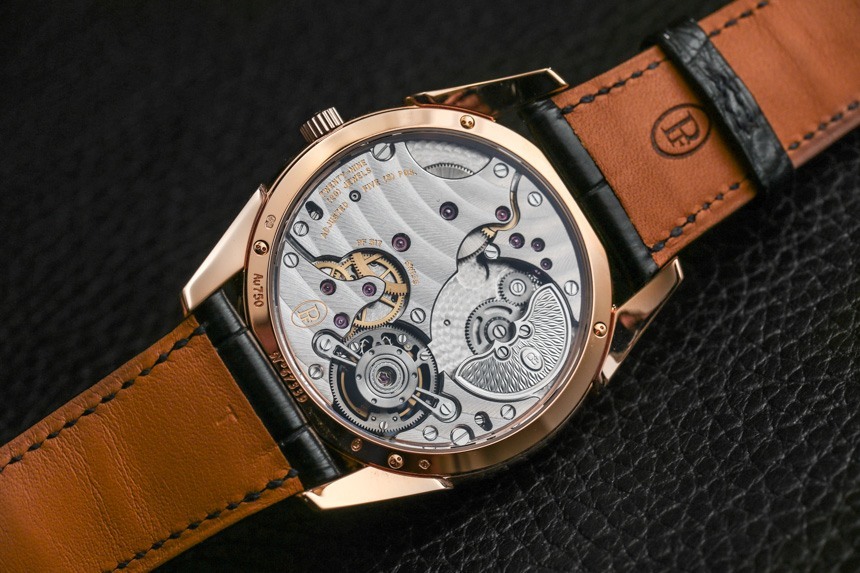 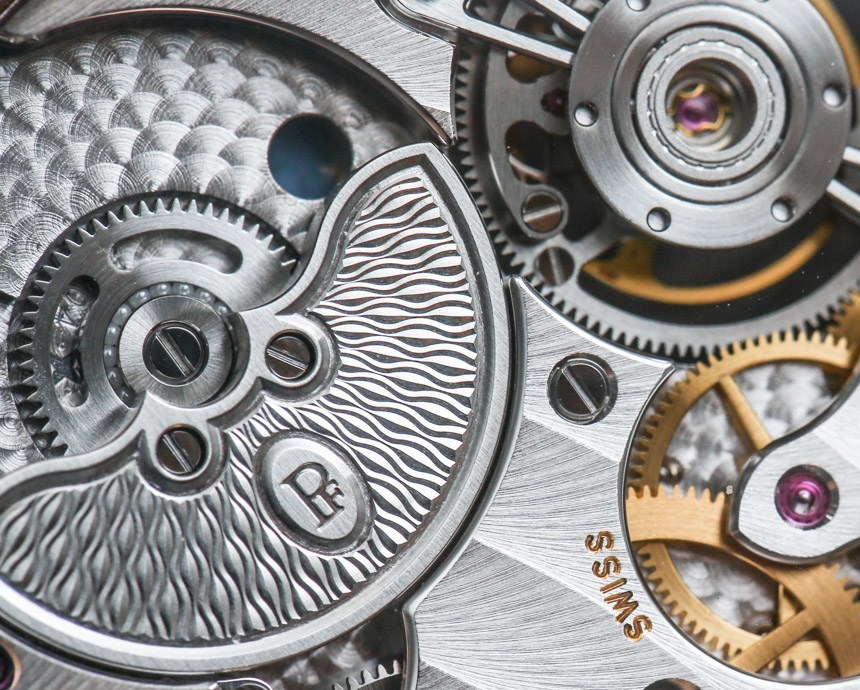 The caliber PF517 is 3.4mm thick and extremely beautiful in its decoration – something I’ve always come to appreciate from Parmigiani. Turn the watch over and through the sapphire crystal caseback window you can really appreciate the finely hand-finished bridges and great polishing.  In order to keep thickness down, the movement uses a micro-rotor that has some cool machined decor on it. This also allows you to view the movement much better than if a larger rotor was over the movement. 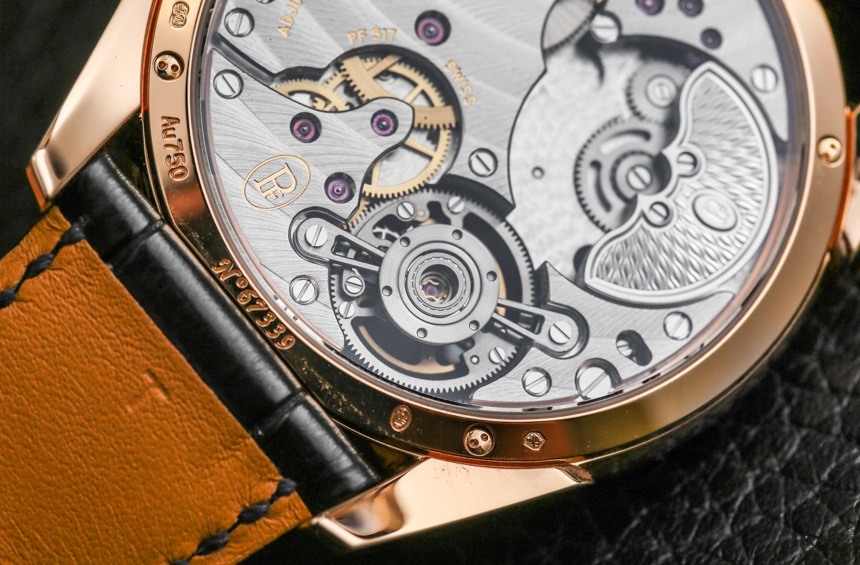 One minor complaint about the movement is that you can audibly hear the rotor spinning when you move the watch around. This is something that many people like, but I personally prefer my watches to be as utterly silent as possible. It is common for people to hear the ticking that comes from mechanical movements when near them. Sometimes you need to be very close to them. Other times people can hear a mechanical watch operating from a few feet away. Again, this is a good or bad thing depending on your preferences. For me this isn’t a big deal but the sound of metal moving on metal in a watch when I jerk my hand around is not my ideal notion of what a luxury timepiece should sound like.