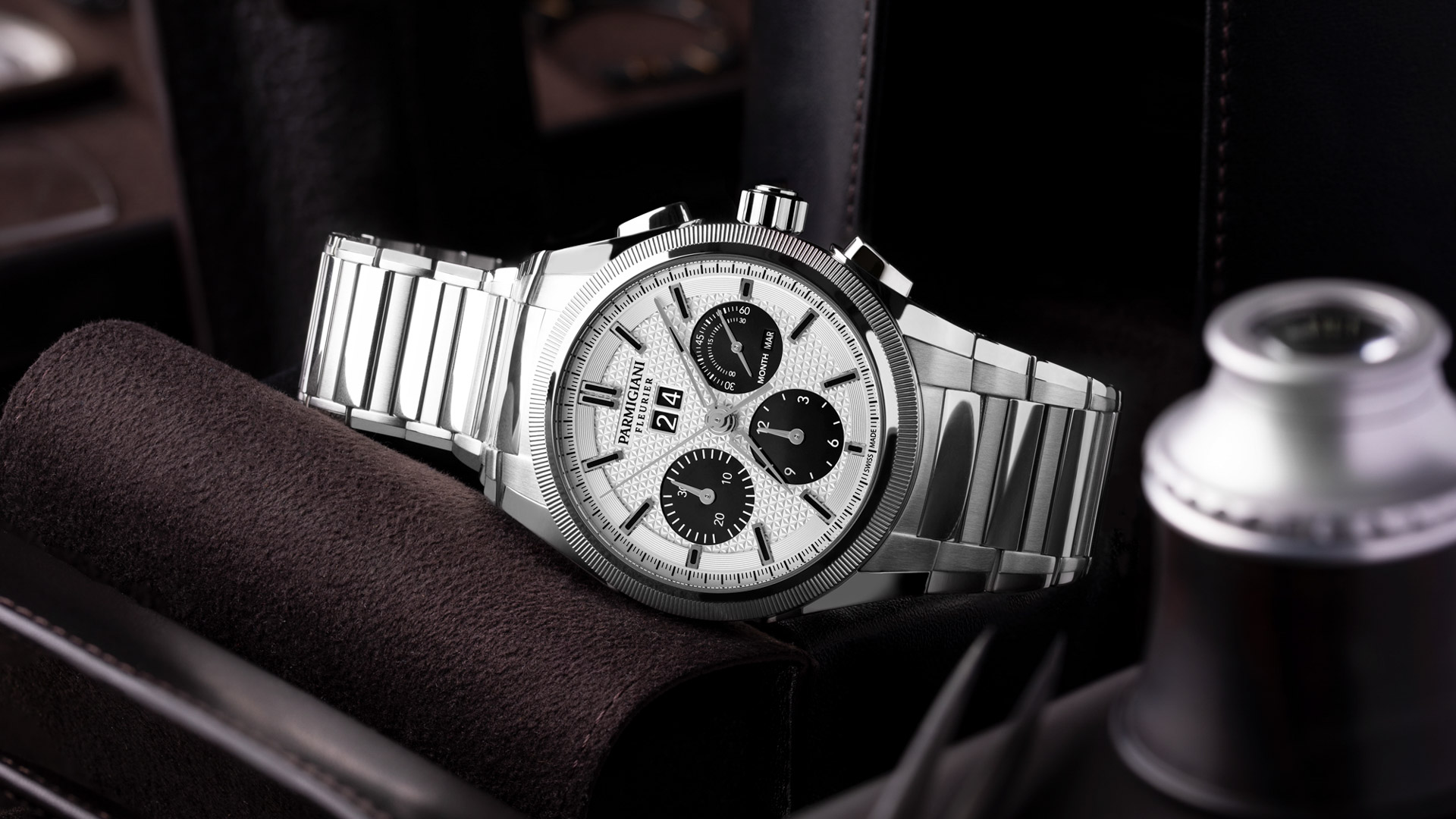 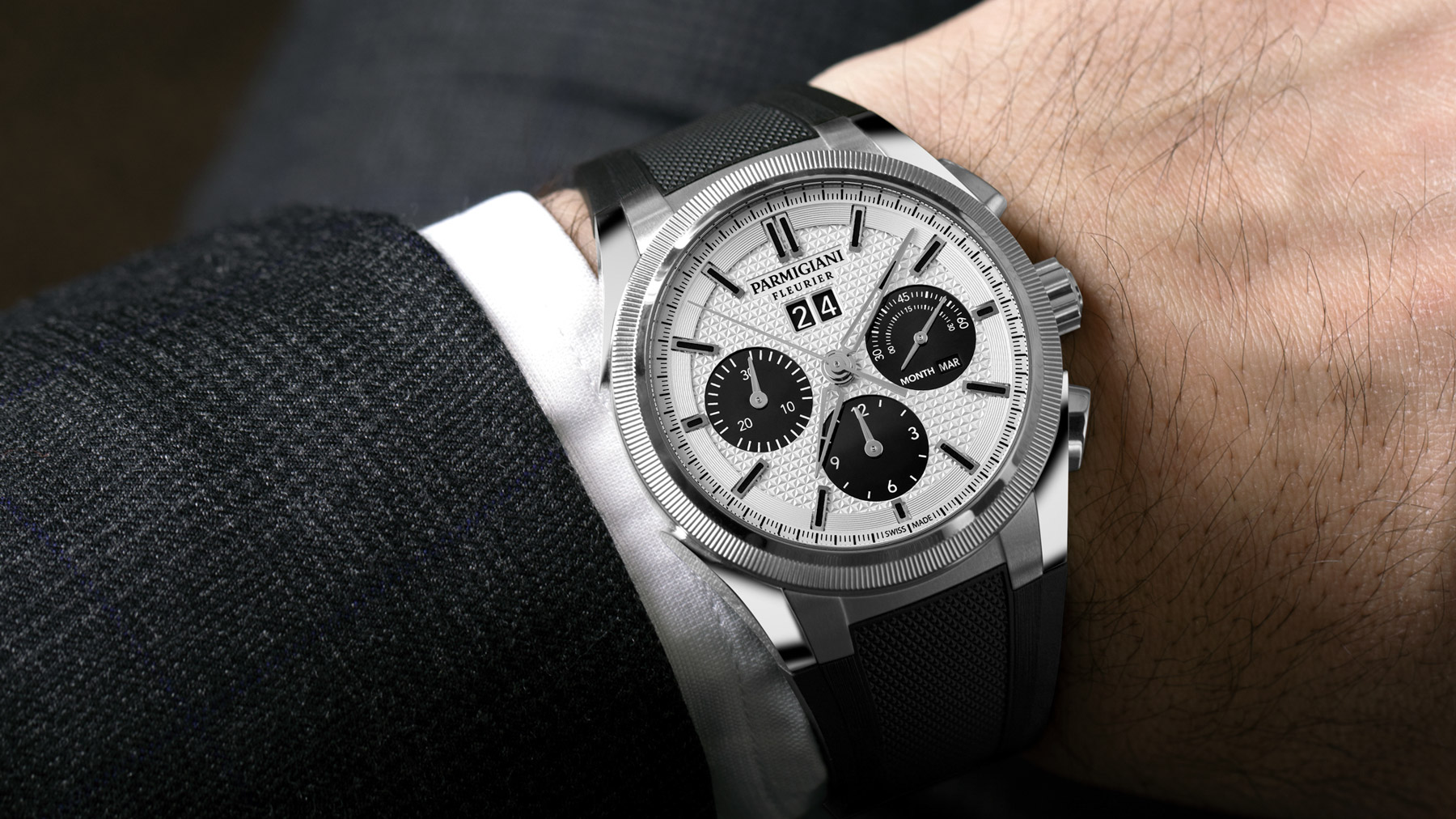 Last year’s debut run of the Tondagraph GT Annual Calendar Chronograph came in a dark, almost slate-gray dial with polished steel hands and indices that got a dash of color with the use of orange on the annual calendar functions. These new versions feel a little fresher mostly due to the fact that a dark gray dial can only be so lively, but the silvery-white dial pops and contrast nicely against the black subdials and indices. Also, perhaps it’s just because I haven’t handled these new Tondagraph GTs in the metal, but the circular pattern and guilloché “clou triangulaire” on the dial seem more pronounced on this lighter background. 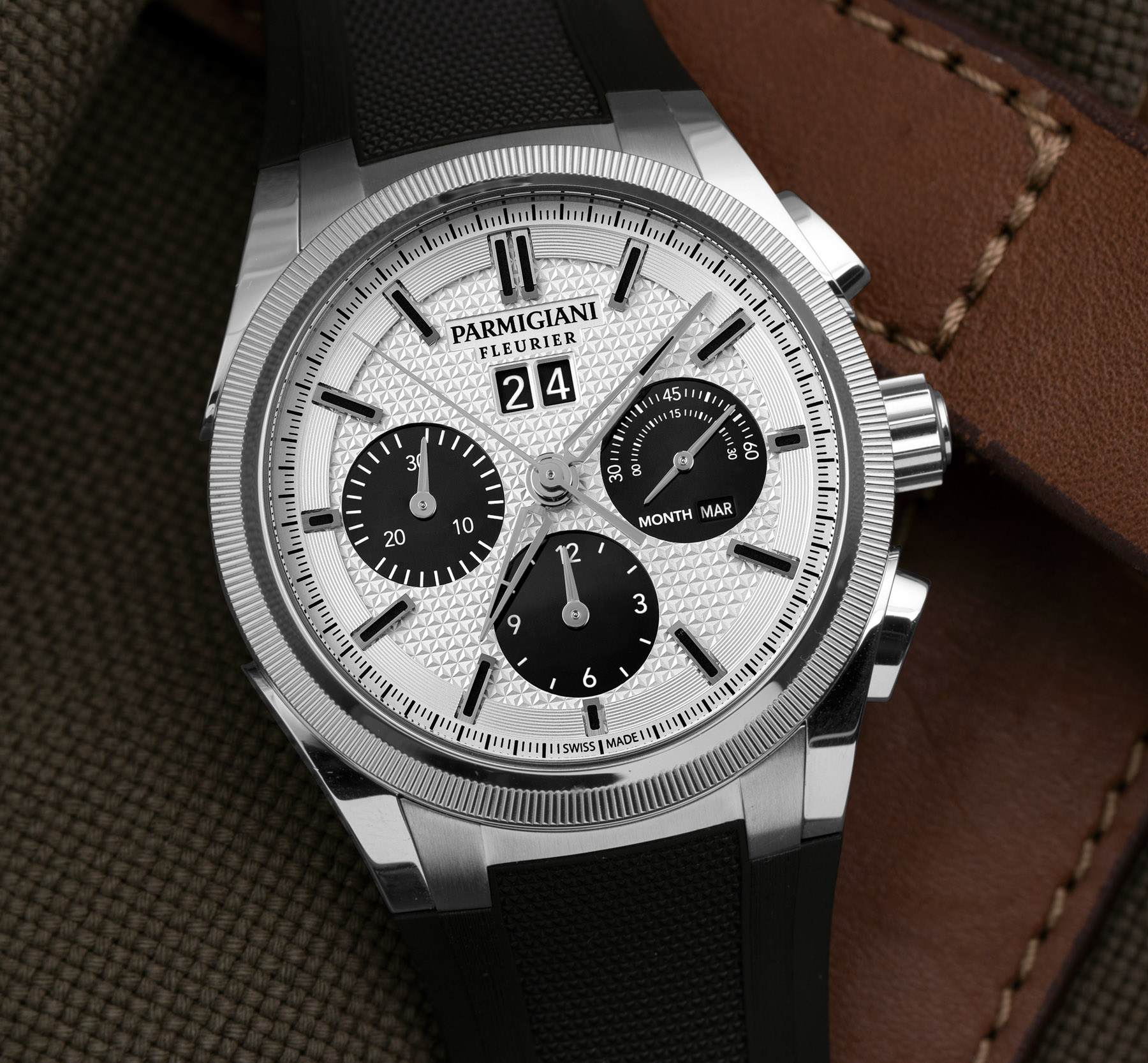 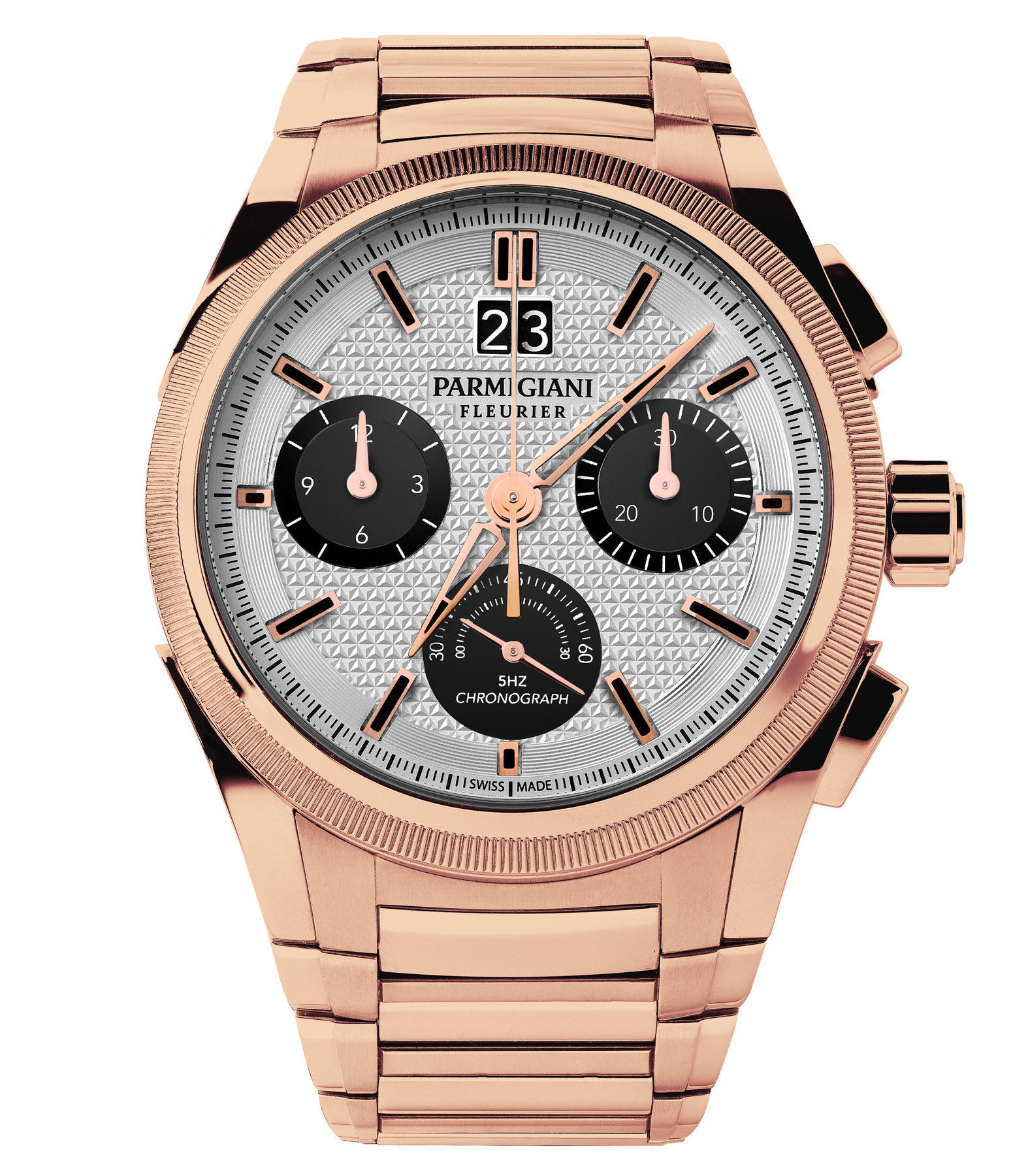 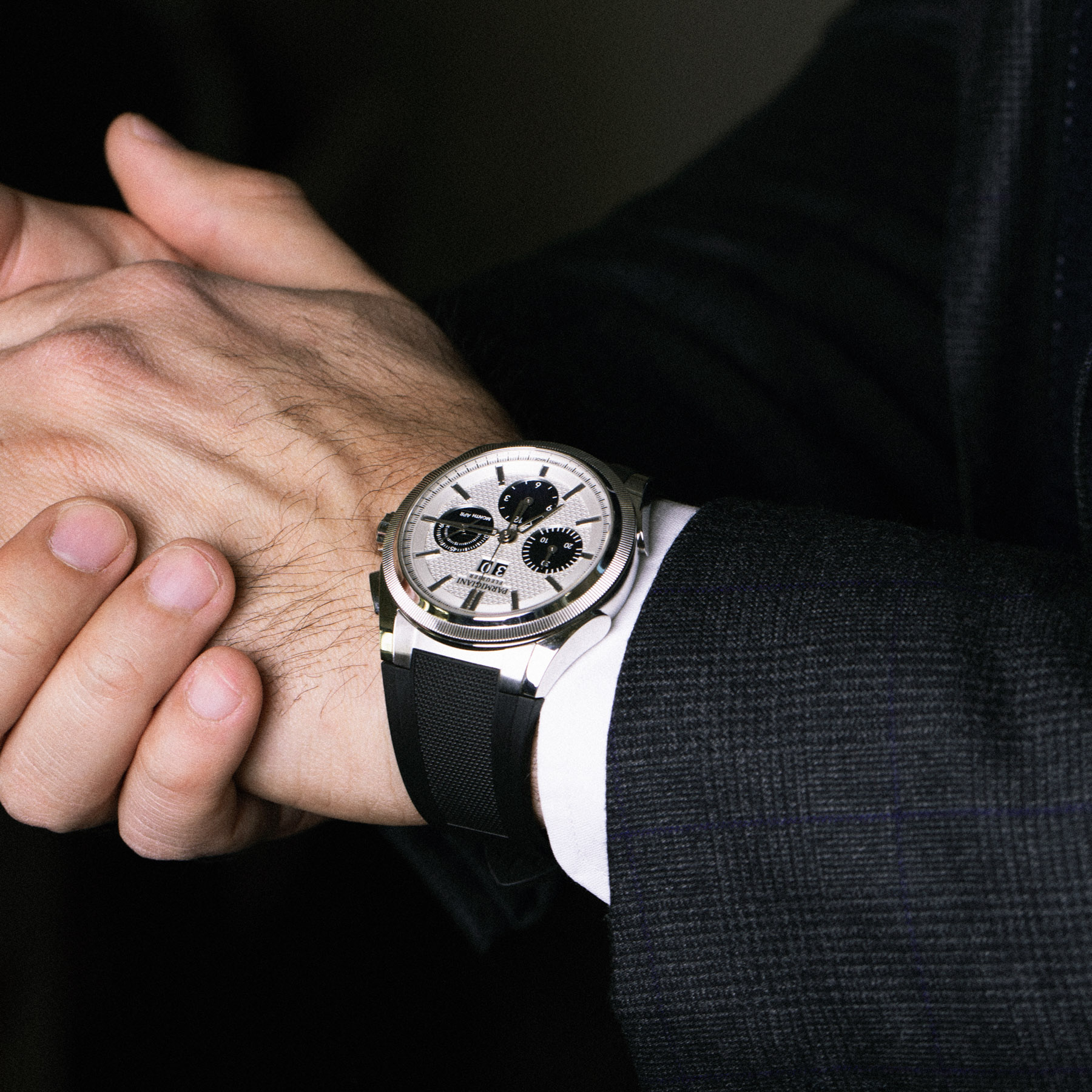 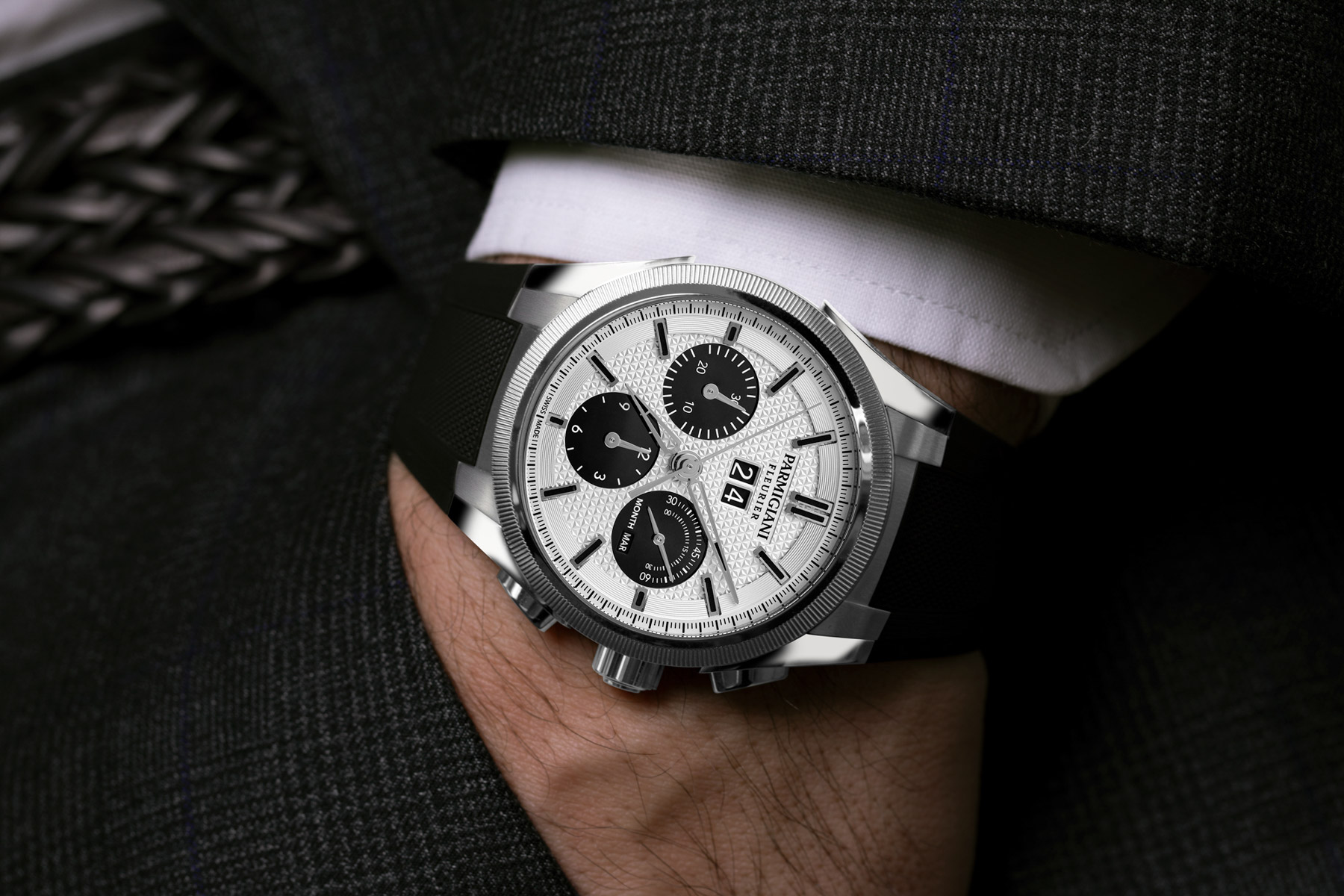 Removing the orange touches was an obvious choice here, as it would look totally out of place and …derpy. One design flaw I worry about is that the signature skeletonized Delta hands may not be as legible against a light background (unless perhaps the hands are mirror-finished). I’d have to see it in person to confirm but I suspect I’m right. That said, the black lumed tips of the hands do help quite a bit. Beyond that, my main criticism of the design would be that the “Month” text at the 3 o’clock subdial is still unnecessary. Removing “Annual Calendar Chronograph” from the 6 o’clock subdial was a great first step, though, so credit where credit is due.

As a brand that is new to sports watches in general, let alone panda dial chronographs, Parmigiani has done an impressive job creating something contemporary while retaining that Michel Parmigiani design language. 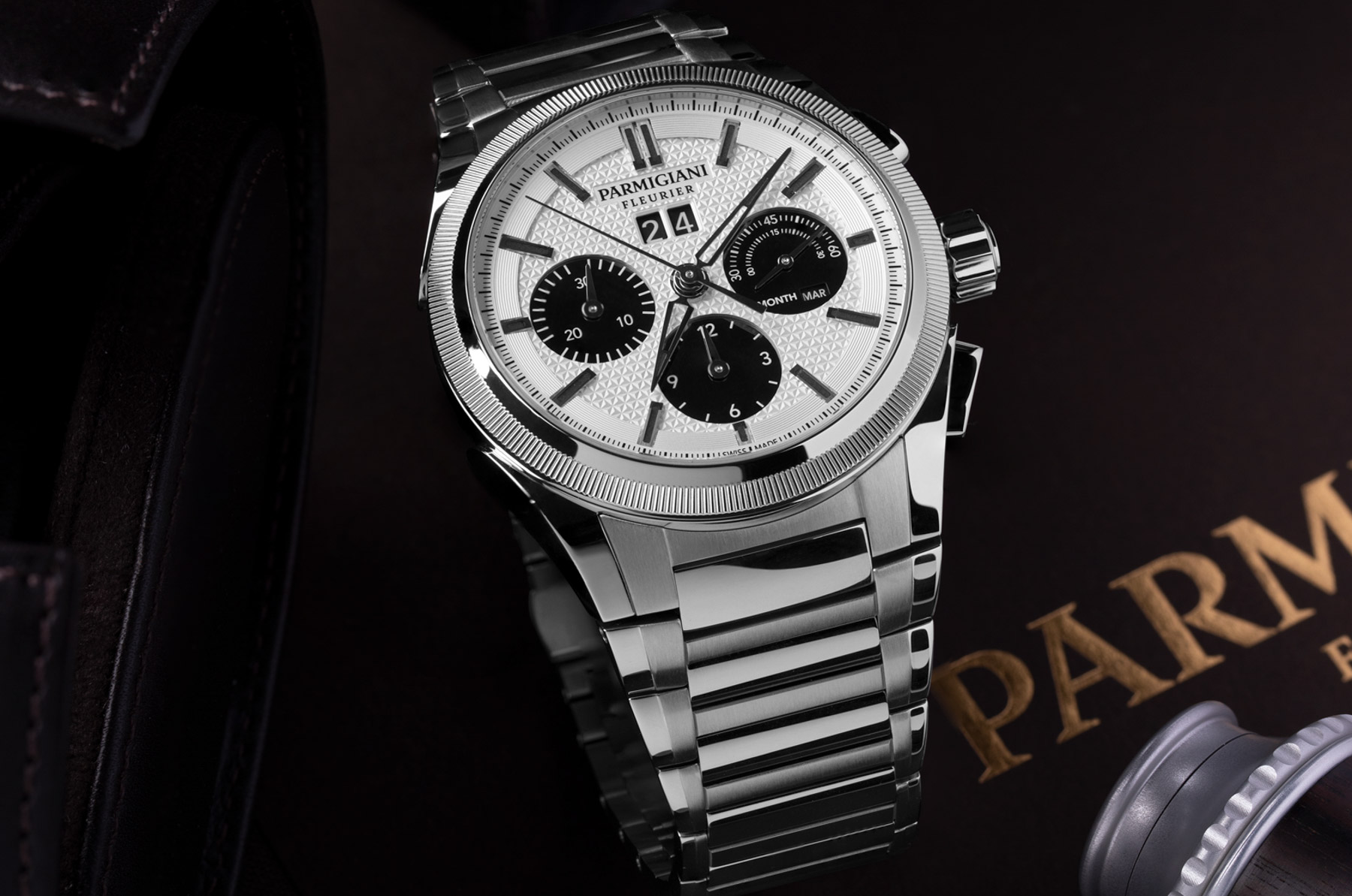 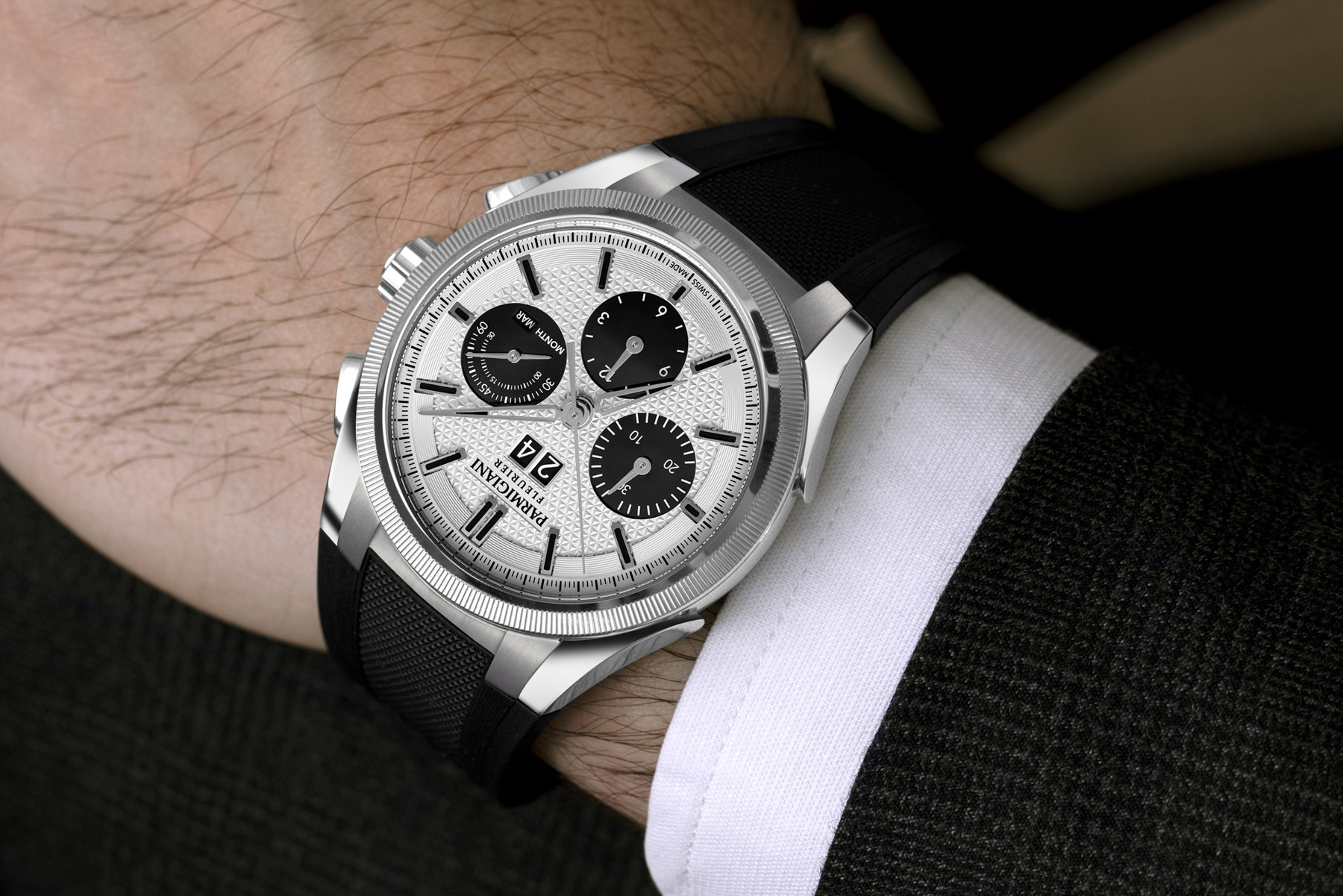 Other than these dial changes, the Parmigiani Tondagraph GT Annual Calendar Chronograph remains the same watch that was debuted last summer in 2020. The case measures 42mm-wide and 13.7mm-thick with a lug-to-lug height of 46.9mm. The classic Parmigiani teardrop lugs and pushers, along with the fluted bezel, make for a beautiful sports watch that is shy of eccentric while not mistaken for anything else; 100m of water resistance is more than sufficient, as well. 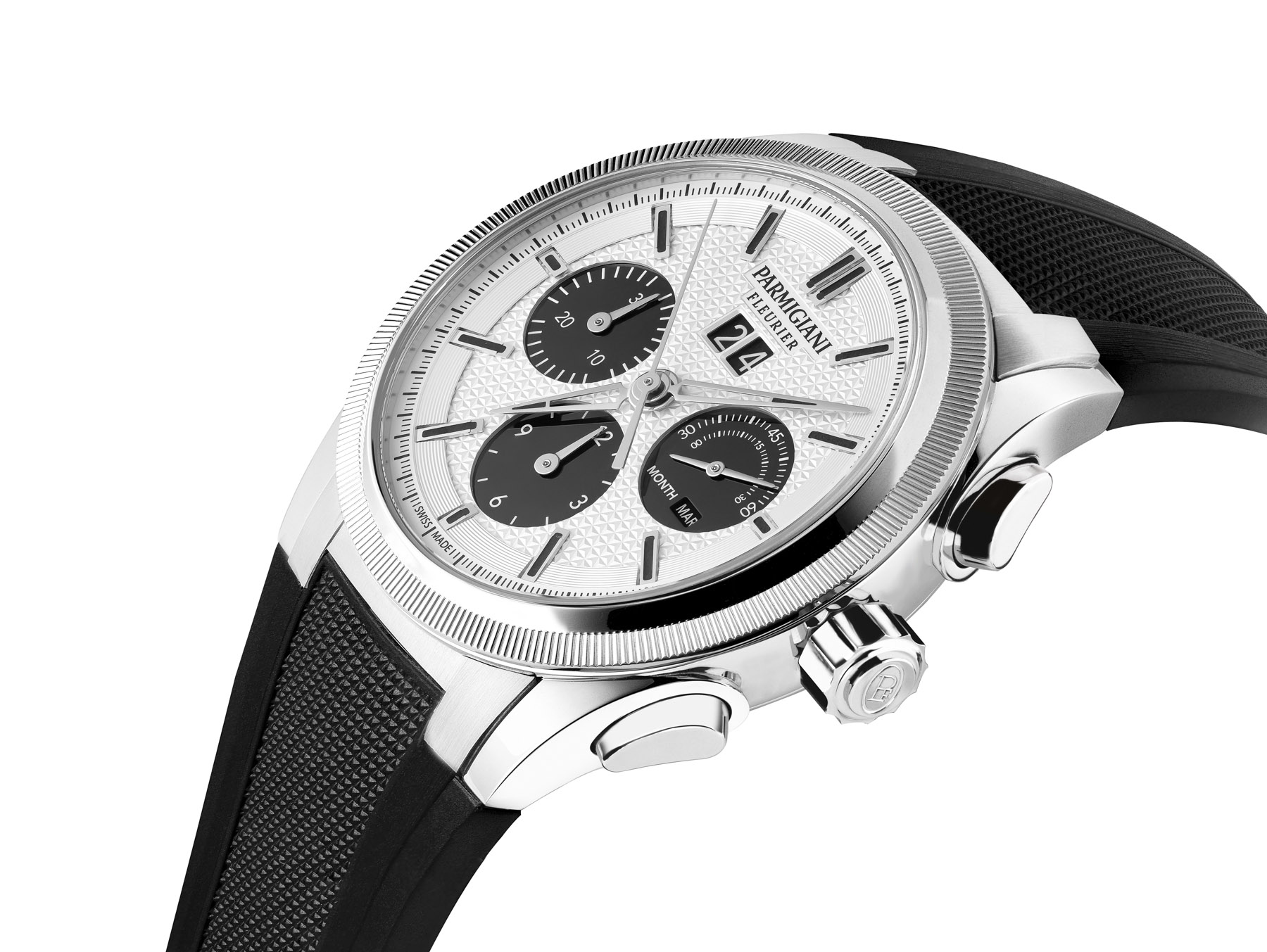 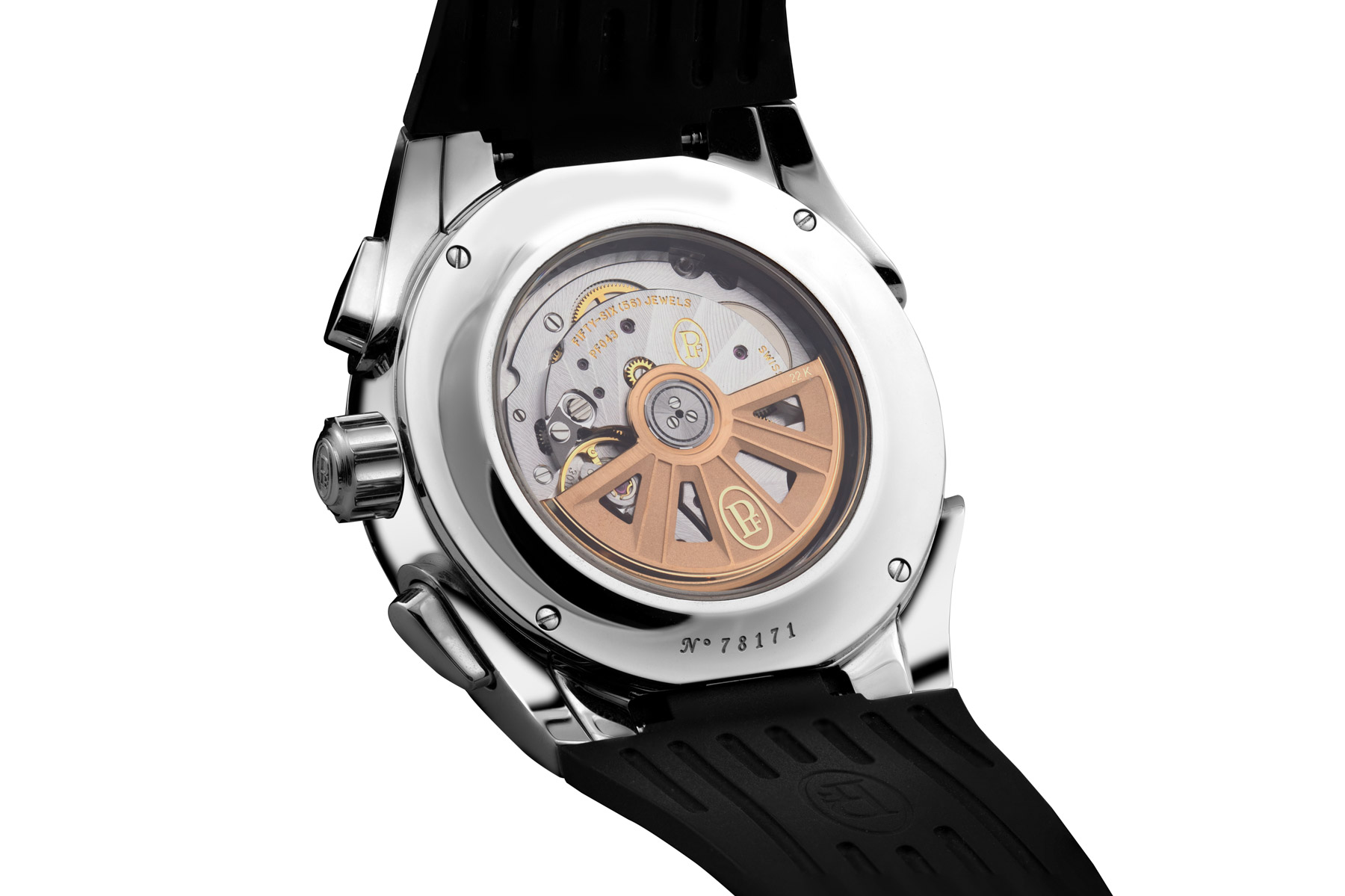 Watches with both an annual calendar and a chronograph are very rare (the few I’ve seen have been from Patek Philippe, Ulysse Nardin, and Richard Mille) so the Tondagraph GT isn’t just hopping on the sports watch bandwagon. This watch has serious horological chops (especially at this price) and is outfitted with the PF043 movement which is the result of adding a module to the PF334 movement. Finished with Geneva stripes and a 22k gold rotor. Composed of 443 parts, the PF043 operates at 28,800 vph and has a 45-hour power reserve. As I wrote when the first Tondagraph GT debuted last year, “For a watch like the Tondagraph GT,  you are not going to get the robust annual calendar that you would in a piece like the Tonda 1950 Annual Calendar, which is also considerably pricier. Cost aside, these more elaborate annual calendars are operated by using inset pushers that are going to compromise the water resistance. Also, you need a tool to operate inset pushers, which is decidedly not casual.” 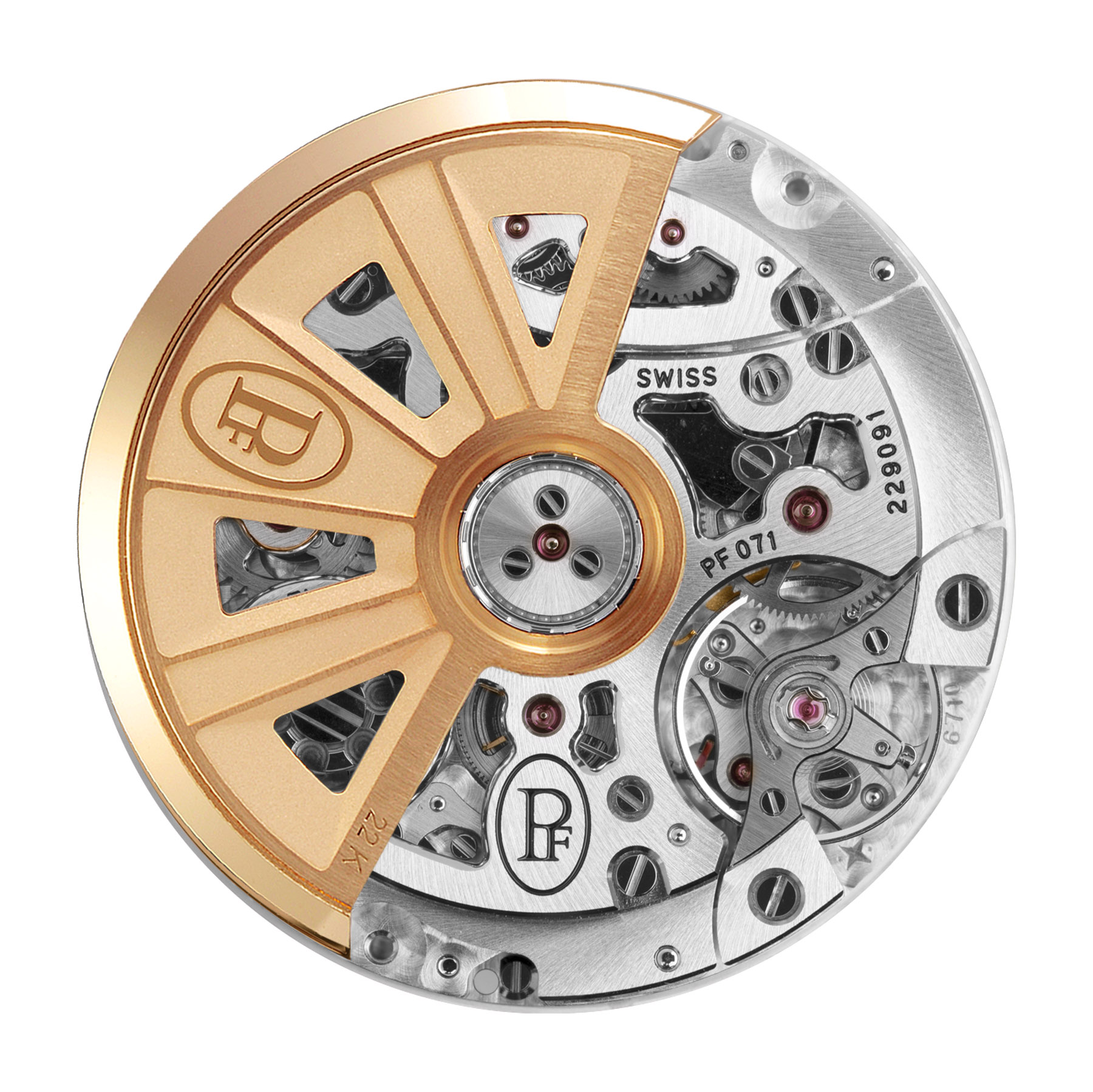 Housed in a 42mm-wide and 14.3mm-thick case with 100m of water resistance, this rose-gold case model makes the same monochromatic dial with the exception that the hands and outline of the indices are done in matching gold.

The Tondagraph GT Rose Gold Silver Black, however, really comes to play with its impressive movement. Turning the Tondagraph GT Rose Gold Silver Black on its case back reveals the in-house PF071 COSC chronometer-certified movement. Boasting an integrated chronograph with a column wheel as well as a cross-bridge balance, the PF071 also has a high-beat frequency of 36,000 vph and can measure intervals of 1/10 second. Decoration is what you’d expect with the 22k gold rotor and hand-beveling and finishing throughout, making the PF071 a top-notch chronograph movement. 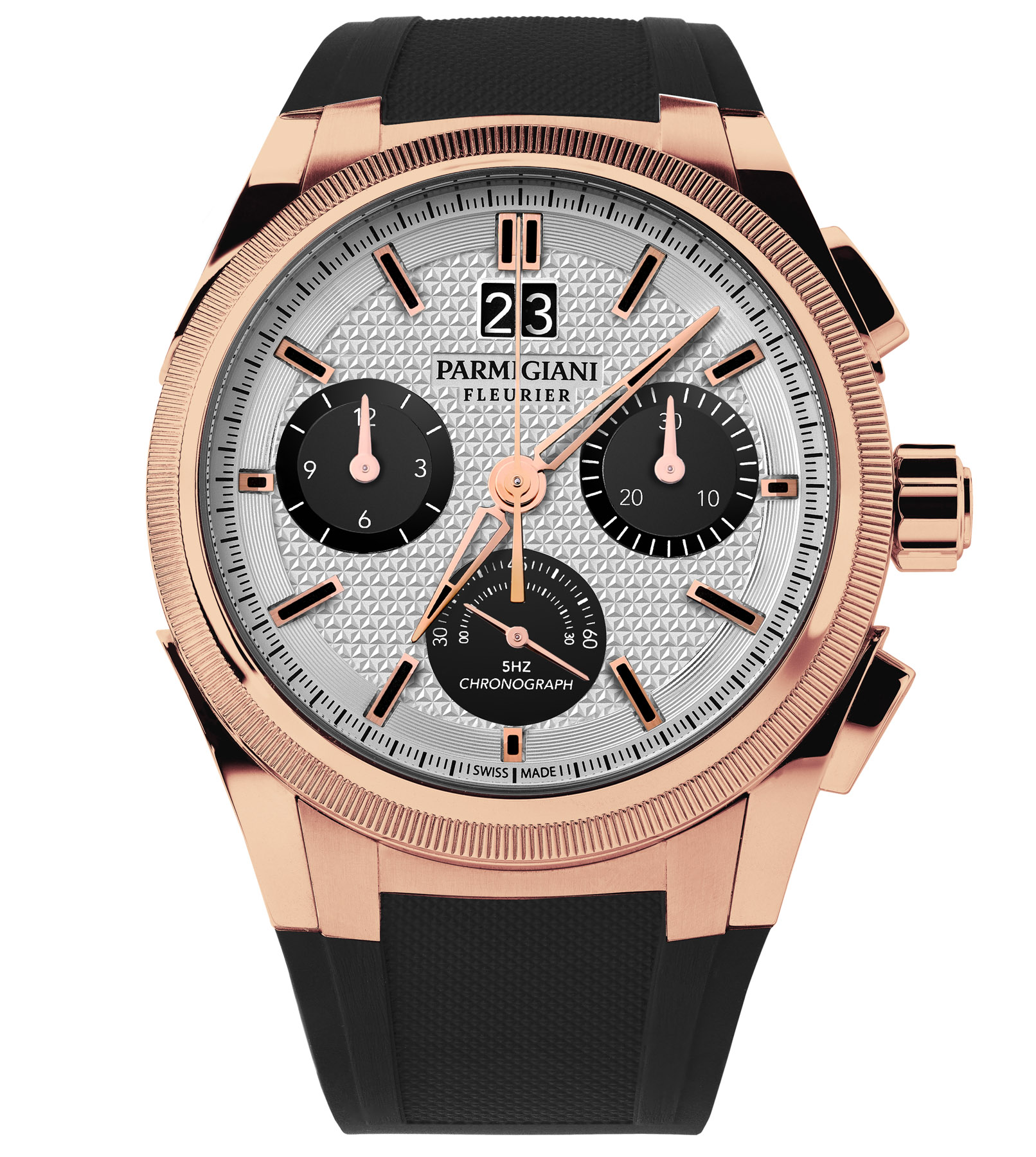 Both new models are available on either a rubber strap or matching steel/rose-gold bracelet. While it’s much simpler with the steel model, I still stand by my opinion on the matter of straps and bracelets: “The Tondagraph GT could hugely benefit from a few small changes. As I mentioned with the Tonda GT, I think brands should follow the lead of peers like Vacheron Constantin, which markets the Overseas to come standard with a bracelet and two straps rather than making the buyer choose. I think this would make the overall product a lot more compelling for this admittedly niche buyer.”

Both these new Tondagraph GT watches push this still-new collection in the right direction, and I largely commend the design decisions here. It’s so fascinating to watch Parmigiani move into this sports watch space, and I don’t think I’m the only one keeping a close eye on where this niche brand goes next. The Parmigiani Tondagraph GT Steel Silver Black is priced at $20,400 on rubber strap and $21,500 on the matching steel bracelet. I much prefer the latter, and the narrow pricing delta just reaffirms my belief that there should just be one steel option with bracelet/straps included. The Tondagraph GT Rose Gold Silver Black is priced at $45,300 on strap and $72,500 on matching rose gold bracelet. Unlike the previous iterations, which were limited editions, these are the first Tondagraph GT watches that will be in regular production. You can learn more at parmigianiamericas.com.