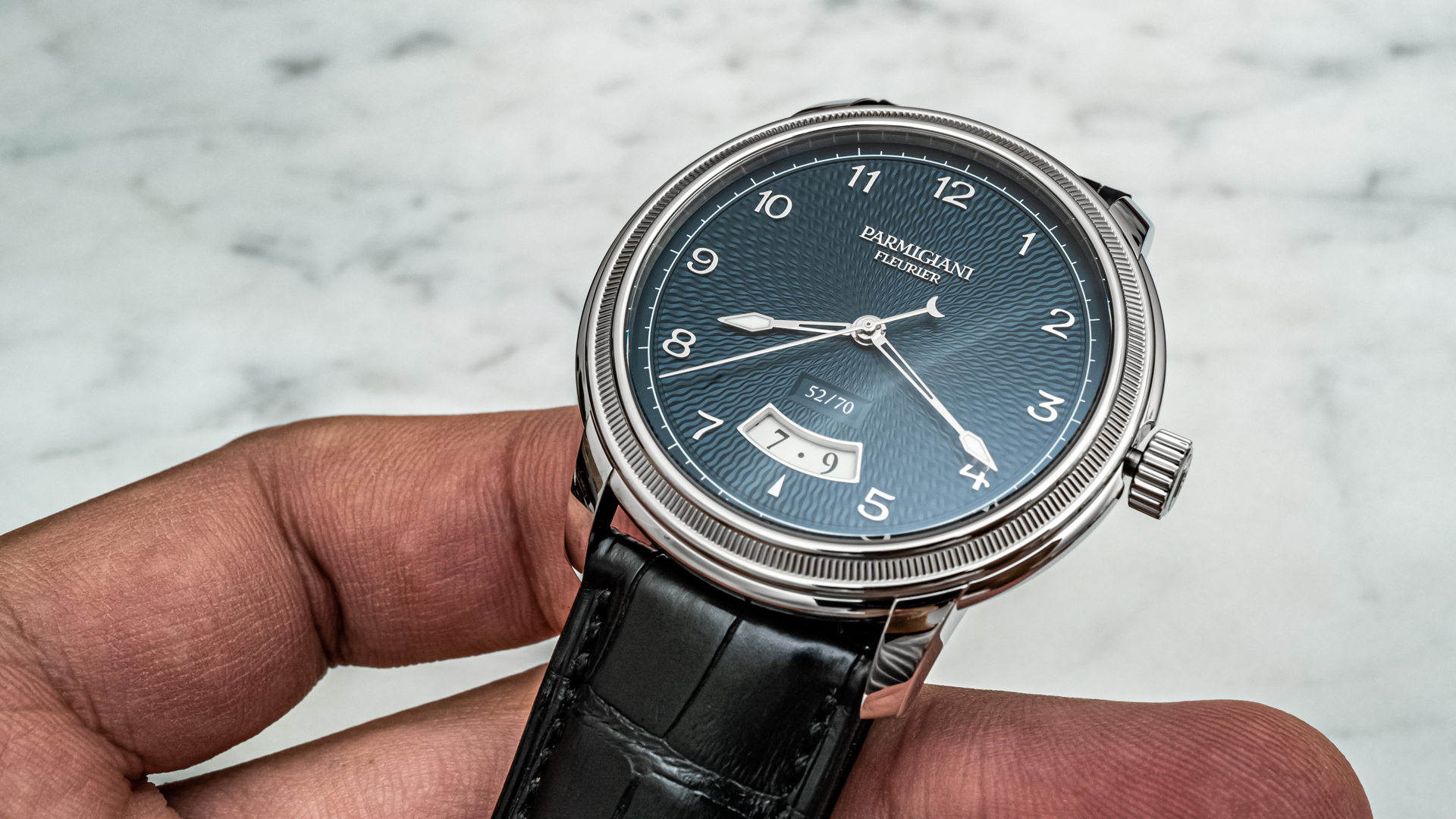 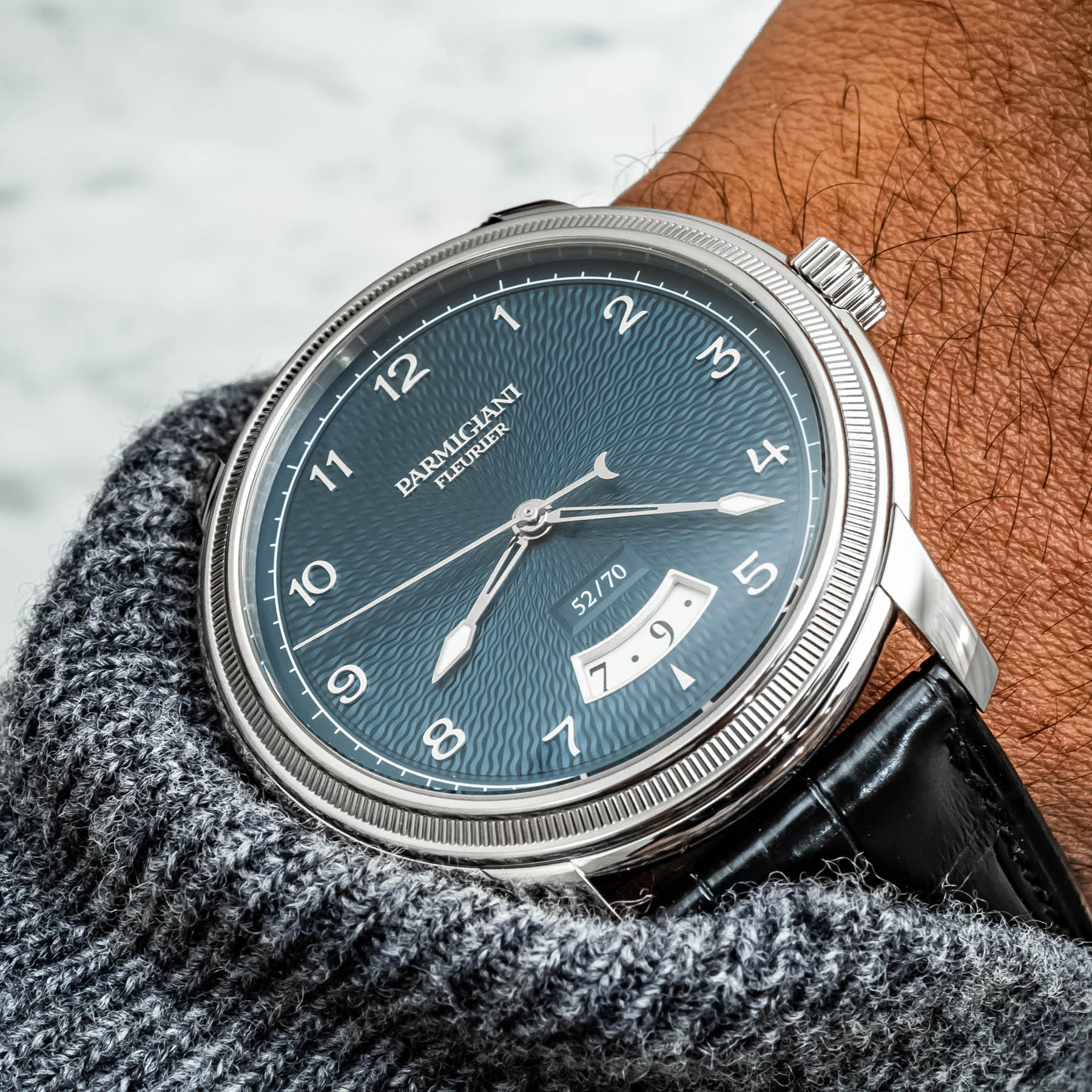 In honor of founder Michel Parmigiani’s 70th birthday, the brand has just released this steel Toric Héritage that is limited to, you guessed it, 70 pieces. Michel Parmigiani has had a long and prolific career in both timepiece restoration and watchmaking with his namesake brand launched back in 1996. The accomplishments and milestones of Parmigiani’s career are exhaustive and require another full article to even begin to cover, but it’s fair to say the man is a modern icon in the industry. The Toric Héritage is a take on the Toric Chronometre that was redesigned and refreshed back in 2017. I don’t believe there is an existing steel variant that has the elaborate hand guilloché dial like we see here, which makes it even more special, in my eyes. Limited to 70 pieces, the Toric Héritage celebrates the remarkable talent of the man at the helm of Parmigiani Fleurier. 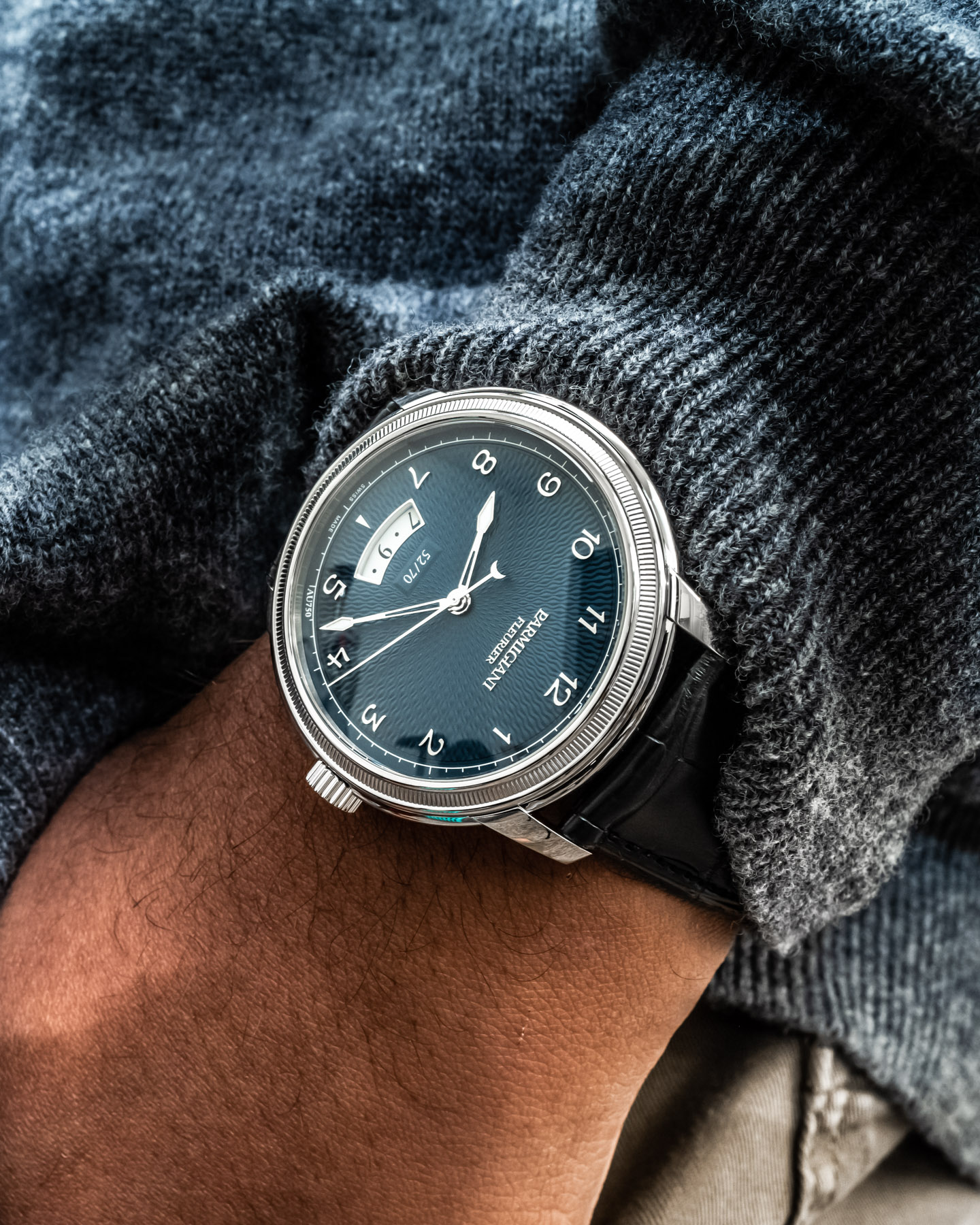 The Toric was the first watch Michel Parmigiani created and, like with all his pieces, there is inspiration to be found from the Golden Ratio (you can read more about Parmigiani and the Golden Ratio here). The Toric case design came from Michel ruminating on ancient Greek columns and a seashell he found on the beach in Malaysia. Classic and well-proportioned, the Toric Héritage is, to me, always about that incredible hand-knurled bezel that has become a signature for the line. There are only a handful of instances in which we see the elaborate and refined Toric case done in steel, but they’re no less impressive in the metal than their gold counterparts. 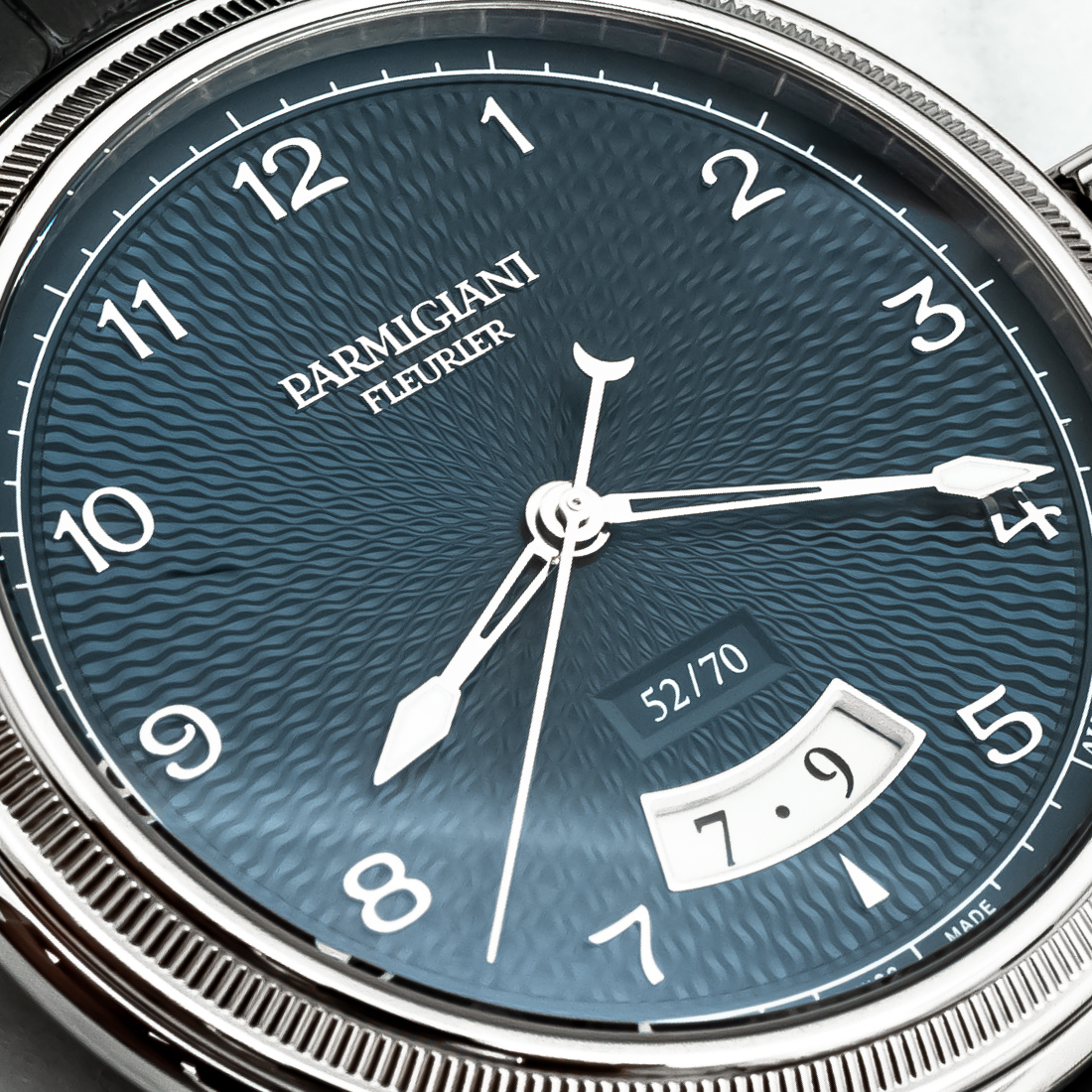 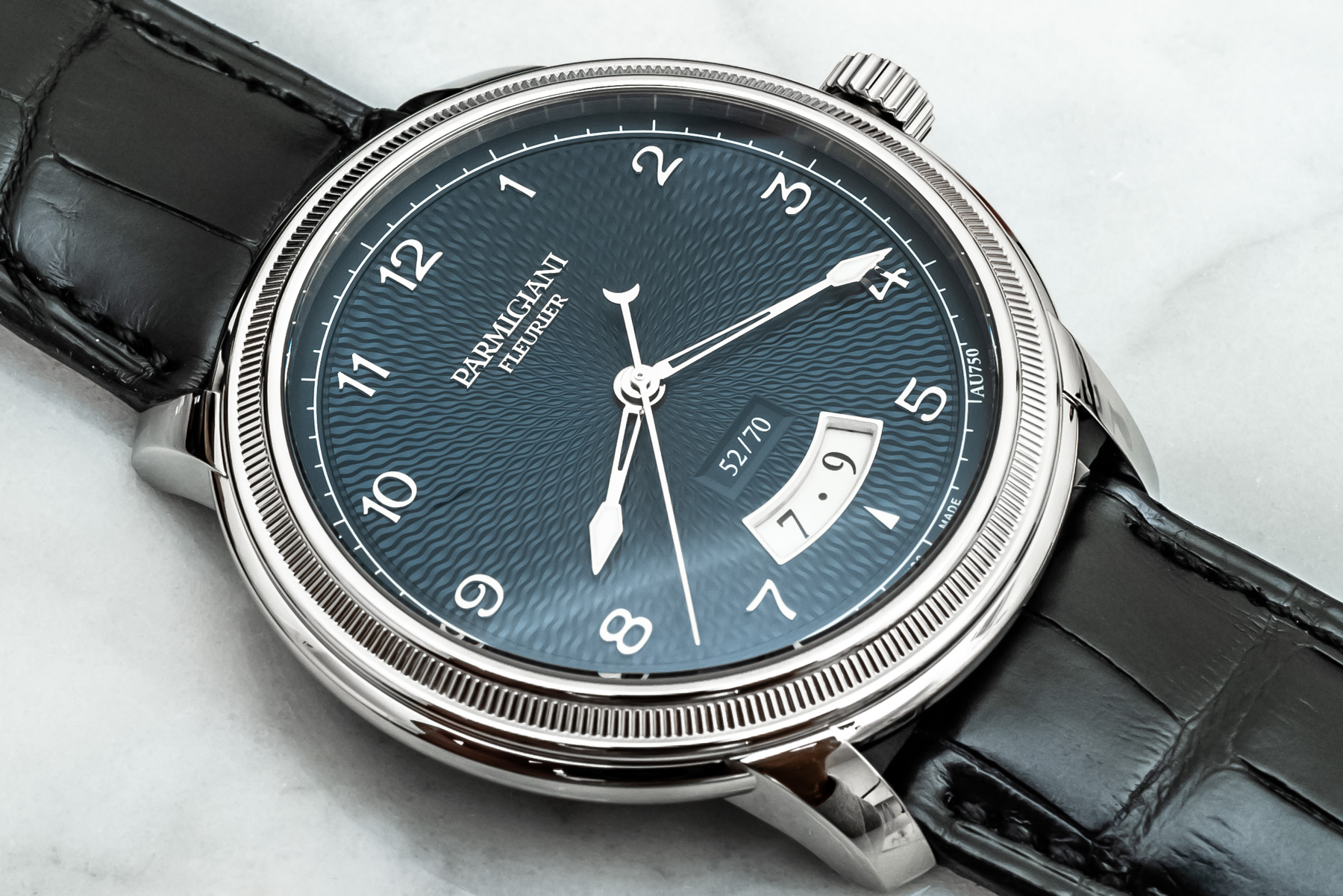 Another classic Michel Parmigiani touch for the Toric collection has been the hand-done guilloché work on the dial. Here in a deep blue Grain d’Orge guilloché, the dial is pretty exquisitely finished. In fact, I spent several minutes admiring it from different angles, but you can probably tell I’m a bit of a fanboy. Most guilloché Toric dials are done in more muted colors like slate or silver, so seeing one in blue was really refreshing and I sincerely hope we see them again sometime. An interesting design choice here was to have the number out of 70 on the dial above the date aperture rather than on the caseback. That said, the classic gold Toric Chronometre with guilloché dial has a plate reading “CHRONOMETRE” here, so it’s not as if they put the LE number where nothing would otherwise be. Still, if it were up to me, I would have kept this on the caseback — but I will allow a genius like Michel Parmigiani his druthers. It is his birthday, after all. 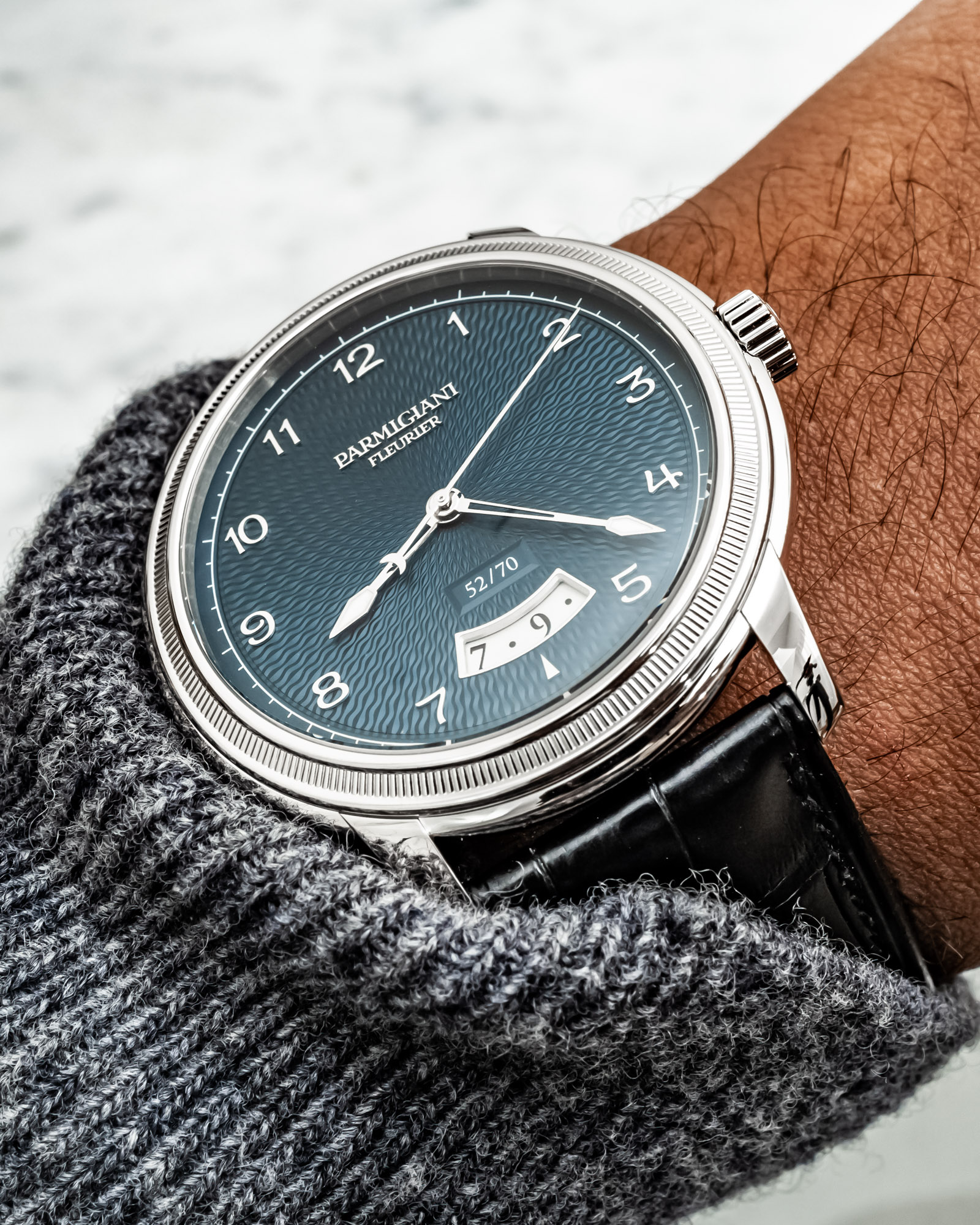 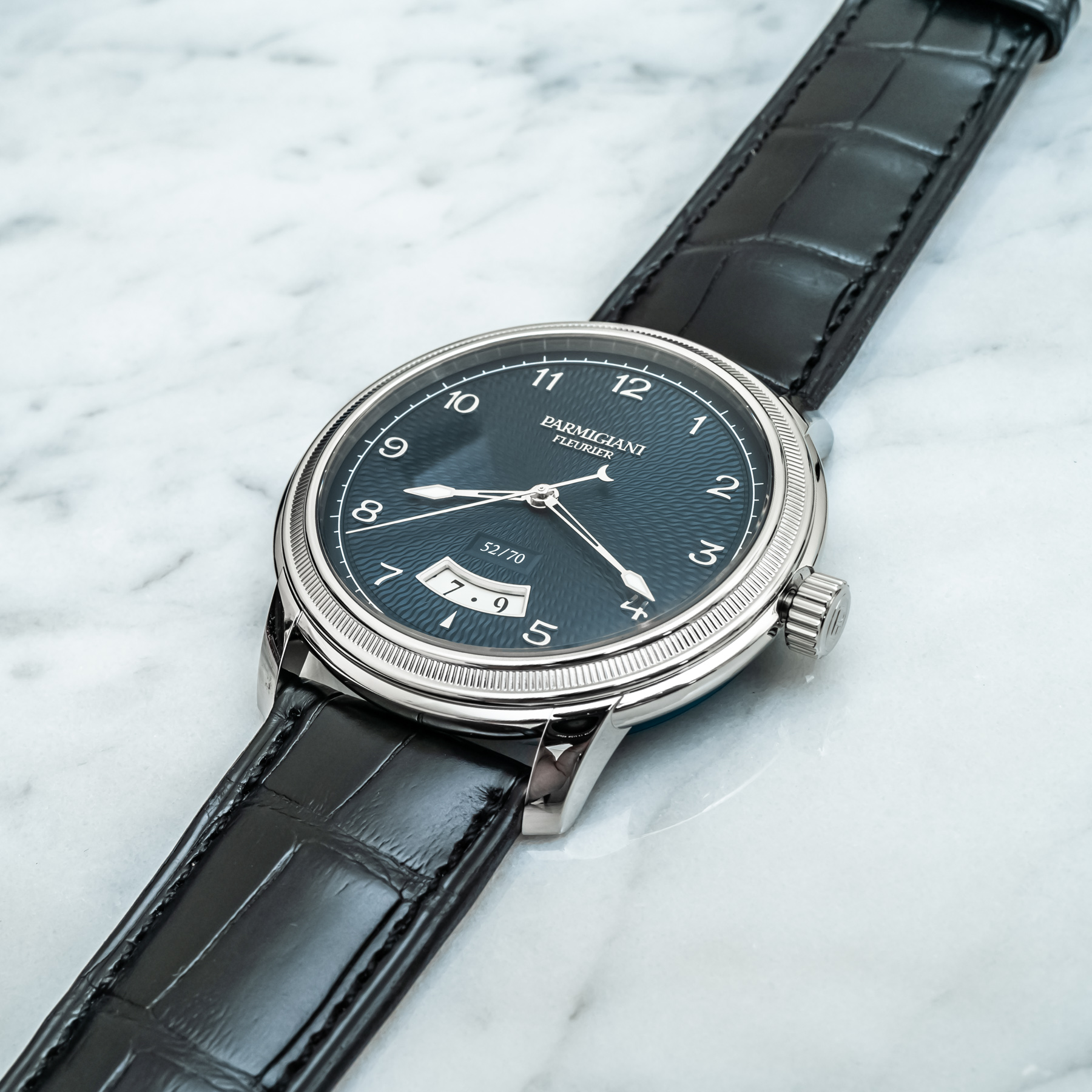 The individual, lovingly crafted dial touches on the Toric come together here in a piece worthy of Michel. The lumed javelin-shaped hands and applied numerals are done in a rhodium-coated white gold that contrasts against the blue dial, which really helps with legibility. If you were curious about their inspirational provenance, the javelin-shaped hands are inspired by Greek Goddess Athena’s spear and the numerals are done in a “Hindu-Arabic” font of which I can never get enough. 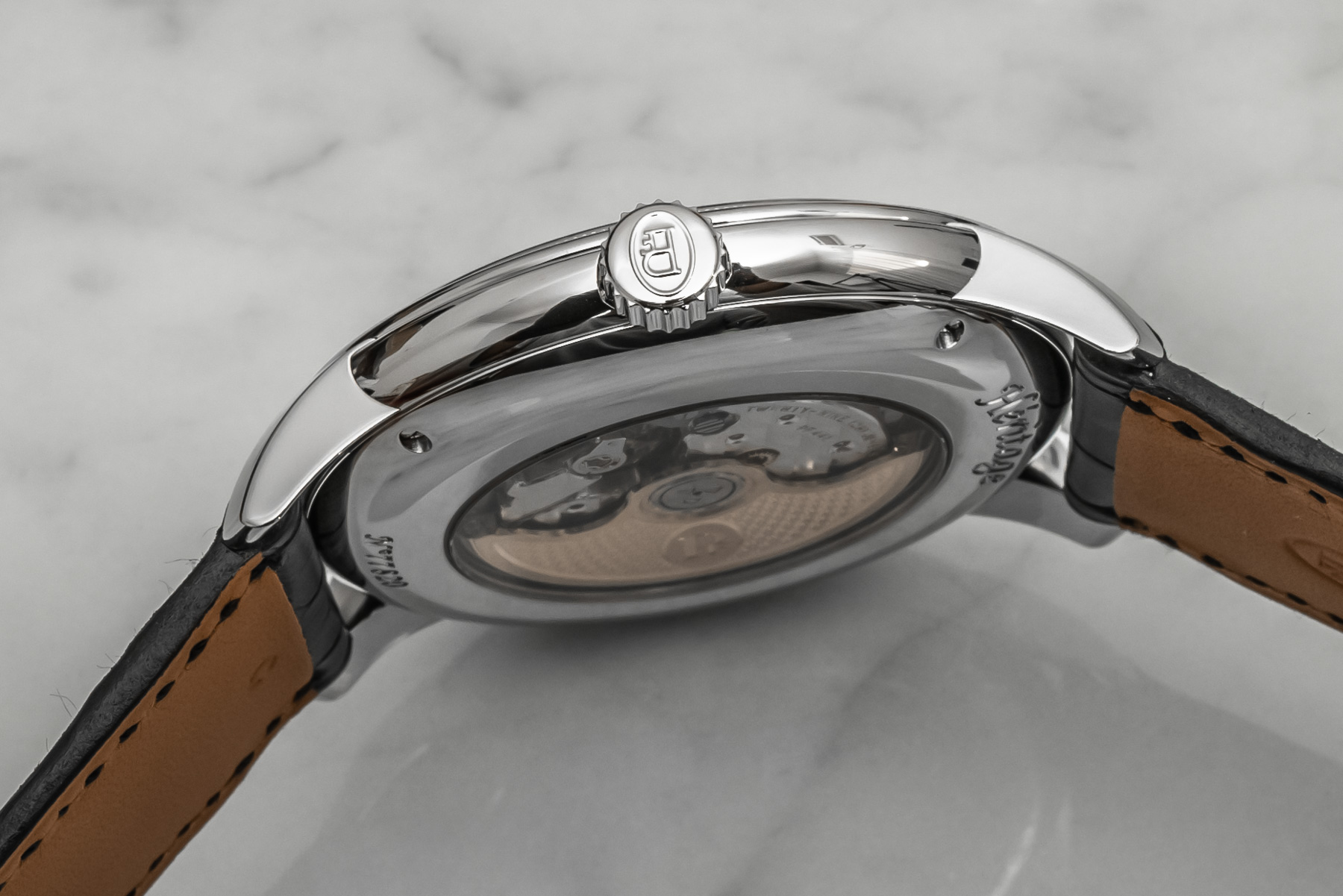 The case is nice and “large” (as far as traditional dress watches go, that is), which makes me happy because the knurled bezel and guilloché dial deserve to be shown off on an ample canvas. Measuring 42.8mm-wide and 10mm-thick, the steel case wears really well on the wrist and has 30M of water resistance. If you’re familiar with the Toric collection and have handled any of the pieces in the metal, you know that these are very special watches. The striking blue dial makes this recognition even starker, and having it in steel is a rare treat. 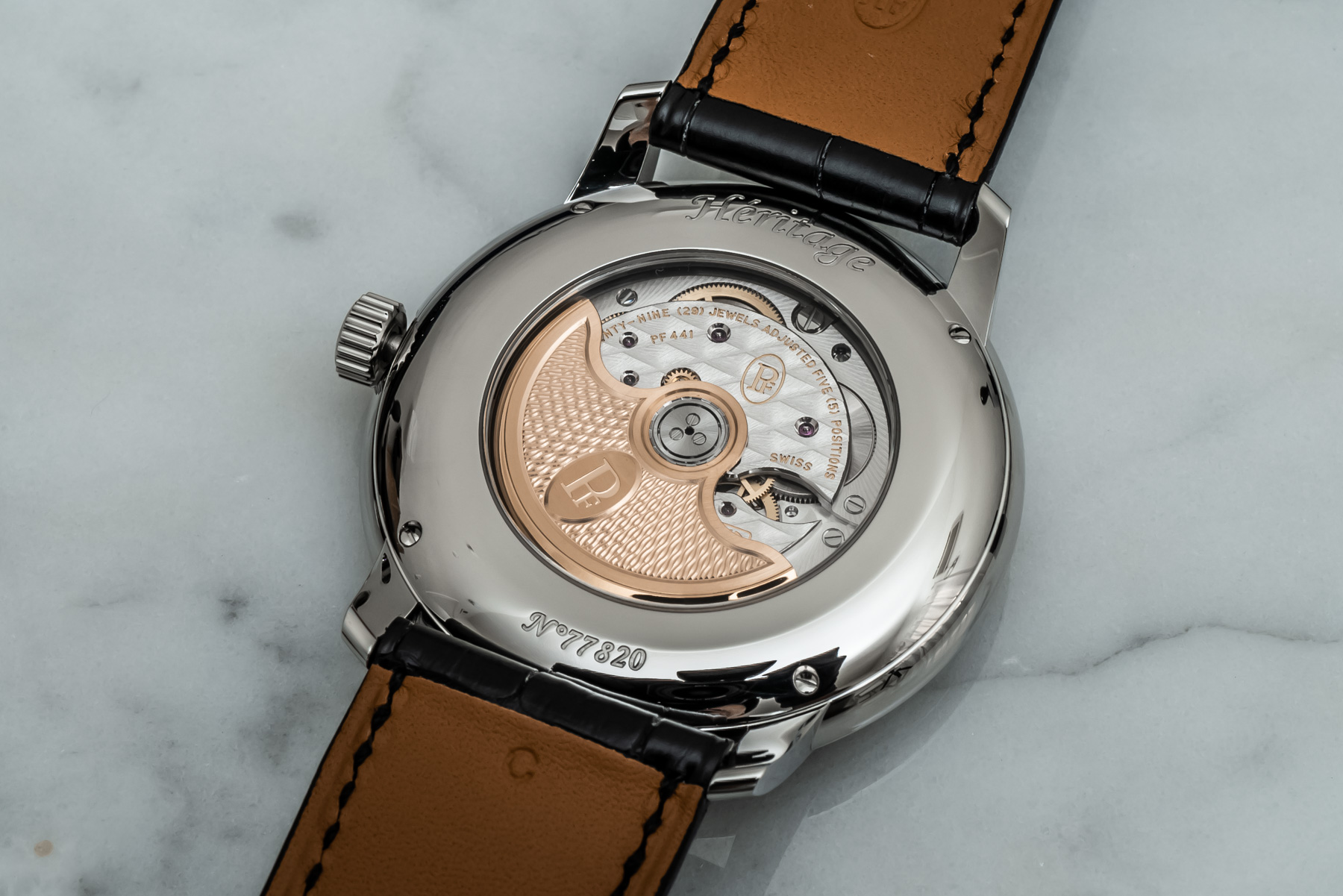 Turning the case over shows the in-house COSC-certified PF441 automatic movement. With twin barrels, the movement has a 55-hour power reserve and operates at 28,800 vph. This being a Parmigiani, the movement finishes are as impressively done as the case and dial. With Geneva stripes, circular-graining, hand-beveling,  and mirror-polished angles throughout, the PF441 puts a bow on things with that eye-catching solid 22k rose gold rotor that has the same Grain d’Orge guilloché found on the dial. 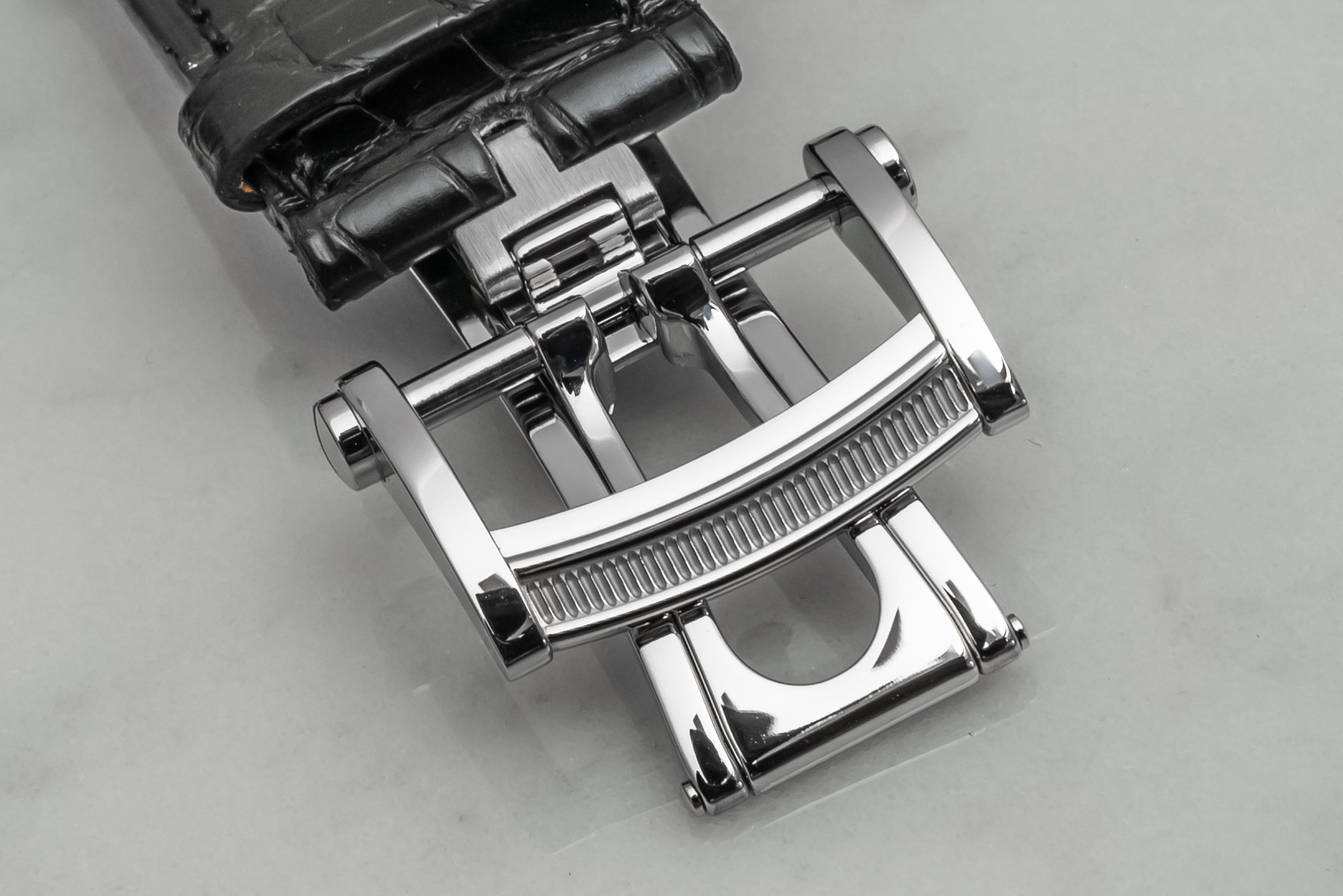 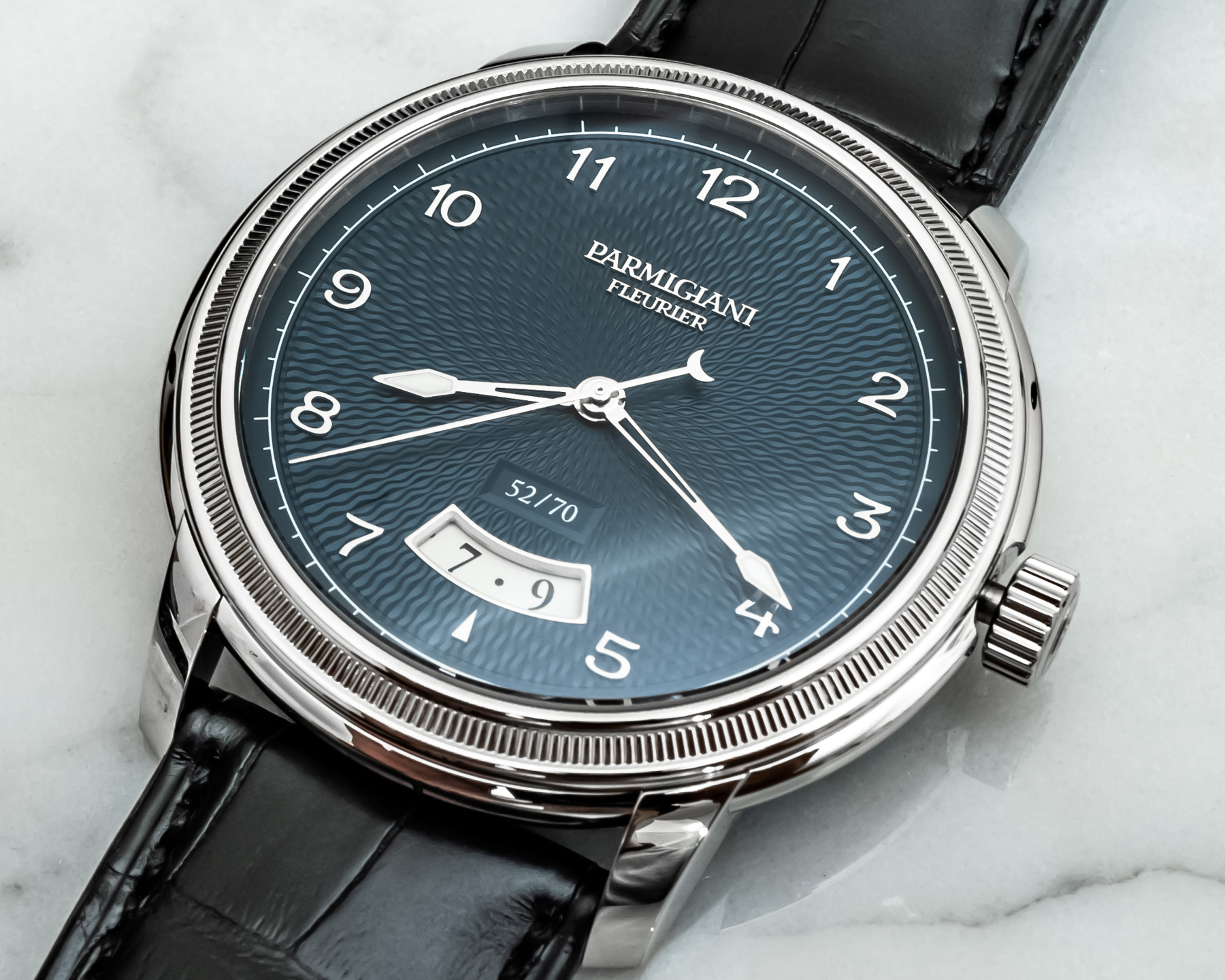 Michel Parmigiani is an icon, and the occasion of his 70th birthday is indeed something to celebrate. This steel Parmigiani Toric Héritage is limited to 70 pieces, comes on a Hermes Abyss blue alligator strap with folding clasp  and is priced at $17,700 USD. You can learn more and pre-order the piece here at parmigianiamericas.com.