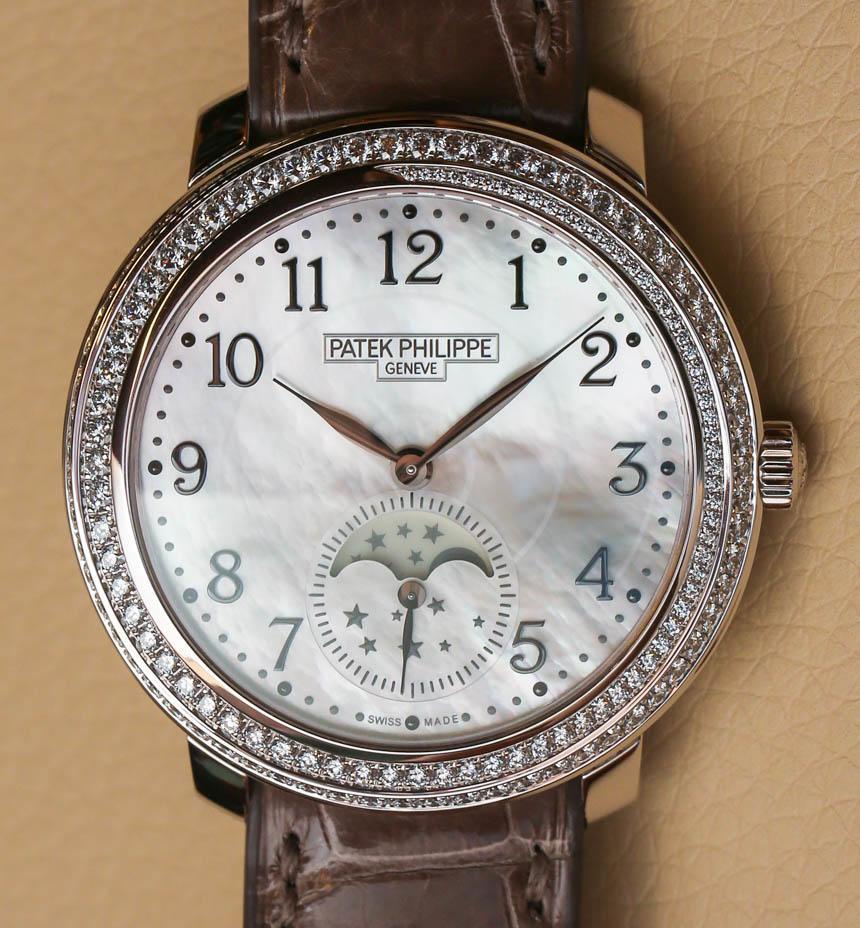 Back in 2012, Patek Philippe introduced the Diamond Ribbon Ref. 4968. That whimsical title bears reference to a watch inspired by the swirling silk ribbons used in rhythmic gymnastics: the ribbon in this particular case is interpreted as 273 diamonds, and what arguably is the most interesting detail of them is the way they gradually increase in size as they encircle the mother-of-pearl dial. 2014’s edition is crafted from white gold and is presented on a leather strap.

Although it has been for a number of years now that we are seeing more elaborately crafted and designed high-end ladies’ watches, with a little research, we can discover interesting details in the history of women’s watches that go back much further in time. Therefore, before discussing this piece in greater detail, let us concentrate on a little snippet from Patek’s past – a company, whose history with these timepieces goes back a long way. Although Patek Philippe was founded in 1839, the company made one of its first major breakthroughs at “The Great Exhibition of the Works of Industry of All Nations,” or the Great Exhibition of 1851. The notice came from Queen Victoria, who loved fine craftsmanship and whose husband, Albert, the Prince Consort, was a man of innovation who was driven to the idea of merging science and art to the manufacturing industry – so much so, that he initiated the First World Expo. 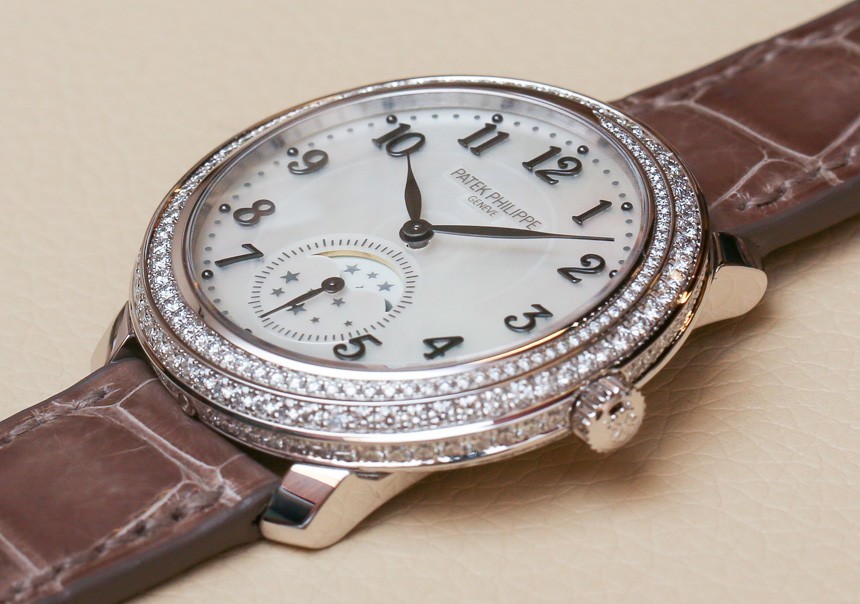 It was at this 1851 exhibition that Queen Victoria was visiting the booths of the numerous hopeful vendors (who all wished upon her good grace and financial support) and stumbled upon a key-wound Patek Philippe Watch, crafted in a pendant style. This moment, as the story goes, fused a relationship between Patek Philippe, Queen Victoria, and her consort Prince Albert.

Over 160 years have passed since then, and yet, Patek to this day avowedly strives to be amidst the top manufacturers when it comes to quality of execution. Having handled this watch – although my gaze is not as keen as that of the Queen – I do notice that, upon first look, every tiny component is finished with utmost attention to detail in mind. After all, the watch is powered by one of the finer hand wound movements in the world: the Calibre 215 PS LU (with “PS” standing for “petite seconde,” i.e., the seconds subdial, and “LU” for “phase de lune,” or moon phase), and the case is designed to be more unique than that of your average diamond-encrusted ladies’ watch.

The 18-jewel ultra-thin – a mere 3mm thick – manually wound Calibre 215 is one of Patek’s staples. Now, when I say staple, I do not mean the movement is ordinary or generic, but rather, I mean that the Calibre 215 requires no augmentation or revision at this point. The movement stands on its own baring a quiet confidence requiring no fanfare other than the paragon of its construction – an enduring trait found in all Patek Philippe’s timepieces, resulting in astronomical outcomes at auctions. 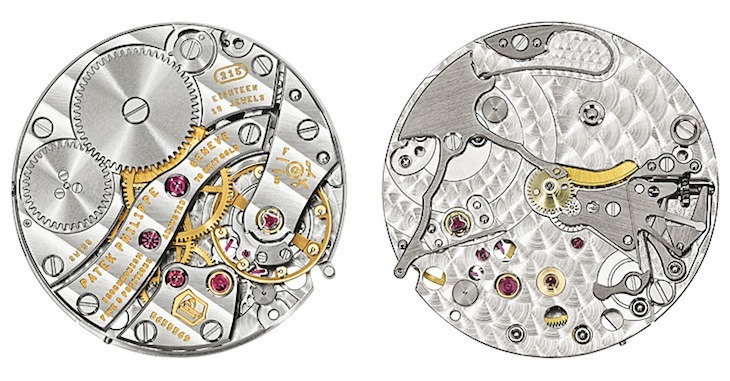 Despite the fact that we are looking at a refined ladies’ watch here, let us briefly mention the details of the movement within. The Calibre 215 is equipped with a Gyromax balance, beating at 28,800 vibrations per hour, ensuring an abiding, steadfast precision. The Gyromax balance is unique in that, instead of using a balance rim with threaded holes and screws, this system uses weights set down into the rim which can be rotated on their mounting pins in order to move the mass of the weight inward or outward. In addition, the extensive angling of plate and bridge edges enhance the movement’s aesthetics and eliminate debris during servicing. All 157 movement components are individually designed to ensure the precision, longevity, and reliability of the entire timepiece. The movement is capable of a power reserve ranging from 39 hours to 44 hours. The entire movement is visible via a sapphire crystal case back. 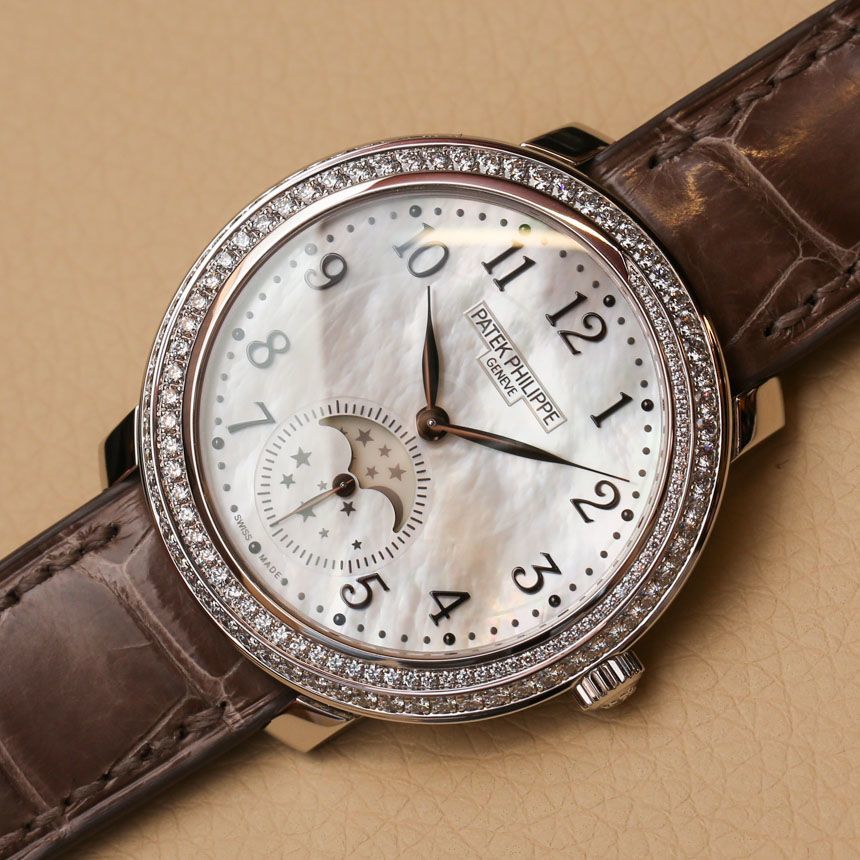 The moon-phase complication is set on the lower half of the dial beneath the small seconds display. This complication, although not exclusive to mechanical movements, certainly adds some sense of mechanical superiority – which is still quite a unique aspect in women’s watches. The general notion among watch manufacturers is that no matter how many diamonds are placed on a watch case, women prefer quartz watches (or rather, they do not care that much for mechanical watches), thus the majority of women’s watches are quartz. However, this notion is starting to give way to the idea that there is a market for more beautifully executed mechanical women’s watches.

I have seen over the past ten years more and more high-end watch companies like Patek Philippe adding collections of mechanical women’s watches. It still is very much a developing trend, but with it come mechanical women’s watches equipped with complications. Most of the complications are single mini complications, but more recently, highly complicated women’s watches like the Patek Philippe women’s Grand Complication Collection have become available. I for one love the moon phase complication, not so much for its functionality, but rather for its quality and the way it provides an elegant enhancement to the timepiece’s aesthetics. A depiction of the sky above: the moon’s monthly waxing and waning depicted on the wrist will likely never get old. 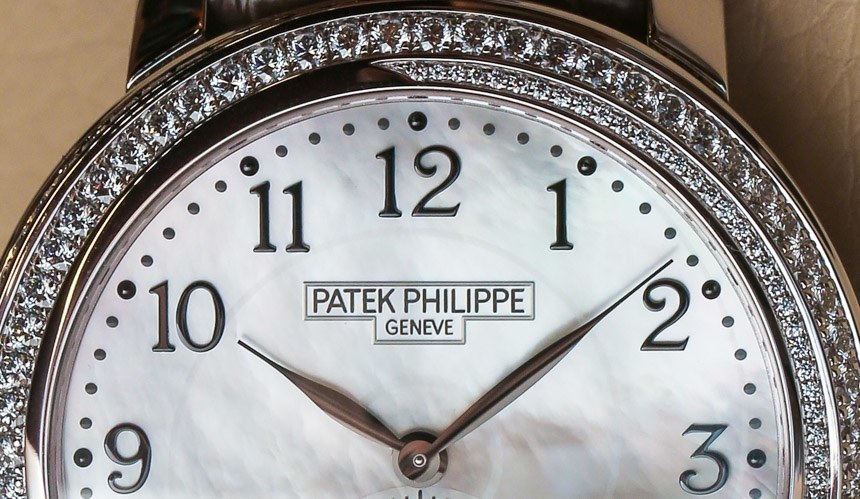 The Patek Philippe 4968 Diamond Ribbon comes in a 33.3 mm white gold case which was designed to be glamorous enough to be worn with an evening gown and subtle enough to be worn each and every day. This is a balance that I found to be more scarcely present among women’s watches than with men’s timepieces. The iridescent mother-of-pearl dial creates a rainbow of structural colors achieved by the natural configuration of the material. The key design element, however, still has to be the engraved spiral on the periphery of the case, highlighting the twirling ribbon effect on the bezel. The diamonds set into the swirls have to be of an almost constantly changing size to follow the widening of the swirls. It is a design element that is not only difficult to pick out on images, but also in person; from afar, it looks as though the Patek Philippe 4968 Diamond Ribbon had your standard one-tier diamond-set bezel, with the different levels becoming apparent only upon a closer look. Anyhow, it a very welcome design that adds that much-needed uniqueness to an otherwise more restrained piece.

Eleven Arabic numerals in black ruthenium were applied on the dial, ensuring an optimal level of readability. Ruthenium is a transition metal of extreme rarity and part of the platinum group on the periodic table. Ruthenium is tarnish and corrosion resistant, as well as highly resilient. The shiny hand-stitched taupe leather alligator strap is very comfortable on the wrist, while a prong buckle set with 32 diamonds fasten the strap and secure the timepiece to the wrist. As with most jewel encrusted watches, the watch is water resistant to 30 meters.

Clearly, a lot of thought went into the creation of the Patek Philippe 4968 Diamond Ribbon, and it shows. I especially enjoy the more joyful double-pattern of the diamonds, paired with the classical mother-of-pearl dial and large Arabic numerals. The icing on the cake surely is the hand-wound 215 caliber, which renders it a blue-blooded, very refined ladies’s watch. Price for the Patek Philippe 4968 Diamond Ribbon watch is $58,600. patek.com