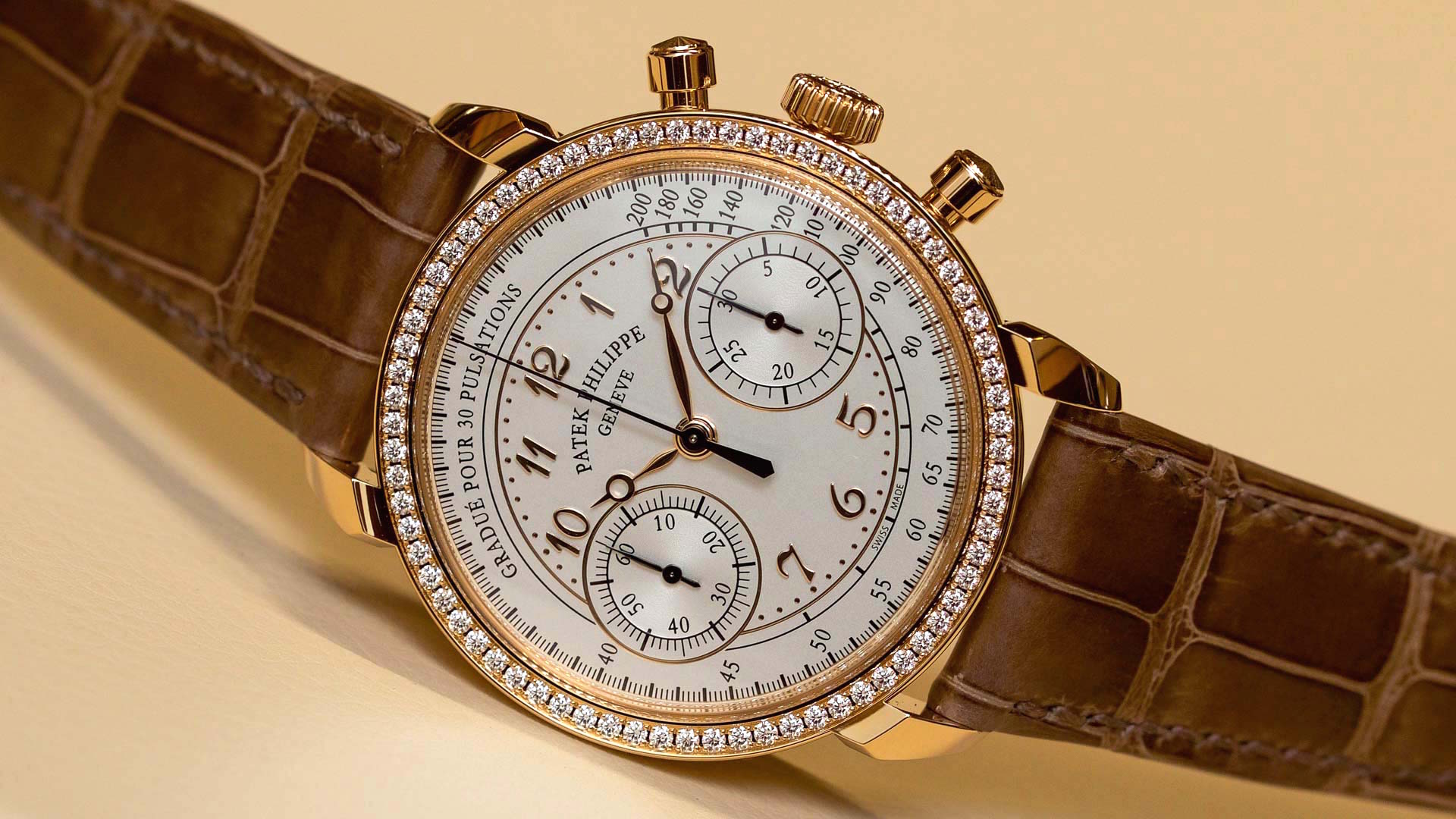 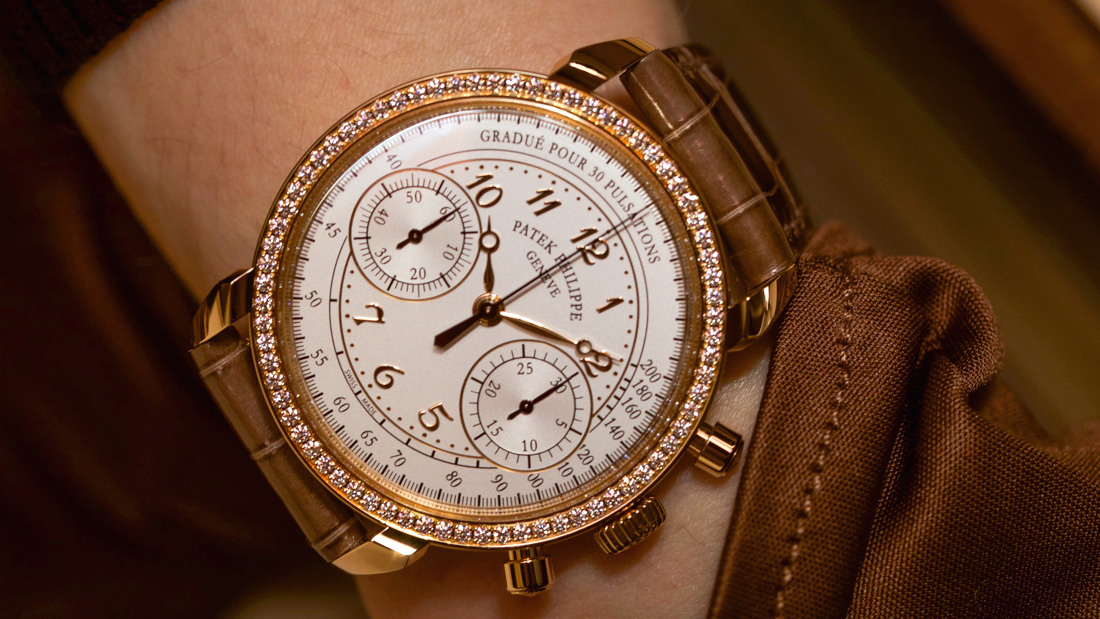 Patek Philippe introduced its first in-house integrated chronograph Caliber CH 29-535 PS in a ladies’ watch, the Ref. 7071, in 2009. The movement appeared in a men’s watch the following year, again in 2012 as the base for a split-seconds chronograph with a perpetual calendar, and in 2015 as a split-seconds without the perpetual calendar. But the movement will forever be remembered as the ladies’ chronograph. That first model is now discontinued in favor of a completely redesigned ladies’ chronograph, the Patek Philippe Ref. 7150/250R-00, a sportier version of the 7071. 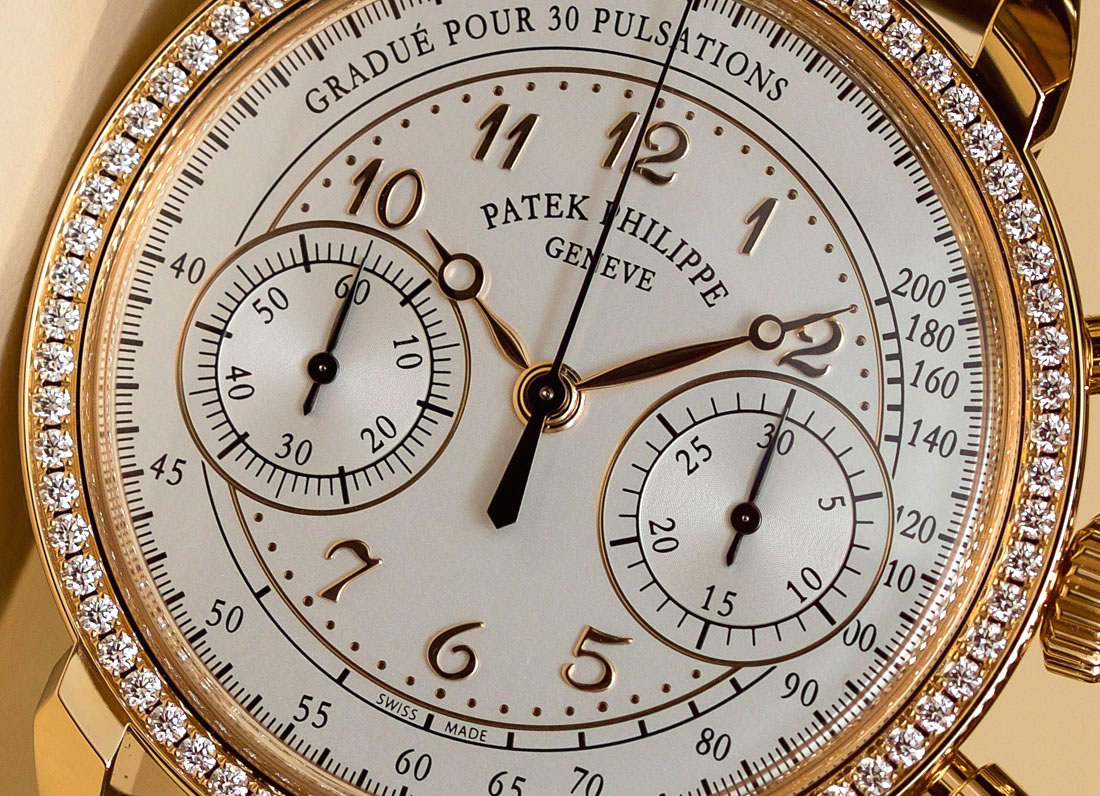 All hands-on images by Carol Besler

The 7071 had a cushion shaped case and round dial with diamonds set into the corners between the dial and case; the new one, Ref. 7150, is round, with the addition of a pulsometer, and instead of Roman numerals and markers, it has applied Arabic numerals. It could be a men’s watch. The only thing that identifies it as a ladies’ watch is the diamond-set bezel, and, I guess, the size. It is 38mm by 10.59mm thick. The 7071 was discontinued last year, and I’m sure I’m not the only one who regrets not buying one. 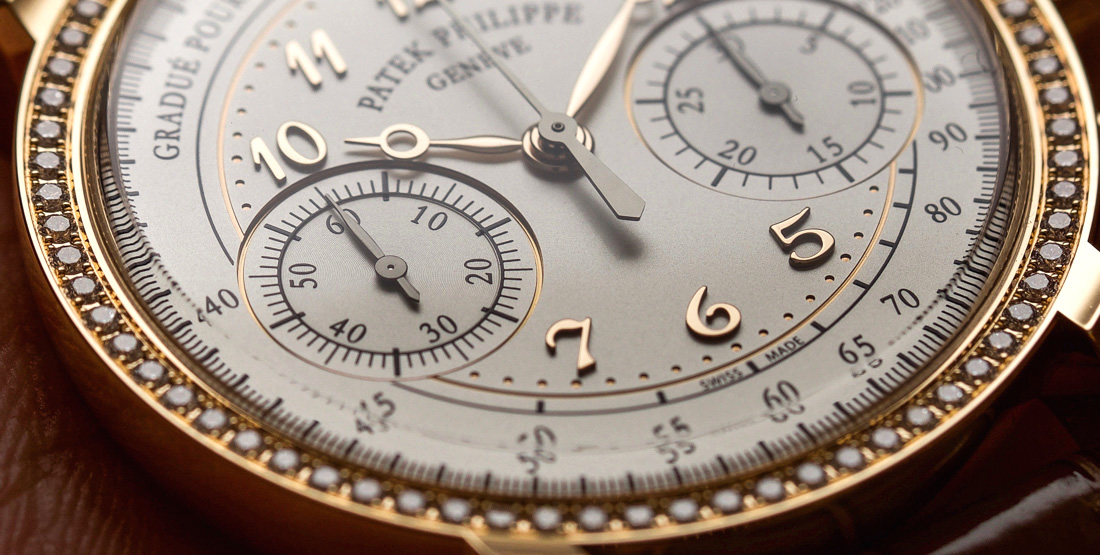 That being said, I would trade the original ladies’ chrono in for the new one in a heartbeat. It’s a more classic Patek, with the rounded case. No matter how much I liked the 7071 with its round dial in a cushion shaped case, I couldn’t help but think of the Vacheron Constantin Harmony Chronograph. There is no such similarity with the new Patek Philippe Ref. 7050. It is pure Patek. It is also still very much a ladies’ watch, even with the pulsometer, which gives it a vintage look that I like. And it not only adds a function, but gives the watch a more technical feel even if you don’t use that function. That means something when you are wearing a watch made by a brand famous for its technical excellence. I also prefer the Arabic font, which is the same as on the ladies’ Travel Time Reference 4864, even though my normal preference is for Roman numerals, as on the 7071. There are fewer diamonds on the new 7150 and they are placed on the bezel rather than the shoulders, as in the 7071. The bezel setting is more classic, and although I like the placement on the 7071, it makes it more of a niche piece. The new one is likely to better retain its value. 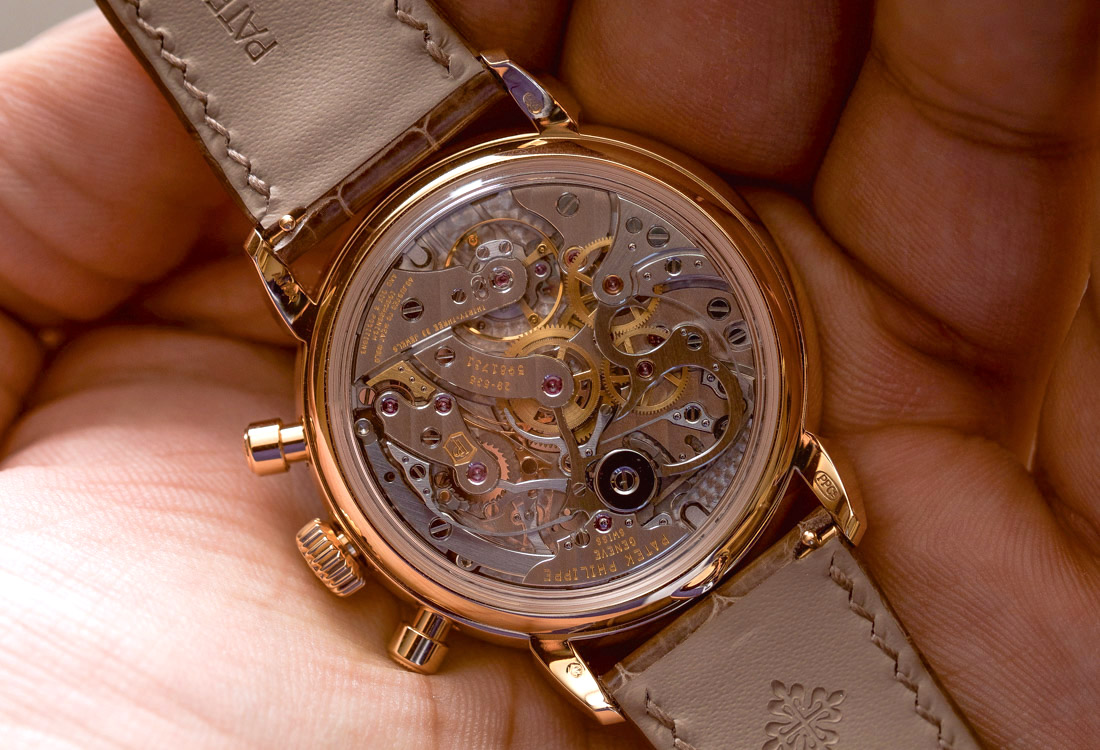 The movement is the same. The manual-wound Caliber CH 29-535 PS has six patented innovations that represented incremental improvements on the chronograph. Briefly, they are: 1. The profiles of the teeth on the wheels of the gear train were optimized to eliminate any lingering jump in the chronograph start/stop functions. 2. A refinement of the column wheel cap makes regulating the movement easier and more precise. 3. An improvement of the blocking lever renders the blocking/braking function simpler, faster, and more precise. 4. A new component to facilitate instantaneous minute register means that when the chrono is stopped and started again, there is not even a split-second delay, nor is there any perceptible jumping of the hand. 5. A re-fabrication of the hammers that set the seconds counters back to zero makes them self-adjusting, totally eliminating the need for adjustment by a watchmaker. 6. The hammers are held in place by two jewels rather than a post, so they operate more smoothly and precisely, and require less adjustment. 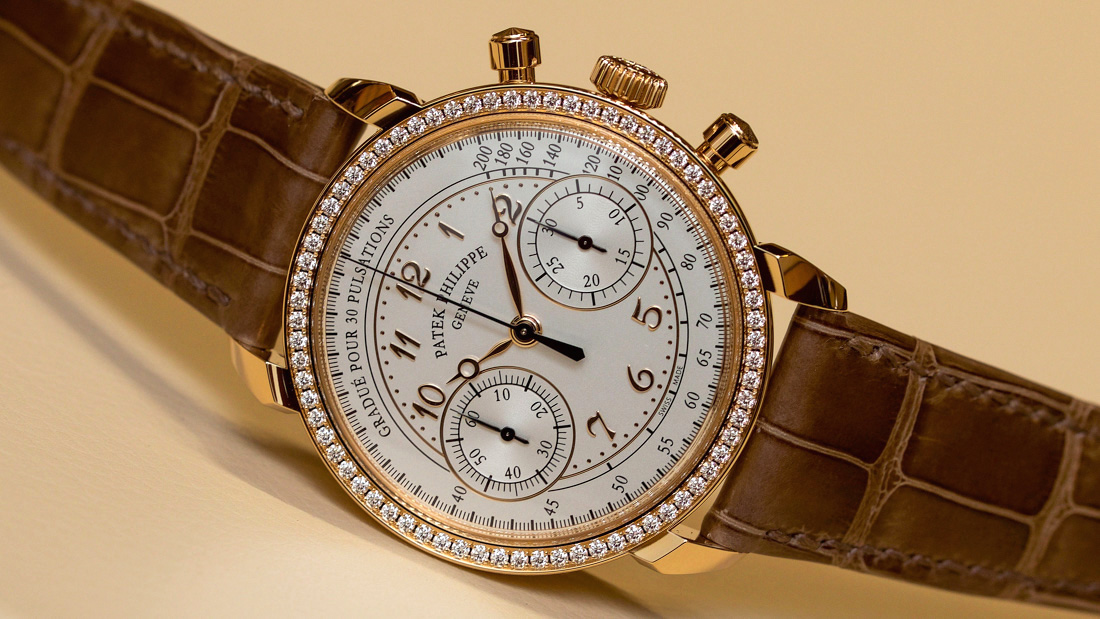 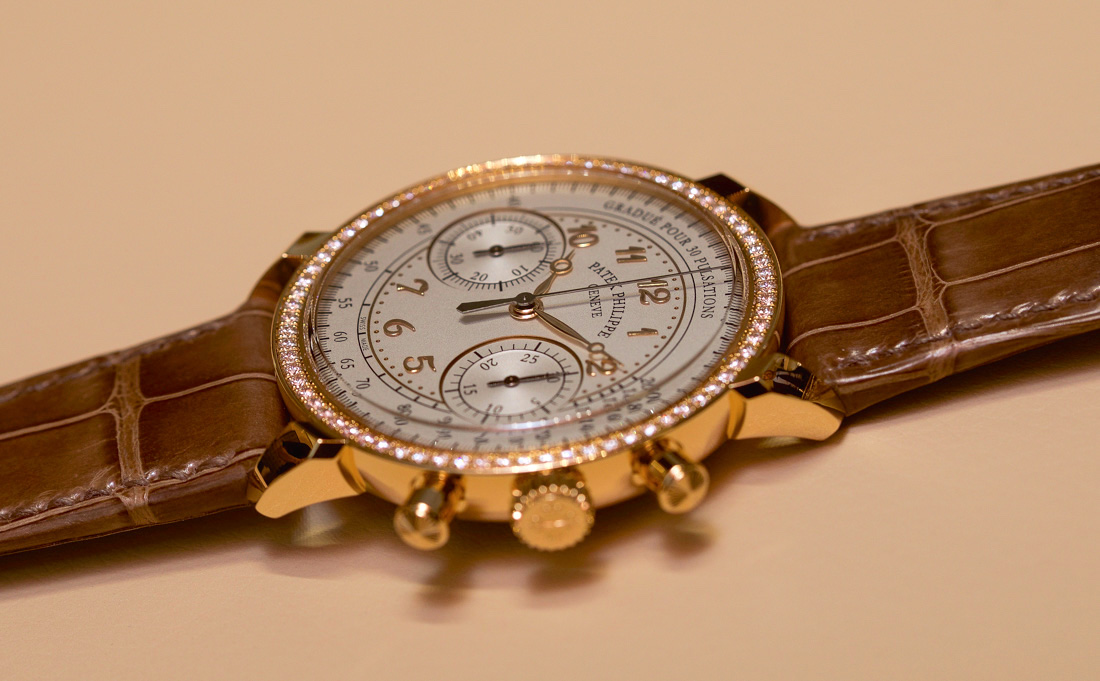 There are also innovations dedicated exclusively to the rattrapante function. When lap times are stopped, a newly designed isolator uncouples the split-seconds wheel from the chronograph wheel to eliminate unwanted friction and prevent a degradation of balance amplitude while the split-seconds hand is immobilized. A split-seconds lever with a ruby roller between two flat heart cam shoulders keeps the chronograph and split-seconds hands precisely aligned. As I mentioned, these are all just incremental improvements by a brand that has the means and the expertise to tweak every little detail of a movement, elevating from the level of really good to really great. 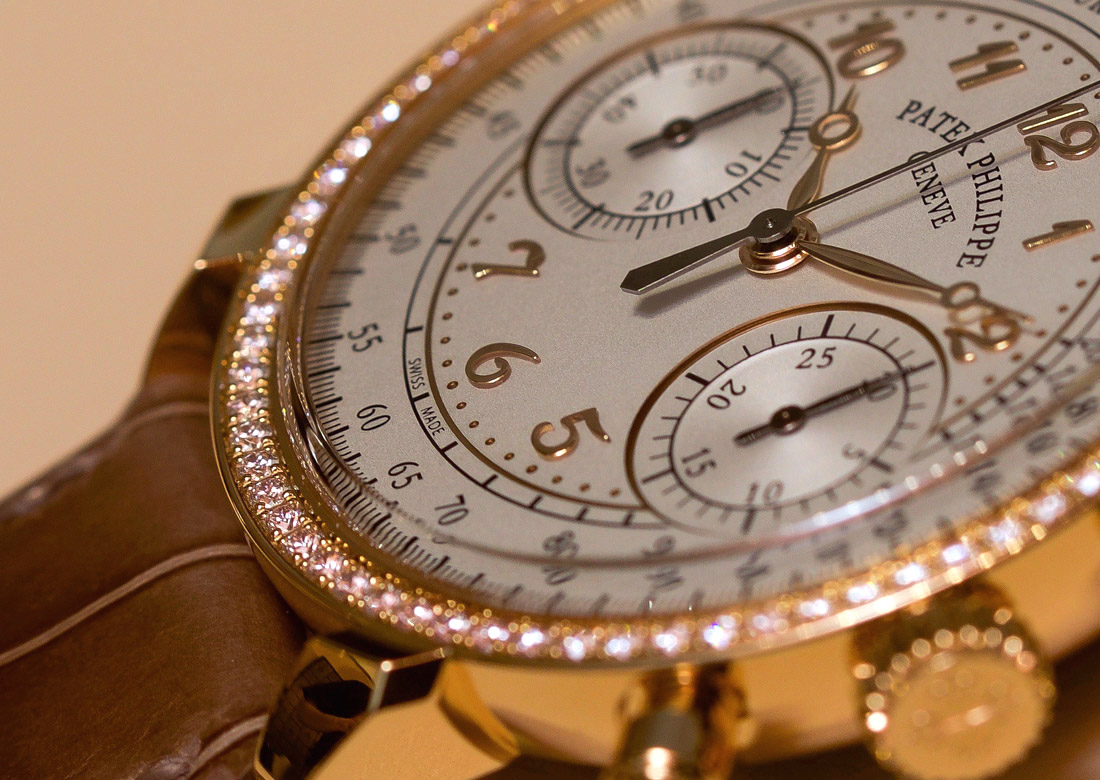 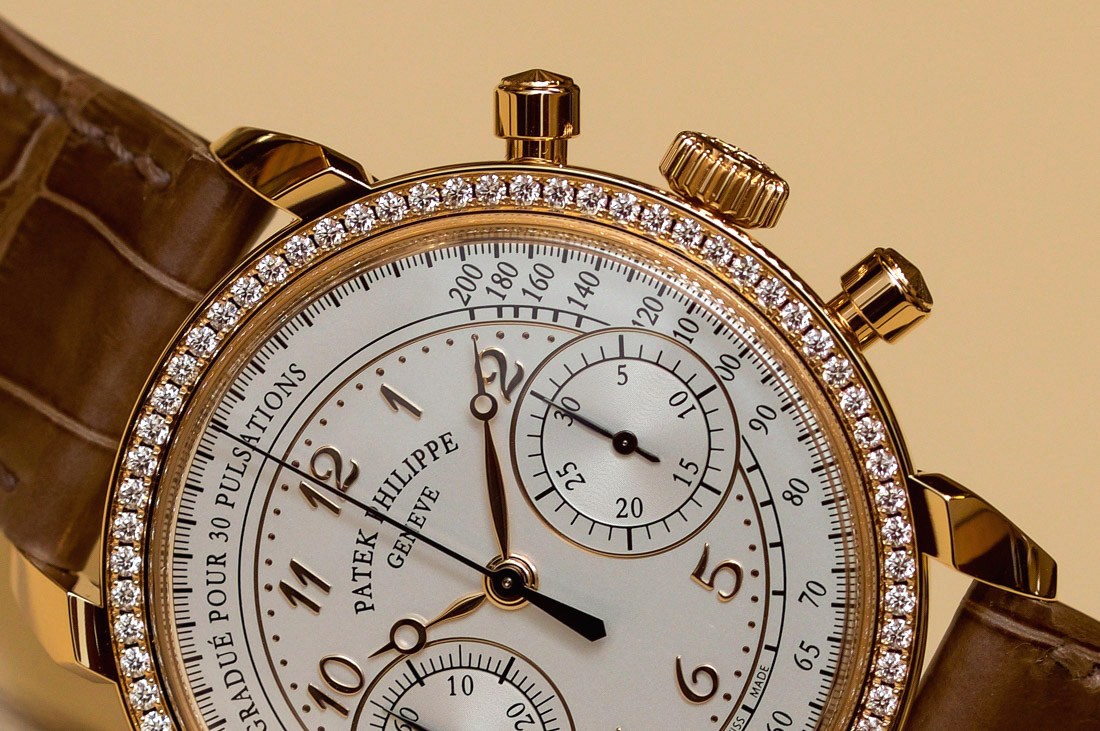 The bezel of the new model is set with 72 diamonds totaling 0.78 carat. Vintage details include fluted strap lugs, round guilloched pushers, a box-style sapphire crystal, and a pulsometer, which is a function of vintage chronographs. It is water-resistant to 30m. This watch is priced at $83,920 USD. patek.com