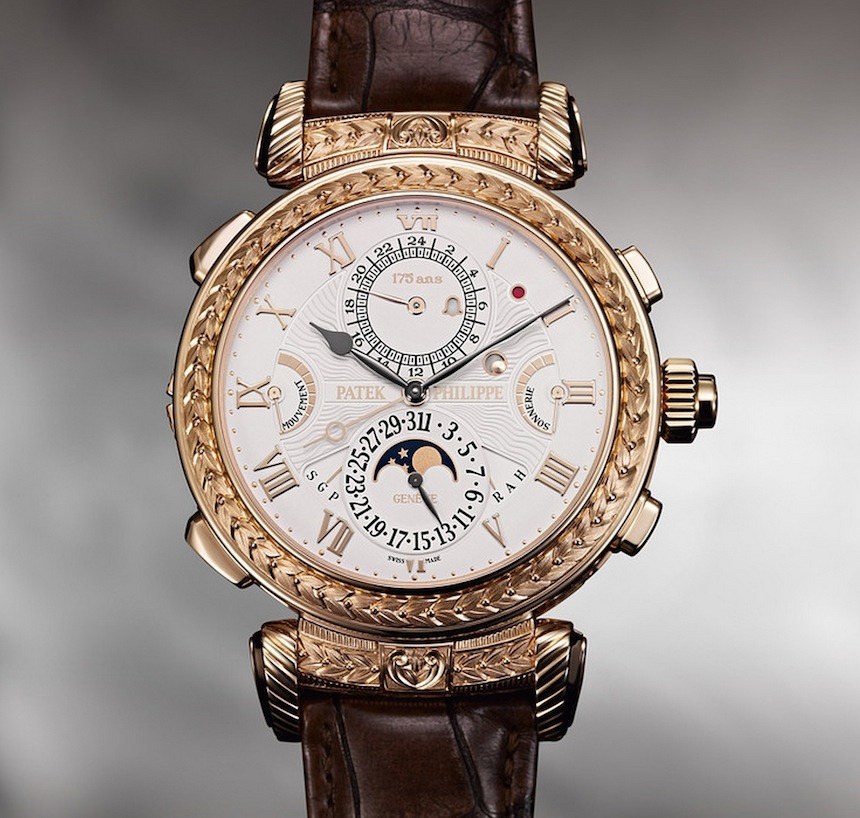 For 2014 and the brand’s 175th anniversary, Patek Philippe has released one of the their most complicated wristwatches of all time. This is no doubt inspired by the company’s iconic Henry Graves Supercomplication pocket watch that was originally delivered in the 1930s and that will be re-auctioned in November 2014. The flagship timepiece that marks the brand’s 175th anniversary is called the Patek Philippe Grandmaster Chime 5175 (ref. 5175R-001)  and it is an extremely complicated watch with two dials and 20 complications – the result of eight years of development according to Patek Philippe.

“Extremely complicated” is a term we are used to hearing when it comes to Patek Philippe – for all the other most notable pieces check out our article on the 17 rarest and most expensive Patek Philippe watches here. The Patek Philippe Grandmaster Chime however comes in at the very top of the food chain, with its massive 47.4 millimeter wide and 16.1 mm thick case and incredibly intricate movement comprising 1,366 components – including three gongs and three hammers and altogether 20 complications displayed over two dials. The case is also reversible, meaning it flips around. The movement also has a unique 3.5 Hz (25,200 bph) frequency.

Beyond stunning figures, the Patek Philippe Grandmaster Chime features a very new, and we should say unexpected, novelty from Patek: a swiveling case. Much like some of the most highly complicated pocket watches of the manufacture, the “GMC” can only manage to display all related information of its numerous complications on not one, but two dials. The heavily engraved 18k rose gold case – which is composed of 214 parts in itself – is suspended between similarly lavishly decorated lugs, and the case can be rotated on the longitudinal axis, allowing the owner to be able to wear the watch with either of the two dials facing up – without having to swap the straps, as seen on some other “two-faced” watches. The idea is to allow the wearer to have either side of the case be the “front.” 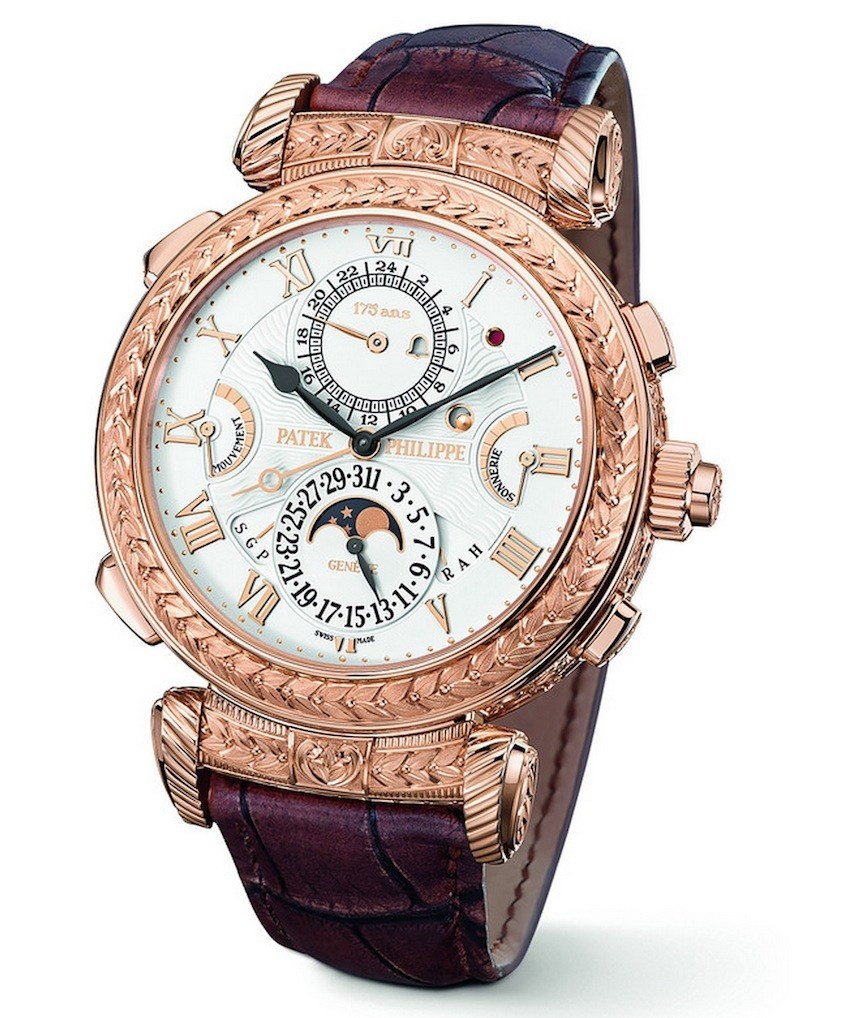 The primary dial of the Grandmaster Chime 5175 displays the hours and minutes on centrally mounted hands – as per normal – however it also hides a number of indications with retrograde hands and small circular apertures. To begin with, the large subdial at the 12 o’clock position is for setting the alarm – with a little bell-shaped aperture indicating whether this function is armed or turned off. Beyond the large subdial at the 6 o’clock position reserved for the phase of the moon and date indications, this side also displays the power reserve for the movement at 9, and that of the sonnerie complication at the 3 o’clock positions.

On two smaller displays surrounding the date’s subdial, the settings for the chiming mechanisms can be tracked: to the left is the display for the Silent, Grande, or Petite settings of the sonnerie, while to the right, the crown’s momentary functionality can be seen: “R” stands for winding, “A” for setting the alarm, and “H” for setting the time. Last but not least, the two tiny apertures scattered at around the two and three o’clock positions serve for the day-night indicator of a second time zone and the “chiming mechanism isolator display” (used to indicate when it is safe to wind the movement without damaging the intricate chiming mechanism). One again Patek Philippe is to be credited in displaying all the indicators on the 5175 watch in a logical and relatively easy to read manner. 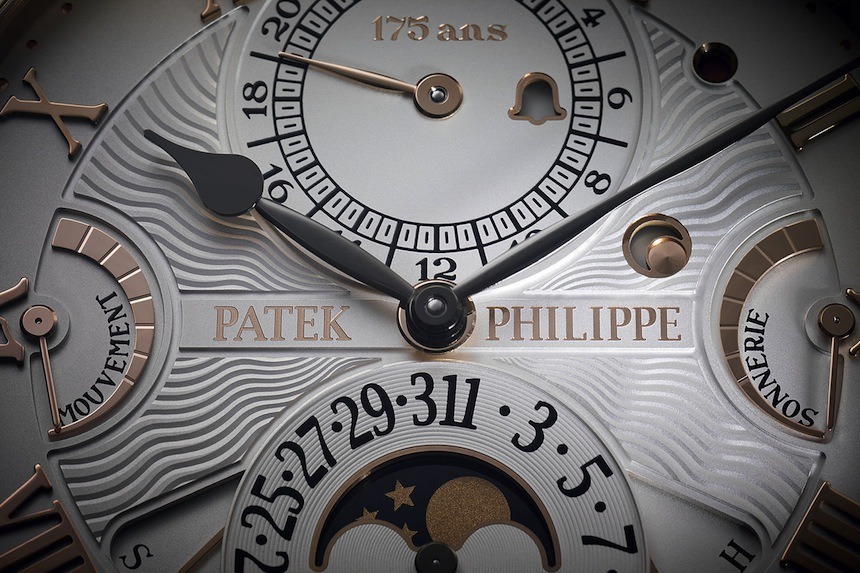 Speaking of which, let’s discuss the namesake complication of this timepiece: the chime. It is no secret that Patek Philippe is very proud of its chiming watches – Thierry Stern, the president of the company, is said to listen to every single chiming watch the manufacture produces, before sending the timepieces out to retailers and their future owners. Therefore, it was expected that Patek would incorporate the chiming mechanism in their 175th anniversary model – and we are not disappointed. The highly complex and completely in-house designed and manufactured movement features a unique chiming mechanism: beyond the grande and petite sonnerie (automatic chimes for every passed hours and quarters), and the minute repeater, it also includes two other, highly unusual chiming complications.

For one, in the 5175R-001 there is an alarm whereas the alarm chimes the set time (say, for 8:15 it chimes 8 hours and one quarter-hour tone), and second, a date repeater function. That’s right, a repeater that chimes the date: after pressing the button at the 4 o’clock position it will chime a combination of high and low tones for every 10 days, and then it will chime the single digits as it would chime the minutes. Therefore, the Patek Philippe Grandmaster Chime 5175 is not only true to its name, but it may very well be the most complicated chiming wristwatch ever made. 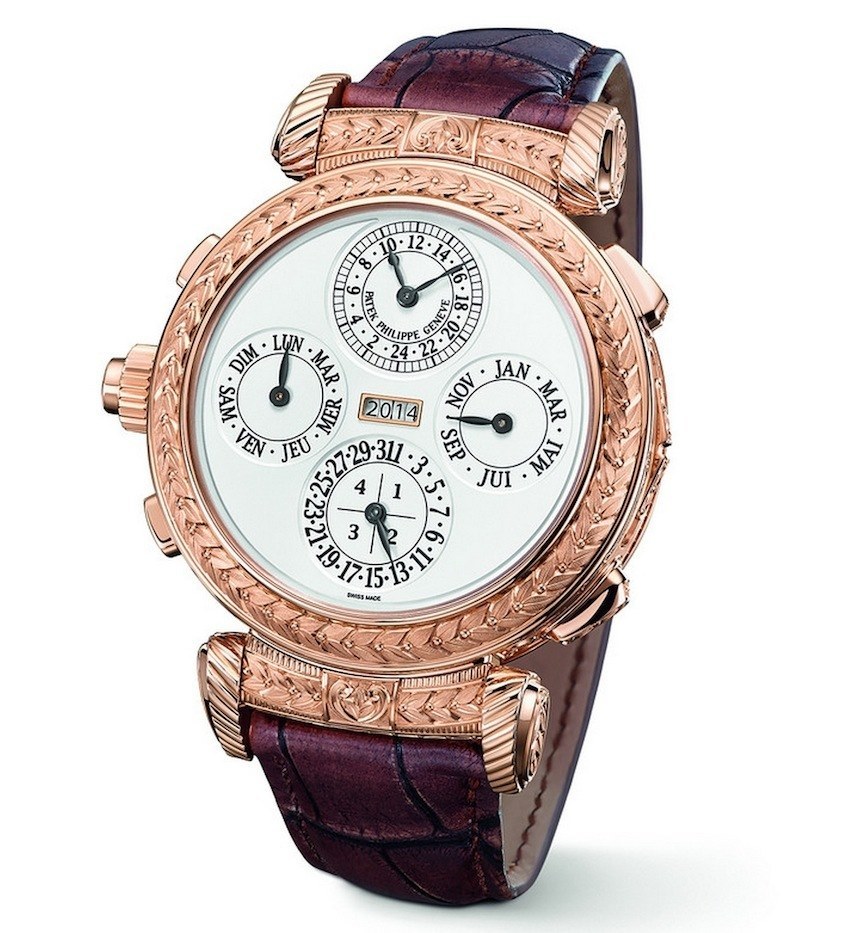 Speaking of the date, the secondary dial of the Patek Philippe Grandmaster Chime 5175 is dedicated to the perpetual calendar, which features four subdials and a display – sounds complex enough, so let’s see what every one of these do, one by one. The larger dial at the 12 o’clock position of the “case-back” displays the time on a 24-hour display – likely serving as a GMT display, beyond the primary time display seen on the other dial. In the center is a display for the year, which is located between the subdials for the day and month indications. Finally, at the 6 o’clock position, is a display for the date, as well as the leap year. 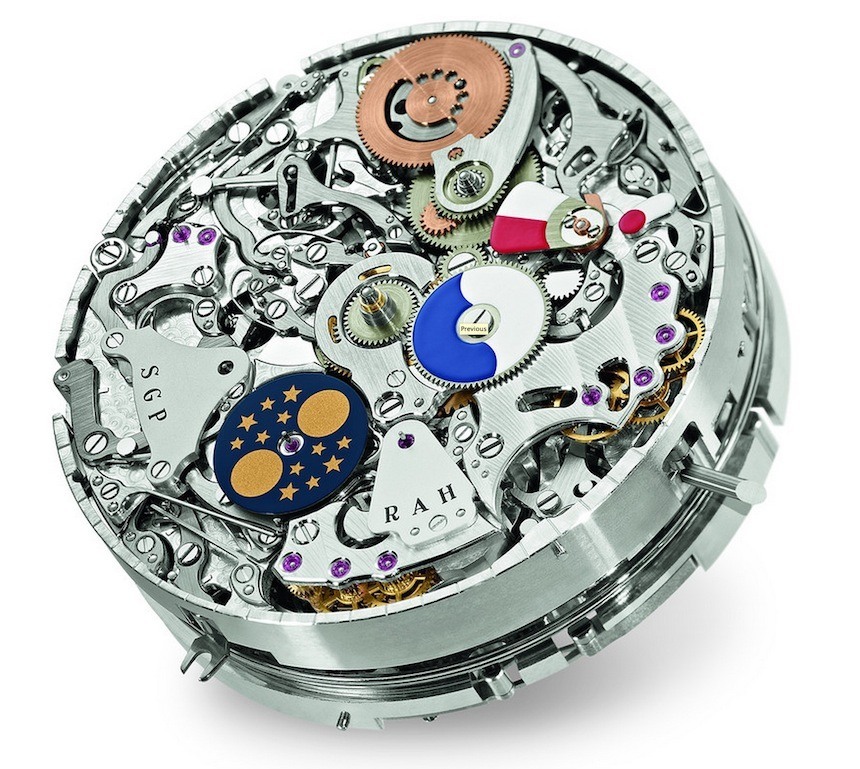