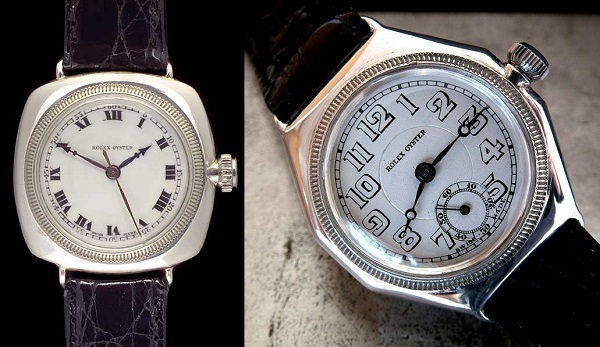 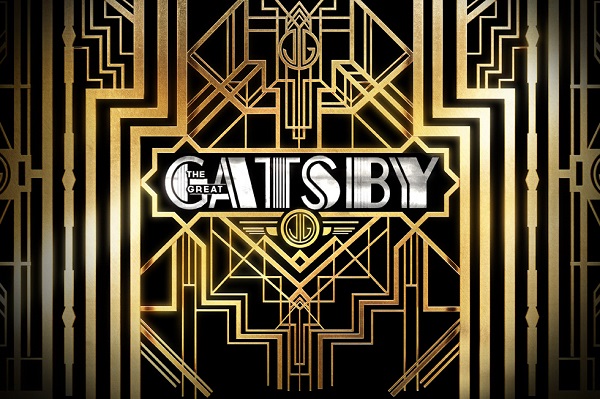 With the 2013 movie adaptation of The Great Gatsby book being released shortly, we wanted to take a look at some of the best wrist watches from the roaring 20s. The 1920s, in a sense, was the first real decade of the wrist watch. It was when both men and women started to adapt wrist watches over pocket watches. Some of the best brands that make watches today were around back then, and of course the dominant design ethos of art deco was a major influence of watch design. In The Great Gatsby, author F. Scott Fitzgerald focuses on the ultra-wealthy, who would have been keen to adopt the latest high-end trends and styles.

The end of World War I created a shift in the minds of many men who originally saw wrist watches as feminine. Soldiers from the war often adapted pocket watches with lugs so that they could be strapped to their wrist. This was not the birth of the wrist watch, but helped cement their manliness in mainstream culture. 1920s era timepieces were quite bold in their designs compared to watches from two or three decades later.

In rounding-up interesting watches that would fit into the world of The Great Gatsby, we looked at both vintage watches actually from the era, and watches from today, based on styles from that era. Let us know what you think and if there are pieces that you feel are missing that should have been on the wrists of people in the 1920s.

In the 1920s Rolex released the Oyster, which was the first water resistant watch with a patented case with a screw-down crown and caseback that Rolex still uses by name today. “Oyster” is still in the official name of many Rolex watches. The Oyster had a recognizable hexagonal or cushion-shaped case with a clear dial that on most versions had Arabic numeral dials. The Oyster was not exactly a diving watch, but as a water resistant timepiece it was certainly good for swimming, and general wear. Most Oyster watches came with precious metal gold or sterling silver cases. A true classic, the Rolex was a pivotal part of Rolex’s long term success and would have certainly been on the wrist of active high-society men in the late 1920s. [Image credits: Sonning Vintage Watches, Vintage Watch Company] rolex.com 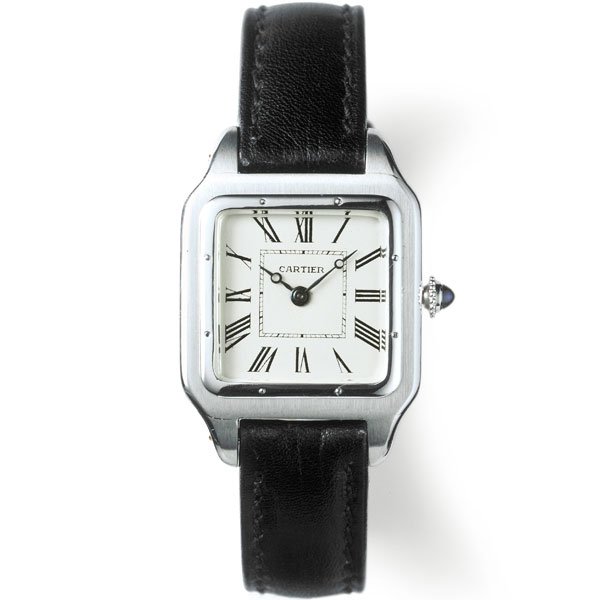 In the 1900s Louis Cartier developed a watch for his pal Alberto Santos-Dumont to be worn in the early days of flight. The Santos is considered to be the first ever “mass produced” timepiece exclusively designed to be worn on the wrist, and first went on sale in the 1910s – so it is a bit before the 1920s, but it is such a classic it is worth being on the list. The Santos is still produced today by Cartier, and has spawned a range of models over the years. Modern Santos piece still resemble the original with their elegant square case, distinctive bezel, and classically legible dial. cartier.com 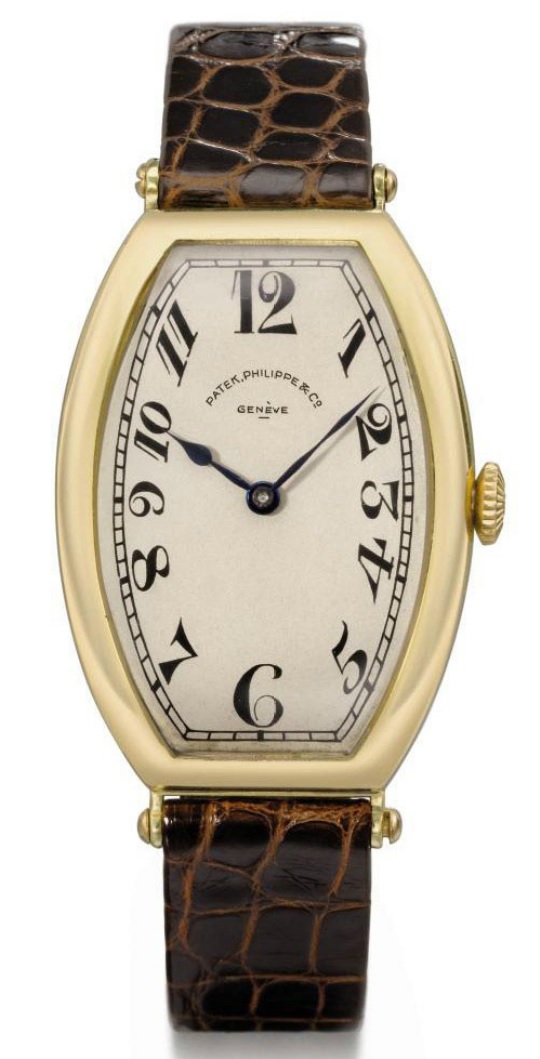 High-end Swiss watch maker Patek Philippe was historically much more experimental in their designs than they are today. For many years, the famous brand experimented with a variety of different designs, some borrowed by brands even today. This lovely piece in an 18k gold tonneau (barrel) -shaped case used art deco style Arabic hour numerals and epitomizes the style-forward thinking of watch design in the 1920s. [Image credit: Christies] patek.com 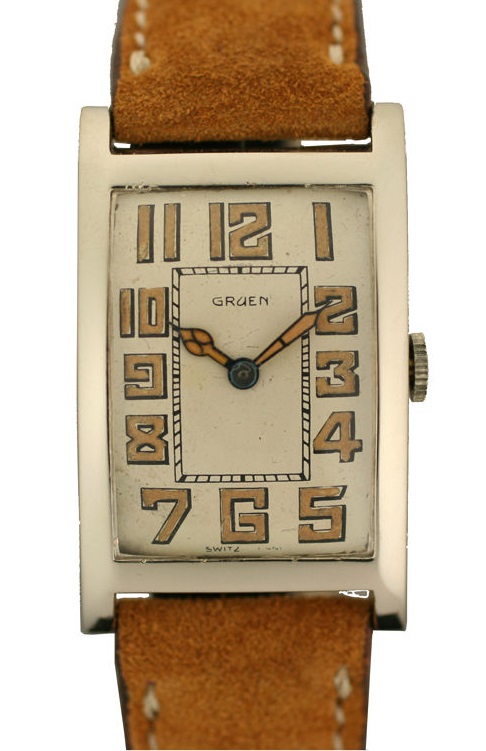 Rectangular watches were often called “Tank” shaped, as a reference to a design popularized by Cartier. This Gruen Tank-style watch is another lovely angular art deco era design that show an emphasis of bold yet original hour indicators and hands. Such hands and hour indicators were painted with luminant for darkness viewing, which was a much newer feature then than it is today. Gruen is known for having made some of the most iconic art deco style timepieces of the time. [Image credit: Matthew Bain Inc.] 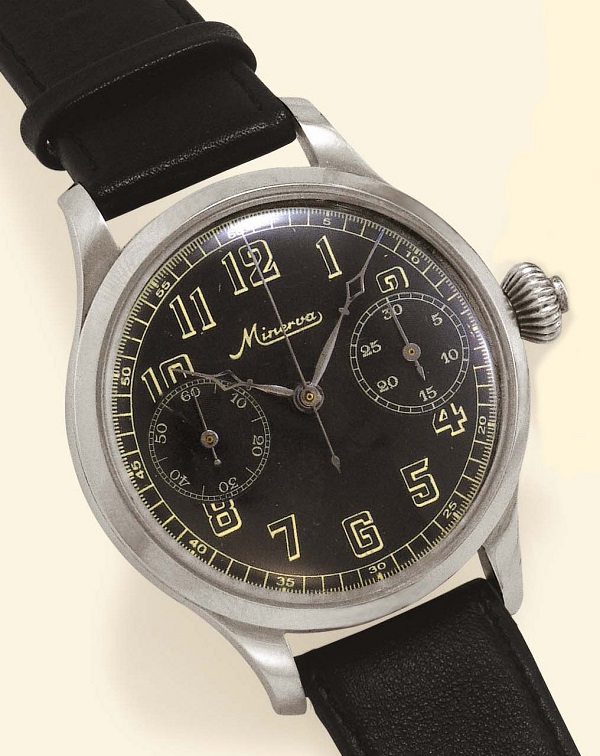 The utility of a stopwatch inside of a wrist watch prompted the development of chronograph wrist watches as soon as could be done. A famous and historic producer of chronograph wrist and pocket watches is Swiss Minerva. The company was purchased a few years ago and now exists under the aegis of Montblanc, who now produce their highest end pieces there. Chronograph watches make for excellent sport watches – being able to time events, they were a choice pick for all types of racing activities. This 1920s era Minerva has a monopusher chronograph pusher built into the crown, and a lovely black dial with distinctive art deco style hands and hour indicators. 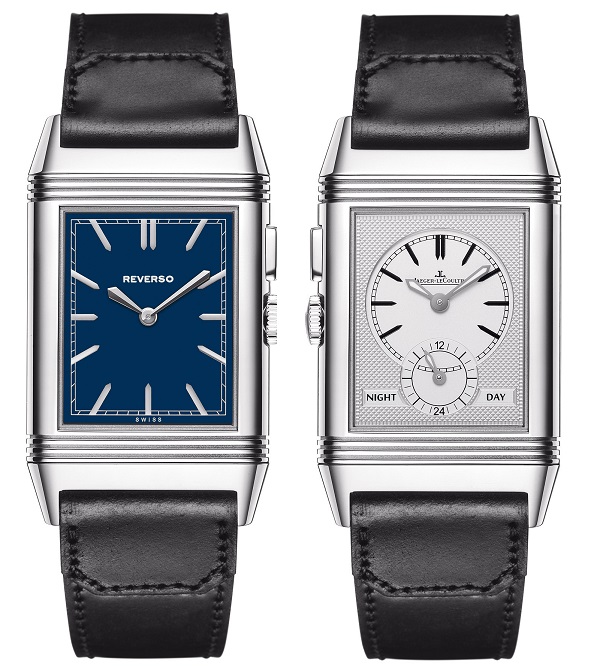 This blue version of the Reverso Ultra-Thin is new for 2013, but mimics one of the original colors used on the Reverso watch collection. Missing the chronological mark by just a little bit, the Reverso family of flip face watches didn’t come to market until 1931, but chances are that it was being developed in the 1920s. It is worth being on the list as the Reverso is one of the iconic (and enduring) art deco style timepieces that is sold today. Timeless and masculine, the two dials offer different time zones and a glorious recreation of a 1920s style design [See an aBlogtoWatch Review of a Jaeger-LeCoultre Reverso watch here.] jaeger-lecoultre.com 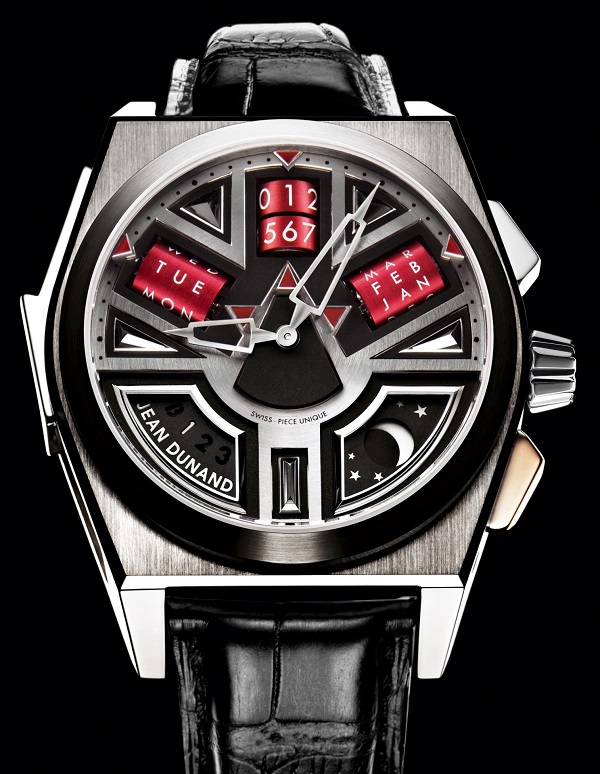 The ultra-high luxury Shabaka watch from art deco artist inspired watch brand Jean Dunand is a regal nod to the enduring qualities of 1920s style. With a complex movement produced by Christophe Claret, the Shabaka contains an perpetual calendar with moonphase indicator as well as a minute repeater. A handful of Shabaka watches were produced, and only a character with the wealth of Jay Gastby would be able to invest in something from Jean Dunand. [See a hands-on look at the Jean Dunand Shabaka watch here.] jeandunand.com 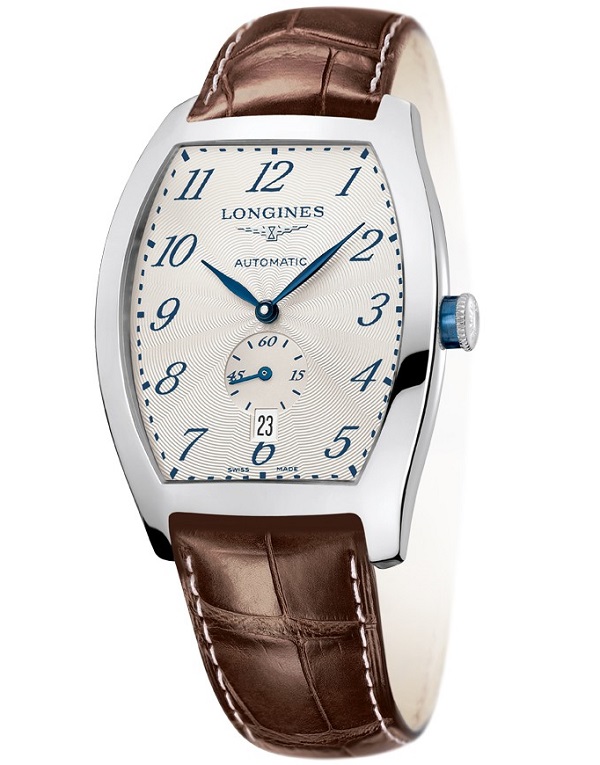 Longines, being among the more relatively affordable producer of Swiss mechanical watches, is typically retro in their design ethos. Many of their watches would fit into a 1920s theme with ease, and the brand was in fact producing wrist watches in the 1920s. The Evidenza collection of tonneau-shaped case watches offers a dressy 1920s era look with a simple yet decorated dial in contrast to many of Longines’ more sporty vintage style timepieces. longines.com 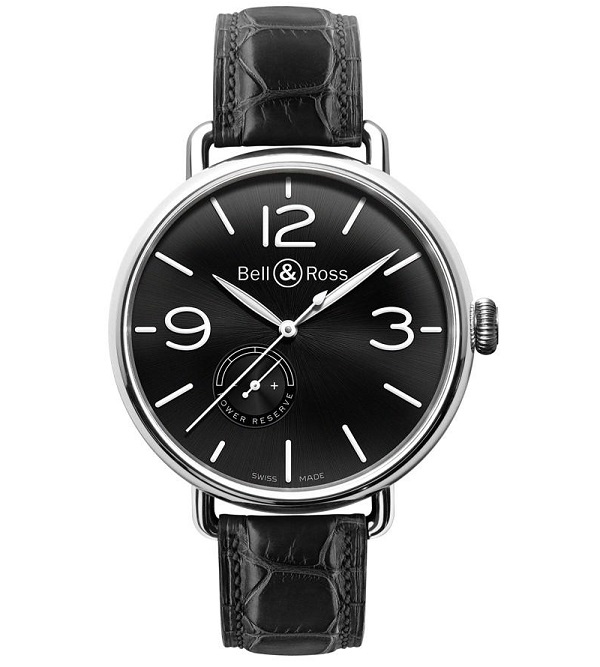 The “WW1” name of this Bell & Ross watch collection means two things. First it refers to “World War I,” as the design of the piece is meant to hearken to adapted pocket watch cases that later became wrist watches when soldiers opted to weld strap bars in them. Second, it refers to the related notion of “wrist watch 1,” as such pocket-to-wrist-watch conversions were among the first men’s wrist watches around. The historic look has been coated with a sleek modern interpretation that is still retro in flavor. Several versions of the 45mm wide watch are available, including the above Bell & Ross WW1-97 with a power reserve indicator.  [See a hands-on look at Bell & Ross WW1 watches here.] bellross.com 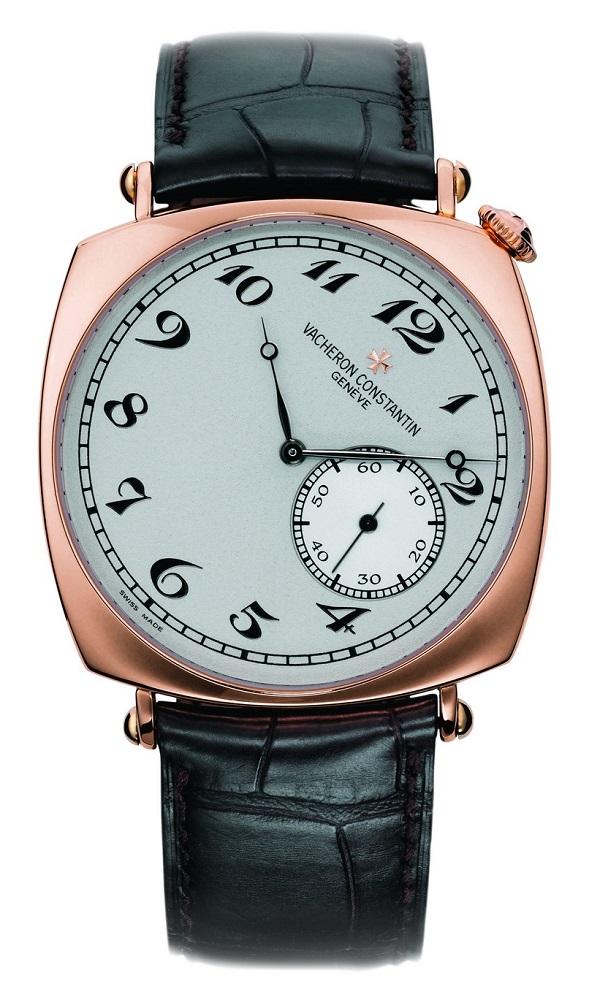 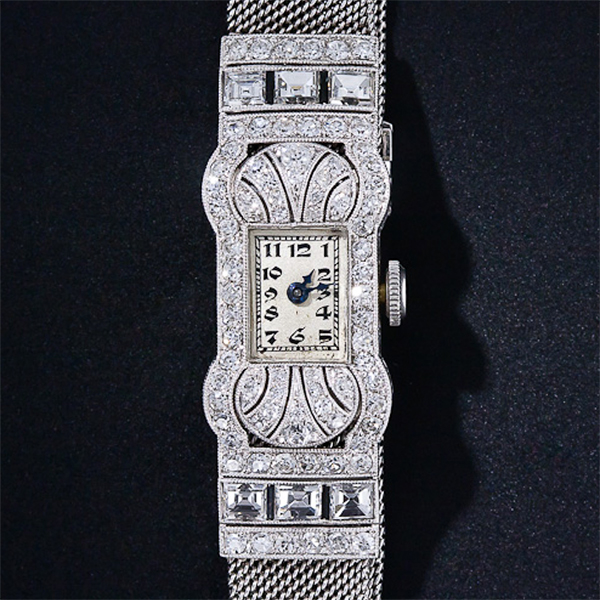 “Her voice is full of money.” – Jay Gatsby says suddenly about Daisy Buchanan

At the height of his wealth, had Jay Gatsby given Daisy a watch in his efforts to impress and woo her, it might well have been a watch like this Art Deco style watch from Lucerne-based Gübelin. This watch has a platinum mesh band with two rows of three square step-cut diamonds, each separated by tiny, slender black onyx baguettes with matching diamond set buckle and an 18-jewel movement. The watch has a total diamond caret weight of 2.85. Diamond-framed rectangular and square faces with platinum, white or yellow gold mesh and bold geometric gem-traced shapes found in the bracelets and buckles were all the rage in the 1920s amongst those with established wealth, the Nouveau-Riche, victorious suffragettes, revered silent film stars, rebellious short-haired flappers and bootleggers’ Molls, alike. In the 1920s, when a woman said she wanted a diamond watch, this is what she was talking about.

“The truth was that Jay Gatsby, of West Egg, Long Island, sprang from his Platonic conception of himself… he invented just the sort of Jay Gatsby that a seventeen-year-old boy would be likely to invent, and to this conception he was faithful to the end…”

It was in the early 1920s that the Gübelin family watch making business, established in 1854, recognized the need for a better understanding of the gems they set, due to the perfecting of a process which created synthetic gems, first used in 1902 with rubies. Fake gems were getting tougher to discern from the real ones, thereby threatening the stability of both the jewelry and watch industries. And so, the father of a future forefather of modern gemology and Eduard Jakob Gübelin’s first son, Eduard Moritz Gübelin, took the reins of the company in 1919, established the first European gemology laboratory, and opened the watch company’s first outlet in New York — where the city’s first Diamond District was forming, and where Jay Gatsby might well have picked one of these up for Daisy. Today, the Gübelin Gem Lab is one of the world’s most prestigious gemological laboratories and Gübelin continues as an upper-echelon luxury watch brand led by fifth-generation Thomas Gübelin. [Image credit: Lange Antique & Estate Jewelry]  guebelin.ch  gubelingemlab.ch

“Gatsby believed in the green light, the orgastic future that year by year recedes before us. It eluded us then, but that’s no matter — tomorrow we will run faster, stretch out our arms farther…. And one fine morning — So we beat on, boats against the current, borne back ceaselessly into the past.”