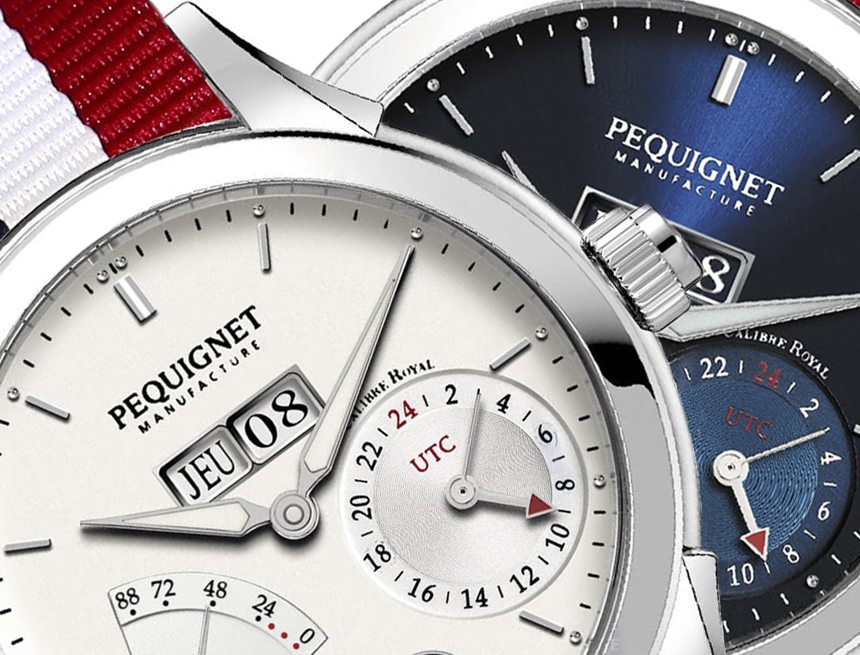 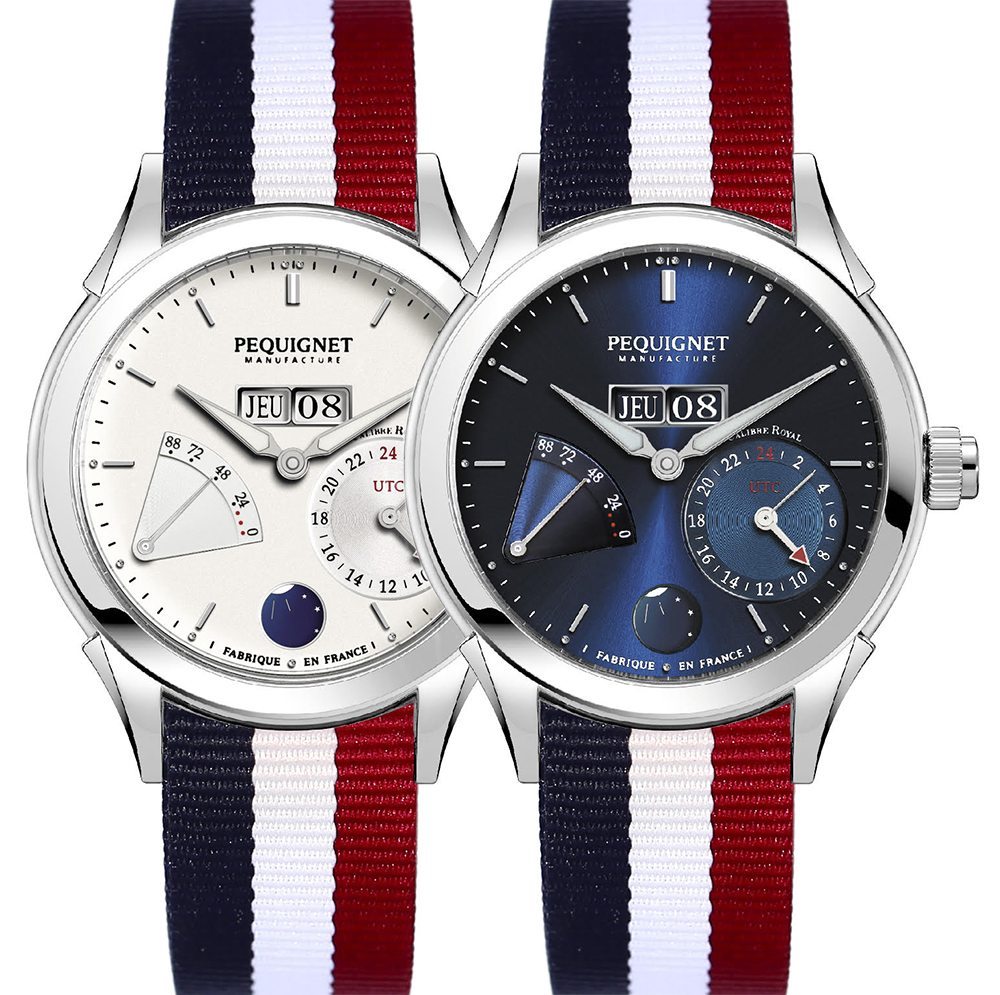 It’s nice to see some watches from France sometimes because I have wondered why there aren’t more of them. There are French-based brands and famous French watchmakers, but you will often find the “Swiss Made” label on their dials. Pequignet is a rare watch company that can claim to fully produce watches in France, and the theme of this Pequignet Rue Royale GMT watch is all about being French. Beyond the liberté, égalité, and fraternité, however, is also some some satisfying horology to keep you interested.

Pequignet is a small independent company based in Morteau, in the French department of Jura that borders the Swiss canton of Jura. The area historically had a watchmaking industry, but today that basically means Pequignet is very close to Switzerland’s most concentrated watchmaking region – but is, of course, firmly located in France. So Pequignet is likely able to benefit from that proximity in various ways while boasting fabriqué en France on their dials. Not that watch brands headquartered around the world do anything short of acrobatics to qualify for a Swiss-Made label, but “Made in France” is a distinguishing factor and one that likely doesn’t come across as low-rent either. The best of both worlds, it would seem. 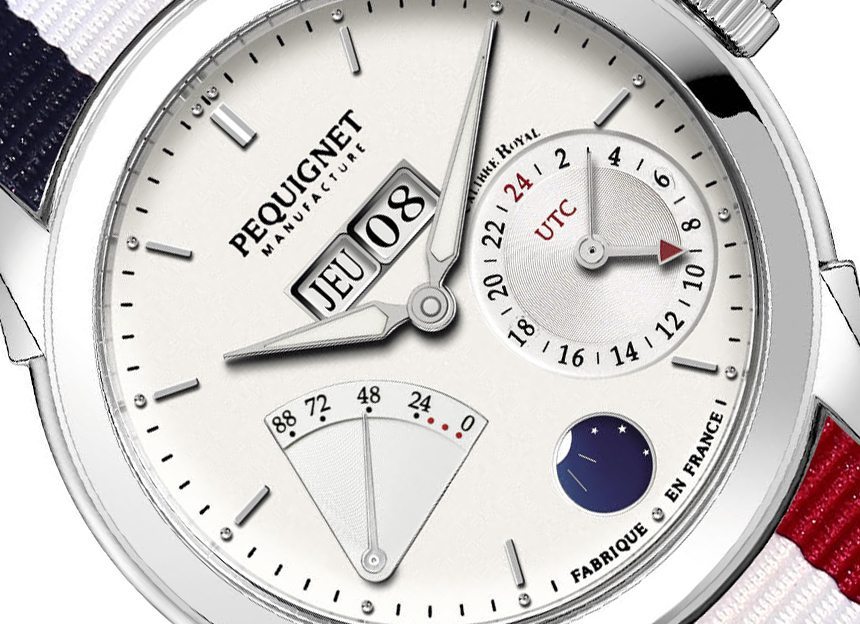 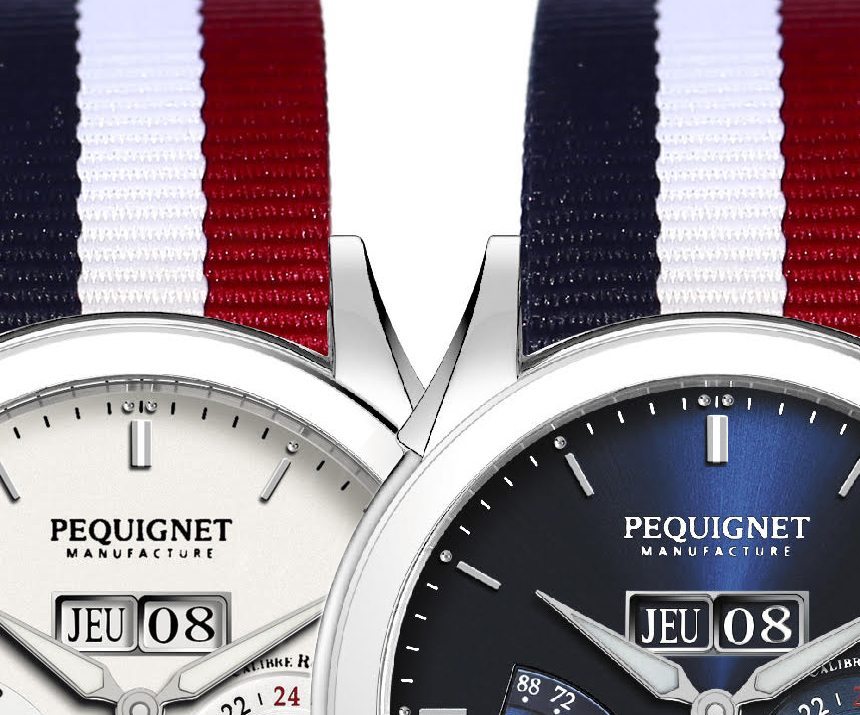 The Pequignet Rue Royale GMT watch is in the brand’s “Manufacture” collection which includes various lines that are easy to distinguish because their names tend to use the term “Royale” in reference to their “exclusive” movement. “Manufacture” in this context usually indicates some level of in-house production, and like other brands, Pequignet offers collections with sourced movements (mostly Seiko – and they are open about naming those) alongside its Manufacture line.

The brand was founded in 1973 and has been producing their own “Calibre Royal” movements since 2011 which are “entirely designed, prototyped, tested, and assembled” at their Haute Horlogerie Pequignet laboratory in Morteau. We cannot expect even much larger brands to be producing 100% of their own components in-house, and while customary secrecy regarding suppliers is maintained here, the brand proclaims its intent “to work with French producers to promote French industry.” We have seen such initiatives in neighboring countries, so I look forward to more like this from France as well. 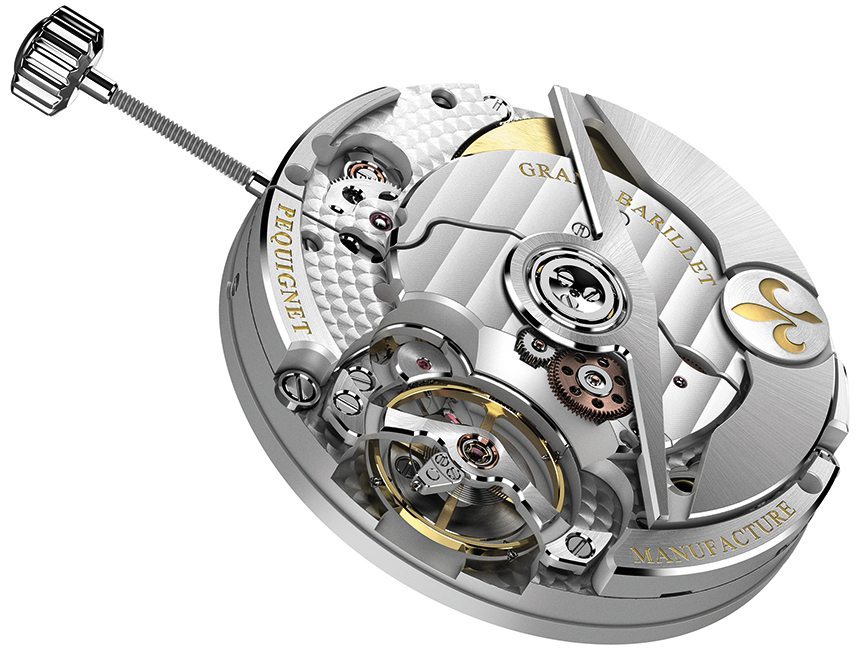 This is not only among the rare movements produced in France, but the automatic Calibre Royal is interesting for its design which incorporates a host of complications – and you will notice the dial layout it proscribes across the brand’s Manufacture lineup, amounting to some distinctive design language. The movement, the brand notes, is designed to be thin by incorporating all the complications into the mainplate. Further, there are numerous ergonomic tweaks that are not immediately apparent but that show the thought and care that went into the movement’s development – you can read more about these watchnerdy details on the brand’s website here. 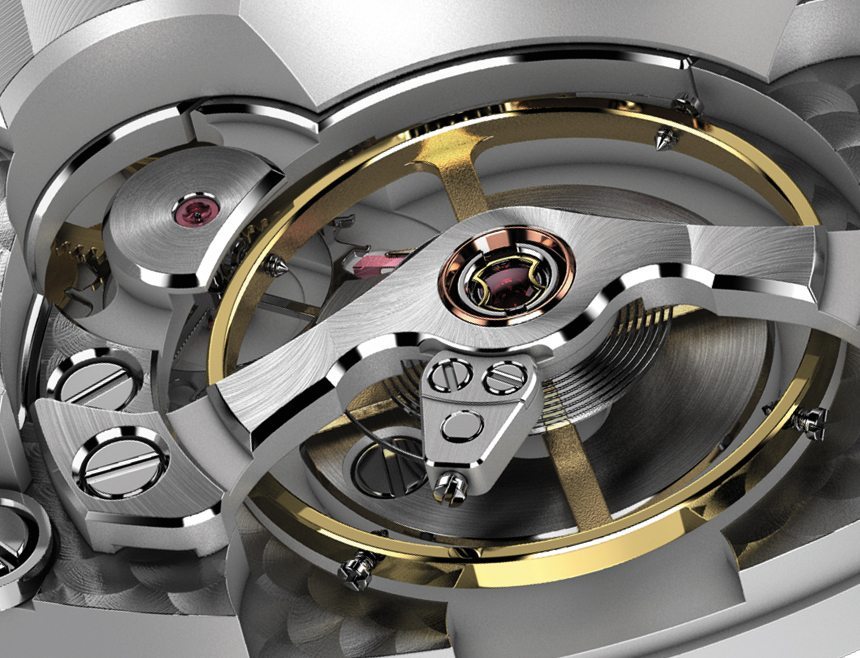 So, how is all that engineering translated into an attractive and useful dial? The Pequignet Rue Royale GMT’s second time zone is displayed at the 4 o’clock subdial in combination with the seconds, and the GMT hand is advanced using the pusher that is integrated into the crown. At 6 o’clock is a day/night indicator that seems a little functionally redundant since the second time zone is displayed on a 24-hour scale, and I would probably prefer a moon phase as some of their other models have in the same position on the dial – here, I’ll chalk it up to a touch of whimsy among the other very practical set of complications.

The indicator at 8 o’clock displays the quite respectable 88-hour power reserve provided by a large, central barrel. Running at 3Hz with a large balance spring, one may tend to assume that that long power reserve is the result of some compromise, but Pequignet emphasizes the movement’s accuracy and promises 72 hours of “exceptional isochronism.” 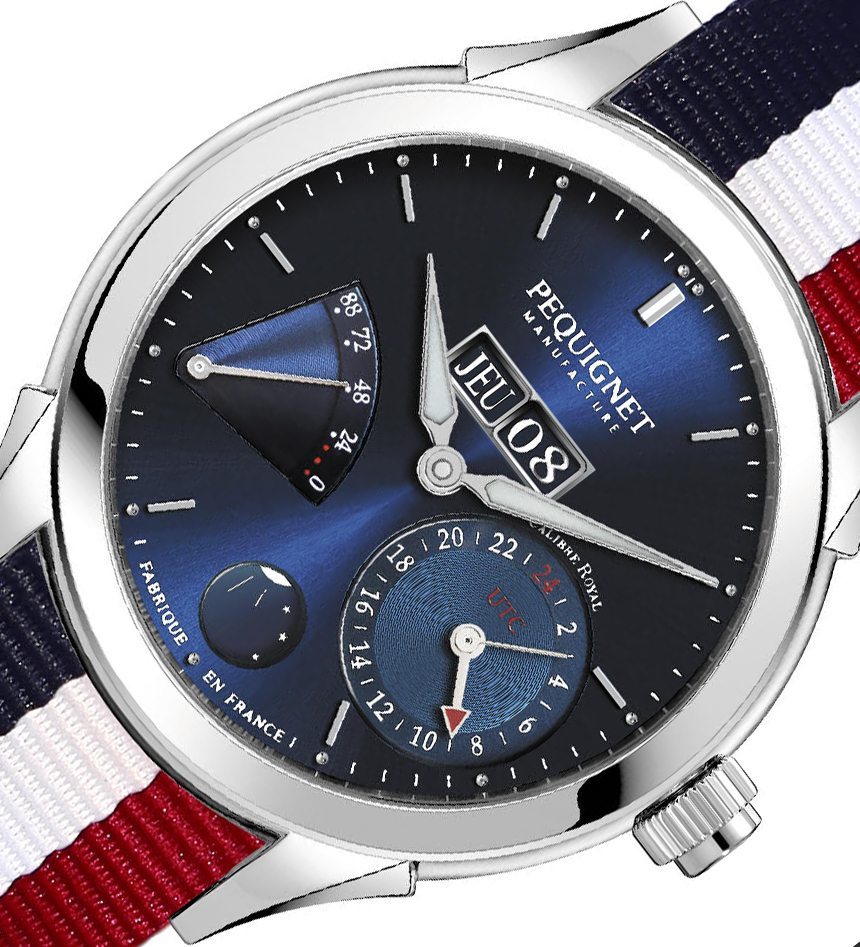 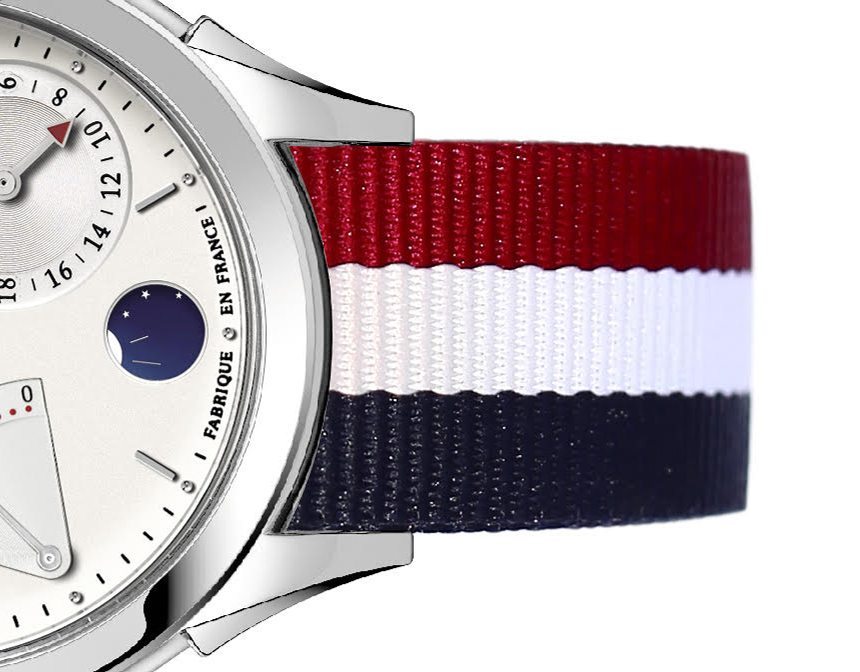 The 42mm stainless steel case is rated water resistant to 100m, promising a reasonable level of durability, as does the sapphire crystal. While the hour and minute hands are lumed, I’d like to see even more lume on the dial. Some people may feel that all-polished cases such as this one do not lend as high-end an impression as those with mixed finishes, but it does not seem unfitting for the watch’s styling. The horn-like lugs give the case profile a touch of distinctiveness. With this particular release that focuses on the French theme, there don’t appear to be any changes from the brand’s existing Rue Royale GMT except the addition of a red, white, and blue nylon nato strap – and you’ve probably seen similar nato straps before – so let’s focus on the watch itself.

Below 12 o’clock are the day of the week and the grande date (using two disks to display the date’s two digits) which jump instantaneously at midnight. The brand claims that this is the only watch combining a GMT and a “triple instantaneous jump” feature. The brand is understandably proud of their proprietary movement, so one would think they would at least provide some images of the display caseback, but no such luck for now. Pequignet has at least succeeded in piquing my curiosity. 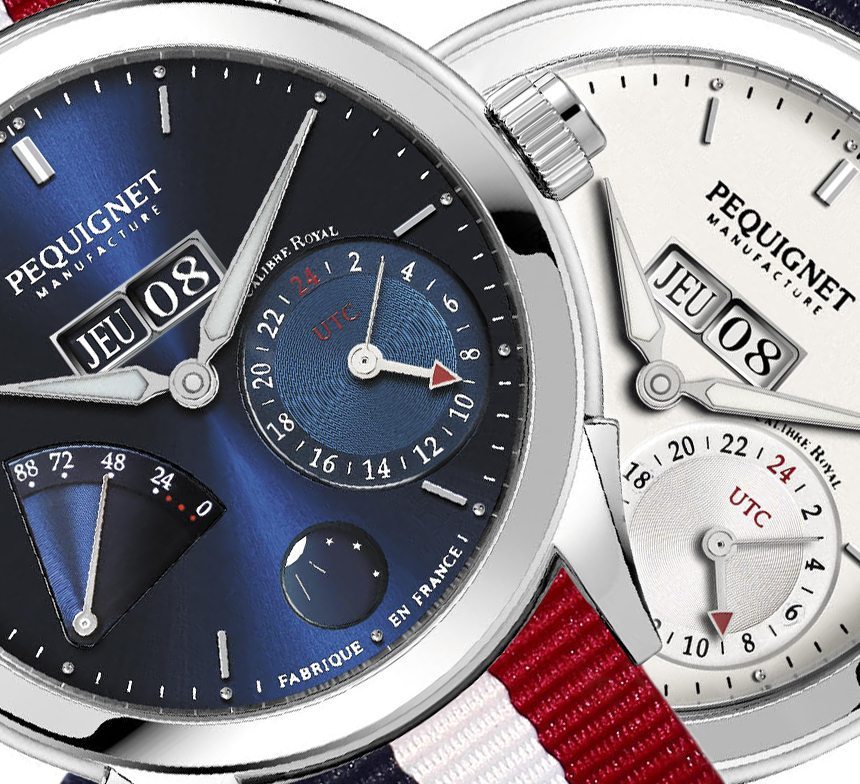 Even if this were not a France-themed watch, I am happy to see that as a French company they actually use French consistently – Fabriqué en France, the day of the week – I would have been disappointed if it said “Made in France,” say, but that is just me. Fortunately, I studied French for years; unfortunately, I have mostly forgotten it, but I think I could pull off basic communication with this watch. The styling of the Pequignet Rue Royale GMT displays an elegant sensibility that the French do so well, and to me, both the caliber and the watch’s design have a strong personality once you look a little closer. It can only look better in person than in these renders.

The Pequignet Rue Royale GMT comes in two versions, one with a silver opaline dial and one with a blue sunburst dial, each with highlights to match the French flag. This release with the nato doesn’t add anything to the price of the standard version, and the watch also comes with the alligator strap – brown for the white dial, and matching blue for the blue dial. With genuinely useful complications, a unique movement with a lot of practical features and a some distinctive characteristics, the price of the Pequignet Rue Royale GMT at €7,500 should not stop you from looking more into this lesser-known brand. pequignet.com