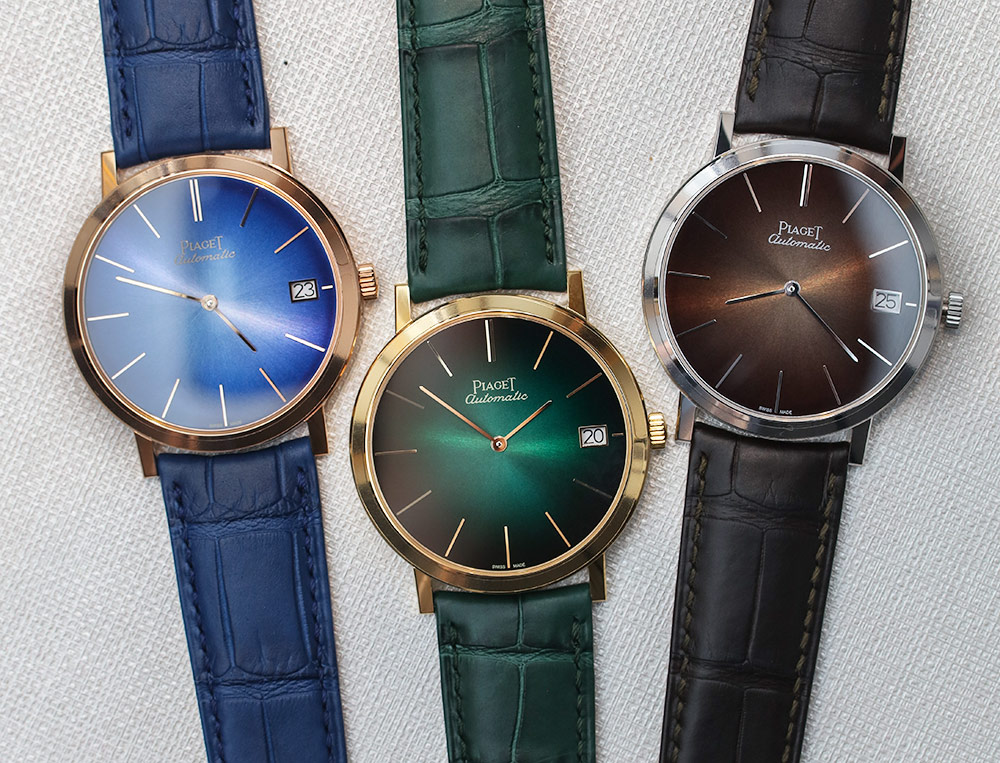 Piaget combines its expertise in ultra-thin movements with its fearless use of color to celebrate the 60th anniversary of the Altiplano model. The seven pieces in the new Piaget Altiplano 60th Anniversary series, introduced at the SIHH in January, range in size from 34mm to 43mm. One of the great things about the new models is that they are not necessarily gender-specific. I say not necessarily because while Piaget specifically refers to the 34mm size as a ladies’ watch, I saw a man try it on at the presentation in Geneva, and it looked great. The dial is billed as pink, but it’s really more red, and red has long been a man’s timepiece color as well as a woman’s. 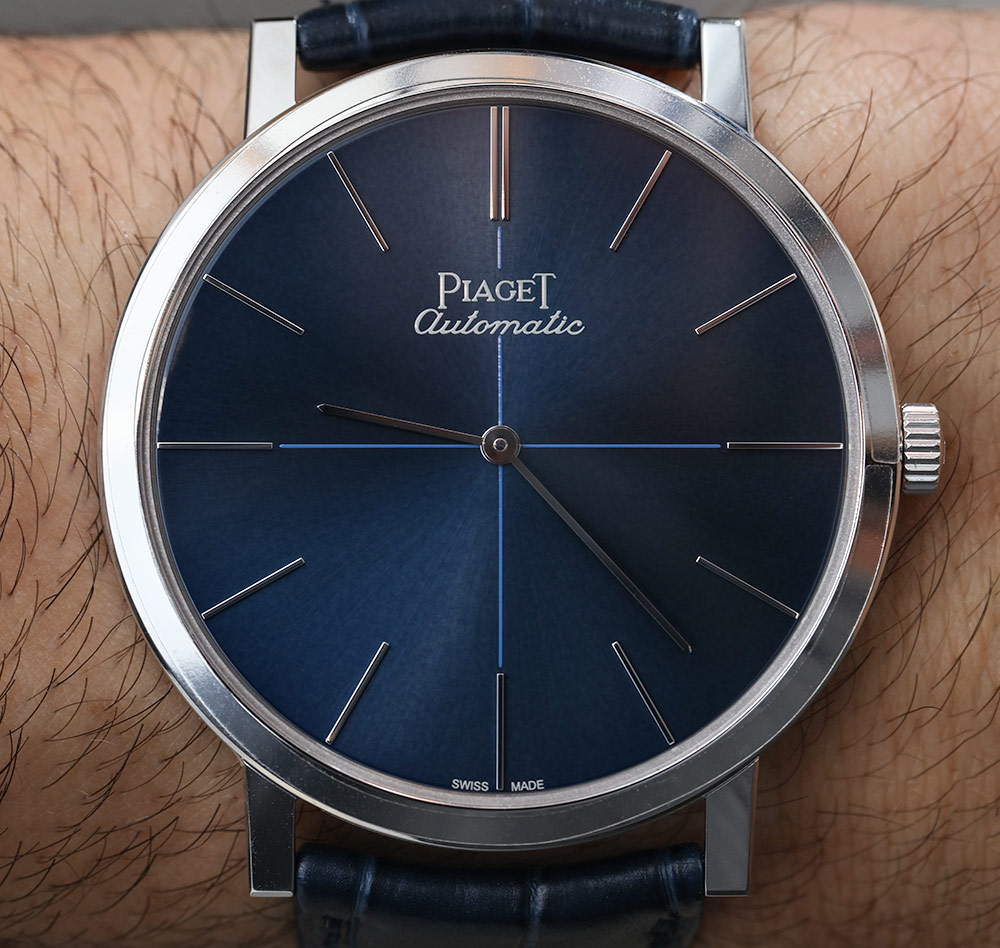 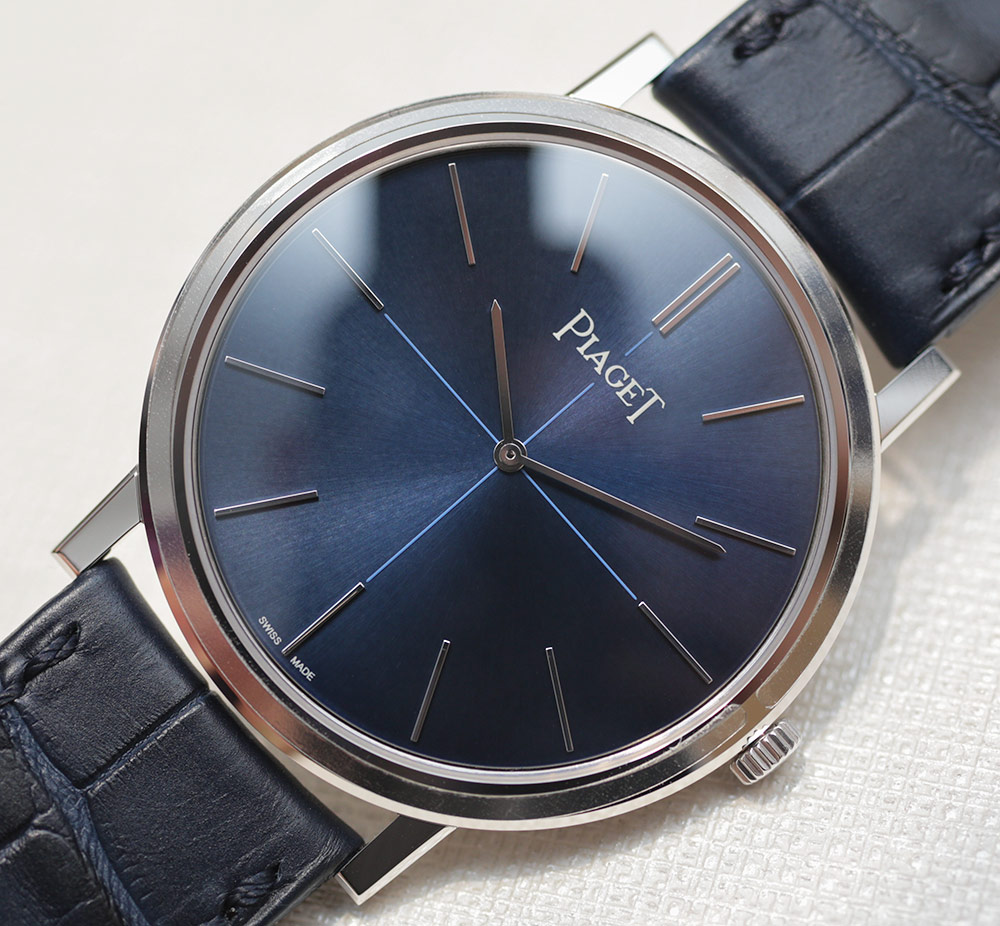 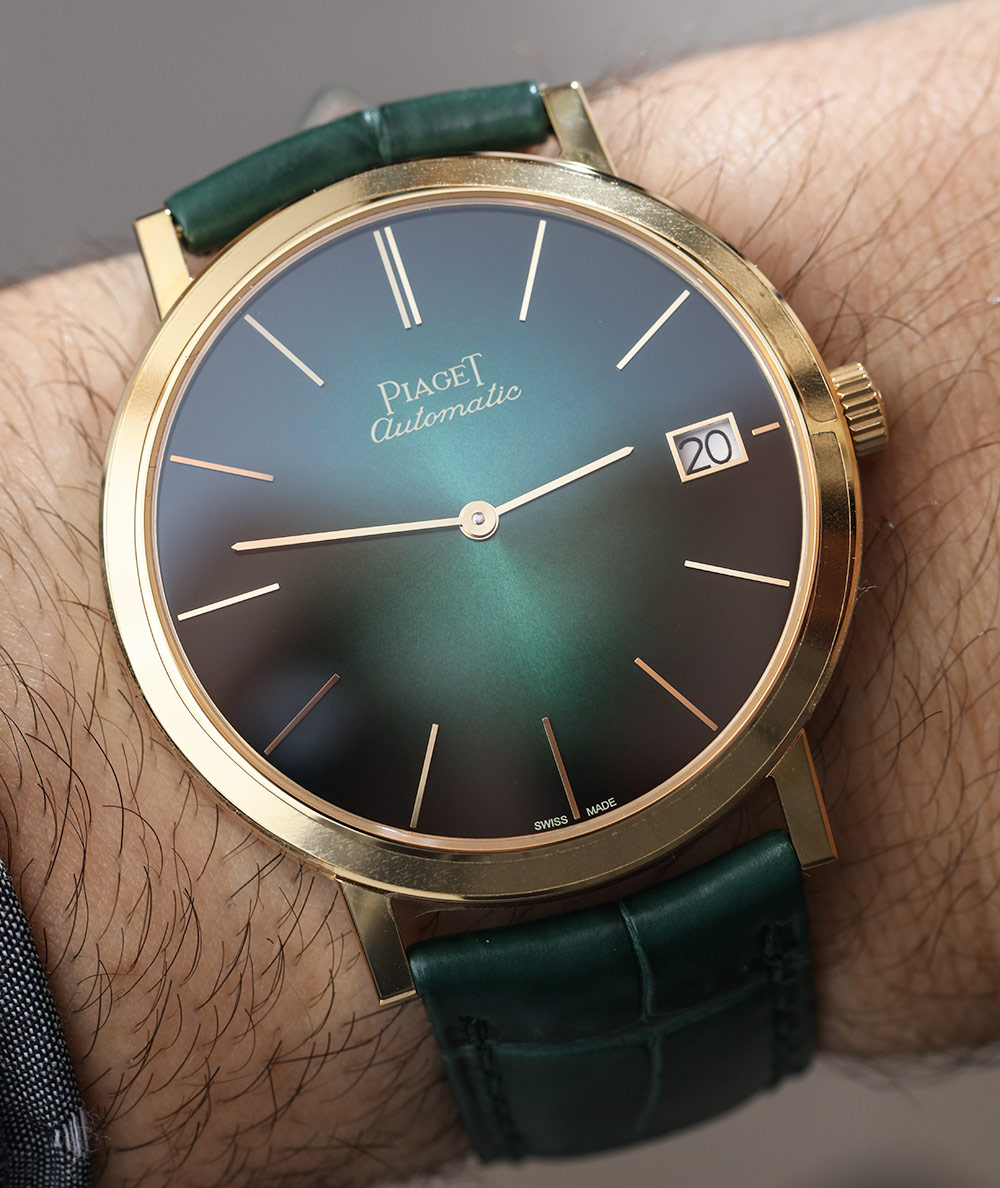 The beauty of these watches is the dial treatment. Piaget chose primary colors in subtle graduated hues radiating out from the dial which, combined with the minimalist design, seems almost bold. As Piaget says, it is a style “stripped of anything superfluous,” and that it is. The Piaget Altiplano collection was originally named for the eponymous high-altitude plateau of the Andes Cordillera mountain range, with its stark landscape. There are lots of purists out there who do not want to see even a date window, and there are options for them here (as well as those who prefer the date window).

The primary colors are what make the series universally appealing to either gender. A lighter hue of red (pink) would be too feminine, as would a lighter blue or green. 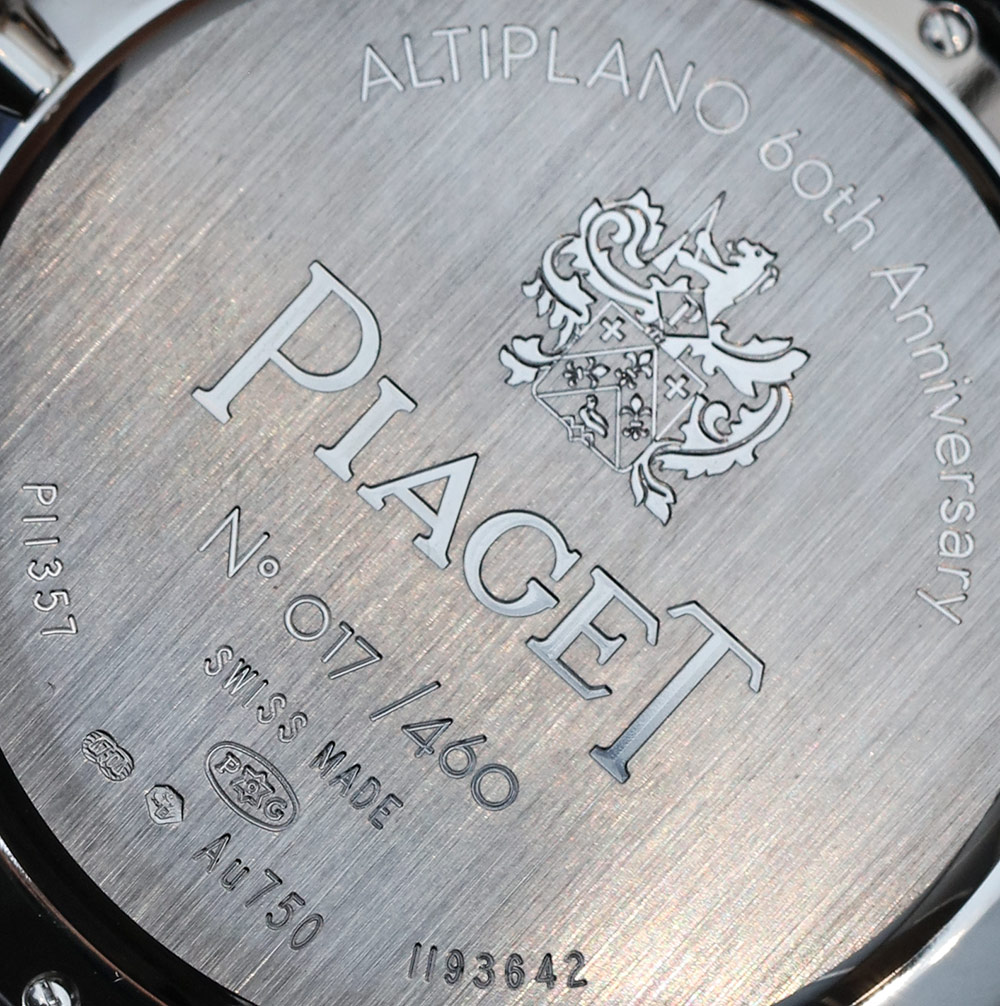 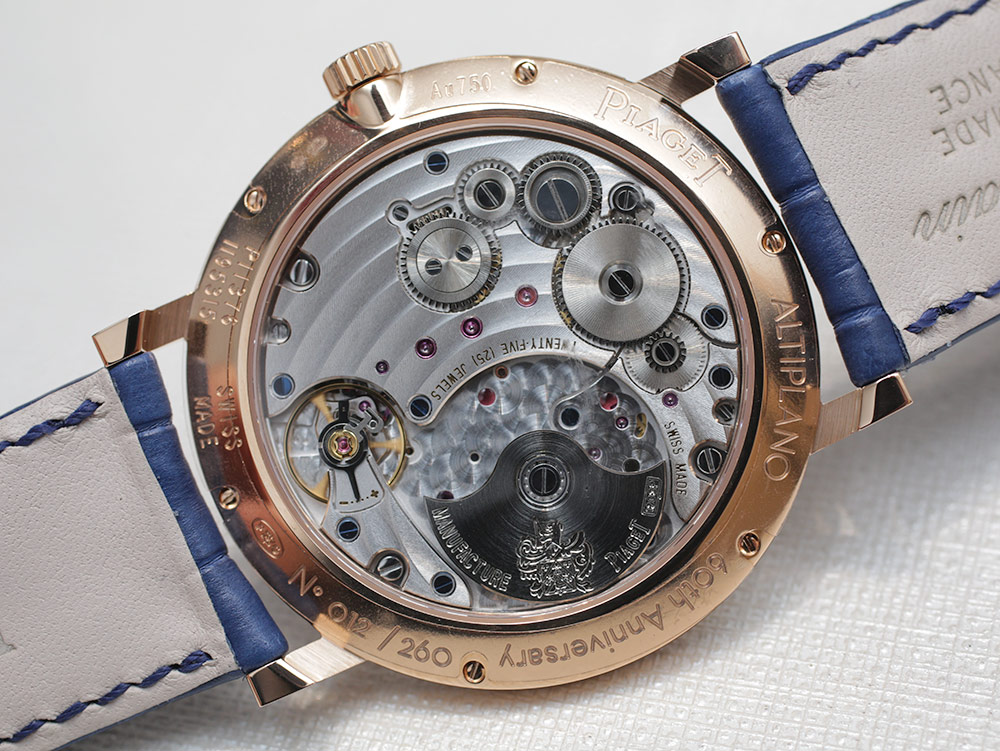 The “men’s” 40mm manual-wound versions, in blue, grey or green, could easily be worn by a woman – in fact I prefer that size, even over the 38mm automatic, since the ultra-thin case makes it highly wearable. As a great classic, everyday watch, it would have been great to see at least one of the anniversary models in steel, though – maybe next year without the anniversary engraving on the case back? Note that some models have an exhibition case back while others have a closed case back. 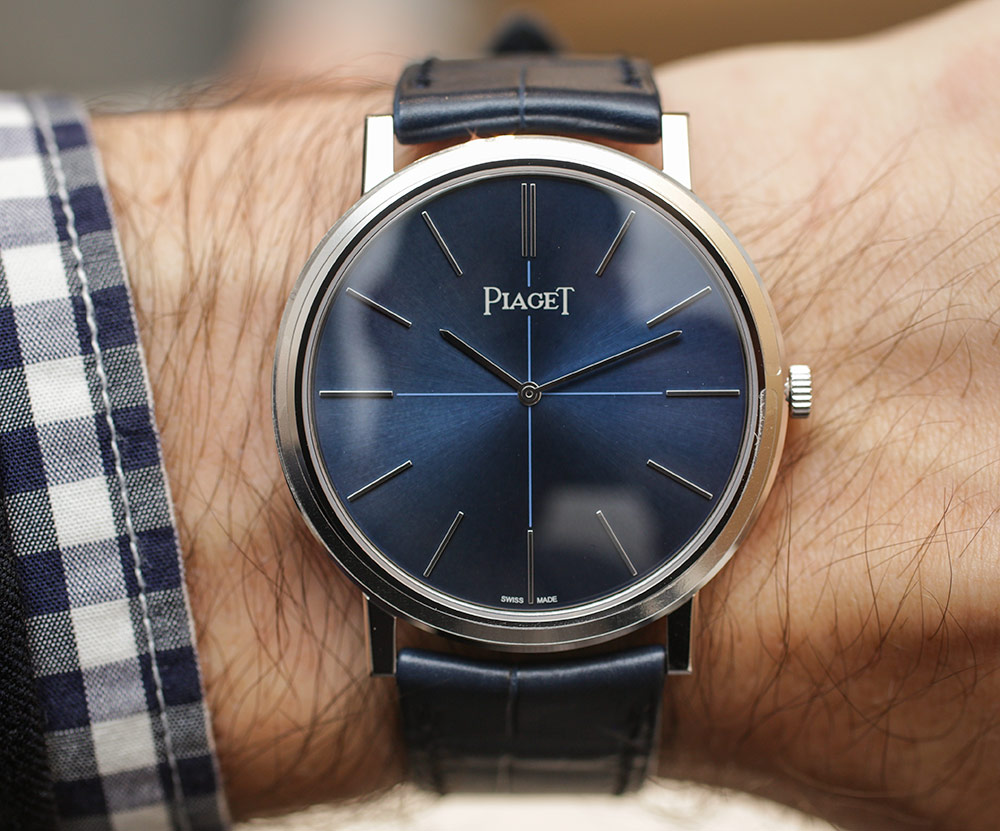 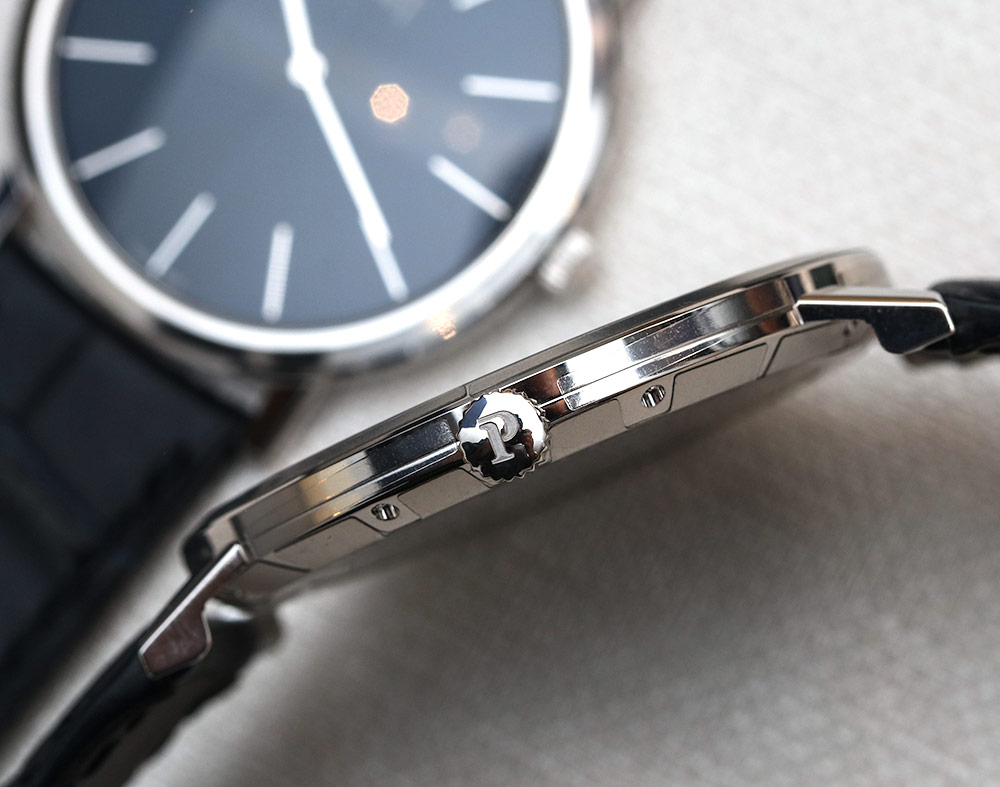 The 34mm model contains the ultra-thin manual-wound Caliber 430P, which is 2.1mm thick. The case is 6.30mm thick, in white gold or red gold. There is also a diamond edition of the 34mm piece, in a 360-piece limited series. The next size up is the manual-wound 38mm model (also with the 430P, in a 6mm-thick case) but with a blue dial that is marked with a subtle cross-hair in a lighter blue color. 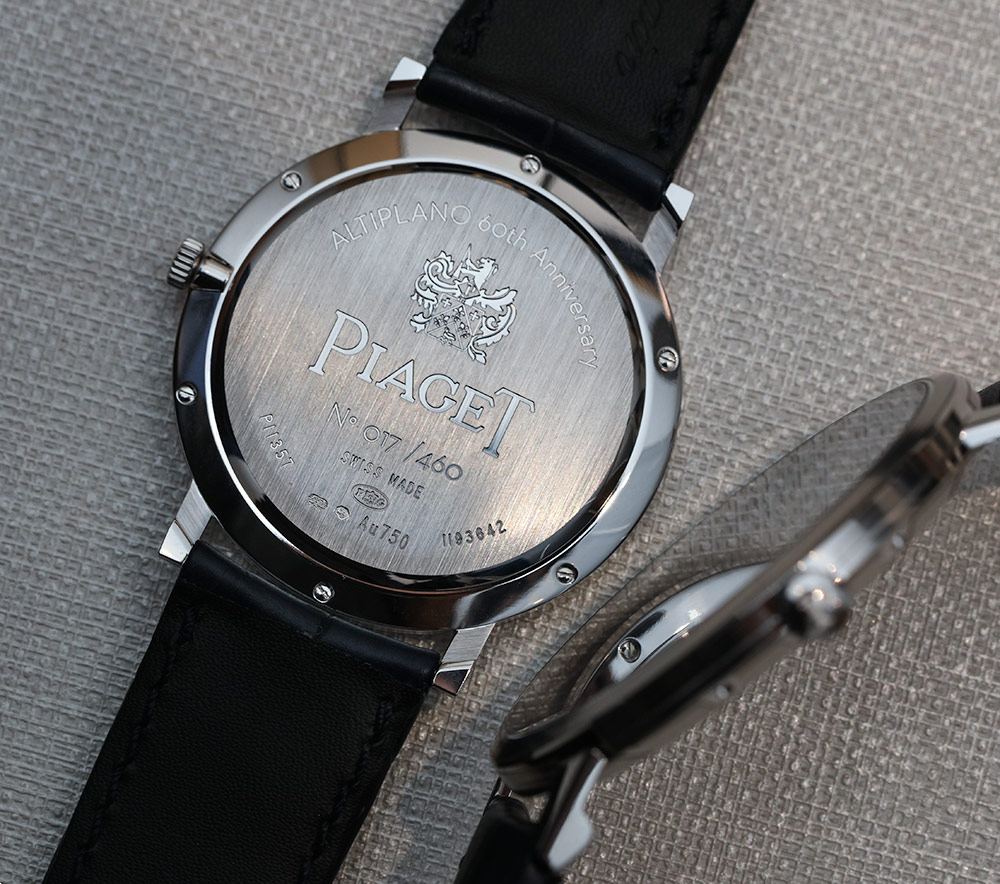 The Caliber 430P is an evolution of the 9P, the ultra-thin (2mm thick) manual-wound movement introduced by Piaget in 1957. Found in the 34mm and 38mm no date Piaget Altiplano watches, the manual wind 430P movement is 2.1mm thick and operates at 21,600 vph with a 43 hour power reserve. 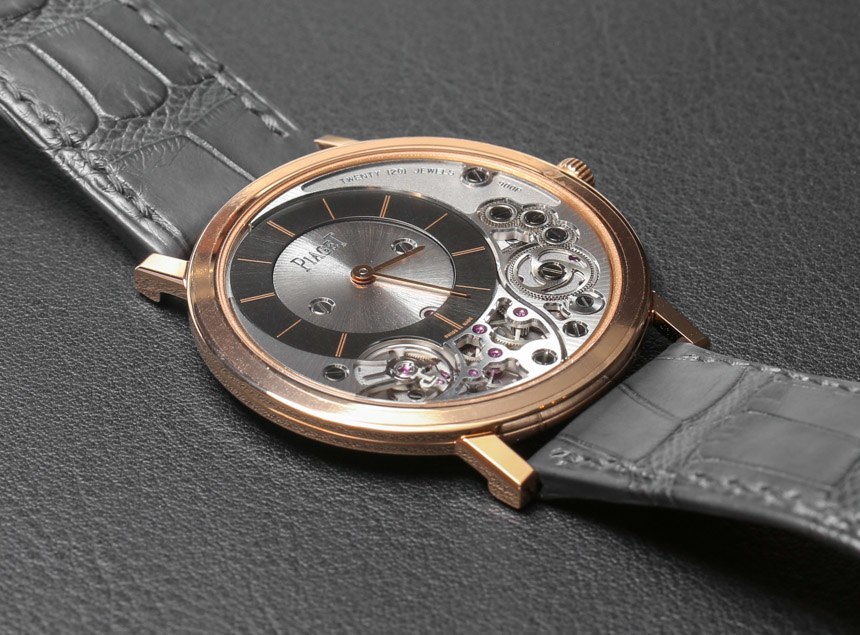 Just to tie together the hisotry of these ultra thin movements by Piaget, the 9P was followed up in 1960 with the 12P, an ultra-thin self-winding caliber measuring just 2.3mm. In 2014, to mark Piaget’s 140th anniversary, Piaget introduced the 900P, which marked the brand’s 14th world record for an ultra-thin caliber (at the time they were introduced). The 900P is a movement, dial plate, and base plate in one, with hands integrated on the same level as the movement components. It represents the world’s thinnest mechanical watch, at 3.65mm thick. 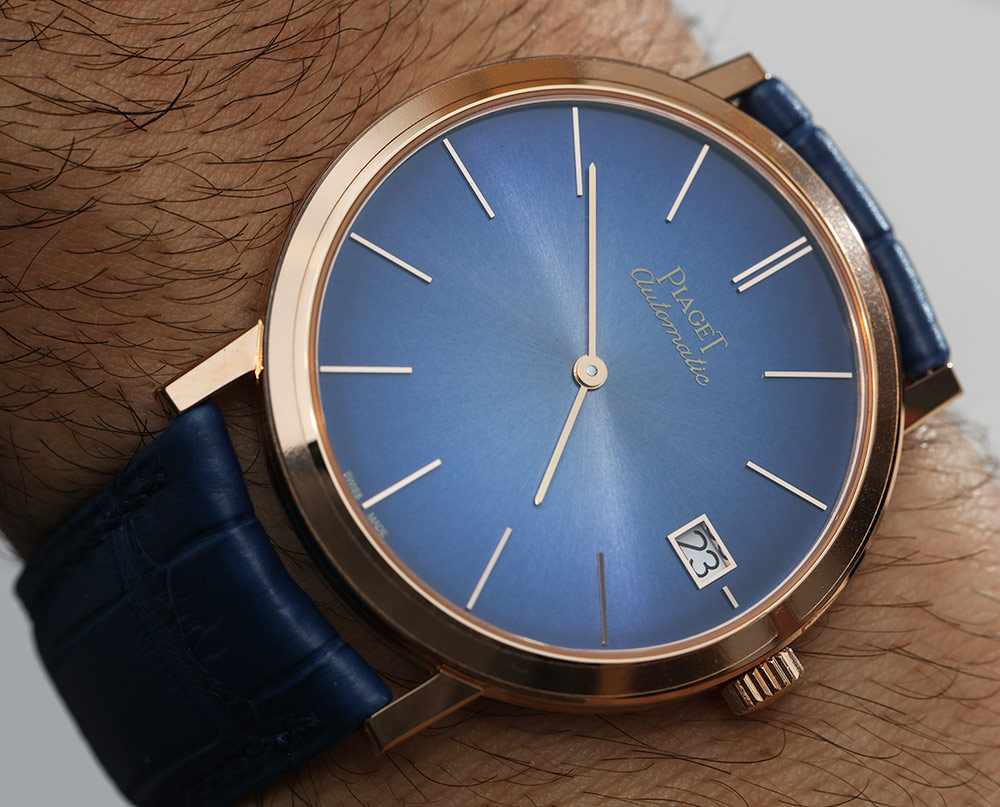 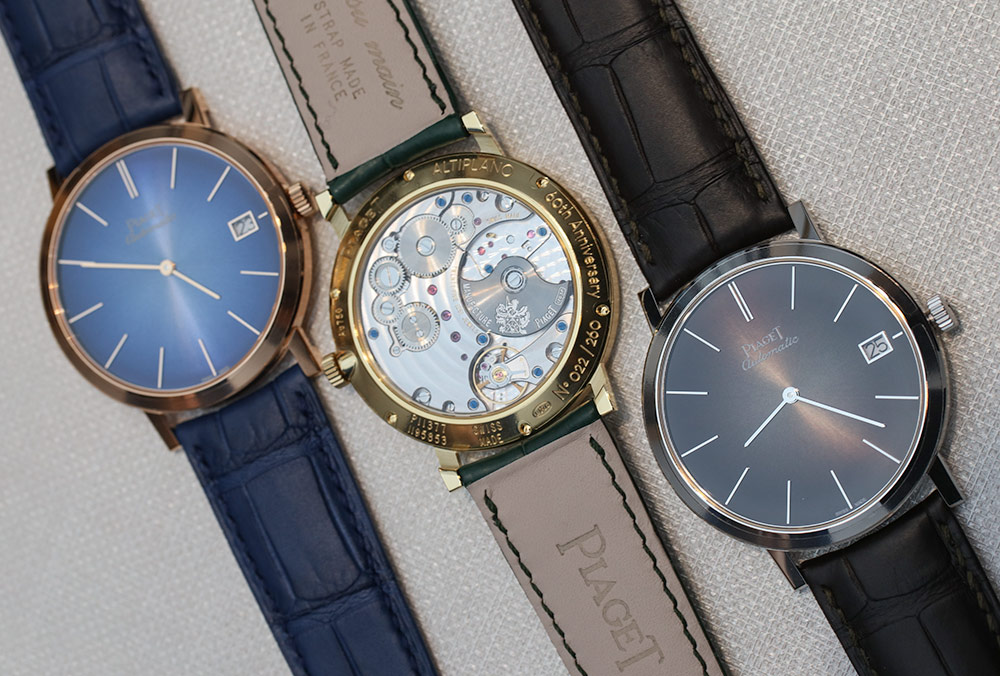 There are two automatic options in the anniversary collection and they are also ultra-thin. The 40mm model contains the Caliber 1203P, with an added date window and a case only 6.36mm thick. The movement itself is 3mm thick, and operates at 21,600 vph with a 44 hour power reserve.The 1203P movement was inspired by the Caliber 1205P, with a date and small seconds, which Piaget has been using since 2013. The 1203P still has a date window, which makes it a great everyday watch, but there is no seconds function. In fact, none of the anniversary pieces have seconds hands, which is a sacrifice you make when every extraneous millimeter is eliminated for the sake of a slim profile. 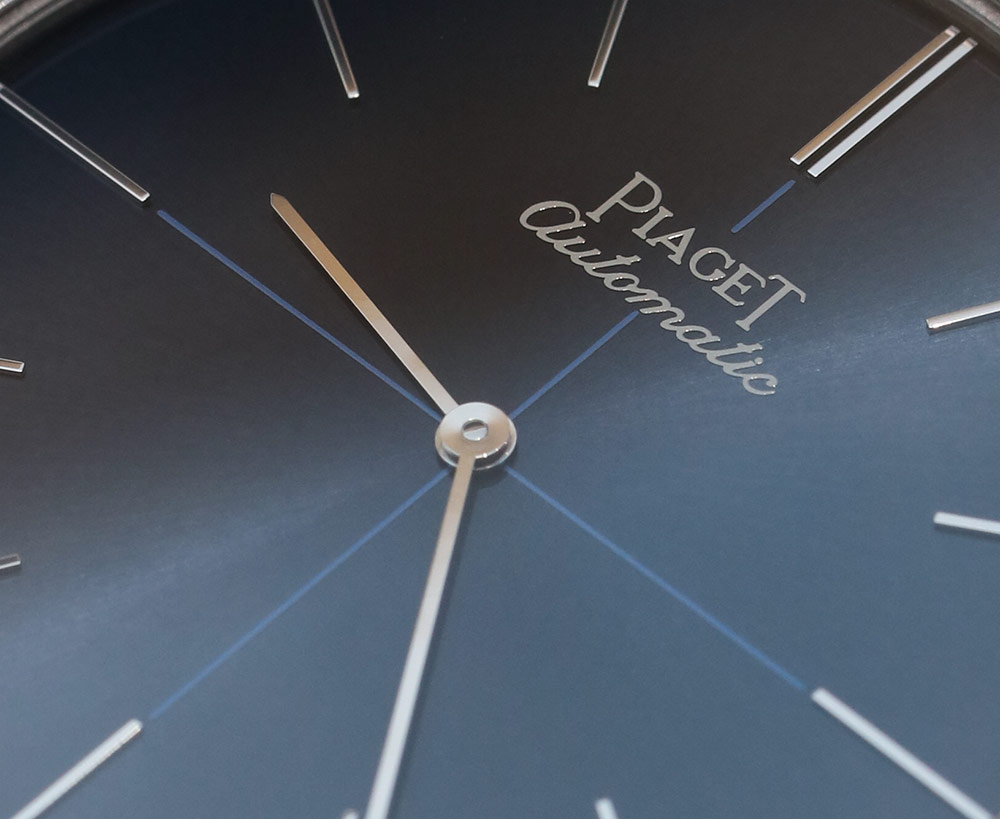 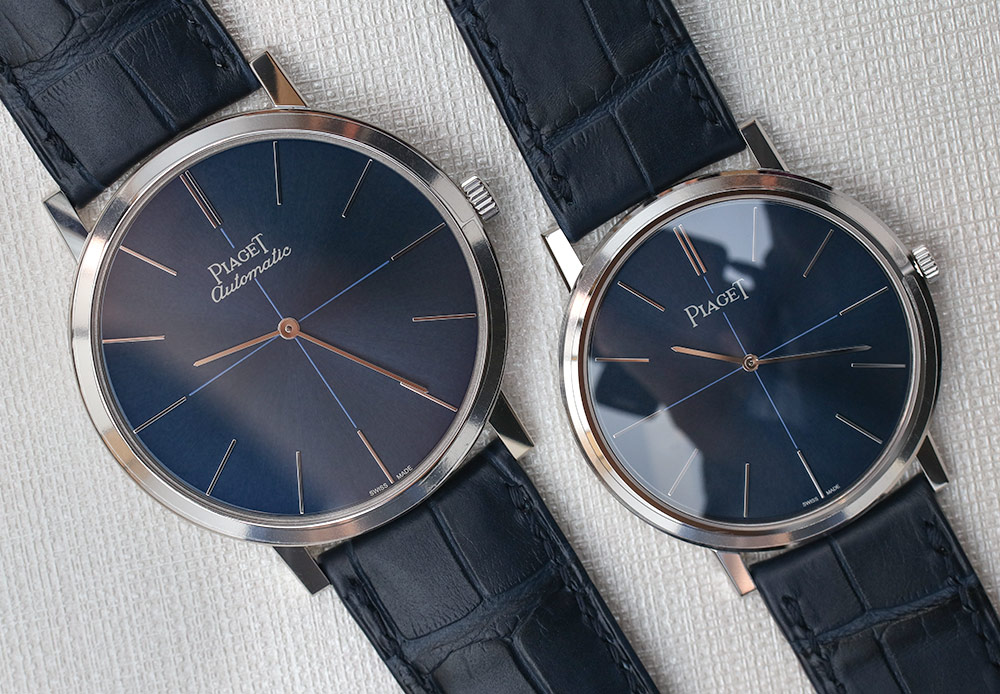 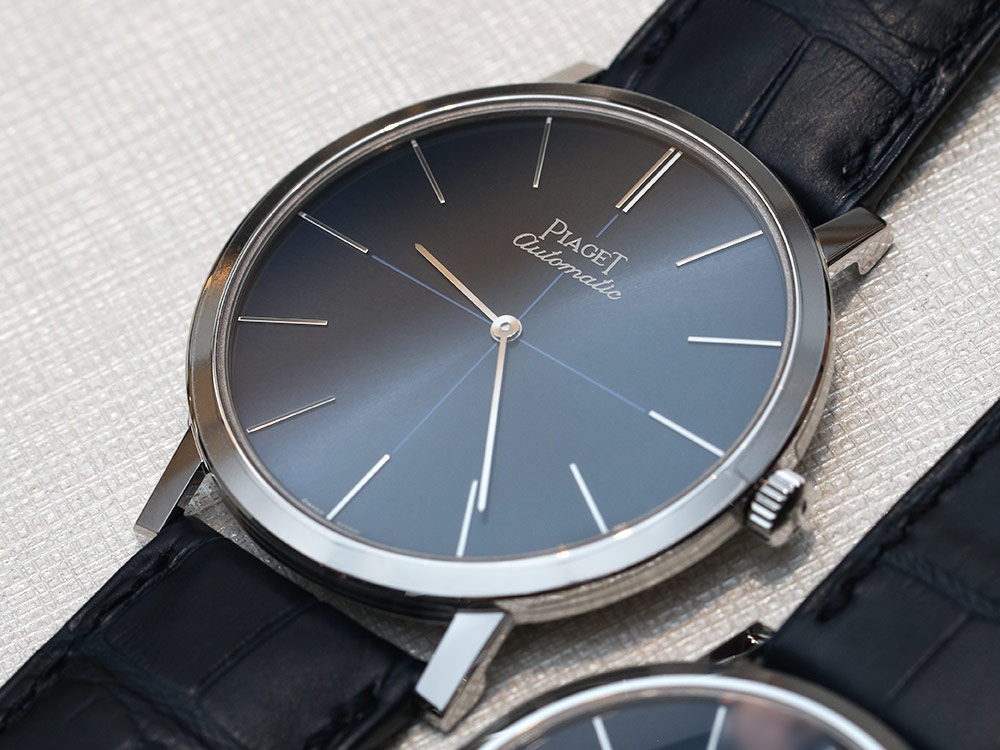 The widest watch in the anniversary collection is a 43mm version of the blue dial with light-blue cross-hairs. It is also automatic, with the Caliber 1200P (2.35mm thick), that was originally introduced in 2010 as a successor to the 12P. Unlike the 1203P in the 40mm model, it has no date window. It otherwise achieves the same 44 hour power reserve, though. It is decorated with bevelled bridges with circular Côtes de Genève stripes, a circular-grained mainplate, blued screws and an 18k gold, off-center micro-rotor engraved with the Piaget coat of arms. This model is in 18k white gold. 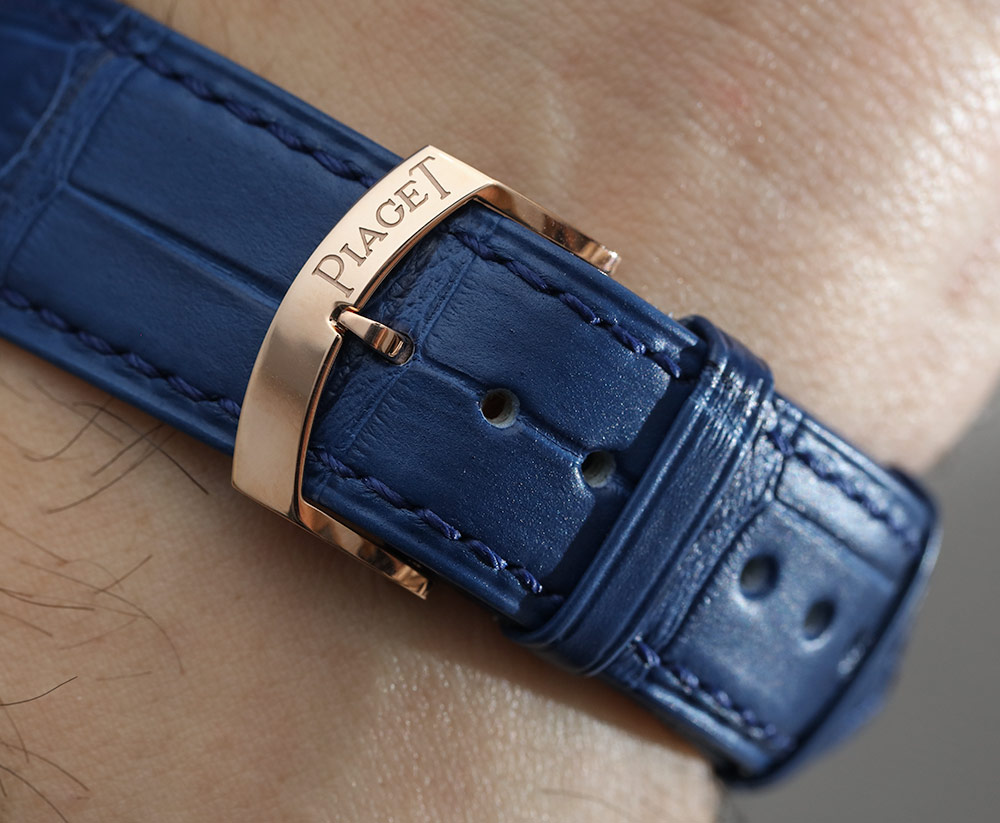 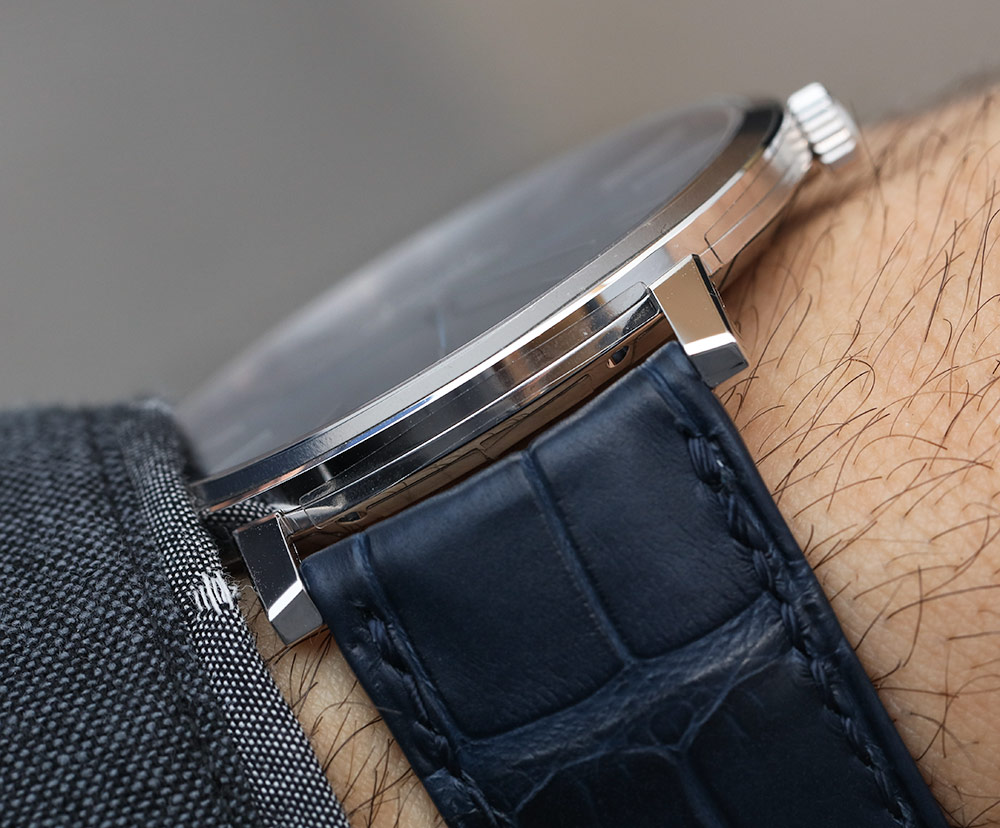 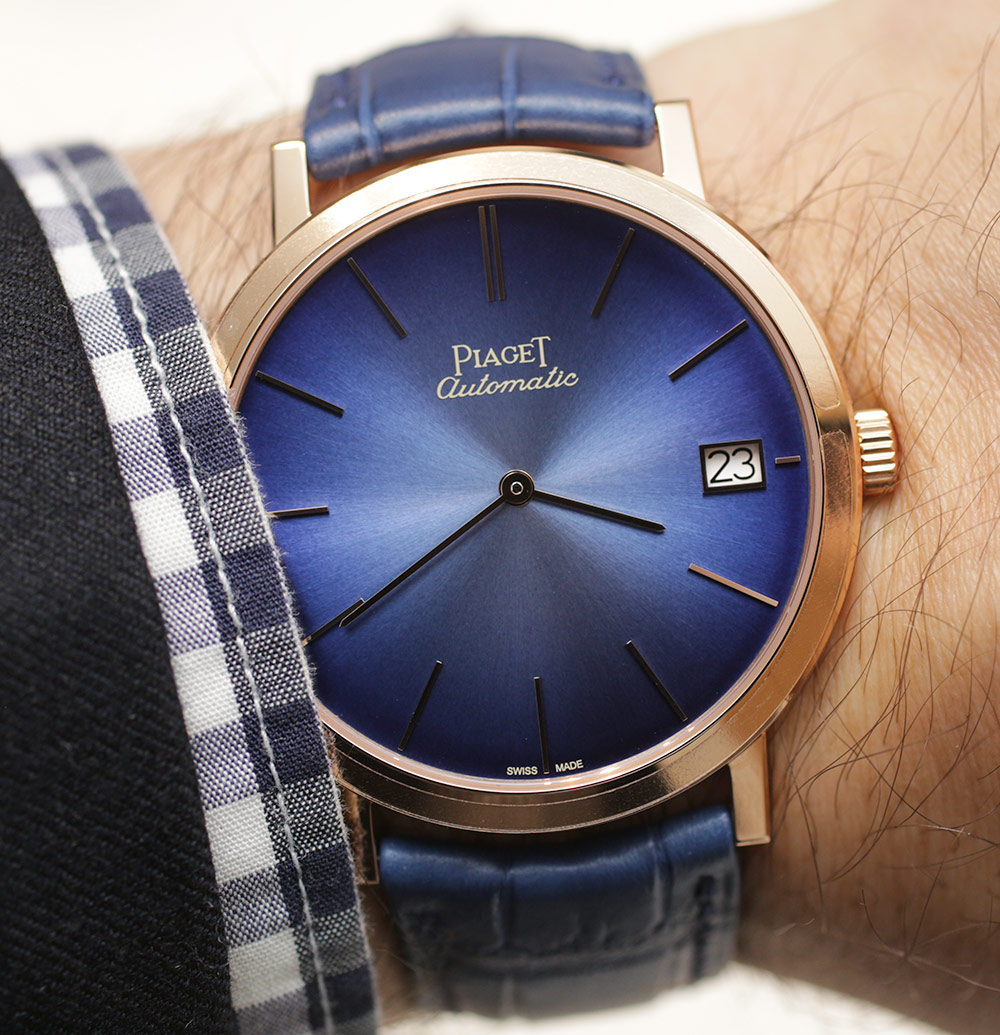