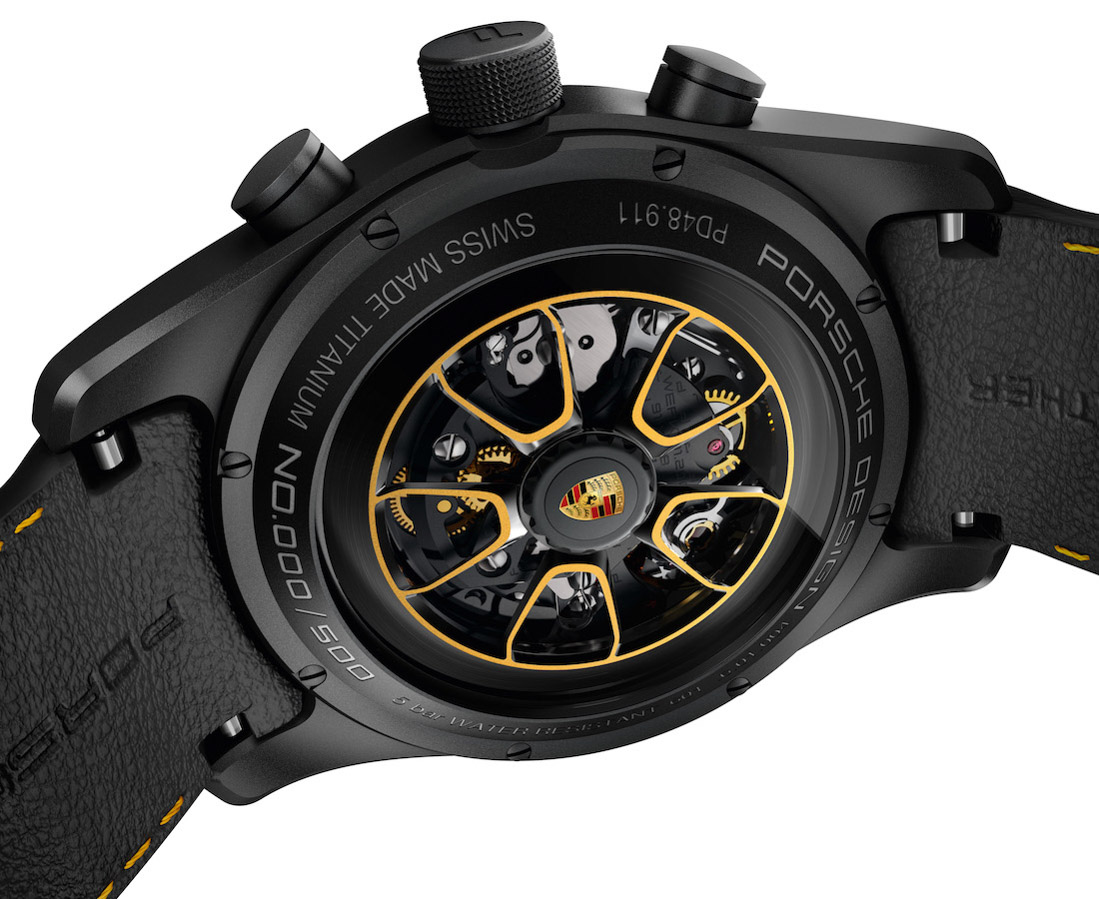 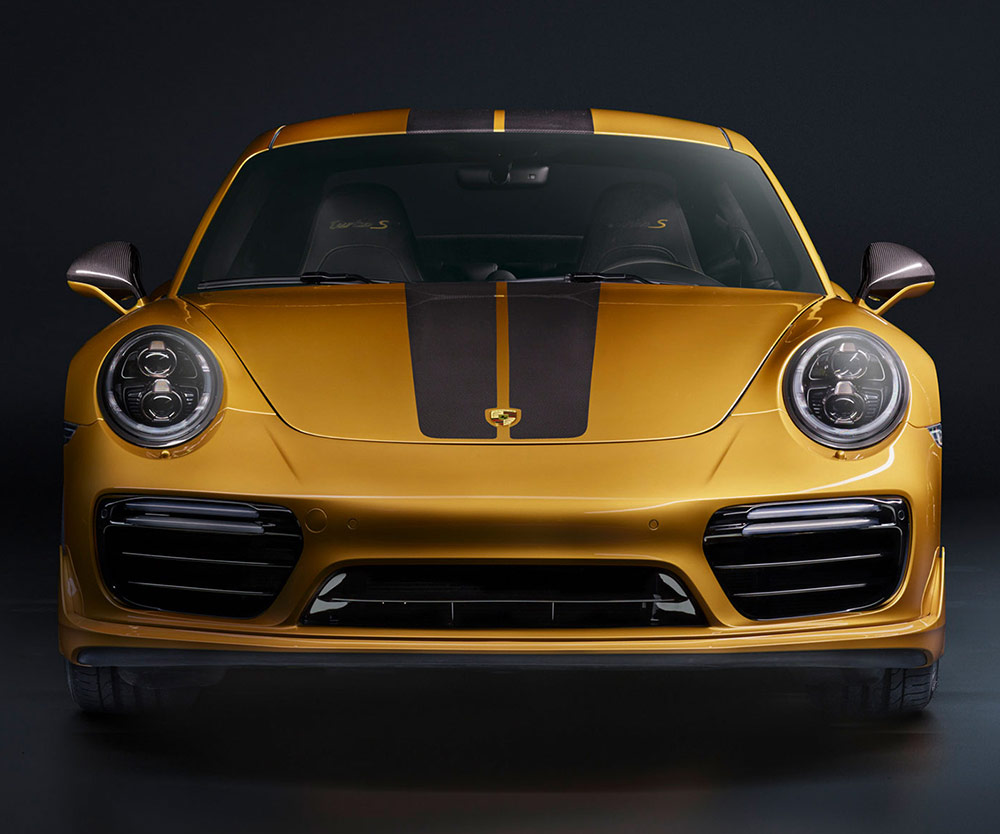 Brace yourselves because this is The First Time Ever that Porsche customers can have the optional matching chronograph from Porsche Design configured in the same specifications as their new 911! I mean, this really does make sense, I am just surprised it took this long. Enter the new Porsche 911 Turbo S Exclusive Series – said to be “the most powerful 911 Turbo S ever” – and the Porsche Design Chronograph 911 Turbo S Exclusive Series, a fittingly sporty racing-style chronograph in Porsche Design’s slick, modern style. Plus, there also are some leather accessories, all very limited and “exclusive.” 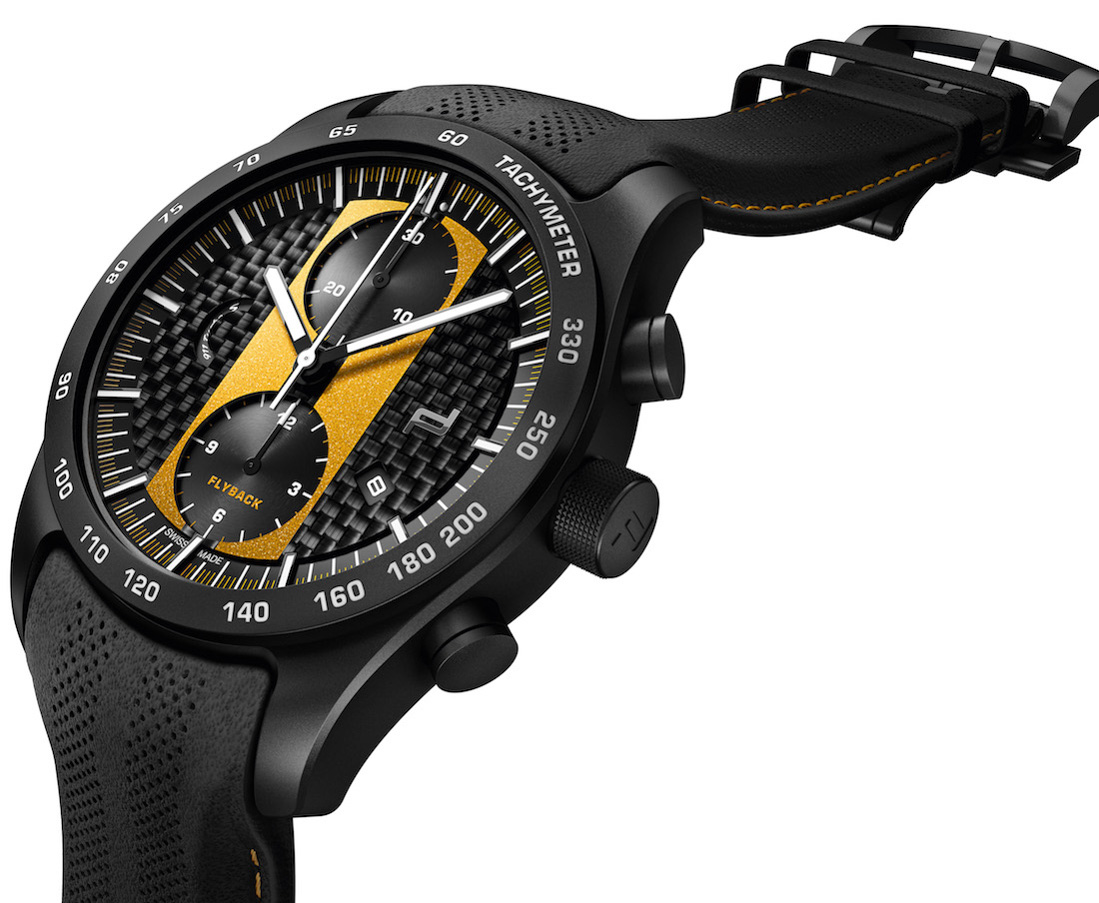 I mean, picture this for a moment: you’re sitting there, at the select Porsche dealership authorized to offer this Exclusive Series car, and you’re going through the infamously long list of eye-wateringly costly options you can drizzle on top of your future 911. Then, at the bottom of the page, you get to the one that goes something like: “Personalized Porsche Design Chronograph 911 Watch, manufactured as a limited edition of 500, according to individual order, and delivered simultaneously.” Could be a no-brainer when the watch is as much as a few extra options on the car. 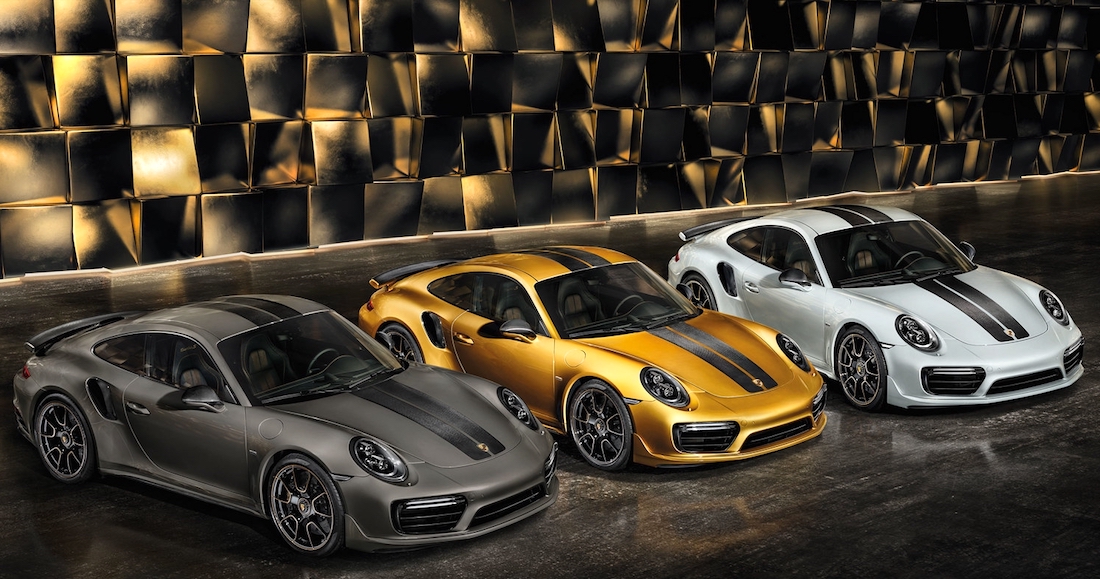 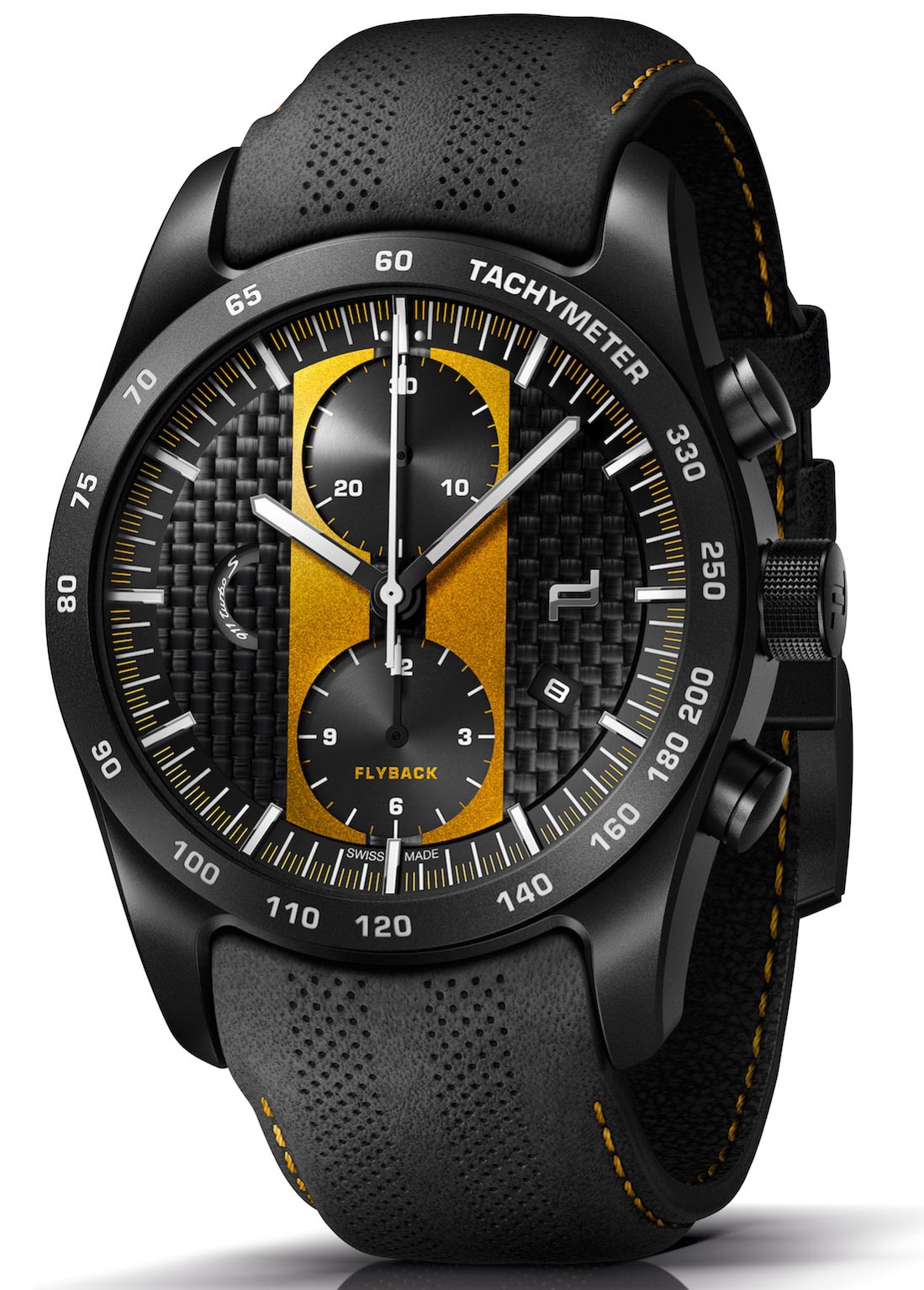 Porsche Design, in various statuses, has been around since 1972 but, as we’ll elaborate on in an upcoming watch review, hasn’t always been in tune with what the parent company had been up to. Why it took some 45 years for Porsche Design to make a limited edition watch that can go with a specific 911 I find it challenging to understand. But, now that it’s happening, it sure is a good sign that Porsche’s watch division is getting back on track; mind you, the watch brand Porsche Design is now on its own after periodical, literally decades-long collaborations with IWC and Eterna – and also Orfina, but for a shorter, early period. 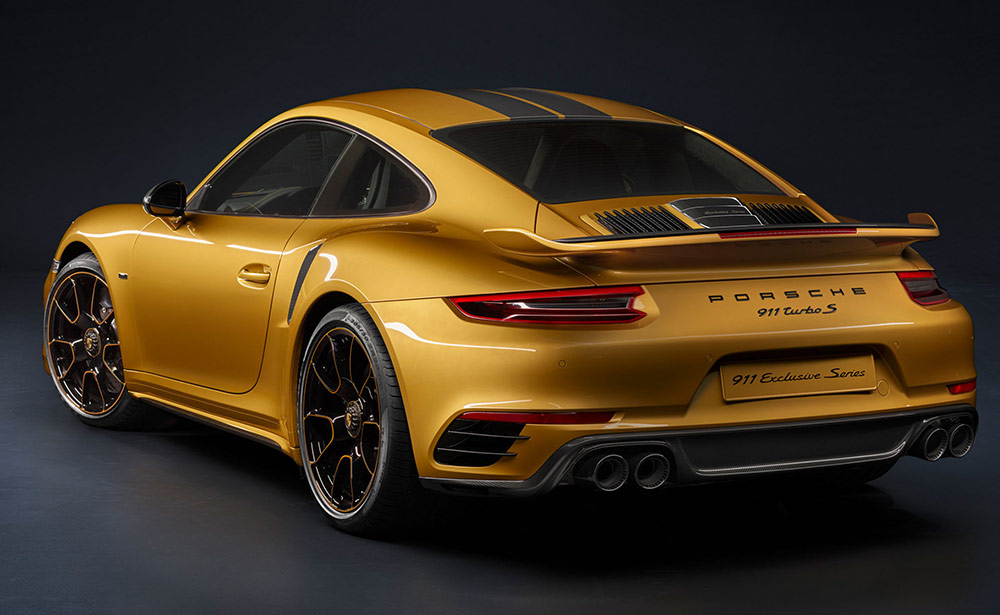 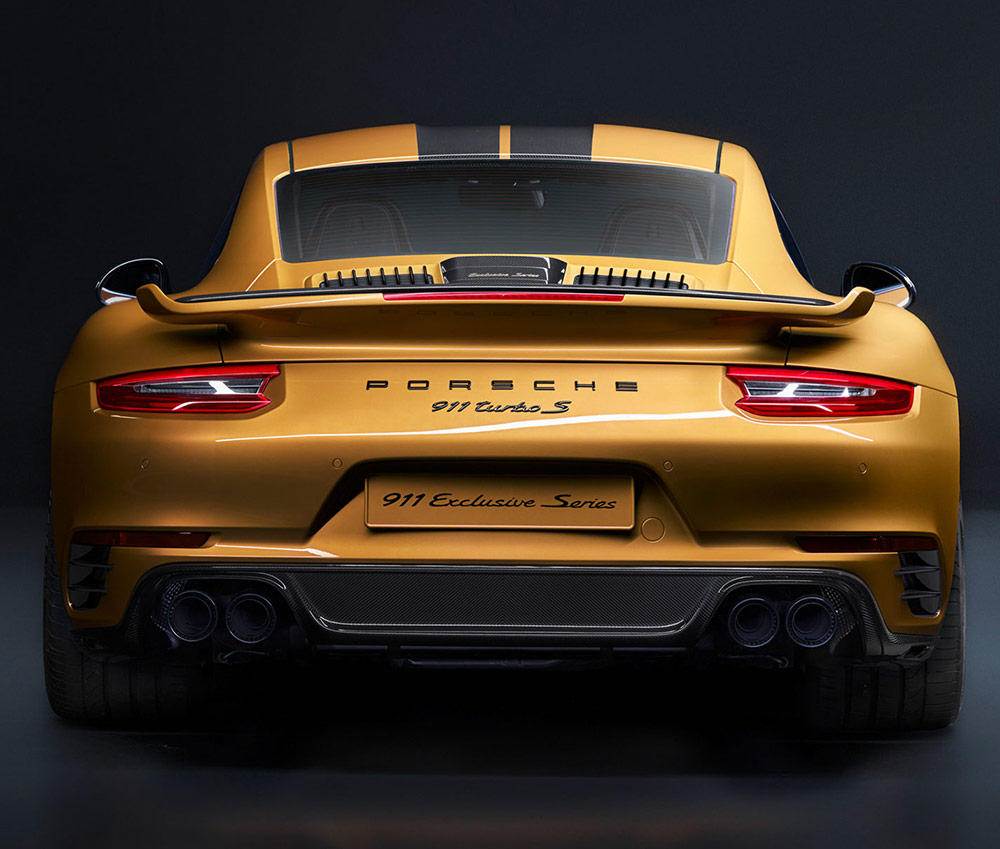 First, let’s wrap our heads around the car’s exclusiveness and then see how the watch measures up against what the vehicle promises to offer. Its design, materials, hand-finishing touches, and 27 extra horsepower are what distinguish this from other, more ordinary 911 Turbo S models. The new Porsche Exclusive Manufaktur at Porsche AG’s headquarters in Stuttgart-Zuffenhausen, Germany, is Porsche’s in-house workshop responsible for limited-edition vehicles – just imagine the pristine workshop in which this car is assembled. 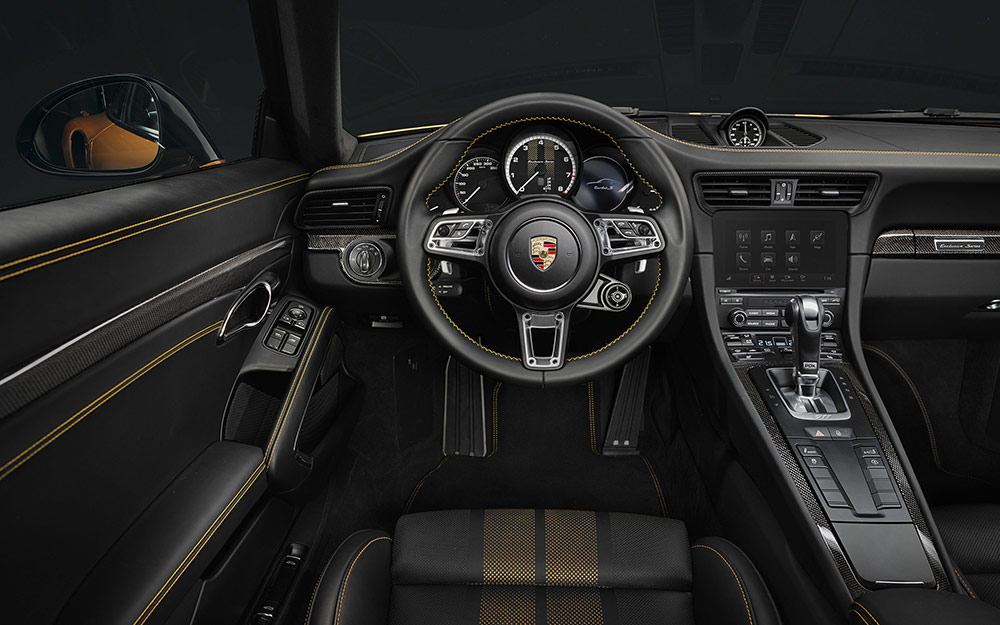 Here’s roughly what the 911 food-chain looks like: there’s the ordinary 911 Carrera, then the Carrera S, the GTS, the Turbo, and then there is the Turbo S. Now, 500 individuals with an unquenchable thirst for exclusivity can have the Turbo S Exclusive Series built by the Exclusive Manufaktur. There are also racing-bred iterations of the 911 like the GT3/GT3RS and GT2RS, but if you want proper door handles and not just re-purposed seat belts as pull-strings in the door, the Turbo S is the insanest version with all luxuries still in place.

Porsche say these Exclusive Series pieces are truly hand-crafted – though an ordinary 911’s interior is not exactly a robot-made cowshed either. Where all the exclusivity comes into the picture is the customization options and finishing touches, like how fine copper threads are integrated into the trim strips of carbon fiber, or the illuminated Exclusive Series lettering. 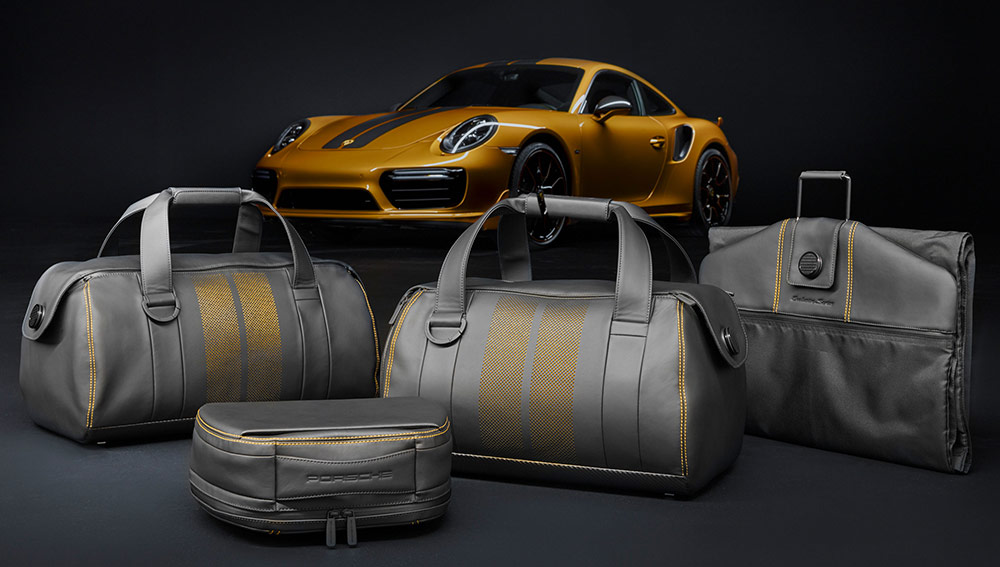 Just to give you the full picture, we’ll get the news of this tailor-made Porsche Design luggage set off our chest. While the world suffers no shortage of extremely gaudy gold accessories (one has to wonder why Saddam’s gold-plated AK-47 never really caught on) Porsche Design deserves some kudos for keeping things relatively restrained, as far as aesthetics go; pricing, well, not so much. This $6,324 (such a random number!) five-piece luggage set can be customized especially for customers who buy a vehicle from the limited production range and, as expected, perfectly fit the luggage space of this specific 911 – imagine the fun-factor if it didn’t! 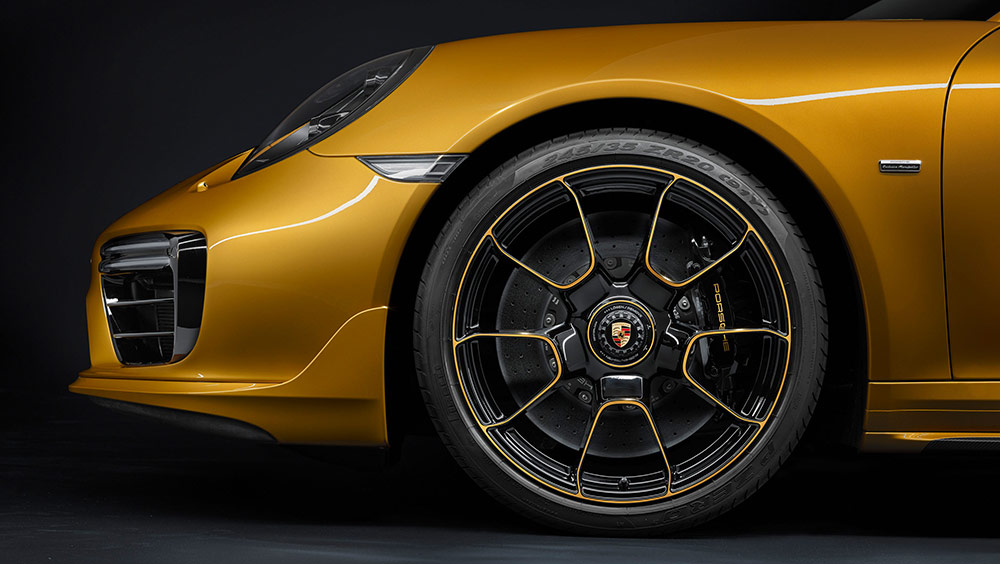 Some elements of the Porsche Design 911 Turbo S Exclusive Series watch can be customized to match the trim of your equally exclusive, personalized car – that includes the trim on the wheel-inspired automatic winding rotor, the color elements of the dial, strap choices, and the like. This news comes around the same time as Zenith’s new partnership with watch-customization-outlaw Bamford (details here). 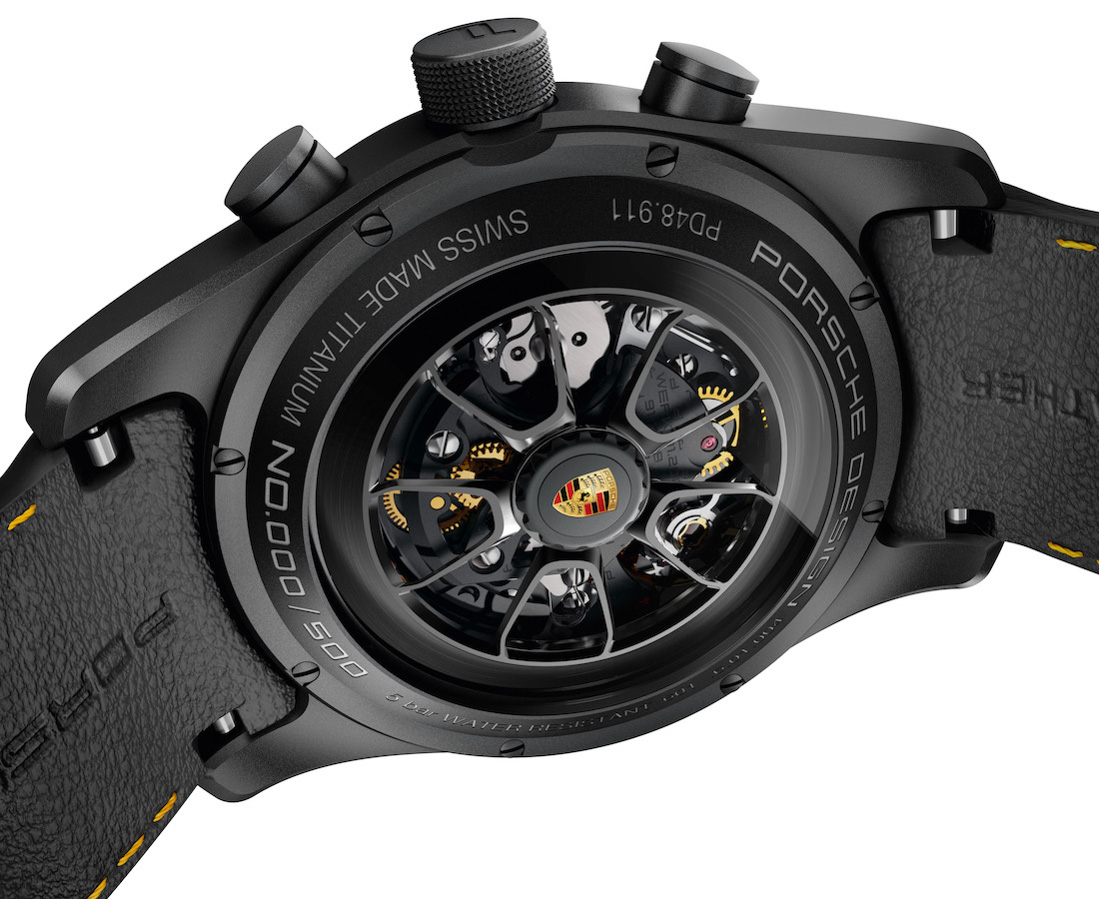 Add to this Porsche Design’s first in-house movement called the “Caliber Werk 01.200” (whatever happened with the first 199 iterations?), a new-ish chronograph with automatic and fly-back features that they say took three years to develop. I say new-ish because the base of the movement appears to be the 7750 – a movement that Porsche Design had previously depended on greatly. Given that the patent on the 7750 expired long ago, and since the company has engineered its watches around this trusty caliber, their building on 7750 foundations shouldn’t be much of a surprise.

From my previous, albeit brief encounters with Porsche Design (a review may be due), I could sense the brand wishing to have its own go at re-engineering some elements and functionalities – though, again, there is room to improve in how they communicate about it. 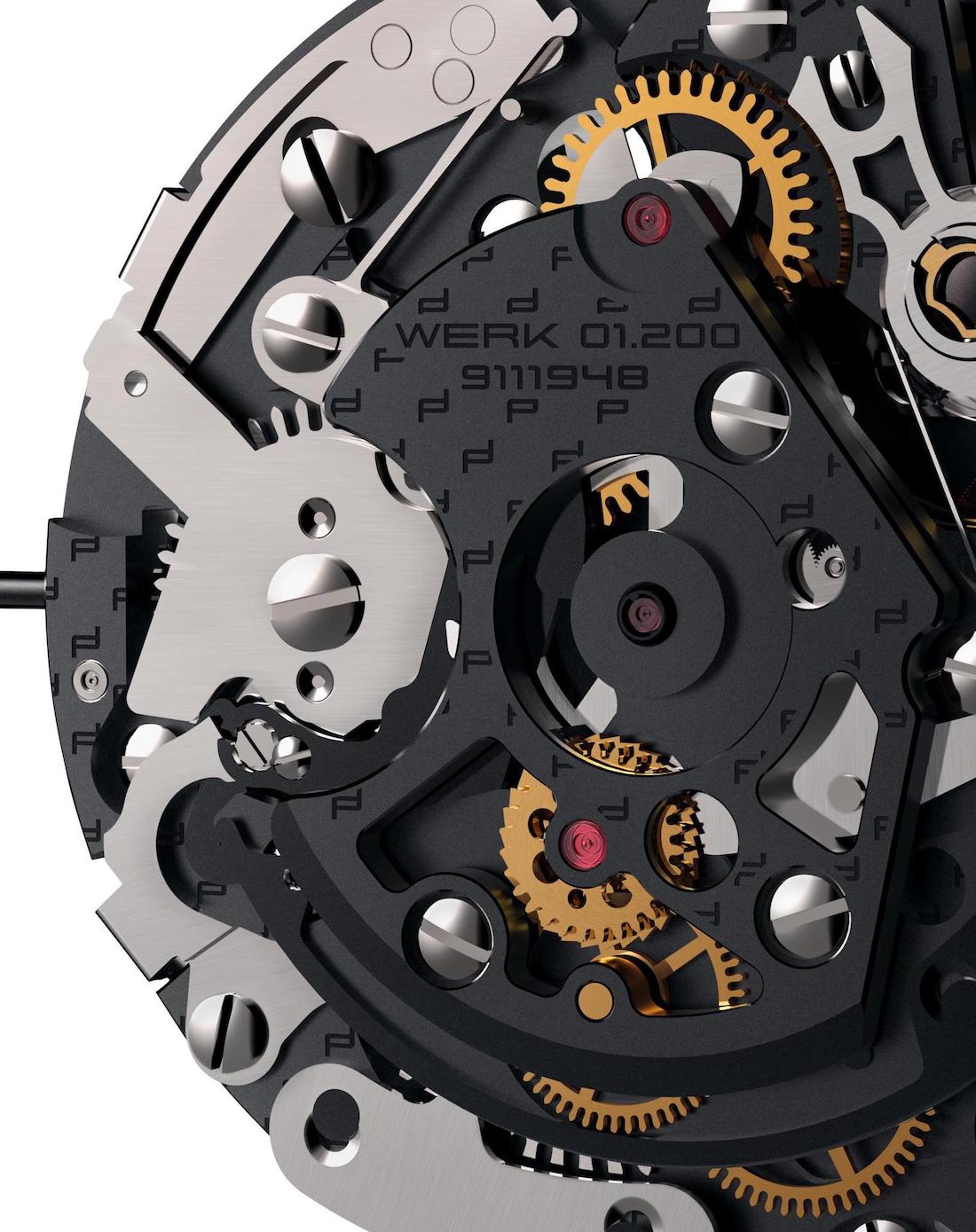 Specifically for the Porsche Design 01.200 caliber, they came up with the following: “As a result of the heat-treated coil spring, the movement delivers additional constant force transmission, among other features, to optimize the rate accuracy during increased load conditions over a longer period of time. Such increased load occurs, for instance, when time is stopped on the race track.” Stopping time on a race track, hmm. Looking forward to a Porsche Design minute repeater that allows me to repeat a minute that just passed by, but that I wish to re-live right after. 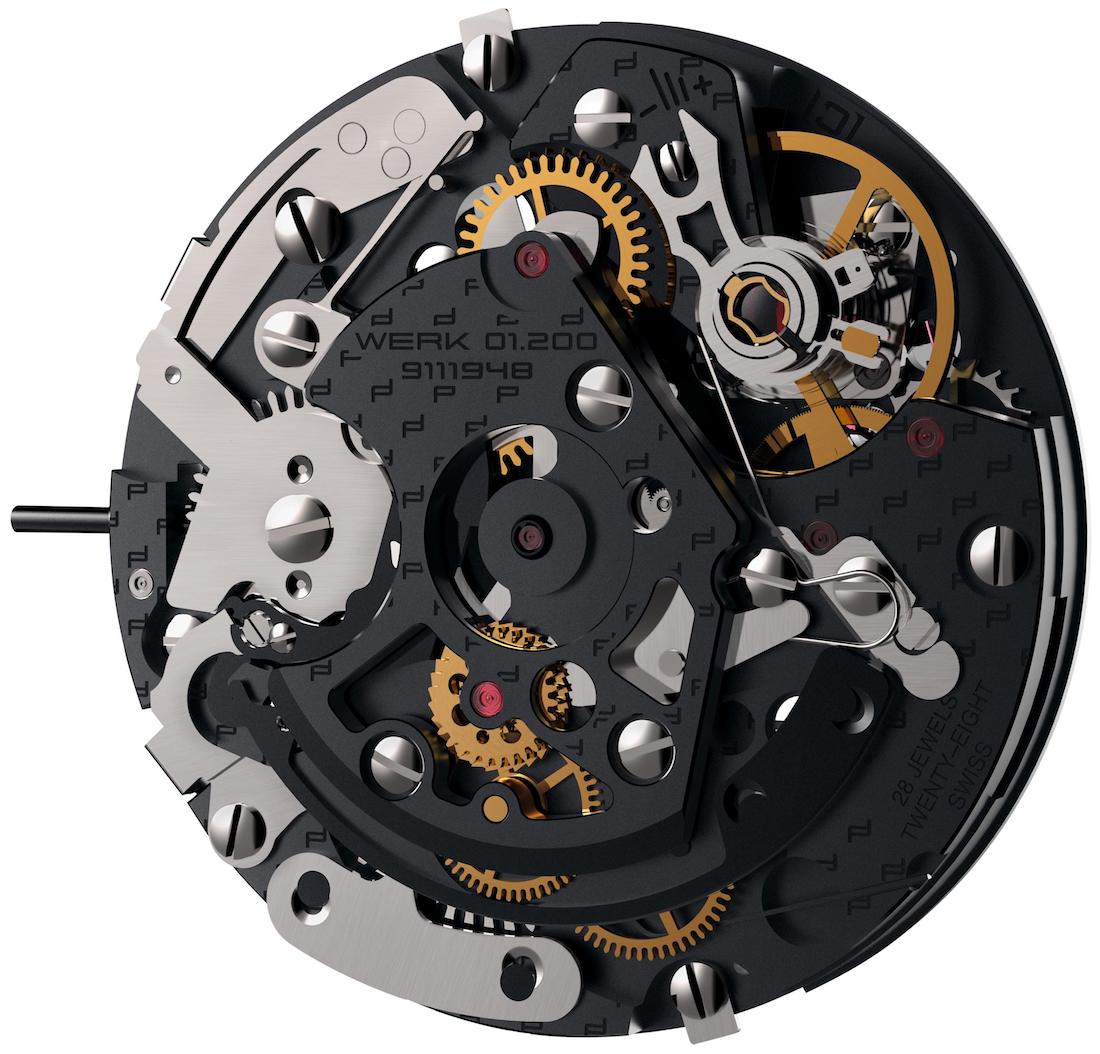 Also, Porsche’s Development Center for Motorsport helped out with the design of the barrel bridge: to implement Porsche’s lightweight design, the bridges have been optimized for load/stress – which is strange, since power reserve remained at 48 hours. Add to this the fact that the Porsche Design 01.200 caliber, running at a frequency of 4 Hertz (just like the 7750) is COSC-certified and what you are looking at from a more practical approach is a relatively accurate, nice-looking movement, built on a reliable base. 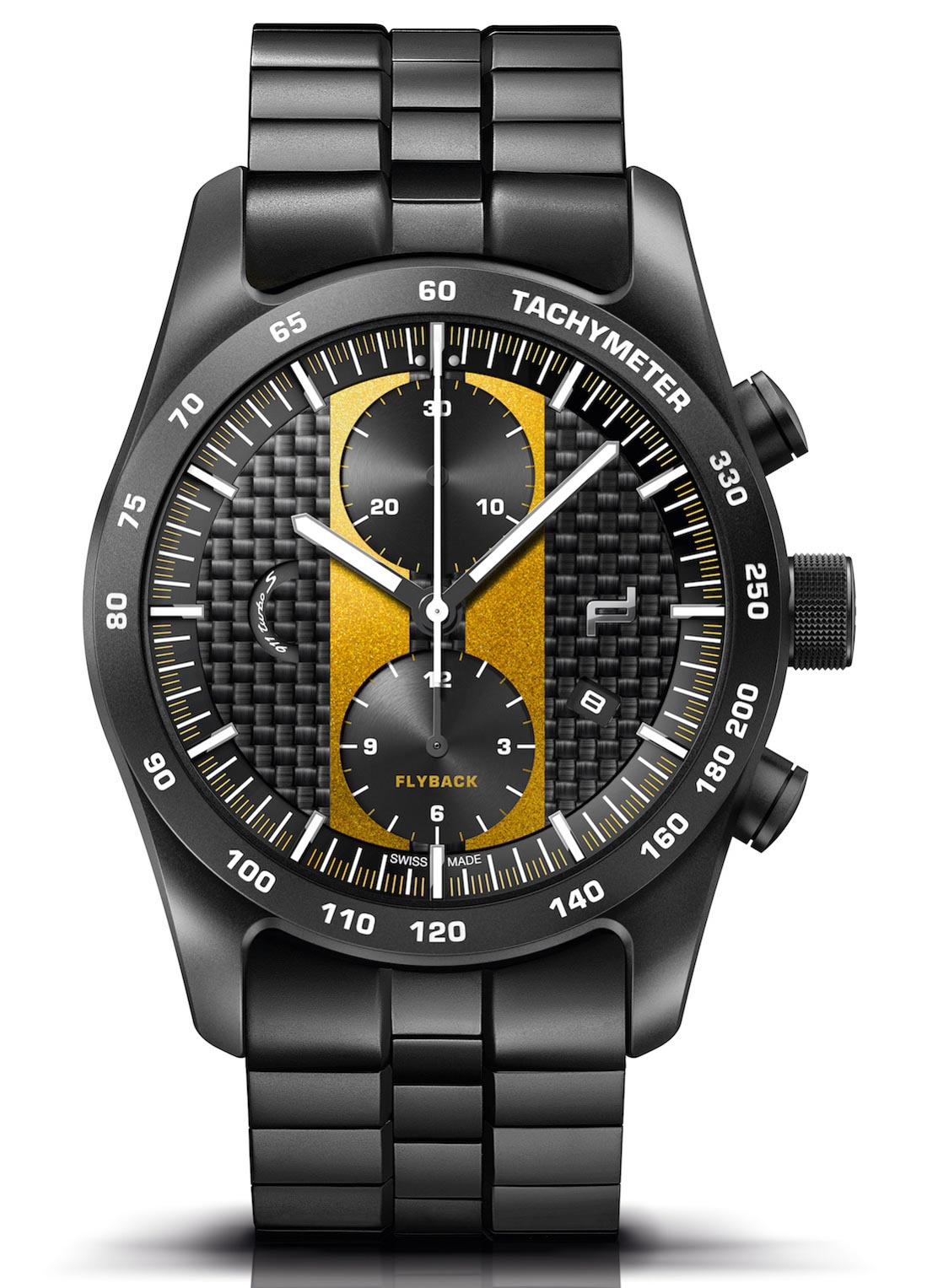 Wrapped in its 42mm-wide, 50-meter water resistant, black carbide-coated titanium case, with a carbon fiber dial, a leather strap and a titanium bracelet to boot, the Porsche Design Chronograph 911 Turbo S Exclusive Series watch will retail for around $12,650 – we presume that’s with the watch all made to match the spec of your car. By contrast, the suggested retail pricing for the Porsche 911 Turbo S Exclusive Series Coupe will start from $257,500. porsche-design.de