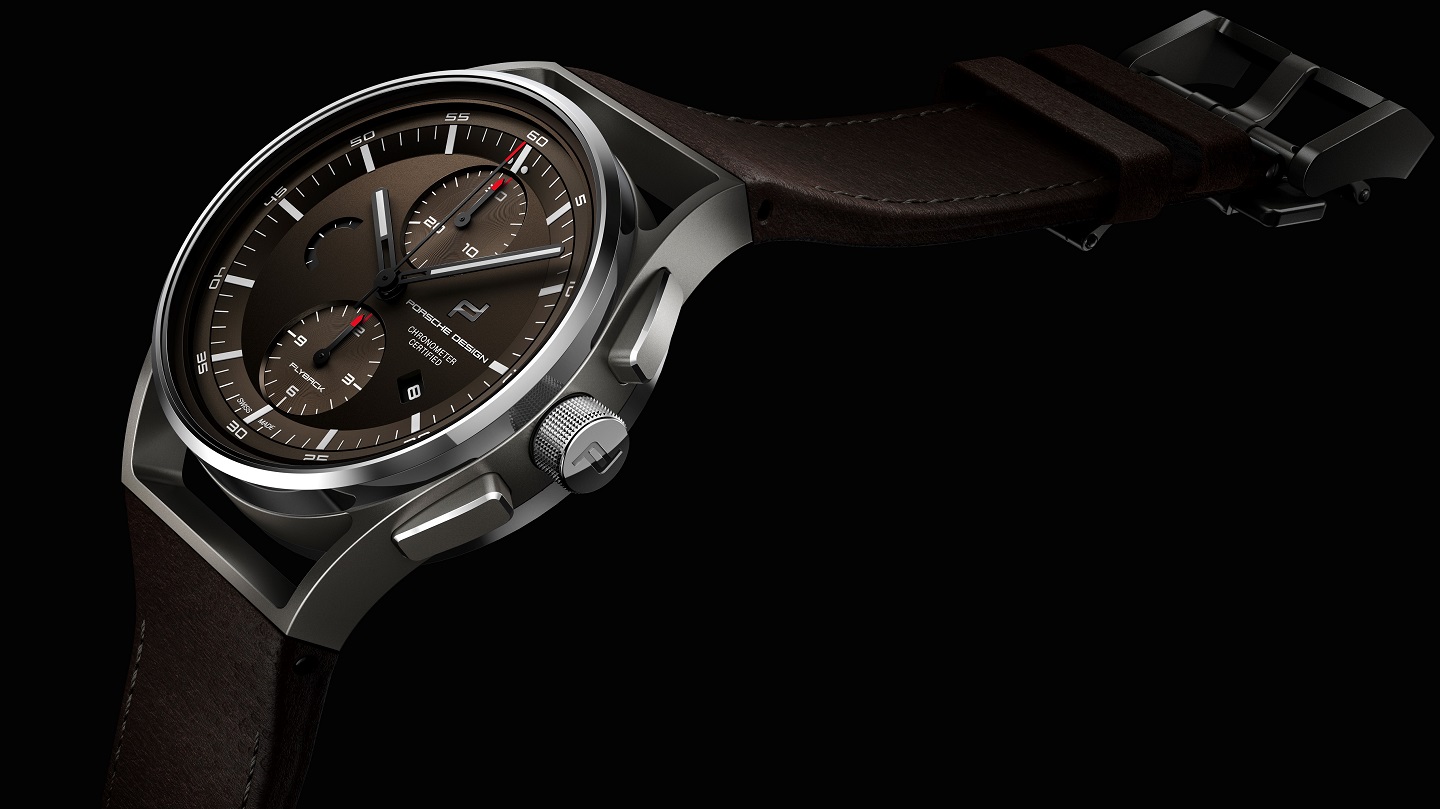 At 2017’s BaselWorld, Porsche Design unveiled something they were certainly proud of. With over three years of development time, Porsche Design released their first in-house movement, a flyback chronograph called the Porsche Design Werk 01.200. Porsche Design has mainly been known for presenting cutting edge chronograph technologies in their watches with some… unconventional design qualities that typically demand confidence and a hefty amount of wrist presence (Monobloc Actuator, anyone?). This release of the Porsche Design Chronotimer Flyback Brown & Leather is a breath of fresh air that presents a fair value proposition for a reserved chronograph (for Porsche anyway) utilizing the Werk 01.200. 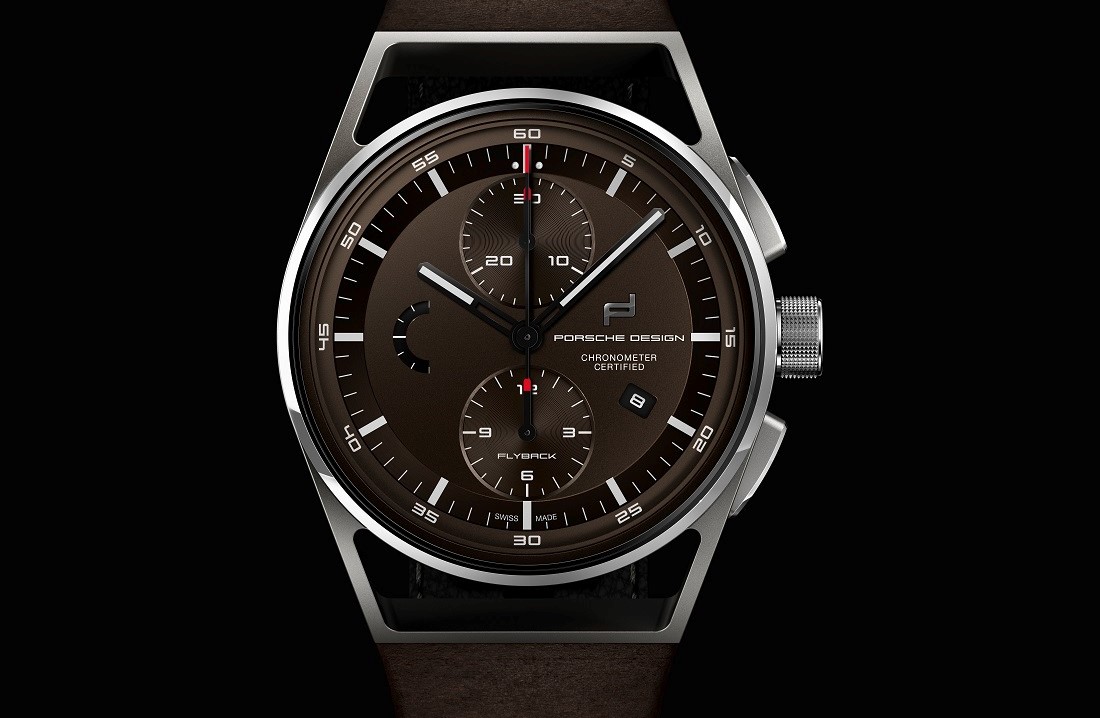 Porsche opted for a titanium case, as they typically do for “lightweight performance,” and like usual, paired with the hollowed lugs this watch is sure to be light. The case measures in at 42mm x 14.9mm making it in line with the rest of the models in its collection. The chocolate brown dial makes this watch feel more in line with a sporty dress watch than a straight-up sport chronograph. In fact, I think this is the most attractive model in the whole collection and presents a certain conservative nature that I don’t typically see from Porsche Design. And if a brown dial isn’t enough, the integrated brown leather strap adds another layer of uniformity to the color and dressy nature of the watch. 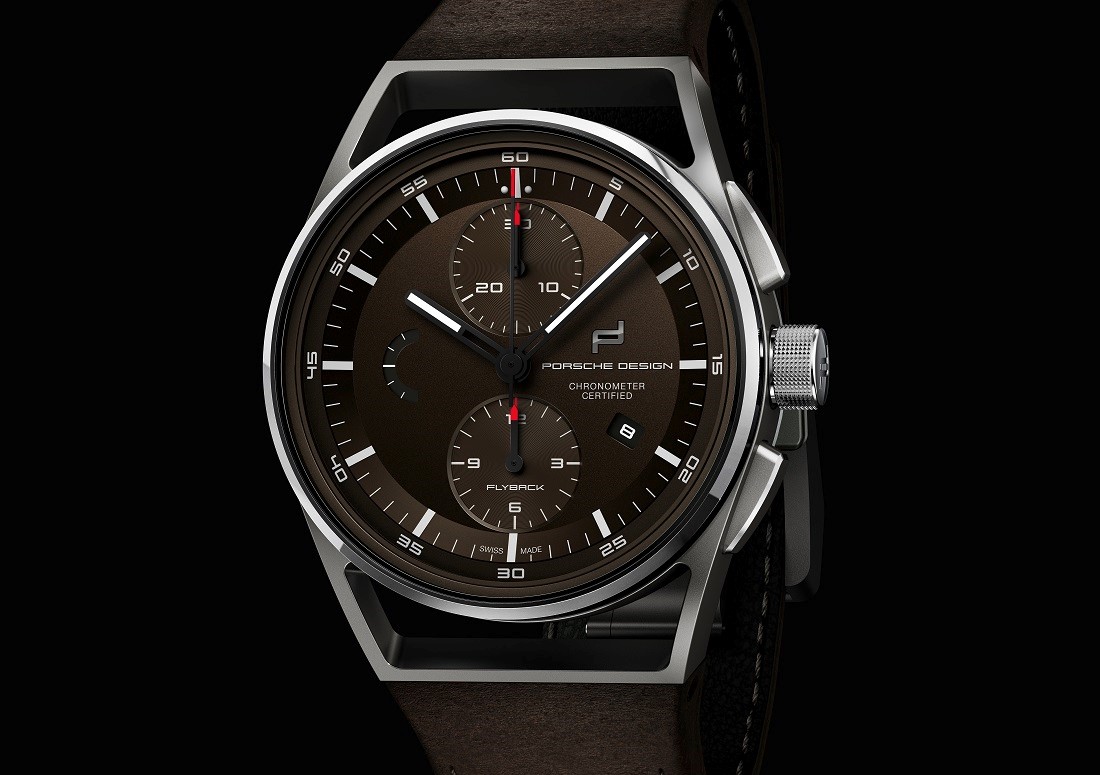 The oversized dial foregoes a tachymeter scale in lieu of a sixty second chapter ring around the outer rim of the dial for “maximum legibility,” though I feel it’s an interesting choice for a watch designed by a company known for their cars. The absence of a tachymeter also sets it apart from the rest of the Chronotimer 1919 collection, as it joins a small cluster of Porsche Design watches that don’t have them. Another feature I find cool is the recessed hour “ring.” The dark contrast with the black handset and red tipped seconds hand keep enough sporty details without detracting from being able to wear this watch with a suit. In addition to the logo and “Chronometer Certified” at 3 o’ clock, a date window sits at 4 o’clock, which I feel clutters the right side of the dial up a little bit, but doesn’t necessarily detract from the overall contemporary look of the watch. 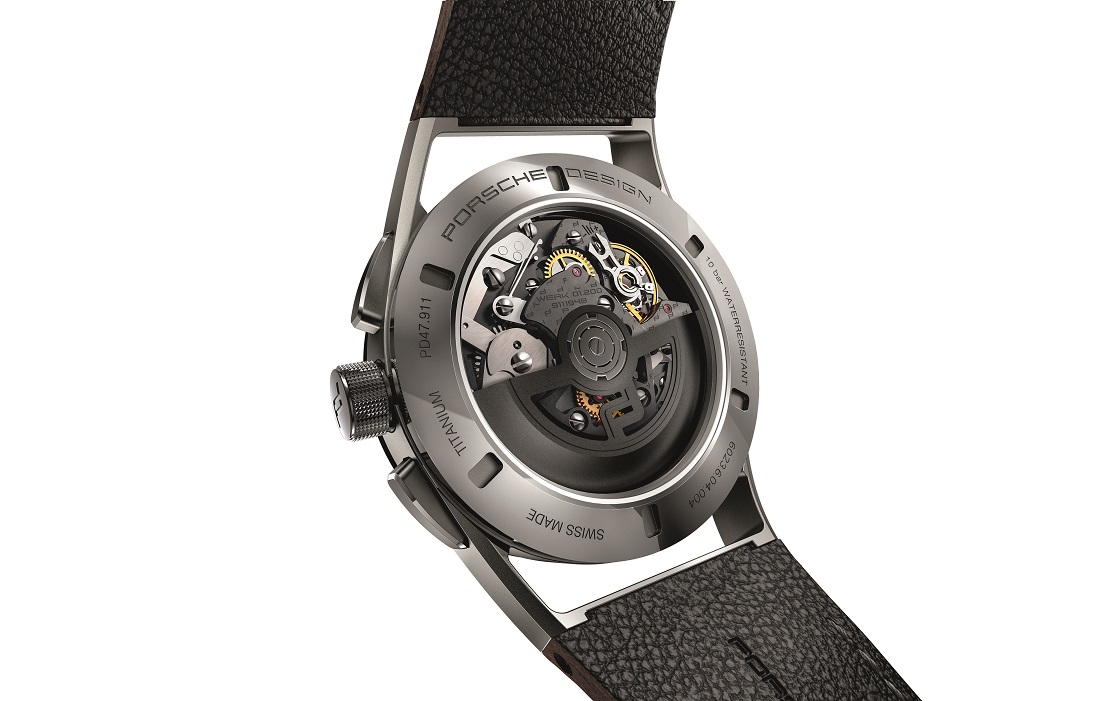 To Porsche, the flyback chronograph movement is the star of the show here. Porsche boasts about the COSC-certified Werk 01.200 movement with the quote “If we wanted something, we had to invent it ourselves,” which is a bit confusing since the technology in the movement may be optimized, but hardly new. A flyback chronograph allows for the chronograph to be reset and re-initiated with a single pusher – meaning that you don’t have to stop, reset, and then start the chronograph again – useful for timing laps on the track. The sapphire caseback allows for visibility of the 4Hz movement, and the open-worked barrel allows for a cool peek at the gear train and flyback function. The entire caliber is black PVD-coated with the rotor being made out of Tungsten steel – something Porsche claims “Guarantees a powerful wind.” While none of the material I received mentioned a power reserve, it’s assumed that it will be the same as the other watches in the 1919 Chronotimer collection at 48 hours. Additionally, the watch is water-resistant up to 100m.

I can’t deny that I like this watch – surprisingly more than I would like to admit. I feel Porsche Design has done a fine job of designing a contemporary watch that still maintains a bit of the sporty nature that is associated with the brand. The value proposition isn’t terrible either, with the price for the Porsche Design 1919 Chronotimer Flyback Brown & Leather coming in at $7,450 USD. porsche-design.us