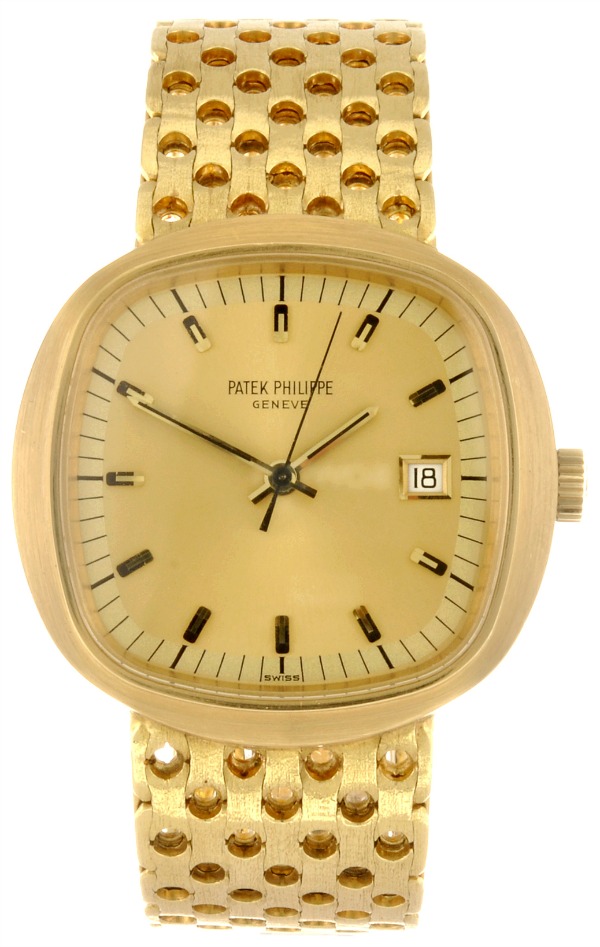 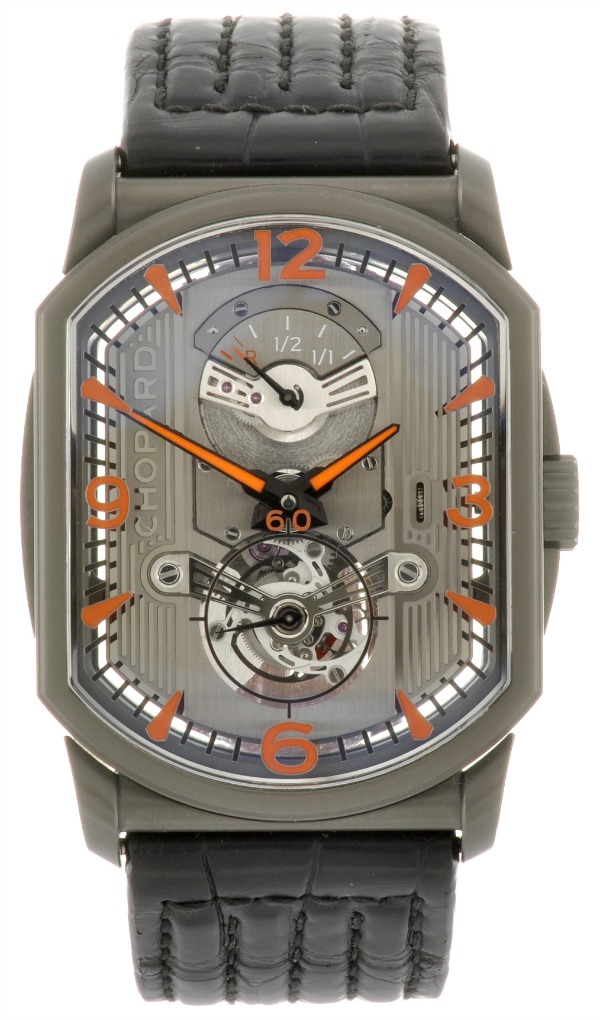 The catalogue for Fellows’ 15th April Vintage & Modern Wrist Watches Auction is now available to view online, presenting the usual eclectic mix of watches with something for every budget. That said; collectors looking for something special not will be disappointed. Below we highlight one contemporary watch for men, one for ladies and a vintage gem.

The association of watch brands with motorsport can have a numbers of driving factors (if you pardon the pun). This may be a historical connection where drivers have used the company’s product as tools of the trade or it may me a more blatant attempt to push brand profile, with any connection having its origin in the marketing department’s imagination rather than in the pit lane or on a driver’s wrist. With Chopard, you have to include personal passion as a major reason for the link.

Co-President of Chopard, Karl-Friedrich Scheufele’s likens the appreciation of classic automobiles with that of fine mechanical watches. Both are relics of a bygone age, superseded by modern technology but remain as a testament to the durability of craftsmanship.

When designing a watch to celebrate the brand’s 150th anniversary, it is no surprise that the motoring theme was followed. Many brands have used cues from dials, dashboards or exterior trim to inspire their designs. Chopard were more literal. If the movement is the ‘engine’ of the watch then why not make it look like one – and so the 150 piece, limited edition ‘Engine One Tourbillon’ was born.

The lack of a dial moves the hour markers up onto the inner surface of the glass, giving an unimpeded view of the movement. The top plate is sculpted to mimic the contours of an engine block with the brand’s name stamped where the car maker’s would be. The power reserve is a fuel gauge, while the tourbillon provides the dynamism that brings the engine to life. Unusually for a tourbillon, this particular engine is COSC chronometer certified.

Just as with a vehicle engine, the movement is mounted into the case with shock-absorbing rubber blocks. The case lugs that hug the watch close to the wrist take the form of car wings and the unique strap design copies the leather stitching found in the seats of the classic machines that Karl-Friedrich so loves to drive.

This striking expression of ‘auto-horology’ is offered as lot number 56. 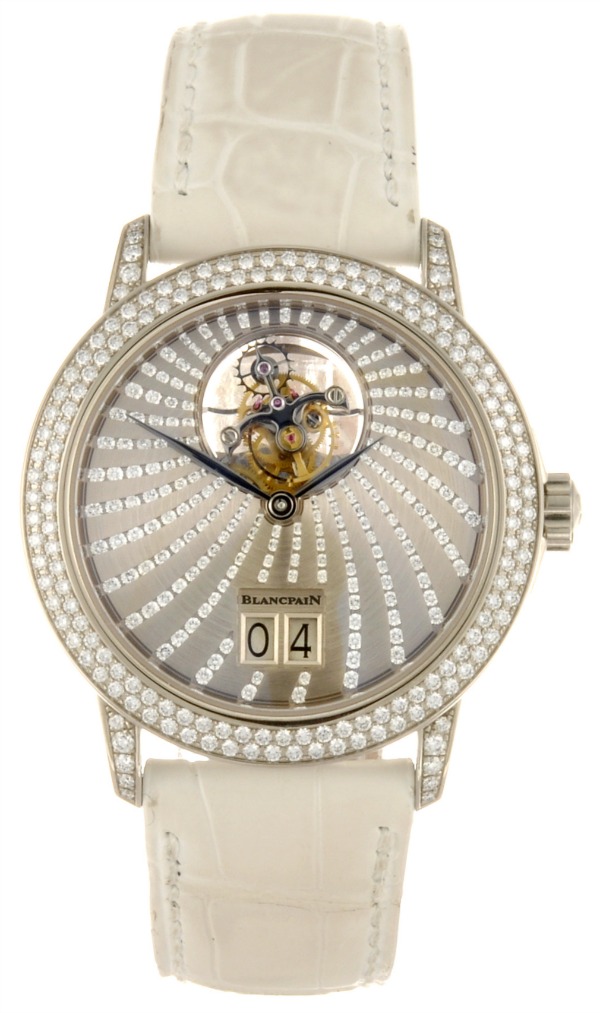 The Blancpain Léman Automatic Tourbillon Large Date – Lot number 7 is a watch for ladies who value jeweller’s art alongside that of the master watchmaker. This movement was the first flying tourbillon produced by Blancpain and the first to have a power reserve of eight days. Designed in collaboration with Vincent Calabrese – the originator of Corum’s ‘Golden Bridge’ and founder member of the AHCI – his delicate touch is clear to see.

The automatic winding and large date mean that this watch, while beautiful to look at, is no safe-queen. It is remarkably easy to read and to wear. The full size case allows a jewellery watch to house the kind of movement normally considered the preserve of ‘gentlemen’s’ pieces. The dial utilises a unique diamond setting style to present 194 stones with a further 164 to the case and bezel.

Too often ladies are presented with quartz models or diminutive case sizes on the understanding that they are not interested in movements and complications. This is a watch that bucks the trend presenting a serious collector’s piece with a feminine touch.

The Patek Philippe Jumbo Beta 21 is an example of the first quartz watch ever produced by the brand as part of their collaboration with the CEH project. Following on from the presentation of the world’s first quartz watch – the prototype Beta 1 in 1967, work began on producing a watch for sale.

The original Beta 1 ticked in the way that we expect modern quartz watches to, with one movement of the hand per second. Turning this into a viable watch to sell proved problematic. The 14 stage frequency reduction process necessary to drive the stepping motor was too power hungry and the battery life was less than a year.

Those in charge of the project deemed this battery life to be unacceptable and a dramatic change of approach was needed. The second prototype – which eventually evolved into the Beta 21 production model, had only 5 frequency reduction steps. This gave the necessary power saving but produced a very different end result. Instead of the previous 0.5Hz, the end frequency was 256Hz. This was used to drive a vibration motor resulting in a smooth sweep of the second hand such as that produced by the Bulova Accutron – not the dramatic difference that the project had hoped for.

To make matters worse, in 1969 Seiko beat the Swiss to the punch, launching the Astron SQ35 to the Japanese public. This was a watch that ticked – like the Beta 1, but had a battery life of over a year.

In 1970 the Beta 21 was launched across all the brands that contributed to the project. Only 6000 units were produced before the vibration motor model was discontinued. Further research reverted back to the previous design technology of stepping motors and ticking second hands, but using new semi-conductors that reduced the power demands enormously. By this time the Swiss had lost the research initiative that was promised by Beta 1 and were reduced to playing catch-up.

The Beta 21 stands as a testament to the desperate technological race that marked the transition from electronic watches to modern quartz. It shows great innovation, unbelievable cooperation but, ultimately, the wrong direction.

Patek Philippe’s version of this watch is an exercise in bold early 70s styling. It is large and streamlined with an intricately produced bracelet – a rare example of such a venerable mechanical brand’s first steps in quartz. This watch is offered as lot number 173.

Click on the link below to view the entire catalogue. While you are there, why not sign up to receive email alerts whenever a new auction catalogue goes live?