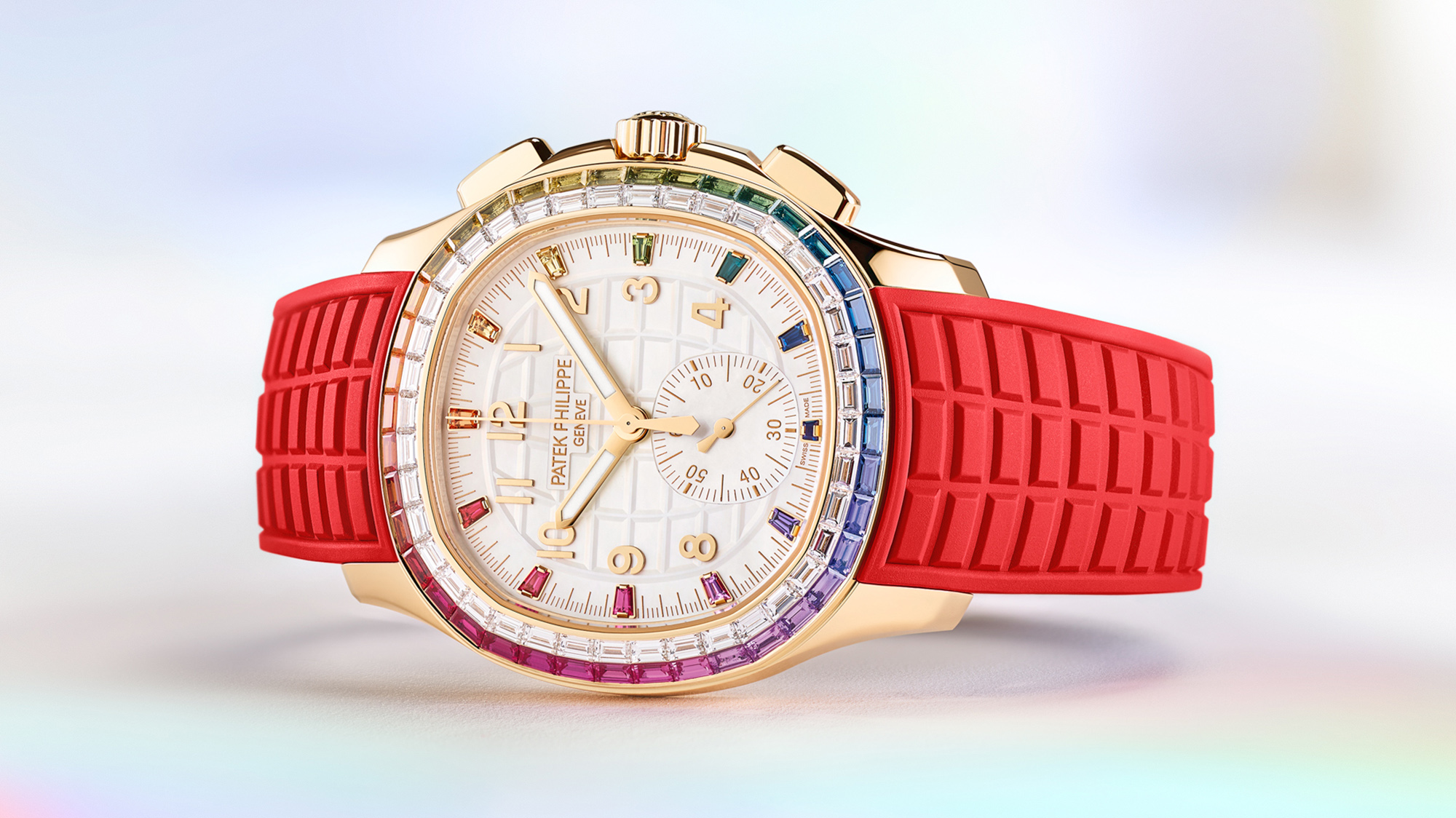 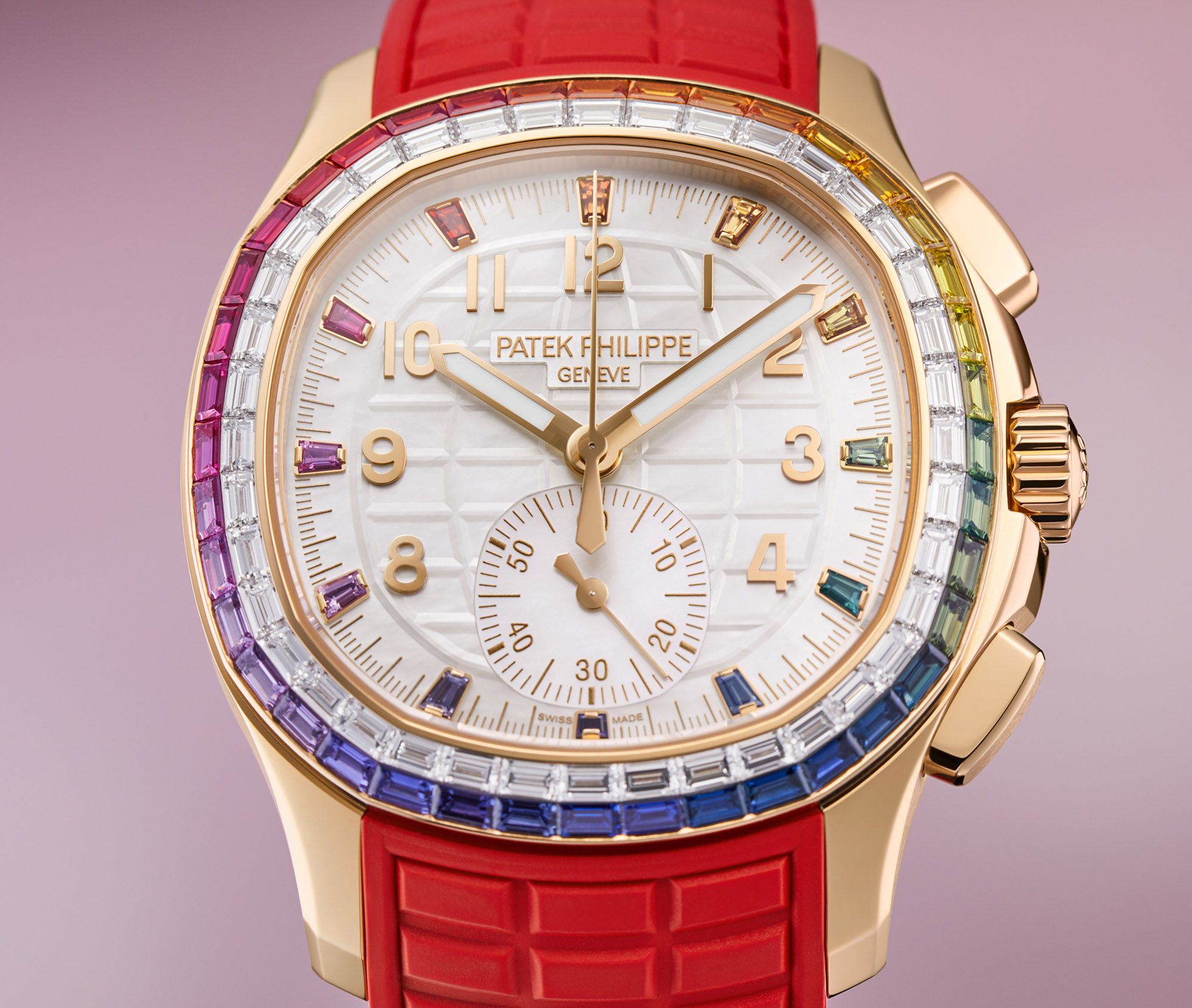 Although the release of a new generation of Nautilus models certainly stands as the biggest of Patek Philippe’s recent announcements, the venerable Swiss brand’s slate of announcements this week also included a broad selection of updates for other product lines, as well. Surprisingly, what may potentially be the most striking release of the group is ostensibly a women’s watch, delivering the first-ever Patek Philippe automatic chronograph aimed at women. The new Patek Philippe Aquanaut Luce “Rainbow” Chronograph should deliver broad crossover appeal, however, with a wild rainbow gem-set execution and midsize proportions that should make it a standout on a variety of wrists. 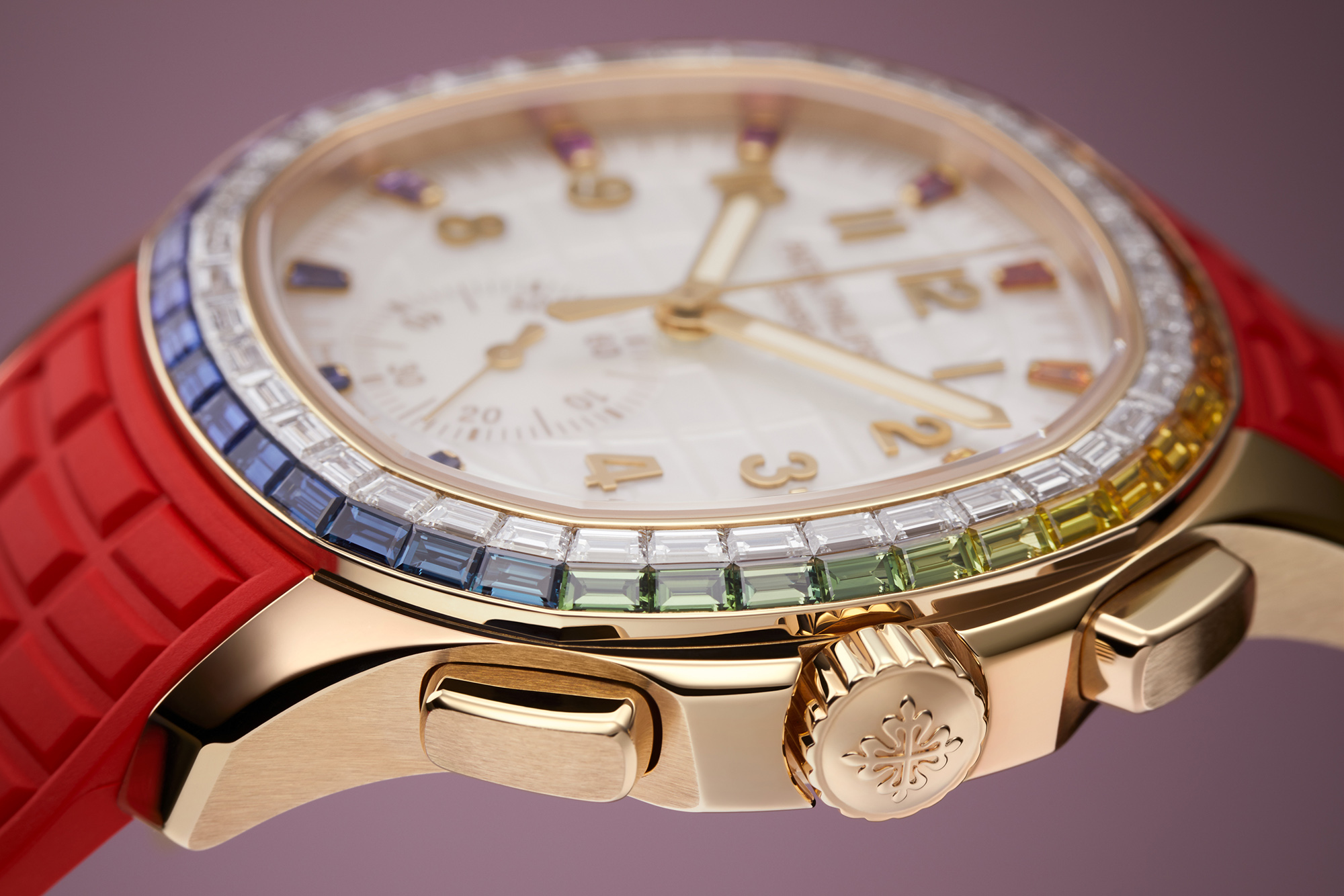 At 39.9mm-wide, the 18k rose gold case of the Patek Philippe Aquanaut Luce “Rainbow” Chronograph should offer attractively wearable proportions for both men and women, particularly when paired with the Aquanaut line’s squarish case geometry. Those familiar with the Aquanaut line should be right at home with the overall form here, echoing the tapering lugs, rectangular pushers, and low, wide crown guards of the larger Aquanaut chronograph offerings. For the line’s signature bezel, however, Patek Philippe delivers a bold and intricate take on the increasingly popular rainbow gem-set bezel motif. Rainbow settings have largely taken the place of all-diamond “icing out” treatments in recent years, but the Aquanaut Luce “Rainbow” Chronograph’s twin rows of baguette stones offer wearers a taste of both experiences. The outer row of stones is made up of 40 colored sapphires, arranged to create a continuous spectrum around the dial. For the inner row, Patek Philippe instead 40 baguette-cut diamonds, both adding a brilliant highlight ring to the design and working to make the dial feel wider in images. Patek Philippe completes the case with a sapphire display caseback, and rates the watch for a subpar 30 meters of water resistance. 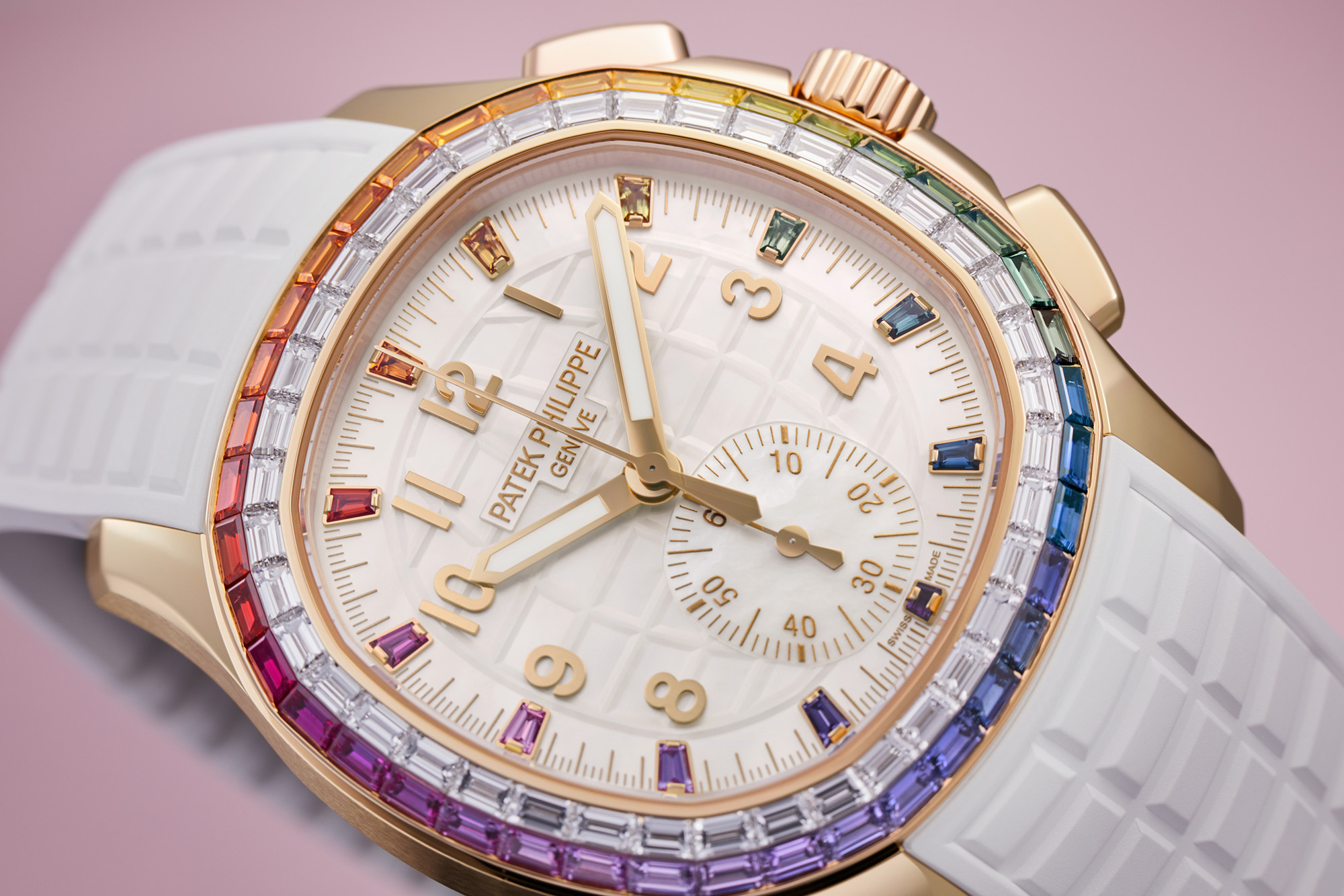 The Patek Philippe Aquanaut Luce “Rainbow” Chronograph’s rainbow gem-setting treatment extends to the dial, with 12 sapphires in various colors flanking the applied 18k gold Arabic numerals. The Aquanaut line’s broad engraved grid-style dial texture is present and accounted for here, rendered here on a base layer of milky white mother of pearl in images. Like previous Aquanaut chronograph models, Patek Philippe opts for a single 60-minute register at 6 o’clock here, prioritizing a clean overall layout over the utility of a running seconds or a chronograph hours subdial. 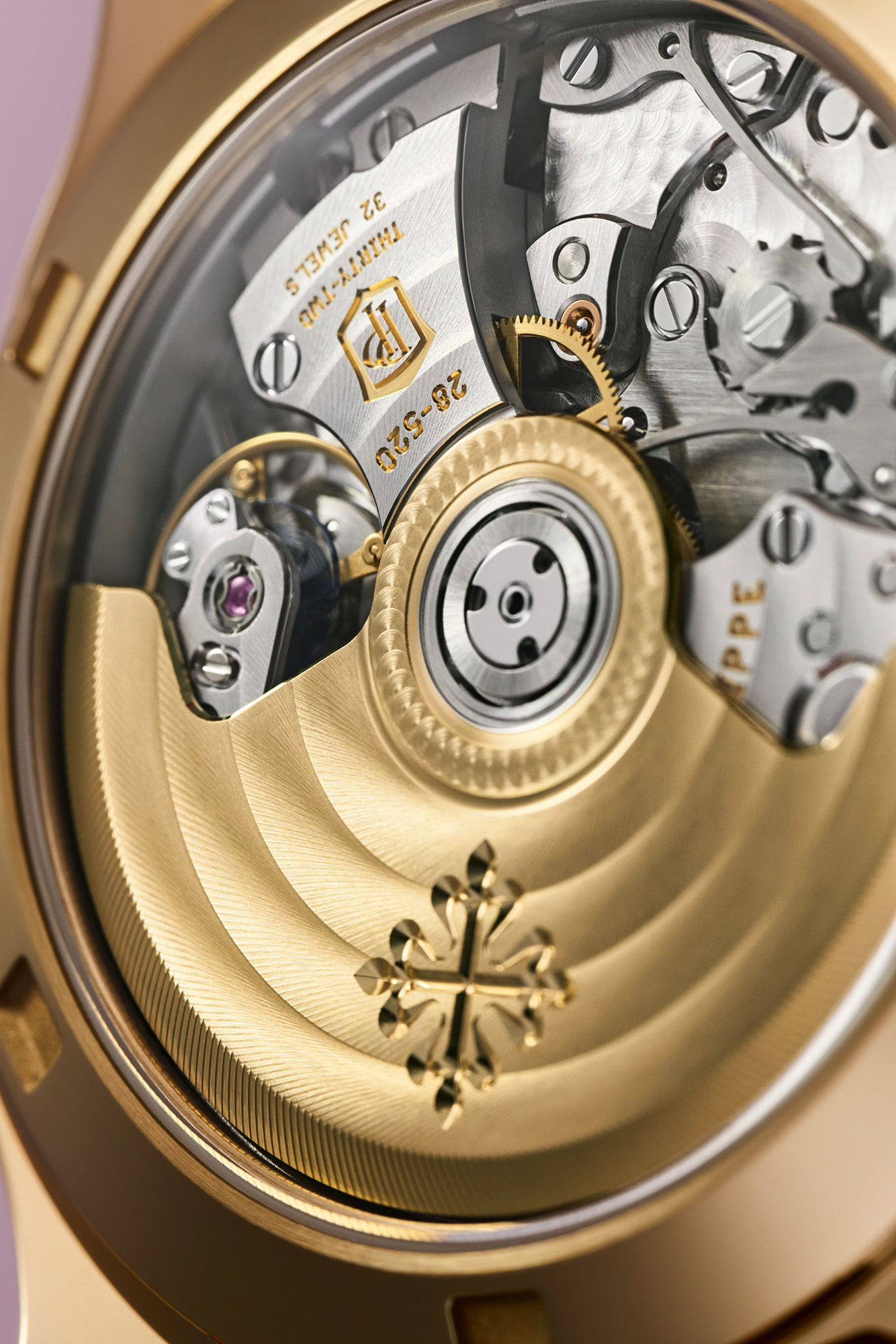 Patek Philippe touts the Aquanaut Luce “Rainbow” Chronograph as its first-ever ladies’ automatic chronograph, and the powerplant behind this achievement is the brand’s manufacture Caliber CH 28-520 vertical clutch automatic chronograph movement. The Caliber CH 28-520 is beautifully decorated in typical Patek Philippe style in images, with Côtes de Genève across the upper bridges, the lower bridges and baseplate rendered in two distinct sizes of perlage, mirror-polished sinks and anglage, and a 21K engraved yellow gold rotor topped by radial Côtes de Genève. Patek Philippe includes a high-tech Gyromax balance along with a Silinvar balance spring here, and its stated performance figures include a 45 to 55 hour power reserve at a 28,800 bph beat rate. The brand finishes the watch with a trio of included textured rubber deployant straps, rendered in bright red, clean white, and matte beige. 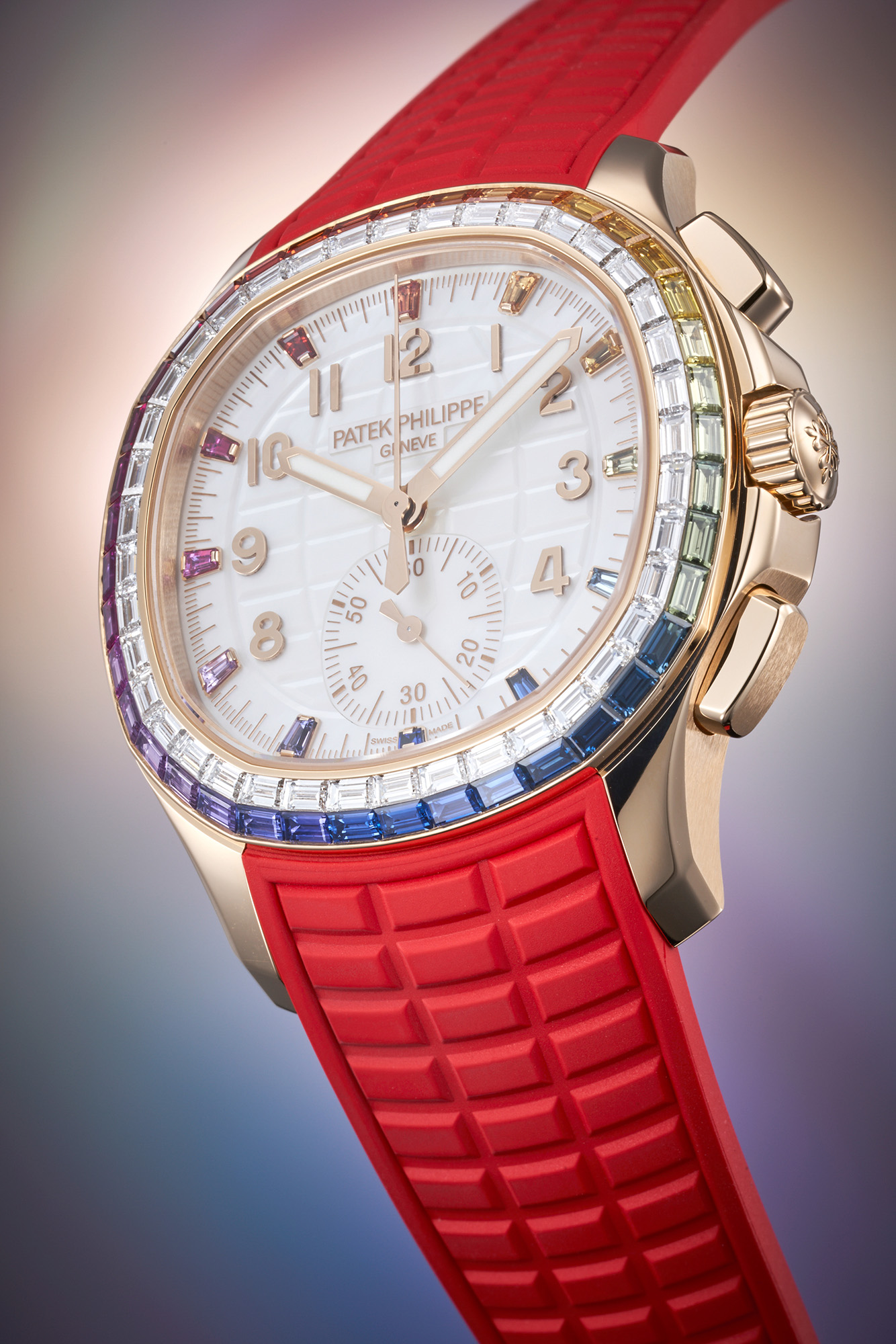