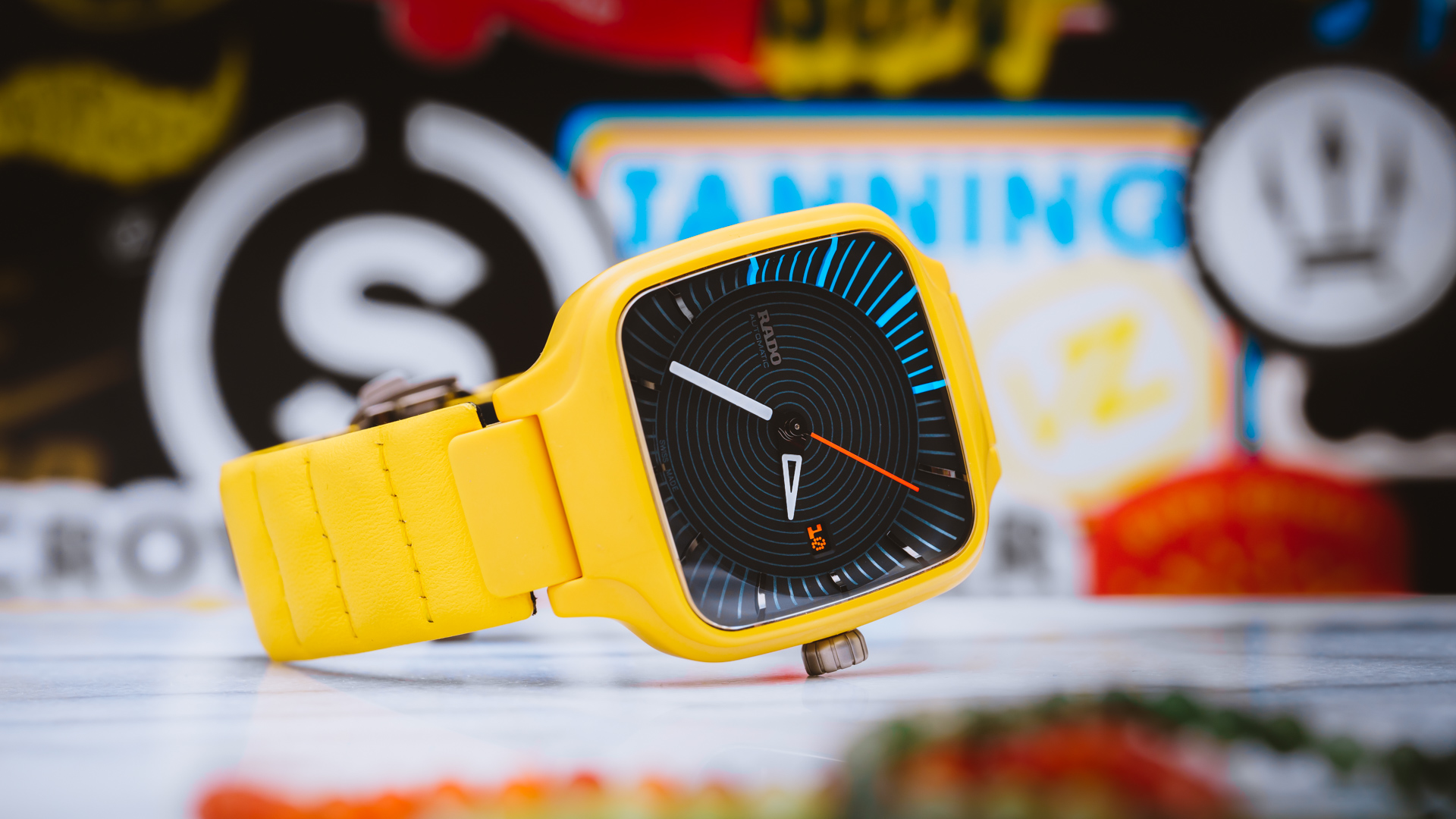 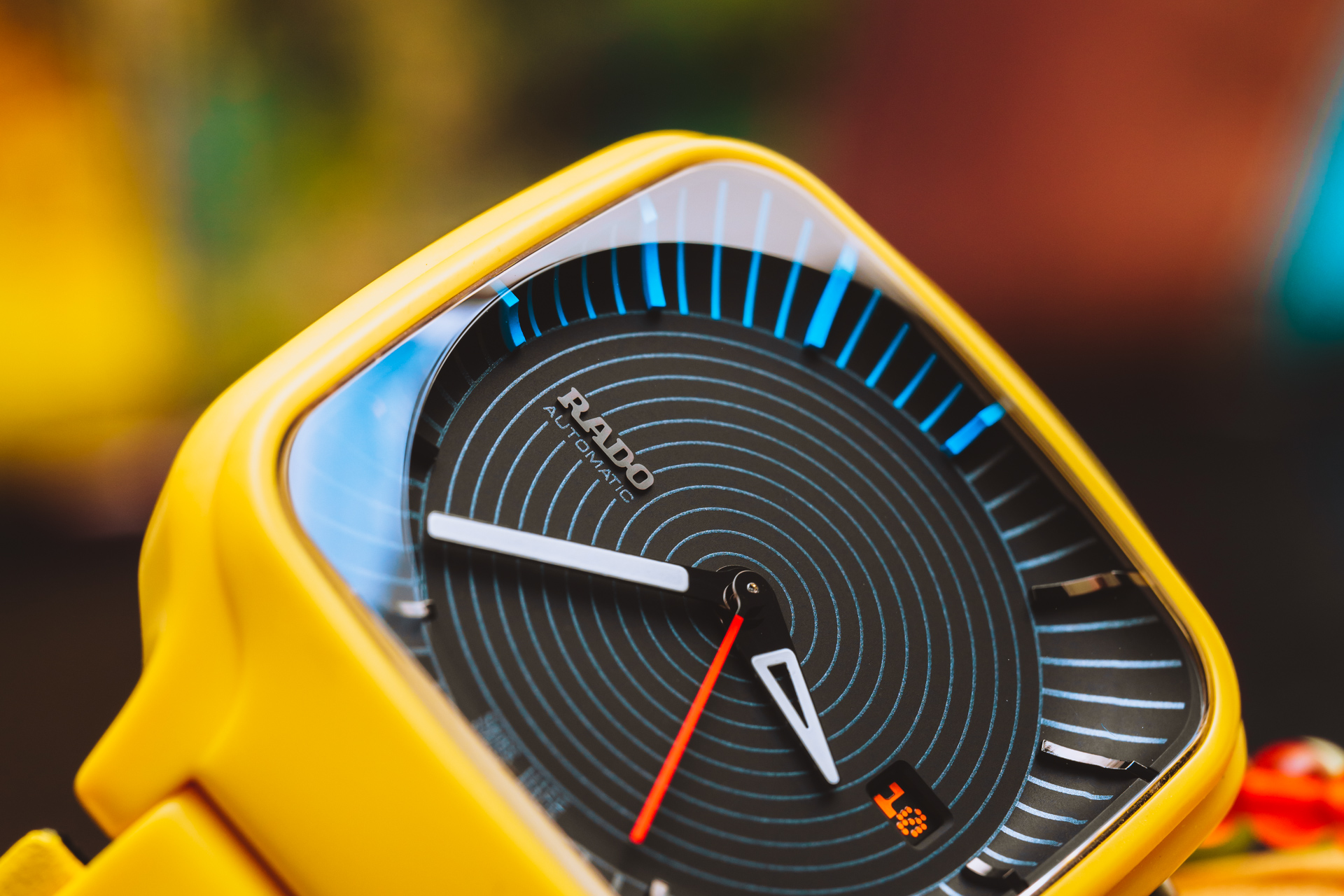 Anyone else burned out on heritage-inspired diver re-issues? Not to disparage the current trend in watchmaking, but it’s awfully nice to have something come across my desk that actually feels designed. Such is the breath of fresh air that is the Rado True Square in yellow ceramic, a 2021 Red Dot Design winner dreamed up by London-based firm Tej Chauhan. Bold, bright, and dripping with clever detailing, this charming new collab is every bit the antidote you’ll want to reach for when everything in your watch box starts looking a little too predictable. 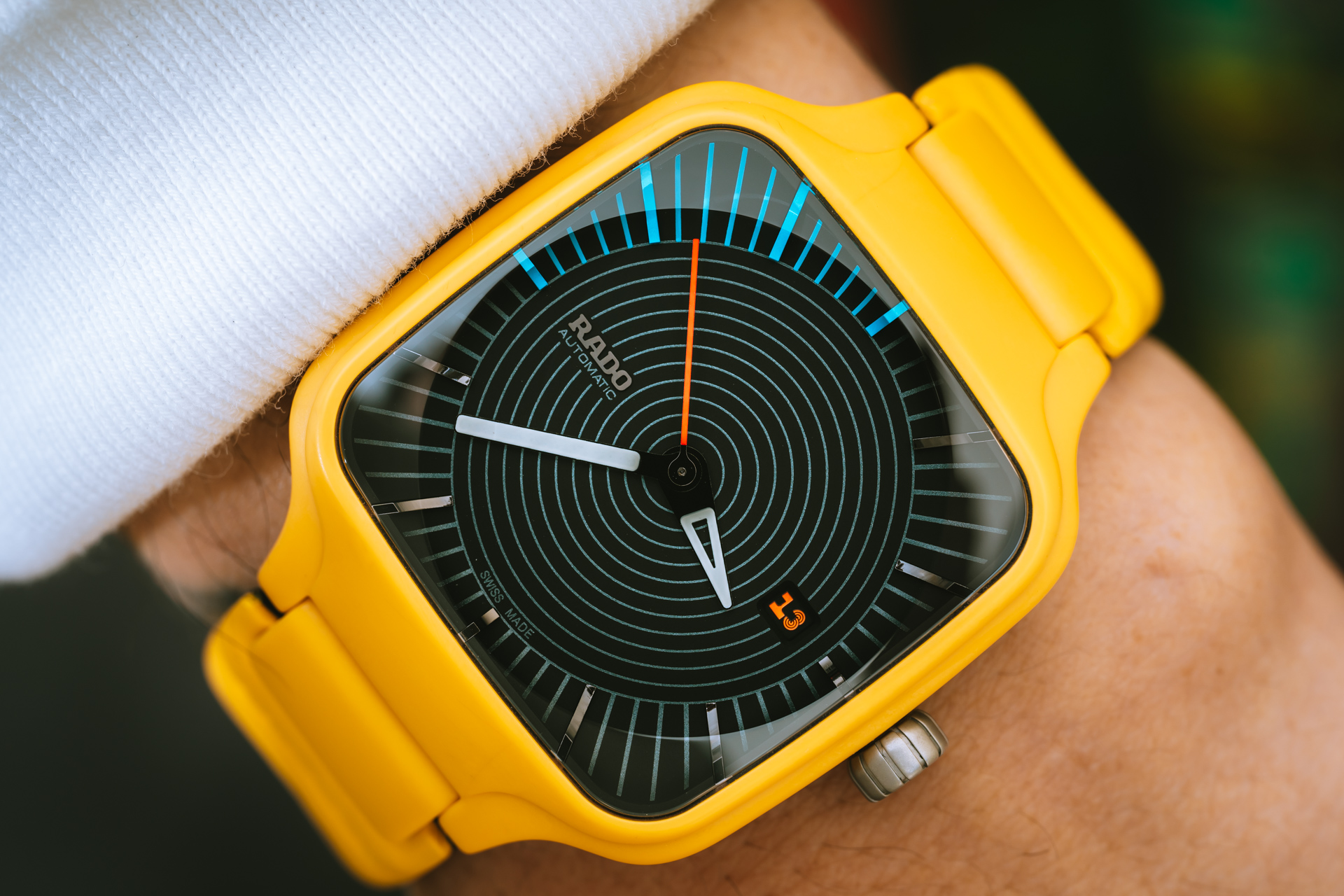 Before we get too deep in the weeds with the watch itself, it’s worth sharing that Tej Chauhan might be someone of an outsider in the watch space, but his path to international design acclaim started at Nokia, before starting his eponymous design firm whose clients include Panasonic, Ikea, Samsung, British Airways, and many more. Much of his work — and the work of his firm — seems to take inspiration from mid-century pop culture and old science fiction films. That sort of aesthetic already works extremely well with the vintage TV-shaped dial and gently rounded case design of the True Square, which presents itself as an ideal canvas for a designer like Chauhan. 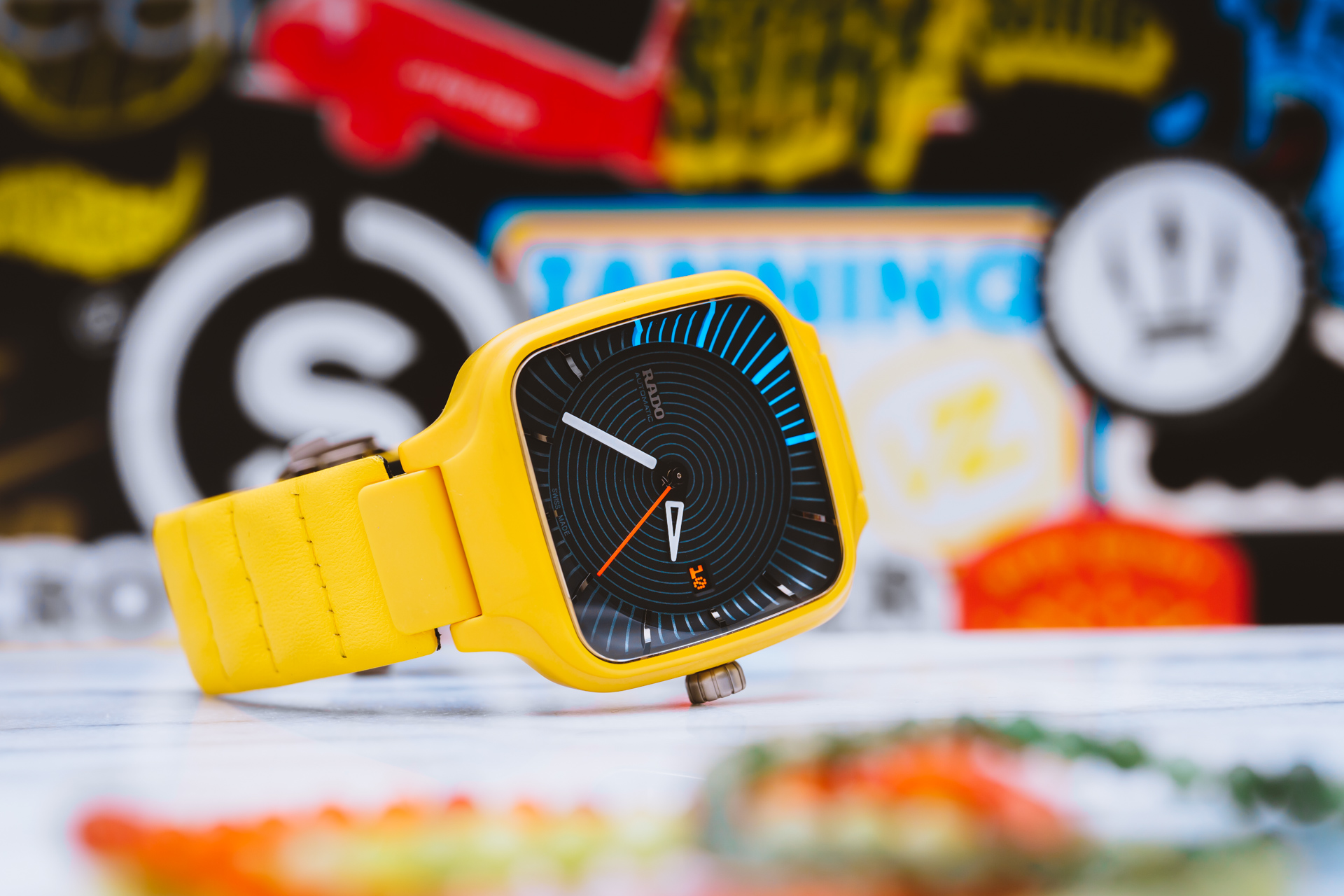 I’m generally of the mind that ceramic as a case material doesn’t lend itself particularly well to more sober designs, as the effect can be too easily replicated by PVD or DLC coatings. But when it comes to something bright and colorful, and perhaps more pop-art inspired — something like the ceramic Orlinski from Hublot or this True Square — it really comes to life. Chauhan was also wise to express this reference on a leather strap rather than a full ceramic bracelet – which breaks up the texture of the 38mm case (which wears quite comparably to a 40mm Apple watch) and offers a tonal break from all the colored ceramic while providing a softer, more tactile and organic touchpoint for the wearer. It also dramatically reduces the price point over the full ceramic bracelet options.

Price point aside, the real master stroke with this watch is how it simultaneously feels playful and almost toy-like while still maintaining an impressively high degree of detail and quality — avoiding the dreaded “plasticky” (and by association “cheap”) feeling inherent to many otherwise expensive ceramic watches. I shouldn’t really be surprised — Rado has a long history of ceramic mastery, from firing to finishing, and if you have even a passing interest in how a ceramic watch case is made, from soup to nuts, I’d highly urge you to check out this deep dive. 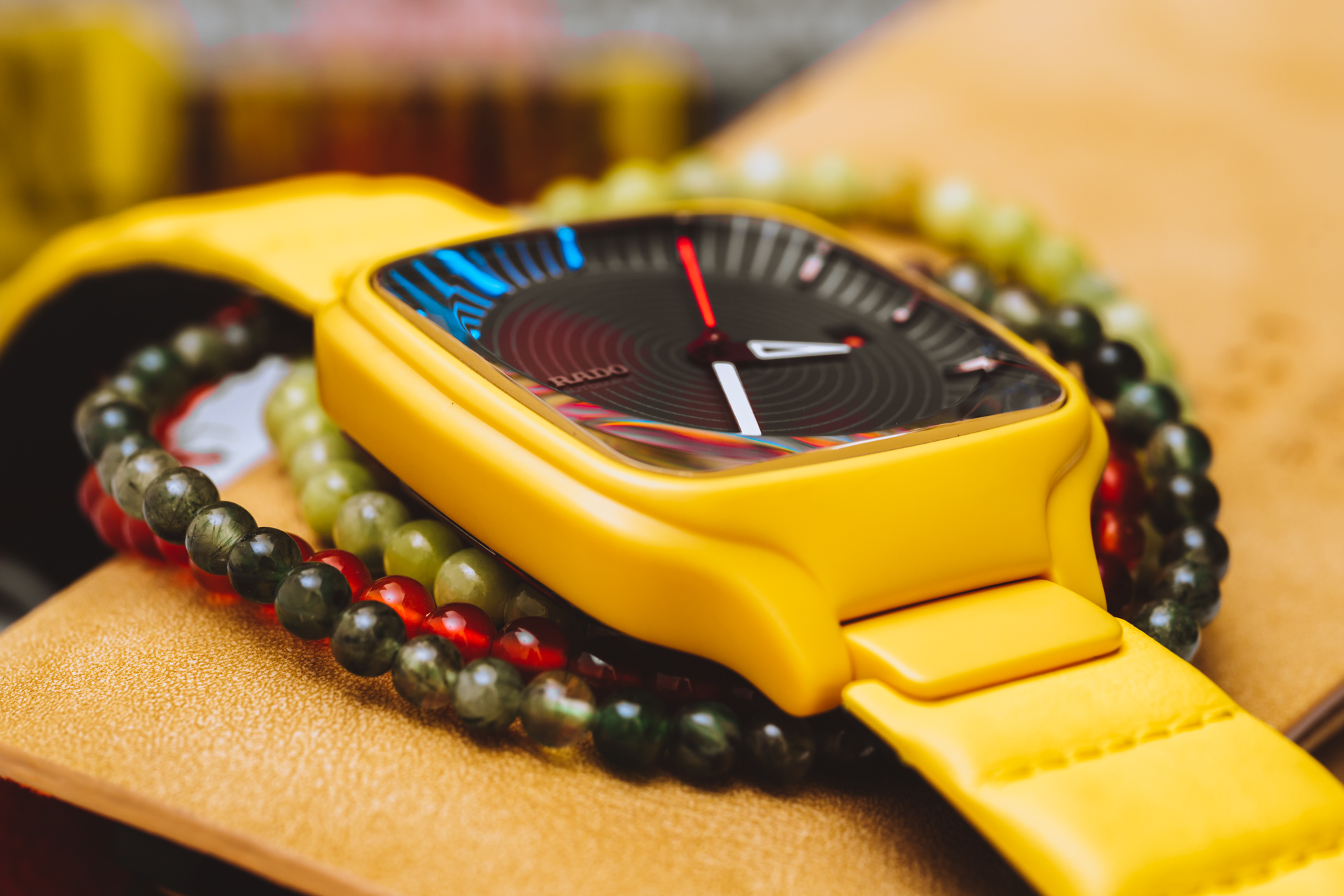 Like the aforementioned Orlinski, there are so many interesting angles by which to view the True Square, and you’ll likely delight in trying to find as many of them as possible. From the smooth and dry, matte-finished ceramic edges to the dial’s steeply curved edges and indices, then the sapphire crystal that looks as though it were once a whole sphere, now sliced in two, there is simply so much to take in here. Even the dial itself feels like it might have been inspired by staring into a vintage radar array from some whimsical space opera like Forbidden Planet, with its bright-color story, deep, concave edges and concentric circles. The beauty of great design — and by the same token, the hallmark of a great designer — is that the end result doesn’t need to force-feed you its inspiration (*casts a stern glance at Bell & Ross*) but instead urges you to consider its possible origin and thereby come up with your own narrative. 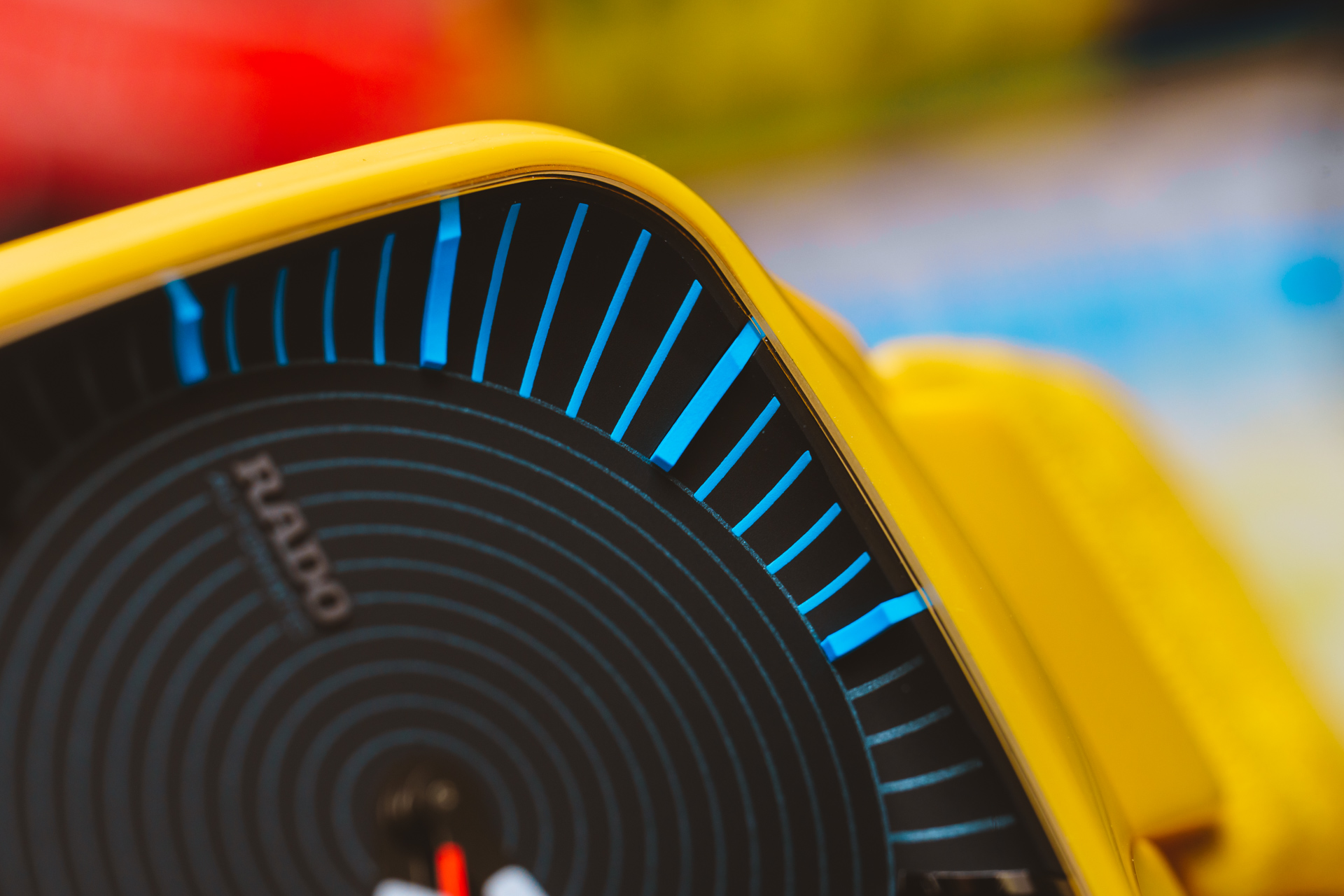 As with the rest of Rado’s Captain Cook and True Square offerings, this particular reference is powered by an ETA C.07 Powermatic base caliber, a three-hand movement with a date aperture and 80 hours of power that’s broadly used by a few other brands in the Swatch Group, including Hamilton, Mido, Tissot, and Certina. But the movement for the Chauhan edition gets a pretty novel upgrade in the form of a fully custom date wheel using a special “ever-changing” typeface of Chauhan’s own design. It’s quite a treat to flip through the date aperture and see something entirely new each day. Why more brands don’t do more interesting date wheels, I will never understand, and this is without a doubt the best I’ve ever seen for a watch using an otherwise off-the-shelf caliber. It’s also the sort of thing that proves, in a nutshell, that the designer’s watchful eye was present over the entirety of the project, and the end result is something fully cohesive and believable down to the smallest level. At the end of the day, any great collaboration lives and dies in the details, and it’s usually the collective of minute details that add up to yield something far more impactful. 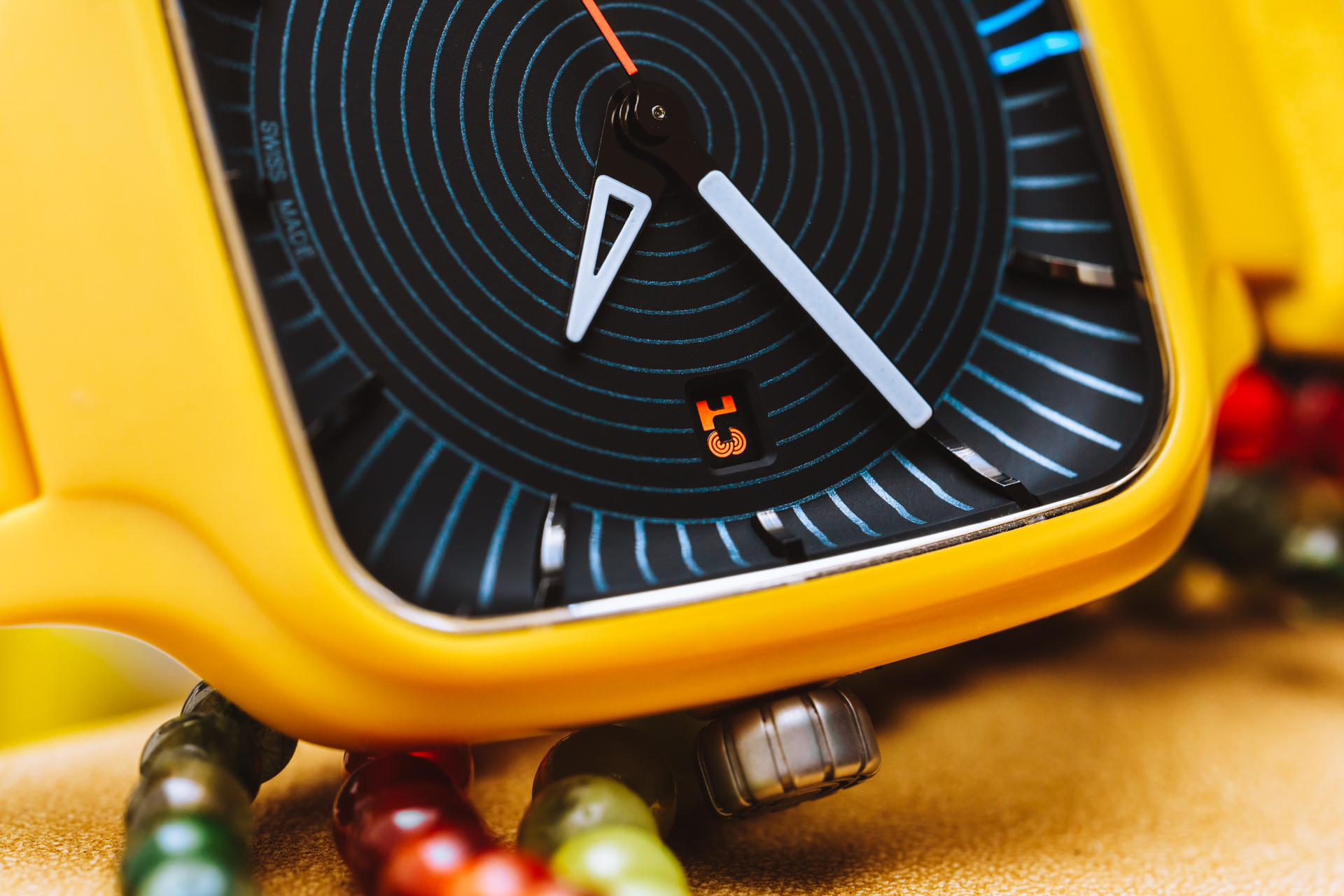 It’s the sort of watch that feels a lot like the early days of streetwear and sneaker collabs when names like Benny Gold, Jeff Staple, and Keith Hufnagel (RIP) lent their magic touch to established legacy brands. And what makes this one extra special is that it’s coming from Rado — maybe one of the last brands I’d expect to produce something like this in all of Swiss watchmaking. However, it’s the overall execution of the design brief and the cohesion as a piece of wearable pop art that make this an absolute joy on the wrist. 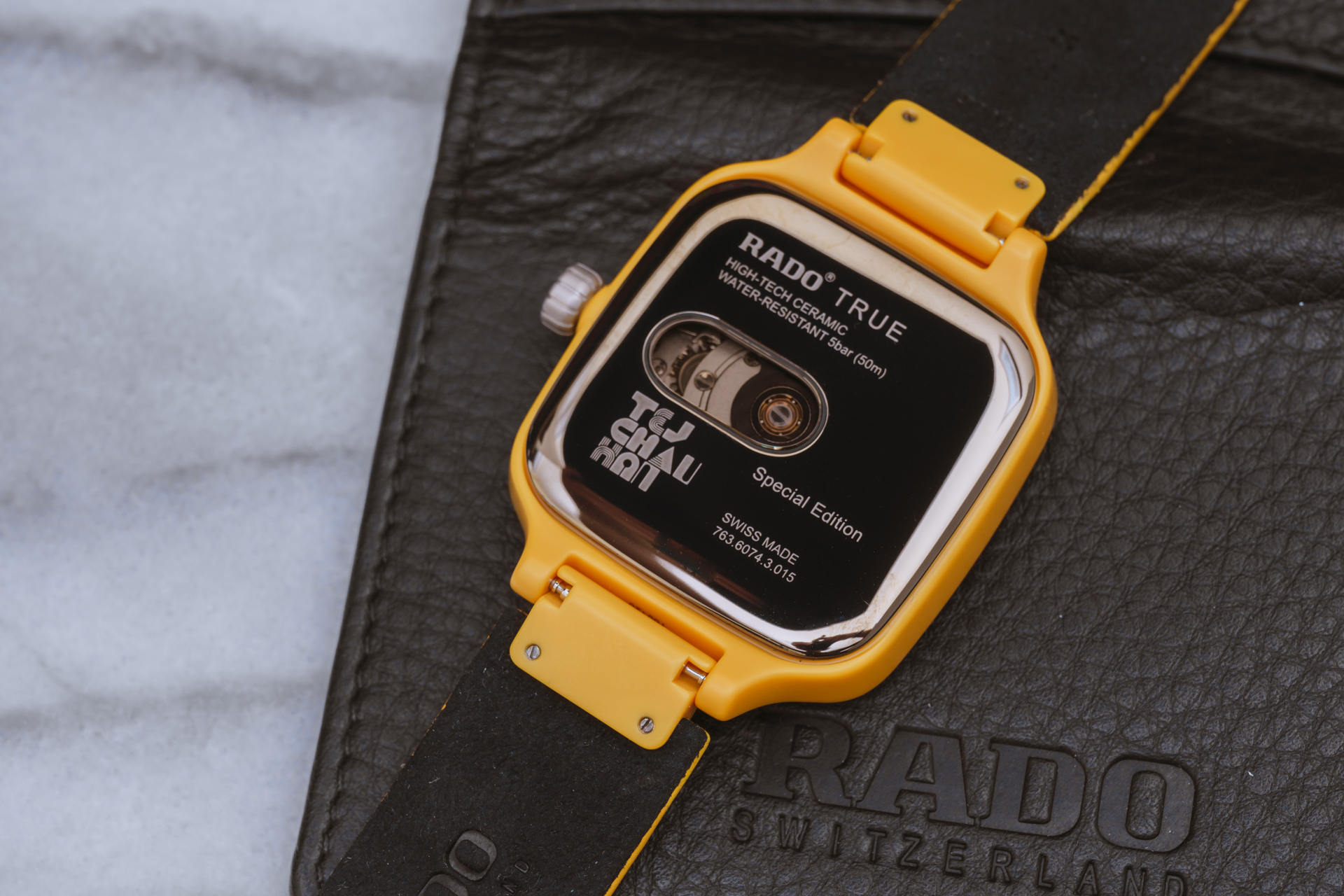 So are there downsides to colored ceramic? This particular reference reads bright yellow with subtle tints of orange depending on the light. It’s a dry, matte color, which I believe was a strong choice, as overly polished ceramics tend to come off looking cheap and run the risk of overpowering some elements of the dial. Now, being a matte surface, no material (even ceramic) is 100% immune to superficial marks, especially lighter-colored ceramics, which are prone to showing scuffs. Sneakerheads know what I’m talking about. And sneakerheads also know that keeping a Magic Eraser handy will help keep this watch clean, so long as you don’t drop it on the floor or smoke it on a doorway.

The Rado True Square designed by Tej Chauhan (ref. R27074155) isn’t technically a limited edition, though it is limited in production, and has a retail price of $1,800. You can learn more about the collaboration at rado.com.
Advertising Message