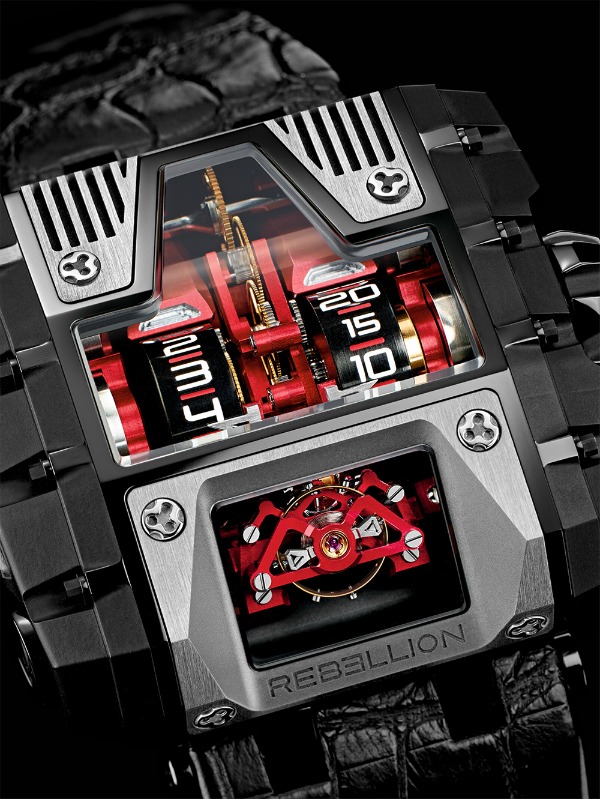 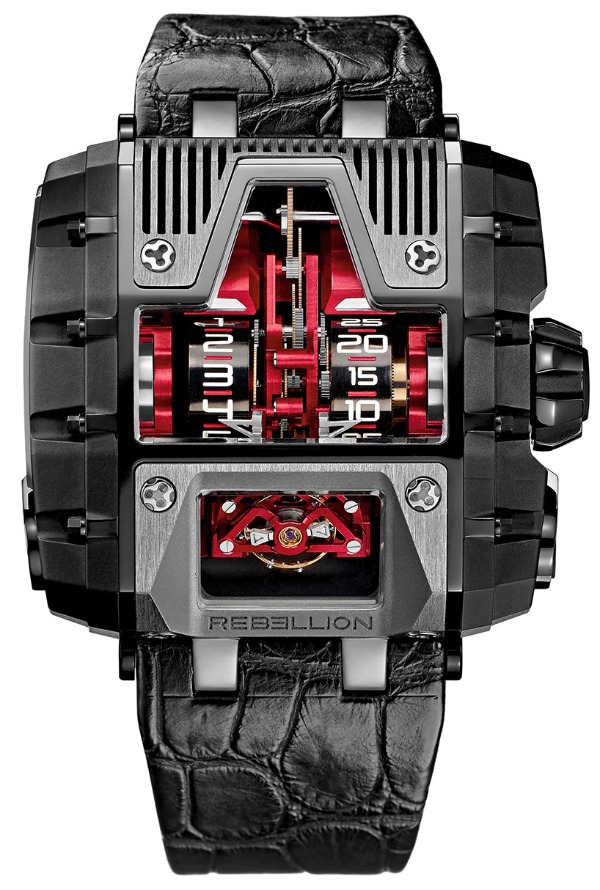 In debuting the Gotham versions of the T-1000 watches, Rebellion playfully warns to “lock up your daughters.” I am not 100% sure what that means, but apparently this watch that looks like a part that fell off of a Transformer is out to get your girls. Mixing a range of science-fiction and comic book themes into one, the Rebellion T-1000 is a combo of un-focused culture masculinity, and the world’s longest power reserve mechanical movement.

When the T-1000 came out a few years ago it boasted the world’s longest power reserve at 1000 hours. You can see how far they have come with the design of the watch since the original. That is over 40 days of power, and beats the A. Lange & Sohne Lange 31 and the Jacob & Co. Quenttin. The T-1000 (no, sadly not the Terminator fiend) has six mainsprings for the job. They are wound in parallel using a chain system and are specially inclined to maximize precision. Nevertheless, this watch likely has one hell of a torque curve (meaning that the accuracy fluctuates wildly). I don’t even want to think how long it will take to wind it by hand. Seriously, if this watch doesn’t come with winder to attach to the crown and wind it, I would just say “there goes your lunch break.” 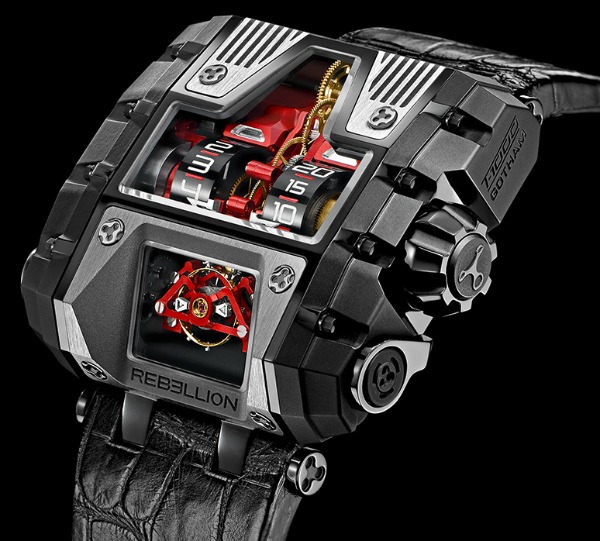 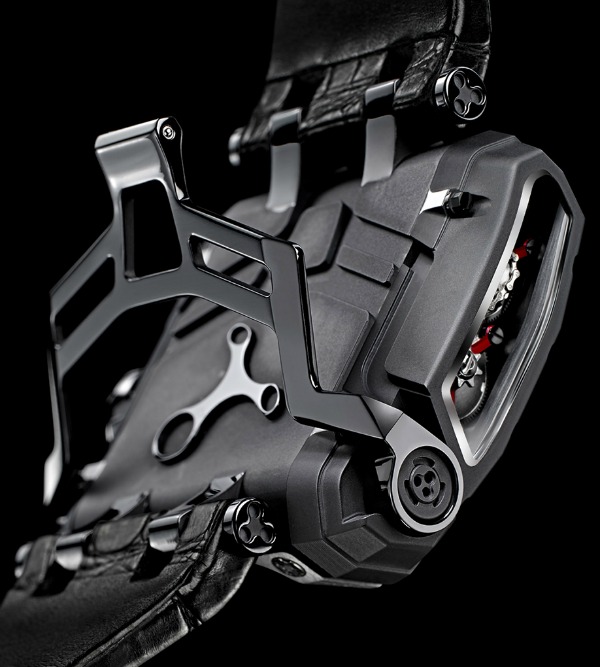 Actually, Rebellion has sort of thought of that last part. The rear of the case has a lever-like system than you can use to wind the movement. It apparently generates ten times as much winding power, allowing for relatively speedy winding of the movement. That is pretty cool, except for the fact that you need to take off the watch to wind it in that fashion. “Just cranking up the ol’ watch over here.”

The linear style movement and roller-based system for telling the time no doubt reminds me of Cabestan. Rebellion doesn’t do it quite as nicely, but it works in a sort of more rugged, industrial way. This is not a watch for Batman, or Ironman, or most other heroes. This feels much more like a villain’s watch. It is like a tank and a chainsaw got together and decided to try out as a prop for the next Aliens vs. Predator movie (that will no doubt suck except for its props). 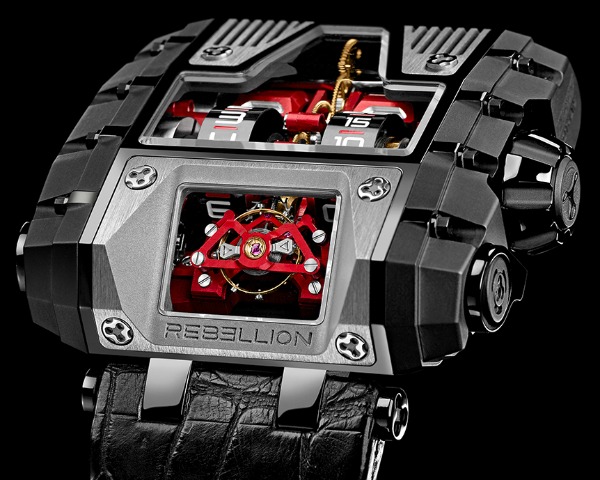 The T-1000 Gotham case is 52.2mm wide in either natural or DLC black titanium. The red and black accents are pretty cool. No tourbillon here (probably a good thing), but a nice exposed balance wheel. I applaud Rebellion’s (continued) effort in not only making the watch look like something out of a teenage comic book dream, but also building it around a bragging-rights worthy mechanical movement – no matter how utterly impractical it is. A dream or a headache to look at, we get our kicks from stuff like this. The T-1000 Gotham watch will be limited to just 25 pieces total. You even get to choose the color of the movement (red, purple, blue, gold, or black). Price for the Rebellion T-1000 Gotham will be just north of $100,000. rebellion-timepieces.com 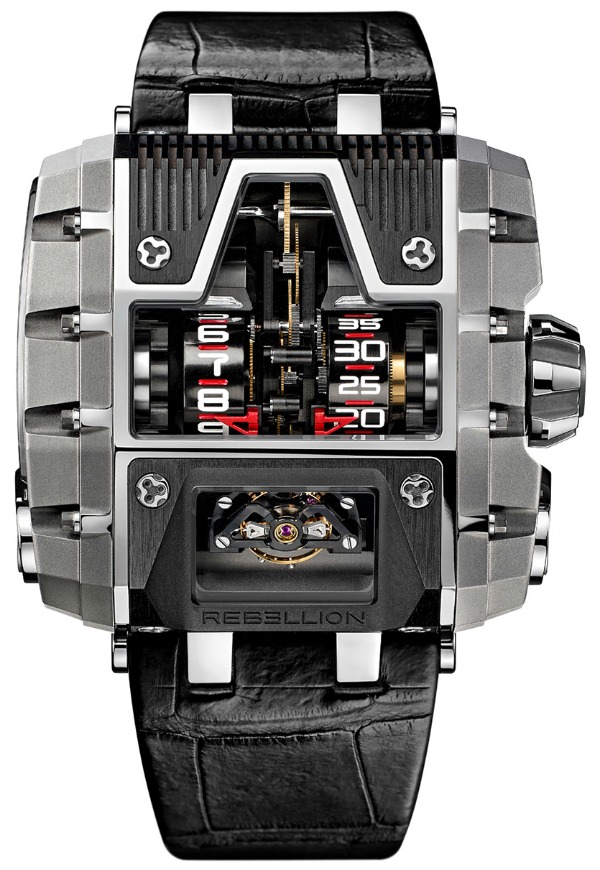 The T-1000 Gotham is a limited edition of 25 pieces available in two different combinations of natural and blackened titanium, with a choice of black, gold, red, blue or purple movement.