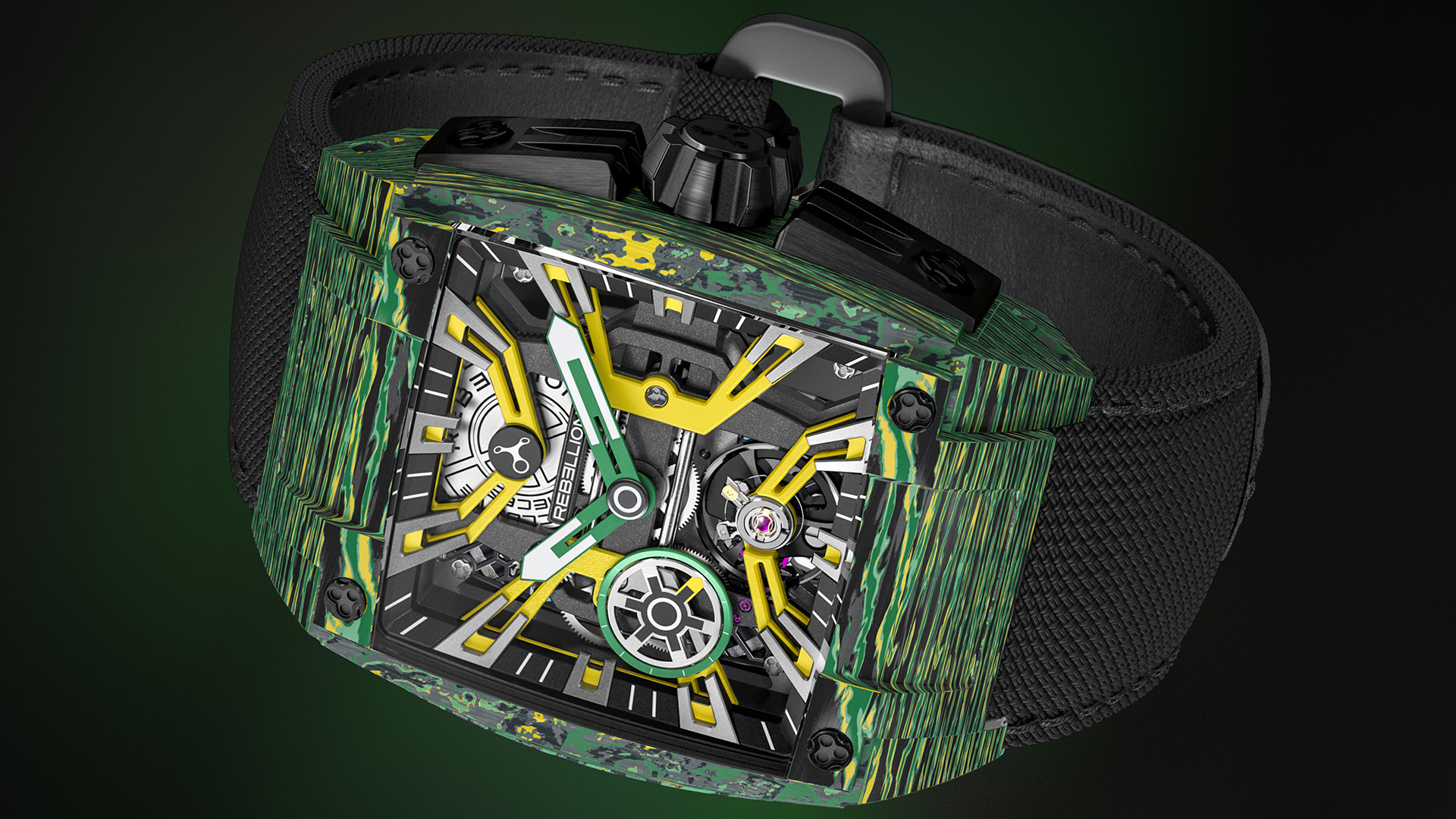 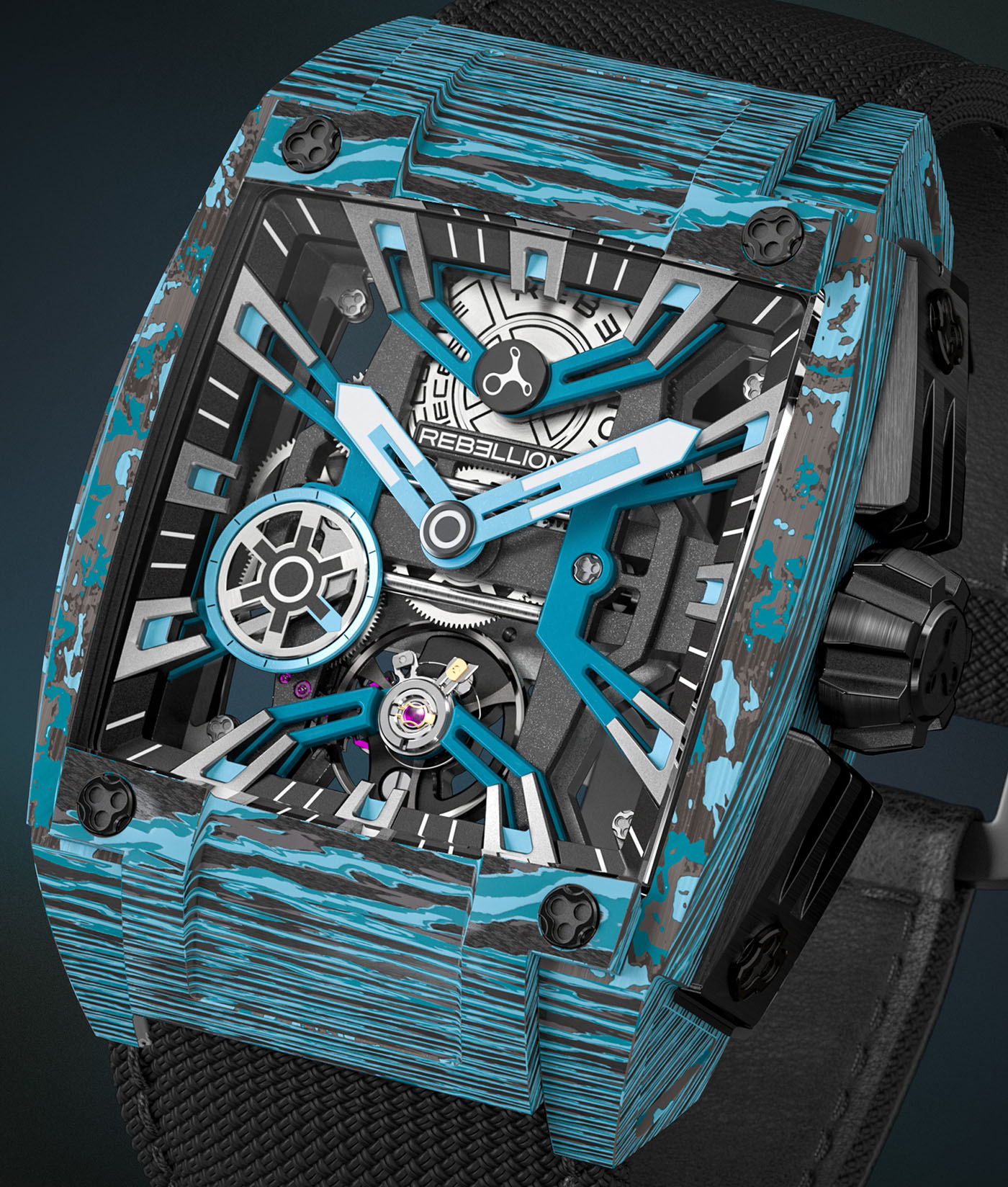 There’s no shortage of watch brands that aim to capture the look and feel of motorsports. Very few, however, have the actual on-track experience (outside of sponsor decals and watches on drivers’ wrists) to back up this racing ethos. Boutique brand Rebellion is an exception to this, with a multi-faceted business approach that also includes running its own racing team at events as varied as the Dakar Rally and the 24 Hours of Le Mans. This technical knowledge and lightweight engineering shine through in its watchmaking efforts, as well, and its latest release is no exception. The Rebellion Re-Volt 3 Hands Carbon-Colored series takes an audaciously vibrant approach to the ultramodern carbon sports watch, with novel engineering solutions that should make for a design that is as robust as it is striking. 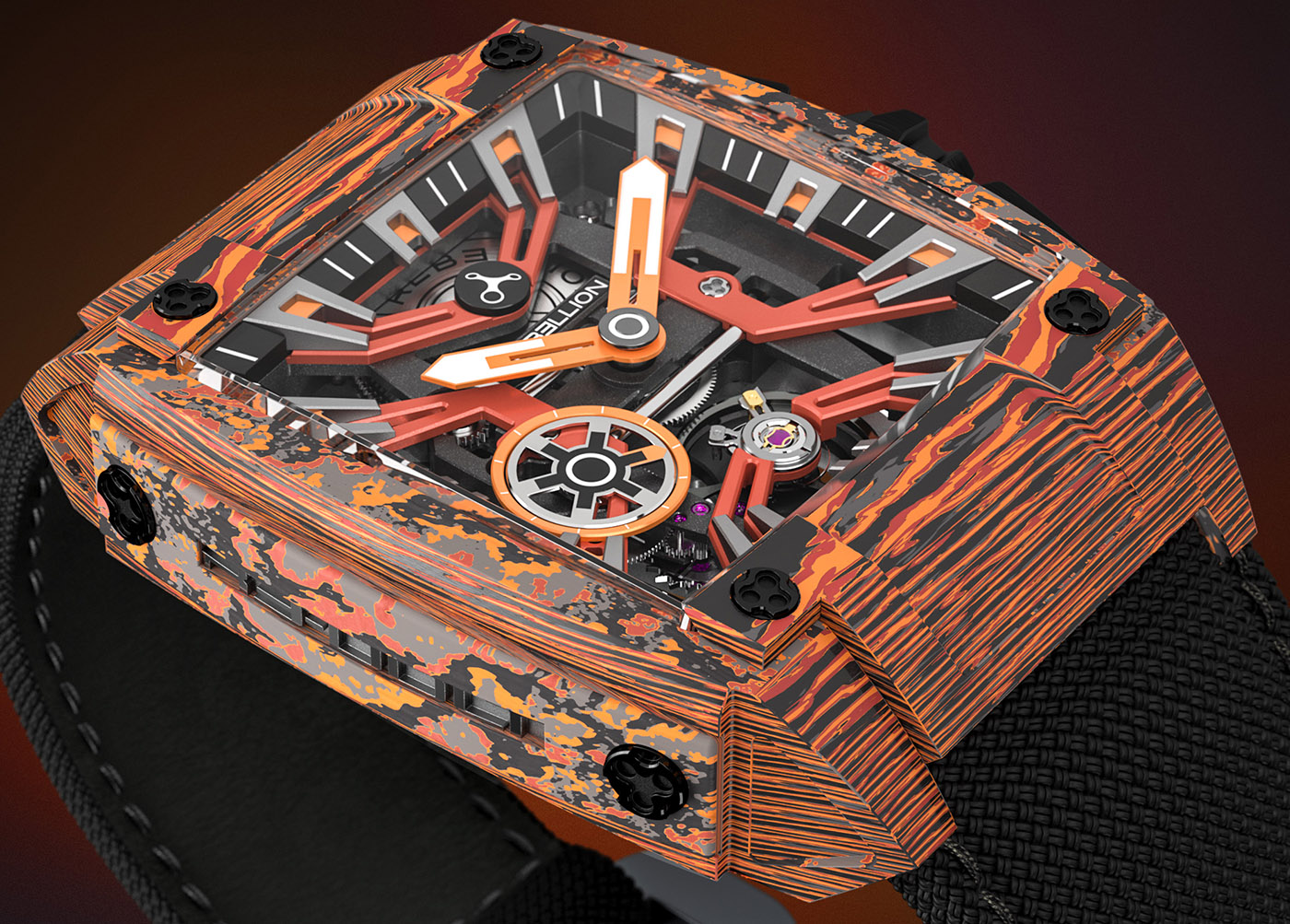 Rebellion renders the 38.5mm case of the Re-Volt 3 Hands Carbon Colored in a trio of dramatic colorways. While multi-tone forged carbon cases are not a strictly new idea, Rebellion’s approach is meticulous and engineering-focused to ensure a durable final product. In short, the more pigment that is added a base carbon-epoxy resin mixture, the weaker the final carbon composite becomes. The simple solution to this is to keep the use of color to a minimum, but rather than compromising its creative vision Rebellion instead revamps its use of carbon altogether. Rather than the usual forged carbon construction method, the Re-Volt 3 Hands Carbon Colored instead uses a process it refers to as “fat carbon.” This involves using carbon roving, a coiled series of long carbon filaments not unlike a carbon fiber rope, to build the base carbon case block. Rebellion claims this is a far more rigid solution than standard forged carbon, easily offsetting the loss of structural rigidity usually associated with brightly colored carbon composites. Once the rough case has been made in this way, Rebellion then mills the final case shape from this rough block, which exposes the random, chaotic pattern of striations inside the material. The rectangular case design certainly bears the hallmarks of this milling process, with sharp facets and recessed accents on the short wedge lugs, but Rebellion uses this method to create a variety of nuanced touches. This is especially evident on the 9 o’clock case side, where the brand includes bold applied “Re-Volt” lettering inside a milled notch in the planar main surface. This angular, squared-off shape also makes the case feel far larger than its dimensions in initial images, although the actual overall thickness measures in at a manageable 13.5mm. Of course, the real focal point of this case design is the colorful striated carbon itself. With a dense, random organic pattern that calls to mind both Damascus steel and modern camouflage patterns in images, this material takes on new personalities with each of its three available colorways. The Arctic Storm version puts the most focus on the blacks and grays of natural carbon in images, augmenting these with two shades of icy blue. By contrast, the Mars Valley model brings to bear a wild assortment of reds and oranges alongside the basic black and gray hues of carbon. It’s the Toxic Storm variant which gives the most audacious look in images, however, with vibrant, almost radioactive greens and yellows shining through the monochrome carbon base. Rrebellion rates all three variants of the Re-Volt 3 Hands Carbon Colored for a middling 50 meters of water resistance. 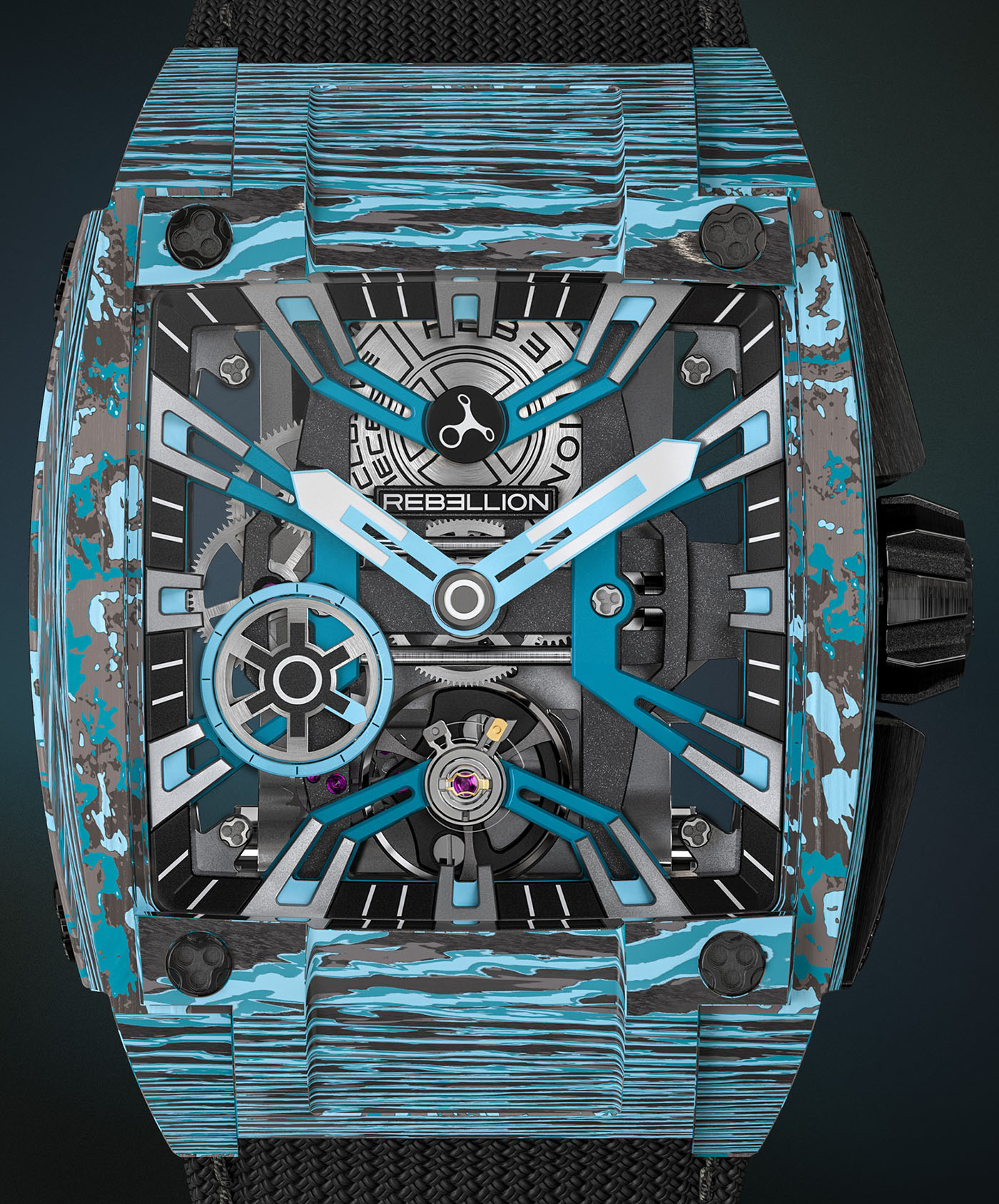 All three variants of the Rebellion Re-Volt 3 Hands Carbon-Colored share the same layered skeleton dial design. Each model begins with a sloping, stylized outer chapter ring with integrated forked indices, featuring exaggerated points that both aid legibility and increase the sense of visual aggression in images. Rebellion then adds a splash of color to the dial designs with a set of four vibrantly finished bridges (yellow for the Toxic Storm, red-orange for the Mars Valley, and cobalt blue for the Arctic Storm) that help to emphasize the depth of the layered matte black skeleton bridges below while starkly framing the movement’s visual highlights. Timekeeping functions are handled by a set of skeletonized straight sword hands, featuring additional accent colors to contrast the bridges. At 8 o’clock, Rebellion mounts a small skeleton running seconds subdial with a multi-spoke seconds hand design that plays upon Rebellion’s extensive racing heritage. 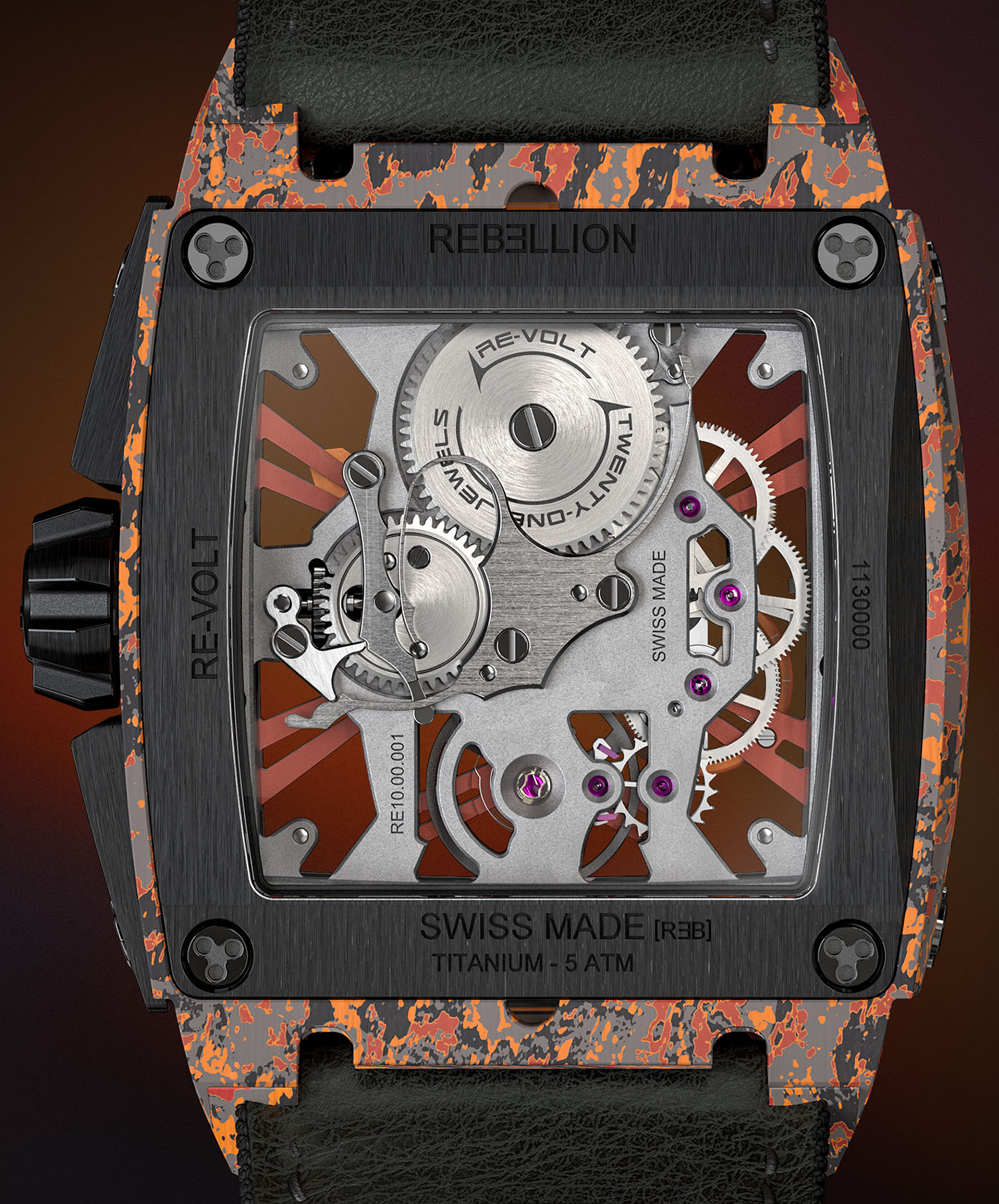 Rebellion powers the Re-Volt 3 Hands Carbon Colored with a proprietary in-house handwound skeleton movement. Rebellion’s aesthetic focus for this movement is more sculptural than purely finishing-driven in initial images, although the plates and bridges do show a handsome mix of matte blasting, brushing, and polished anglage through the sapphire display caseback. The form of the mainplate is complex and futuristic, however, with an intricate series of skeleton cutouts that frame key elements including the gear train, the dramatic black balance wheel at 6 o’clock, and the engraved mainspring barrel. In terms of performance, this movement offers solid if unspectacular figures, including a 48 hour power reserve at a 28,800 bph beat rate. Rebellion fits the watch with a tapering black textile strap with hook and loop closure, or an optional vulcanized black rubber strap for a rugged and ultramodern sporting look. 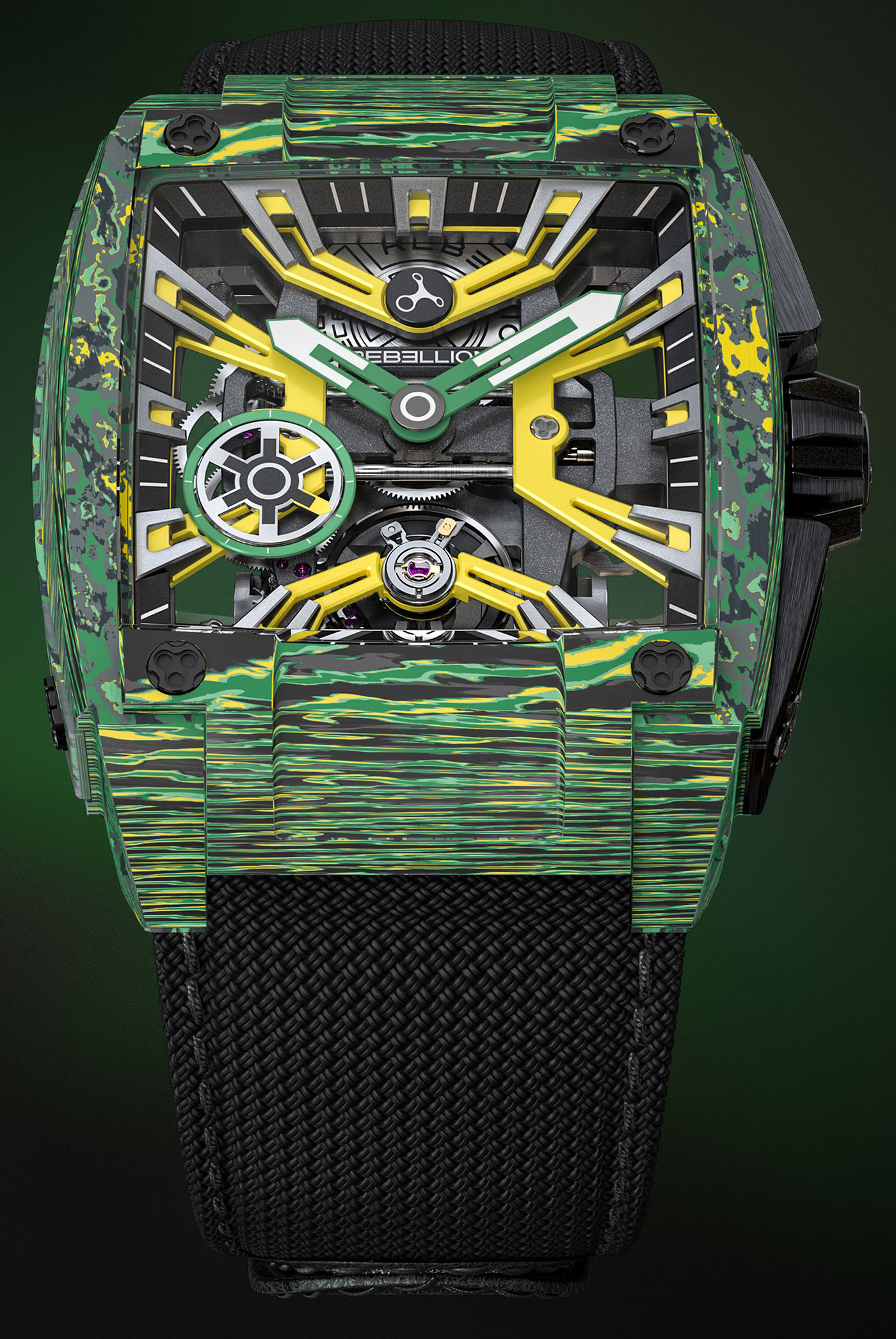