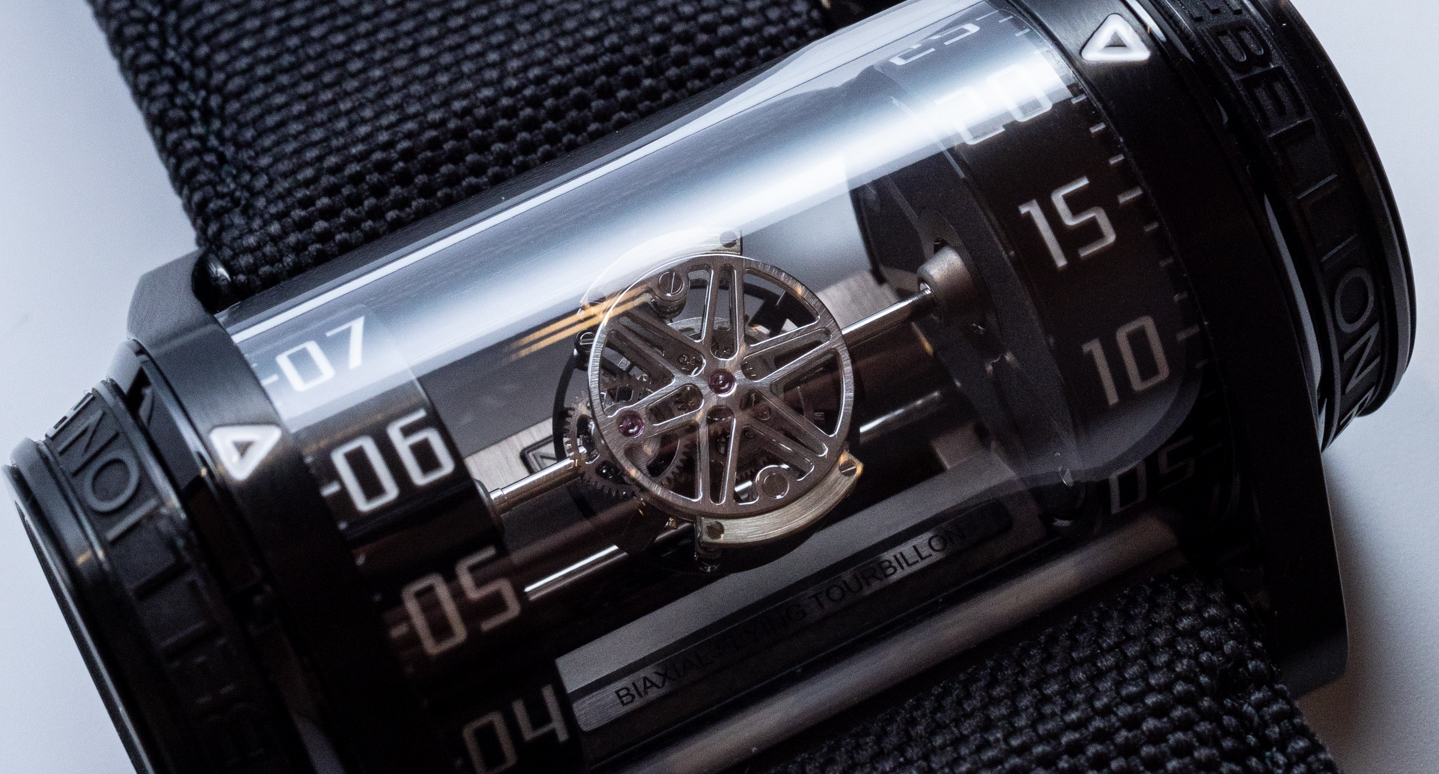 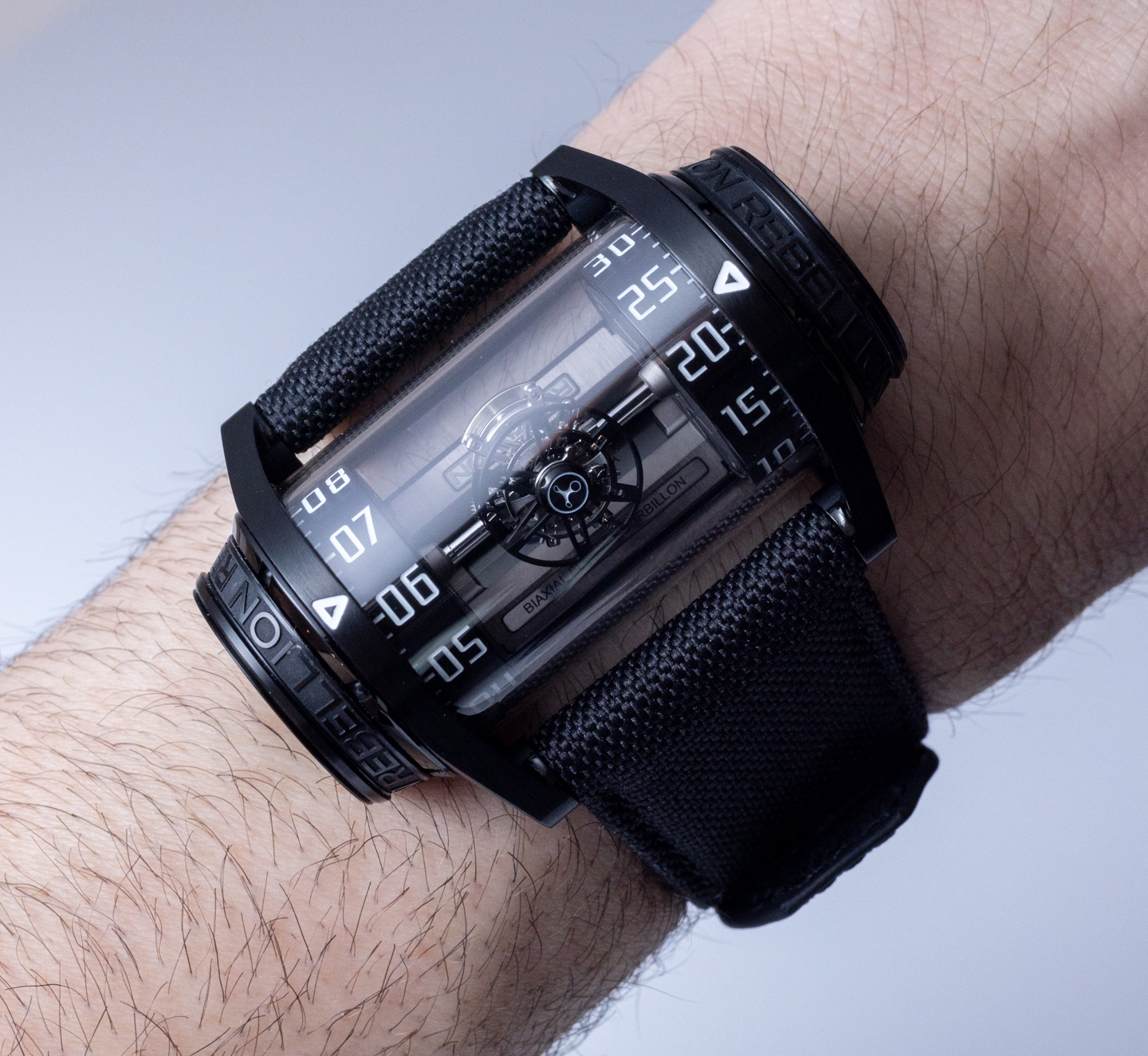 Debuted at Watches & Wonders Geneva 2022, the newest Rebellion brand watch is a totally revamped version of the company’s highly avant-garde WEAP-ONE that introduced the idea of wearing a tourbillon-equipped cylindrical canister on your wrist. The new WEAP-ONE Biaxial Flying Tourbillon doesn’t replace the original model but is rather a smaller, less expensive, and more practical re-think of the concept. aBlogtoWatch has not yet done a hands-on of the original Rebellion WEAP-ONE (though one is coming soon), but you can see more about it here in our interview article with Fabrice Gonet who designed it for Rebellion. I’m actually still not sure how Rebellion wants us to pronounce the name of the watch but I like to call it the “whep one” (which, to me, sounds better than “weep one”). 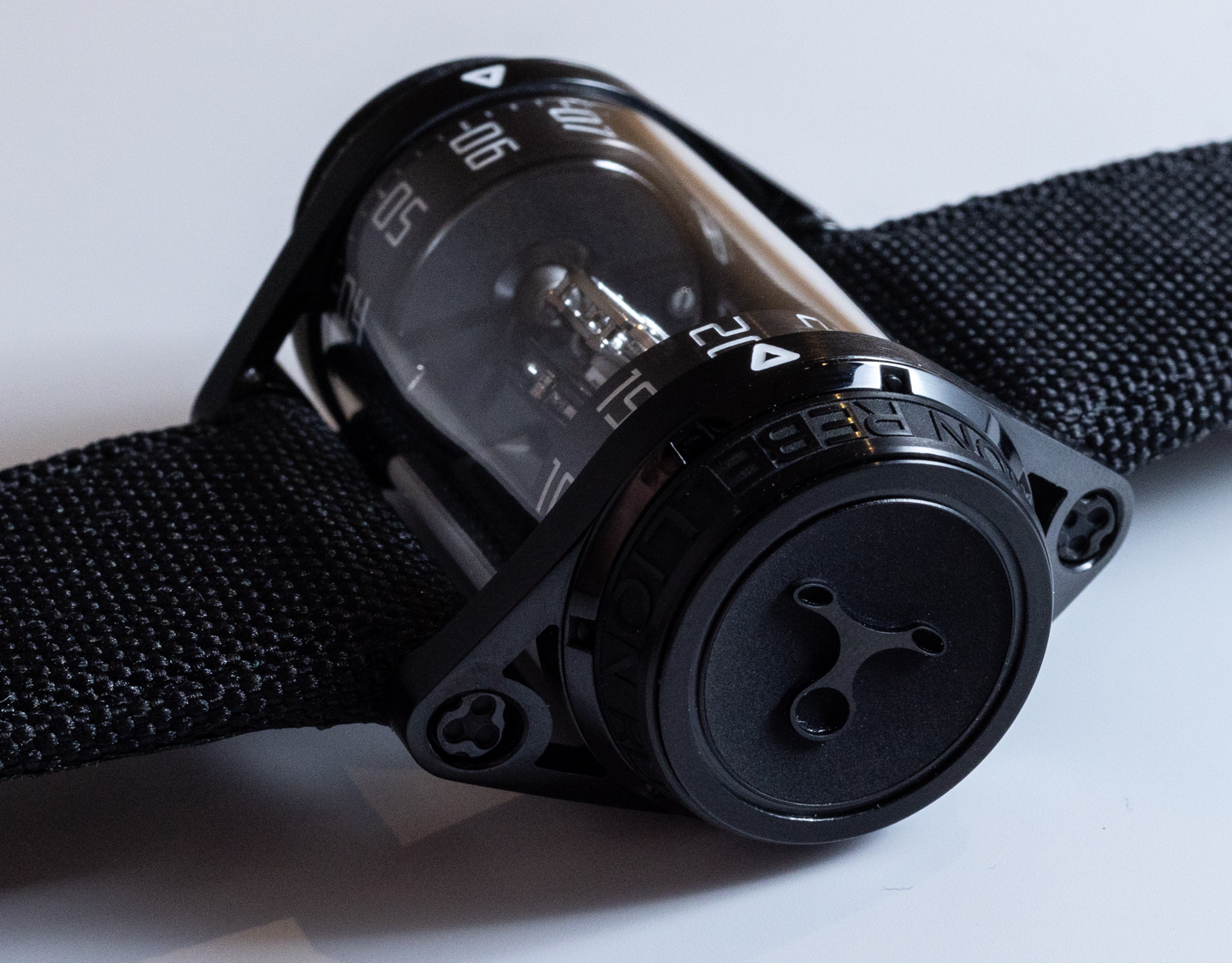 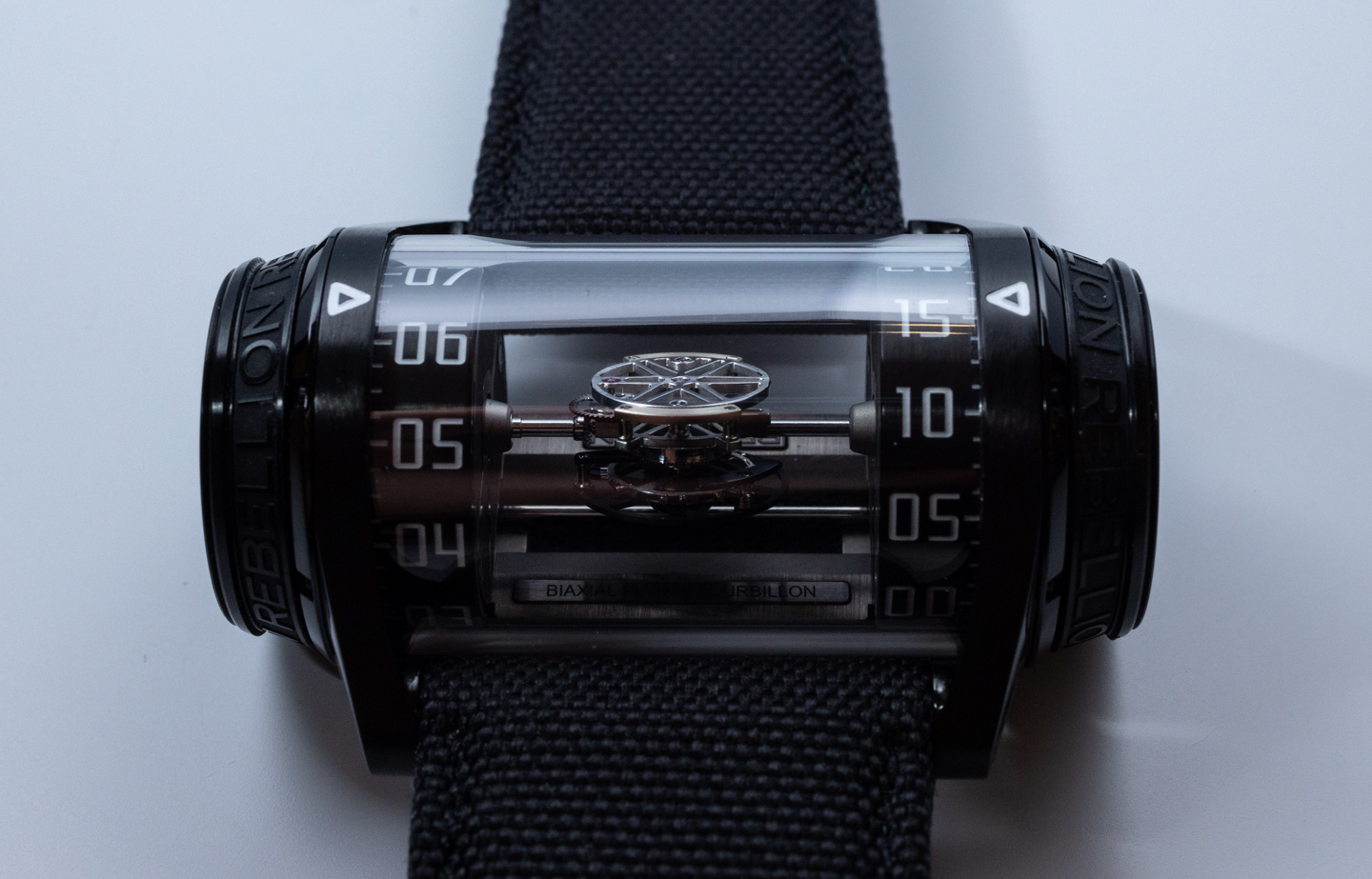 Narrower and worn closer to the wrist, the Rebellion WEAP-ONE Biaxial Flying Tourbillon is still a thoroughly weird wristwatch experience for people who need that type of disruption in their lives (there are plenty of consumers for this out there). That said, assuming you don’t really need to wear tight sleeves, the wearing experience and ergonomics aren’t too shabby for this second-generation WEAP-ONE watch experience. Rebellion gives measurements of 26mm-thick by 52.85mm wide. As you can see there are other ways to measure this odd case shape but, on my wrist, you can see it is quite wearable. The case is produced from black DLC-coated titanium and currently comes in two color variants including this mostly black and white model, as well as a green and black model. The case is also water-resistant to just 10 meters, so let’s not assume you are wearing a small diving capsule on your wrist. 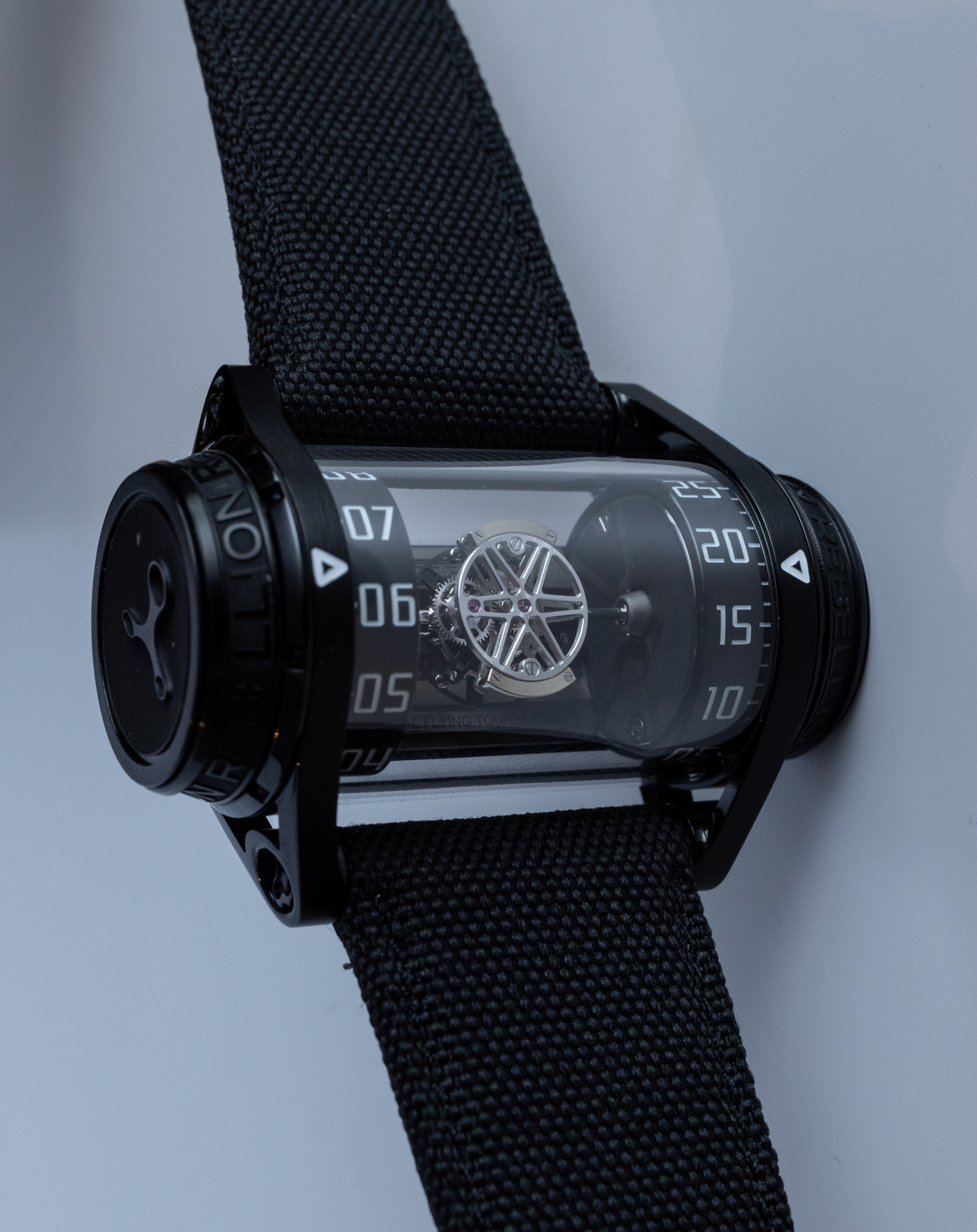 The center part of the case is a sapphire crystal tube that offers a view of the two rollers that indicate the hours and minutes respectively, as well as the centrally mounted biaxial tourbillon structure. The tourbillon is first mounted on a horizontal rod that looks a bit like a spit. Similar to beach BBQs, the tourbillon rotates on this metal rod as the first axis of the tourbillon. The second axis of the flying tourbillon is a more traditional tourbillon, spinning as it rotates around its own axis.

Developed for Rebellion by Swiss Concepto, the movement inside the WEAP-ONE Biaxial Tourbillon is simple but satisfying. It is also a work of visual trickery, as the case doesn’t appear to have a movement in the traditional sense outside of the exposed tourbillon-style regulation system. That’s because the mainspring and other components necessary to operate the mechanical watch movement are “hidden” in the two large drum-rollers that indicate the time. Flanking these drums on each end is a crown that the wearer turns. One crown acts to wind the manually wound movement, and the other crown (when pulled out slightly) adjusts the time. The movement operates at an impressive 4Hz (most similar tourbillons operate at 3Hz or less) and has 50 hours of power reserve. All I would have liked in addition to this is a power reserve indicator so that it was more convenient to know when it was time to wind it up again. 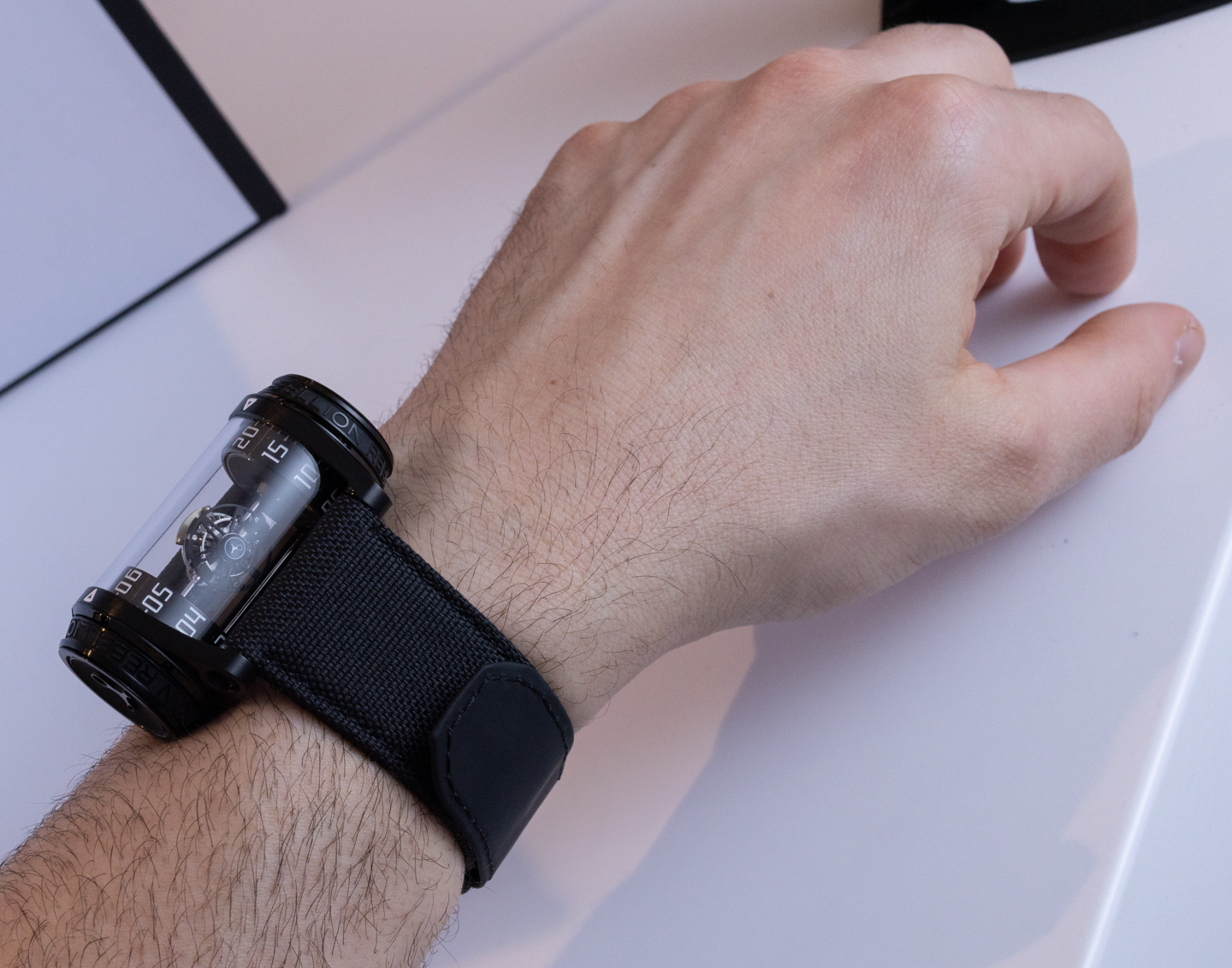 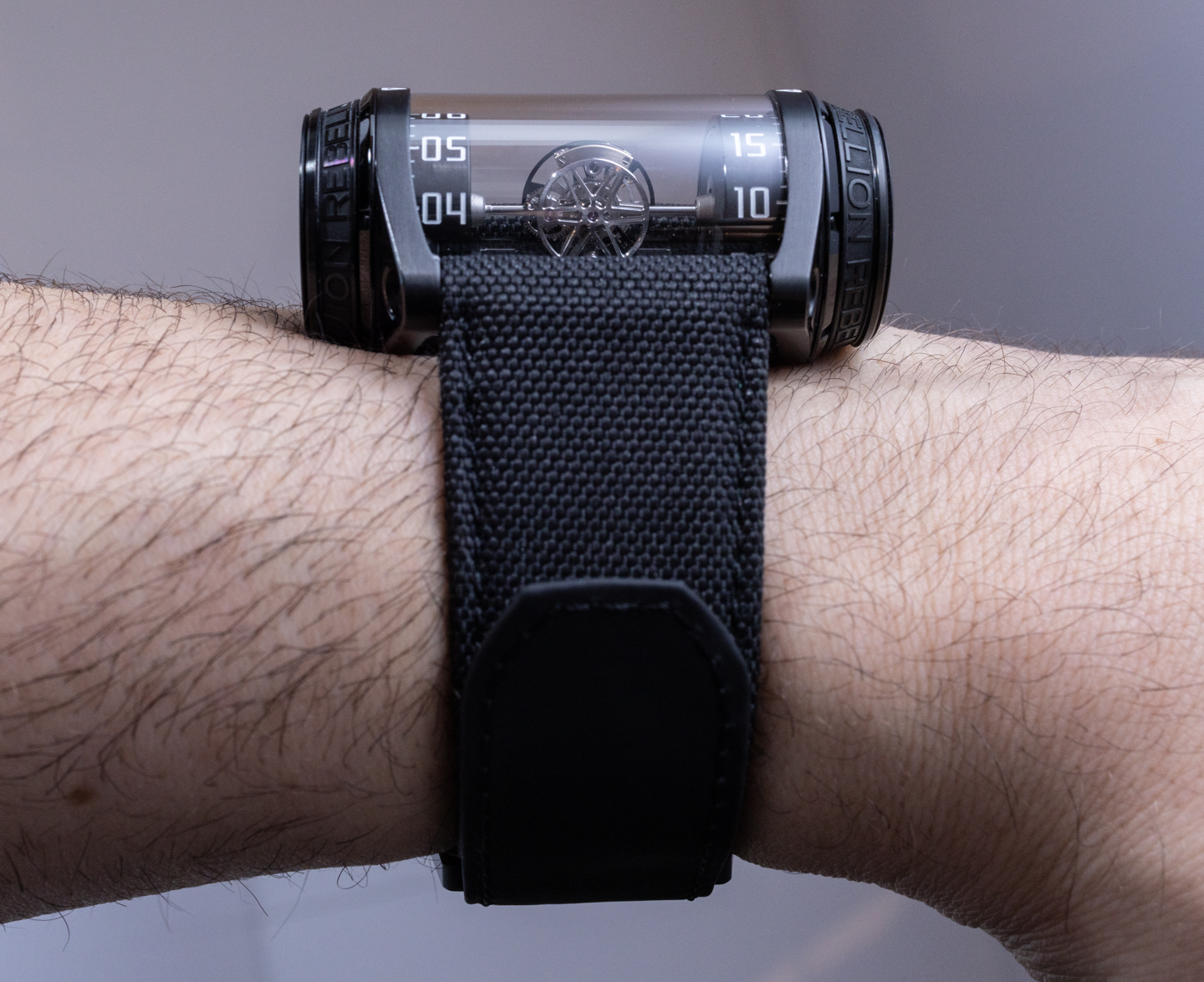 Attached to the case is a practical strap set on traditional lugs, which is sporty and produced from black textile with a Velcro-style closing buckle in matching black titanium. I do feel that if you wore this watch, you might like a brighter-colored strap on it at times. The original Rebellion WEAP-ONE watch is more the design icon, with its exotic detachable case system and more elegant overall design, though it is much more expensive and markedly less practical to wear on the wrist.

There is no shortage of ways to poke fun at futuristic-looking luxury mechanical watches like the WEAP-ONE Biaxial Tourbillon. The strange case, video game graphics, and high price point are things pundits can jump all over. That’s fine, but it isn’t uncommon in this space. What makes me happy is to see new ideas, interesting and thought-provoking designs, and totally wacky stuff that belongs more in films than in real life. Watches are supposed to be a sort of quasi-costume we can wear that helps us manifest a very personal (even if it is strange) notion about who we want to be while wearing them. Wear this WEAP-ONE Biaxial tourbillon, and you can be that sci-fi hero, supervillain, or contemporary super-industrialist that you may see yourself as.  You just need to afford the cost of entry… Each of these Rebellion WEAP-ONE Biaxial Flying Tourbillon watches is limited to 10 pieces and the price for each is 210,000 Swiss Francs. Learn more at the Rebellion watches website here.