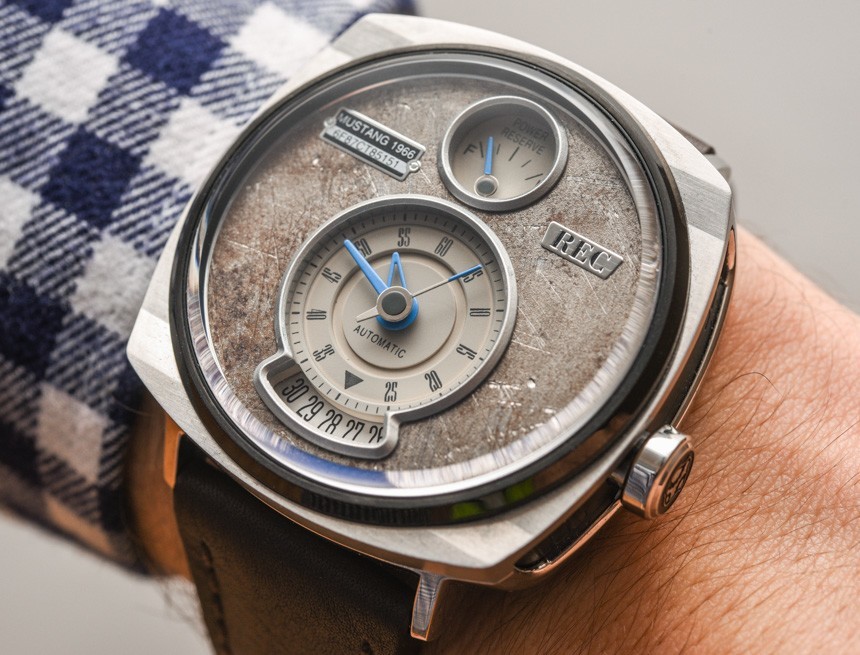 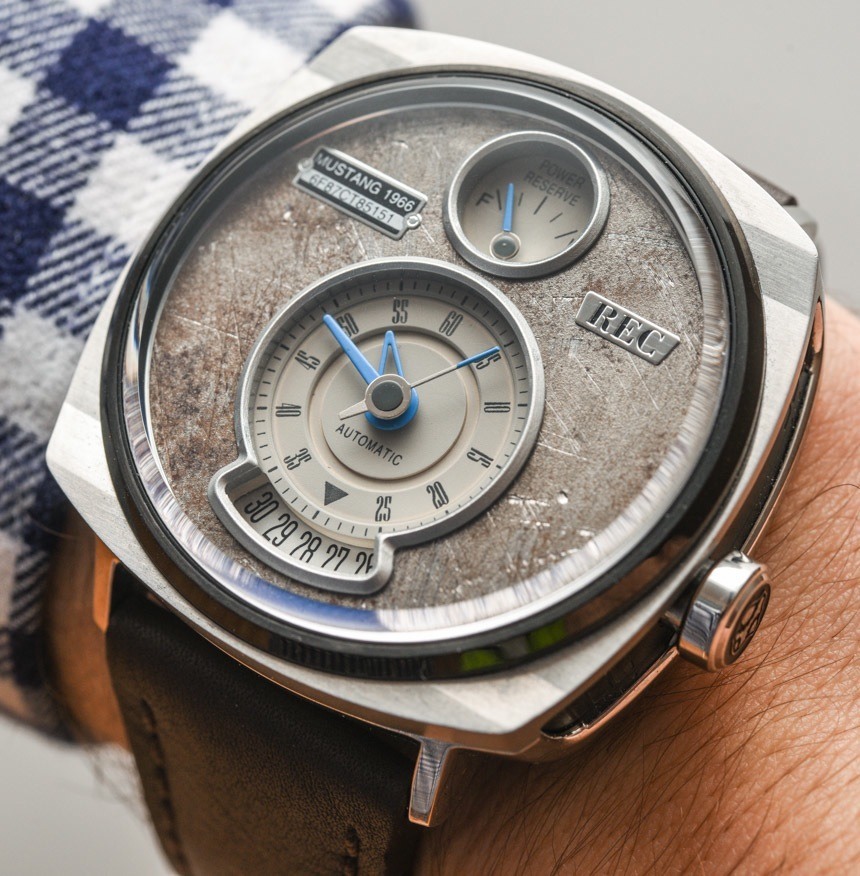 Legibility is relatively good given that the hands under the AR coated, raised sapphire crystal are easy to tell apart thanks to their noticeably different lengths and shapes – and, on some models, different colors. Still, the sub-dial for the hours, minutes, and central seconds is rather small and, at first sight, it seems a bit weird to be looking at such a substantially sized watch that serves such a small time display. This is not not to imply that REC was the first to create such a dial layout, but rather to say that the proportions and the overall layout falls into place only after some time spent wearing the watch. The large date window is subjected to repeated criticism from watch enthusiasts, but with the large, contrasting triangle pointing towards the middle among the large date numerals, the date also remains easily legible. 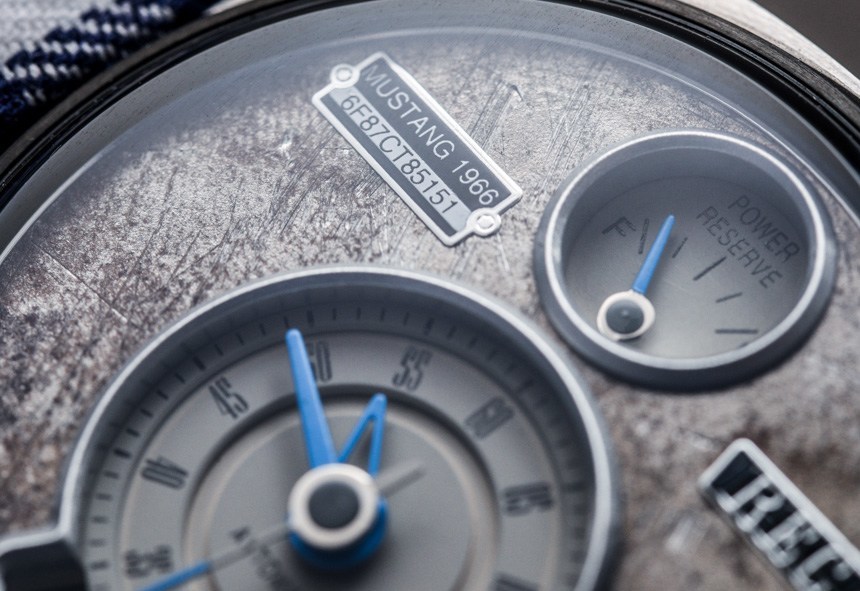 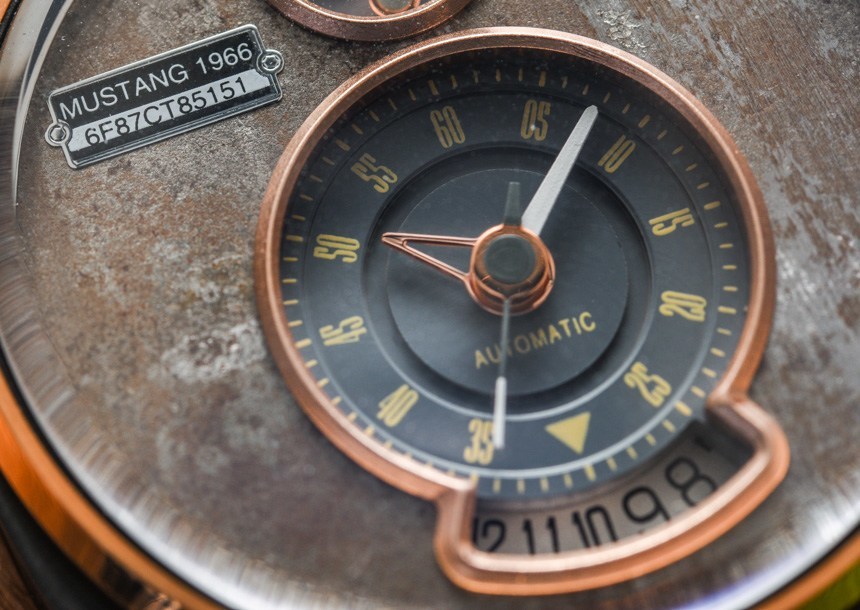 Some design elements that I do appreciate are the numerals and hands that closely resemble those found on the dashboard of vintage Ford Mustangs – certainly a nice touch and one that brings this piece closer to paying a noteworthy tribute to these mighty cars. The power reserve indicator at 12 o’clock on the dial has been my favorite part, though, with its mimicking the fuel gauge in a car, going from Empty to Full as you wind the movement. We have seen this before, notably on Chopard’s Mille Miglia watches, for example, but it is a nice touch nevertheless. I do wish the hand would stop at the F sign and not go beyond that point, though – a little detail that would require a bit more attention. 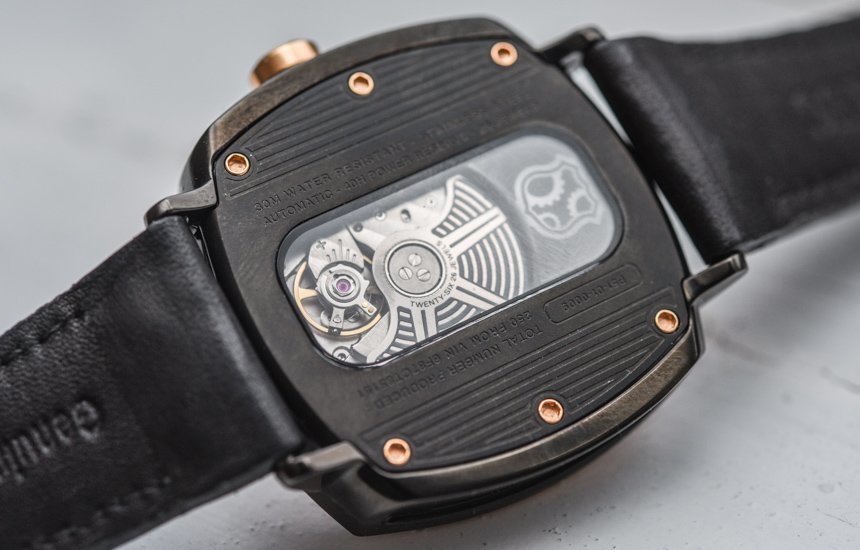 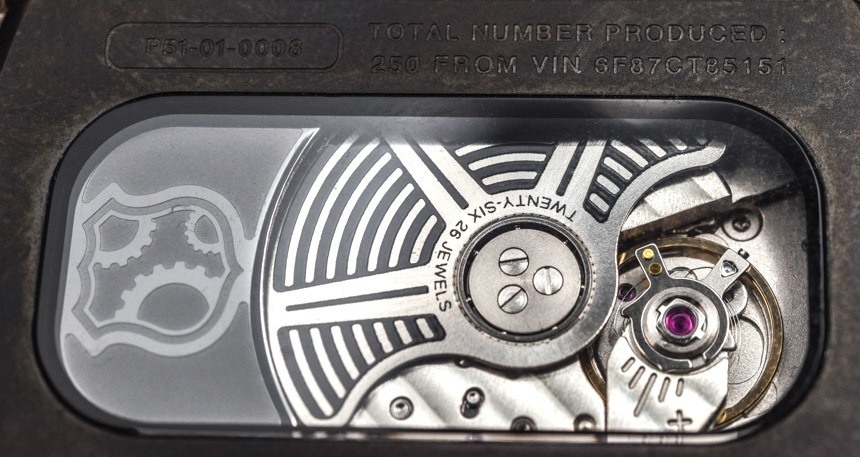 The movement that powers the REC P-51 Mustang watch is the Miyota 9130, a workhorse of a movement with a neat-looking rotor printed to look like a car’s alloy and some basic striped decoration underneath. Nothing to write home about, but it does deliver about two days of power reserve, operates at 4 Hertz, and features hacking seconds and hand-winding – functions not found in cheaper mechanical movements. The case back is secured by six Allen head screws and has an oval shaped window to display the movement and the REC P-51 logo above it. With no crazy winding rotor movements, silent and relatively accurate operation basically describes the 9130, a fair match for the price point. 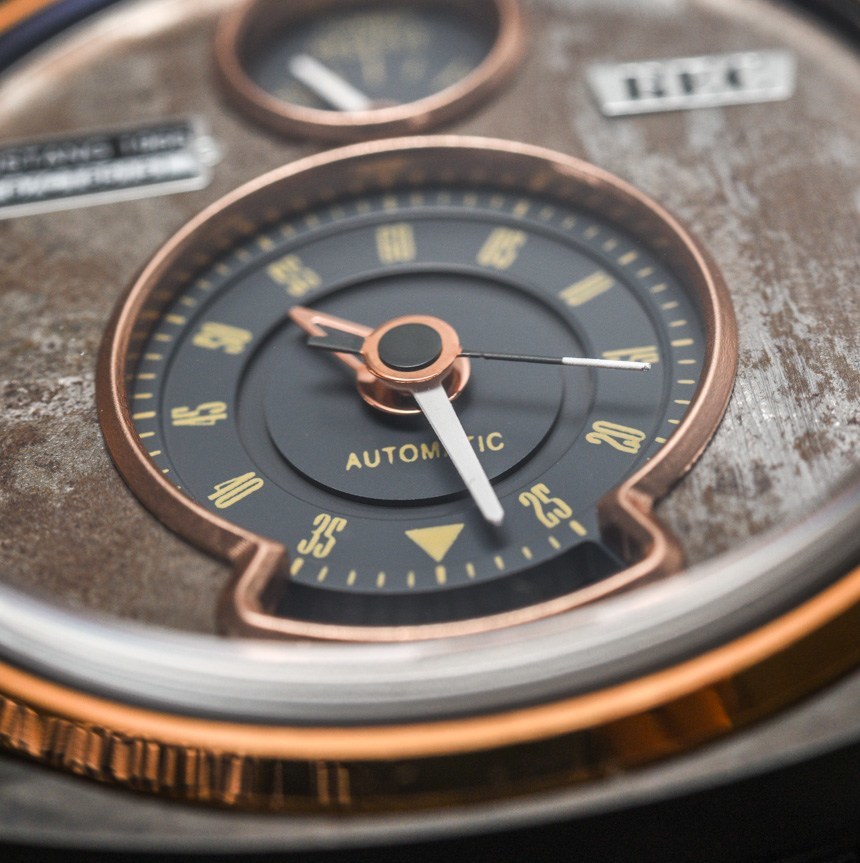 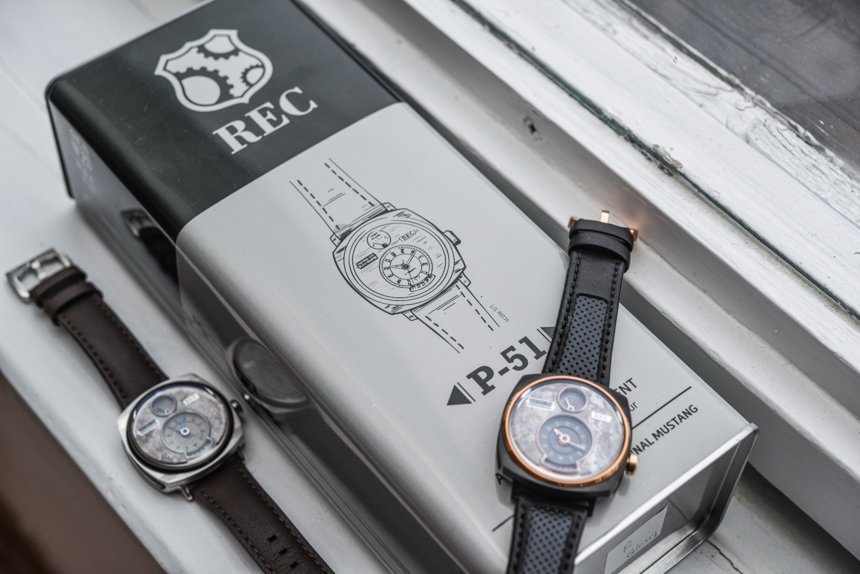 Packaging accompanying the watch was an unexpectedly nice element, with a large metal case reminiscent of ones sold with whiskey – some incentive not to shove the case on top of a bookshelf but feature it at some prominent location in your home or office. 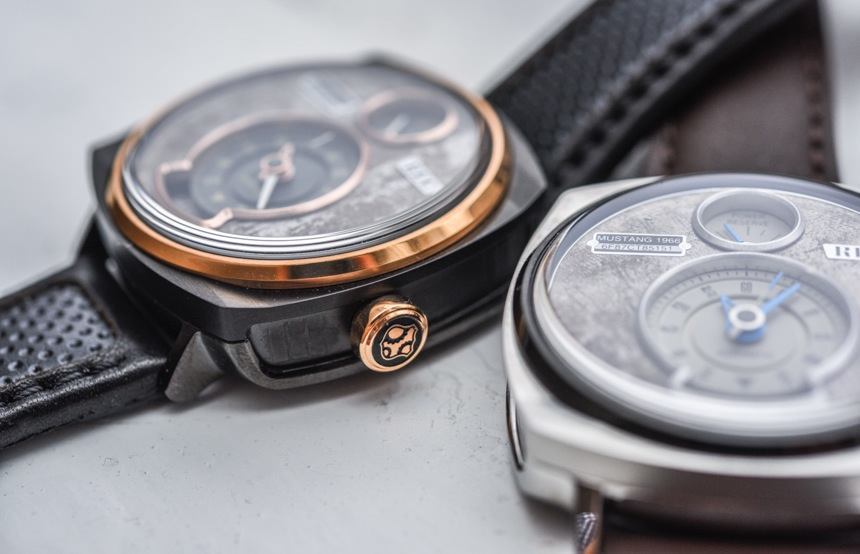 Some points of negative criticism would include the small and smooth crown that is a bit difficult to grab, unscrewm, and operate, as well as the lack of lume on the hands and sub-dials. While the overall design and concept of the watch does not necessitate the use of lume, it would have been nice to see the small hands and the Mustang-inspired numerals glow in the dark.

The name is a weird choice as well, as the “P-51” was indeed a Mustang, but not a car – it was a fighter plane flown during World War II. I would suspect legal/licensing reasons that REC probably couldn’t call their watch simply a Mustang named after the car even though they used parts from it – but could go with the Mustang name if they added the P-51 part. 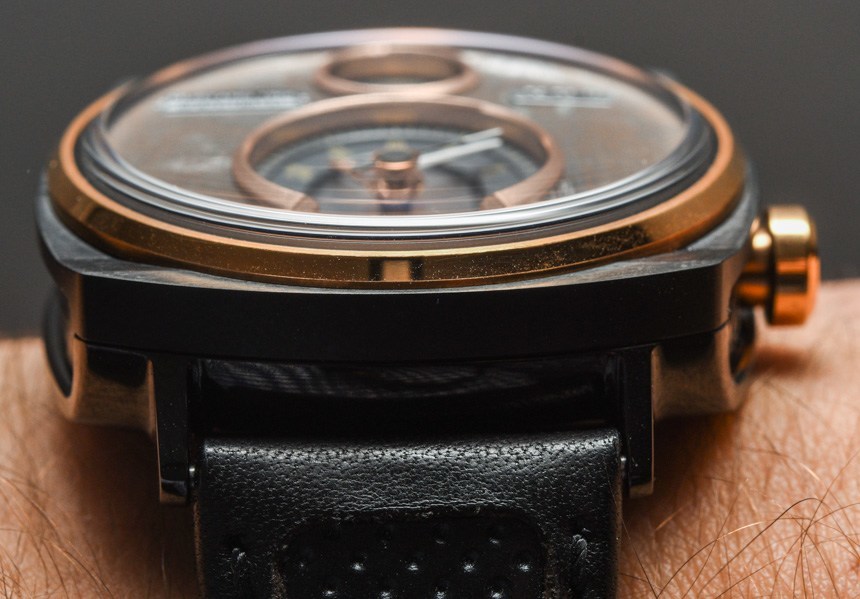 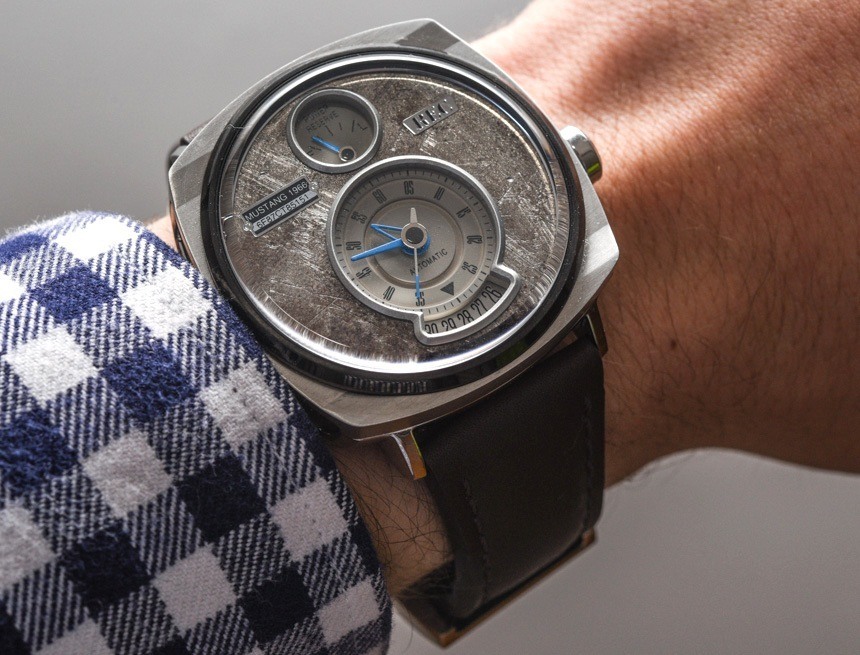 The REC P-51 Mustang is available through the already funded Kickstarter campaign for another week or so after the date of publishing this review for a price of $895 – retail price will afterwards jump to $1,490. At a little below $900, the price is up there, and you do have the option to go with a wide range of tried and proven Swiss brands for that amount; however, if you are in the market for something that is a bit more interesting and more of a talking piece than the majority of other timepieces in this price segment, the REC P-51 races for your attention with solid build quality, bold design, and a good story to go with it. recwatches.com

Necessary Data
>Brand: REC
>Model: P-51 Mustang
>Price: $895 on Kickstarter, will be $1,490
>Size: 44mm x 44mm
>Would reviewer personally wear it: Yes
>Friend we’d recommend it to first: Anyone looking for a cool fashion-watch alternative that is more interesting than most in this price segment.
>Best characteristic of watch: Large, easy-to-appreciate chunk of the “story” visible on the dial; cool idea and execution.
>Worst characteristic of watch: Large and bold which may turn some away.