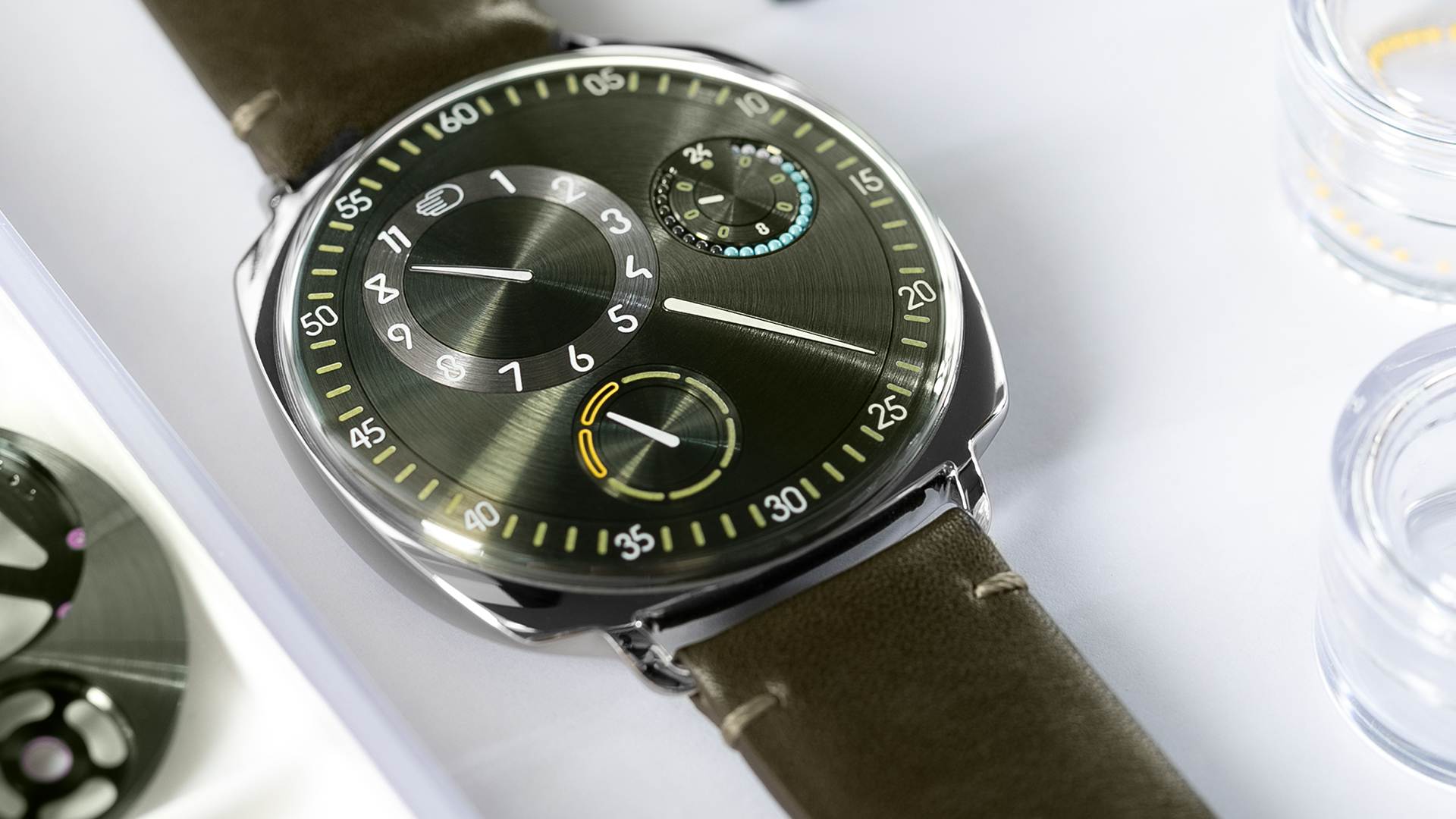 In a world dominated by perfectly accurate and constantly adjusted clocks in smartphones and computers, the functional role of the mechanical watch has shifted somewhat. No longer the pinnacle of precision, the niche a traditional mechanical wristwatch fills nowadays is more emotional and personally expressive, but also focused more on ease and convenience. With a constant display of the time available with just a flick of the wrist rather than pulling out and activating a phone, for example, the mechanical watch still has an efficient and useful role in everyday life. While most brands try to tacitly avoid that this paradigm shift has ever really happened, Ressence has made this idea the focus of its latest limited edition release that emphasizes the ease, comfort and aesthetic experience of telling time over the pursuit of ultimate accuracy. The last of the brand’s 10th anniversary celebration models, the limited edition Ressence Type 1 Squared X adds a unique color coded new complication to its signature orbiting dial concept. 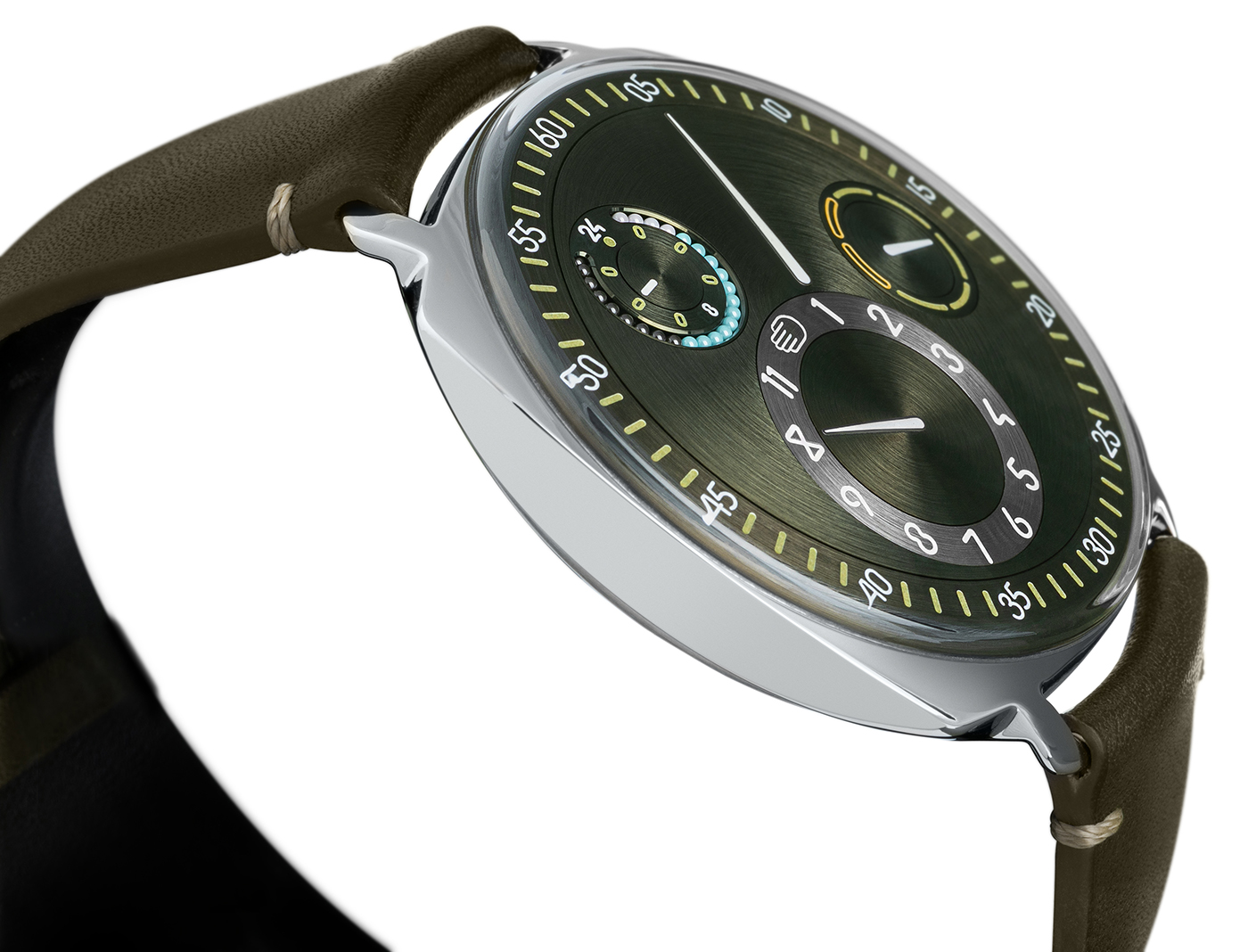 While the 41mm cushion case shape of the Ressence Type 1 Squared X is shared with the standard Type 1 Squared, Ressence abandons the stainless steel of the standard model here in favor of lightweight Grade 5 titanium. This is still Ressence’s dressiest, most wearable design at 11mm thick, but the use of titanium adds a darker, moody quality that creates a touch of visual dissonance with the bright mirror polishing throughout. Like the standard Type 1 Squared, there is no crown, with winding and time setting handled through a folding lever embedded in the caseback. While this leads to a cleaner, more symmetrical look, this caseback system may also be a structural weak point, as the case is rated for only 10 meters of water resistance. 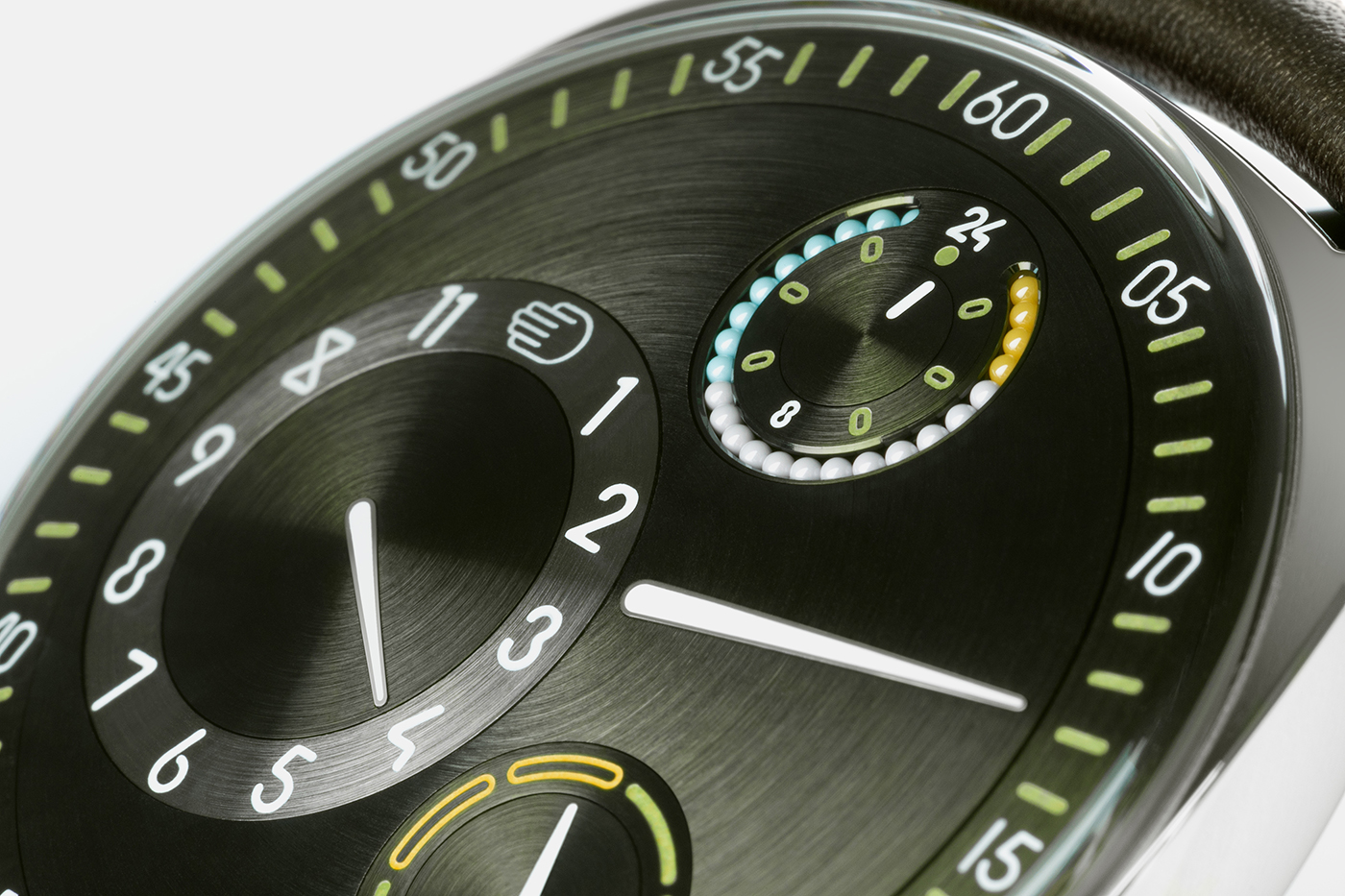 The orbital regulator dial concept used for the Ressence Type 1 Squared X should be mostly familiar to fans of the brand, with an independent minutes hand and subdials for hours, weekdays, and a 24 hour subdial all rotating in unison around the dial surrounded by a fixed outer minutes scale. In this case, the convex dial surface is radially brushed German silver coated in a deep olive green, with accents of yellow sprinkled among the white hands and printed indices. The most colorful addition to the dial, however, is the Type 1 Squared X’s signature feature. Surrounding the 24 hour subdial is a recessed track with 48 miniscule ceramic balls in sunny yellow, light gray, sky blue, and deep black. Developed in conjunction with a professor of neuroscience at Harvard, this array of tiny balls gradually cycles throughout the course of the day with no more than three colors ever present, to give wearers an instant sense of the general part of the day at a glance. Each of the four colors is assigned to a six hour segment of the day, with yellow representing morning, gray standing in for afternoon, blue for evening, and black for night. For example, at 12:00 noon, the track would be filled with an even mix of yellow morning balls and gray afternoon balls, while 3:00 PM would bring a full array of gray afternoon balls flanked on either side by a few yellow balls for morning and blue ones to signify the approaching evening. It’s far from a precise tool for timekeeping, but at a quick glance it looks in images to give wearers an intuitive sense of the day’s progression while allowing for more precise time readings through the other subdials. The other special visual hallmark here shows itself in the hours subdial, with the special hourglass inspired Roman numeral 10 in the midst of the printed Arabic numerals to celebrate the brand’s 10th anniversary. 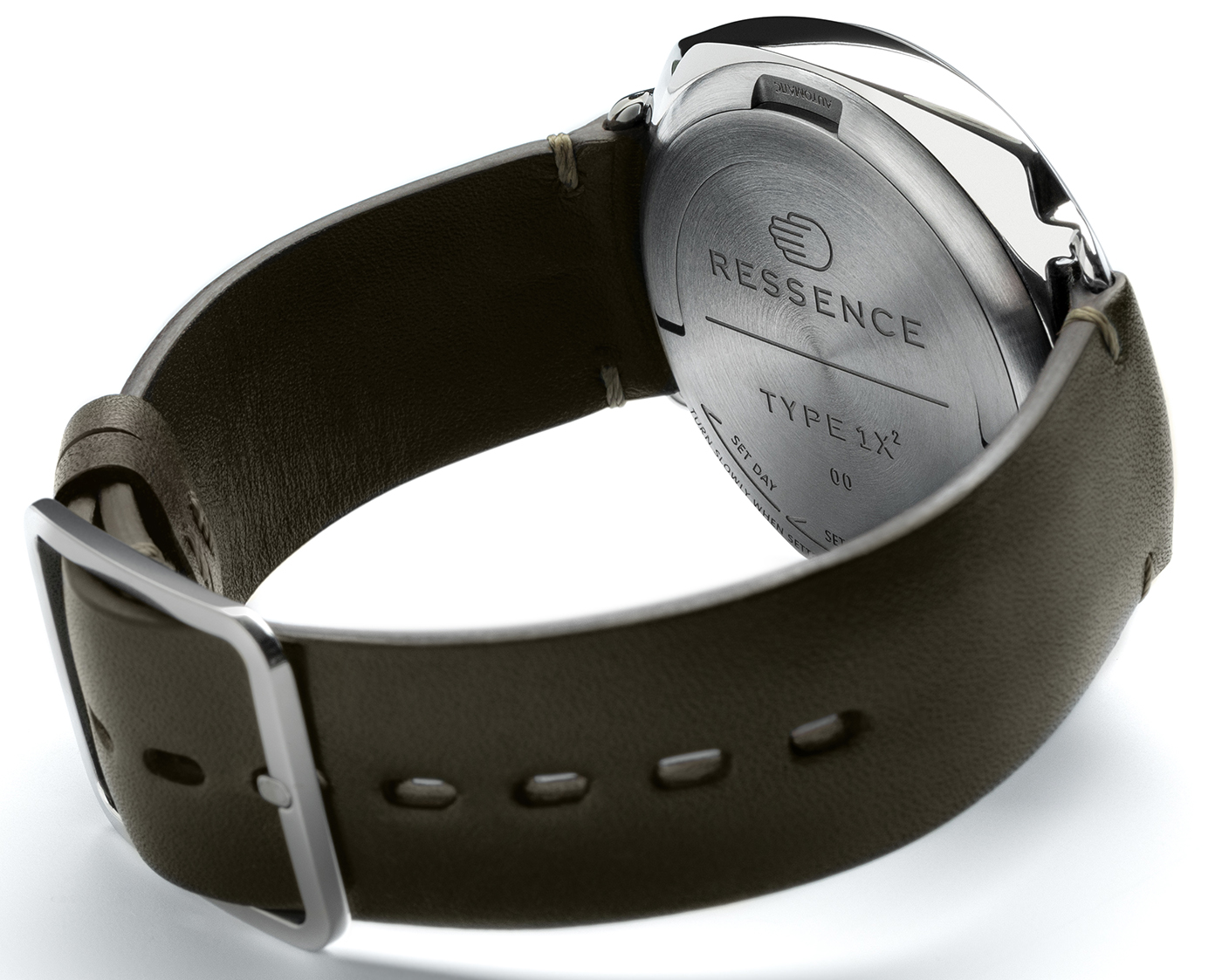 Ressence powers the Type 1 Squared X with the ETA 2892-A based ROCS 1 automatic movement. Beyond the extensive modifications to bring the patented Ressence Orbital Convex System to the base movement, as well as the repositioning of the crown, the ROCS 1 maintains similar performance to the standard ETA movement. In fact, due to the torque demands of the large planetary rotating assembly, power reserve is slightly reduced to 36 hours at 28,800 bph. 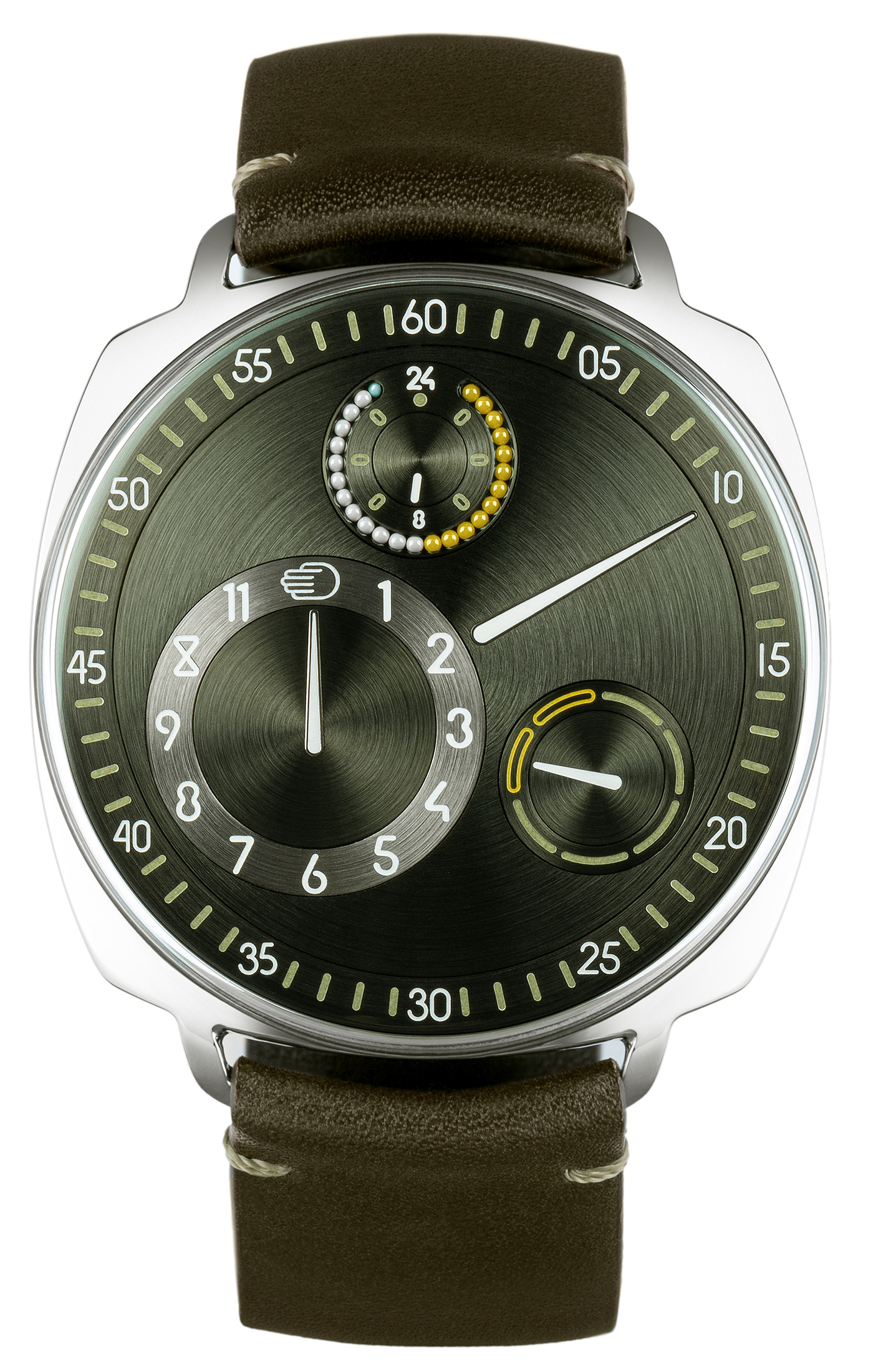 Ressence pairs the Type 1 Squared X with a minimalist calf leather strap in dial matching olive green. This elemental combination looks in initial images to harmonize well with both the dial and the darker titanium of the case, without drawing undue attention away from the watch itself. 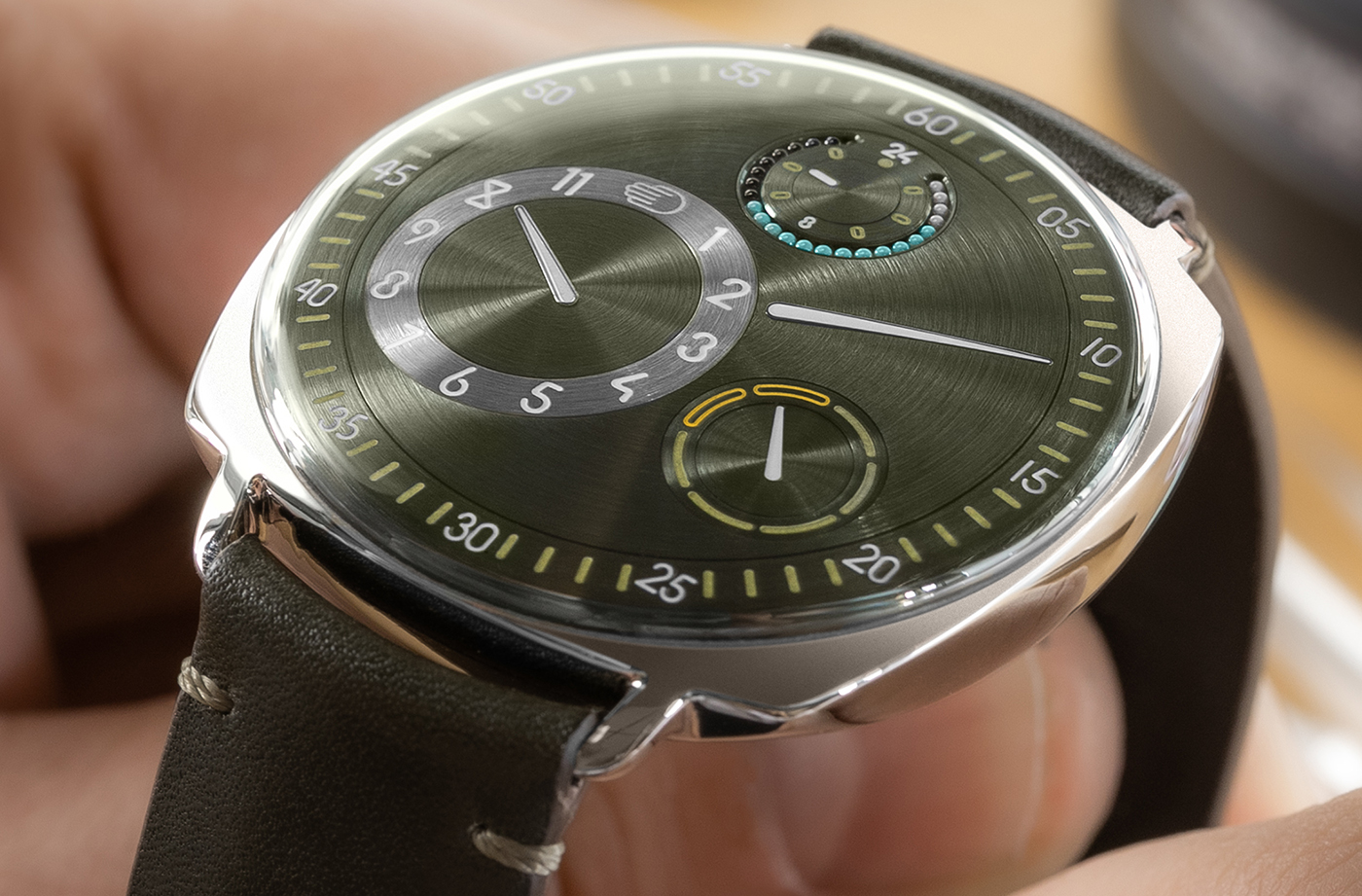 By focusing more on the ease and emotional experience of mechanical timekeeping rather than pursuing accuracy, the Ressence Type 1 Squared X delivers a unique, contemplative take on the brand’s own signature cues. Only 40 examples of the limited edition Ressence Type 1 Squared X will be made, available now through authorized dealers at an MSRP of $23,500. For more details, please visit the brand’s website.