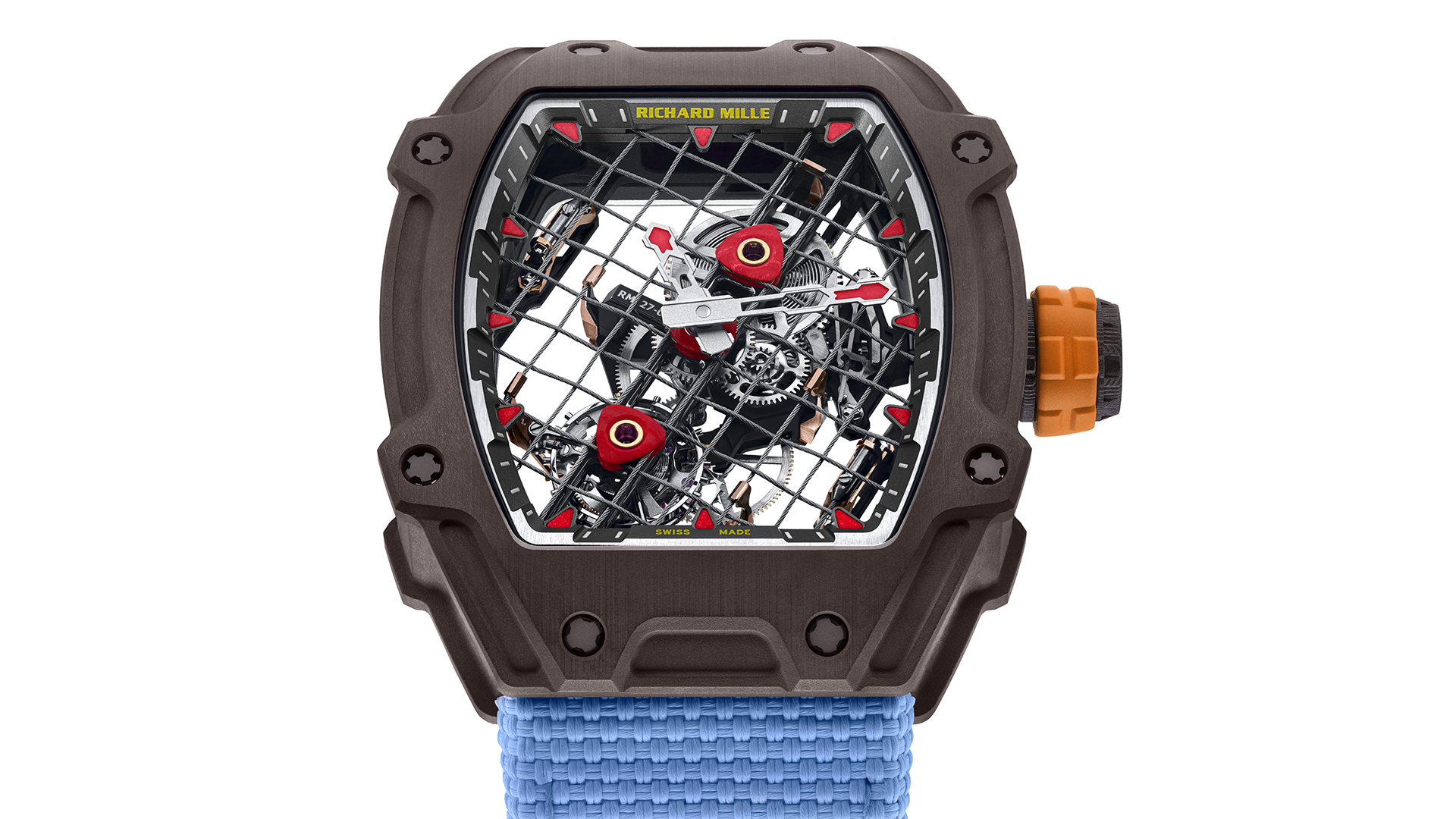 While sporting partnerships of all kinds abound in the modern luxury watch industry, many of the highest-profile sponsor relationships nowadays come through the world of tennis. Brands from Rolex to Seiko have established connections with tennis stars, but one of the longest running and most prestigious partnerships in the sport is between Richard Mille and Spanish ace Rafael Nadal. 2020 marks the 10th anniversary of this sponsorship, and to celebrate Richard Mille has released a new iteration of its RM 27 series with a new carbon-titanium case material, revolutionary woven cable skeleton dial, and an extraordinarily shock resistant tourbillon. The limited edition Richard Mille RM 27-04 Tourbillon Rafael Nadal combines aggressive, polarizing design with a handful of dramatic technical innovations for a tribute to one of tennis’ greatest modern champions. 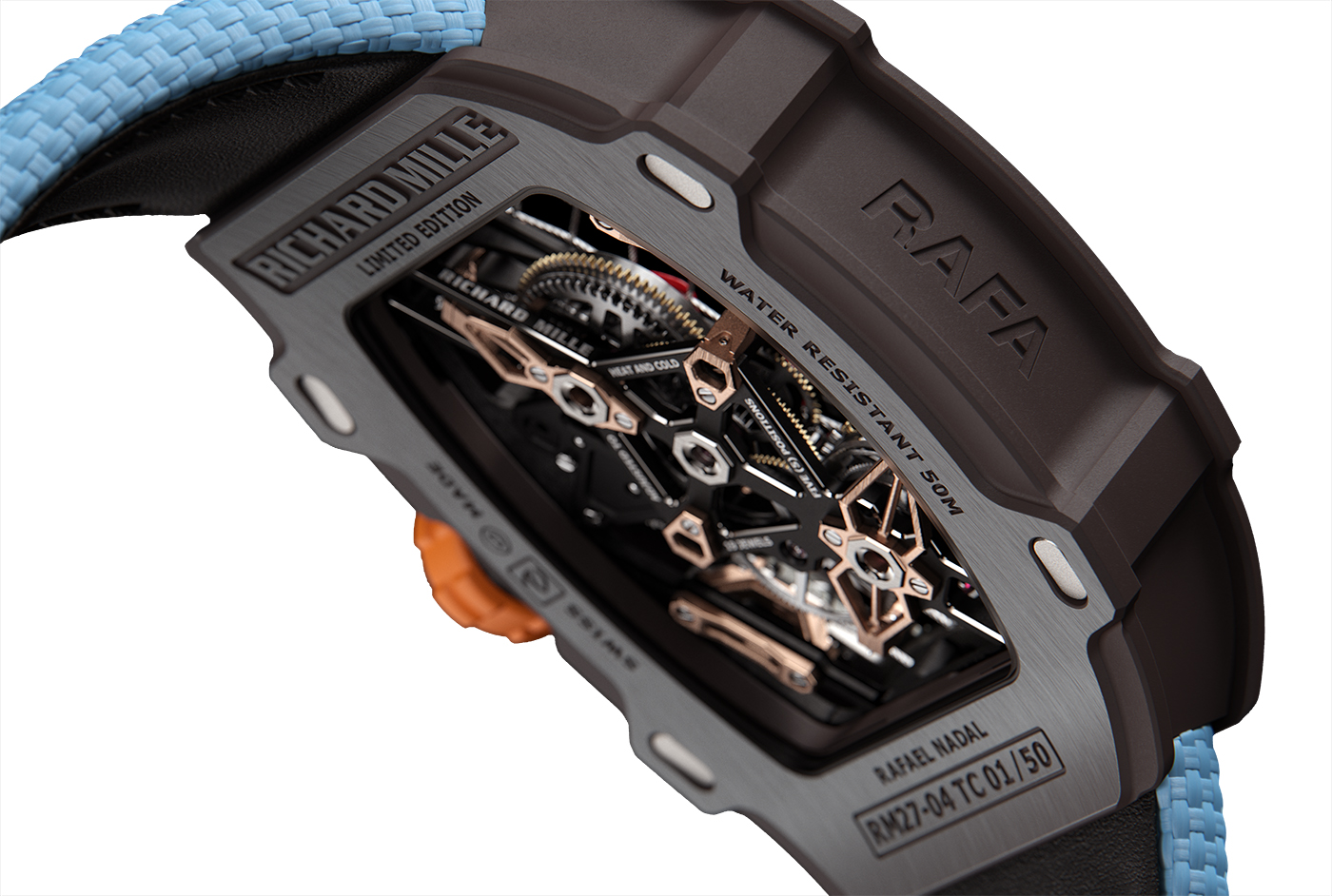 While the 38.4mm by 47.25mm case of the Richard Mille RM 27-04 Tourbillon Rafael Nadal follows the brand’s signature tonneau design, the material is an all new proprietary composite. Dubbed TitaCarb by Richard Mille, this polyamide contains 38.5 percent carbon fiber, and offers fracture resistance nearly identical to stainless steel in addition to massive tensile strength. Developed with the rigors of professional tennis in mind, TitaCarb is also incredibly lightweight, allowing for an overall weight of just 30 grams including the strap. In press images, the material gives off a muted, almost dusty brown tone reminiscent of milk chocolate, which could prove to be controversial. The case also provides 50 meters of water resistance, along with a sapphire display caseback. 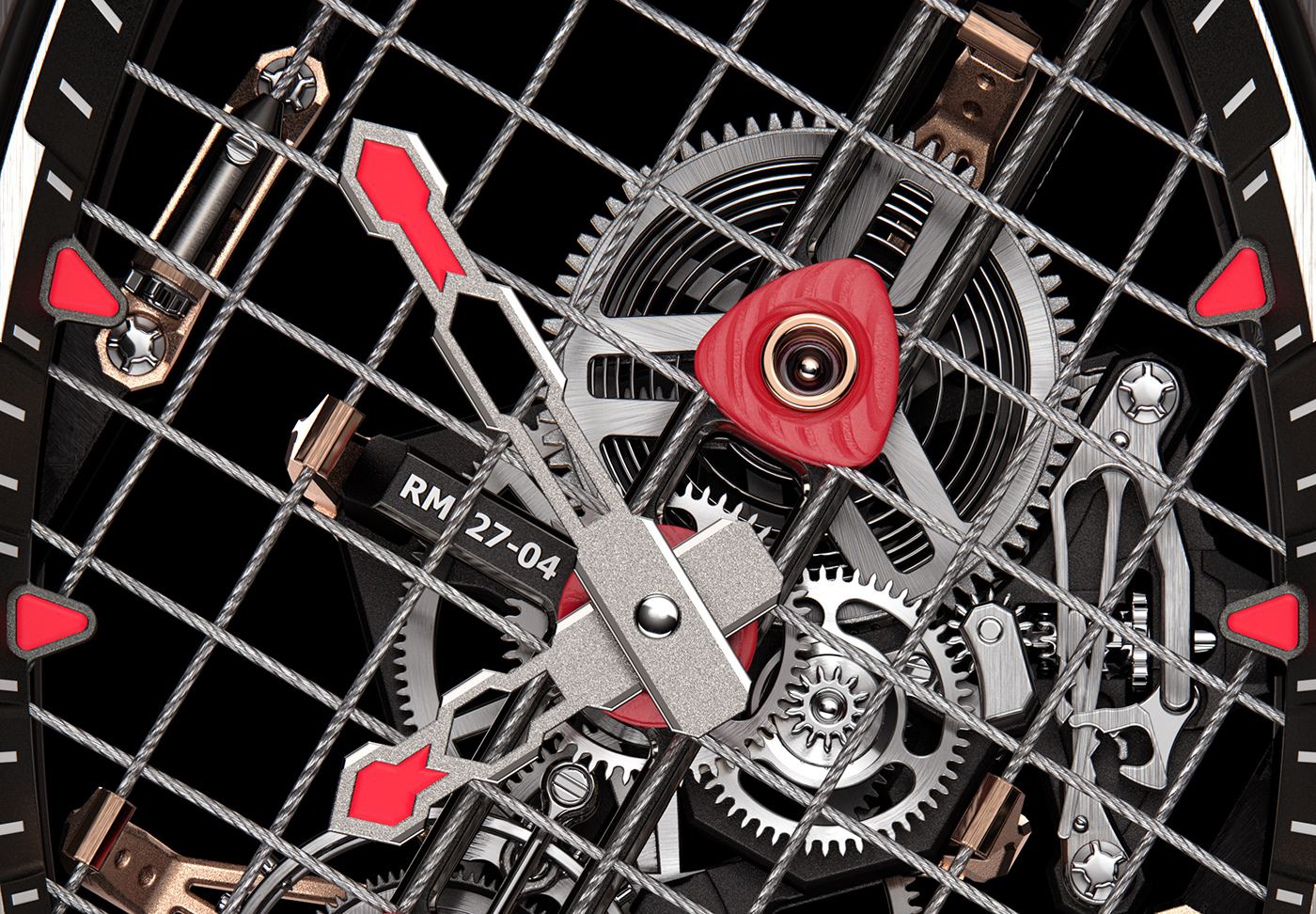 It’s rare that in a skeletonized tourbillon watch the tourbillon does not take clear center stage on the dial, but for the Richard Mille RM 27-04 Tourbillon Rafael Nadal there is another obvious visual standout. Driving home the tennis theme, the skeleton structure of the movement is held in place by a single 0.27mm steel cable, hand woven through the inner bezel in the exact same manner as a tennis racket. Far from being a simple visual callback to the sport, this woven cable is an actual structural element of the movement, and despite the delicate appearance the brand claims the suspended movement can withstand impacts of over 12,000 Gs – perfect for the shock-intensive environment of the tennis court. As a design element, however, the woven cable look is likely to be divisive. Outside of the woven cable, the rest of the skeleton dial design is rather standard for Richard Mille, with angular, stylized skeleton arrow hands complemented by small triangular lumed indices integrated into the rehaut. 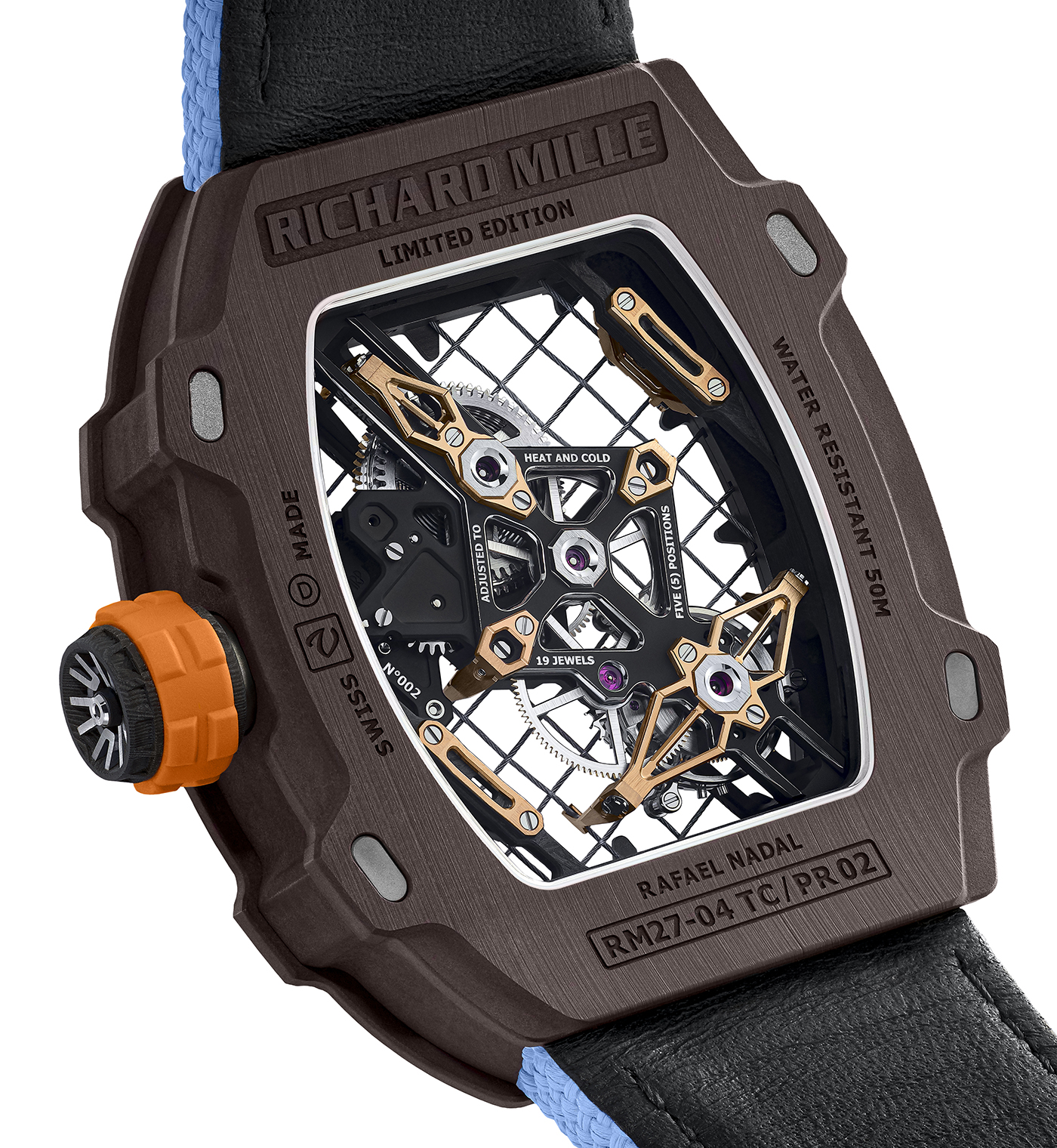 Suspended beneath the woven cable is the manufacture Caliber RM 27-04 handwound tourbillon movement. The baseplate and bridges are made from a blacked-out titanium alloy, and the prominent mainspring barrel at 1 o’clock rotates once every six hours rather than the more common seven and a half hour cycle for improved performance. The tourbillon visually counterbalances this barrel at 7 o’clock, with the mesh and severely skeletonized bridges allowing for a nearly unimpeded view of this complex escapement in action. Beyond the phenomenal shock resistance, performance is decidedly average, with a 38 hour power reserve at a 21,600 bph beat rate. Richard Mille completes the RM 27-04 Tourbillon Rafael Nadal with a powder blue fabric strap lined with black leather. It’s an unorthodox combination with the brownish tones of the case, but the contrast is striking. 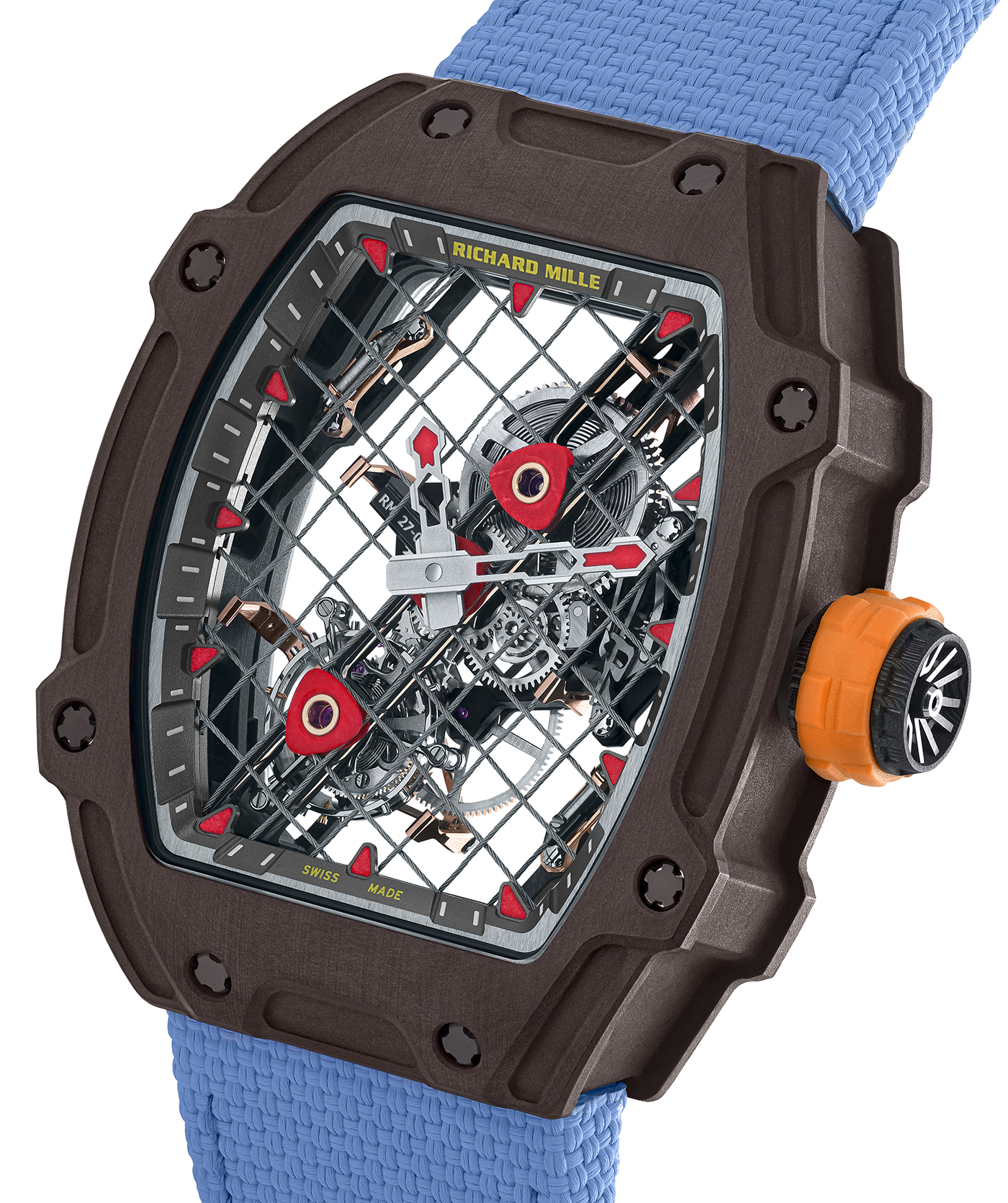 With the RM 27-04 Tourbillon Rafael Nadal, Richard Mille has brought equal parts technical innovation and distinctive design to forge a path forward for one of its most enduring sports partnerships. Only 50 examples of the limited edition Richard Mille RM 27-04 Tourbillon Rafael Nadal will be made, available now through authorized dealers at an MSRP of $1,050,000. For more details, please visit the brand’s website.