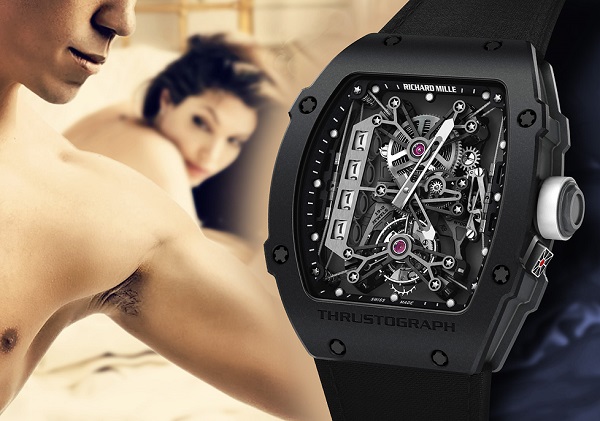 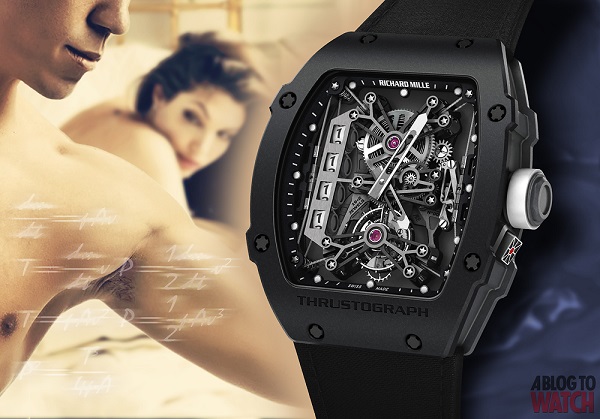 While sport lovers felt it was interesting and perhaps a bit strange for tennis champion Rafael Nadal to wear a half million dollar plus watch while competing, it was all about an assertion of brand values for Richard Mille. Be it tennis, golf, automotive racing, flight, or diving, Richard Mille has proven that its timepieces not only have a place, but the durability and character required to be part of some of the world’s most demanding activities. The Rafael Nadal watch for example wasn’t just about a luxurious object placed on the wrist of a famous athlete, it was a luxurious object that could keep up with his game.

The success of the Nadal watch prompted Richard Mille to investigate deeper, pouring money into research in an attempt to find a watch that not only would survive the rigors of one’s active life, but also help to improve it. The next step was the release of the limited edition RM036 G-Sensor watch that included a mechanical g-force meter. The idea was for drivers and pilots to measure the amount of g-forces they just endured. Though in the end it was realized that the RM036 was a mere toy, destined to a niche audience as suggested by its limited edition production. Richard Mille himself continued to search for the ultimate rigorous activity that each man could enjoy, and whose performance he could help. He made it a personal mission.

What Richard Mille eventually discovered is that there was no socially created sport universal enough to appeal to every man. Why invest in the production of a half million dollar watch when only a few people are going to want it? The typical Swiss watch industry business model just didn’t sound appealing. Mille wanted a world of men who could benefit from what only the finest of Swiss minds could produce. The answer was closer than he thought; copulation! Ah yes, man’s greatest pastime and source of pride. No man is happier than after the release of a good love making marathon. But like all good hobbies there is a drive to improve one’s personal performance. But how? Richard Mille has a reputation for luxury and an active lifestyle, so how could the brand enter itself meaningfully in one of life’s most intimate realms?

Passion and performance finally coalesced when Richard Mille hit its breakthrough moment in the search for a watch that could not only survive, but improve one’s sex life. Building on the G-Force watch designed to measure the force one’s body endured while traveling, he would produce a watch that would allow a man to measure (and thus improve) his performance during each romantic encounter.

After extensive (and passionate) field research it was found that the measure of male performance wasn’t the length of a session or its component actions, but rather the quantitative measure of male pelvic thrusts. More thrusts not only meant the benefit of rigorous amounts of exercise, but careful observation seemed to determine that it also resulted in an increase of positive feedback from one’s partner. Unfortunately, men are natively poorly equipped to measure the volume of thrusts during such heated moments. Enter, the Richard Mille Thrustograph Tourbillon. 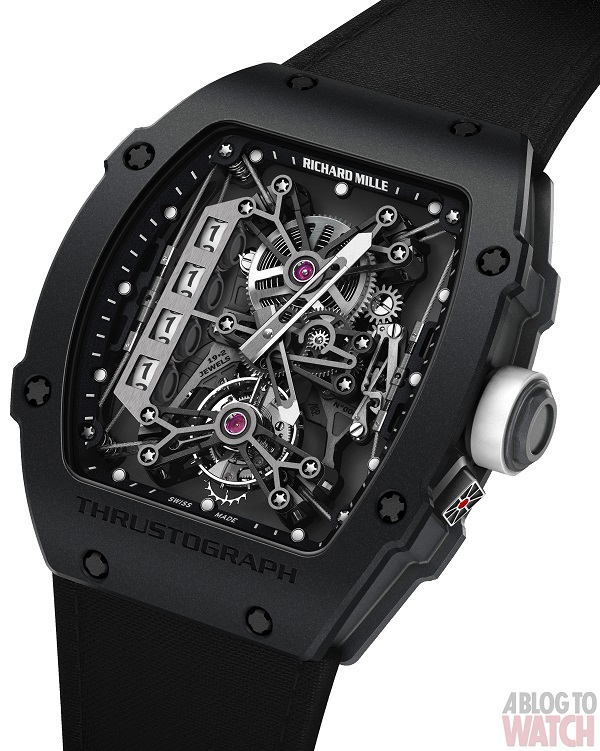 A call to Richard Mille’s good friend and longtime business associate Giulio Papi at the movement design and production company APRP began what was to be the formation of one of the most technically challenging mechanical timepieces in existence. That the Thrustograph was to contain a tourbillon was a given, but its principle complication – thrustograph – proved to be a technical quandary. The challenge was to produce a system to accurately measure pelvic thrusts, and not register too many false positives. Richard Mille admits the system is not perfect, but neither is the human body’s aim in all instances. A typical use scenario was as such. A man makes sure to first wear his Richard Mille all the time – as the moment of intercourse is never certain – then to (often discreetly) reset the thrustograph counter. After completion, a mere glance at the counter would indicate ones thrust count.

Each wearer would thus begin to develop a baseline thrust count for himself. From there he could choose to push himself further, harder, longer. Eventually besting his own record. The beauty of this passionate sport is that one need only compete with themselves. According to Richard Mille, in love making “we are all winners.”

The system works quite brilliantly. A particular combination of heart rate, skin moisture and temperature, and of course physical vibration was found to be a rather good indicator of each thrust. Small sensors on the back of the Thrustograph Tourbillon independently measure these signals and feed them to a mechanical digital counter on the dial. The system can measure up to 9,999 thrusts per reading. Richard Mille found that even with effort, the typical thrust count for most men was under 100. He nevertheless reminds us that it has been his policy to outfit some of the world’s finest performers with his watches – no matter what they excel at. One should also not discount the importance of aspirational performance. “I feel that getting high goals is important. We can never fully realize our potential until we push ourselves further than we thought possible.”

Where No Tourbillon Has Gone Before

Historically the tourbillon-based mechanical movement was a delicate mechanism; susceptible to jolts and shock. Richard Mille needed a high-end luxury movement durable enough for a man’s most demanding job. In the second iteration of the Richard Mille Rafael Nadal watch, the brand developed a unique tension cable system to support the movement. That same system is utilized in the Thrustograph Tourbillon. “For the wrist, sex is remarkably like tennis” remarks Mille. “You need to anticipate immediate shock, as well as constant movement, and sometimes falling on the floor. Both also involve coming into contact with balls.”

The final round of testing was not only to measure the efficacy of the thrustograph, but to ensure that the complicated, manually wound tourbillon movement wouldn’t suffer damage. Mille applauds the dedication of the R&D team at the brand. “I’ve never seen our people stay at work longer and or dedicate more hours to ensure a watch is perfect by the time it hits market.” A testament to the Swiss work ethic,  sometimes entire days would be dedicated to field testing the functionality as well as dependability of the Thrustograph Tourbillon. Additional and thorough evaluation made sense because the last thing a man should worry about during intercourse is damaging his timepiece. At the least it would distract from the goal at hand.

Contoured For Her Pleasure

One problem encountered during testing was female response to wearing a watch during intercourse, let alone looking at it after sex. However, making the watch comfortable for both parties proved less difficult than making it romantic. The ultra-light case of the Thrustograph is made from high-end materials and is 100% hypoallergenic. Like the Nadal watch, Richard Mille wants the Thrustograph to barely feel as though it is there. “We don’t want it to feel like a third wheel in the bedroom.” It is also carefully designed to have smooth edges and nothing that will catch on hair. Plus, “no cold metal here” says Mille. Even at room temperature, the timepiece does not feel chilly to the touch. “We like to think of it as an extension of one’s self.”

Romance aside, Richard Mille wants the partners of its customers to interpret the Thrustograph as something that can mutually benefit both parties. “Performance isn’t a selfish thing, it is about being the best man you can be and making your loved ones happy.” The logical next question is to ask what wearing a Thrustograph outside of the bedroom says about a man.

Men wear diving and pilot watches to suggest a particular form of active lifestyle to the people they greet. Wearing a Richard Mille Thrustograph says something entirely different. Will women who see a man wearing one of these be impressed or intimidated? Will it be sexy or geeky? Richard Mille’s response is more simple. “We’ve been making high-performance luxury watches at prices no one else can command for years now. I don’t need to point out that our collection has a modern flair, making use of the quality materials and showcasing the mechanical versus traditional virtues of a watch. Not everyone has to love what we make, but enough people respect it. And we’ve earned that by being true to our beliefs, producing watches that we want to wear, and offering a lifestyle symbol for men who demand what they feel is the best.” Smiling to himself he adds “and now we finally have a watch that doesn’t just suggest an active lifestyle, but also helps promote it.” At an industry attention grabbing price of $690,000. richardmille.com