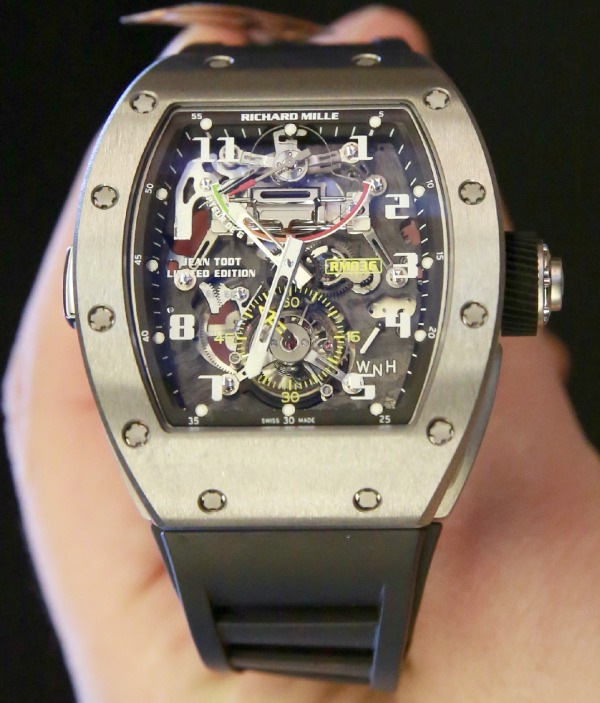 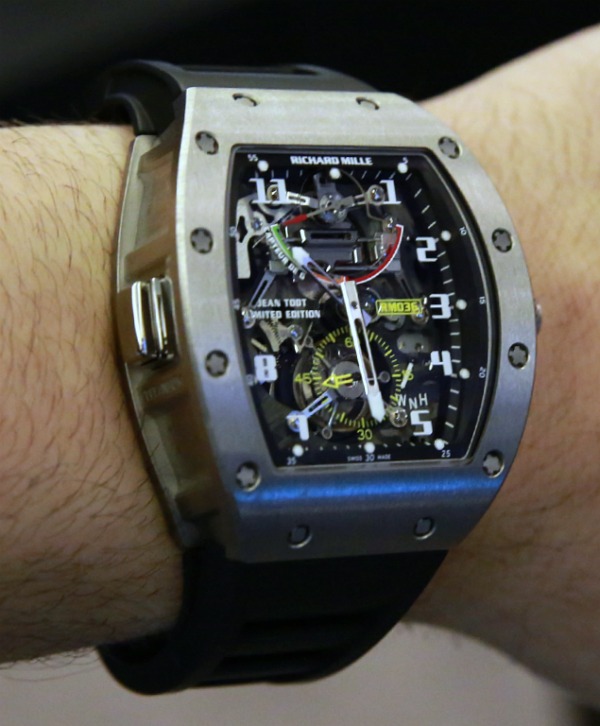 If you are a fan of Monty Python then you are a fan of comedy frequently derived from irony, and often from absurdity. Consider me such a fan, and I have a feeling that Mr. Mille falls into this same camp. At SIHH 2013 my enduring image of him is sitting in a chair and speaking energetically with his hands. “Absurdity” is the easiest way to explain the combination of features and the conception of the new Richard Mille RM036 “G-Sensor Tourbillon” watch.

In brief, the watch is a mechanical tourbillon-based timepiece with a g-force meter. On the one hand you have a rather fragile tourbillon escapement, and on the other hand you have a device designed to measure the force from velocity… typically used when you are planning on experiencing some rather high forces. These things simply don’t go together most of the time. 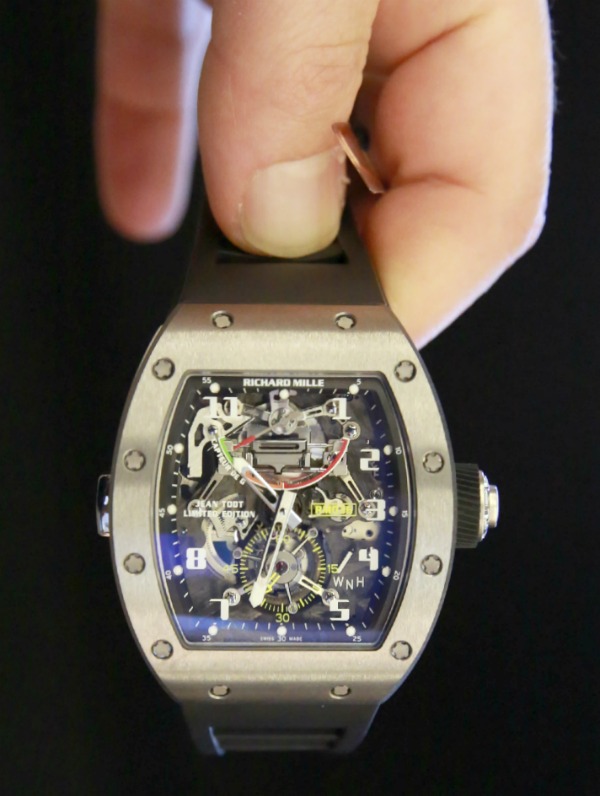 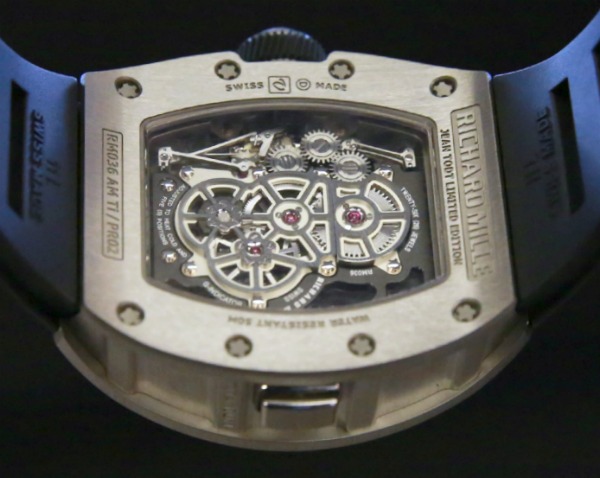 In truth the RM036 is a beauty on the wrist. I’ve never been a closeted fan of Mr. Mille’s spirited contraptions that are a result of an “I wonder if I can produce this mentality.” Richard Mille attempted to prove in the past that his tourbillon watches could withstand the types of forces that would destroy most tourbillon-based movements. How did he do that? By placing such watches on the wrists of race car drivers, tennis players, runners, and golfers. All to be worn in the heat of competition. So these athletes did, and the watch purportedly survived – but perhaps that wasn’t enough for Richard Mille to get his point across. In development for a few years, Richard Mille has just released a watch with a mechanical g-force meter. Cool. but what will I do with it? Well what I did do with it is test the g-force meter.

Holding the watch firmly in my hand, I tightened my fist and threw it to the side to see what would happen. Looking then at the watch dial I took notice of the g-force gauge on the top of the dial. The little hand which was once in the green was now in the red. All the way in the red. Looks like I just threw my wrist with enough force to kill a race car drive if his car was traveling at the same speed. I was impressed with myself. Unfortunately the gauge isn’t specific as to how much force the watch just experienced. I support you need to trust that anything “in the red zone” is dangerous. A press on the pusher on the side of the case resets the hand for more actions to see what else the watch can endure.

I have to be frank with you, if I am planning on putting myself in a centrifuge or anything else that will compress my innards I don’t plan on taking a tourbillon with me. It isn’t particularly necessary to enjoy the almost romantic allure of that spinning escapement while the force of many Gs is convincing my stomach it is placed too low in my body. Richard Mille is also likely aware of this fact, but has seemingly long since forgotten the notion that timepieces need to make much sense. In fact, the absolute frivolity of high-end watch design that market the mid 2000s is back with a vengeance. Only this time around it is much more limited in production and much more expensive. What used to be $200,000 in 2005 is $500,000 or more in 2013. But just a few pieces are all that is needed to get media and lots of excitement. Why does the RM036 exists? Because Richard Mille has the means, connections, and customers to make it so. 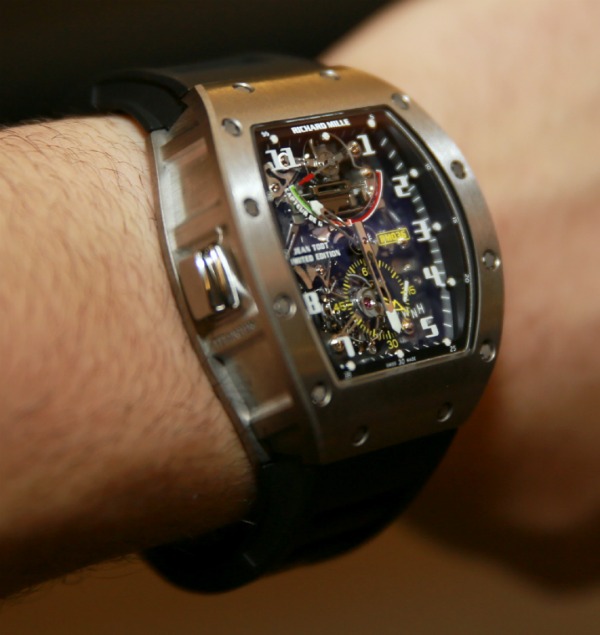 So why did they produce this watch? More or less for fast driving. The piece was made for Jean Todt, who is not actually a person who drives very fast (as far as I know). Todt is however involved with the world of motor sports in France and may be associated with the FIA Action for Road Safety. To be honest, the details from Richard Mille on the official purpose of the watch are scant and vague. Todt is a friend of Mille and perhaps the two thought the watch would be a fun idea. The brand refers to it as a timepiece designed to assist with road safety. The idea being that your watch tells you if you are accelerating too fast (and then what? You are going to slow down because your watch willed it?). Pretty sure our own bodies have ways of telling us that. Nevertheless, 15 of these watches will be made for you know… the safety of drivers, and their tourbillons.

Many Richard Mille watches are birthed at the Renaud & Papi headquarters. The watch movement designers there were tasked with coming up with a sufficiently small, sufficiently mechanical g-force meter to place inside of the watch. While this is the most interesting feature of the watch, it is one that Richard Mille explains the least. The RM036 has a gauge that looks a bit like a power reserve indicator on the dial that shows the maximum Gs experienced. A pusher at 9 o’clock resets the “G-Sensor” hand. So after driving really fast you can look at your wrist and giggle as you check out how close to the red zone you got. Unfortunately, the G-Sensor meter lacks any numerical values. So you’ll simply have to take safety cues from the colors. 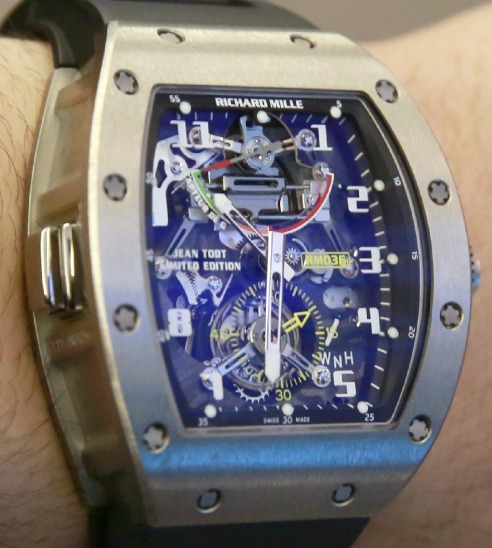 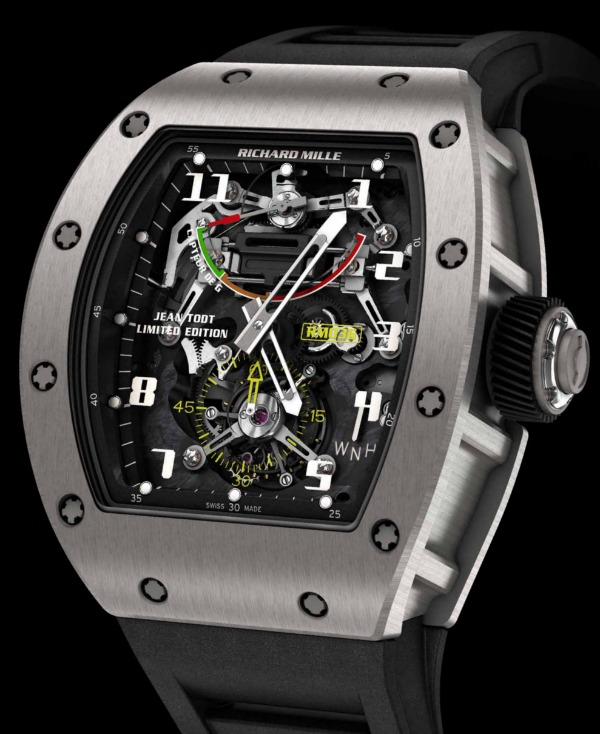 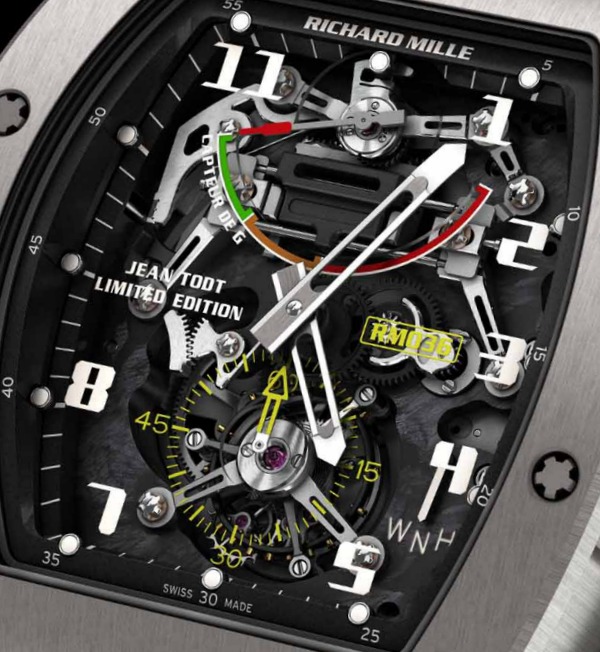 The RM036 Jean Todt G-Sensor watch comes in a 42.70mm wide titanium case with rubber strap. It is actually very light and supremely comfortable. If you are a fan of Richard Mille designs, then the watch is pure lust. The movement is manually wound and rather than pull out the crown, a pusher in the crown acts as a function selector (wind, set time, or neutral). With about 70 hours of power reserve, the movement has the time with a tourbillon that acts as the seconds indicator. There of course is also the matter of the G-Sensor which is a 17mm wide module that sits at the top of the movement.