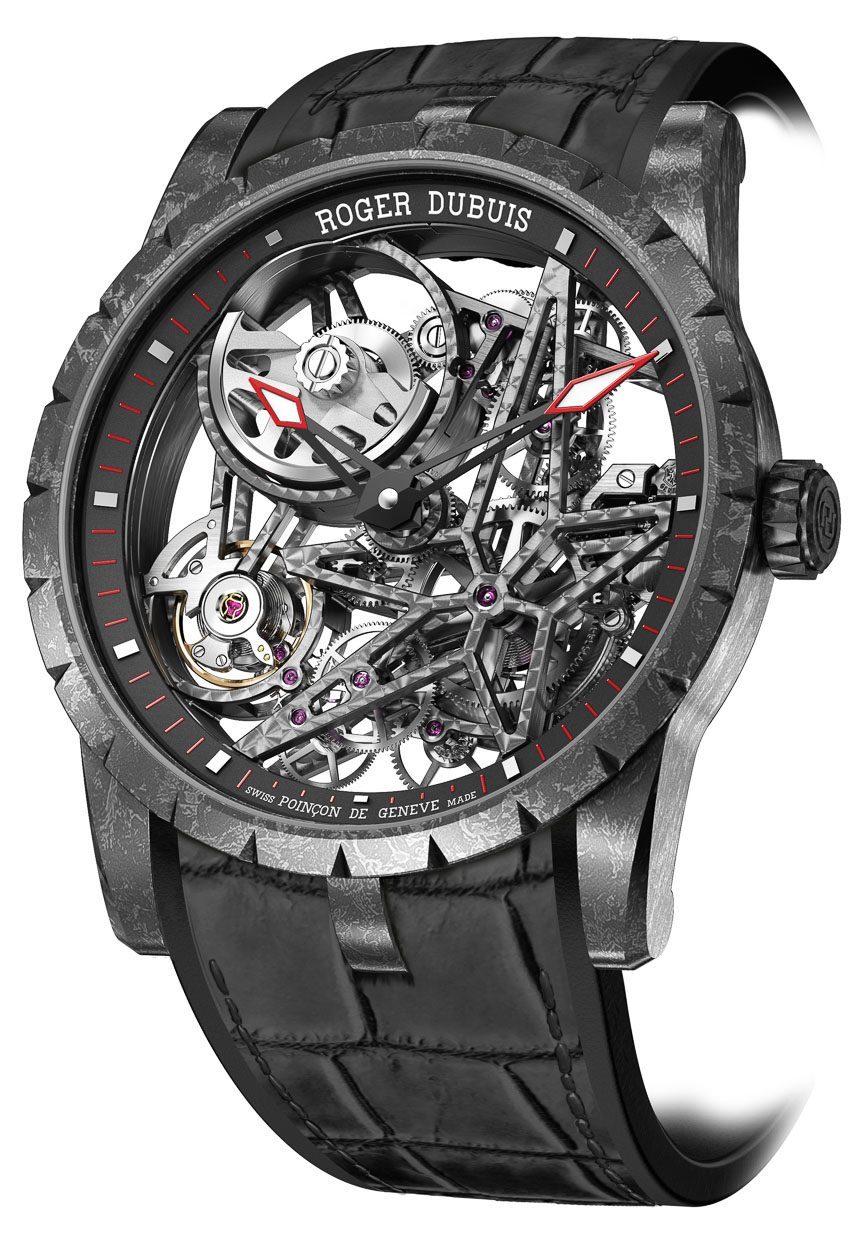 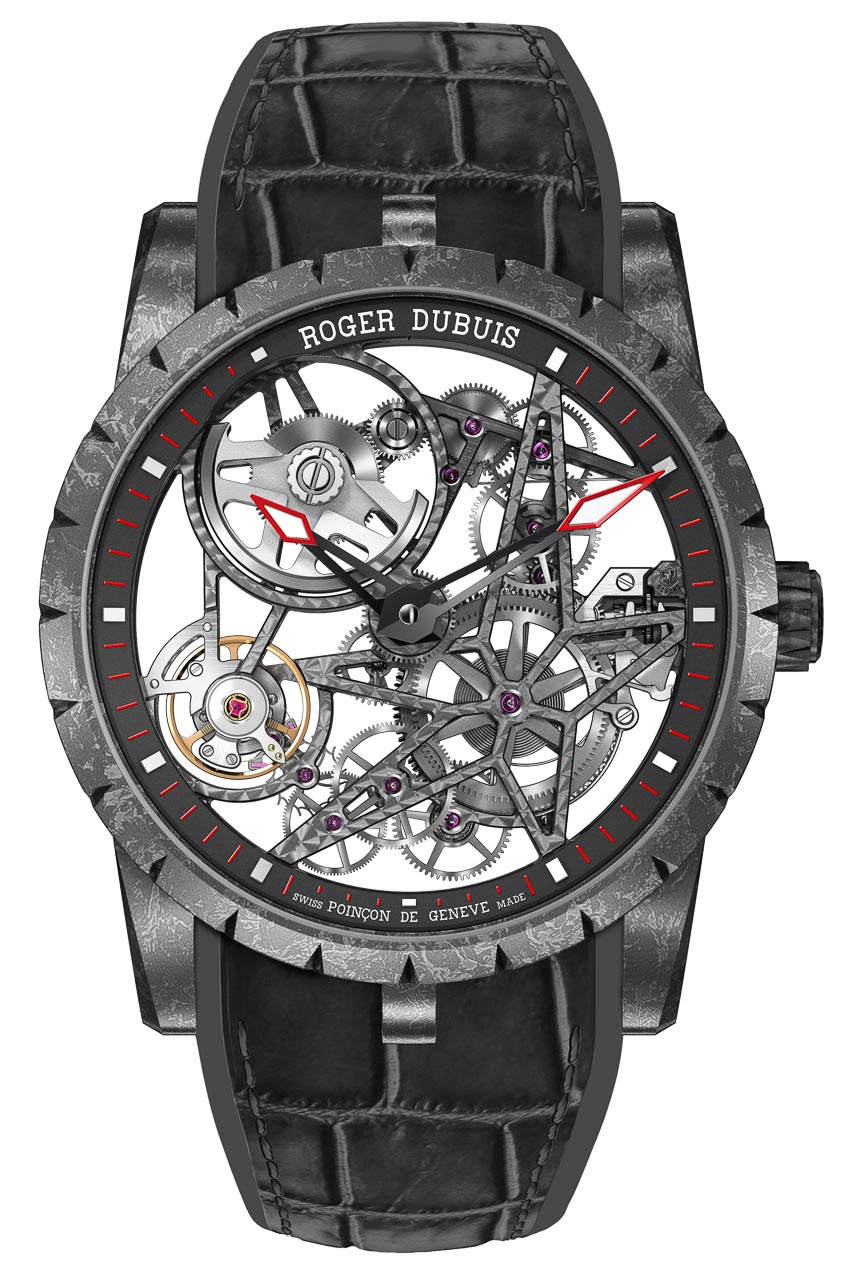 The 2016 Roger Dubuis Excalibur Automatic Skeleton Carbon (“42” was, seemingly, taken out of the name) continues where its related watches left off last year with a sportier version that will, no doubt, sit lighter on the wrist than a metal-cased version. Carbon is becoming a very appealing material for luxury watch makers, with Richard Mille and Audemars Piguet generally getting credit for making this trend into something high-end watch makers are taking seriously. To my knowledge, this Roger Dubuis Excalibur Automatic Skeleton Carbon is the first watch from the brand to have a carbon case. 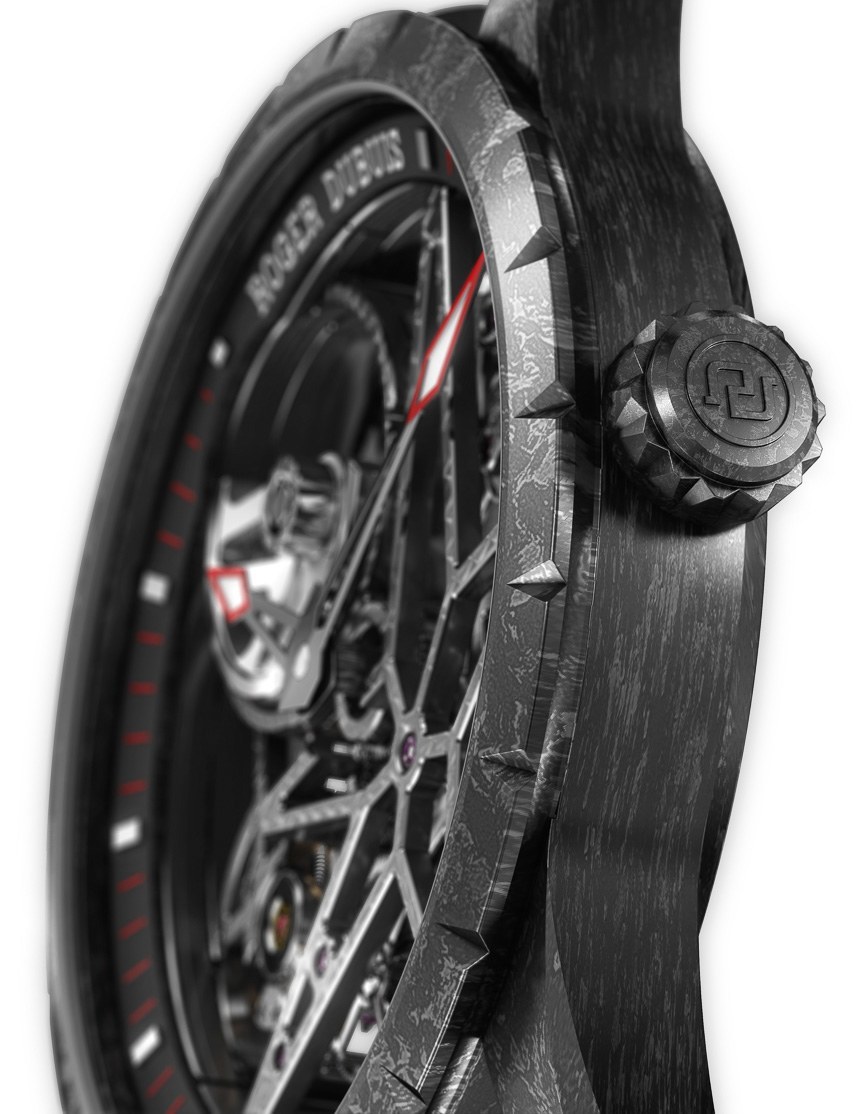 Given the complexity of the Excalibur case and all the little detailed angles (such as on the bezel), I am very interested to see how this case measures up in real life. I further expect significant weight savings compared to the 18k rose gold model but actually not too much compared to the existing DLC-coated black titanium version of the Excalibur Automatic 42 Skeleton that was released last year. The Carbon version will also be black but have a more textured look to the case, of course. You also have a lot of red color elements on the dial for the Roger Dubuis Excalibur Automatic Skeleton Carbon, whereas the DLC black titanium model has a mostly monochromatic dial. In terms of weight, I don’t think the difference between the carbon and titanium case will be that different.

The Roger Dubuis Excalibur Automatic Skeleton Carbon will be “the” sporty model to have for the real high-end lifestyle experience. At 42mm wide and 12.14mm thick, the Excalibur in this size works really nicely. Water resistance is 30 meters, which isn’t great, but this is only a “sporty” watch, not an actual sports watch. 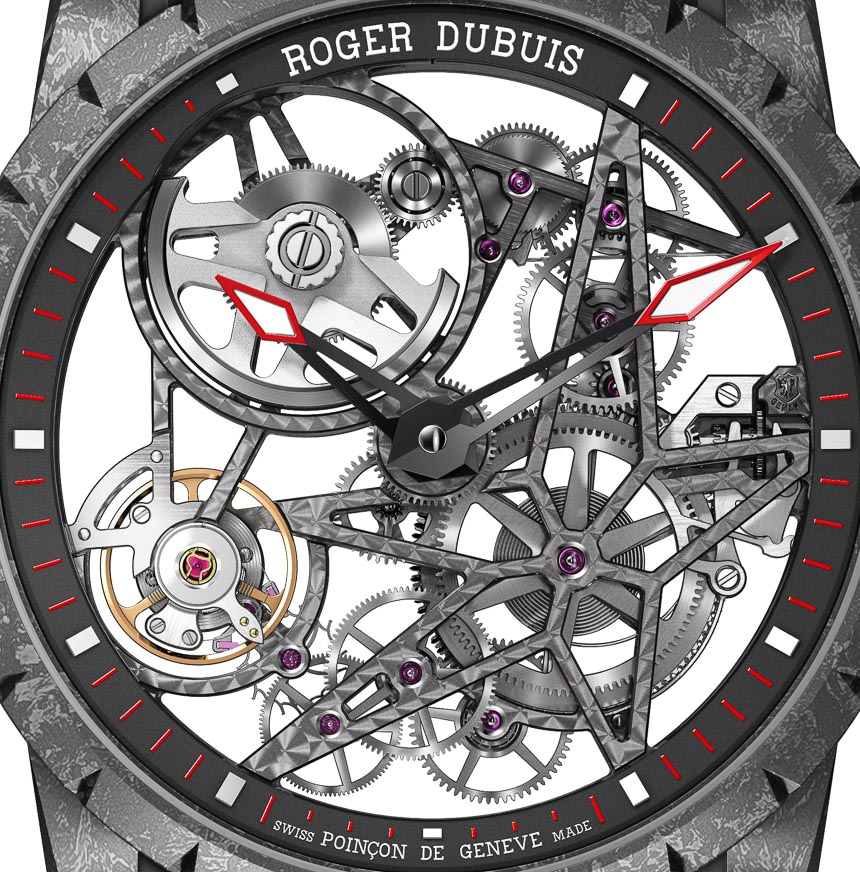 Inside the Roger Dubuis Excalibur Automatic Skeleton Carbon watch is the in-house made Roger Dubuis caliber RD820SQ automatic which uses a micro-rotor that can be easily seen from the dial side to the top left. The movement, as the non-skeletonized RD820, was originally released in 2005 and continues to be a great workhorse. In skeletonized form, the movement looks really cool finished with a dark tone. Note the delicate perlage decoration on the highly web-like movement bridge surfaces.

The movement operates at 4Hz (28,800 bph) with a power reserve of 60 hours and is produced from 167 parts. The movement features just the time with hours and minutes and looks amazing when operating on the wrist given all the visual movement. Calibers like this are actually great when trying to learn how a mechanical movement operates because you can literally see everything working in front of you. Given the production effort and processes involved in making the movement as well as where it is made, Roger Dubuis is able to put the coveted Seal of Geneva mark on the movement, like most other Roger Dubuis timepieces.