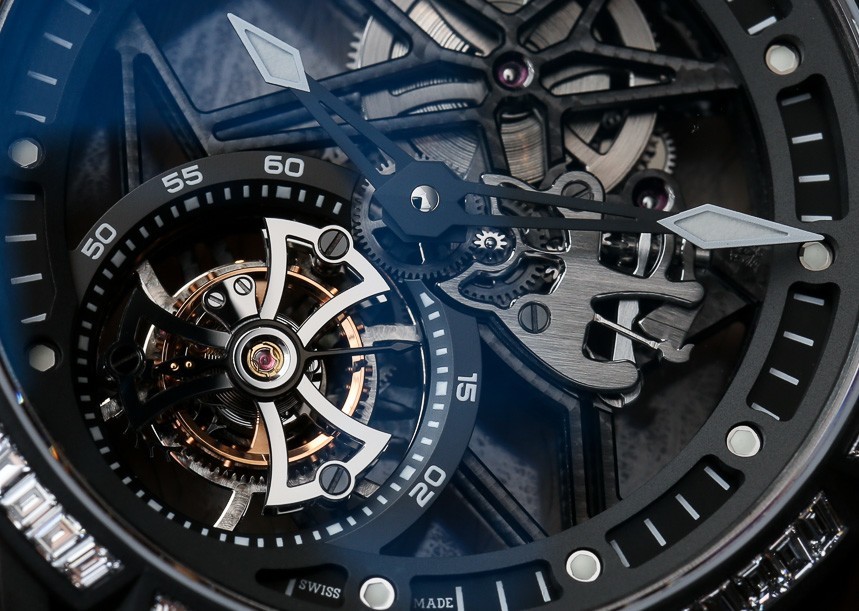 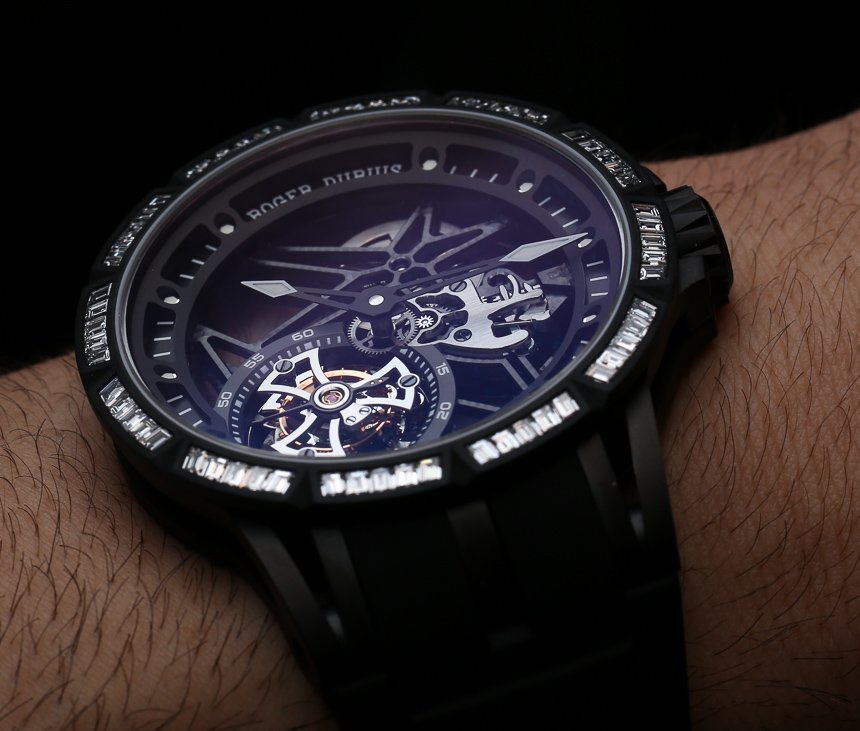 At Roger Dubuis, an impressively high percentage of the watches they sell include tourbillons in the movements. The perennially avant-garde luxury brand is a unique animal in the Richemont stable of watch companies that for the most part, are much more conservative in both design and execution. Roger Dubuis as a company is like the flamboyantly dressed artistic type that still carries himself with confidence among peers all wearing conservative suits. It, then, makes a lot of sense that purposely flamboyant watches are what works for the Swiss manufacture.

When the Richemont Group purchased Roger Dubuis in the early 2000s, it was (in part) their manufacturing capacity and skills that Richemont wanted. As unique as Roger Dubuis can come across at times, they are still a reputable true manufacture of watches – many of which bear the prestigious Geneva Seal. In fact, Richemont’s purchase of Roger Dubuis proved a blessing in many ways, because immediately prior to that, the brands’ watches had a reputation for not being reliable, as production problems resulted in some poorly made components that broke. At least, that issue is a thing of the brand’s interesting and short history. 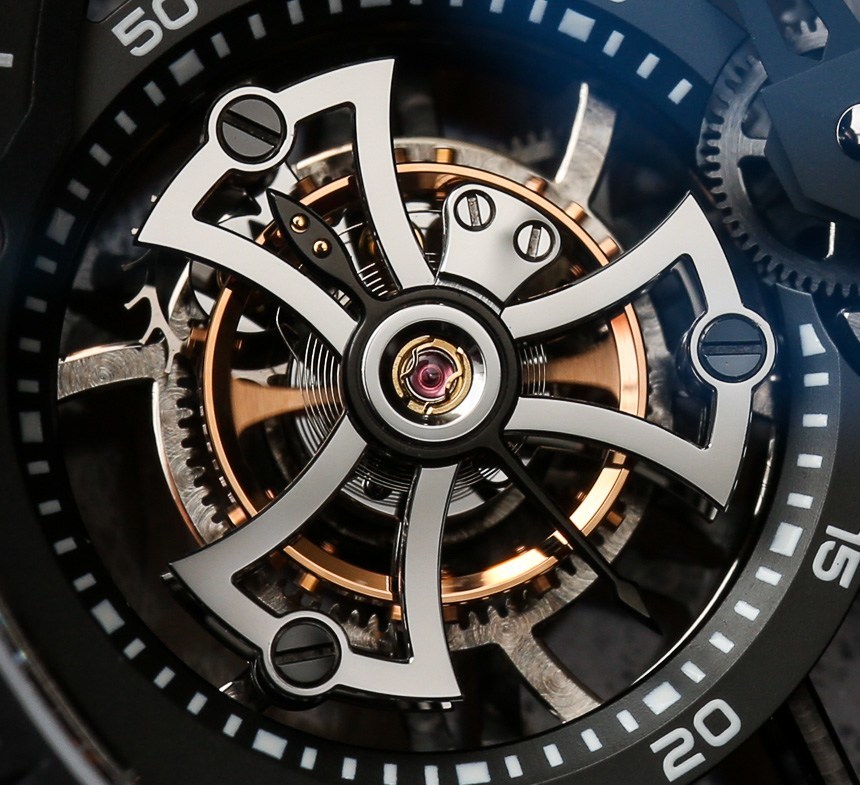 The man “Roger Dubuis” is still around but was not with his eponymously named brand for a long time. He sold the company to investors who later sold it to Richemont. A few years ago, the Roger Dubuis company hired back the man to serve a mostly ceremonial role within the company – but one that does at least appear to have Mr. Dubuis act, in a sense, as the shepherd of the company he started. The Roger Dubuis Hommage collection of watches are nearest to his original designs.

1990s era Roger Dubuis watches look tame by today’s tastes, but at the time were very visually arresting. The brand took a much more bold direction after separating from its founder and slowly started to become the brand that it is today. Even so, I don’t feel like Roger Dubuis has yet to find its comfort zone. I think Roger Dubuis knows what it is good at, but it doesn’t know what to tell people it is good at, and how to visually express that. It will be interesting to see how the brand develops over the next few years as they hopefully develop a more distinct brand personality. For now, it is at least enjoyable to see them trying new things. 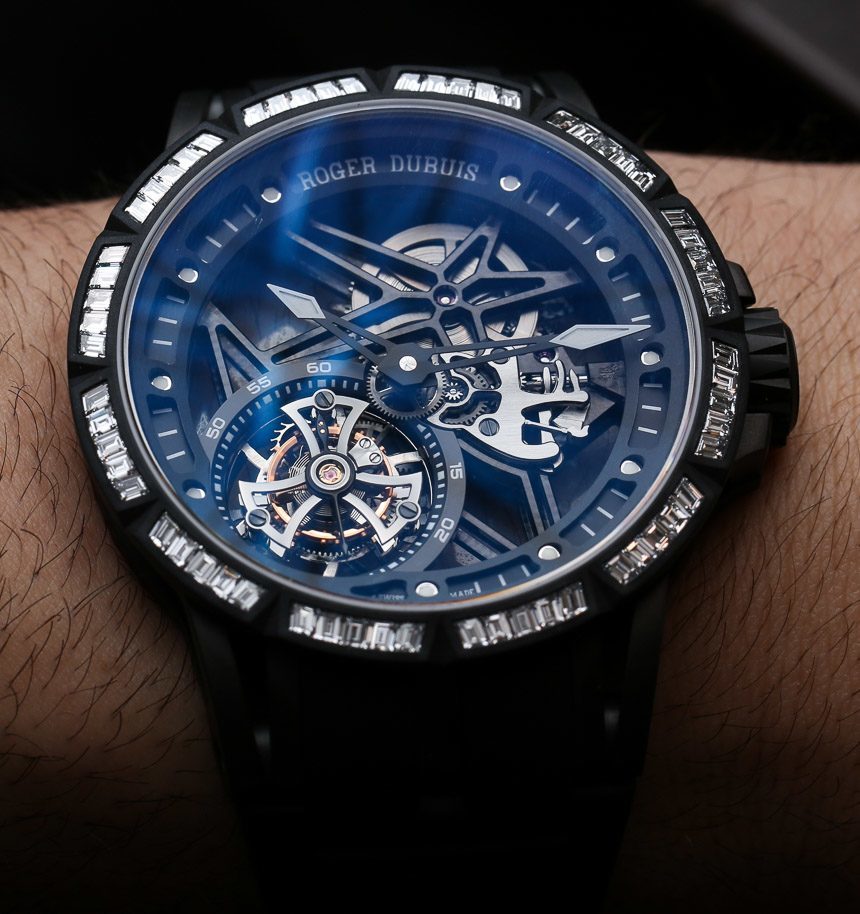 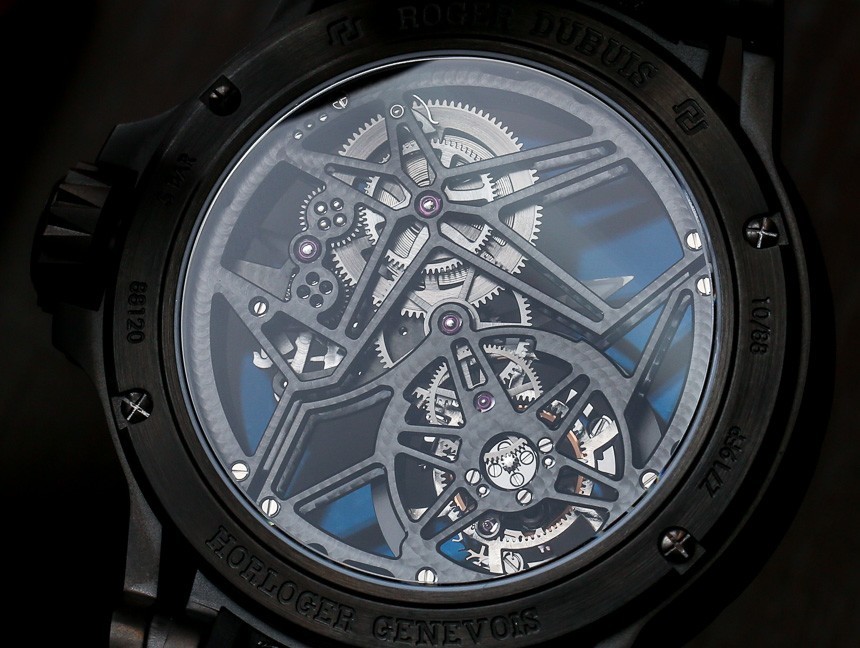 If anything, Roger Dubuis is known for producing interesting mechanical movements which are in many ways attractive classics, and then putting them in edgy model collections, such as the Pulsion, Monegasque, and of course their most popular timepiece family the Excalibur. In the watch industry, Roger Dubuis is known for their always elaborate, mostly confusing, and always interesting to visit booth at the SIHH watch and jewelry trade show that takes place in Geneva each year. Sitting next to fellow Richemont brands such as Piaget, Vacheron Constantin, IWC, A. Lange & Sohne, and others…. Roger Dubuis is the welcome odd man out.

So getting back to tourbillons, all the watches in this article are new Roger Dubuis Excalibur Tourbillon watches for 2015. You can see both single and double tourbillon-based watches. The movements are also all skeletonized – done so in a distinctive manner that Roger Dubuis has become known for. That includes not only the “star” style bridge designs, but the small micro-perlage polishing and the dark gray/black finishing to most of the components. The fact that no one seems to be copying this interesting aesthetic might be an indicator of how complicated it is to produce. 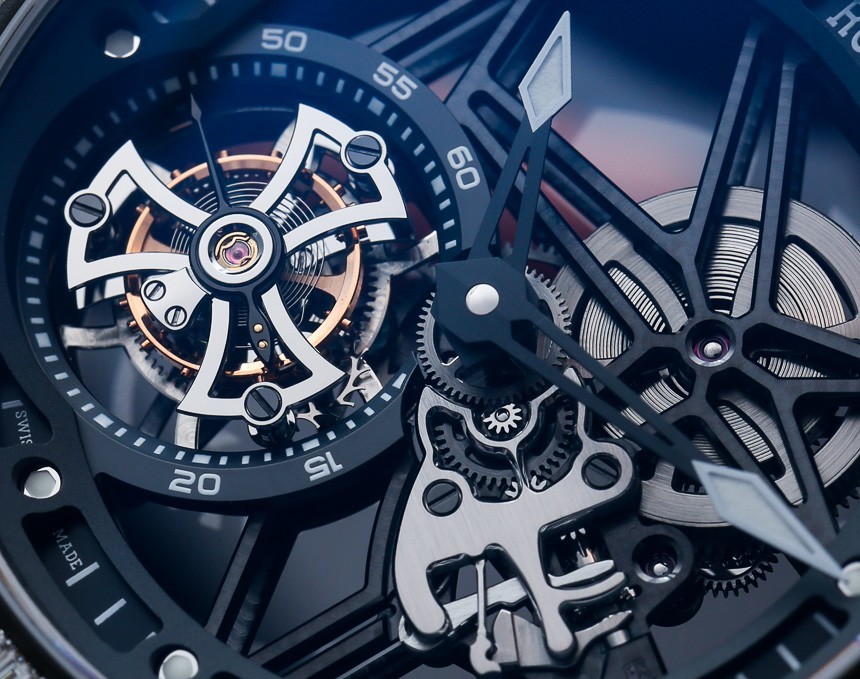 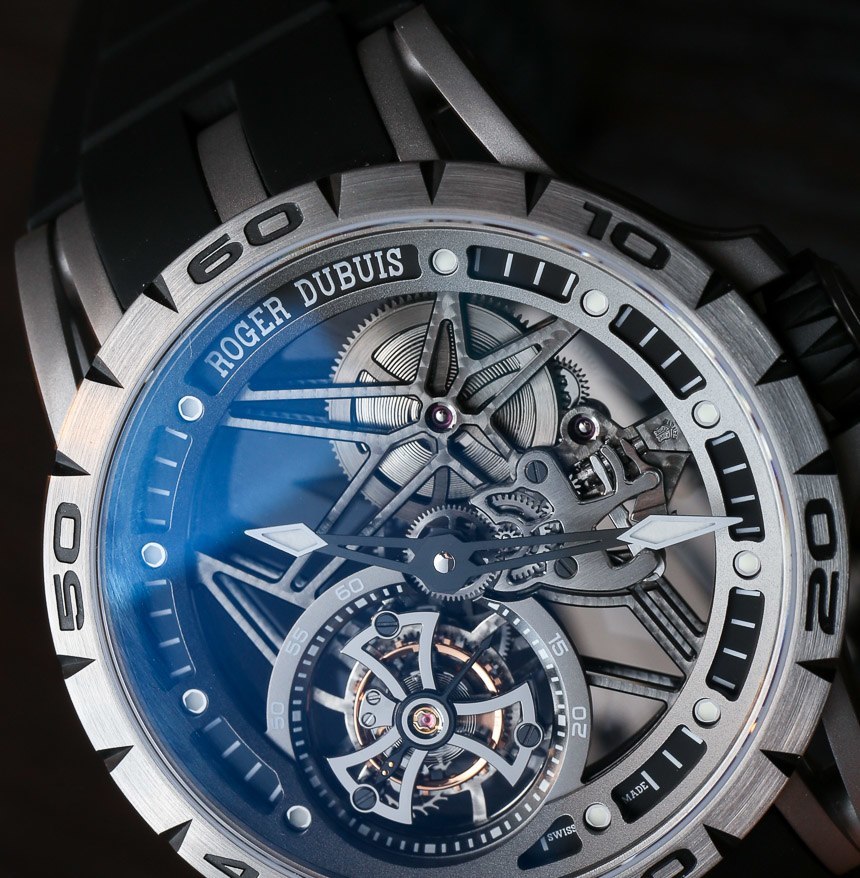 Roger Dubuis doesn’t always seem to know how to market their tourbillon watches in regard to the language they use to describe them. According to Roger Dubuis, 2015 is the year of the “Astral Tourbillon,” even though they never really elaborate on what that is. I believe it refers to the five-pointed star that the bridge over the mainspring barrel forms. Roger Dubuis also added “Spider” the name of their watches because they feel that the design of their skeletonized movements looks sort of like a spider web… and a star. It’s all just words which are used in an attempt to best explain what are, in my opinion, difficult to explain products.

One has to understand the primary purpose of a tourbillon in a luxury watch circa 2015. In the 1940s, Omega first put a tourbillon into a wrist watch movement, and in the 1990s, tourbillon-based high-end watches started to become the in-watch of the elite. When Omega decided to put a tourbillon into a wrist watch, it was really an experiment to see if it helped make the mechanical movement more accurate. Tourbillons where invented by Breguet (the man) in the late 18th century as a way of negating the pull of gravity on a timepiece’s balance wheel by spinning it around itself. The idea was that by subjecting the balance wheel to the pull of gravity from all angles the negative effects could be averaged out during the regulation process. 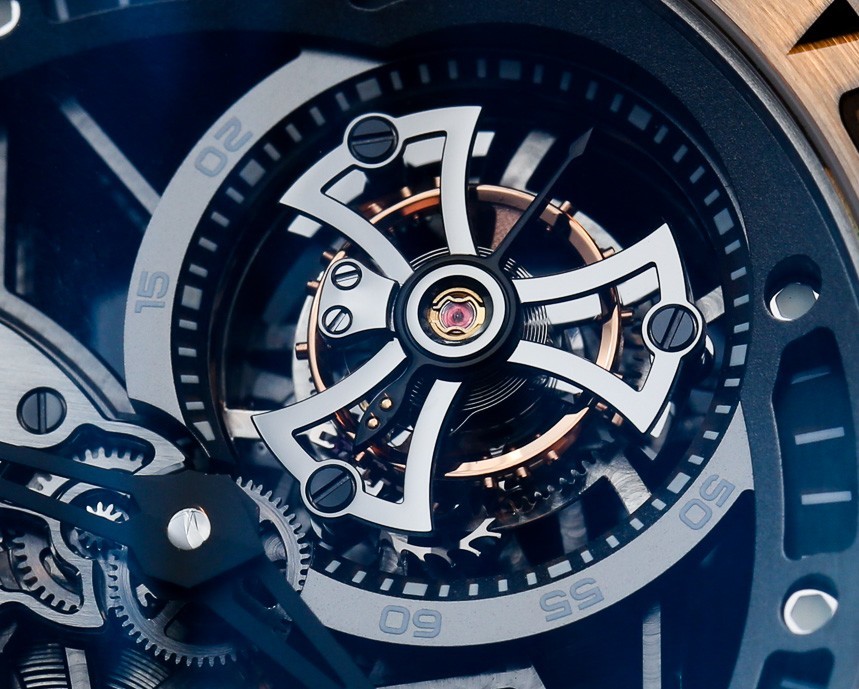 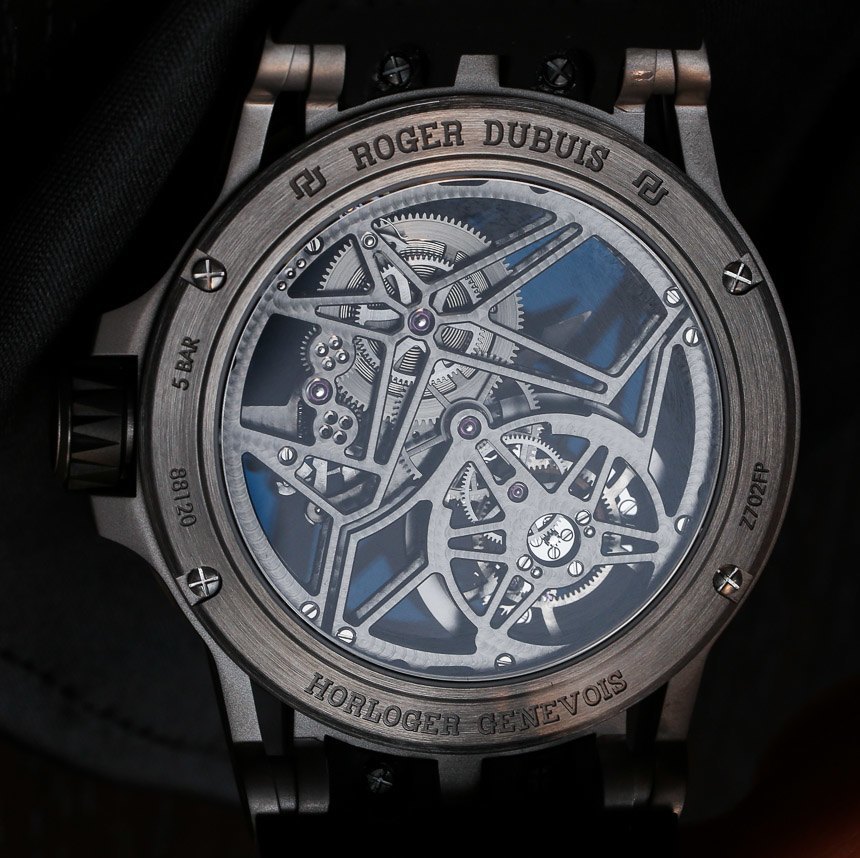 Tourbillons may have been a factor in increasing the accuracy of pocket watches and clocks that enjoyed a relatively stable existence being in the same position all the time, but it has never really been proven that they increase the accuracy in watches. In fact, in a lot of instances, tourbillon-based timepieces are less accurate than those without them unless they are regulated and designed very well. When Omega made those few watch movements with a tourbillon they were actually for competition purposes (there used to be competitions where watchmakers would compete for producing the most accurate movements) and not strictly meant to be cased in a wearable watch.

The modern popularity of the tourbillon is intrinsically linked to what modern luxury is in many ways about – presentation, perception, and visual appeal. As complicated and cool as a tourbillon is – it is still a “show off” complication meant to visually express to those who see your timepiece that you can afford something expensive. Using this logic, you can answer the question of “why put two tourbillons (or more) into a wrist watch movement?” The answer – while, of course, involving technical challenges, and a tradition of mechanical watch making, etc. – is that the person wearing one can afford something doubly as expensive as a single tourbillon movement. Don’t overthink it, that is the simple truth – and there really isn’t anything wrong with that. 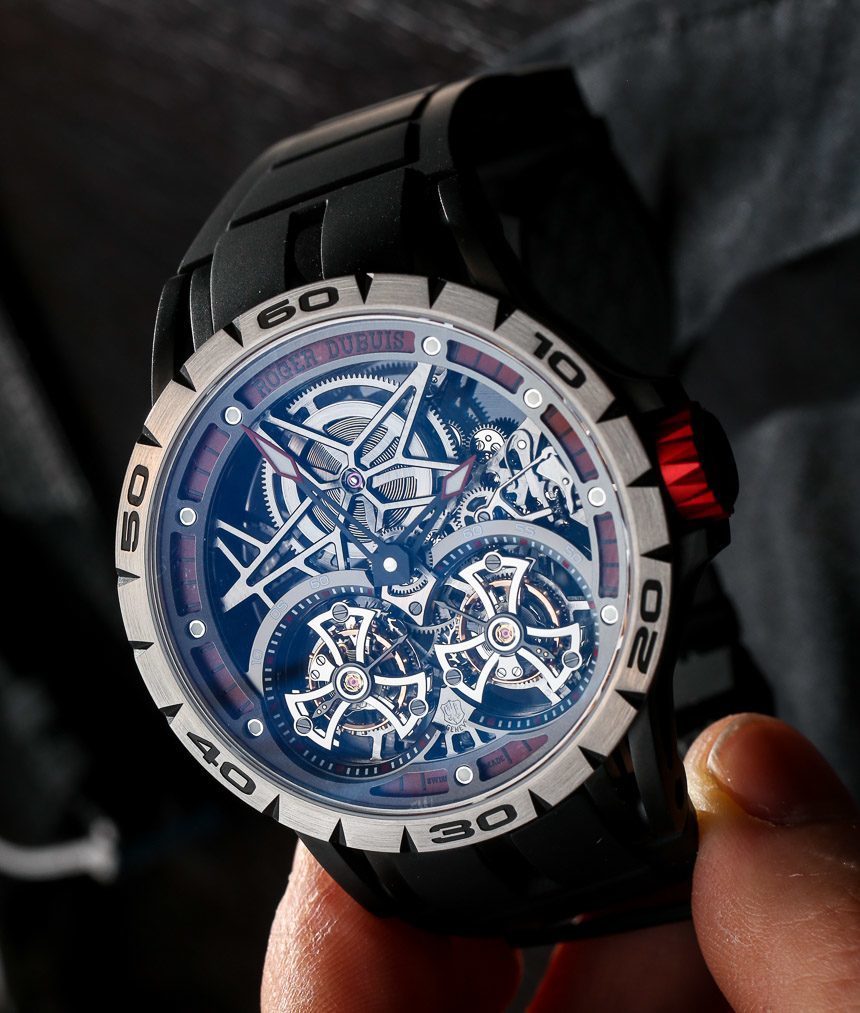 It isn’t classy-sounding for Roger Dubuis or any other brand to go out and say that, but it is the truth. We live in a society where showing off your success (real or otherwise) is an important part of modern existence. How else can people in an increasingly remote and mobile society know how to interact with new people they meet if those people don’t wear social clues about their relative status – if, of course, that is important to you. Some people prefer to be more discreet about their success (or lack thereof), and others want to make a bold statement about it. The watch industry has products for both of these camps equally, and it just so happens that Roger Dubuis right now is a brand that wants to cater to the latter.

Along that path is another interesting “innovation” from the brand for 2015 that is worth bringing up as an example of what luxury watch makers are prone to getting excited about. One of the 2015 Roger Dubuis Excalibur Spider Skeleton Flying Tourbillon watches comes with a “gem-set rubber bezel” (ref. DBEX0480). This 45mm-wide black DLC-coated titanium watch has a rubber coated bezel that is also set with 60 baguette-cut diamonds (about 2.24 carats worth). The large sparkling stones contrast with the matte black surface of the rubber in a way that melds a degree of sportiness with jewelry romance. You either “get it” or you don’t, but it is interesting to understand who this product is intended for. Inside the watch is the in-house made and manually-wound Roger Dubuis caliber RD505SQ skeletonized movement with the time and flying tourbillon. It exists as a limited edition of 88 pieces. 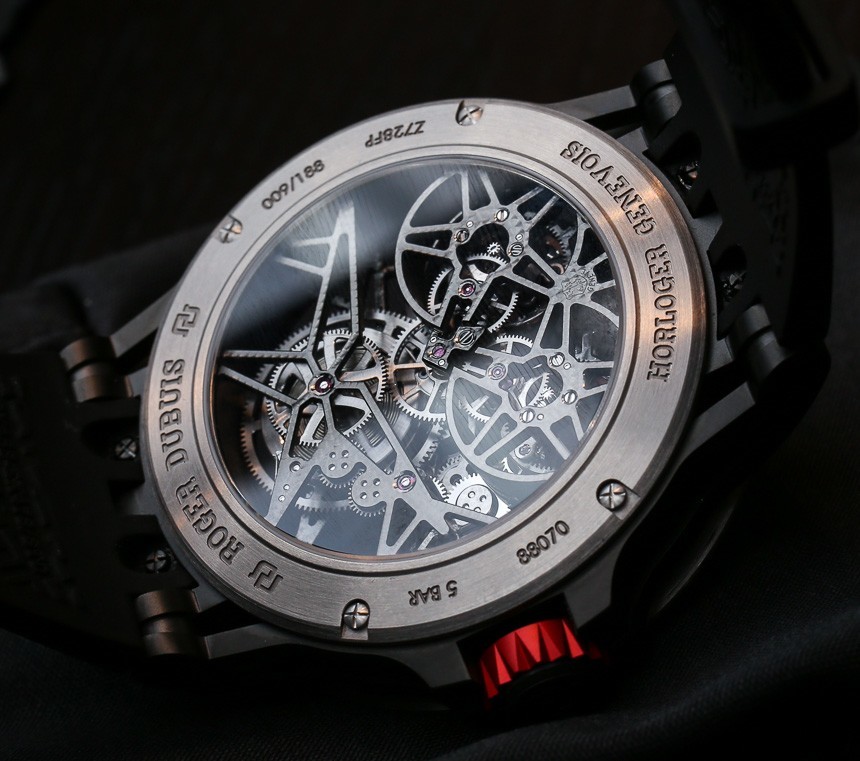 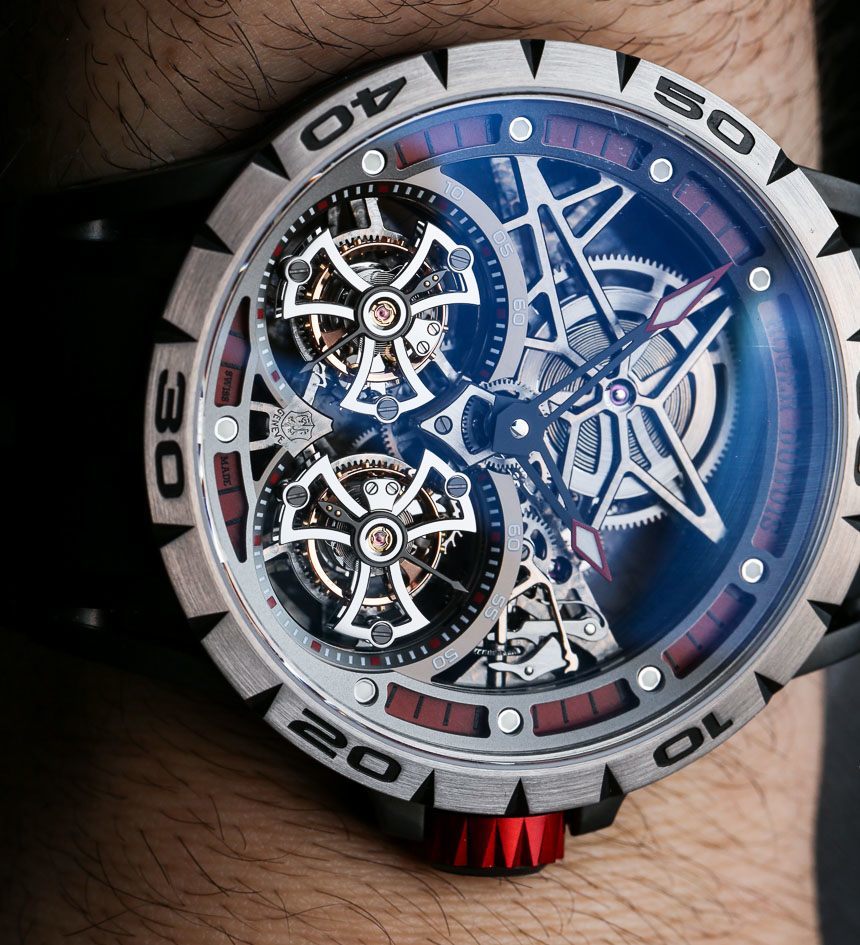 That same Roger Dubuis Excalibur Spider Skeleton Flying Tourbillon watch exists in a more “traditionally” sporty Roger Dubuis Excalibur case (ref. DBEX0479) that is without the black coating and in a brushed titanium case. Here, you get what is one of the most proactive luxury sport-lifestyle watches in the world, in my opinion. The 45mm-wide Roger Dubuis Excalibur case is a bold (and remarkably comfortable) statement on the wrist and has a pseudo-diver’s style bezel design (non-rotating) that alludes to an active lifestyle for the wearer. On the rubber strap, you get to wear this big, lightweight timepiece that feels like a sport watch, but really contains a meticulously constructed and hand-finished skeletonzied tourbillon movement. Yes, it is all about show – but at the end of the day, there is still impressive technique and a true horological spirit to the piece.

The typical cage design of Roger Dubuis tourbillons has always been attractive, in my opinion, and helps add to the refined look of these spinning regulation systems. The tourbillons hint at being avant-garde in design but are still very classic and traditional compared to the other elements in most of today’s Roger Dubuis watches. Speaking of which, it is interesting to consider that the Roger Dubuis watch brand is 20 years old in 2015, having been founded in 1995. The tourbillons rotate fully once each 60 seconds and can double as a seconds indicator, given the small hand in the case. The balance wheels within them operate at a frequency of 3Hz (21,600 bph). The RD505SQ movements have a power reserve of 60 hours when fully wound. 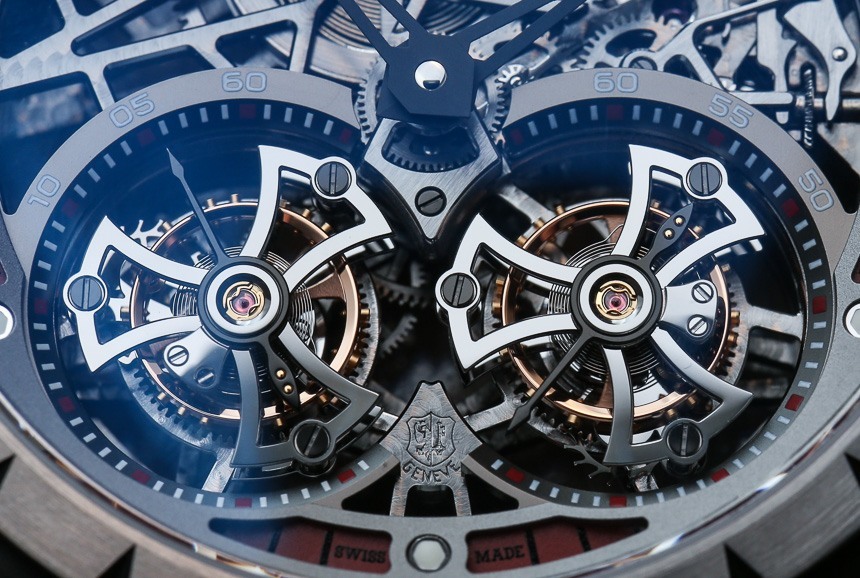