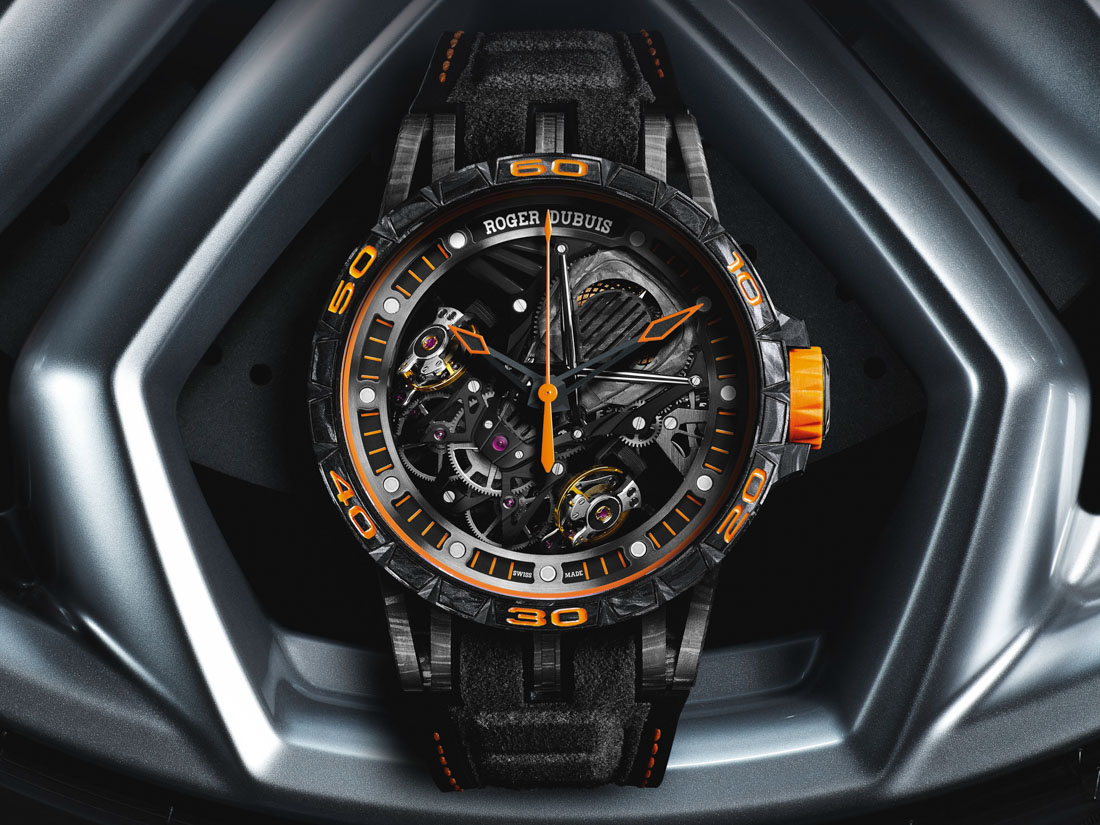 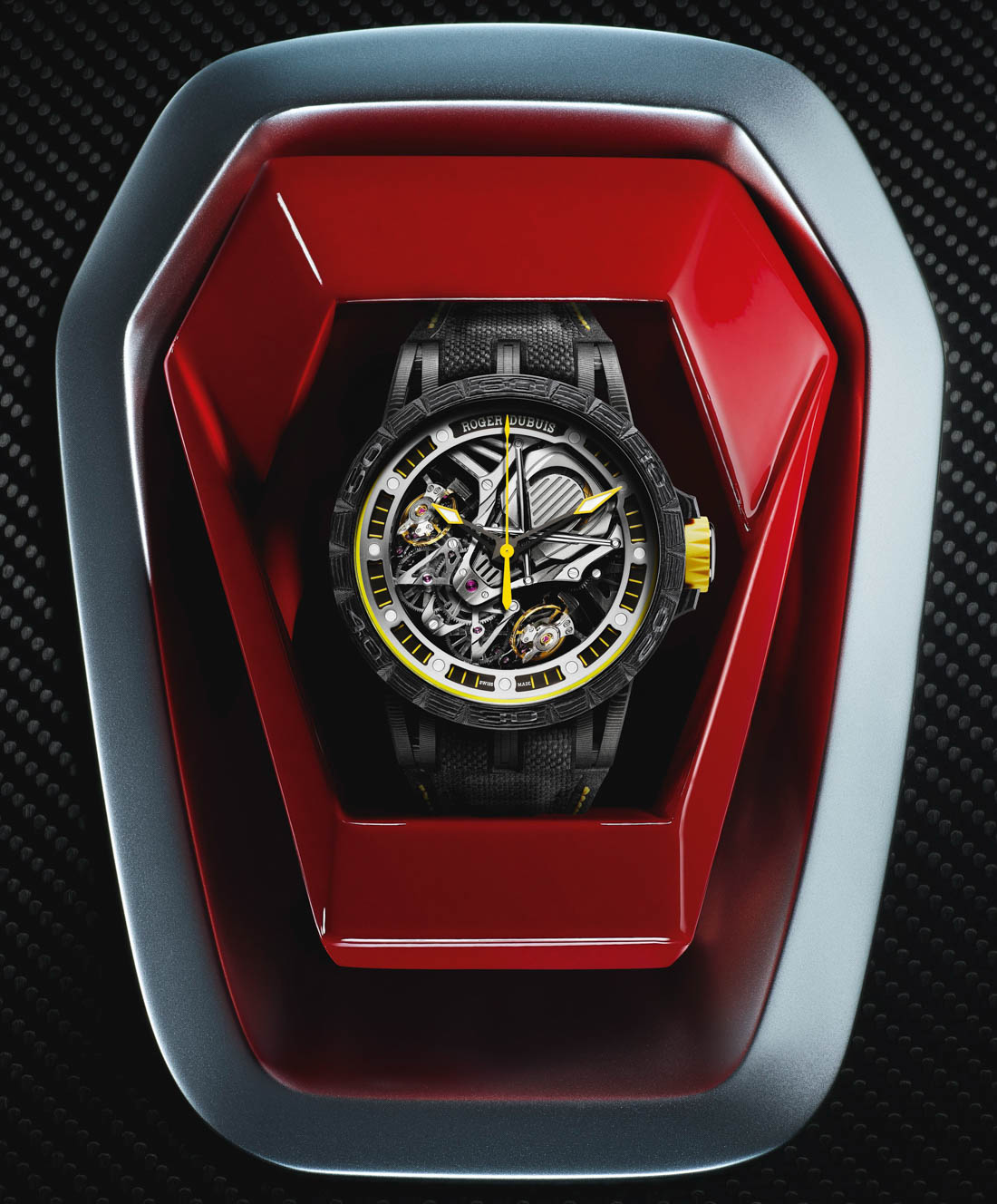 I have seen Emmy-award winners less excited than the Roger Dubuis team has been in the recent past – and it’s not just me, I’m sure: if you were to spend any time, no matter how brief, chatting with them about their huge new partnership, you could tell something super exciting, “a new chapter” as they call it, was about to begin… And today, at last, begin it did, with the announcement of Roger Dubuis becoming official partner of Lamborghini. A new development of such magnitude naturally brings with it new watches and, what’s better, now a new caliber as well! Enter the Roger Dubuis Excalibur Aventador S and its Duotor movement. 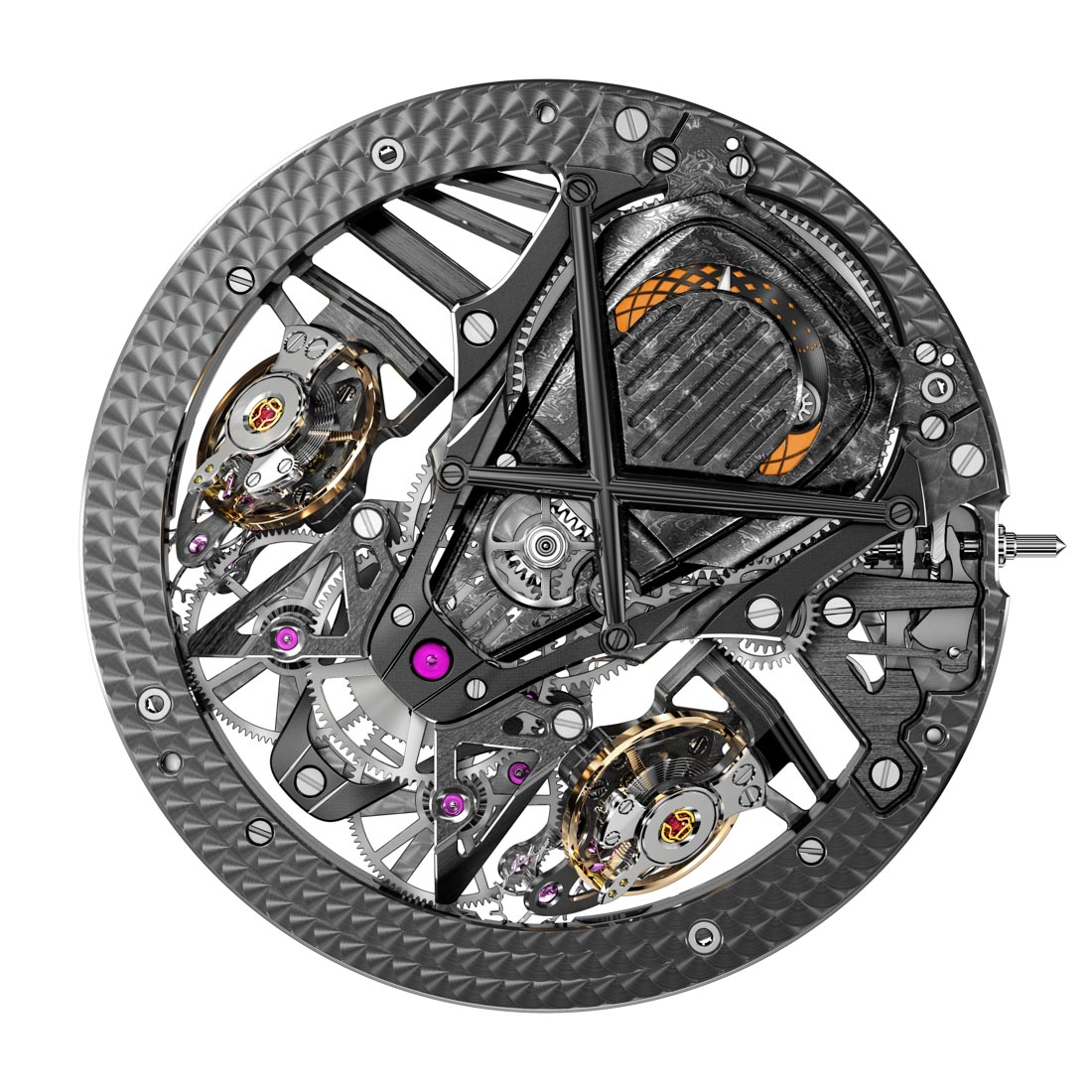 As the launch event is still happening today and tomorrow, we’ll prepare a hands-on look at the two versions of the Excalibur Aventador S once we have enough images and experiences to share, but we should, by all means, do a quick run-down on what this new partnership means, how it’s going to unfold, and check out the basics of the two watches as well – though, again, at the time of writing this I am still looking forward to seeing and photographing them up close. 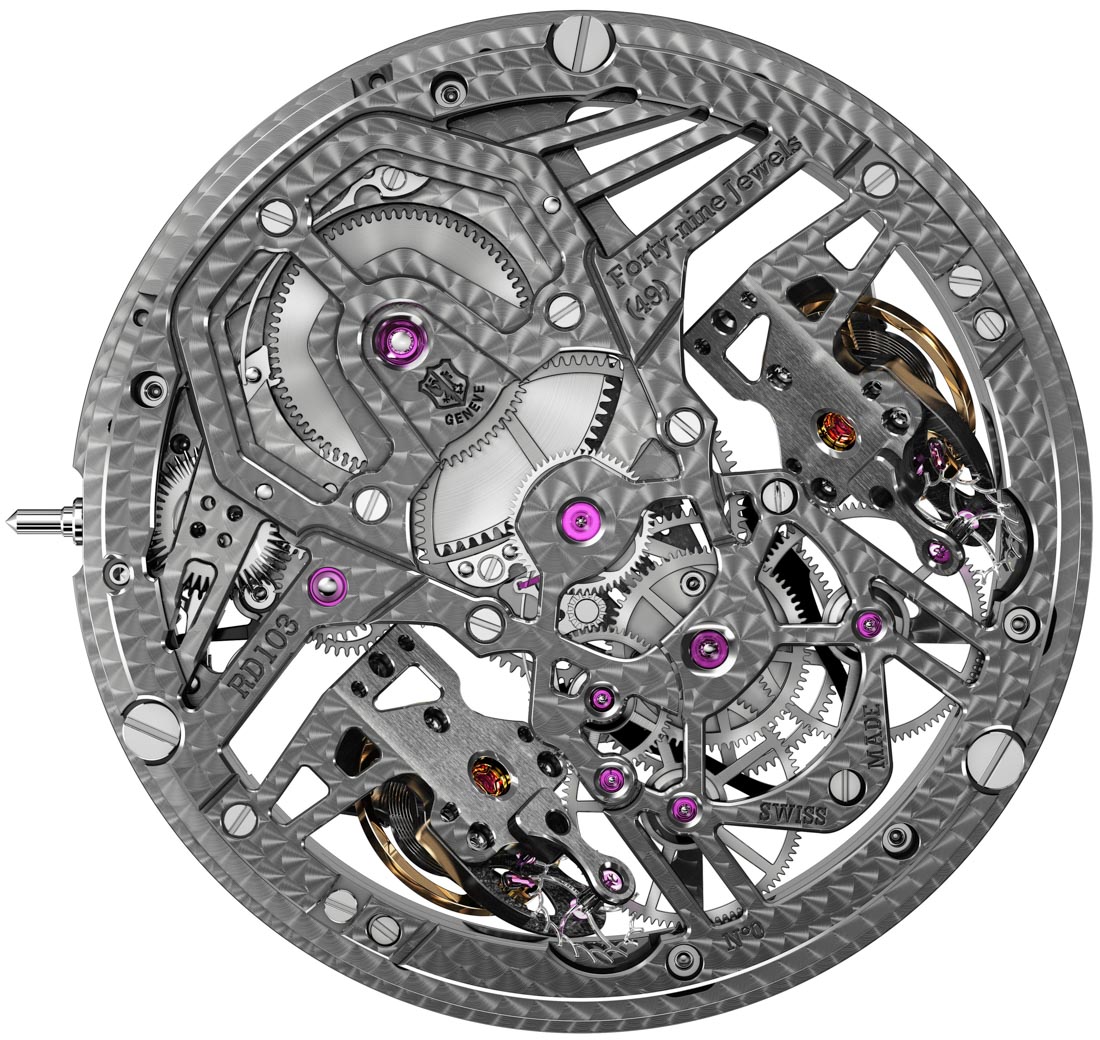 The (somewhat confusing) fact of the matter is that today’s announcement actually mentioned Lamborghini Squadra Corse as Roger Dubuis’ partner, which is Lamborghini’s motorsport division, while the watches are named after the flagship “raging bull” road car model of our time, the Aventador S. This happened for a number of reasons which soon won’t matter one bit, as Roger Dubuis’ partnership with Lamborghini is a properly thorough one that will include all of Lamborghini, not just its motorsports division. 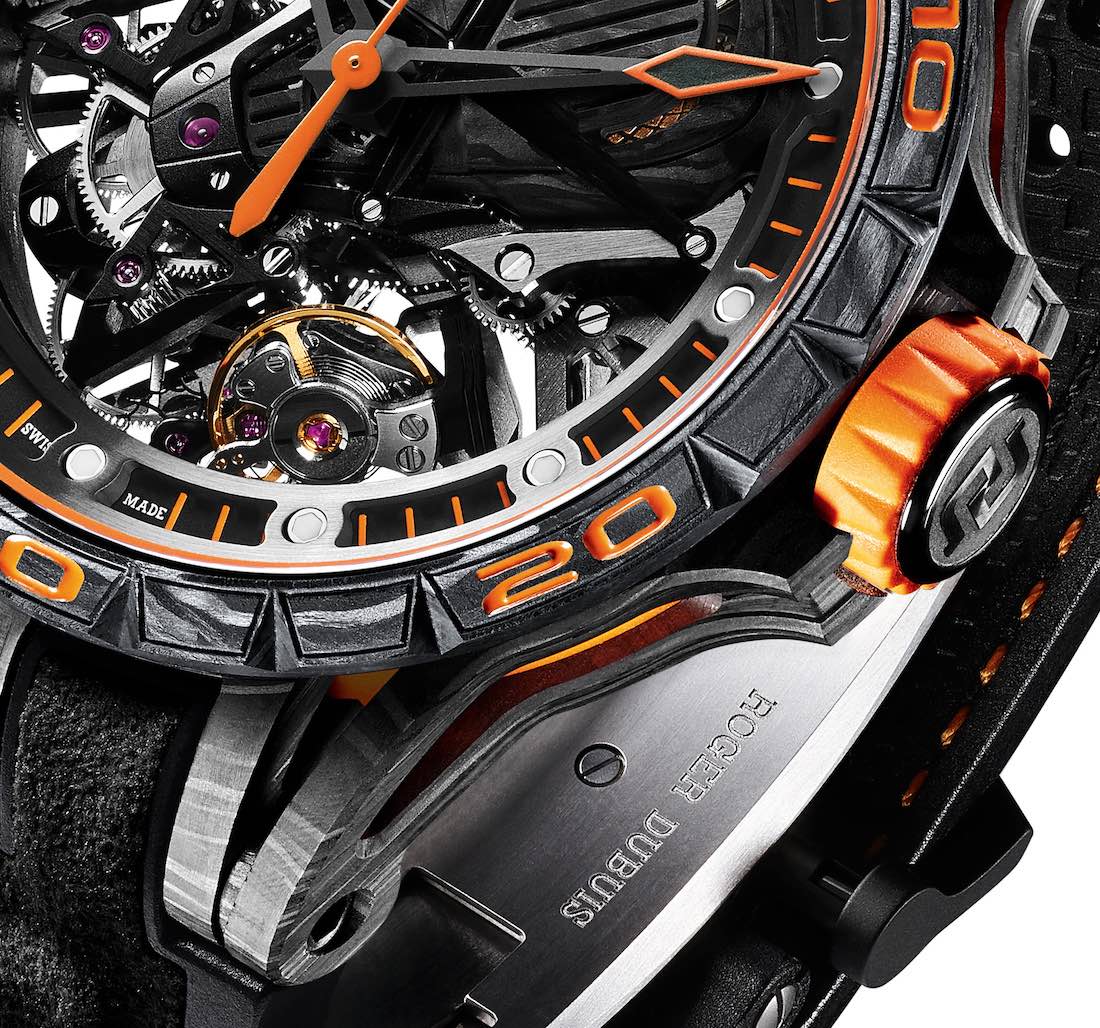 The similarities between Roger Dubuis and Lamborghini are uncanny, and you really don’t have to dig up history books or digest made-up stories to get to their synergies: both brands produce around 3,500-4,000 “pieces” a year, both strive to merge high-tech engineering with, ahem, flamboyant design, both focus on just two product lines for now (Aventador and Huracán, Excalibur and Velvet), and both belong to a major group (Volkswagen and Richemont) in which, somehow, they still appear to be able to do whatever the heck they want. 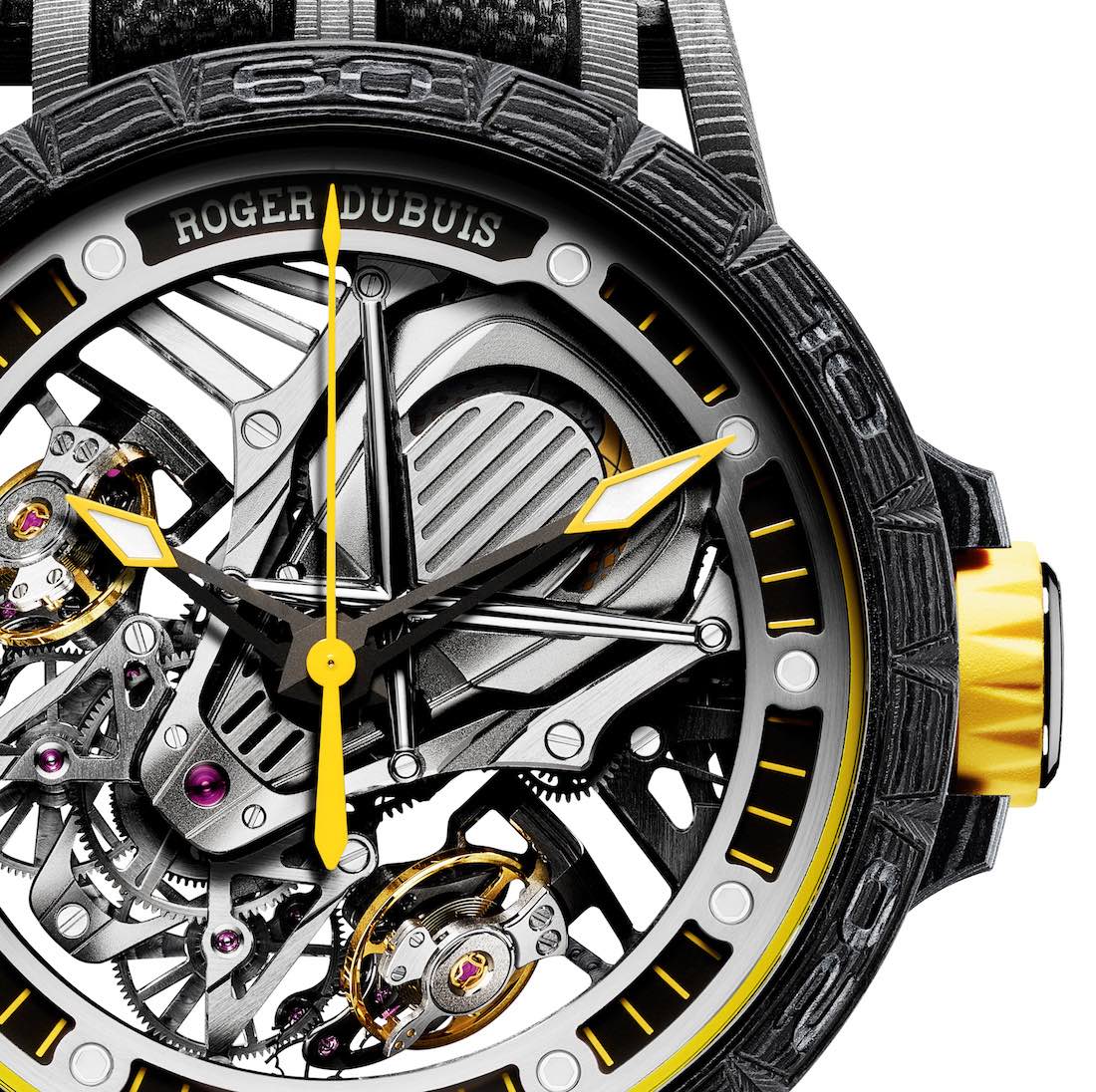 On this note, allow me to cry-out and say how extremely rare it’s been to see a watch brand harness a partnership with a major car manufacturer. Hublot has been pretty much the only one to really create and maintain momentum with their Ferrari partnership, finally showing the watch world that it can actually be done; and so I’d very much love to see Roger Dubuis show us how a yet-more-niche brand can make the most of such a remarkable opportunity. It isn’t difficult to imagine Lamborghini being excited about a new partner too, after Blancpain has largely and disappointingly neglected their chance with the Sant’Agata-based carmaker. 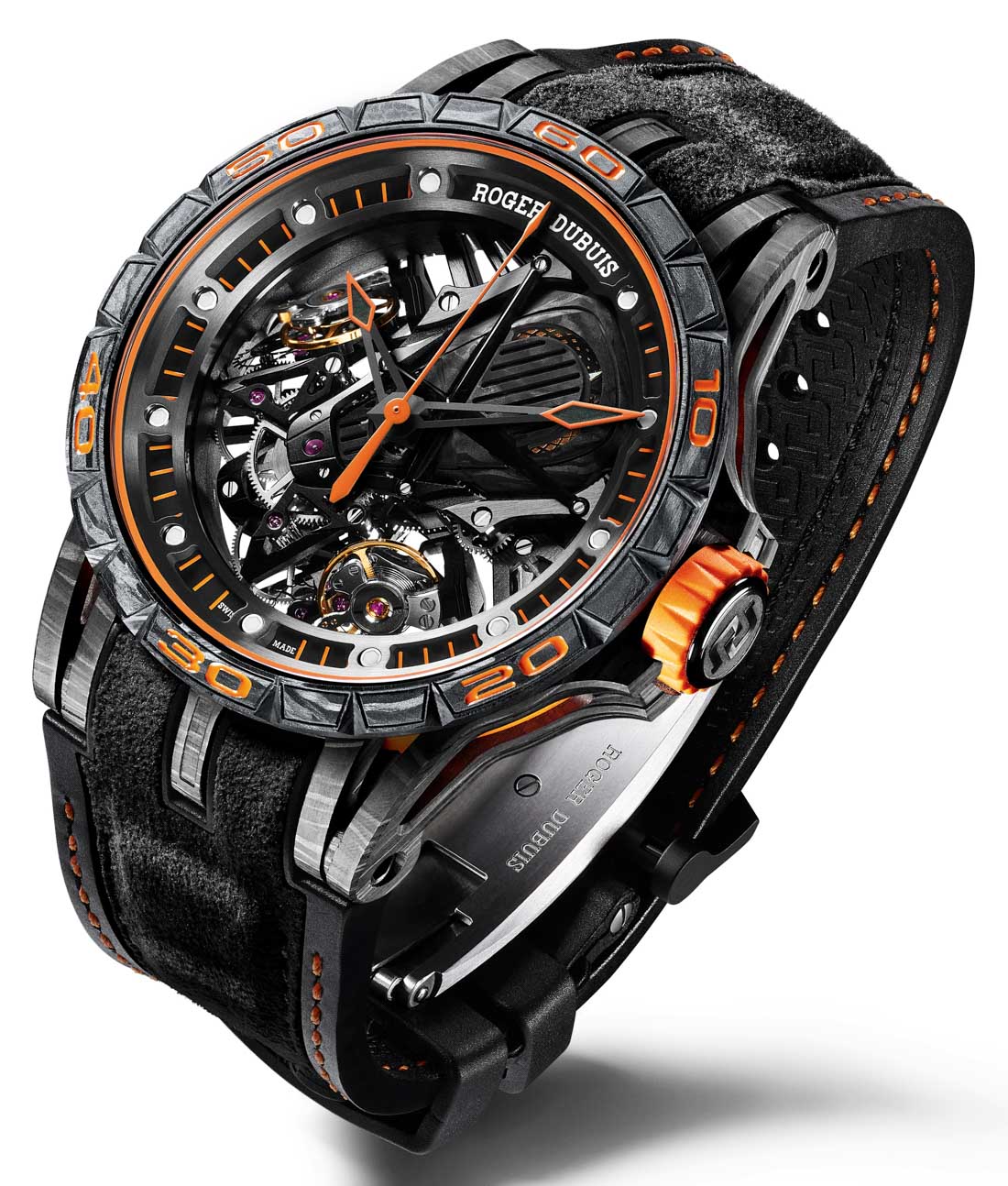 The Roger Dubuis Excalibur Aventador S is the first watch dedicated to this new partnership, coming in two variations, available in limited runs of 88 and 8 pieces, respectively. For some reason they are both called exactly the same – Excalibur Aventador S – although differences in their use of materials for both the case and movement mean they are not just two color variants of the same thing.

The movement architecture is the common theme between the two Excalibur Aventador S watches: called the Duotor, avid fans of Roger Dubuis and/or ultra high-end watchmaking will soon realize both from the images and the name how this is a spin on the absolutely insane and equally famous quadruple-balance wheel Quatuor (hands-on here). 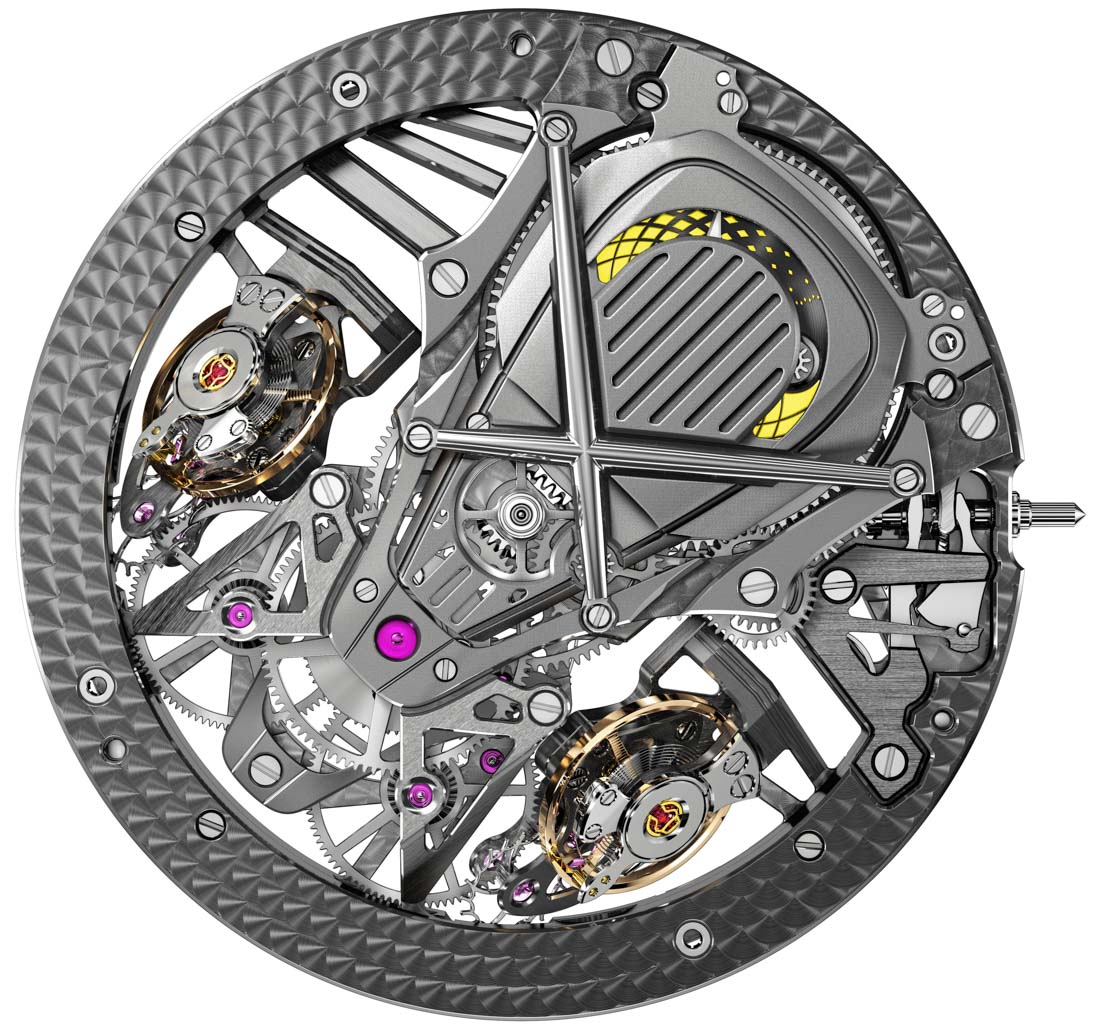 The Roger Dubuis Duotor movement is a nerd-fest designed to match the awe-inspiring complexity of a Lamborghini engine, no less. Two balance wheels have been installed at a 90° angle – mimicking the V-layout of the cylinders in a car engine. The balance wheels are independently tuned so that one runs faster and the other slower than a perfect 0 seconds per day rate and are connected via a differential (like the rear wheels of a car) so that their rates are averaged out. 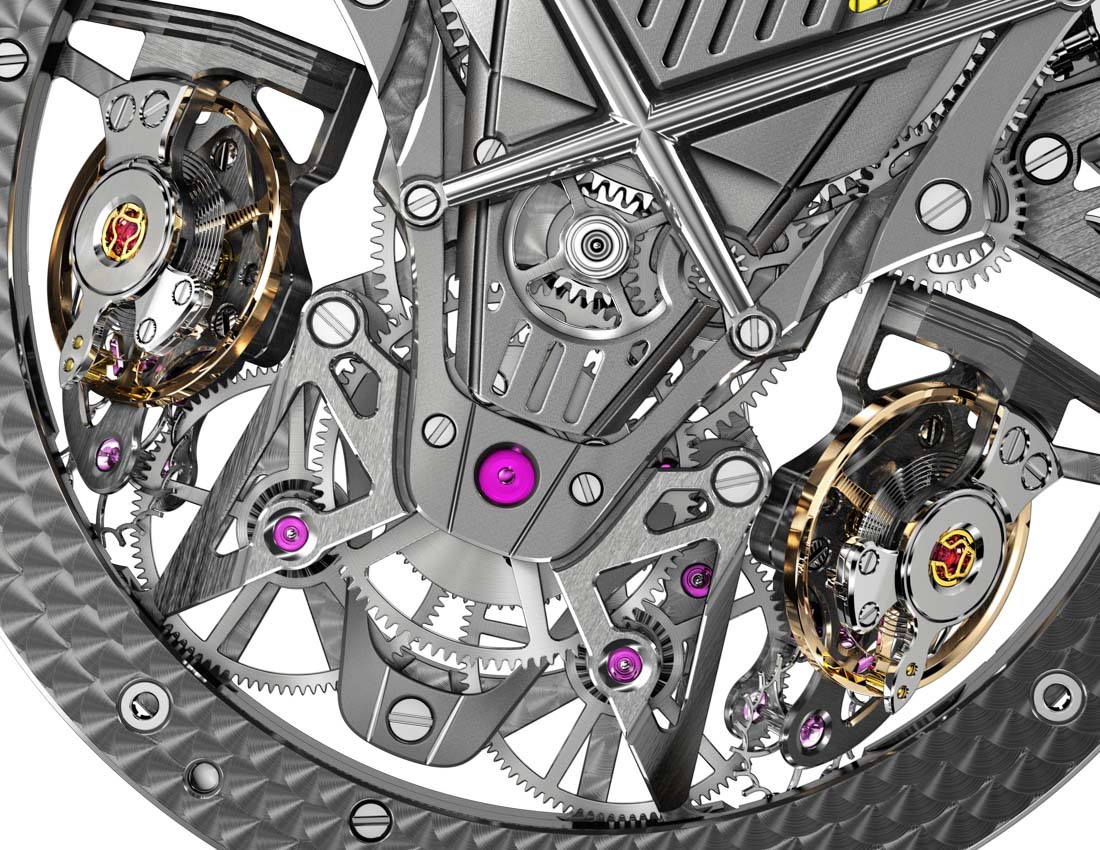 The Duotor’s differential is located under the bridge in the center, averaging out the rates of the two balance wheels.

The nerd-fest is far from over: the differential is followed by a remontoir d’egalité, which is a first for Roger Dubuis and is responsible for creating the jumping advancement of the central seconds hand. I’ve had the chance to once again catch up with Gregory Bruttin, product strategy director and, more importantly from our perspective, the main engineer behind Roger Dubuis’ most unusual creations – including the Quatuor, of course.

Given the chance, some time into our chat I asked Gregory if he had considered adding a chronograph – not merely because it traditionally goes with the car theme, but because the watch-nerd in me was curious how far this double-balance movement can be modified. His response ended up surprising me quite a bit: since Roger Dubuis has several dozen calibers it doesn’t use, and that wide range includes several traditional chronograph calibers, he said he would have found it “easy” and “boring” to place a chronograph onto the back of this movement. 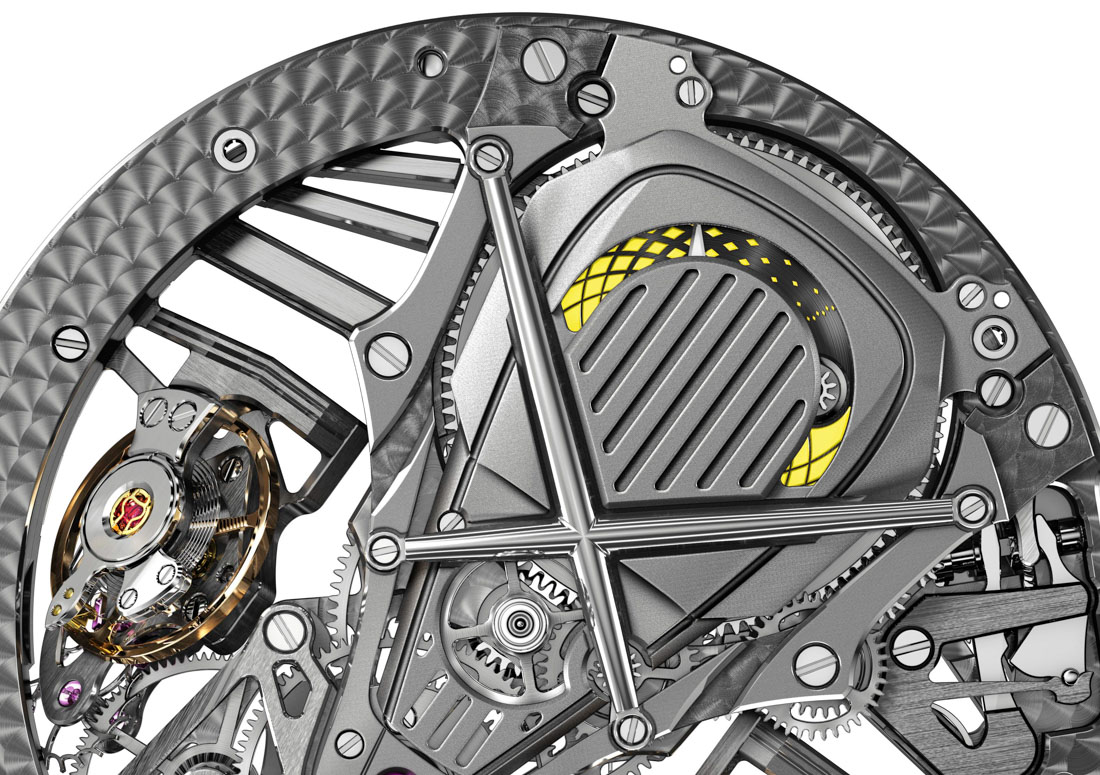 Sounds like a bold statement, but I could see his genuine excitement and pride about this jumping seconds, something that was a first for Roger Dubuis and, again, something that he got to figure out and engineer into this remarkably complicated, double-balance movement. He also noted customer feedback regarding the Quatuor, which, though praised (and set-up) to be accurate, never had a seconds hand – and traditional, sweeping seconds hands aren’t exactly accurate either. These pieces of feedback made him want to go for the jumping seconds, so as to ensure that the accuracy of the Duotor movement can be traced with ease – talk about an engineer proud of his work!

Having had the chance to briefly play with the Excalibur Aventador S, I can, in advance of a hands-on article, say that it looks leaps and bounds better in every way than it does in the official images. The official renders allow for an okay-ish appreciation of the unusual layout of the movement, but they say nothing about the three-dimensional structure that is so much easier to see in the metal. The various types of Geneva Seal-compliant finishings also add a great deal to what is a rather spectacular design. More about the cool quirks and features of the Duotor movement, along with highly detailed macro images, to come soon.

The Roger Dubuis Excalibur Aventador S comes in two variations: limited to 88 pieces is the version with a multi-layered carbon case over a titanium container and yellow rubber accents. The other version is limited to just 8 pieces and its case and some select parts are crafted from a certain C-SMC forged carbon that is exclusive to Lamborghini, as is used for select car interior and exterior trim pieces. This version comes with orange rubber accents and is limited to 8 pieces because of just one particular piece that is, as Roger Dubuis says, so difficult to work with at this miniature level, that they have to throw 9 out of 10 parts away at different stages of the production process. Both versions are 45mm wide, 14.05mm thick, and are tested for 5BAR (50m depth equivalent) pressure resistance. 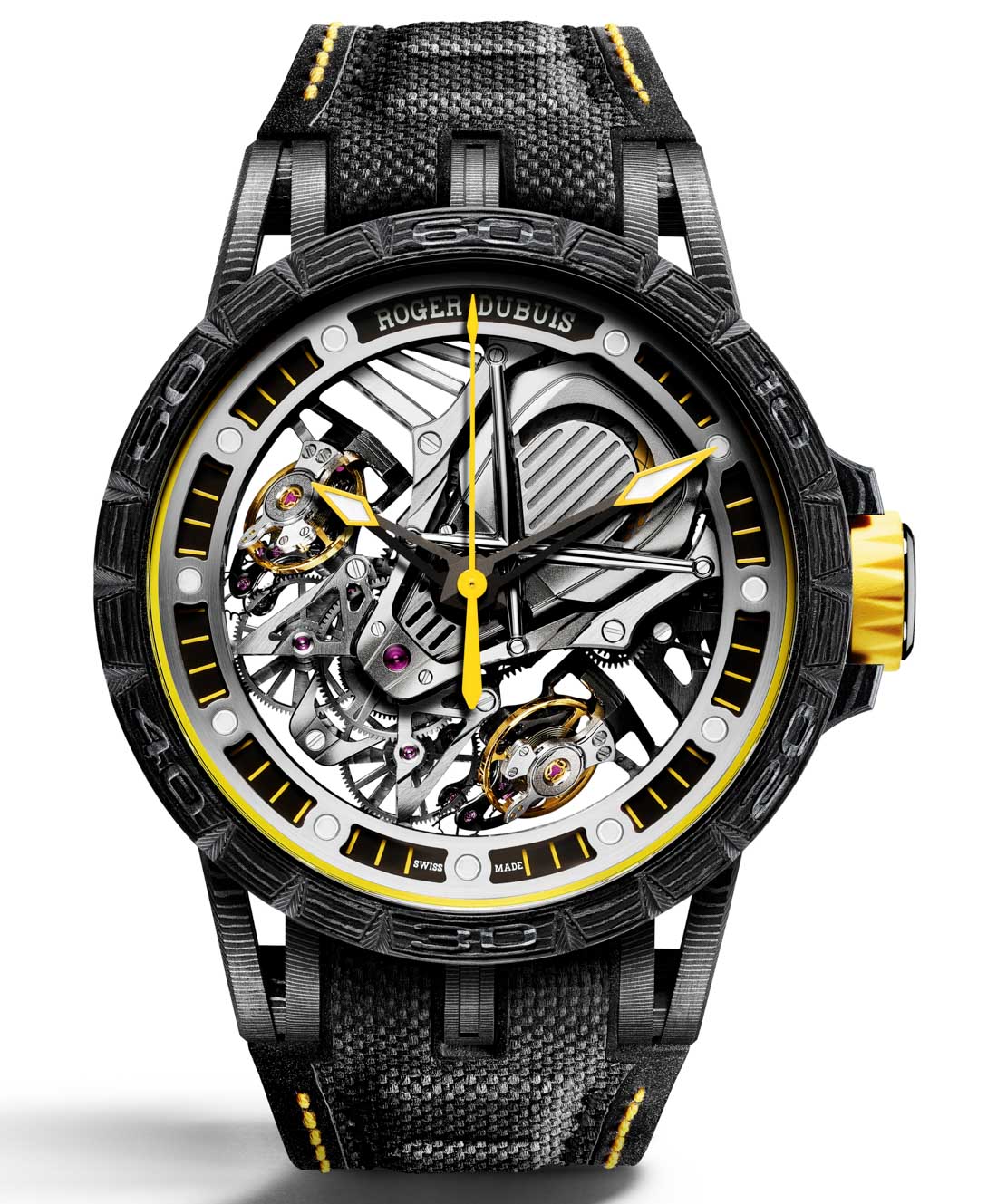 Roger Dubuis has just set off on what is a 5-year signed partnership with Lamborghini – with not much if anything to prevent them from continuing beyond this time frame. This should give plenty of time to both parties to create more pieces like this Excalibur Aventador S, watches that are designed from the ground-up as new and around the know-how and design DNA of both brands.

Price for the Roger Dubuis Excalibur Aventador S with the layered carbon (Reference Ex613) is $194,500, while any one of the 8 special C-SMC forged carbon versions (Reference Ex624) will run for $216,000. rogerdubuis.com