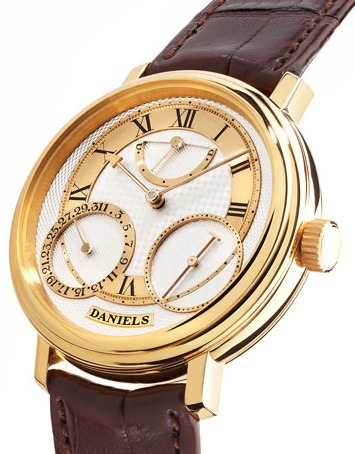 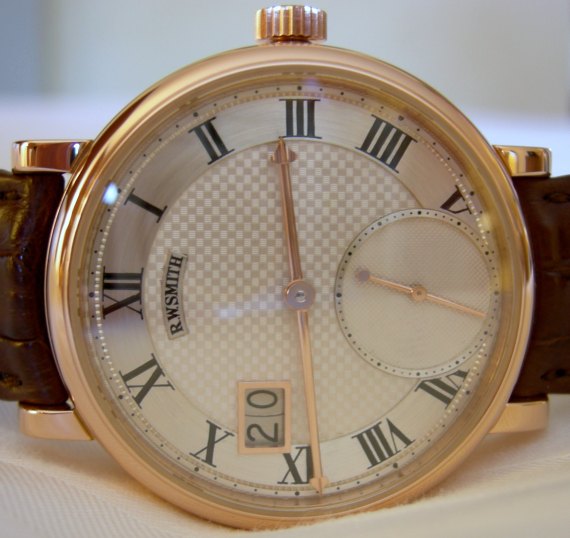 At the end of July, I had the special pleasure of spending a couple hours with Roger Smith as he swooped into Los Angeles to deliver the commissioned and bespoke Big Date Tourbillon that had been four years in the making.

I have a special interest in independent watchmakers and Roger Smith, who hails from England and still lives there–the Isle of Man, to be specific–happens to be one of whom I’m particularly fond. Most watchmakers do their schooling and then go to work for the brands to cut their teeth. Smith has never worked for a brand. He had a very personal watch education from the master of independent watchmaking, George Daniels. If you’re not familiar with Dr. George Daniels, he practically gave birth to the independent watchmaking movement. He’s known for his exquisite one-off pocket watches as well as his invention of the co-axial escapement. Yes, the one used by Omega. 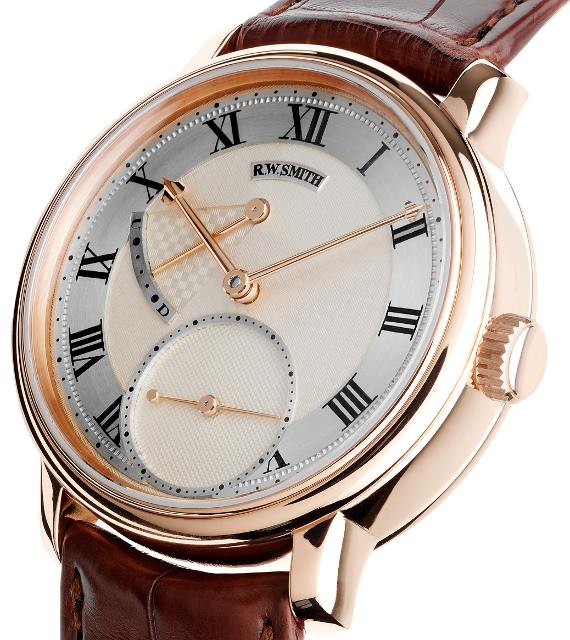 When Smith was in watchmaking school, Daniels came to the classroom and showed his Space Traveler watch to the students. That pocket watch inspired Smith to make his own at 19 years old. After 1½ years of toil, the young and enthusiastic Smith trotted off to show it to Daniels. Smith relayed that Daniels said the watch looked unmade and that it should look created. The styling wasn’t there and the watch wasn’t homogeneous. Start over, was Daniels verdict.

Rather than become dismayed by the master’s criticisms, Smith got invigorated. Smith’s next effort took five years to complete and in that time period, he remade the watch four times. At this point, Smith felt confident to show Daniels the results. Needless to say, Daniels was satisfied and asked Smith to work for him. For four years, Smith worked side-by-side with Daniels on the Millennium watch for Omega. A watchmaker couldn’t ask for a better education. 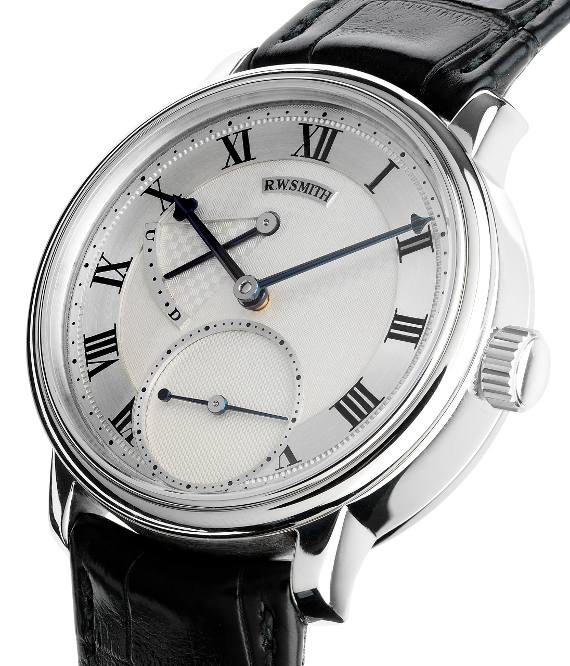 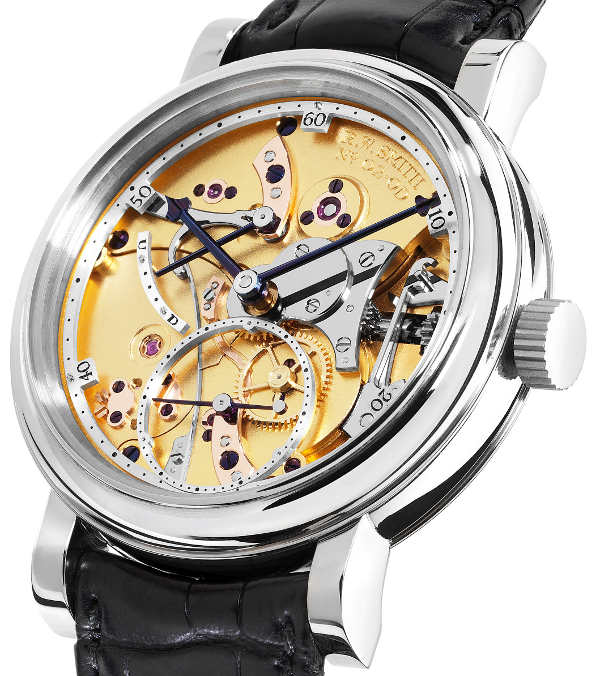 Smith doesn’t produce watches in the industrial fashion. In fact, he confesses he really wouldn’t know how. He literally makes and finishes all the components by hand in his workshop, with the exception of such things as balance springs, rubies and straps. Just like Dr. Daniels taught him. Smith even makes his own cases! By the very nature of a handmade watch you’re going to see mistakes and flaws, but Smith says that’s what gives them character and life.

What makes Smith’s watches so aesthetically interesting to me is the three dimensional nature of the dial and the movement. He’s currently in production on the Series 2 and now all the Series 2 come with a hand-engraved movement, which is really quite lovely and gives the decoration from behind extra panache. I got to hold and examine quite closely one with an open dial, as well as the Big Date Flying Tourbillon. I got lost in the balanced and thoughtful architecture. And the view is just stunning because Smith takes great pride in his finishing. Better yet, I don’t have to squint through a loop to enjoy it. That’s because Smith comes from the tradition of pocket watches, where you can appreciate the workmanship with the naked eye. He wanted to translate that experience into a watch, and I have to say he succeeded beautifully. 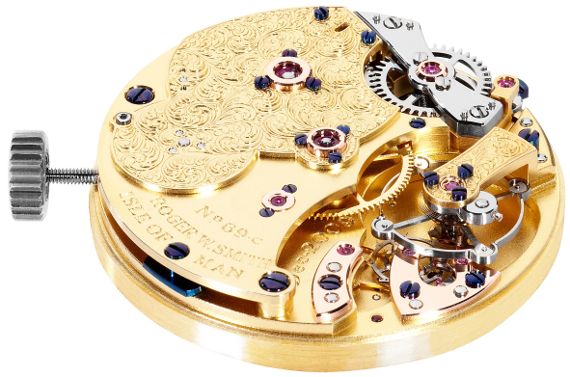 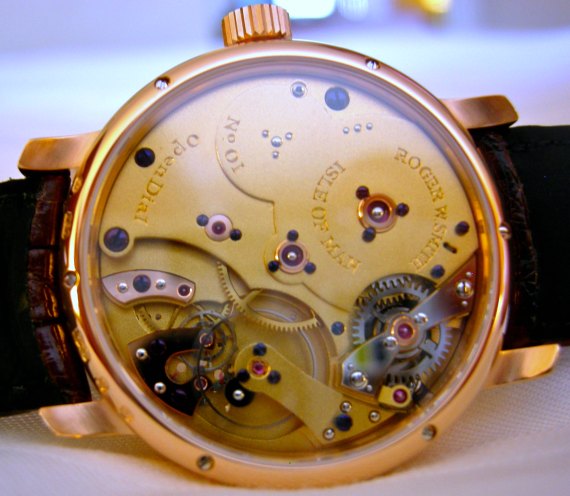 Don’t get the idea that Smith is walking step for step in Daniels’ shoes, though there are visual similarities in the two men’s watches. How could there not be? Smith was Daniels’ protégé, after all. Still, Smith has grown into an accomplished and confident watchmaker, establishing a style of his own. Characteristics of Smith’s work include a ¾ plate, jewels in gold chatons, a raised barrel bridge, silver dials, and hands sculpted from 18k gold or steel. Also, he hand engraves all the notations on the movement and the case.

With the amount of time put into each piece, Smith is only able to make 10 watches a year, but he plans to increase production to 30. However, his workshop is going to get a lot busier. A couple months ago Smith announced a collaboration with his mentor George Daniels. They are creating a series of 35 Anniversary watches to commemorate Daniels’ invention of the Co-Axial escapement, the watch representing a bookend to Daniels’ illustrious career.

The Anniversary watch is going to feature a new technical advancement developed by Smith. After working 12 years on the Co-Axial escapement with Daniels and in his own workshop, Smith came up with a way to improve the performance of the part. He combined the upper and lower wheels into one by adding raised teeth onto the lower wheel. The Co-axial escape wheel can now be made in one single operation, removing the potential for error by getting rid of a pivot point. 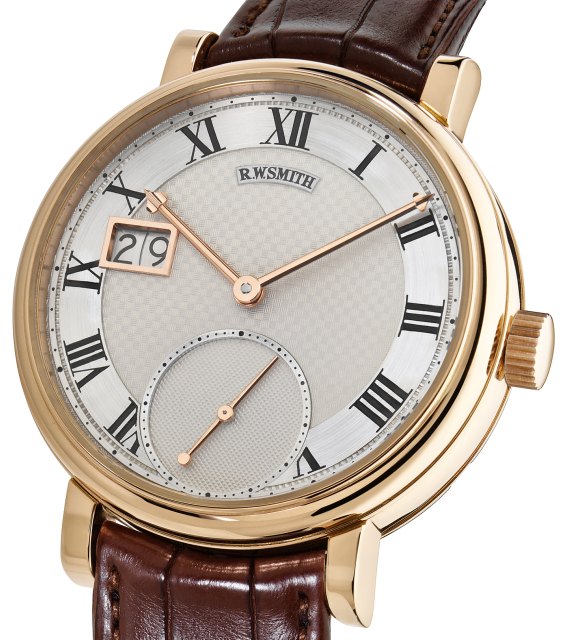 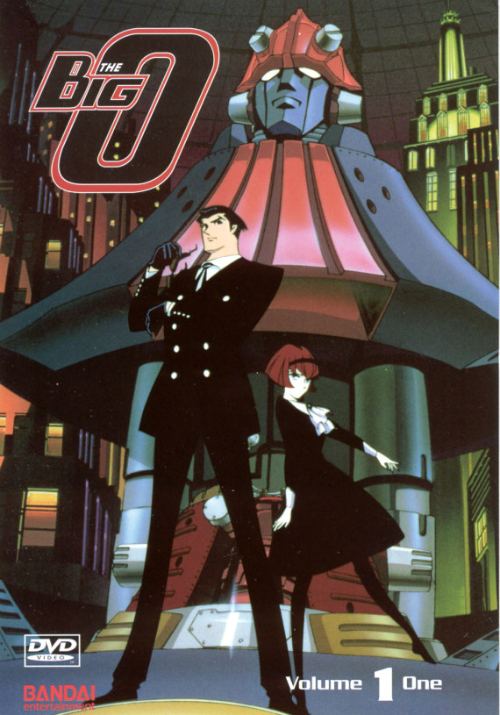 Getting all this history and know how in the Anniversary watch is coming at the hefty price of £142,000. The watch doesn’t have a tourbillon or a perpetual calendar either. It is a hand-wound movement that will display hours, minutes and seconds, power reserve and calendar. Obviously, collectors find the price reasonable because the series is almost sold out.

While Smith continues to work on the Series 2, which is an open edition limited by the nature of production, he has plans to increase his product range to between 6-8 key pieces in the next 5-10 years. He also will continue to take on commissions. Smith’s pieces start at close to six figures. The big numbers are enough to make anyone gulp or scoff at spending so much on a watch. But let me tell you, once you see them in person, it starts to be a love affair. At least it was for me.

If you are in a position to afford any of Smith’s handmade beauties, you will be getting a piece of the revived English watchmaking tradition. www.rwsmithwatches.com

[Ed. Note – the anime image near the bottom of the article is from a cartoon called “The Big O.” Why is it here? Because the main character (who is like a combo of Bruce Wayne and James Bond in a universe with big robots) is named Roger Smith, and has a cool watch that he uses to communicate with his mega mechanical robot.]
Advertising Message