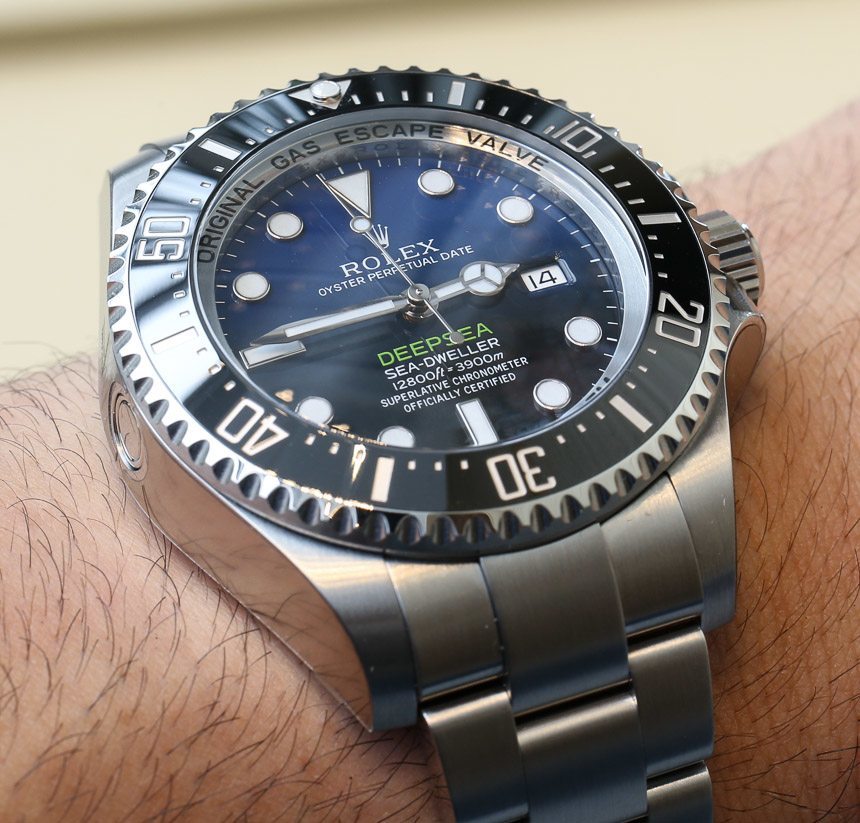 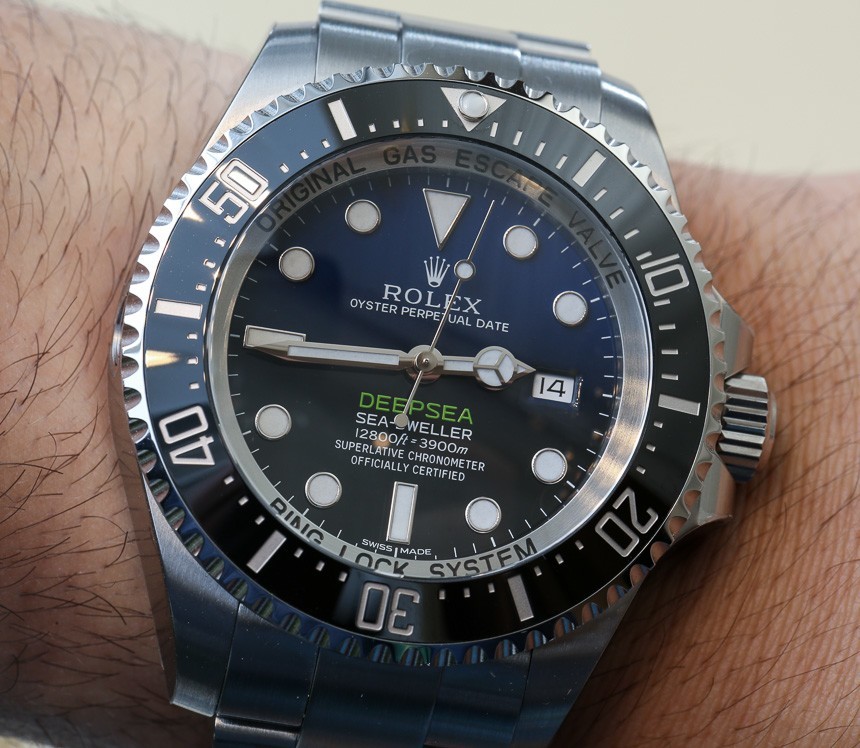 We previously mentioned that it was an oddity for Rolex to release a timepiece outside of their normal Baselworld watch trade show schedule. Rolex admits it was a unique thing for them to do, but praised the overall goal of the project and their desire to try new things. Rolex is a brand with an image so strong that many agree it is their main job is to preserve rather than promote. At the same time, any company interested in keeping the hearts and minds of its customers close must always offer something new. 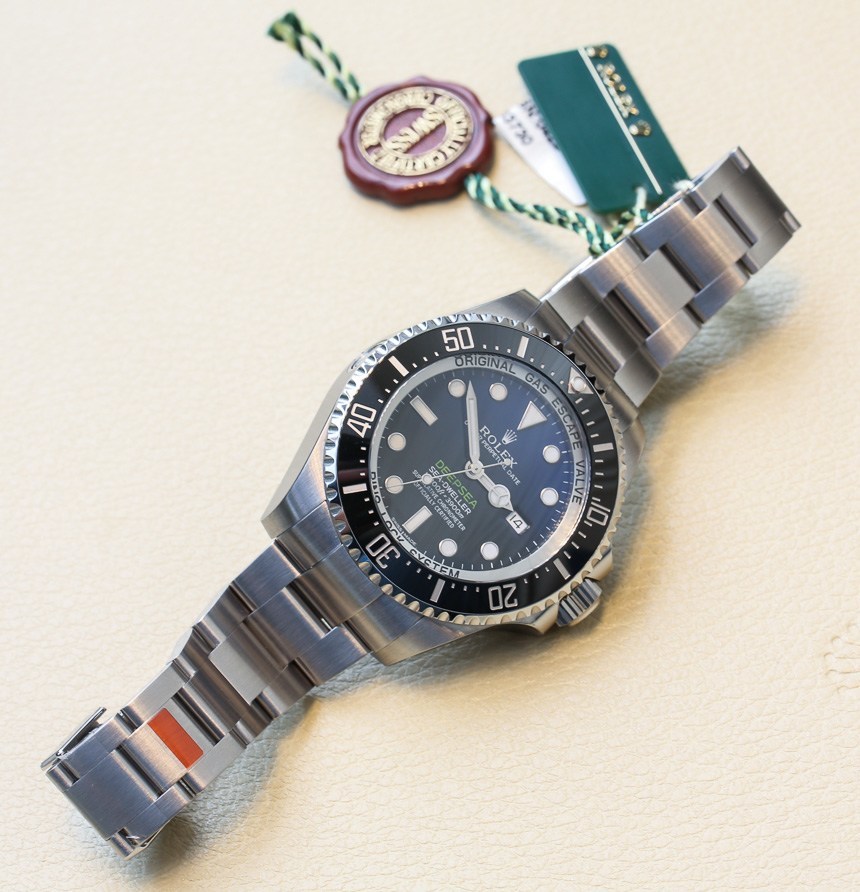 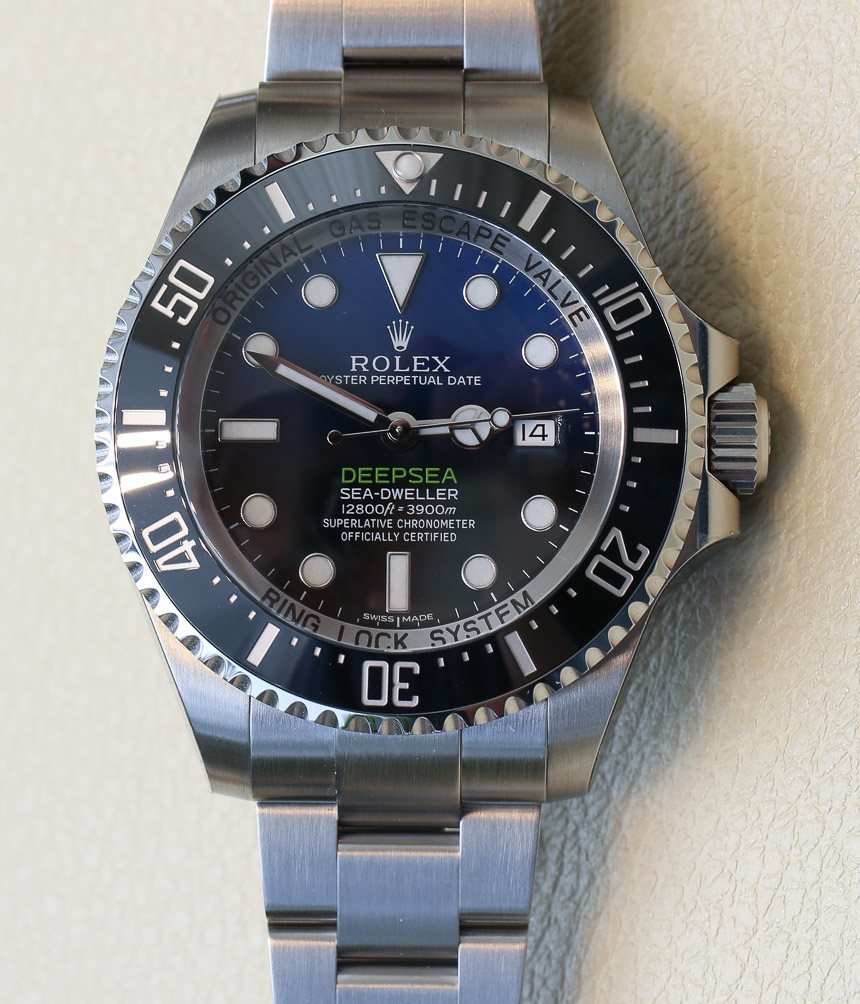 The Rolex Deepsea Sea-Dweller D-Blue watch (Deepsea D-Blue for short) is certainly new, but also very familiar – a running theme with most fresh things we see coming from “the Crown.” The dial is new, the theme is new, and the release strategy is new. What is the same is the Deepsea watch model itself, and as of right now, it still has the same “116660” reference number of the standard black dial Deepsea timepiece.

We’ve never really done a hands-on of the Deepsea before, so in addition to talking about the new D-Blue variant in honor of James Cameron, I’d like to discuss the Deepsea a bit in general. It is, in short, one of the more quirky Rolex Oyster Professional watches, but nevertheless highly desirable and lovable. 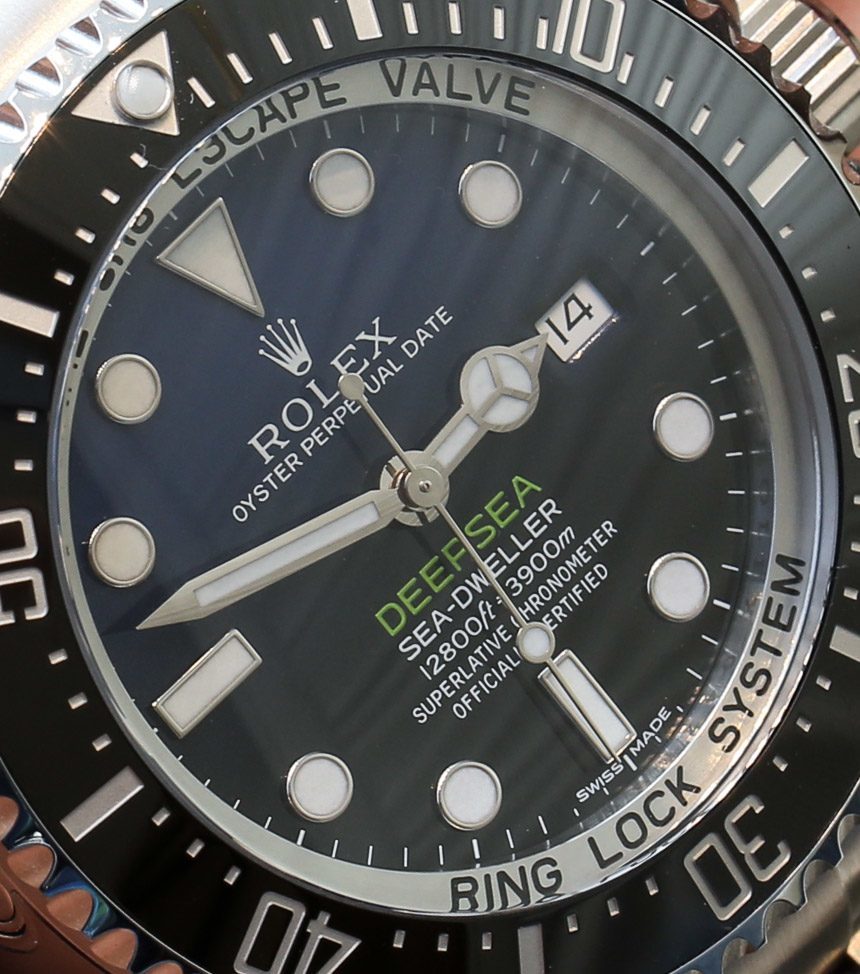 Let’s start by talking about the new D-Blue dial itself. As you know, the design of the dial is meant to mimic the voyage of James Cameron in his Deepsea Challenger submersible mission from 2012 (discussed here). The blue to black gradient of the dial is meant to resemble ocean water that gets black as you go deeper because sunlight can only penetrate so far. The green color of the “DEEPSEA” label is the same color as the Deepsea Challenger submersible. James Cameron himself is an avid watch lover and has been a Rolex guy for a while. His main watch seems to be a Rolex Deepsea.

It isn’t clear whether he suggested to Rolex that they make the Rolex Deepsea Sea-Dweller D-Blue dial or it was someone at Rolex who suggested it to Mr. Cameron, but the fact remains that this is the first time in Rolex history that anything like this has been done. Having said that, you need to be familiar with the events of 2012 and the release of James Cameron’s 2014 Deepsea Challenge 3D film in order to properly understand the watch in the future. Nothing on the Rolex Deepsea D-Blue dial watch itself at all directly references the film, the voyage, or James Cameron. Thus, it will be important for future collectors to understand all of this when wanting to know what the watch was all about. This is an important point because many brands who make a watch for a special event or occasion do not consider that people 50 years from now might have no idea what a product is all about unless it says so on the product itself. 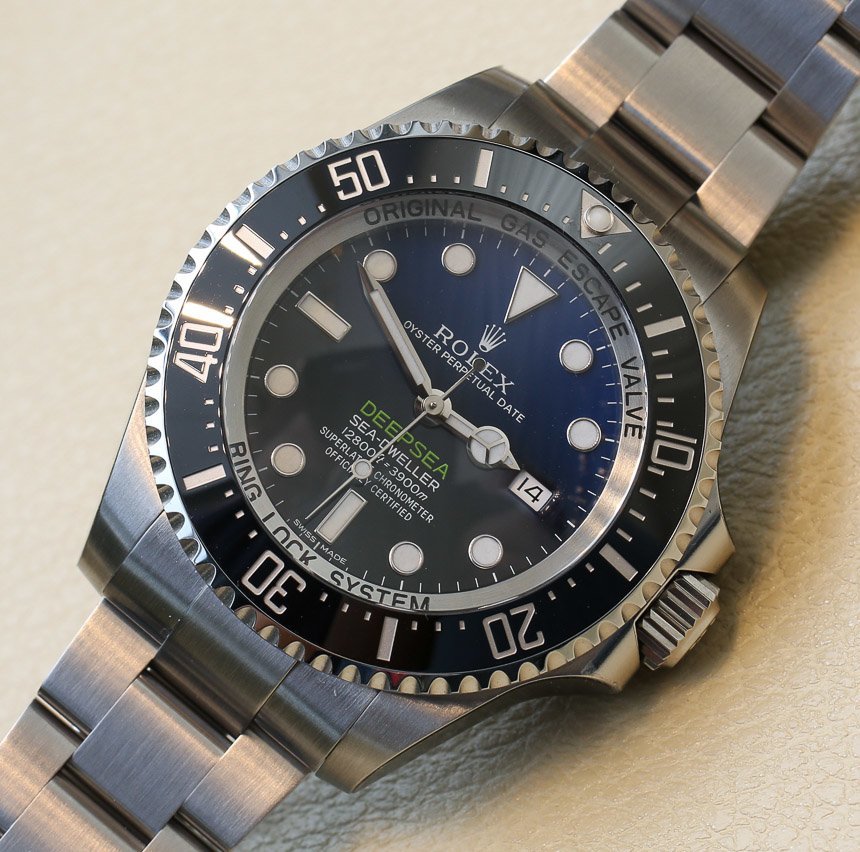 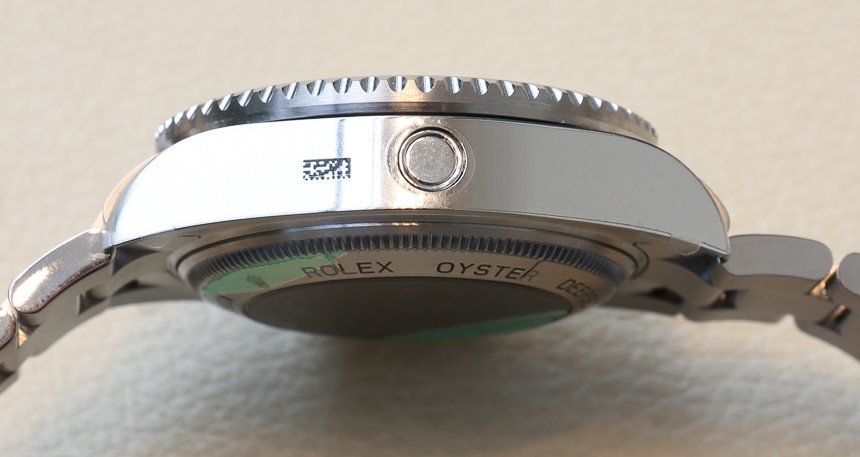 Rolex, of course, isn’t the type of company to put anything extra on their timepieces, so it is not really practical to expect them to put some sort of a unique design element on the watch to commemorate the event, but I figured it was worth mentioning. In a sense, collectors can think of the Rolex Deepsea D-Blue dial watch as a consolation to the fact that Rolex will not actually be producing for retail sale the massive Deepsea Challenge concept watch designed for the underwater mission that was water resistant to 12,000 meters. That is over three times the 3,900 meters of water resistance of the Deepsea, but it is designed like a super-sized version of the standard Deepsea. Rolex had just a few weeks to create the Deepsea Challenge concept watch and they only made about 5 or 6 of them.

The Rolex Deepsea Sea-Dweller D-Blue is currently the most high-performance dive watch that Rolex makes, as well as the largest in a thick (17.7mm) and broad (44mm wide) case. It comes on an Oyster-style bracelet and is made from 904L steel. The caseback of the watch is in titanium and it has a range of features that help offer the massive water resistance such as the Ring Lock System and the massive, 5 millimeter thick sapphire crystal over the dial. 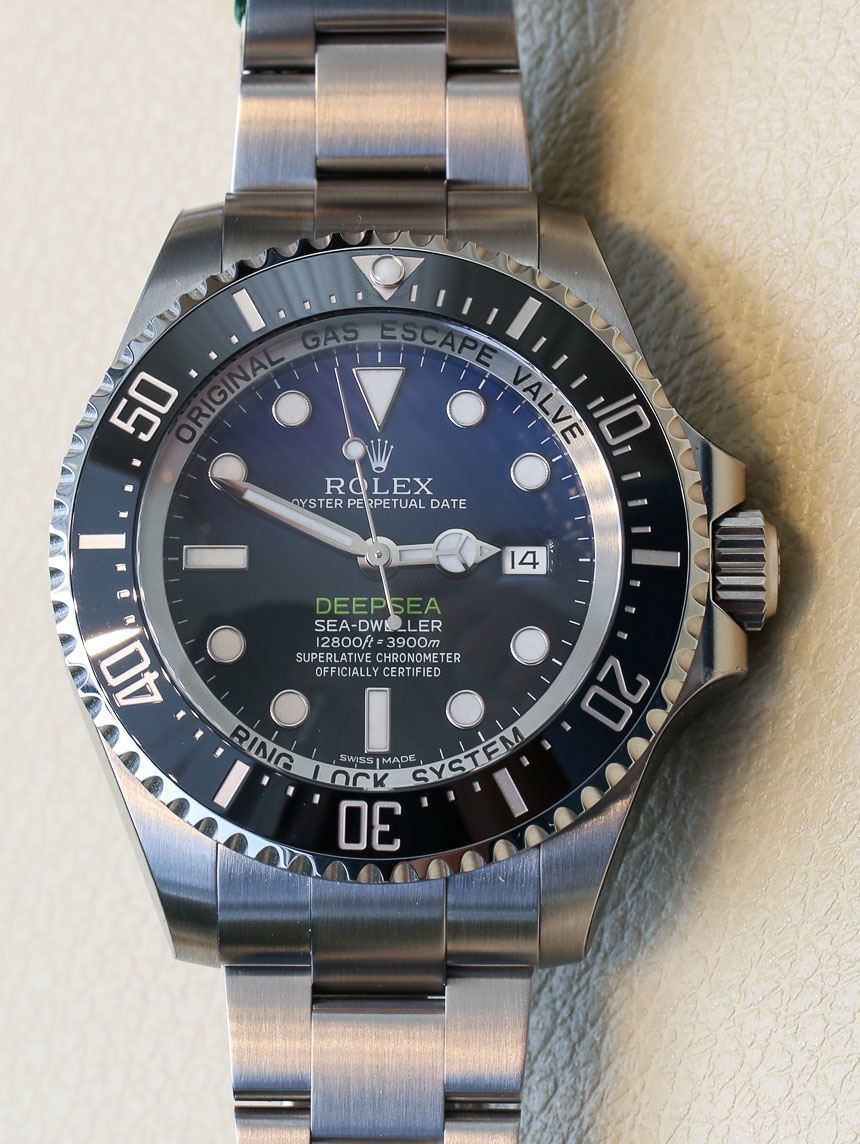