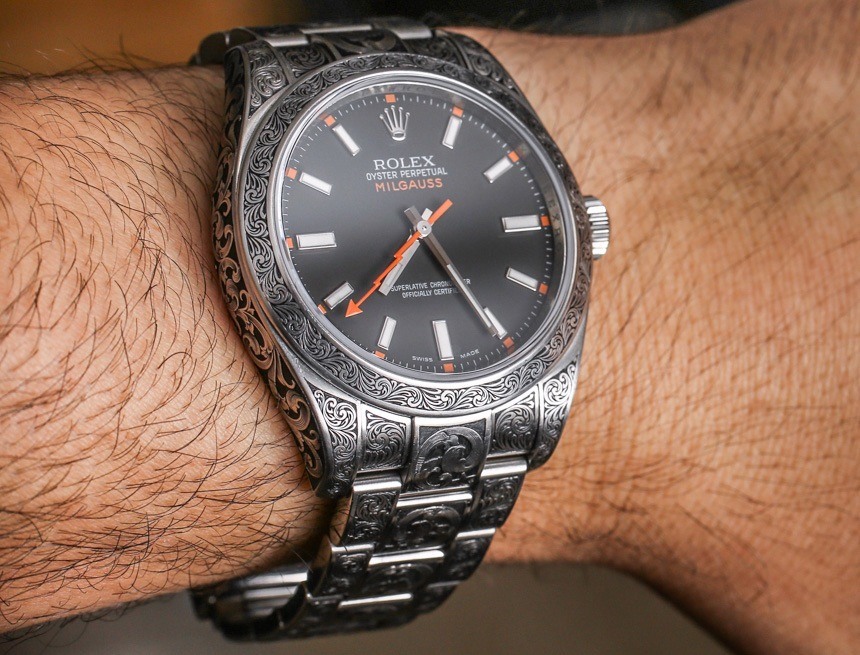 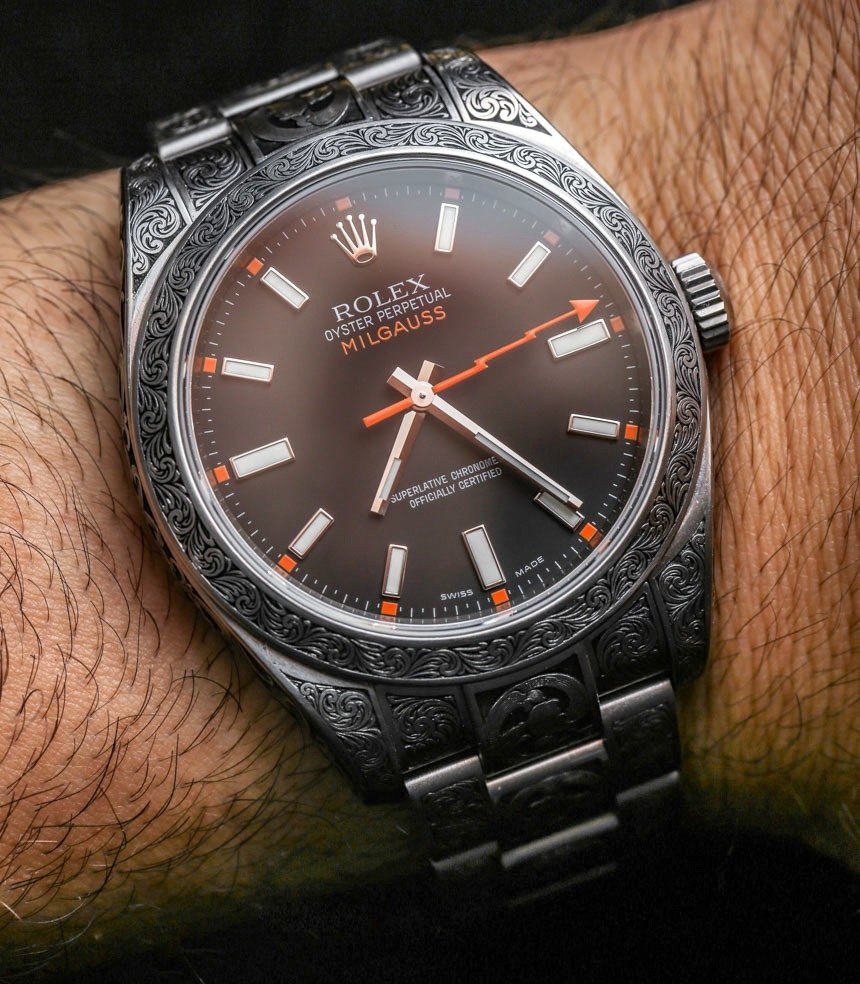 The Rolex Milgauss reference 116400 watch is a modern classic. Sporty and historic, this popular Rolex timepiece today serves as the slightly avant-garde, casual-to-dress watch evoking good taste, a focus on performance, and of course, a high station in life to the owner who is wearing it. aBlogtoWatch previously reviewed the Rolex Milgauss 116400GV here. This review, however, is for something a little bit different. This is a Rolex Milgauss which has been fully engraved in America under the MadeWorn label – so, in a sense, this is a review of a customized Rolex Milgauss watch. 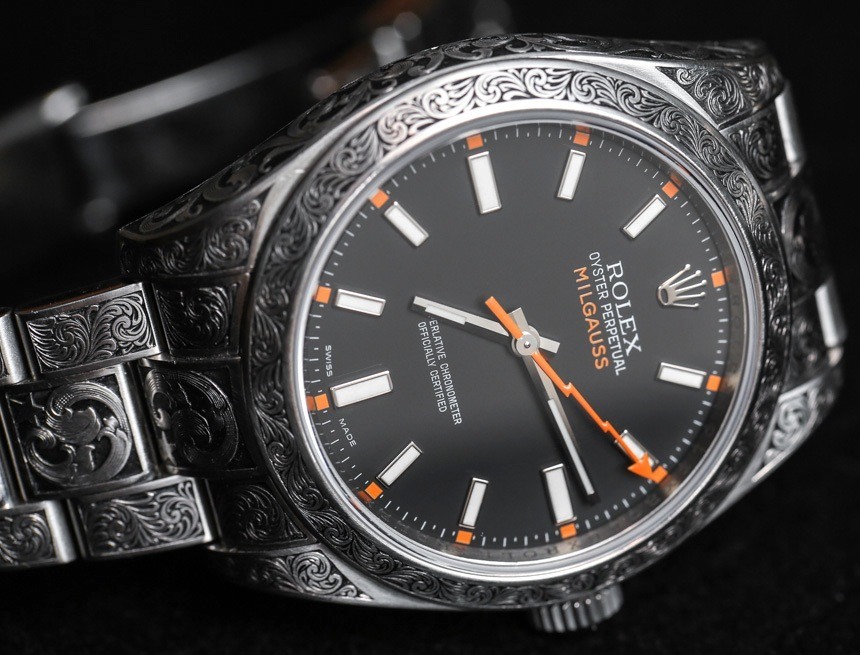 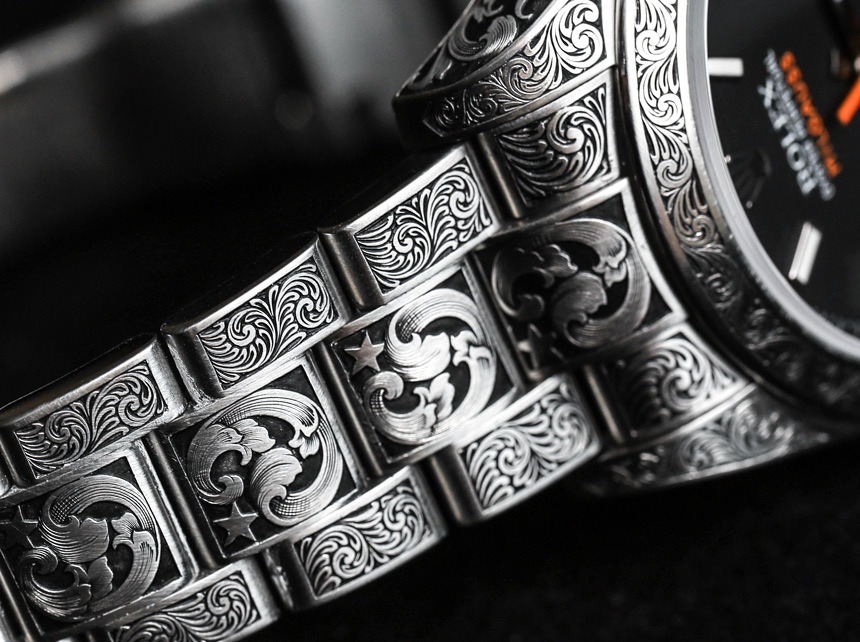 The fact that this timepiece is aftermarket-engraved immediately factionalizes watch lovers: on one side are those who see the modification of any Rolex as being sacrilegious, and on the other side are those who see this as a way of taking something extremely popular yet ordinary and making it a lot more exclusive and unique. You know what? They are both right. 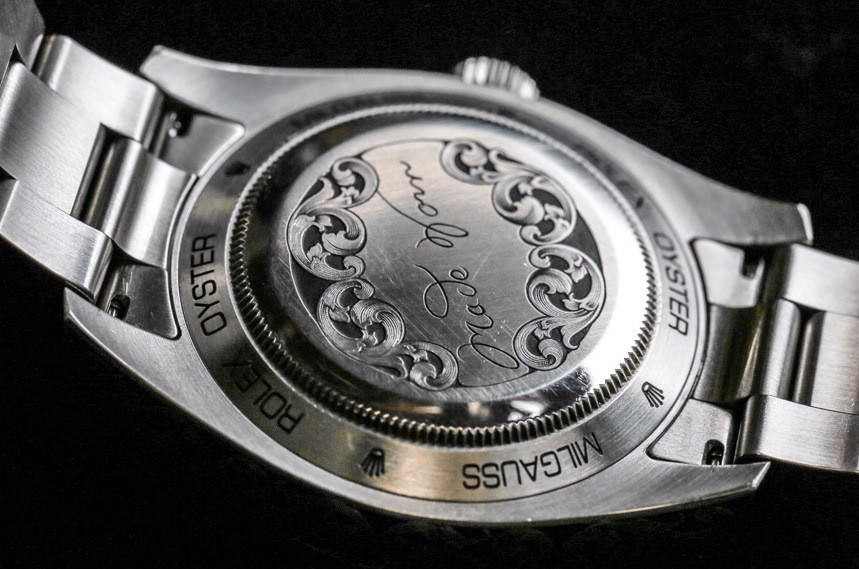 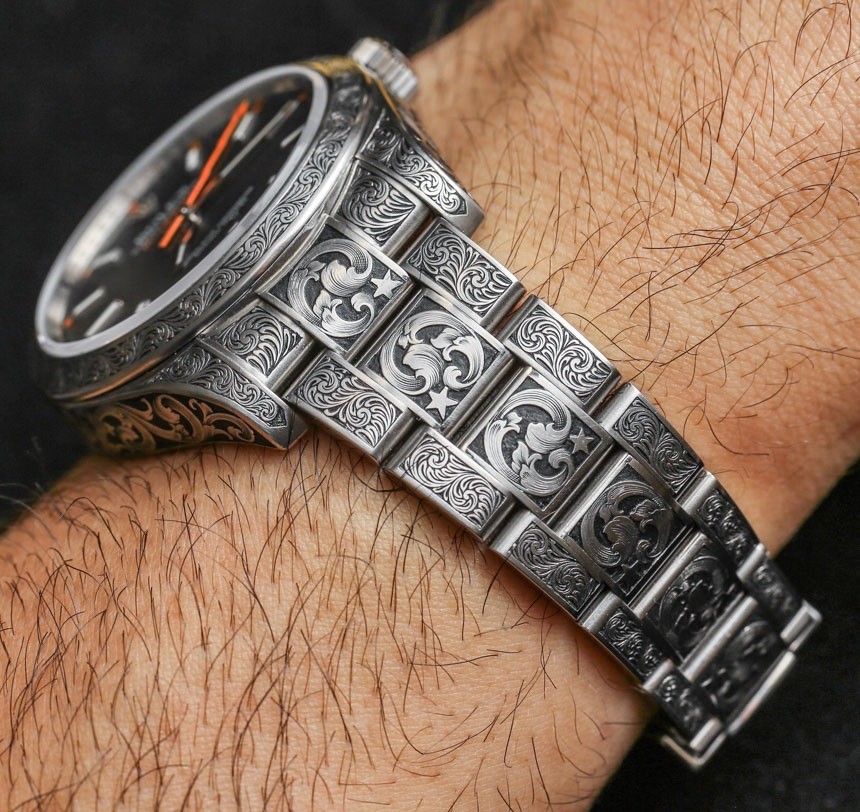 Buying a customized Rolex does not come without risk, but there are also rewards. First, for the most part, you invalidate any remaining Rolex warranty (which isn’t the end of the world – especially on a watch that is already out of warranty), and you also greatly risk inhibiting future resale value. Of course, that latter element really depends on the customization. Most customized Rolex watches today fall into two camps. One is aftermarket diamond or jewelry setting (though, I always recommend factory stones from Rolex since they can’t be beaten), and the second is color or design changes to the Rolex case and dial. This is where something like a Bamford Watch Department or Project X Rolex watch comes in. 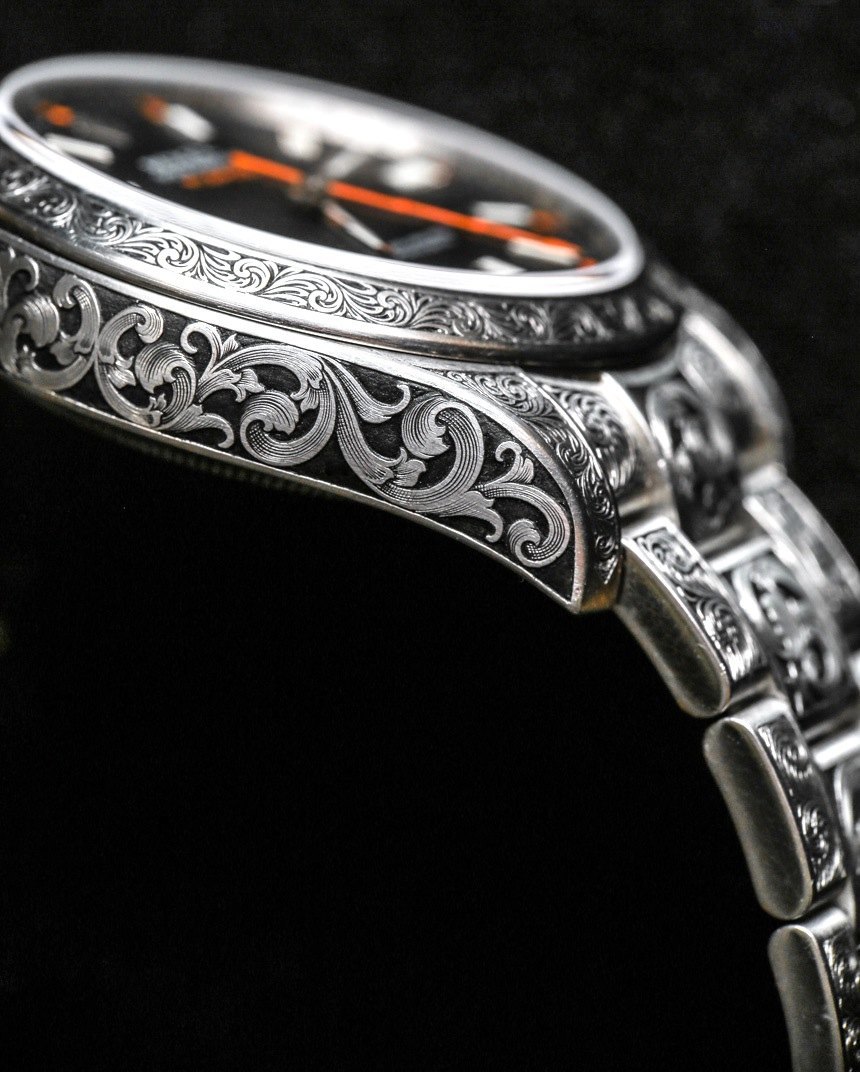 This MadeWorn customized Rolex Milgauss is different, making it among the less-common types of customized Rolex watches. Aftermarket watch case engraving is out there, but it is rare – and one of the major reasons for that is that there simply aren’t too many engravers who can do this type of work satisfactorily. If anyone knows this fact, it is MadeWorn founder Blaine Halvorson, who began the brand after selling his company JunkFood Clothing several years ago. Halvorson now runs MadeWorn out of its private studio and appointment-only retail space in West Hollywood – where, among other things, he continues to personally make shoes and clothing by hand. 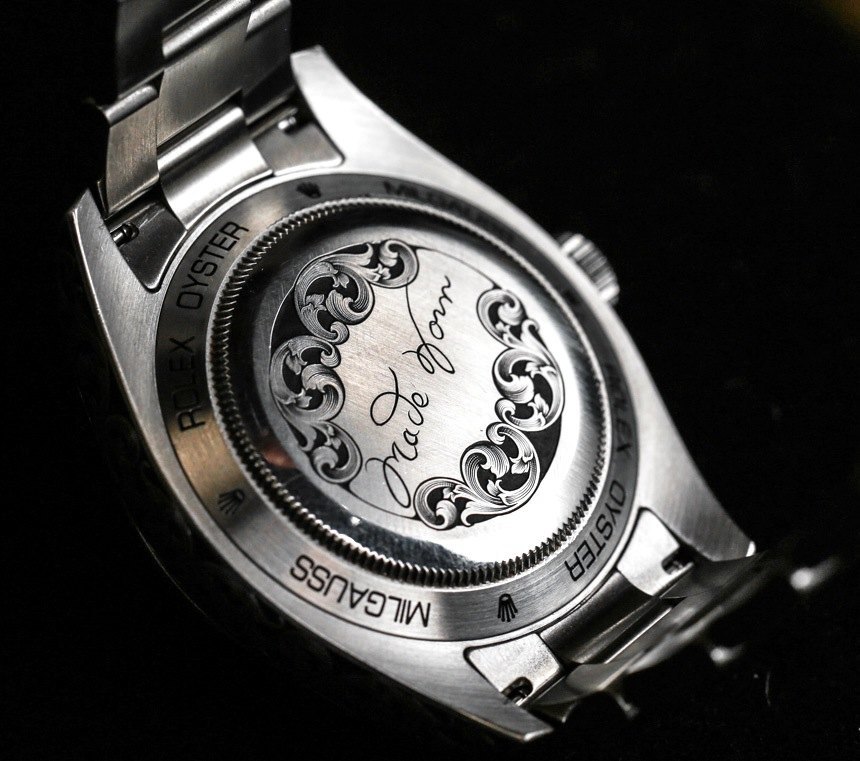 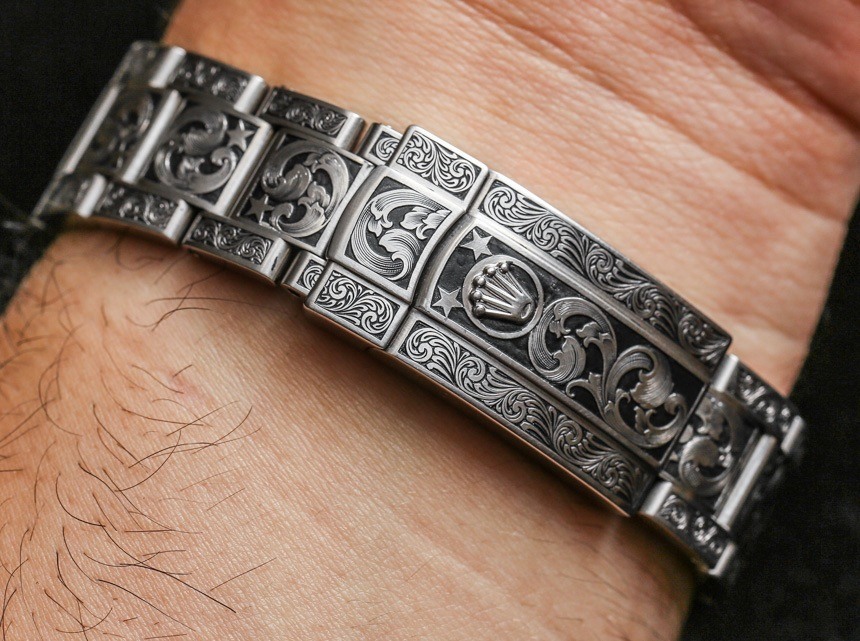 One of the most interesting parts of the MadeWorn brand is the very literal meaning of their name in what much of their work entails. If you recall a decade or so ago there was a big to-do in the fashion world about artificially aged clothing such as t-shirts and jeans, where fashionistas would pay premiums for new items of clothing meant to look old but that were actually new. Why pay extra for someone tearing your jeans? Well, there is actually a good reason. Blaine and his crew have utterly perfected the art of making new things look old. This doesn’t just apply to clothing, but to other things such as books and household items. The brand makes a range of things from knives to bags, all with the brand signature look which seems to blend classic masculinity with American vintage nostalgia. This makes sense for a guy covered in tattoos originally from Bozeman, Montana, who, despite his success and fanatical following, continues to get his hands dirty (often very dirty) on a daily basis. 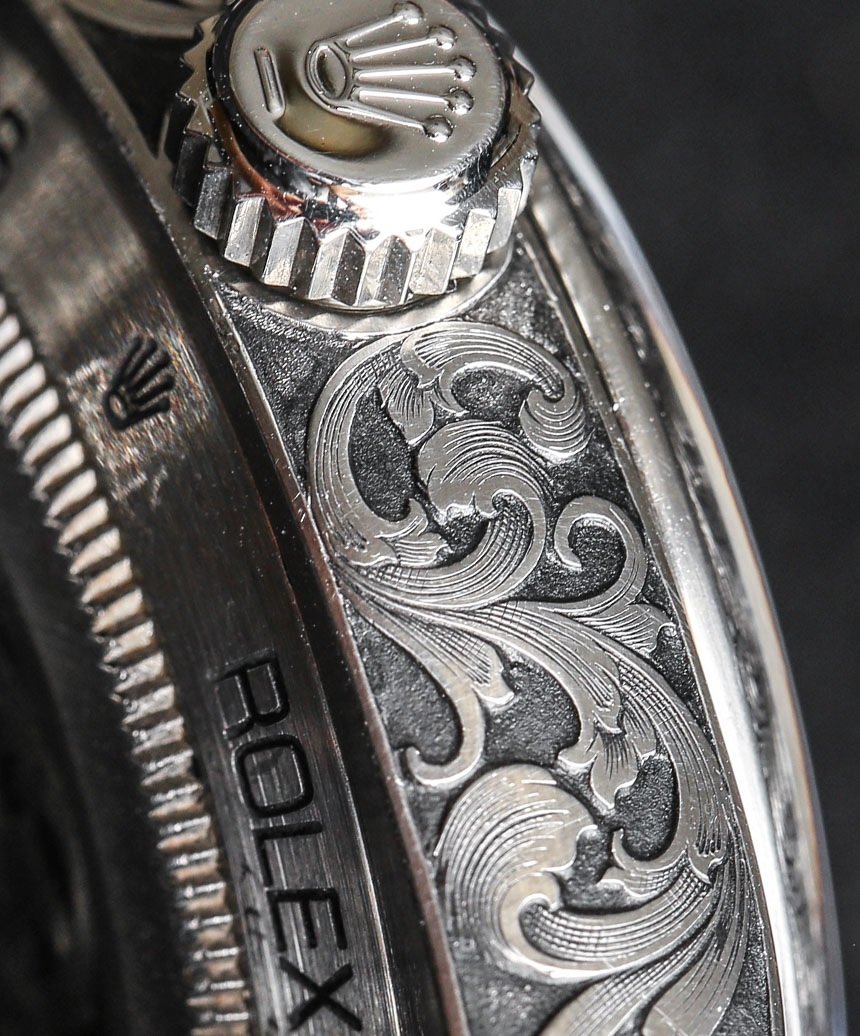 I was fortunate enough to debut the first engraved Rolex watches offered by MadeWorn on aBlogtoWatch here earlier in 2015. Produced and conceived individually, Blaine personally selects mostly Rolex watches and then delivers them to his private network of professional gun and knife engravers who live in various parts of the United States. While Blaine can do many things, engraving watch cases is not one of them – though he does have an eye for good work. According to him, most engravers, even if they think that can do a watch case, typically can’t. Part of his value as the middleman between customer and engraver is making sure the final product is top notch and that it is aesthetically on par with his tastes and expectations. 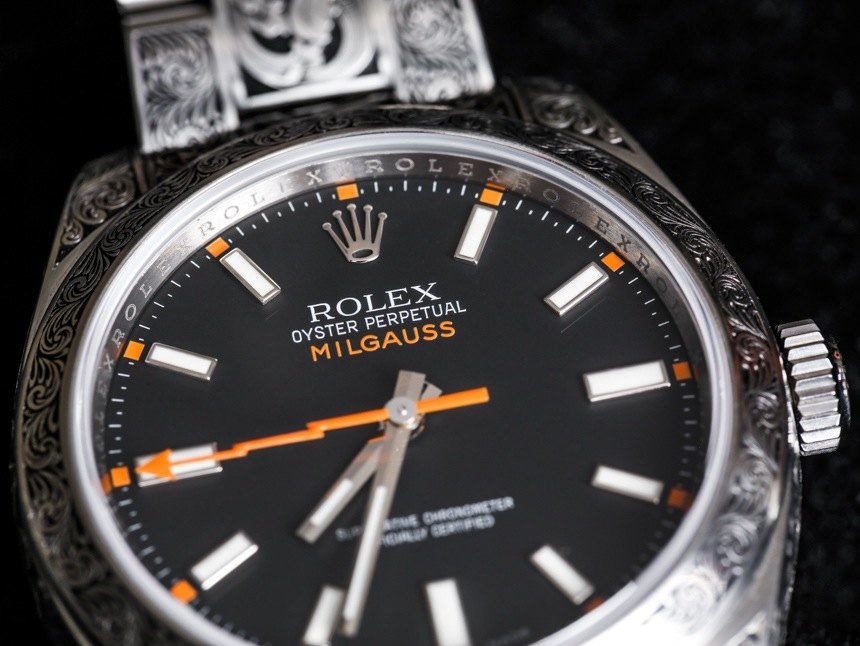 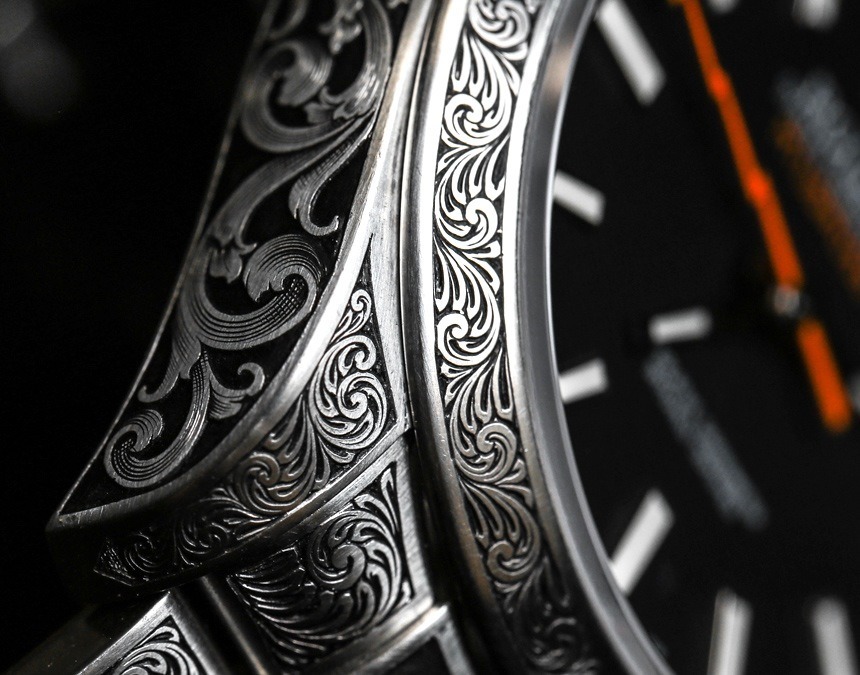 While MadeWorn specializes in making new things look old, that obviously isn’t his tactic with watch customization. Instead, his tactic is to give these Rolex and other watches some “old character,” allowing them to exist in the world of high-quality tools men used to covet, such as their hunting equipment. There are lots of collectors out there who enjoy timepieces along with knives and guns – so this fits right into that mentality. In some ways, this MadeWorn-engraved Rolex Milgauss 116400 is Blaine’s vision of what the timepiece would look like if it was made 150 years ago. 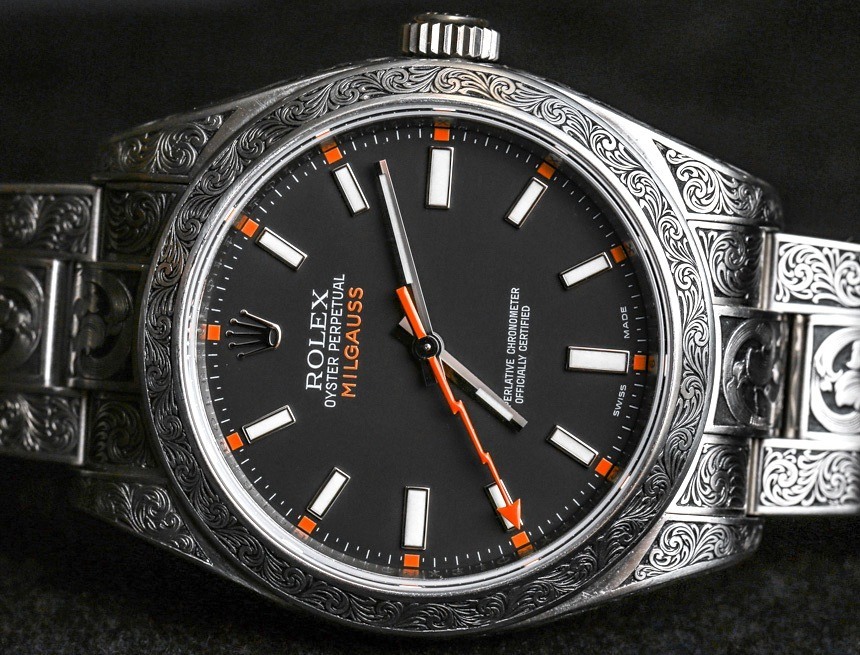 I personally love the artistic integrity and how it takes something so universally appealing and makes it a bit more interesting. Engraving a Rolex doesn’t make it better, it makes it unique. That means the people doing it, as well as the people wearing it, need a strong personality and a desire to wear something that they know not everyone will like. Everyone I’ve shown this engraved MadeWorn Rolex Milgauss 116400 to agrees the work is excellent, but a few people don’t find it attractive. Of course, that makes sense, as this is a highly stylized look (that is sort of the MadeWorn point) which isn’t going to appeal to everyone. With that said, if you like the look of gun-style hand-engraving, I simply can’t see you being disappointed with this timepiece. 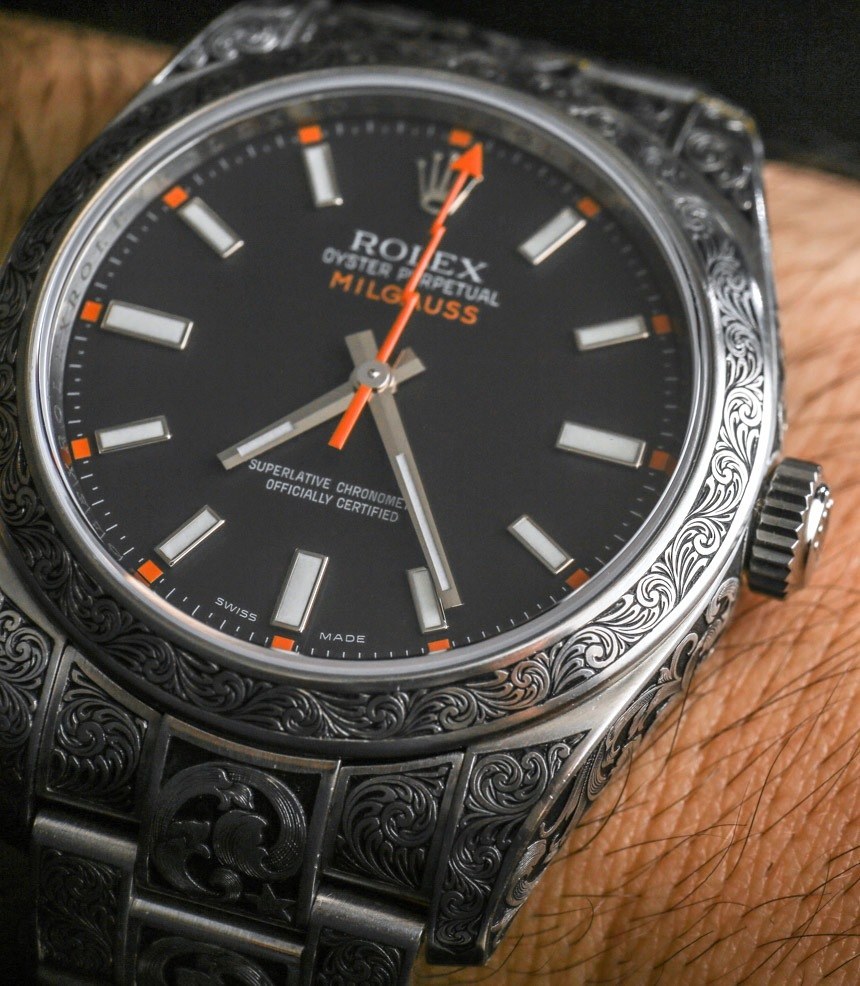 One thing that really makes this engraved MadeWorn Rolex Milgauss 116400 watch for me is the fact that it is such a nice timepiece underneath to begin with. For instance, if the rest of the watch were themed in the same vein as the engravings, this would be a totally different watch. I am not saying that it would be better or worse, but it would be totally different. I also like that this is a modern Rolex Milgauss and not a vintage piece – so you have this combination of something that looks very new with something that has a more retro-feel to it. 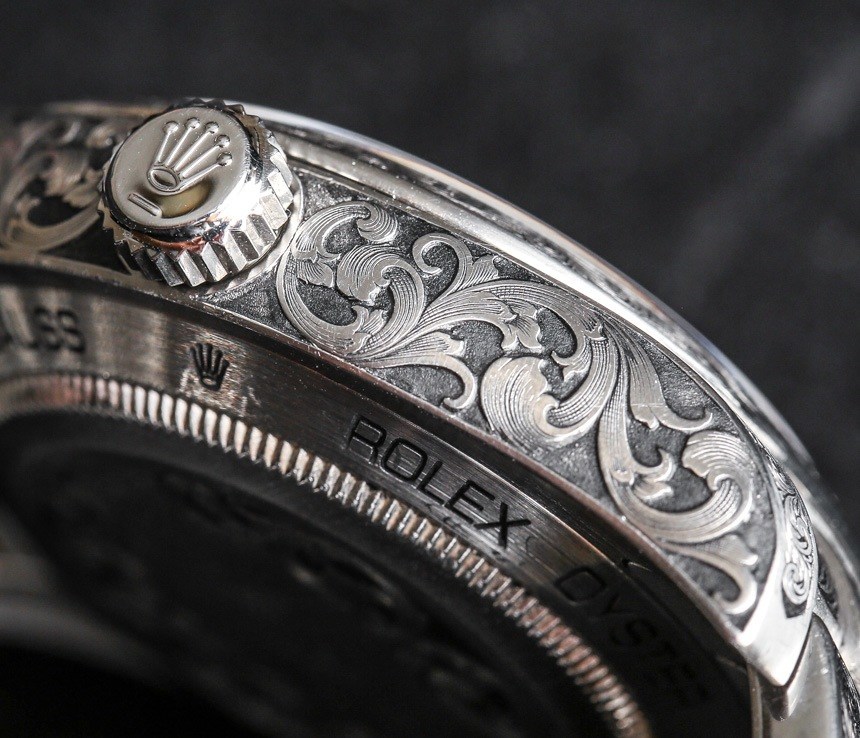 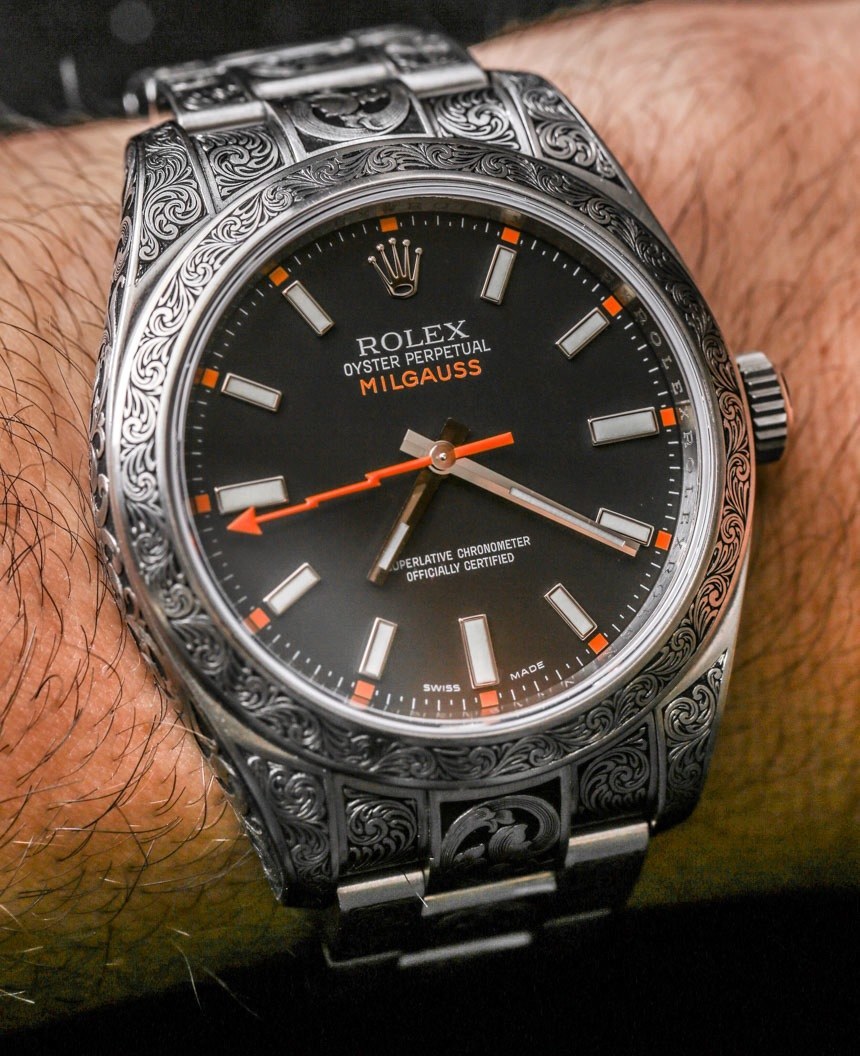 The basic Rolex Milgauss 116400 is a fine watch that probably doesn’t require too much introduction. MadeWorn went with a slightly older model Rolex Milgauss produced before they introduced the green-tinted sapphire crystal for this model, making it the 116400GV. The Rolex Milgauss is Rolex’s “engineer watch,” with its built-in resistance to magnetic fields, which has today become the “dress watch for the thinking man.” At least, that is one way to put it. At 40mm wide in steel, the Rolex Milgauss is most often identified by its cool and distinctive orange-colored “lightning bolt” seconds hand and otherwise clean dial. 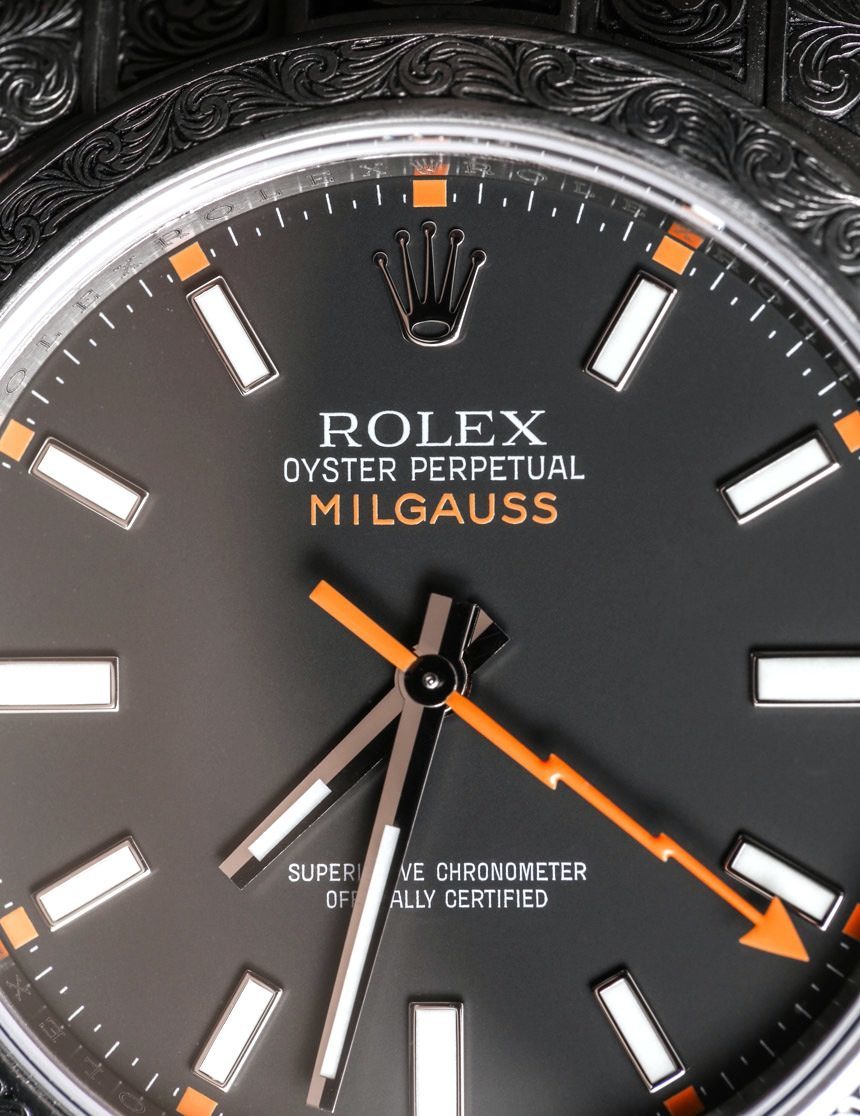 With a simple polished bezel, Rolex removes a lot of the lifestyle element, making the Rolex Milgauss one of the most humble watches they make that, nevertheless, has a great personality. Inside the Rolex Milgauss 116400 is the in-house-made Rolex caliber 3131 automatic movement which is shielded by an iron core in order to prevent it from being effected negatively by magnetism (which would either break or effect the timing performance of the movement). The simple three-hand automatic makes for a great daily wear, and the 40mm-wide size makes the Rolex Milgauss 116400 really versatile.