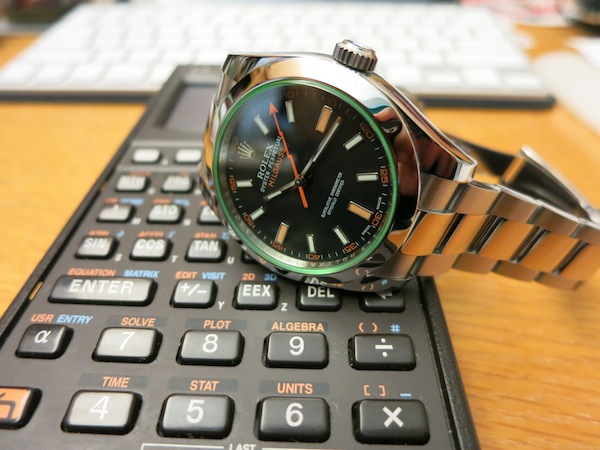 As a research scientist with a passion for fine timepieces, I have always been on the lookout for the watch that would best match my work and life passions.  If you also fit that category, then look no further than the Rolex Milgauss, and especially the unique anniversary edition reference 116400GV (“glass verte”) with the green sapphire glass.  It is a watch with a unique history that stands out from an all too common Rolex lineup and that was designed for scientists…  Let’s explore why that is.

While I will not give you a full history of the Rolex Milgauss, I want to brush on the important highlights.  The Rolex web site and various blog posts do a thorough job of documenting the history, in particular this post is one of the better ones I have found on its history. 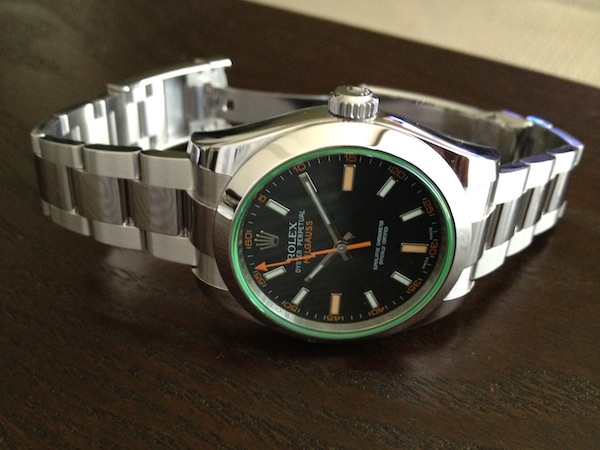 In a nutshell, the Rolex Milgauss was introduced in the late 50’s when electricity, electronics, aeronautics, and nuclear engineering was bringing about what we now call the technology and information revolution.  As a species, we had just discovered the power of the atom, we were finally in a position to leave mother earth (albeit for short periods of time), and the amount of innovations around transmitting, storing, and transforming information, created a series of revolutions that would forever change mankind.

As a consequence of this flood of innovation, scientists (and generally everyone) were increasingly being exposed to magnetic fields.  Not only from the instruments used but also from everyday appliances such as TV sets, radios, and the many new electrified appliances that were making their way into households.  You don’t need to know Maxwell’s equations to know that an electrical current and a magnetic field are two sides of the same “coin” and that one can easily be converted into the other.  The German mathematician and physicist Carl Friedrich Gauss was one of the first to explore this space and thus, in his honor, the measure of magnetic flux density is a Gauss.  Today, other measurements like the Tesla and ampere/meter (1000G = 0.1T = 80,000A/m) are more commonly used. 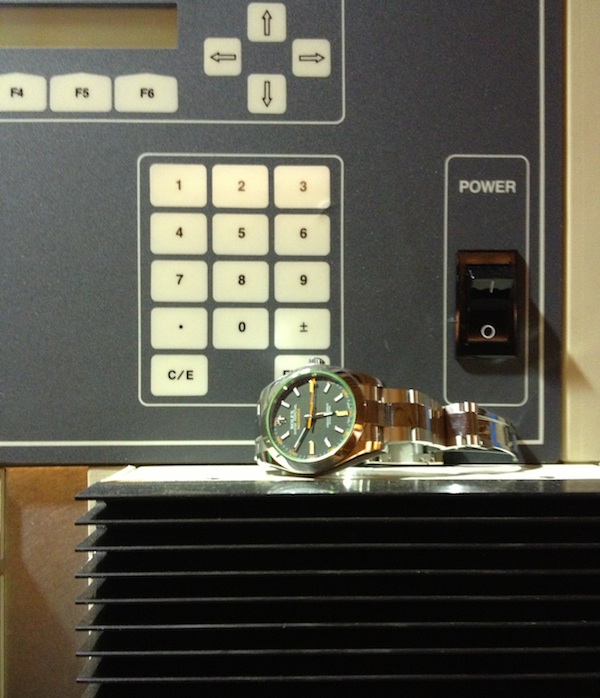 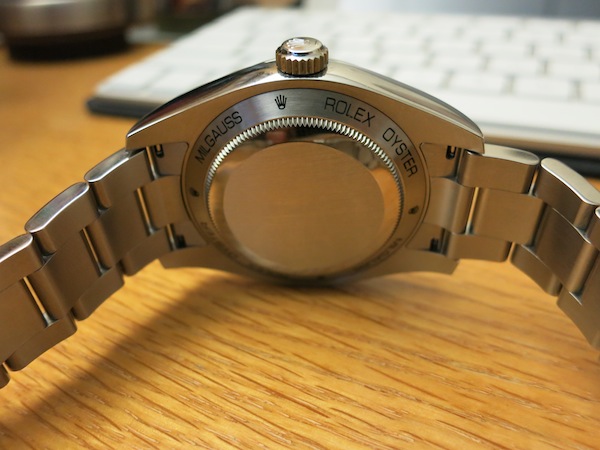 Of course, the result of being exposed to so much accidental or intentional magnetic fields is that anything you have on you that is sensitive to such fields will be affected.  You also don’t need to know much about the inner workings of a mechanical watch to realize that a magnetic field is one of its sworn enemies.  Briefly, mechanical watches (even the best ones) use a balance wheel containing a hairspring that is used to regulate the movement, it’s the watch’s heartbeat, if you may.  Mess with the hairspring or balance wheel and you will end up with a watch that runs too fast or too slow…  Therefore, in situations where the watch is exposed to a magnetic field, components of the watch can be magnetized and thus be disrupted.

It is in this context that various manufacturers started exploring how to achieve watches that could resist such fields.  IWC was the first to release a widely available watch resistant to magnetic fields with its aptly named Ingénieur model.  Not to be outdone, in that same time-frame, Rolex also released its own magnetic-resistant watch: the Rolex Milgauss (from the French “mille” and Gauss, thus resistant to 1000 Gauss).  James Stacey recently covered a set of newly announced Ingénieur pieces by IWC, to be released in 2013: the year of the Ingénieur for IWC. 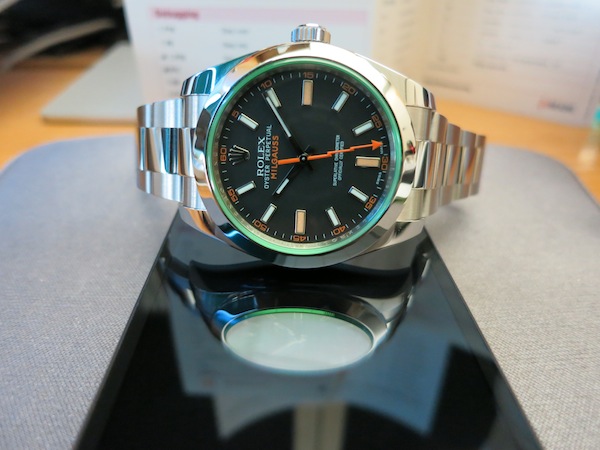 The basic innovation in both the Rolex Milgauss and the IWC Ingénieur and other such watches is the use of a Faraday cage that encloses the movement.  Similar to how being inside an airplane protects you from the effects of lightning, a Faraday cage (ferromagnetic enclosure) around the movement will divert a current or magnetic field and shield and protect the entire movement, including the balance wheel and its hairspring.  While being a great innovative step in watchmaking, there is much more to the new Rolex Milgauss than simply a Faraday cage. 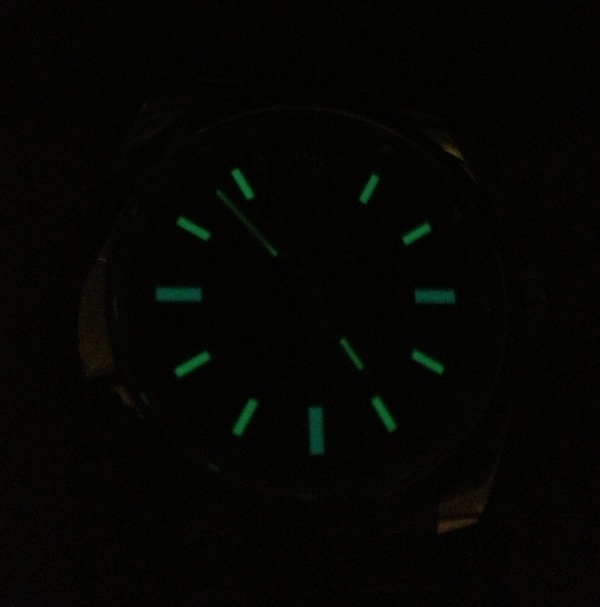 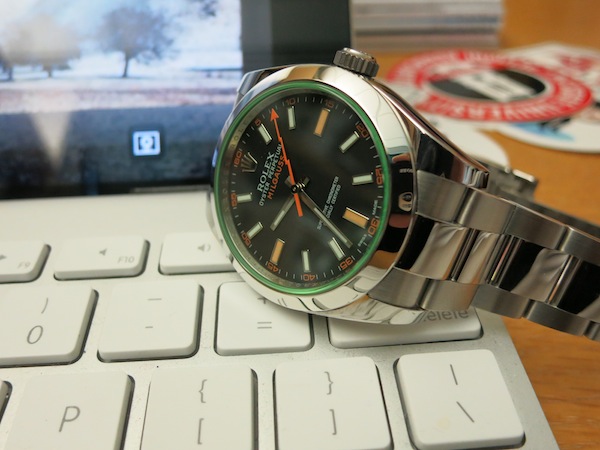 The lack of a date cutout also results in what is a simply awesomely symmetrical dial; which is easily one of my favorite aspects of the Rolex Milgauss.  First, the dial is black with simple baton-like hour markers filled with white Super-Luminova that shine green, though the markers at 3, 6, and 9 are orange-filled and shine blue.  At twelve o’clock is a large Rolex coronet underneath which the Rolex Milgauss model is marked with the common Oyster Perpetual.  The hour and minutes hands are similar to the Datejust model and are made of white gold with a thin strip of the white Super-Luminova.  On the periphery of the dial is the now common ROLEX ROLEX (…) and unique serial number (at 6 o’clock) laser etched markings which helps with counterfeiting and gives the dial a certain genuineness… 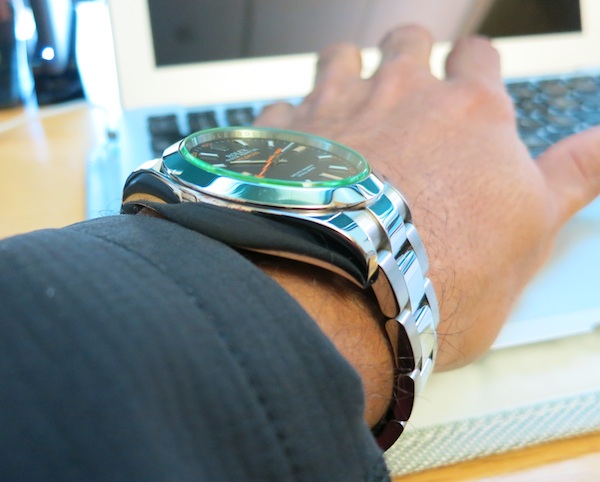 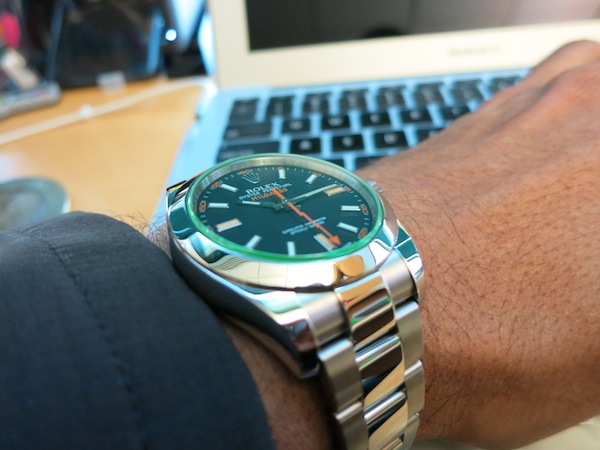 But perhaps the best aspects of the dial are these two subsequent features.  First, the seconds hand on this watch is the completely unique lightning bolt hand that is painted orange.  The color contrasts perfectly with the black dial and also matches the discreet seconds markings around the dial (also in orange).  And second, to complete the case, the dial is covered by the uniquely colored crystal matching the corporate colors of Rolex.  The crystal is perfectly transparent with hints of green that never overpowers and seem to change intensity depending on the angle you look at the dial or how light is reflected on it.  Finally, while you would not think that orange and green would work well together, it does so in this case in spades… and this is coming from someone whose color preferences tends to be conservative (read, black and white). 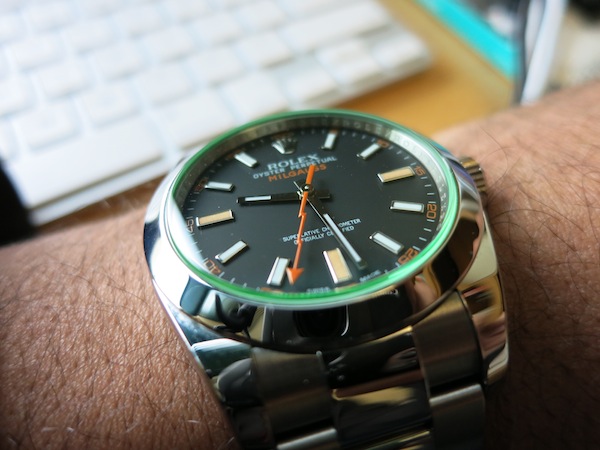 The Rolex Milgauss case is 40mm with lug to lug measurements coming at mere 48mm.  As a result, the watch wears rather small which also means that it will fit most guys.  For me, unless I previously wore one of my larger watches, the 40mm case does not bother me.  Also, because the Rolex Milgauss weighs in at just under 150 grams, any smallish feelings tend to disappear quickly since you can definitely feel that you are wearing a heavy and solidly built timepiece.  The bracelet is of the same steel with polished center links.  The adjustment of the screwed links is easily done and the bracelet size can be further slightly adjusted in a breeze with the Easy Link.  This is a wonderful Rolex innovation that I often use.  Essentially, it allows the bracelet to grow or shrink by 5mm in a few seconds by simply opening the clasp and pulling on one end to release the easy link, or folding it to hide it.  The whole thing works simply and brilliantly. 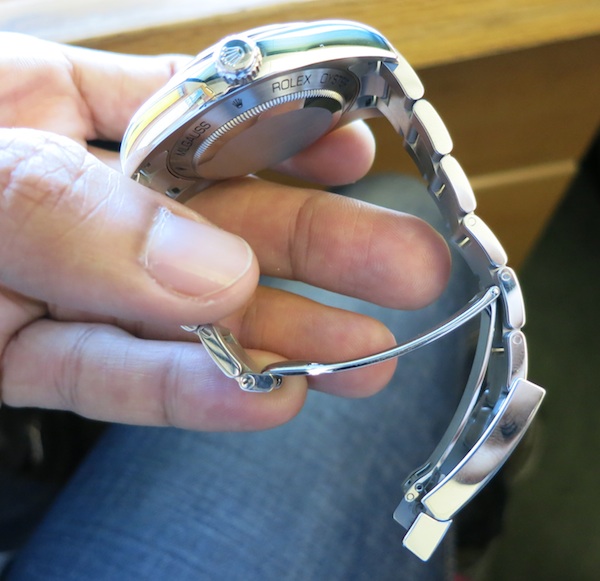 The folding clasp on the Rolex Milgauss is one that can create some debates.  Unlike the Oyster Flip Lock clasp that is found on the GMT Master II, this one does not have a folding lock and uses a loose bit that you pull with fingers (or nail) or push to create a lock.  That lever-like bit, even when closed, seems to be dangling and does not appear to be securely locked, while the rest of the clasp does lock quite nicely. At first, I did not appreciate this bracelet style, since the dangling part of the bracelet seemed to swivel a bit…  However, I have to come to appreciate the fact that it is a lot easier to open and close this bracelet than the Oyster Flip Lock on the GMT Master II. And for a daily wearer at work, I found that the simplicity of the Rolex Milgauss bracelet allows me to adjust it on my wrist quickly and efficiently without even looking at the watch and loosing any concentration on the task at hand. 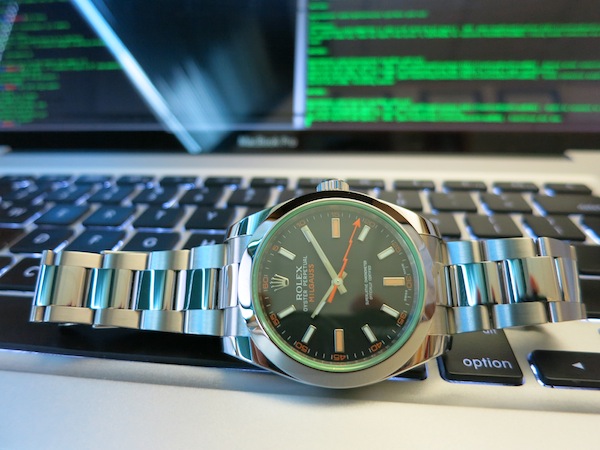 When Rolex first released the Rolex Milgauss reference 116400GV anniversary model, it was in some short supply which resulted in various speculations and price hikes.  However, nowadays you can find it in most authorized dealers, though its price keeps creeping up with Rolex’s yearly price changes, indicating perhaps some level of sales success.  The reference 116400GV model retails for $8,200 while the white dial and black dial models go for slightly less: $7,650.  The primary difference, besides the different dial schemes is that the GV is the only one with the green crystal, the others have the regular transparent sapphire crystal.  It’s also the only Rolex with a non-transparent sapphire crystal. 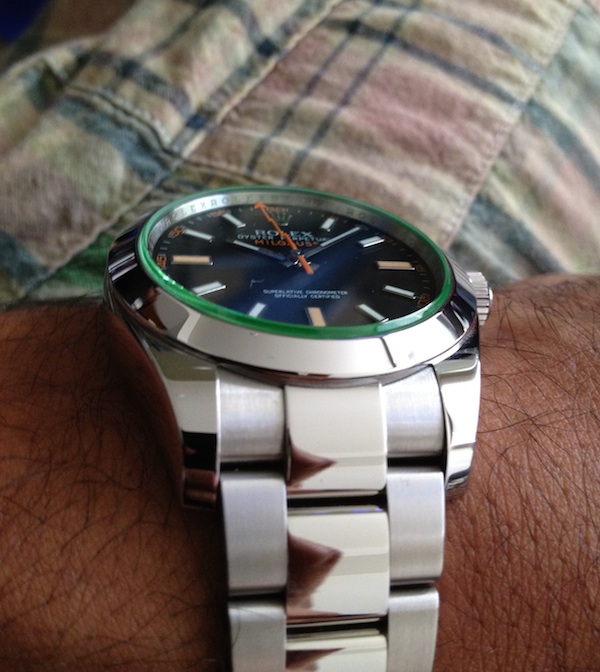 Overall, I could not be more satisfied with my Rolex Milgauss GV.  Even though I work close to heavy scientific equipments and various electrical devices emitting all sorts of magnetic fields, it is doubtful that I really need the kind of protection the Rolex Milgauss provides, though, it’s good to know it’s there.  The historical pedigree of the Rolex Milgauss and the fact that it was engineered with science in mind make it the perfect timepiece for nerds, like myself, who tend to also love science.  It’s simply the scientists’ watch! rolex.com

Necessary Data
>Brand: Rolex
>Model: Milgauss 116400GV
>Price: $8,200
>Size: 40mm x 13mm (48mm lug to lug)
>Weight: 150g (with two or three links removed to fit my wrist)
>Would reviewer personally wear it: Yes
>Friend we’d recommend it to first: any guy (or gal) interested in science or working in an engineering field.
>Worst characteristic of watch: the lume application on the hour markers, while great and shining in green and blue when the dial is well charged, does not last long.  It seems to last for about a few hours (not more than 3) with the blue light disappearing first and rather quickly.
>Best characteristic of watch: the unique green sapphire and orange lighting bolt shaped seconds hand.