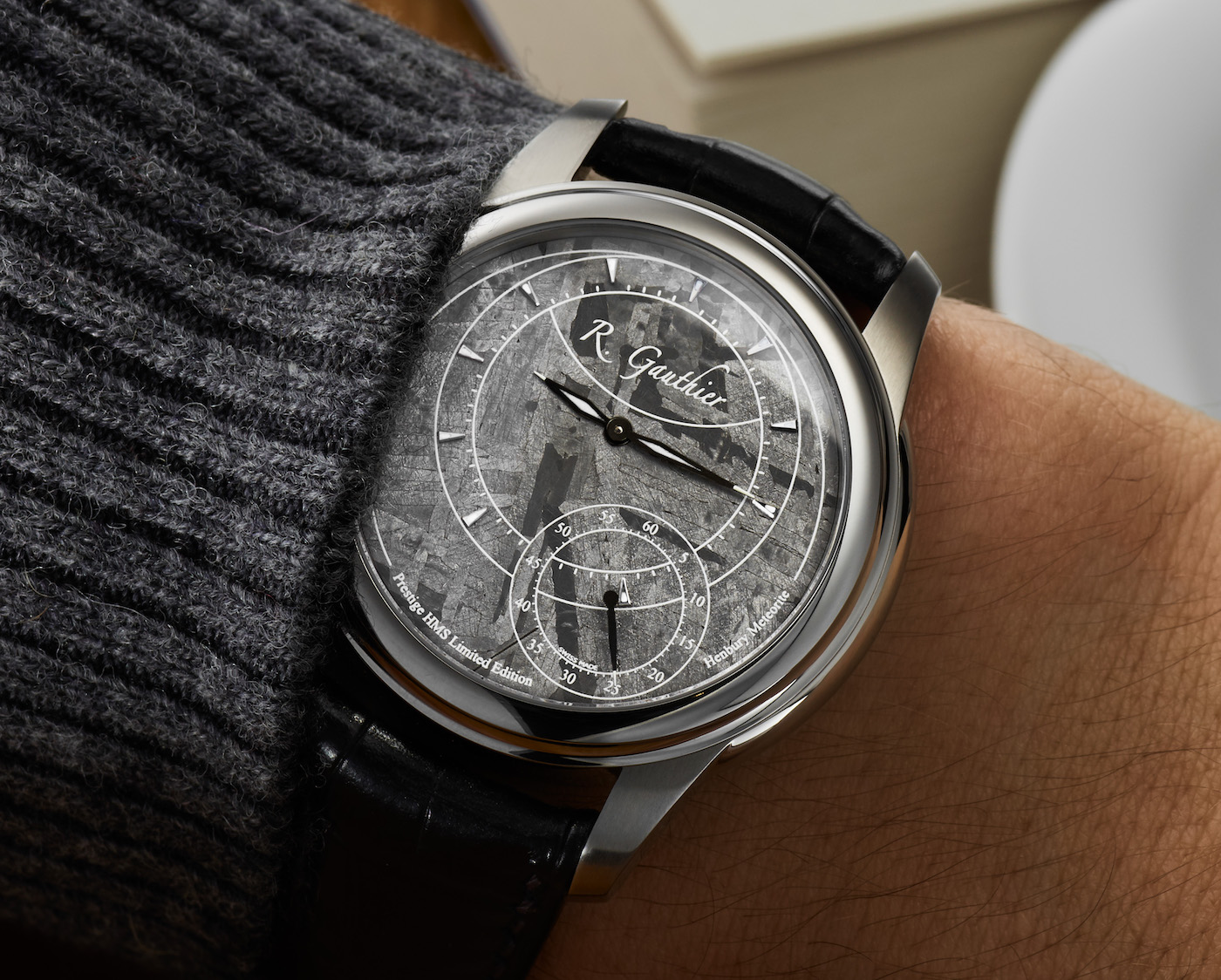 Stop the presses! Romain Gauthier has done the unthinkable and released a steel watch! Throw in a very nicely machined meteorite dial, and we’ve got ourselves a beauty. The Romain Gauthier Prestige HMS Stainless Steel watch gives cause for celebration on several fronts. For existing fans of the brand hollering for steel, their prayers have been answered. For newcomers, the muted-yet-interesting dial is a palatable introduction to this occasionally meretricious maker. And for purists, there is a lot to like about this movement from an engineering perspective. 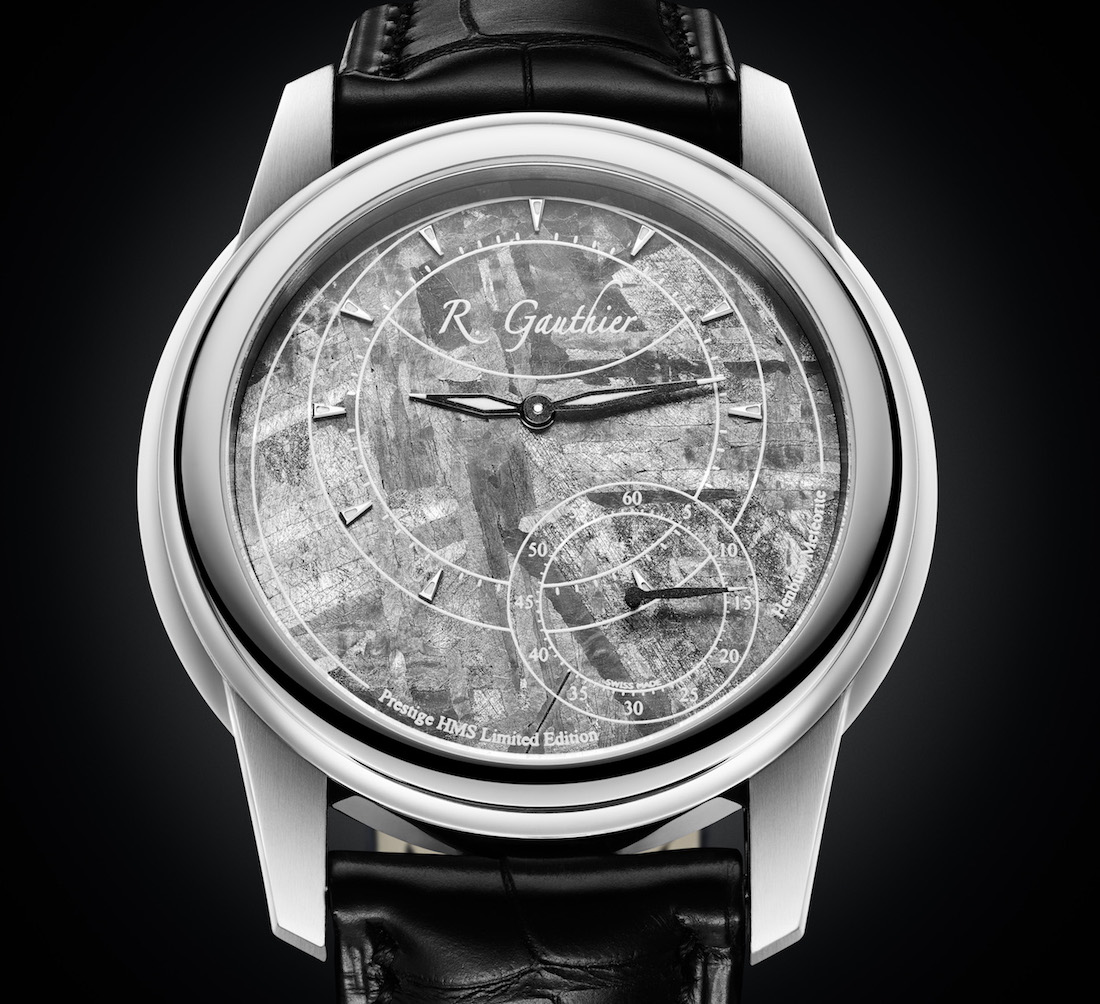 The 43mm stainless-steel case is a great inaugural effort. Truth be told, this exercise isn’t really about affordability. This is clearly more about customer preference. The reality is that most people, even those who are happy to spend five or six figures on a watch, like steel. That’s especially true if they actually want to wear it. It’s durable. It’s also easier to refinish. And to many, it is simply more attractive. Settling on a recognizable silhouette for the Romain Gauthier Prestige HMS Stainless Steel watch was a smart move if Romain Gauthier plans on adding to this collection. 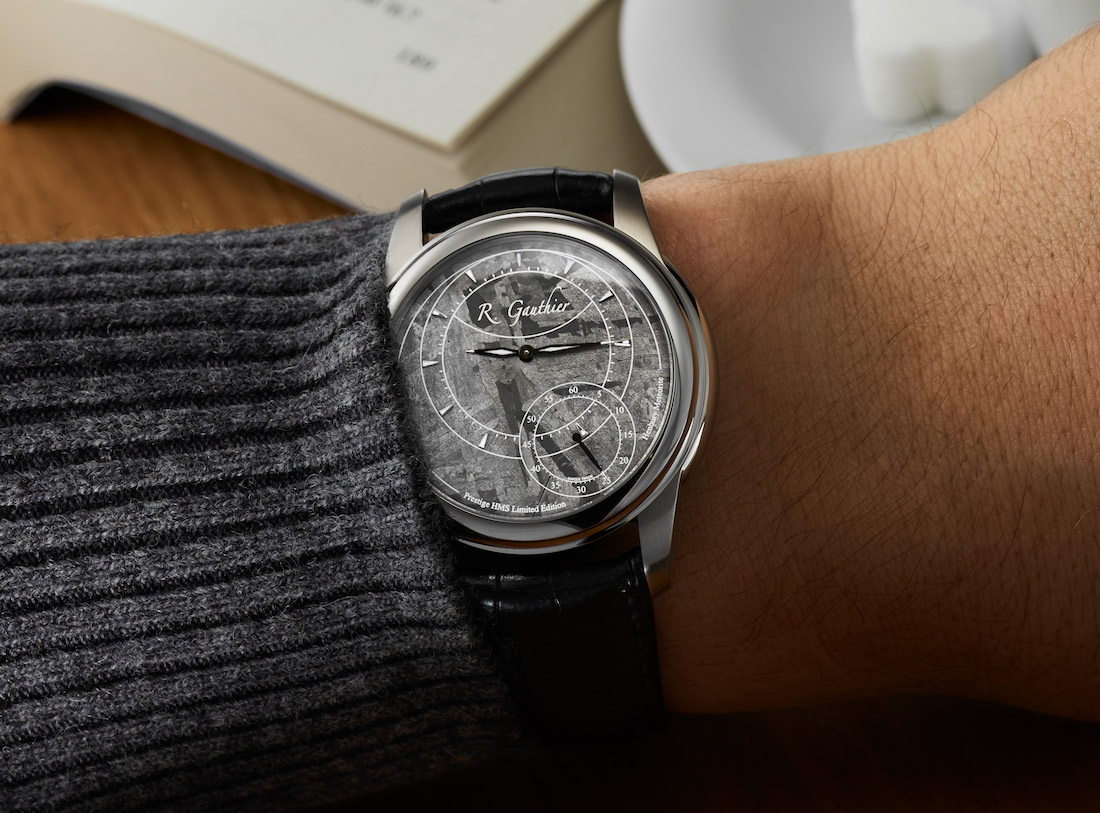 From a proportional perspective, it is a really handsome case. The sharp lugs and slightly chamfered underside, where they meet the more curvaceous case middle, give the watch a definite masculinity, while the softer flanks recall the typically dressy style of the brand. The seamless fusion of these two styles is very well done. 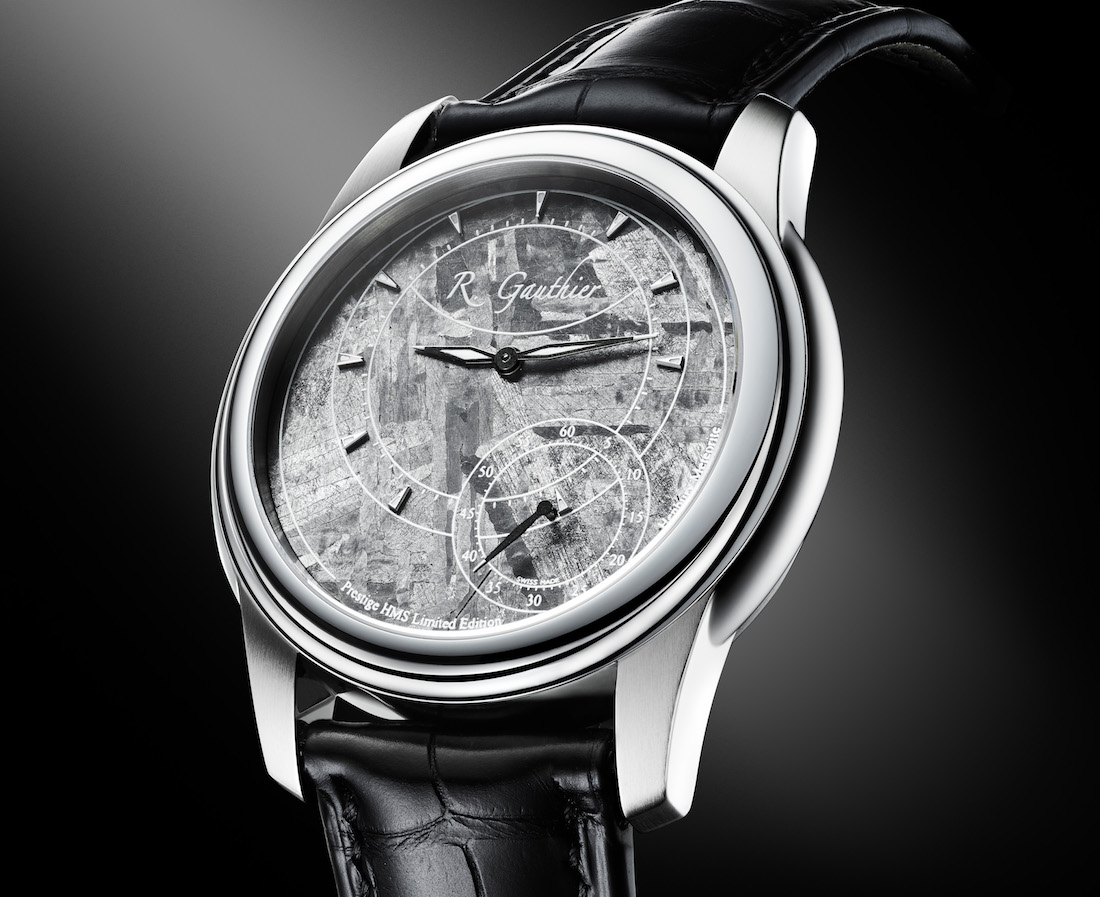 My favorite case element, however, is the one conspicuous by its apparent absence — the crown. Flipping the watch over reveals a wide, flat crown that is flush with the case back. This feature keeps the symmetry of the watch when viewed face-on, while not removing the ability to wind the watch while it is on the wrist (however fiddly that may prove in practice).

There is one significant drawback of this neat system, however. The first stainless-steel watch case from Romain Gauthier is only water resistant to 1atm! That’s not a typo: 10 meters, or 30 feet. However you want to spin it, that’s not a lot. I’d be nervous just sweating in a watch with a 1atm rating, not to mention one whose obvious weak spot is touching my wrist at all times.

The dial is made of part Henbury meteorite. This particular space rock touched-down in Northern Australia in 1931. This material is very rare and, aside from the 33m-wide, 0.8mm-thick slithers that make up the dials of these ten limited edition watches, the only place you’ll find examples of this material is in the South Australian Museum for Minerals. And, of course, scattered around the plains of Adelaide. 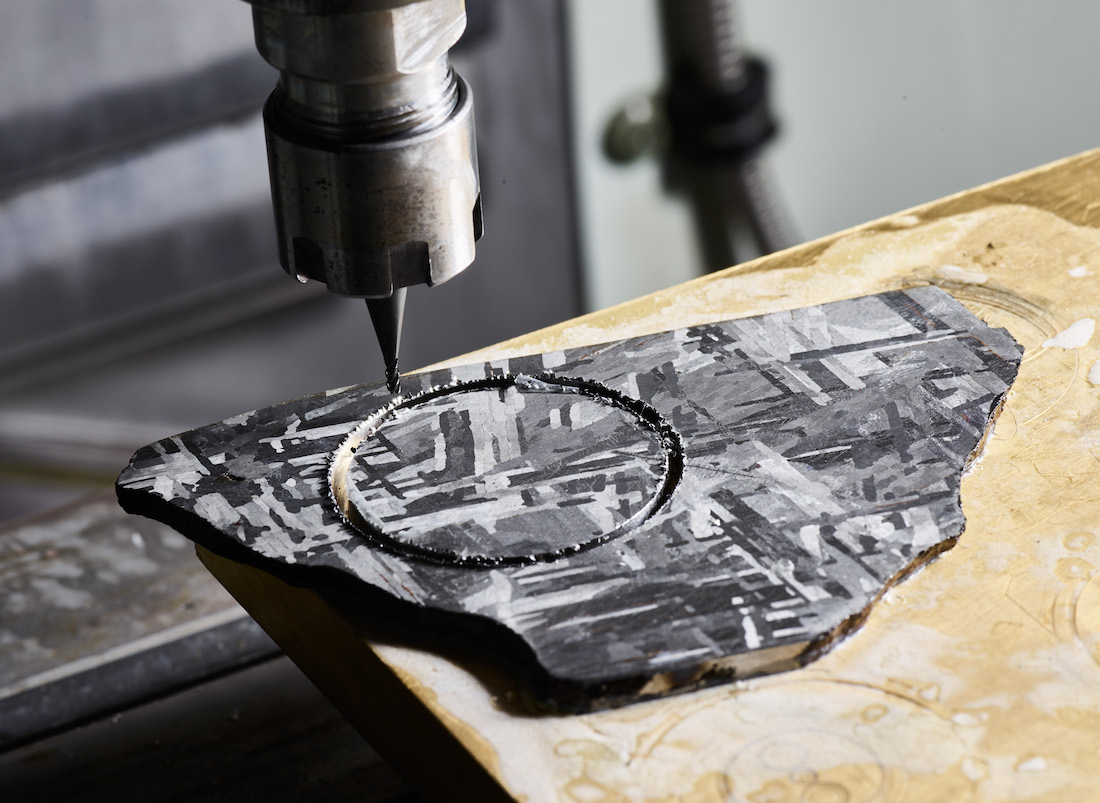 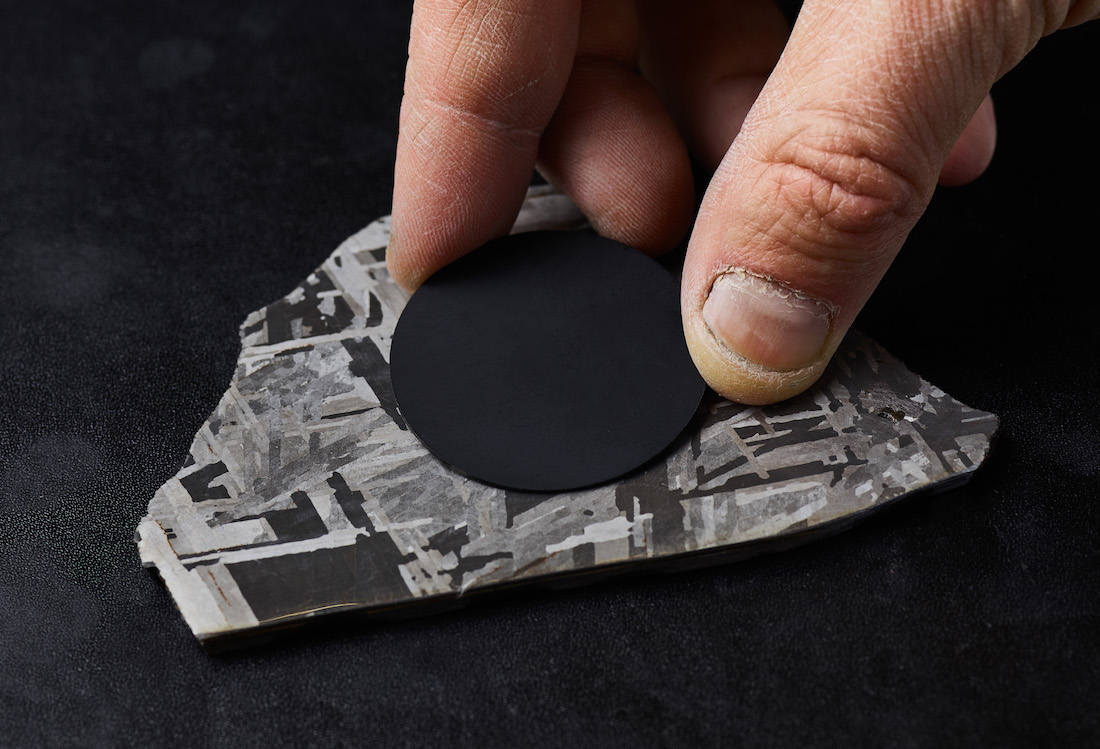 The dial starts life as a lump of grey metal. It is only after the metal has been bathed in nitric acid that the magnificent striations formed over thousands of years reveal themselves. These bands are known as Widmanstätten patterns or Thomson structures. They are formed within the parent asteroid during long periods of cooling. 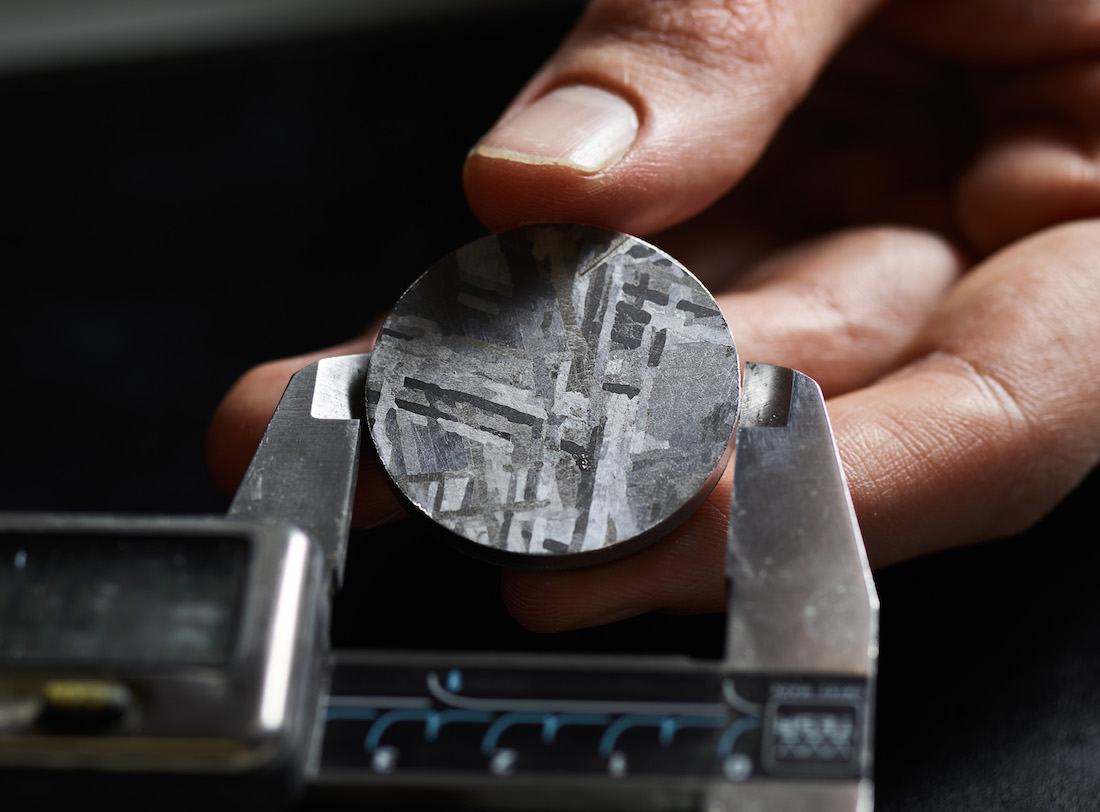 The dial displays the hours and minutes in an off-center dial, intersected by the seconds sub-dial at 5 o’clock. Some may balk at the price, given that this is a time-only watch (HMS stands for hours, minutes, seconds), but the level of finishing is certainly top-class, and really needs to be seen in person to be believed. 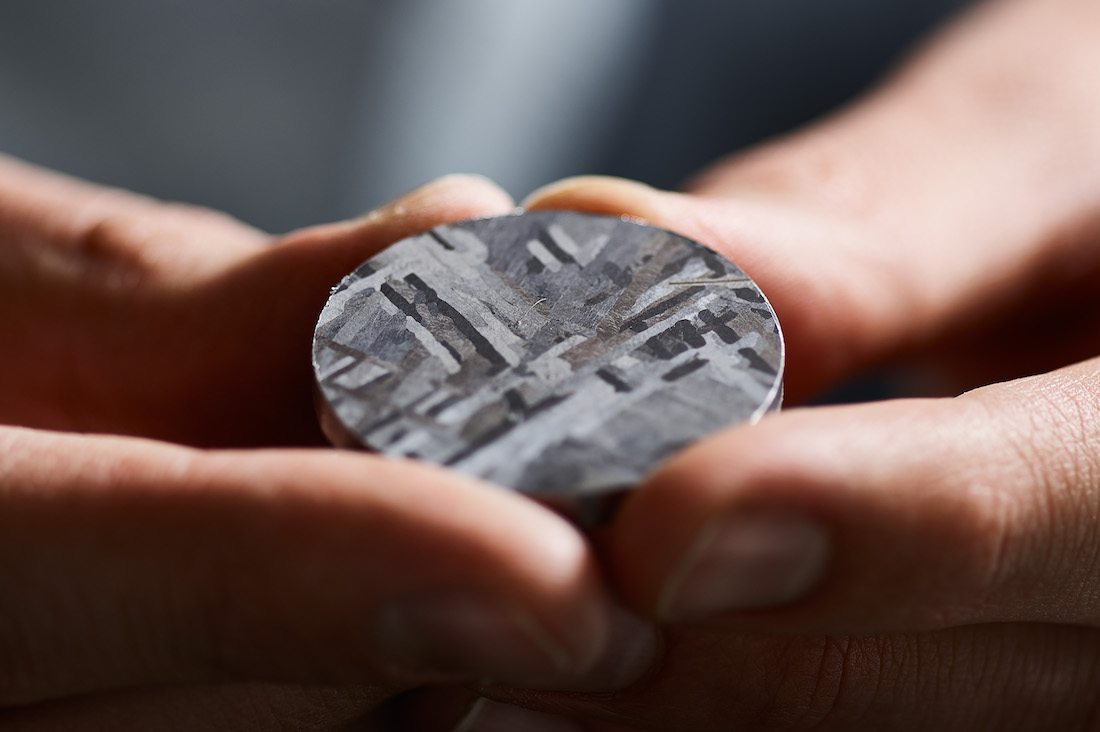 Caliber 2206 HMS has a 60-hour power reserve. It was created in Romain Gauthier’s own manufacture in Vallée de Joux, Switzerland. The movement has lots of quirky flourishes that add up to an identifiable aesthetic. The s-shaped screw head slots, for example, are an unusual, organic flair that is very on-brand.

The movement layout is also typical of the Vallée de Joux region. The use of finger “bridges” is notable. It is unusual for a “bridge” to support just one pivot. Normally, that role would be performed by a cock. A cock is a bridge with a single point of affixation. The distinction can be clearly seen in the comparison between a balance cock (one screw) and a balance bridge (two or more screws), which would be the most likely area to see a bridge used for a single pivot, due to that particular pivot’s importance to the watch’s function, as well as its extreme fragility. 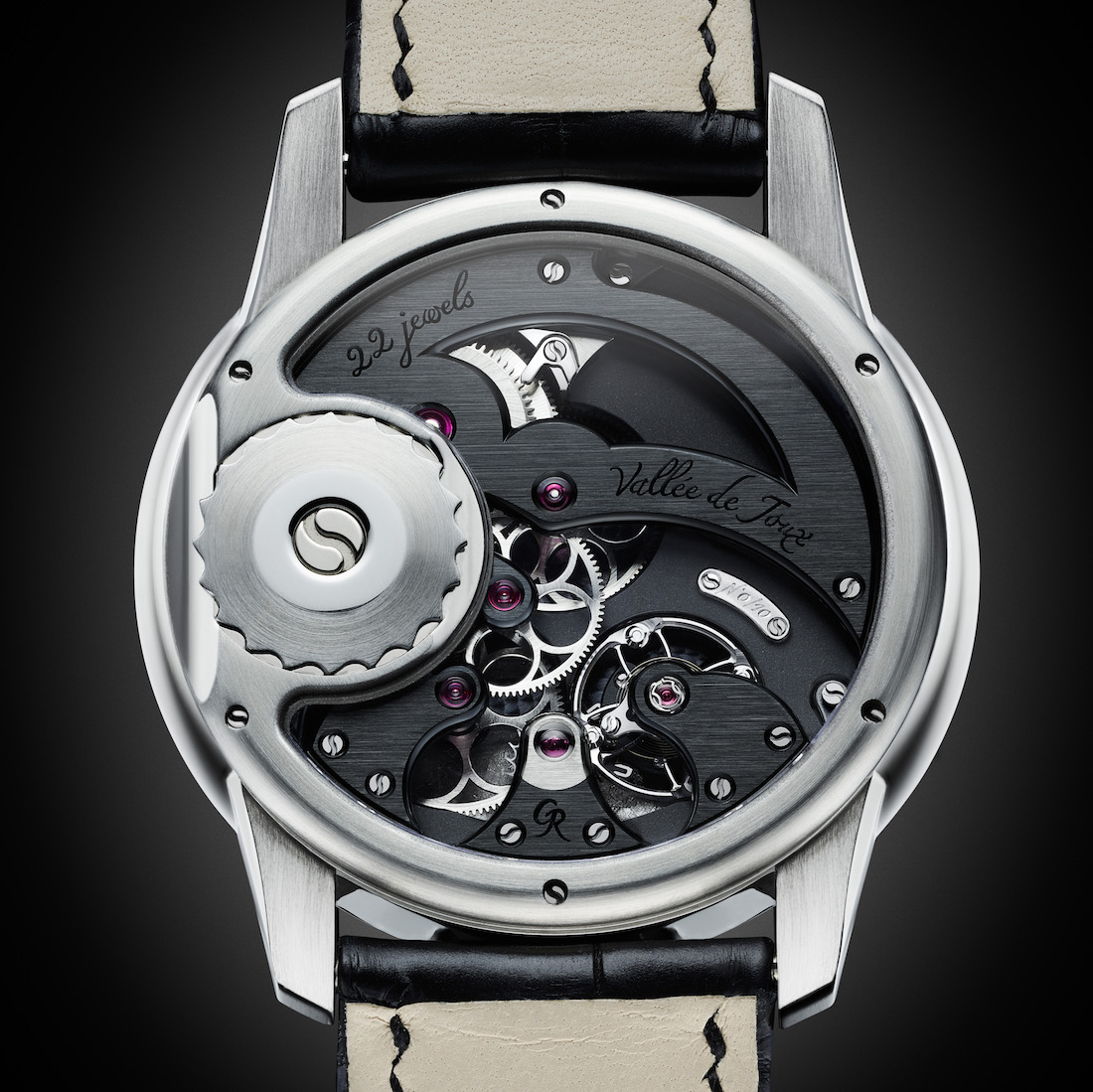 The hand-finishing displayed in this movement is exquisite. The hand-applied frosting is an art form, in itself. And the way the architecture has been left deliberately open so as to reveal a glimpse of the meteorite dial’s underside is sublime. 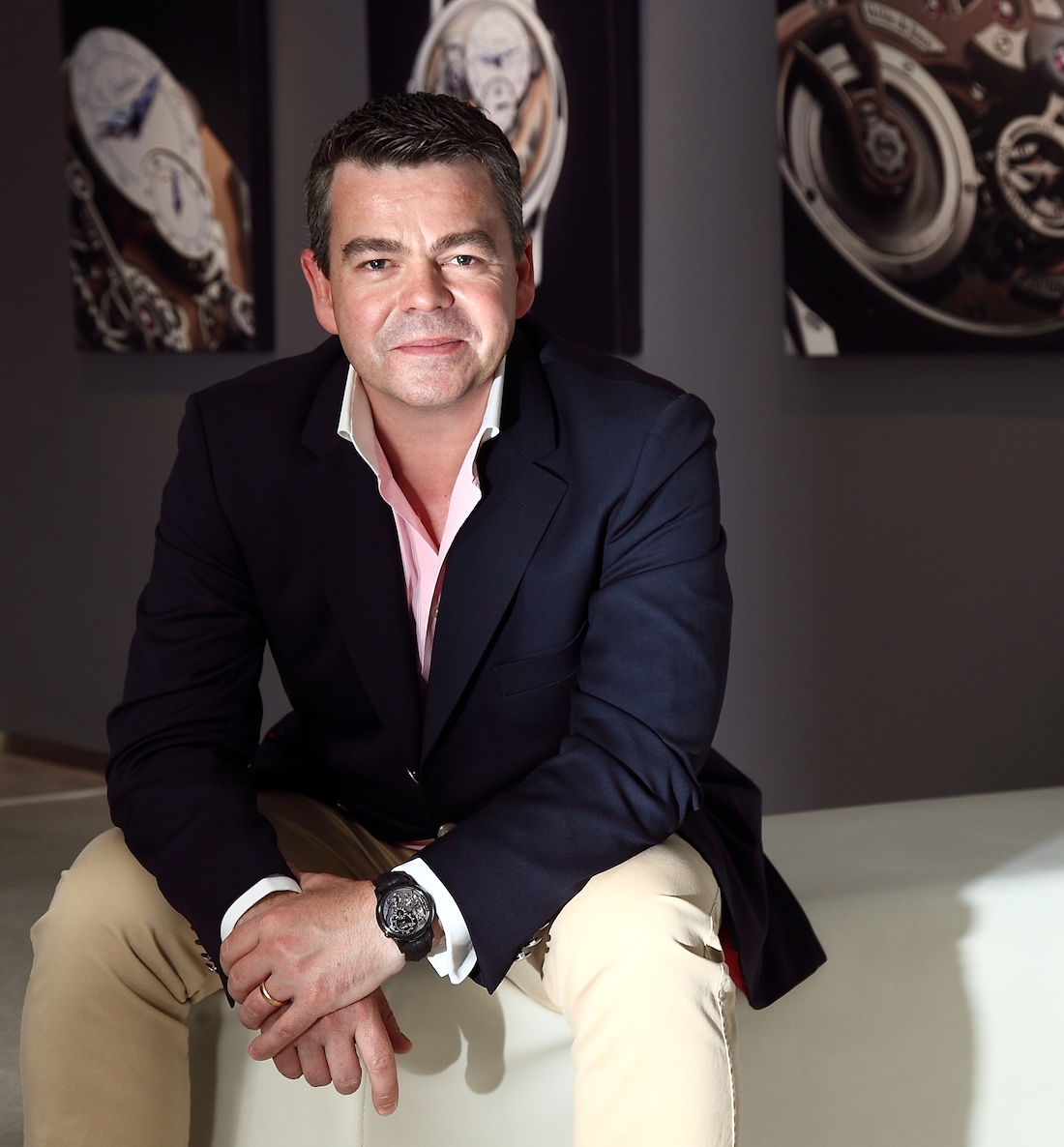 The movement is as technically impressive as always, but the aesthetic is a big leap forward, for me. The case, dial, and caliber all feel harmonious. And in a grittier, more industrial way, without being brutish. At CHF68,000, the Romain Gauthier Prestige HMS Stainless Steel watch is still a stunningly expensive piece, but it is an exciting first step down an avenue I hope the brand continues to explore. Who knows? If steel becomes a more common material in the brand’s catalog, perhaps there will one day be a Romain Gauthier mere mortals can afford. Visit romaingauthier.com to learn more.