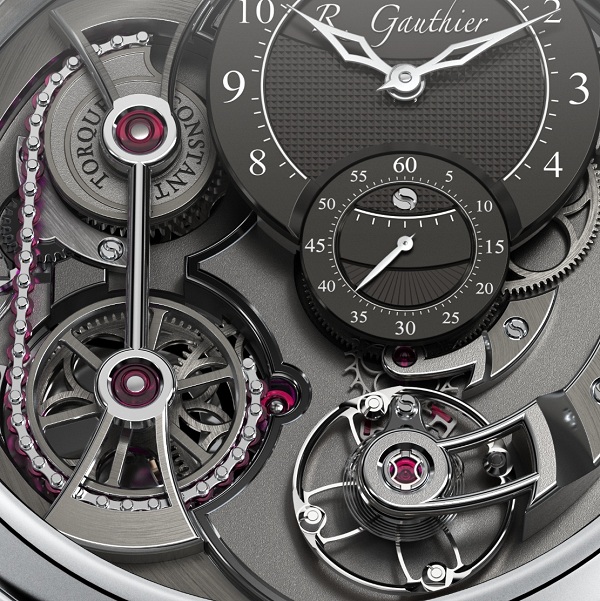 Romain Gauthier Logical One Watch: How Sensible Is It?

Independent watch maker Romain Gauthier (R. Gauthier) has just released a new high-end watch which at the same time we both really want and completely don’t need. Oh, horology… you wicked maiden. I highly disagree with the name “Logical One.” It implies that this watch errs on the side of prudence and sensibility. Which is most often not the case with beautiful high-end timepieces such as this. There is nothing logical about it. However, to give credence where credence is due, Mr. Gauthier comes from an engineering background and the basis of this watch is to logically improve a particular watch movement feature that I quite love. So let’s check it out.

Logical One is all about improving the age-old fusee and chain transmission systems that move power from the mainspring to the rest of the movement. I love these because they look like tiny bicycle chains, are hard as hell to produce, and are very clever. What are they meant to do? Basically it is all about “constant force.” Meaning that as the mainspring unwinds, force to the movement is constant (versus its natural tendency to peak when the spring is fully wound and go down from there). The historical conical shape of the piece which the chain was wound around created the effect of compensating for the decrease in torque from the movement so as to maintain constant force to the movement. What does this do? It basically attempts to ensure that as the power reserve winds down, the watch does not go from running too fast to too slow… but always in the middle. 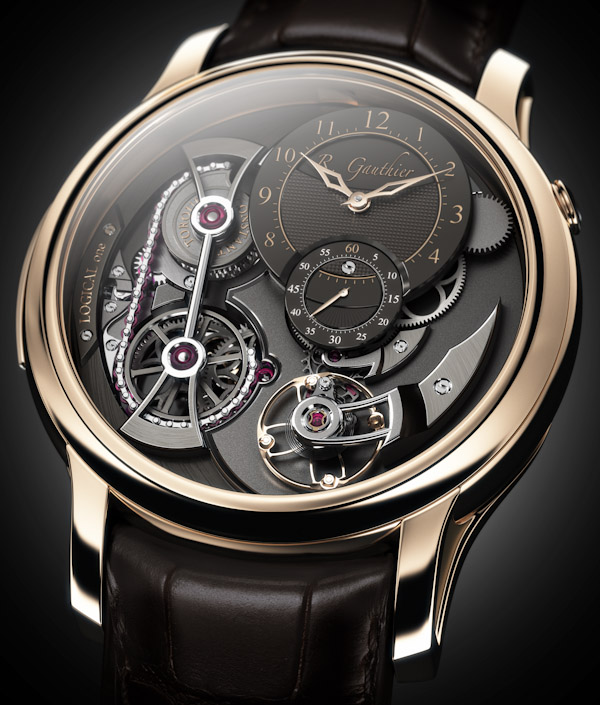 So what has Mr. Gauthier done about this? Well in short he has shortened the chain, replaced the cone (fusee) with a snail-shaped cam, included synthetic rubies into the chain, and stuck the whole darn thing right on the dial. Sexy! I guess this is no longer a fusee and chain mechanism but rather a “snail and chain.” The snail cam is said to work better than the cone because the chain doesn’t have to move (up and down) and slightly bend (aside from its obvious wrapping around the cam and gears. I suppose that makes sense. Because the chain cannot wrap around it as much, the chain is shorter compared to a traditional one. Also, to minimize or negate the need for lubrication, the chain is fitted with ruby links. Now that is pretty cool. But you know, I still mostly like just being able to see it on the dial.

Movements like the in-house made caliber in the Logical One are beautiful, painstakingly designed, and intricately decorated. I like the industrial edge of the movement that contains a range of traditional elements, but feels very modern in its execution. So much so that it almost doesn’t fit with the rounded elegant case of the watch itself. You can easily tell that the movement was designed from the ground up to be visible, skeletonized, and to offer the most interesting elements on the dial. 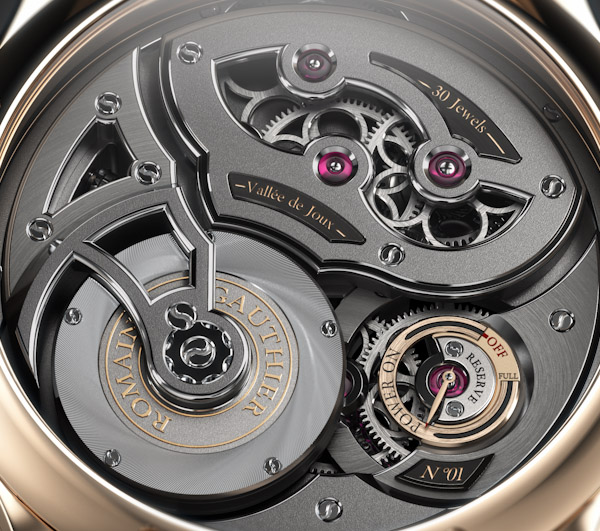 Another area of “innovation” from R. Gauthier is in the mainspring barrel itself. Apparently the spring is sandwiched between two slices of synthetic sapphire crystal. This is said to reduce the need for lubricant which over time clogs and needs to be cleaned. You know I hear a lot about these fancy new high-end movements being designed to reduce their own need to be serviced or maintained. I seriously wonder how true that it.

People who recall Romain Gauthier’s first watch will remember that the whole point was to place a small wheel on the bottom of the watch case that you could turn with your hand to wind the watch. He said that it was much more pleasing than turning a crown. I will take his word for it as he never let me borrow his. This concept of crown-hatred continues in the Logical One. Rather than spinning a crown to wind the manually wound movement, you press a little pusher on the side of the case. Just keep pushing it until the power reserve indicator on the back of the watch goes well into the “full” region. I tend to agree that a system like this will make it more interesting to wind a watch. Especially with how tiny or sharp crowns cut from today’s CNC machines can be. 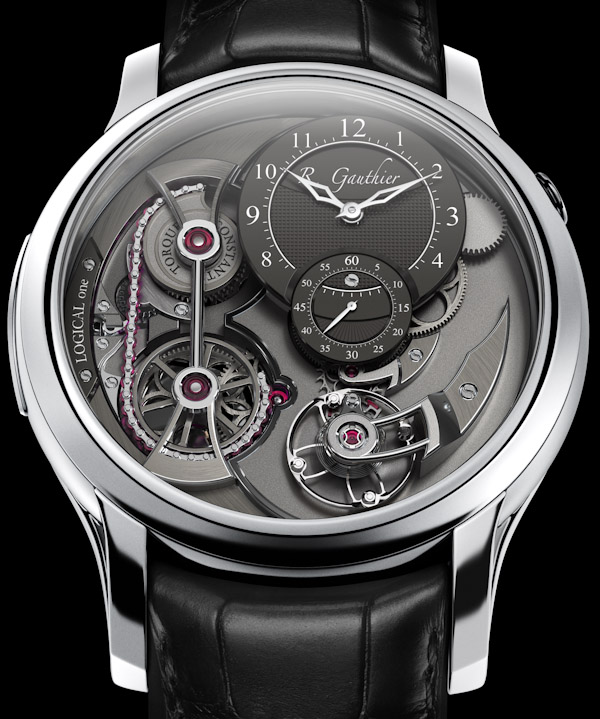 The Logical One watch itself will be 43mm wide by 14.2mm thick in an 18k red gold or platinum case. The movement will be produced from mostly titanium, steel and brass. While not a sport watch, it is water resistant to 50 meters. The time is still set via a crown that is located around 2 o’clock on the case. It all looks pretty swell and is probably Mr. Gauthier’s finest (and of course most expensive) creation. He also doesn’t want you to forget that there are three patents pending which apply to this watch. No doubt Romain… no doubt.

With all its features, the watch still only tells the time. How constant the force is or how reliable the components are is something only the future can show. I have a feeling however with the brands’ reputation, the movement will perform quite admirably. The time is shown off-centered with a lower subsidiary seconds dial in a way typical to how F.P. Journe lays it out. Below that is a quite prominent view of the escapement and to the left of course is our friend the chain. My lord this watch is so pointless and loveable. I can’t wait to photograph it and push to wind this baby up. Price is about 130,000 Swiss Francs. montres-rg.com 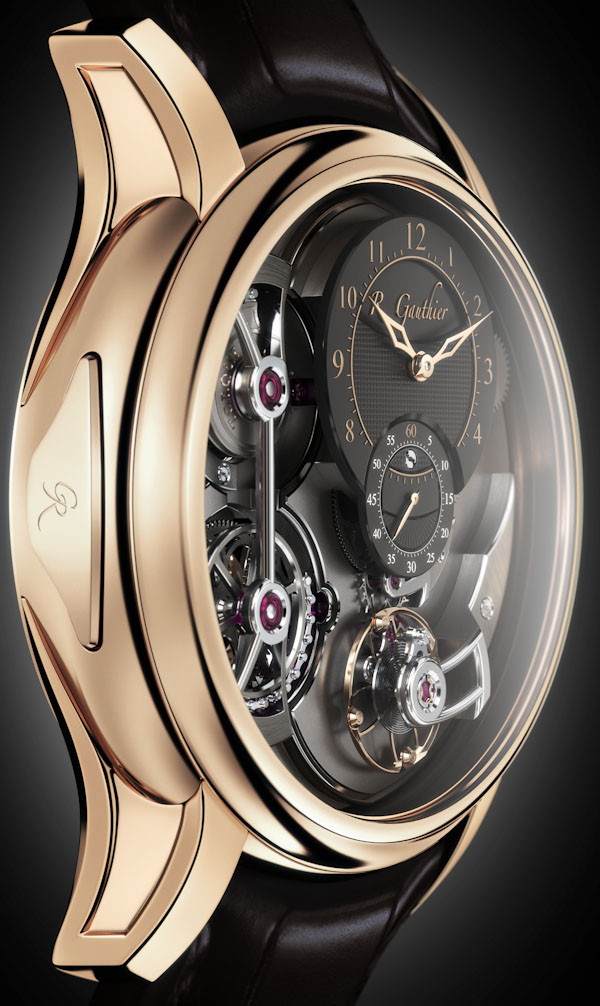