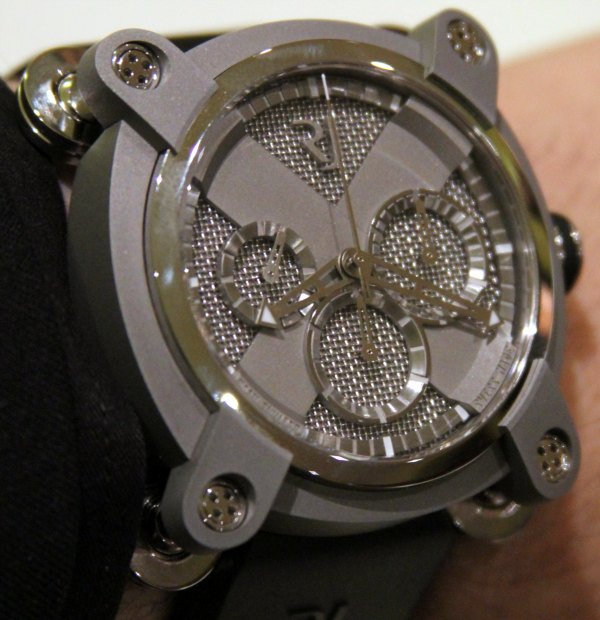 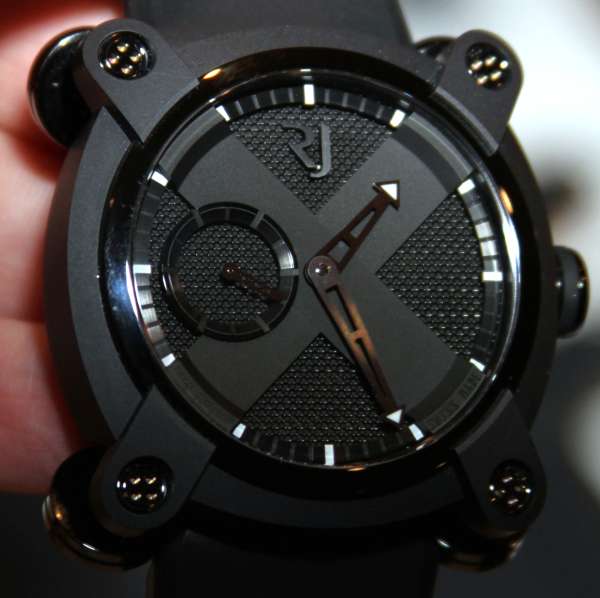 Back at Baselworld 2010 I stopped by the Romain Jerome booth to see “what was cooking.” Turns out it was moon dust. As an extension of the Moon Dust DNA collection of watches, Romain Jerome (RJ) showed-off the “Moon Invader.” On the back of the watch is a metal plate meant to look like the moon that in it actually has dust from the moon baked into it.

I first wrote about the Moon Invader collection here, based on the prototype. Now, after seeing the final pieces, a find a few small changes have been made to the current versions. Most notable in my opinion is the lugs. They were supposed to “freely articulate” and conform to the wrist, but that didn’t work out quite as planned. So what RJ did was connect the “lander feet” to the straps and have them move with the movement of the strap. It works well this way, and I think holds true to the original concept. That little feature was a pain to accomplish because of all the friction on the parts. As I understand it, RJ needed to work with a specialist to come up with a Teflon coating on the inside of the ball-joint to keep it operating smoothly. 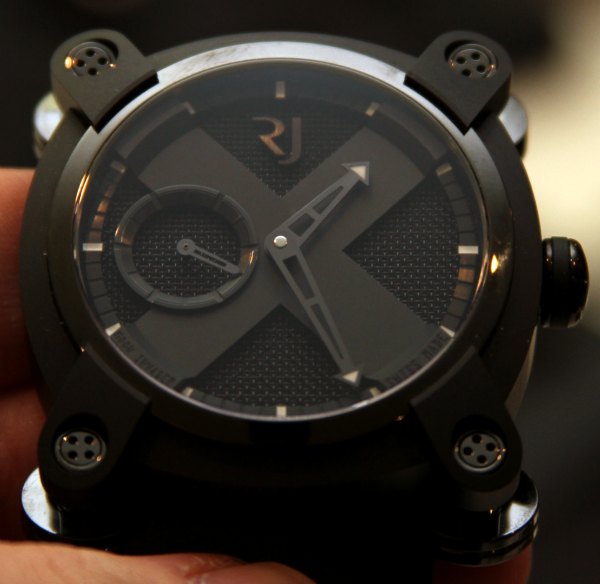 As I said, the Moon Invader is meant to look like a small lander craft complete with small feet. While most avant garde, the case is actually neat looking and the detail is impressive. The case is 46mm wide – but feels larger given the extensions of the RJ “X” motif that goes through the center and to the feet. It is comfortable though. There are really no other watches that look like this. The dials start with a mesh metal. This is supposed to be inspired by the tire treads of actual moon lander vehicles. Whatever it is inspired by, it look slick, and no one else I know does this. 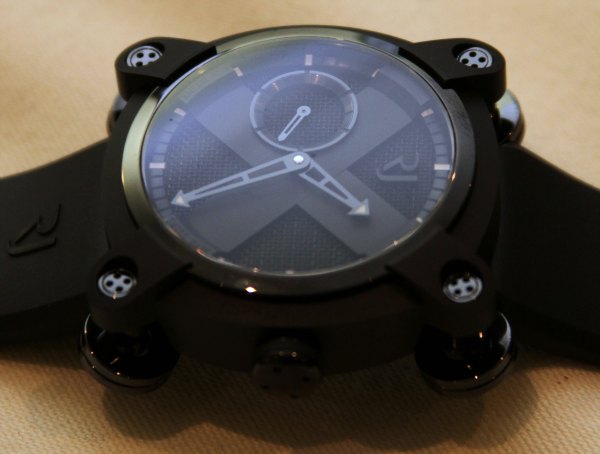 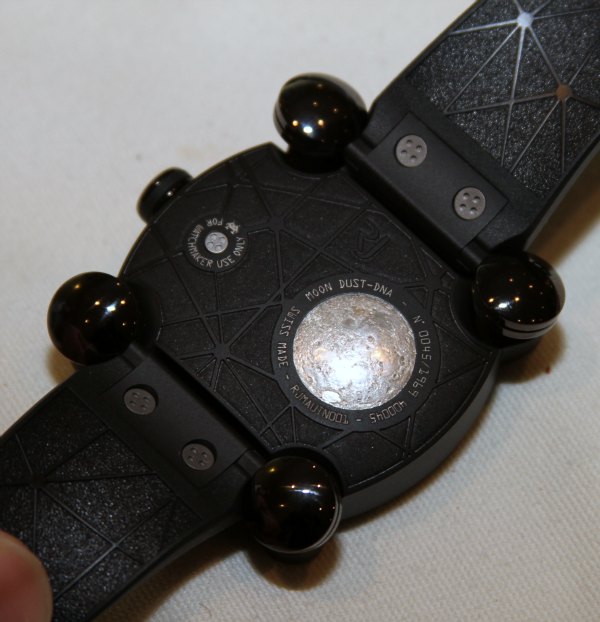 The case is in steel, but some versions also have gold for the bezel and some other parts. The steel is PVD great to be either matter black or two shades of dark gray. The latter gray with 18k rose gold looks pretty swanky. Plus, I like the combined look of the matte black case with the polished “feet.” There are a lot of textures and tones on this watch that make it interesting. 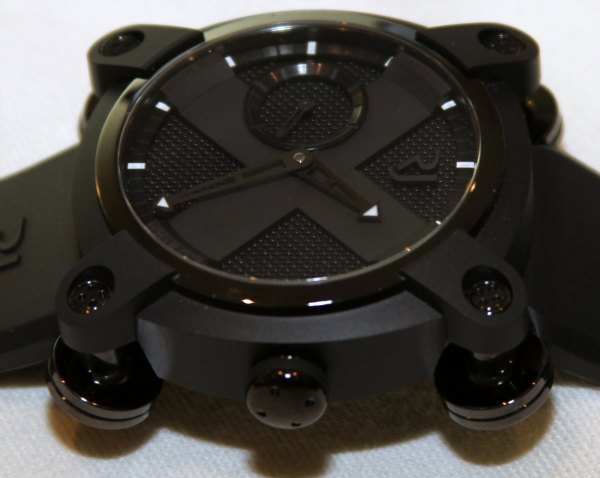 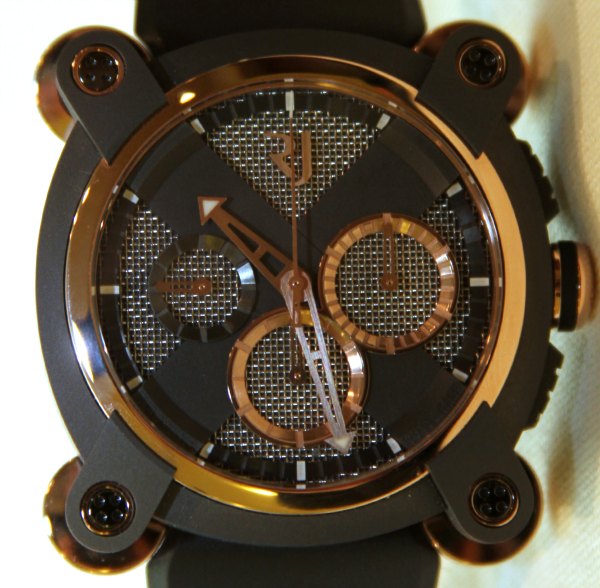 When spending time with RJ, CEO Manuel Emch was wearing the all black Moon Invader Chronograph. I had to laugh at just how “all black” it was. You really need to be up close and person to see what is going on with the dial. Trust me that this (as well as the entire collection) was a pain in the ass to photograph. What is interesting is how the tips of the hands and the hour indicators are done in small, minimalist bits of white lume. This makes telling the time manageable. The many levels and features of the dial do make them fun to inspect.

As I said, there are chronograph versions of the Moon Invader, as well as a three-hand with a subsidiary seconds dial. The chrono has the RJ001-C  automatic that done by Concepto, while the three-hand has an RJ001-A automatic also done by Concepto. RJ indicates that “spare parts from the Apollo XI” are in each watch. I don’t know exactly where these spare parts are. When asked about it, Mr. Emch just smiles, and reassures me that they are in there. I’ll have to ask more about that next time. These little timepieces are more complex to put together than you can imagine. 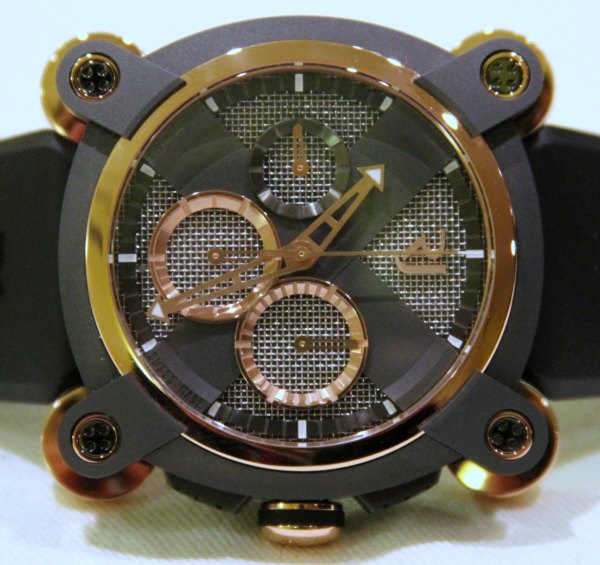 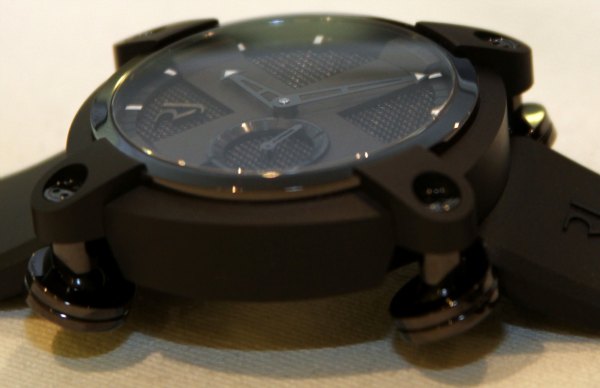 Back on the rear of the watch you get a totally different feeling. While the “exposed” parts of the watch on the surface are clean and minimalist, the underbelly of the case and rubber strap are more interesting. There is a sort of “star map” texture that is interesting. Don’t miss the little figure from Space Invaders on the back of the case. Can you find it?

RJ doesn’t make too many watches a year so these are exclusive and limited edition watches only. Each version is limited to 1,969 pieces. I won’t explain the source of that number as I am sure you can figure it out. Price for the Moon Invader Automatic models ranges from 9,950 – 14,950 Swiss Francs, while the Moon Invader Chronograph ranges in price from 12,950 – 17,950 Swiss Francs.