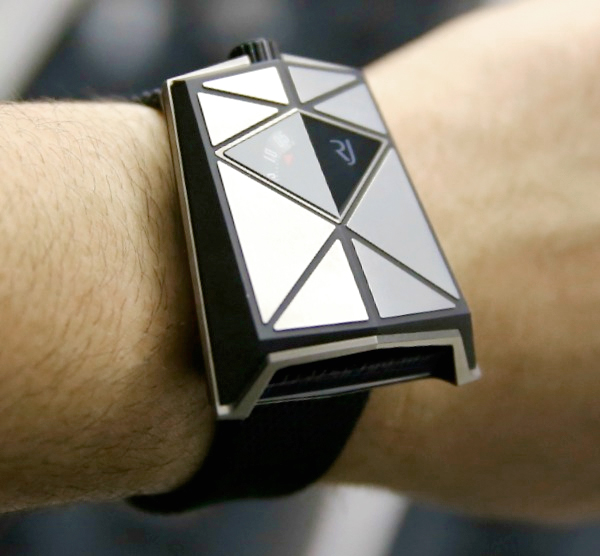 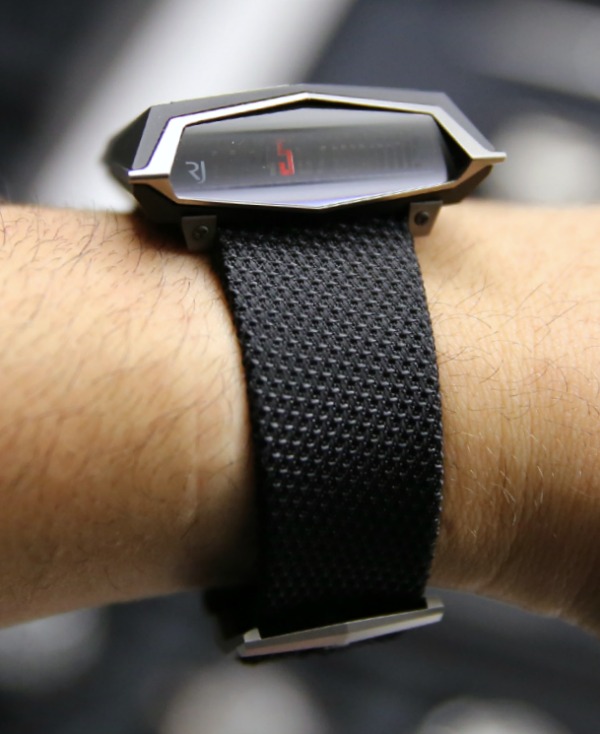 Ideally, there is a video attached to this article which describes in more detail the story behind what you are seeing. This watch is the Romain Jerome Space Craft, and like most things traveling in space, it is a lone object which arrived from a mysterious place. Romain Jerome had the compulsion to create something unique and unlike anything else in their collection. Something that also would not have anything else like it in the wider collection in the future. A random act of design, the Space Craft is still something that seems recognizable in 2013 given the existence of a fellow rare mechanical object.

No doubt you are going to connect this wedge shaped driver’s style watch with the Horological Machine No. 5 “On The Road Again” by MB&F (reviewed here). And in fact, from a design perspective, you’d be right. Two rather limited edition wedge shaped driver-style watches released within months of one another, from two of Geneva’s more interesting watch makers. Though the personality of the watches is worlds apart, the Space Craft and the HM5 have a surprising amount in common. These qualities are less about copying or one brand following the other, but more about the reality that the Swiss watch industry is a small place.

Romain Jerome and MB&F are actually located a few blocks apart in Geneva and of course are friendly with one another. They have also used some of the same designers and suppliers. More specifically, watch designer Eric Giroud frequently worked with MB&F and, Jean-Marc Wiederrecht and his company Agenhor have been a major part of some of MB&F’s more spirited movements. The same two men worked on the Romain Jerome Space Craft watch. It is a small world indeed. Nevertheless, in earnest, both MB&F and Romain Jerome claim that the two designs had nothing to do with one another. It is a fact that both models required quite a while to develop and design, and it was really just a coincidence that the brands released such similar watches within less than half a year of one another. Having said that, upon close inspection, the pieces are quite different.

According to Romain Jerome CEO Manuel Emch, the Space Craft is a side-read watch inspired by 1970’s futurism design, architecture, and Darth Vader’s helmet. Emch is frank about the inspirations, but the resultant watch is no mere throw-back design gimmick. On his desk, Emch has models and prototype versions of the Space Craft. A year ago he showed me early versions of the watch and the final timepiece is quite cool – albeit sharp. Those angles don’t just look pointy, they are pointy. Using “anglism,” the Space Craft is all about sharp corners and flat surfaces. It is sort of a watch that a mother might warn “don’t hurt anyone” before letting you put it on. 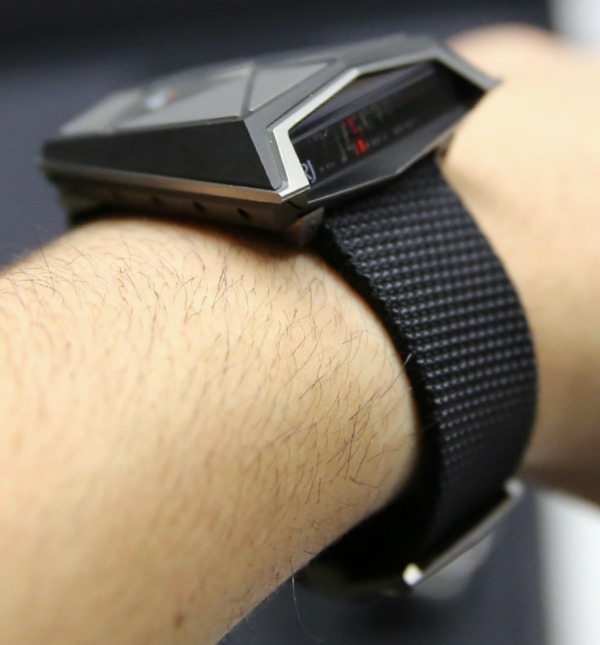 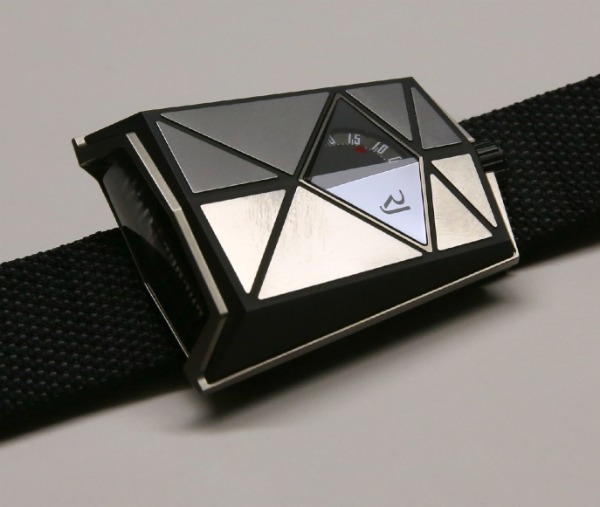 It is true that I was wearing a prototype, and RJ states that no doubt the final versions of the Space Craft will be a bit softer to the touch. Not too soft I hope, the many sharp angles of the design really help it to look distinct. The case is made from polished pieces of titanium as well as black PVD coated steel. You can tell that the construction wasn’t simple, and to achieve the desired look, the parts need to fit together very well. Low tolerances here! Everything about the concept is about design. It looks like something from Star Wars or Star Trek, vehicle or building. You choose.

Inside the watch is an automatic movement based on the Swiss ETA 2892, but heavily modified thanks to Jean-Marc Weiderrecht’s team at Agenhor. The movement has a front displaying jumping retrograde hour hand/marker, and a disc-style minute counter on the top of the case visible through a window. The hour indicator has a red marker behind a row of numerals to indicate the hour. It jumps to each hour as time passes. 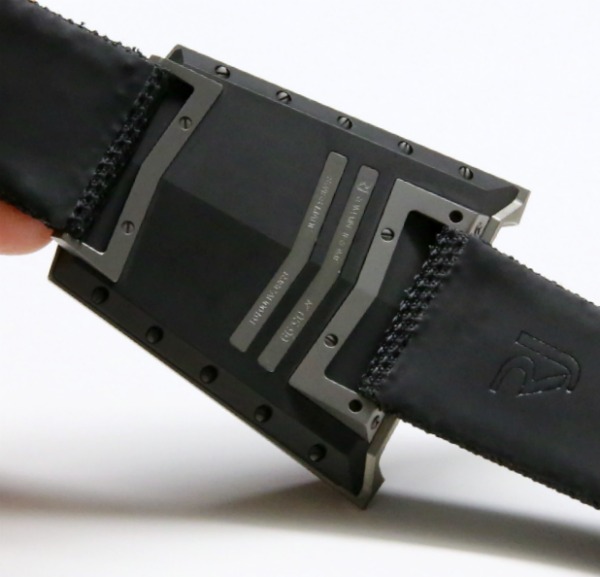 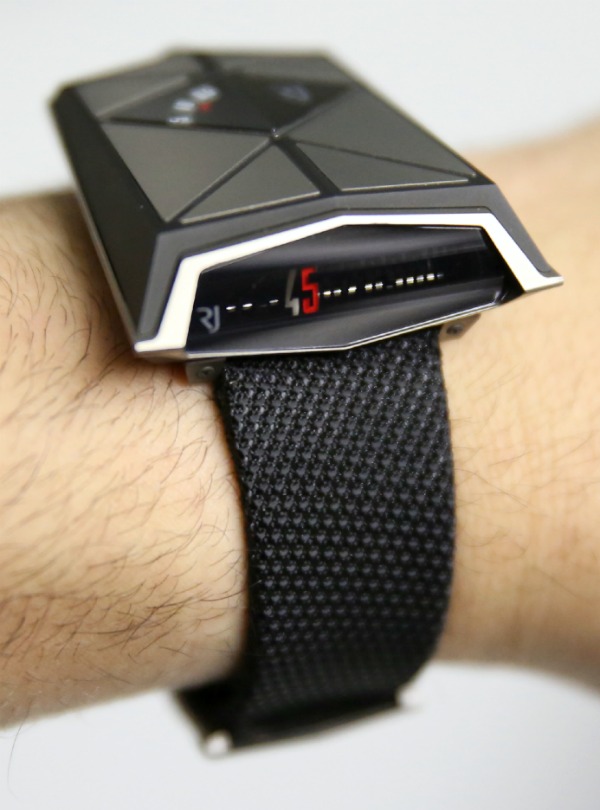 Yes, you oddly need to consult the top of the watch after the front of the watch to get the time. Hours first, then minutes. Though odd as it is, it isn’t a big deal. The watch is actually quite interesting to look at from most angles. Romain Jerome will be the first to tell you that their products are mostly not for people with a dire need to know the time with accuracy always.

It is probably a good thing that you can see the Space Craft watch on my wrist. It is not actually terribly large, but that doesn’t mean it is necessarily small. The watch, while being very modern in its design, is more classic in its dimensions. Though, it is a tall watch in parts. The red color in the design and the complications makes me think that the watch is sort of a mechanical-styled KITT car. A 1980s throwback for sure, but this watch attempts to throw backwards and peek forward. 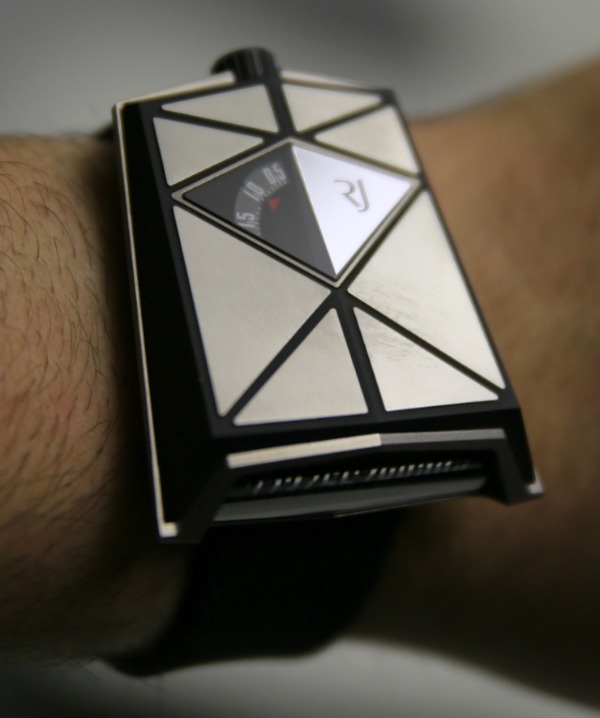 The Space Craft gets a lot of points for its aesthetics, its concept, and its execution. It is certainly cool. For sure cool, and not just because it is deliberately trying to be different or its 1970s theme. It is cool because it works together as a whole while still taking into consideration what watch lovers and design lovers are interested in. At first I was quite perplexed by the entire thing. Though, the shape and angularity of the design are elegant and very visually interesting. According to Romain Jerome it is a good timepiece to wear with jeans. What do you think?

Limited to 99 pieces, the Space Craft might end here with Romain Jerome satisfied with the run or we might see some additional versions in the future. The price is as Romain Jerome describes as “accessible.” Which they remind us is not a synonym for affordable. It is just less expensive than other such “concept” watches. Price is 21,900 Swiss Francs. romainjerome.com