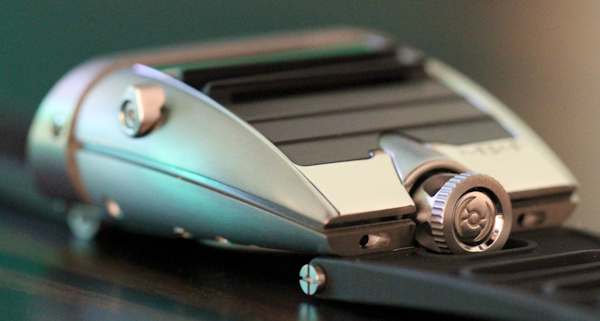 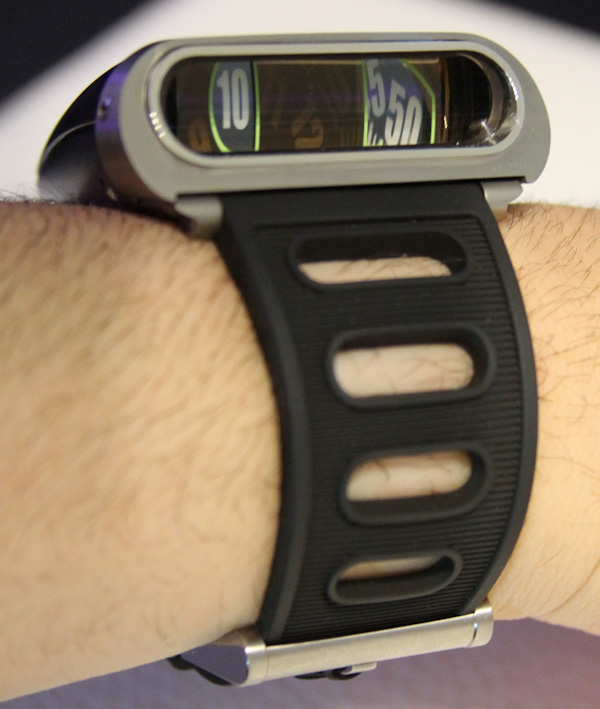 Before he presented the HM5 watch to me for the first time earlier this year, MB&F’s Max Busser first showed me two vintage watches from the 1970s. One was an Amida and the other was a Girard-Perregaux. Each was called a driver’s watch, and was designed to display the time from the side. The idea being that someone with their hands on a steering wheel didn’t have to turn their wrists to read the time. The Amida was mechanical while the Girard-Perregaux was an LED quartz. Max said to me that MB&F created a watch somewhere between these two, which also combined the design of some sports cars. He was absolutely correct.

It was not until recently that I was able to even discuss the MB&F HM5 watch (which we debuted here). I encourage you to visit that post to learn more about the HM5’s technical specs and see an aBlogtoWatch video presentation by MB&F discussing the watch. I probably won’t repeat too much of the tech specs in this piece. Now I bring you a hands-on review of the MB&F Horological Machine No. 5, nicknamed “On The Road Again.” All of this makes me wonder what an MB&F designed automobile might look like. 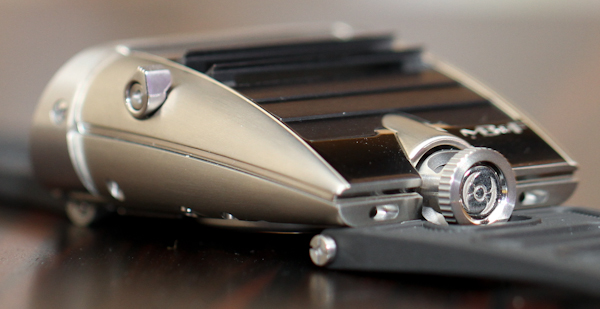 MB&F, in a sense, has become like Disney for me. Less about animation and songs and more about something to look forward to. Having said that, I should modify my statement to say “the Disney of 20 years ago and older.” Disney today just ain’t what it used to be! Anyhow, I thoroughly enjoy how MB&F is able to surprise and tantalize me. I am waiting for an HM or LM watch that I actually really don’t like just to say that I am not a mere MB&F fanboy. But so far, Mr. Busser (and his friends) are able to retain my attention rather well. When “On The Road Again” was first shown to people, it was (as can be excepted) met with mixed reviews. MB&F was slightly discouraged buy this until they recalled that “oh yea, we are the brand about polarizing crazy watches for the few and not the many.” Polarizing design is good, if not absolutely great when it comes to the success of many niche timepieces.

Most of the photographs out there of the Horological Machine Number 5 don’t really do it justice. It is admittedly an intellectually complex watch to photograph because it does not adhere to the typical conventions of how people see watches. For instance, it is not worn in the normal manner, and the most appealing part of the watch is not its “dial.” The dial is further unpleasant to photograph and not the main attraction of the watch at all. When you understand this, then photographing the watch becomes more interesting. I did have fun with it, and also enjoyed talking like a pretentious wannabe photographer just now. 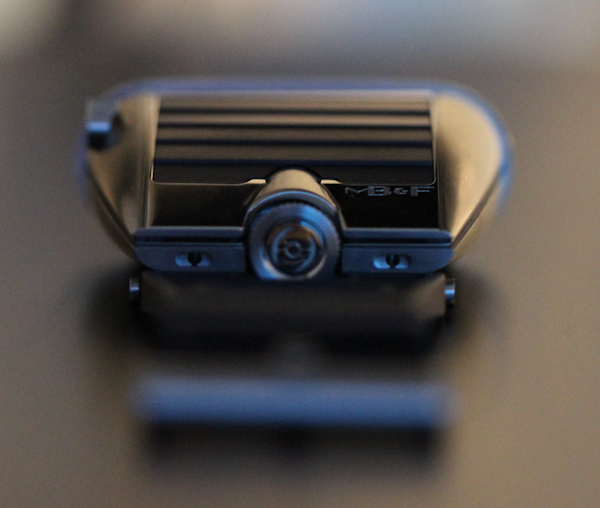 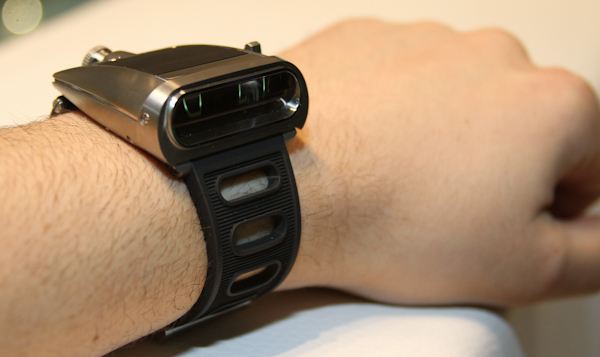 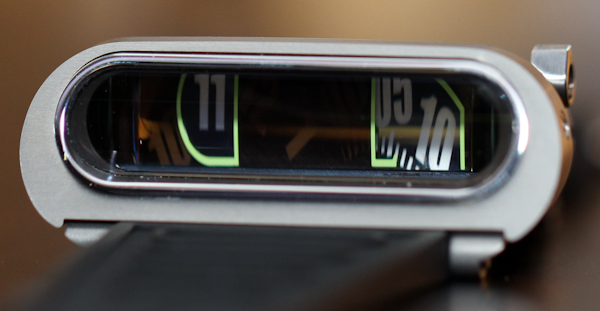 The dial of the HM5 is analog with a jumping hour window. Though analog in the “trying to look digital” way. The idea is quite simple, but it looks like a mystery. The mechanical movement in the HM5 is just like that of any other watch. But it uses a jumping hour disc and a second disc for the minutes. These actually point straight up. MB&F designed a sapphire crystal prism to project the view of the discs at a right angle. The prism also acts as a magnifier to make the time easier to read. Most of the crystal is also smoked, except for the area inside of the neon green lines where you read the time. Reading the time is pleasant but not as sexy as on an analog watch. That is sort of the nature of digital or digital-style time reading. MB&F wasn’t interested in it being ultra sexy. Rather, MB&F was interested in making the best looking side-view digital-style analog display ever made. They didn’t say that to me, but that was their goal. And that is what they did. It is the best of its breed, even if its breed is snapping turtles.

In fact, dials and instrument on cars in the 1970s were not sexy at all. Much of the 1970s and 1980s had rather plain looking gauges and instruments – which is interesting now that I think about it. This is a beauty pageant winner compared to many of them. The dial is however useful. I found it legible, and we can’t of course forget the lume. Yes, the numerals are lumed if you recall. They charge “manually” when you open the slits (louvres) on the back of the case. These are opened and closed using a little lever switch. It is fun to play with for sure. Open them up and light spills onto the discs charging the lume. Like I said before, it’s a very fun piece of over-engineered magnificence.

A group shot with the MB&F HM5 and its “inspiritors” show its relative size and case complexity. The watch looks a bit larger than it is, but it isn’t a small timepiece. The case is 51.5mm tall and 49mm wide. It is also 22.5mm thick. But it wears more svelte on the wrist I found. This is likely because of the case’s wedge shape. It is also quite comfortable even though it has a tendency to be visually a bit lopsided given the mass toward the dial. The case is rather light actually because it is mostly made from titanium-like zirconium. The inner case which houses the movement is in steel. The crown is large and great to operate, and I really like that MB&F made sure the movement was able to make the time adjust back and forward (not just in one direction which can be common with movements like this).

In pictures of the absolute rear of the watch where the crown is located one can see the two water vent “exhaust ports” on the ends of the case. These are meant to look like automobile exhaust pipes, but are also there to allow water and moisture to escape the case (which is water resistant to 30 meters). On the back of the case, only two of the louvres open and close – the rest are in a dark gray color. The case with its different tones and polishes looks very interesting and quite cool to be honest. In my opinion, the case of the Horological Machine No. 5 is difficult to dislike. With its automotive styling and lovely curves, it looks like MB&F should put wheels on it and a small steering wheel. 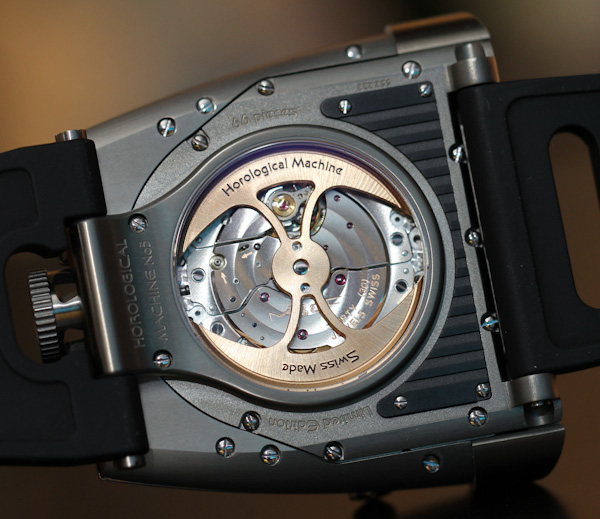 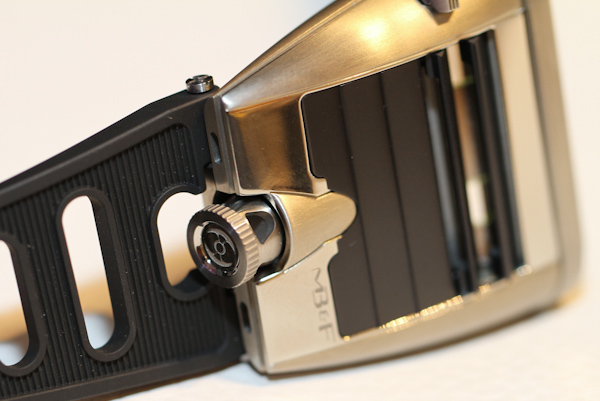 I find it interesting that the bottom of the watch is very different than the top. A good example are the screws. The top and sides of the case are totally clean. Turn it over and the bottom has tons of screws – and they look good. Though it might be a few too many screws depending on your taste. It overall makes for a fascinating contrast that helps the HM5 stand out as a complex design object even in its small form. This for me is artful engineering.

Attached to the case is a rubber strap that fits the character of the watch rather well. MB&F, you know I am still waiting for you guys to release something on a bracelet? Isn’t it about time? We never thought that Urwerk would come out with something on a bracelet and they finally did. What gives? Consider my arms crossed waiting for one. The rubber strap tapers and ends with a zirconium buckle. Rubber straps are difficult to make “high-end.” Basically you can use good rubber and offer interesting designs. This one has oblong-shaped port-hole style perforations. It is pretty cool, but my imagination wonders what it would look like on a bracelet. 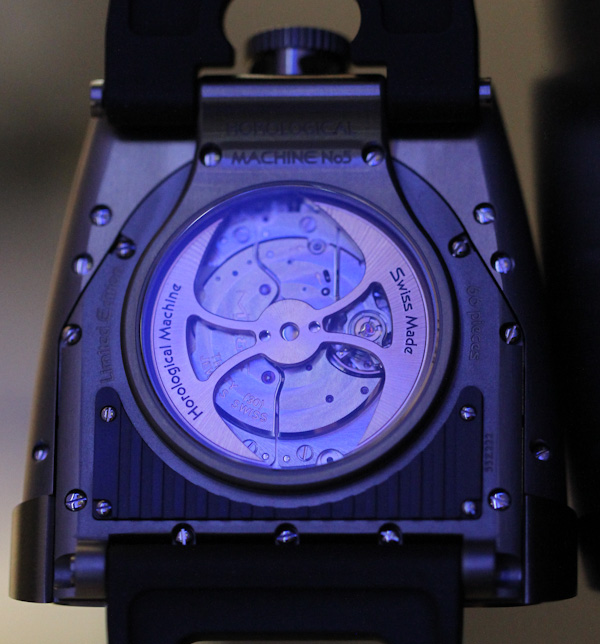 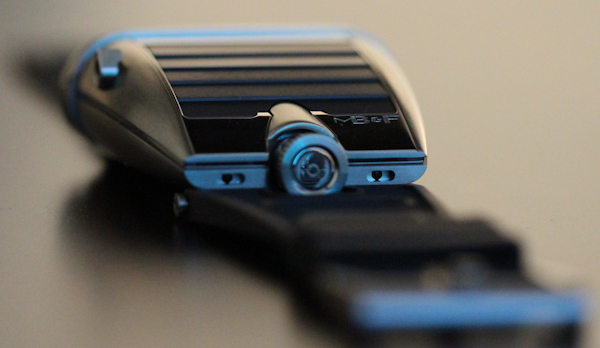 Once again, inside the HM5 is a mechanical automatic movement which is a base Girard-Perregaux. I find that a little bit ironic given it is one of the watches the HM5 was inspired by. The movement is visible through the sapphire display case back which has MB&F’s signature 22k gold “battle axe” rotor. That design logo shows up again engraved into the crown. For 2012 MB&F will produce 66 pieces of the Horological Machine No. 5 as a limited edition. They have confirmed that future versions in other colors and/or materials will come later – but it is unclear when. It is a very fascinating watch that once again is a razor sharp execution of the mission MB&F said they sought out to achieve with its design and concept. MB&F continues to prove their strong ability to tell stories and make art in functional, horological machines. Price for this version in zirconium is $63,000 making it the least expensive MB&F watch to date.

Necessary Data
>Brand: MB&F
>Model: HM5 “On The Road Again”
>Price: $63,000
>Would reviewer personally wear it: Yes
>Friend we’d recommend it to first: That rich 30-something guy you know who isn’t into “materialism or brands,” but ends up buying the best audio equipment and has no problem drinking otherwise collectible wine.
>Worst characteristic of watch: Having to take the time to constantly explain what it is to people.
>Best characteristic of watch: Beautiful yet polarizing case design will make you feel like a true aficionado.