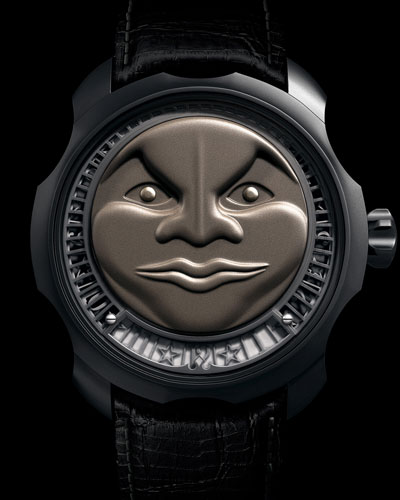 Helsinki, Finland. Not the typical place for watch makers, but it is where the wild Stepan Sarpaneva calls home and creates his vividly interesting timepieces creations. Playing with his popular moon face, Stepan creates a new watch that utterly features the now popularized serious looking artful lunar gaze. Called the Korona Moonshine, the watch tells the time via a single rotating disc that moves around the periphery of the dial.

You read the time in the lower region of the dial where a window opens up to reveal the moving disc. Right at the 6 o’clock position is a small arrow that is used in conjunction with indicators on the disc to tell the time. It isn’t the most precise way to tell the time, but the trade-off might be worth it to have this “face” on your wrist. 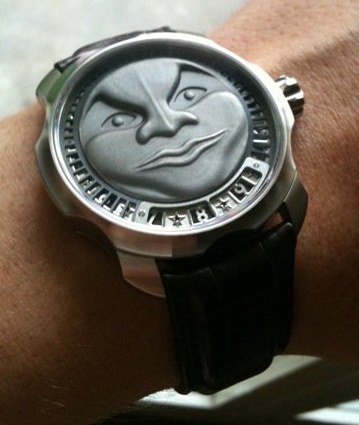 The time telling disc itself is covered in lume for night viewing. I think this is where the “shine” in moonshine comes in. It can be interpreted that the moon above the little window metaphorically provides the shine. Well, half of the disc is lumed. It is a 24 hour disc set up in four quadrants. Two of them contain lume. There are also stars on the disc. Why? because much of the time when a moon is placed on a watch dial, it is a accompanied by a few stars.

Sarpaneva’s “Korona” case is still sexy after a few years and various iterations of the watch. Stepan’s design for the Korona case is quite good, offering visual interest and necessary symmetry. There is a shot here of a prototype of the watch on Stepan Sarpaneva’s own wrist. You can see how well the Korona style case fits with the Moonshine concept. 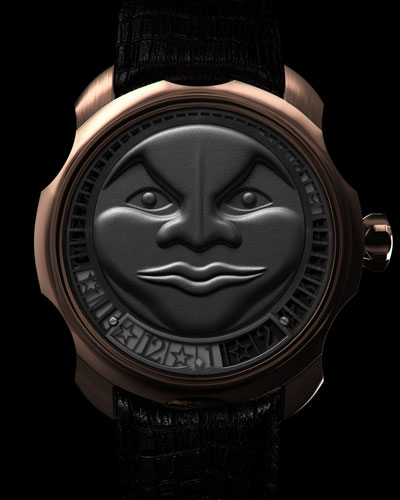 A watch like this is really about making a statement – much more so than other watches. Telling the time is second, and this piece is a testament to the enjoyment that many people have had looking at this more sober rendition of an anthropomorphized moon face. I first discussed these concept and pushed the issue further when writing about Sarpaneva here.

This is a rebel watch in a world of Swiss and French domination – though it does have the polished design that the larger high-end watch industry is known to value. There will be three versions of the watch. Two in steel, with one of those being DLC coated in black. There will also be an 18k red gold model available. The case itself is 42mm thick, with an AR coated sapphire crystal and water resistant to 50 meters. 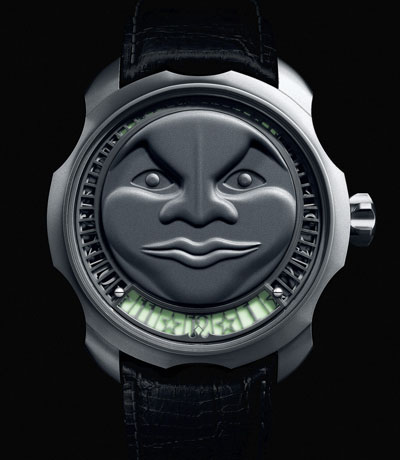 Inside the watch is a modified Soprod A-10 automatic movement that Stepan likes to use. You can see the movement through a skeletonized case back. Really a fantastic piece with a lot of hand-built character. You’ll be impressed by Sarpaneva’s larger offerings if you are new to the brand. Will the Korona Moonshine be your first Sarpaneva? Not likely. You are more likely to go with another Korona model where you can get the same moon face (smaller) on a slightly more traditional looking watch. Though for those are are very “sold” on the Sarpaneva concept, then a piece like this is a sure winner. It has a design with the requisite attention for details that Sarpaneva has been known for, as well as a craziness and attention grabbing spirit that its owners are often looking for.