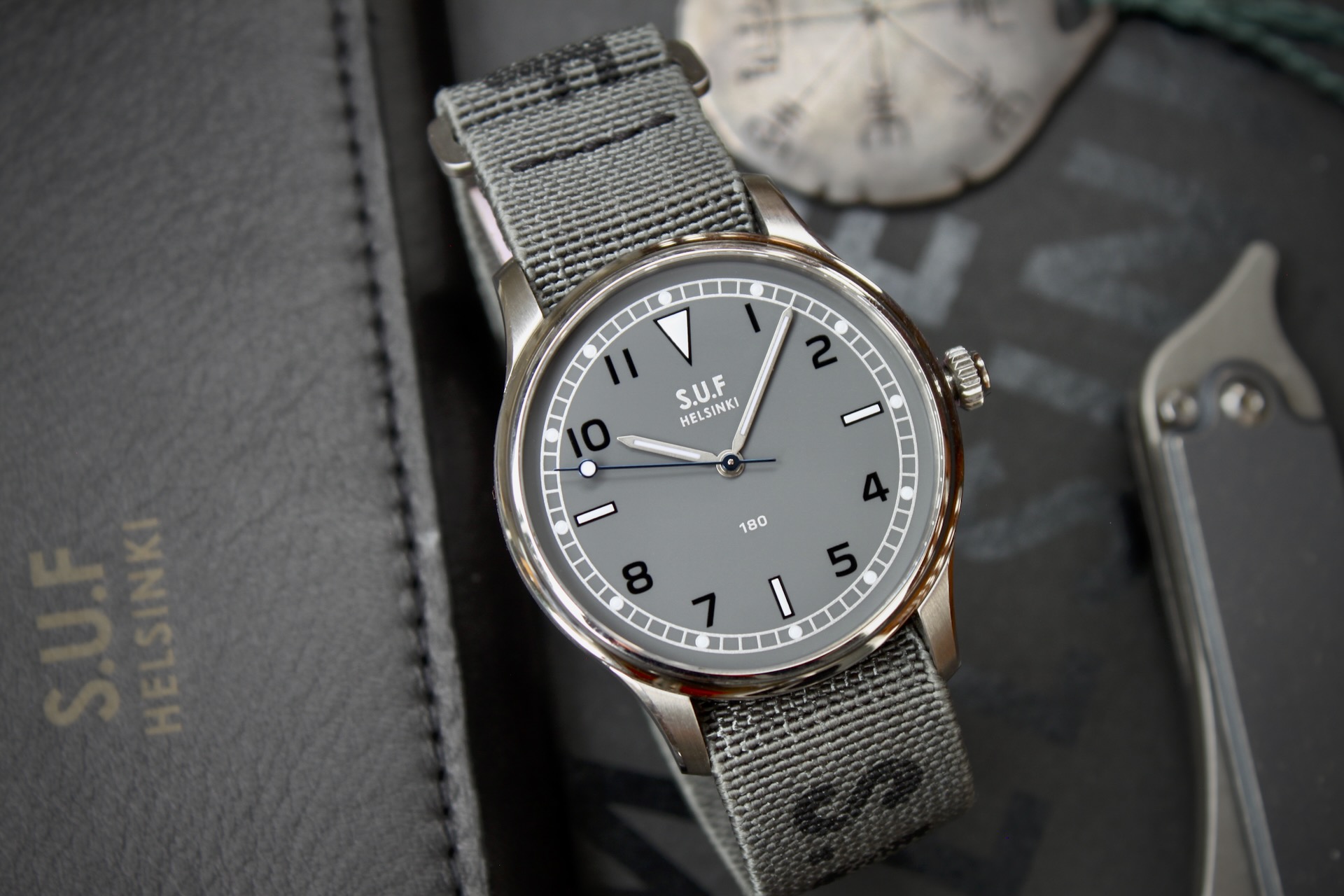 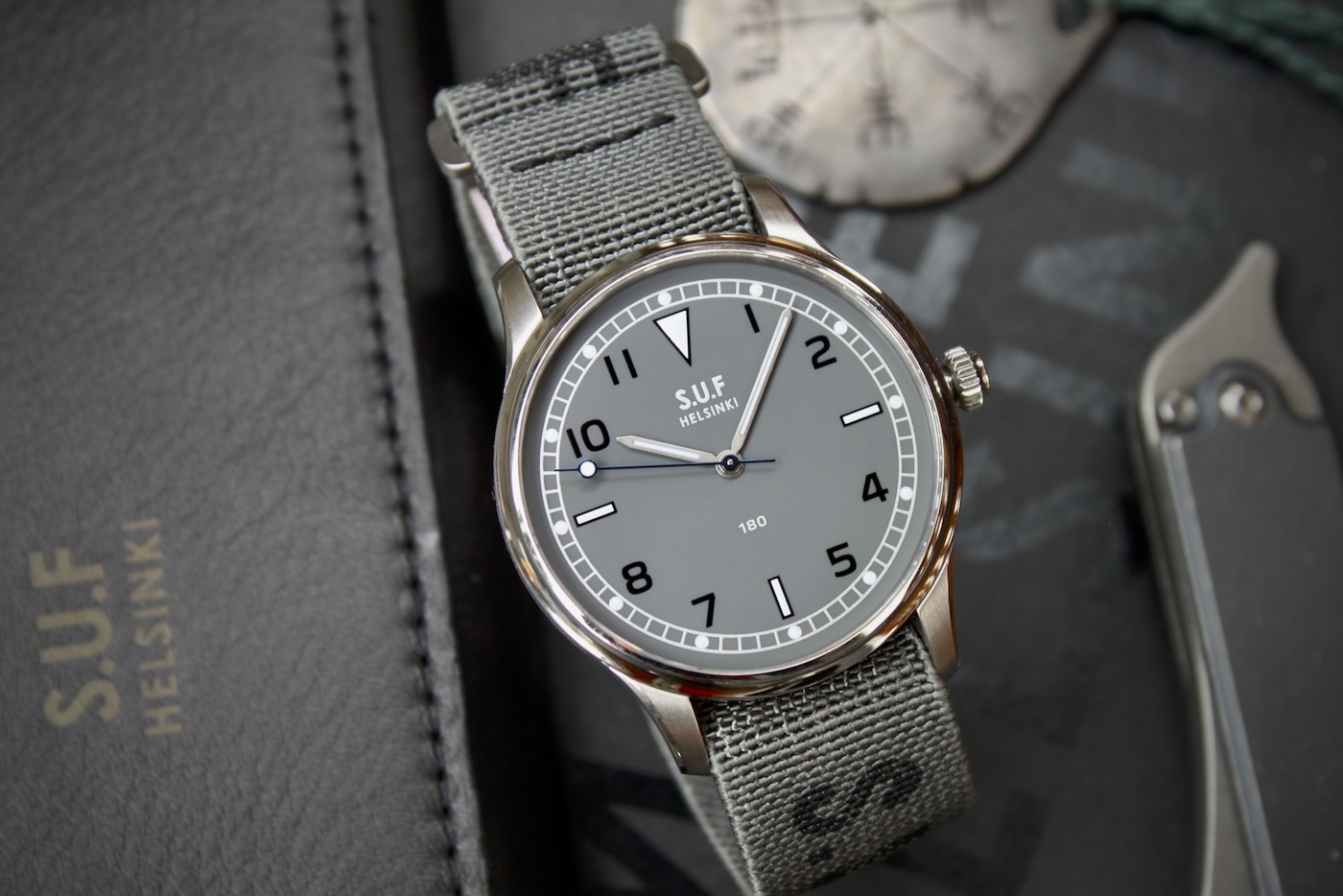 What happens when a world-renowned independent watchmaker known for creating watches with bold case designs and incredibly intricate dials decides to create a brand for the masses meant to be easily worn day in and day out? The answer is S.U.F Helsinki. Created by Stepan Sarpaneva, S.U.F Helsinki (short for SarpanevaUhrenFabrik) represents a major departure in terms of both style and price from Stepan Sarpaneva’s eponymous brand. Whereas Sarpaneva watches feature extensive hand-finishing and a nouveau-Gothic design language, watches under the S.U.F moniker, while still assembled in the same workshop, are typically much simpler and design, but all evoke the love of Sarpaneva’s Finnish homeland. In the case of the S.U.F Helsinki 180, reviewed here, the idea was to craft a classic field watch that was distinctly Finnish in its interpretation of the form. 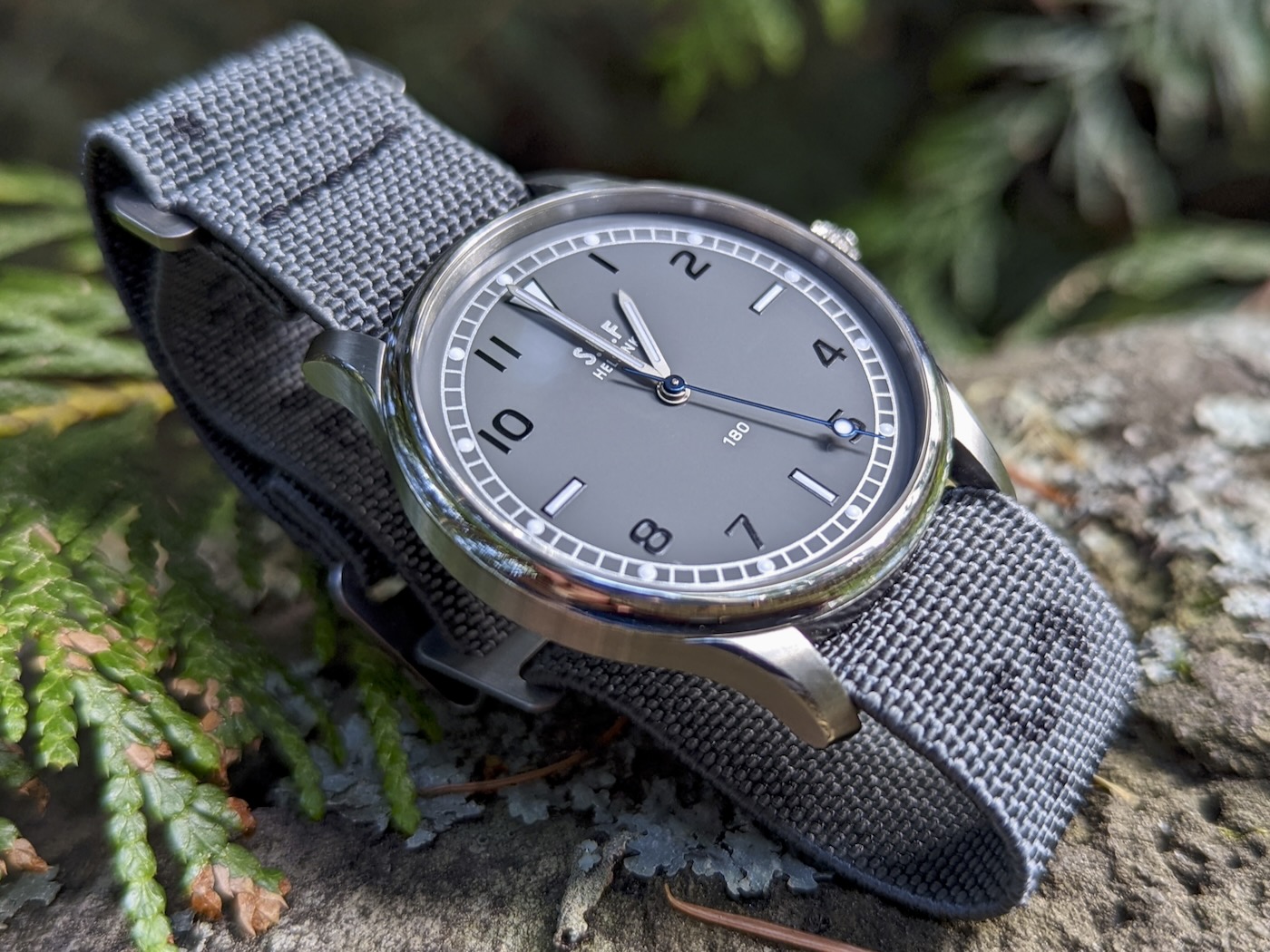 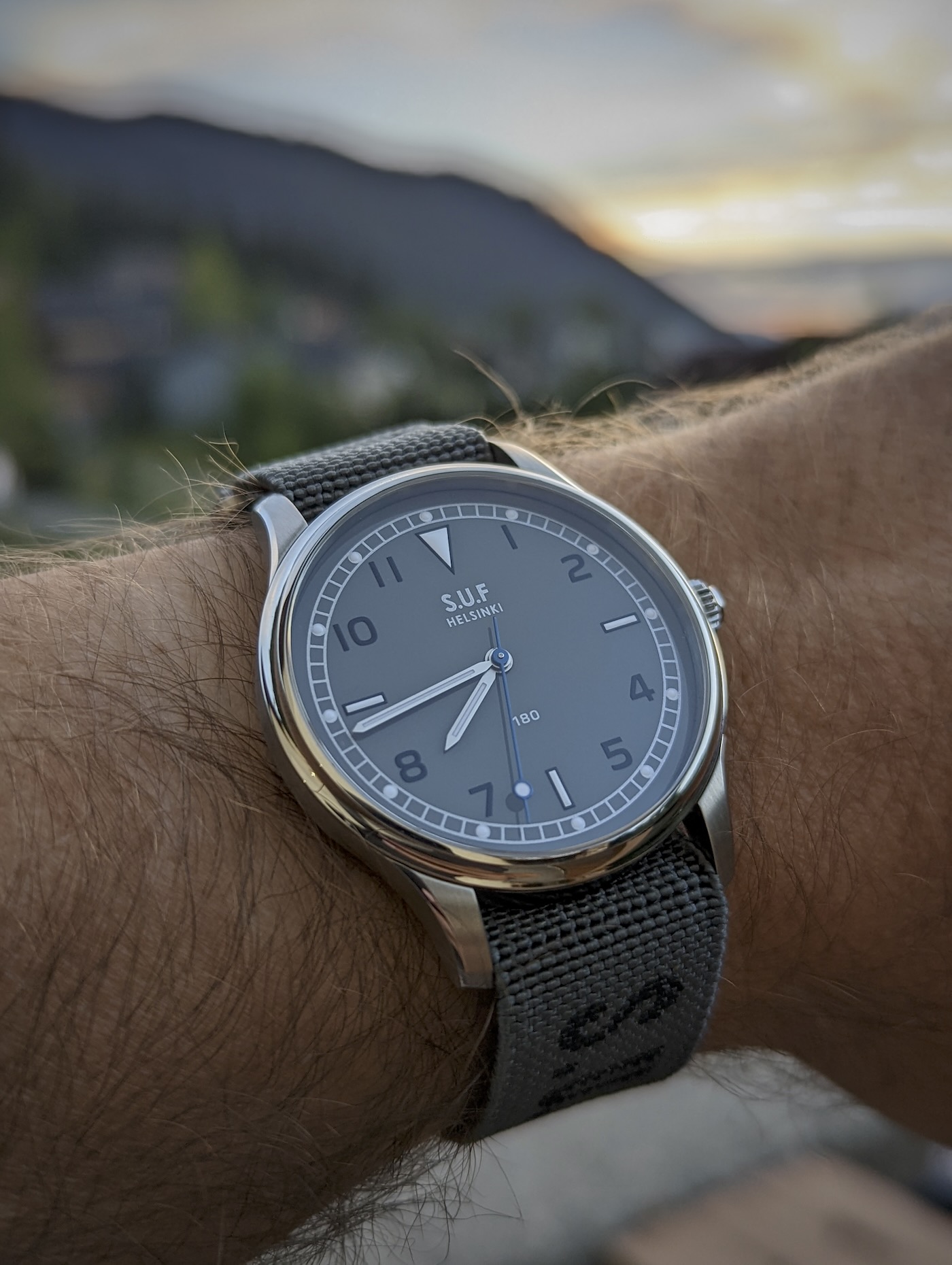 With a field watch, how much can you really do to create a watch that’s fresh and interesting within the austere constraints of the genre? If you’re Stepan Sarpaneva, it turns out, quite a bit. The 180 is instantly recognizable as a field watch — all the familiar elements are in place, from the Arabic numerals to the railroad minutes track to the modest case dimensions. Yet, there are enough changes — some subtle, some not — that put the 180 firmly in its own camp, allowing it to easily stand out as something special. If you’re wondering about the model name, the meaning is two fold. First, the 180 is the postal code of S.U.F’s workshop, located in the heart of Helsinki. Second, S.U.F describes 180 as a reminder to stop, see how far we’ve come, and take a moment to remember where we’re going. Either way, it’s a fitting name for a simple and stripped back, thoroughly Finnish field watch. 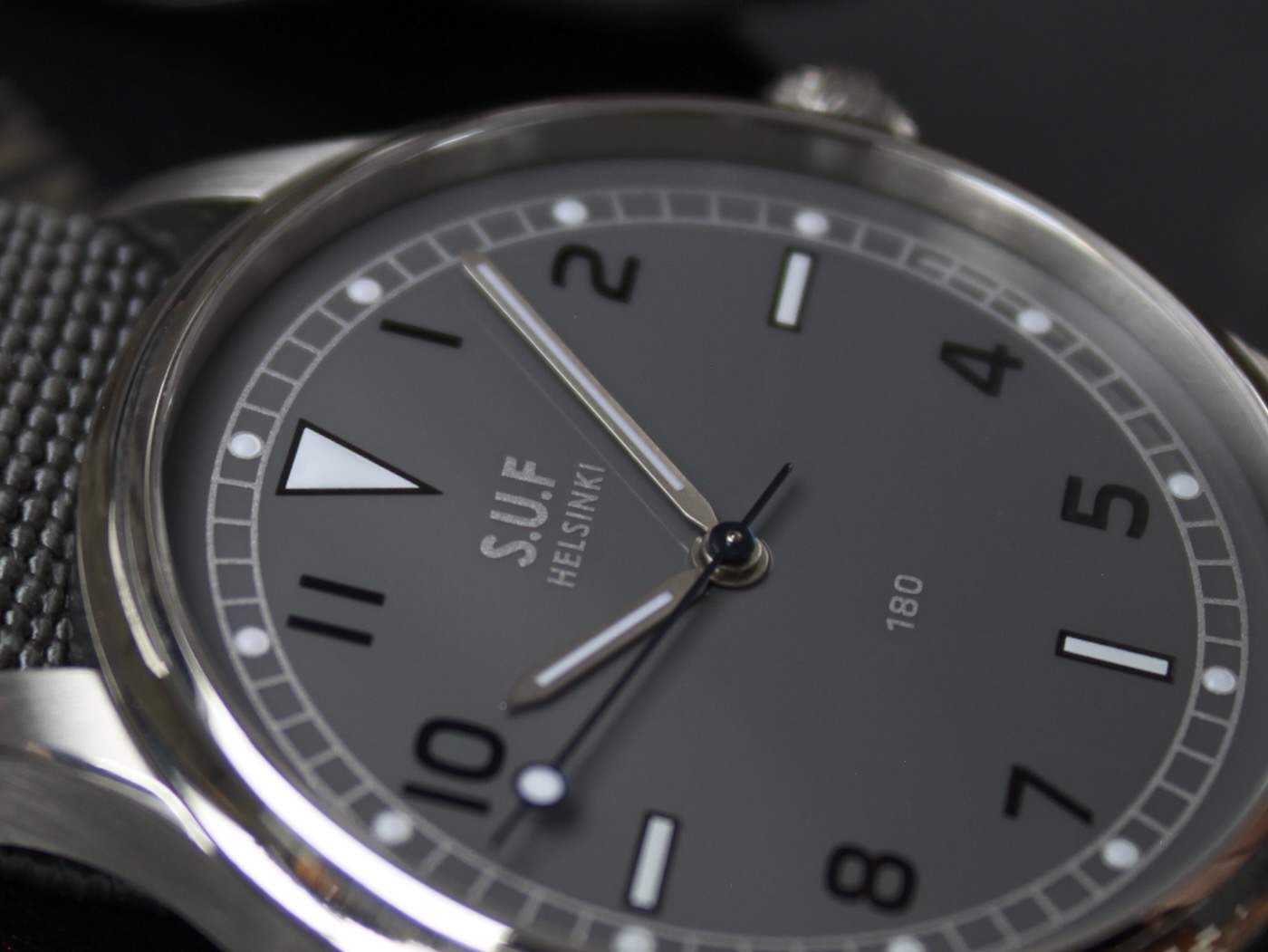 S.U.F describes their watches as “Finnish through-and-through” and the brand has gone all-in to figure out how to make that happen. For instance, the case is crafted from Outokumpu stainless steel. Also known as SUPRA 316L/4435, this is a domestically forged metal with chrome mined on the Finnish coast. Compared to standard 316L stainless steel, Outokumu steel has a higher corrosion resistance, is more durable, and allows S.U.F to get exactly the finish they’re after. Of course, the metal is just the start, it’s what you do with it that matters. For the 180, the case is a traditionally crafted one-piece design; you won’t find a movement ring, as the Soprod A10 movement slips straight in — a technique frequently employed on watches created in in the 1930s-50s. 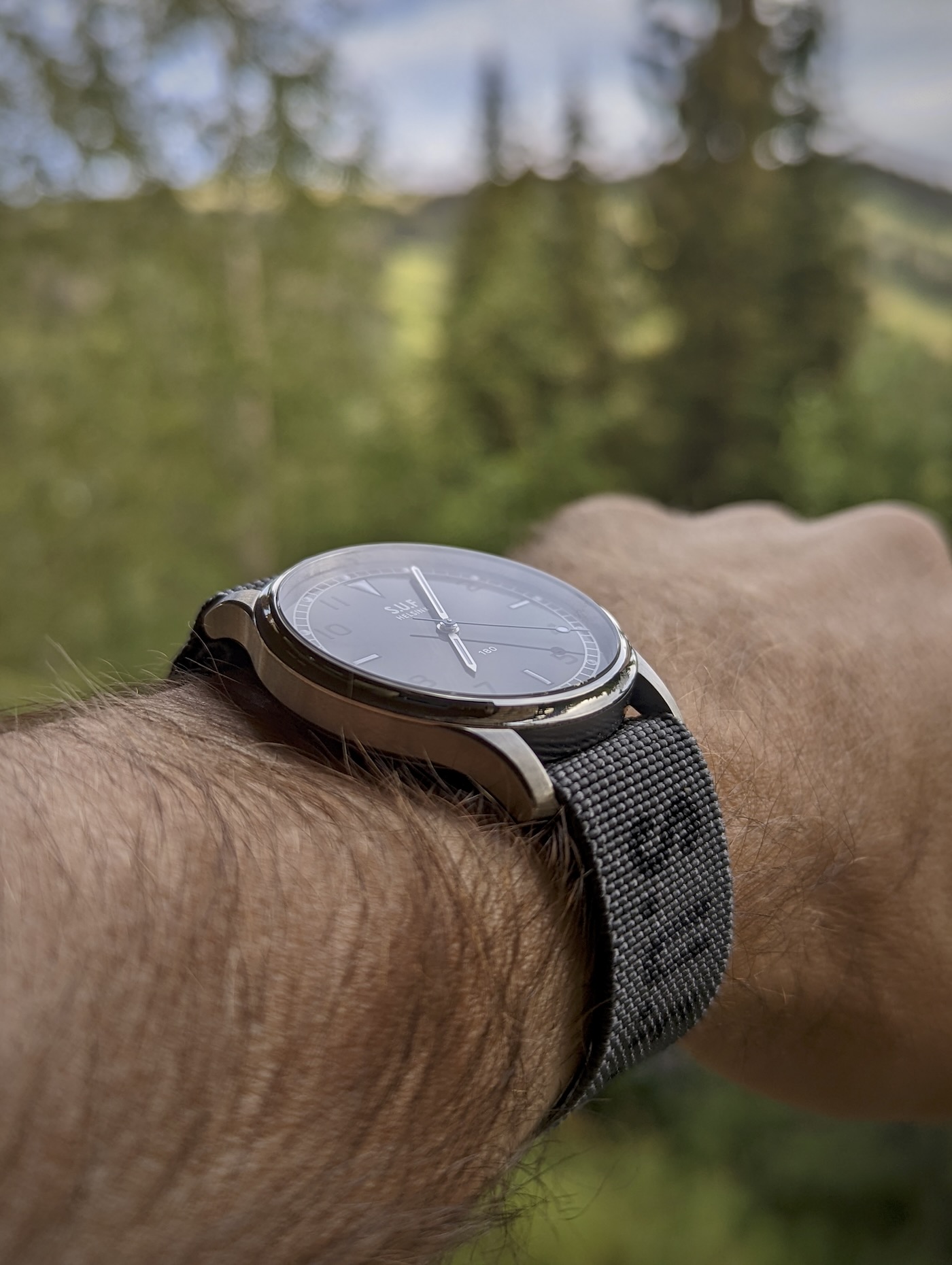 So, the case of the 180 is crafted from Finnish steel using traditional watchmaking techniques, but how does it wear on the wrist? The short answer is very, very well. The fact that the 180 is a pleasure to wear shouldn’t come as much of a surprise, given its dimensions. At 38.7mm in diameter, with a 46.4mm lug-to-lug distance and svelte 9.4mm case height, the 180 disappears on the wrist (for reference, my wrist is 6.75”). The nicely sloping lugs don’t hurt the ergonomics, either. As you’d expect for a watch coming out of Stepan Sarpaneva’s workshop, the case design and finishing are top-notch, with fine brushing on the sides and lugs, polished chamfers, and a polished bezel. The bezel is worth a closer look, as it is concave rather than the typical flat or convex bezel you’ll find on most watches. The result is that you still get that high-polish contrast around the dial, but with a lower risk of scratches. 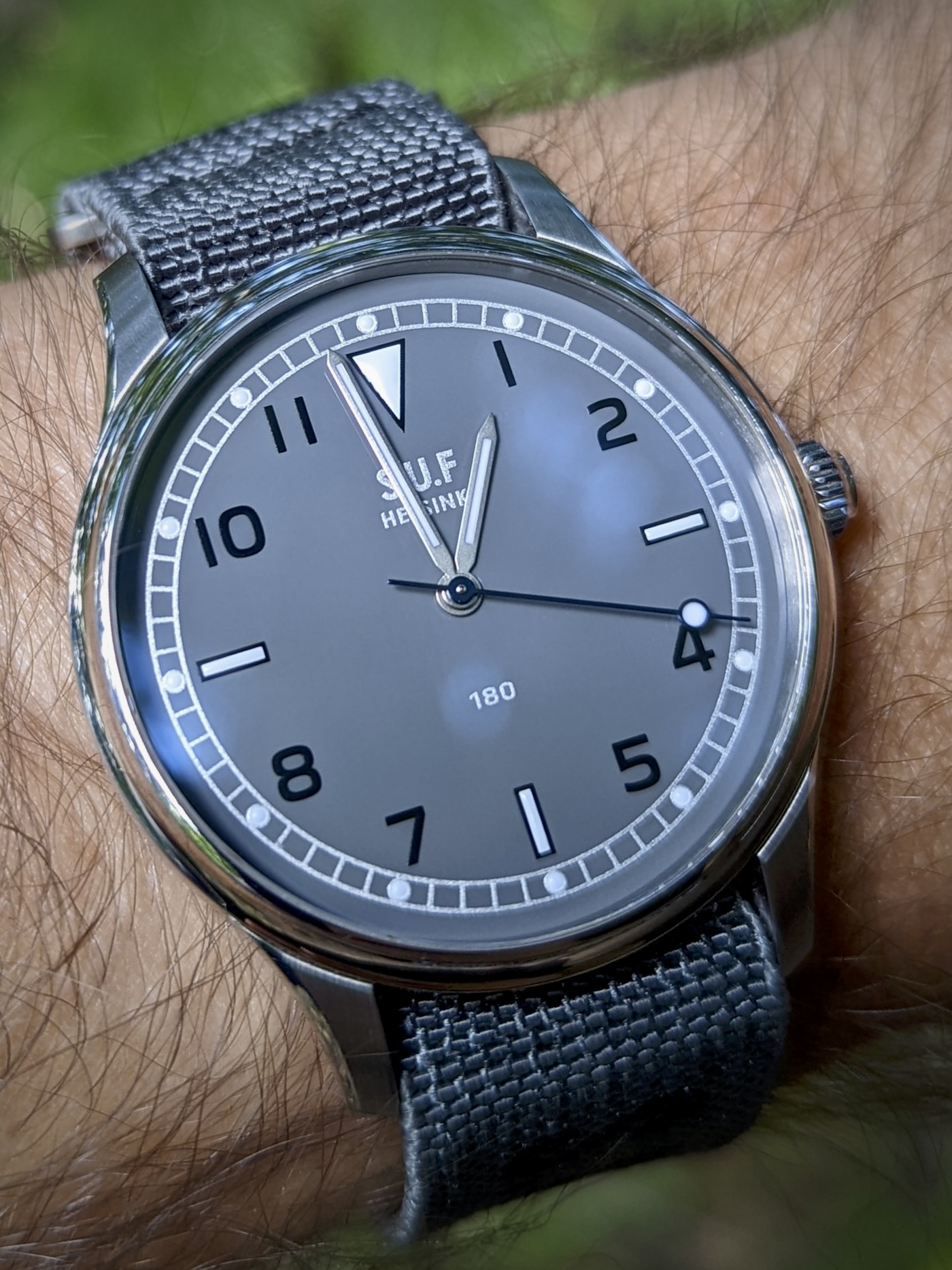 The crown on the 180 is small but easy enough to grip to set the time. Note, however, that the crown does not screw down. Not to worry, though, as the 180 is still water-resistant to 100m. One of the great things about this watch is that S.U.F doesn’t feel the need to pronounce the specs or provenance of the watch. The dial is sparse, and when you flip the watch over, you’ll find only a sapphire display caseback, but no additional text on the caseback. No water resistance rating, no “automatic winding.” Nothing. S.U.F simply figures if you’re buying one of their watches you know what you’re getting and you trust that it’s going to work for its intended purpose. 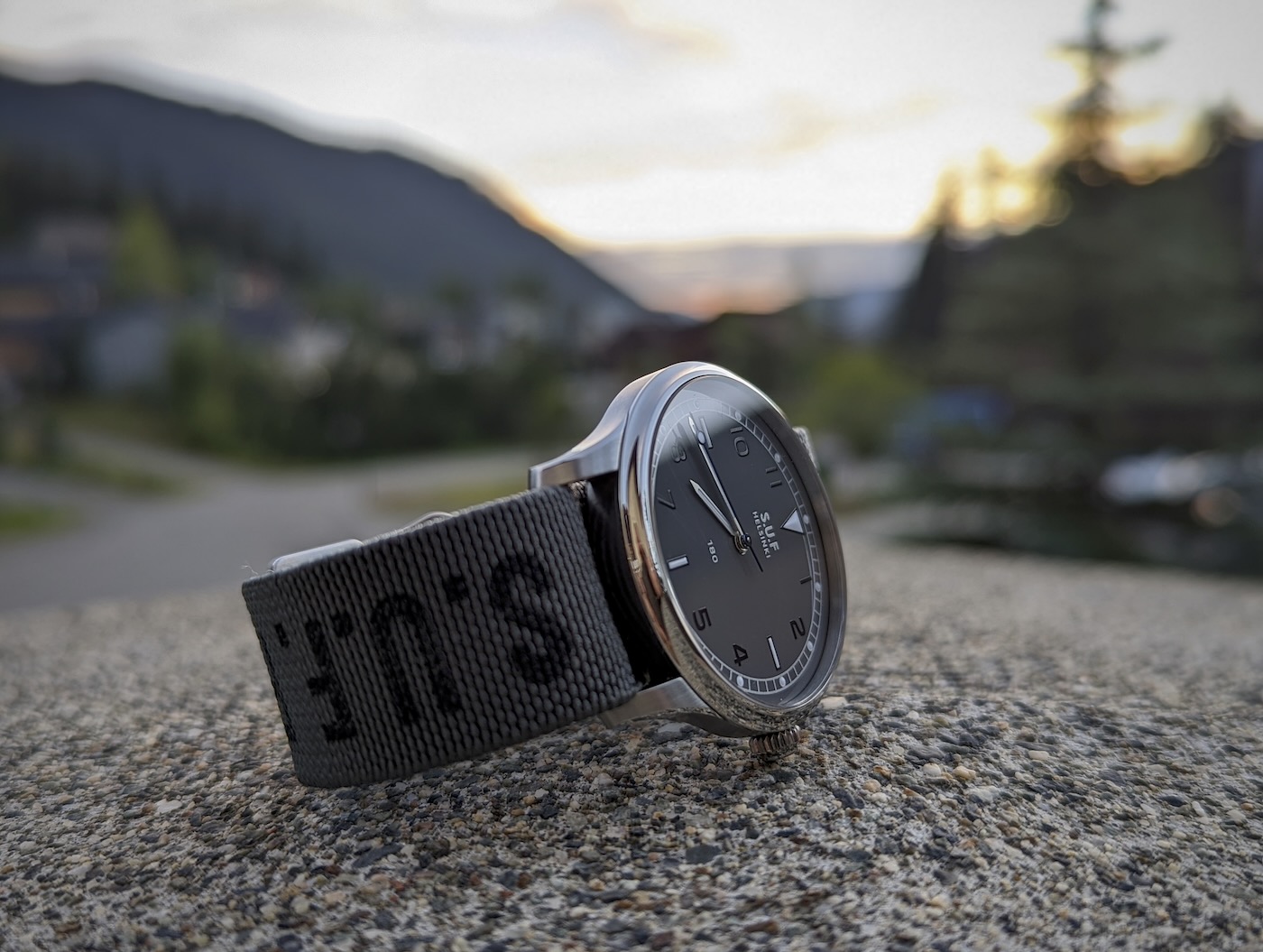 S.U.F Helsinki has released a number of different runs of the 180, each with a different dial color and overall look and feel. While each takes inspiration from some aspect of S.U.F’s Finnish homeland, the grey dial 180 truly seems to capture the color-shifting grey skies of a Nordic winter. The grey dial is hand-polished and not quite glossy, but not quite matte. Typical of grey dials, it’s a chameleon in the light, shifting from a true, medium grey to almost charcoal in low light. There are no other hues to be found, just pure grey. Against that grey background, the crisp white railroad minutes track and luminous markers just pop. What truly makes the dial work is the use of black Arabic numerals instead of white, along with the silver text on the dial. Sure, those seem like small touches, but in a watch as stripped down as this, it’s the small touches that matter. The black numerals stand out stark against the grey dial in the sunlight but nearly disappear in low light, adding to the dynamic look of the dial. Add in the heat-blued seconds hand and all these little touches all add up to create a dial that’s unique while staying well within the bounds of the genre. It’s this attention to color, proportion, and execution that sets the S.U.F Helsinki 180 Grey apart. 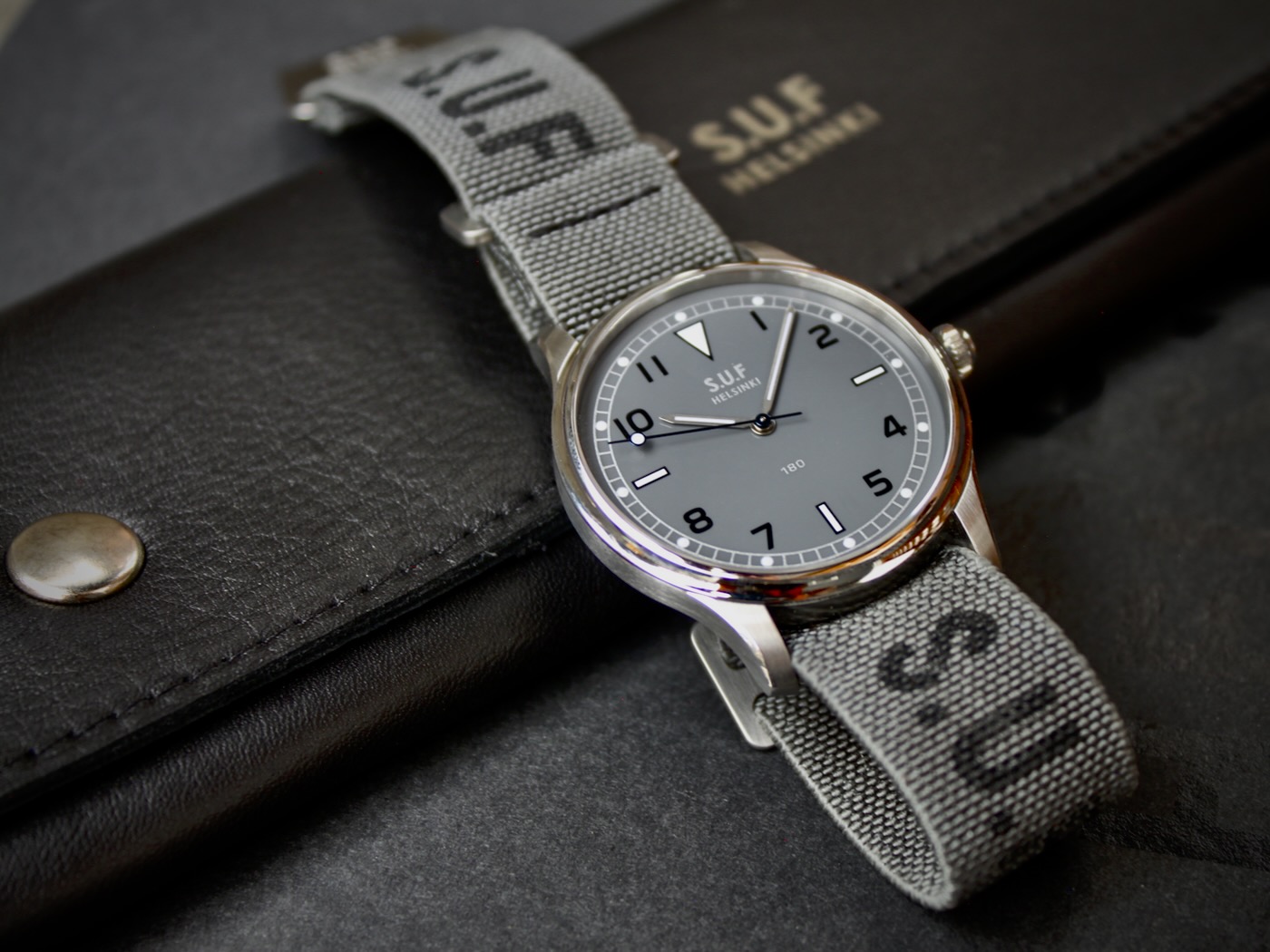 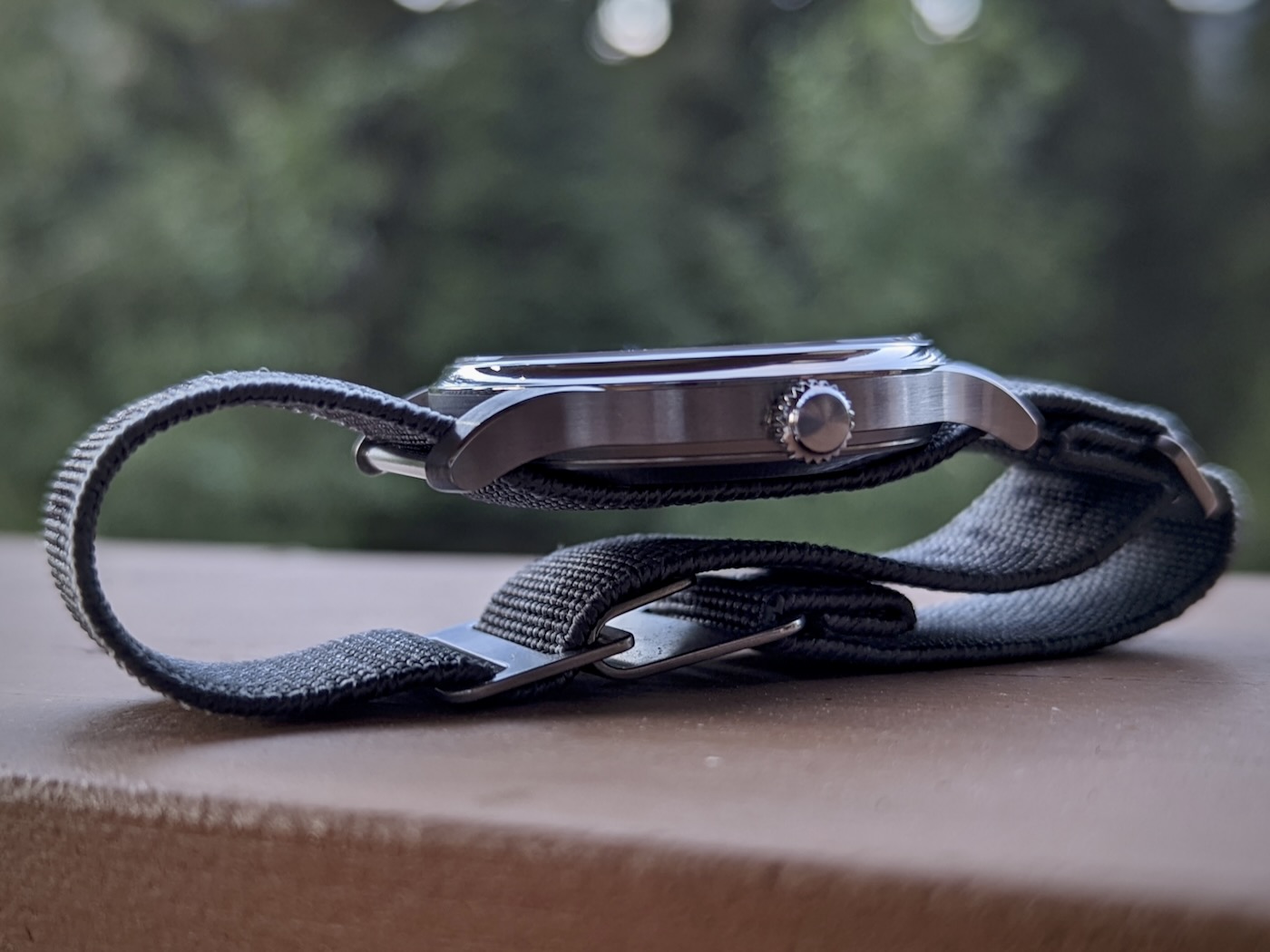 The watch comes packaged in supple and functional leather travel wallet. And keeping the Finnish theme going, you can opt for a Nordic elk leather strap for the watch. Our review piece, however, came fitted to a custom Erika’s Originals Marine Nationale strap. Though not made in Finland, these are superbly comfortable straps handmade in Valencia, Spain. For those unfamiliar, Erika’s Originals straps are one-piece straps made of an elastic fabric similar to the parachute straps used in the original Marine Nationale straps. The straps are infinitely adjustable and the stretchy fabric makes them ridiculously comfortable. S.U.F personalized this strap with a custom buckle and S.U.F Family text on the strap, though there are plenty of color options on the brand’s website. Though this is a watch that will work on almost any strap, the Erika’s Originals was so comfortable it was hard to try anything else. 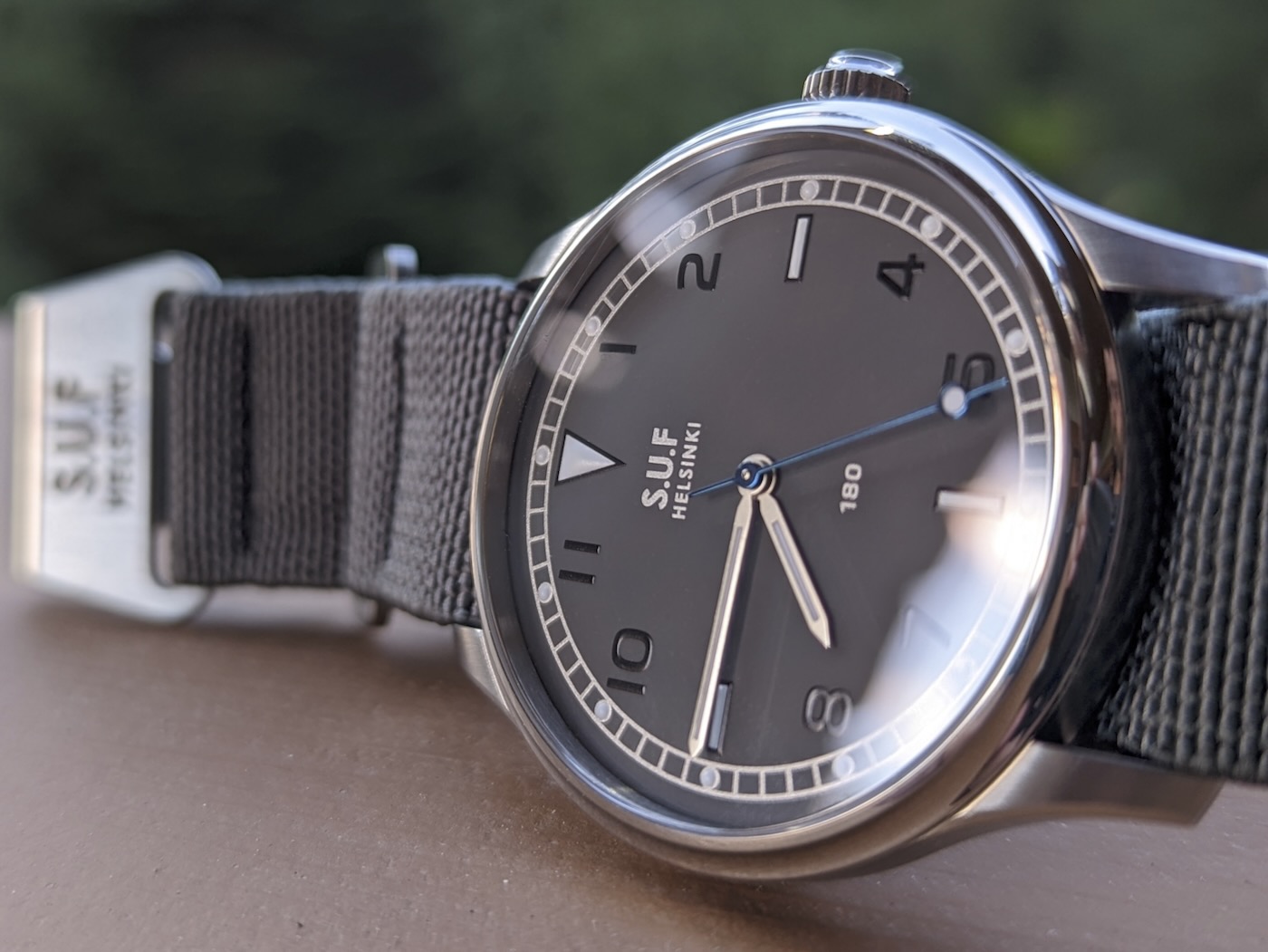 If you’re more of a bracelet person, S.U.F does make a handsome three-link bracelet with butterfly clasp that gives the 180 a completely different aesthetic that’s more elegant and sporty. Alas, the bracelet isn’t made from the same Finnish steel as the case, but it is made in Switzerland by Maison Maspoli SA — a manufacturer of very, very nice bracelets for many high-end brands. So, if you prefer bracelets, you have an excellent option for a €500 upcharge. 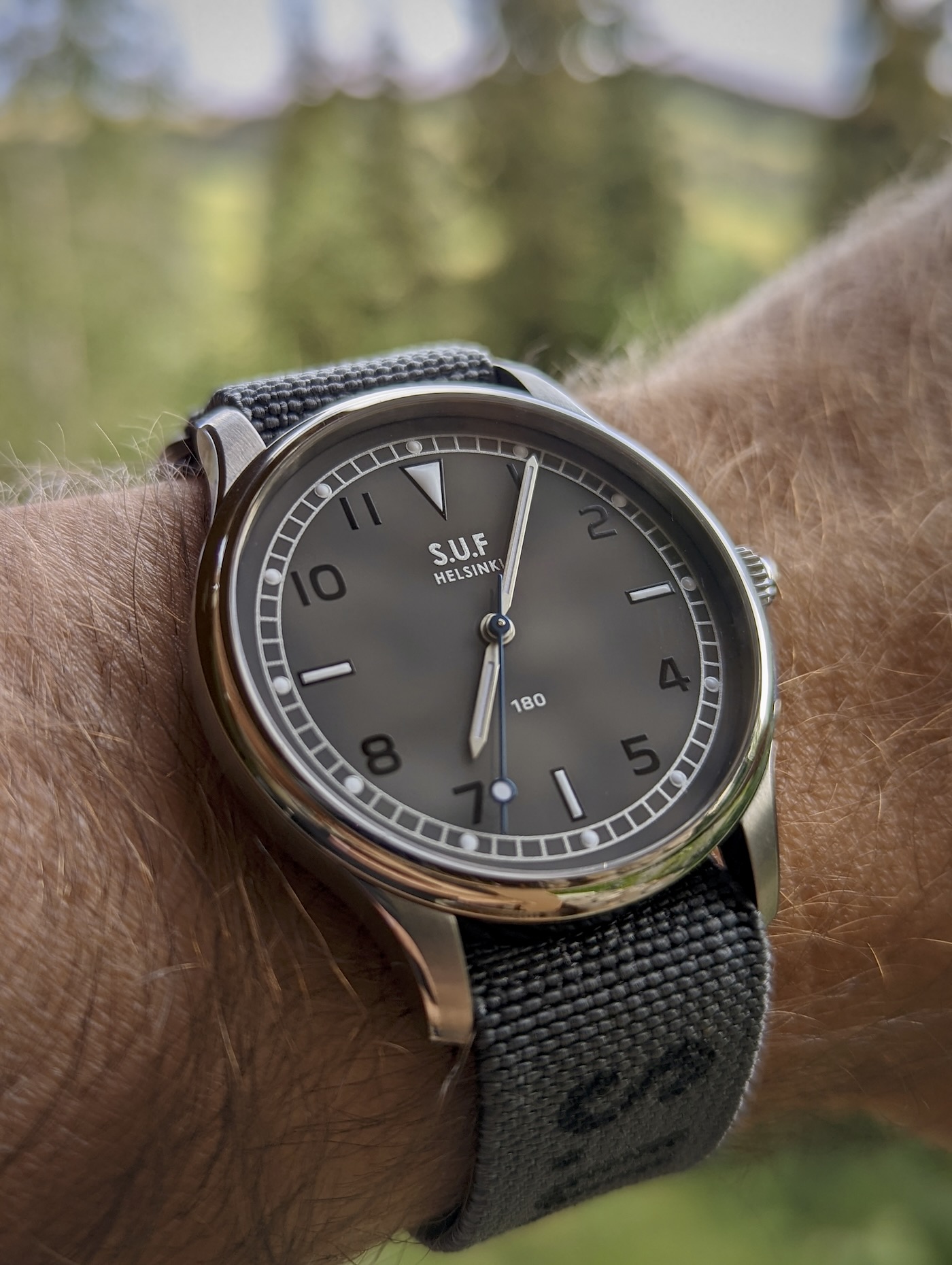 The S.U.F 180 is powered by a Soprod A10 automatic movement. This Swiss movement beats at 28.8kbph and features 42 hours of power reserve. The Soprod A10 is visible behind the sapphire caseback, allowing you to view the rhodium plating, perlage, and Côtes de Genève finishing on the movement. Sure, you’re not getting an in-house caliber like the Sarpaneva Movement, but you do get a reliable, easily serviceable movement that’s been fully checked, correctly oiled, and regulated at the Sarpaneva workshop. For a field watch, the Soprod A10 is a great match and a nice alternative to the Swiss standards like ETA and Sellita. 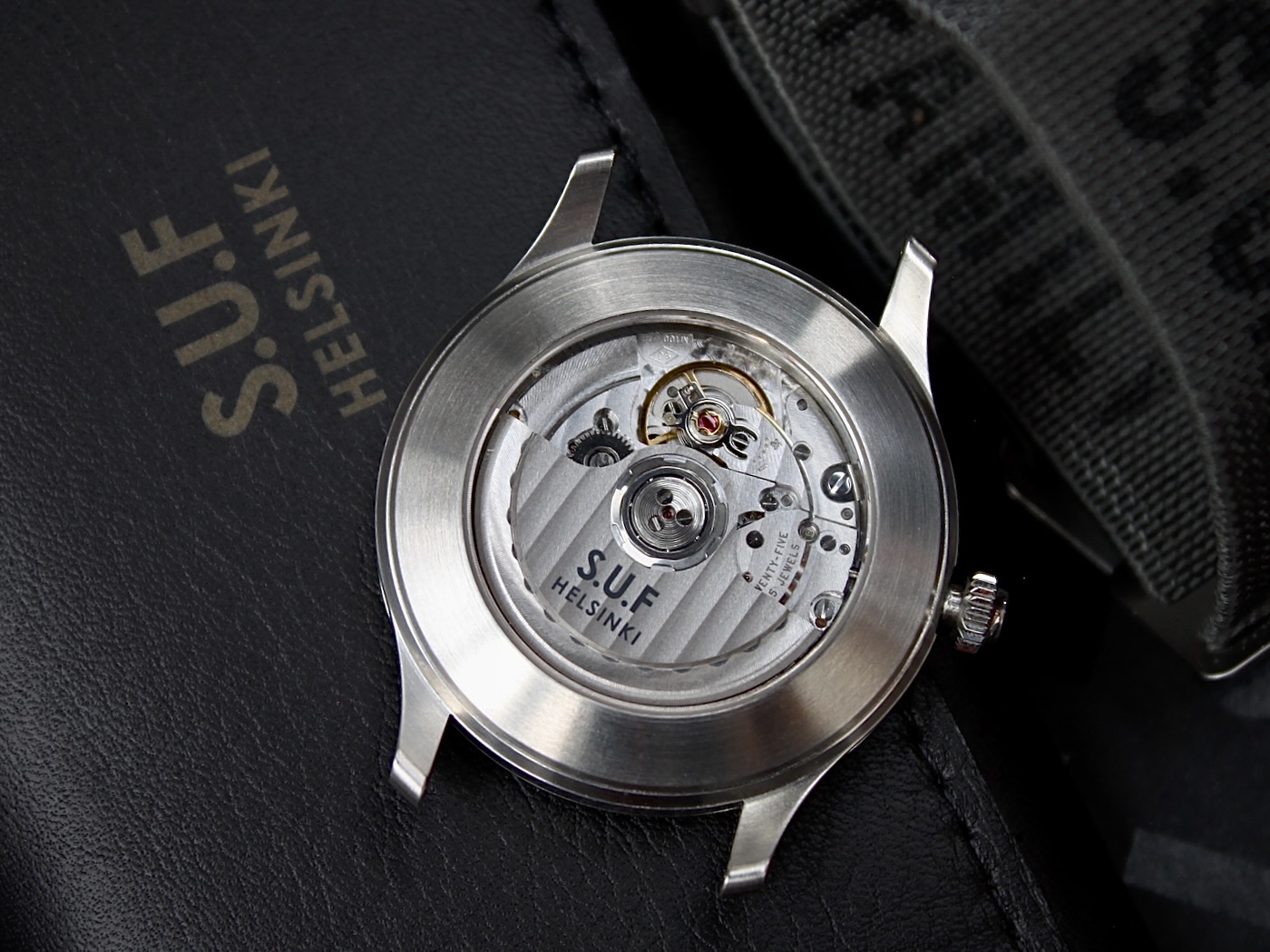 The 180 isn’t flashy; it doesn’t have a ridiculous depth rating, an in-house movement, or flashy accouterments like applied indices, a textured dial, or even a date window. But that’s exactly the beauty of this watch. It’s a stripped-down field watch that’s executed extremely well. And, if you look closely, you’ll find little touches that make the piece something truly special. From the Finnish steel to the one-piece case construction and subtly concave bezel to the crisp printing on the dial, everything is executed to the standard that you’d expect from someone like Stepan Sarpaneva. While writing this review, S.U.F released another 180, the Mustikka, in a deep blue fume dial, but all 26 pieces sold out before this review went live. Like all S.U.F 180s, the Grey is limited and only 50 pieces of the 180 grey are available. And once they’re gone, they’re gone. There may be more 180s down the road, but S.U.F won’t repeat the colorway. 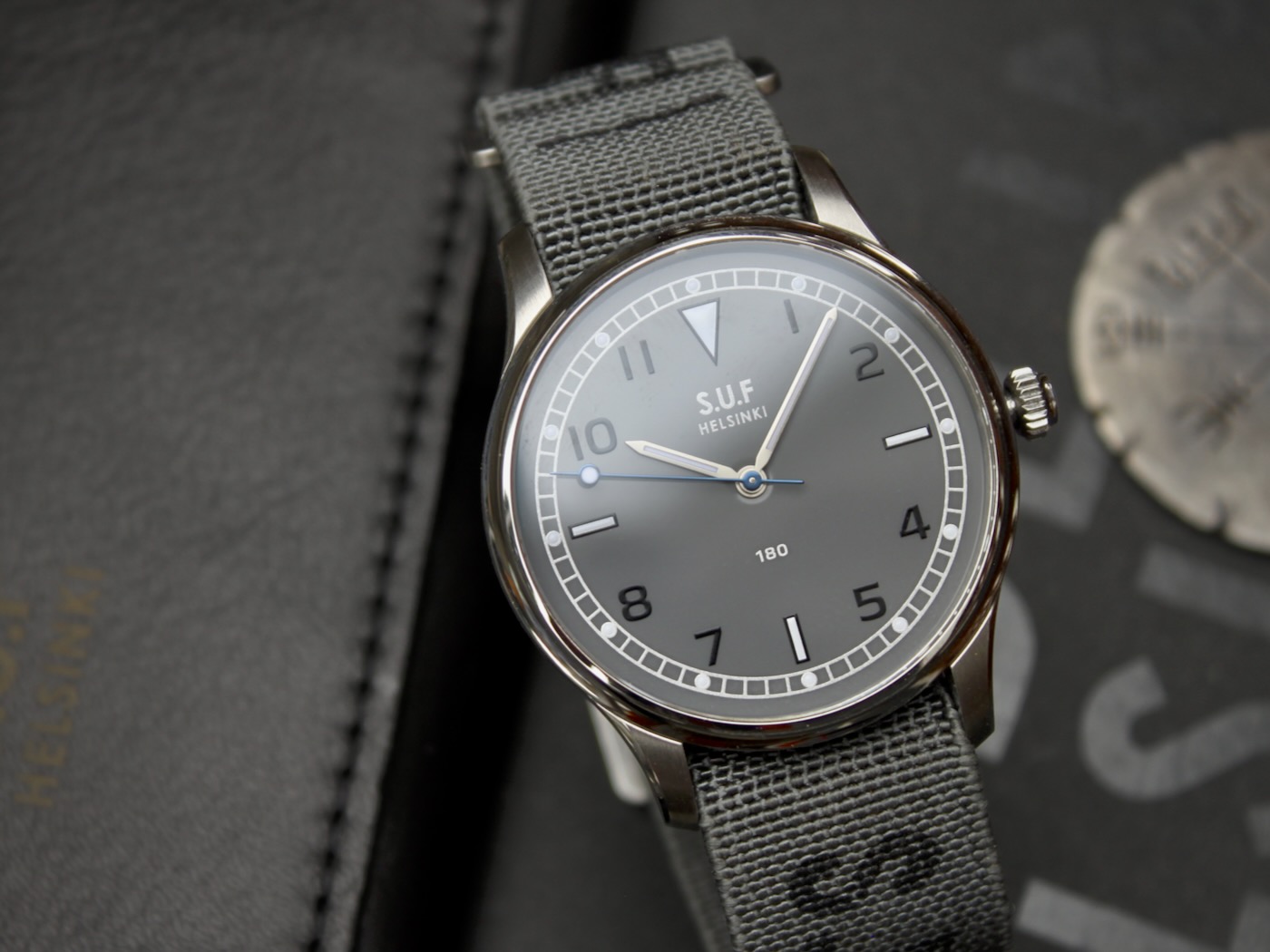 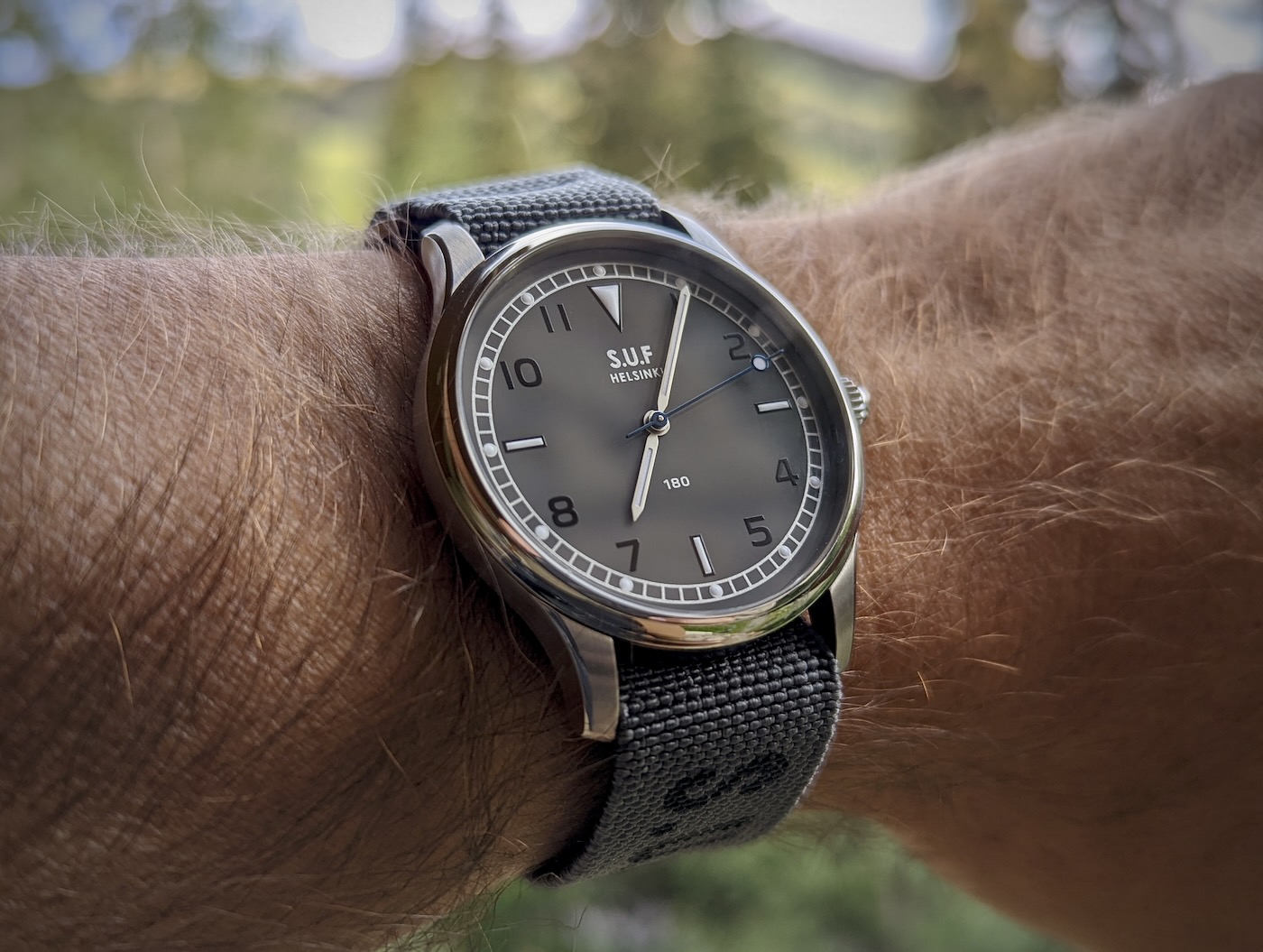 The S.U.F Helsinki 180 Grey comes in at €2,500 (€3,000 on bracelet) before taxes. The price certainly isn’t inexpensive, but for those looking for an extremely well-executed field watch created with plenty of Finnish sisu, the 180 is an utterly charming piece that absolutely delivers. To learn more about S.U.F Helsinki and the 180 Grey, please visit the brand’s website.

Necessary Data
>Brand: S.U.F Helsinki
>Model: 180 Grey
>Price: €2,500 (€3,000 on bracelet) before taxes
>Size: 38.7mm diameter, 46.4mm lug-to-lug, 9.4mm height, 20mm lug width
>When reviewer would personally wear it: Anytime; particularly well-suited to being a daily wear, especially with spending ample time outdoors
>Friend we’d recommend it to first: Someone that appreciates minimalism and simplicity in design executed to a high standard. Or someone enamored with Nordic culture.
>Best characteristic of watch: Harmonious design elements, comfort, and a captivating dial.
>Worst characteristic of watch: A screw-down crown would be nice for peace of mind.