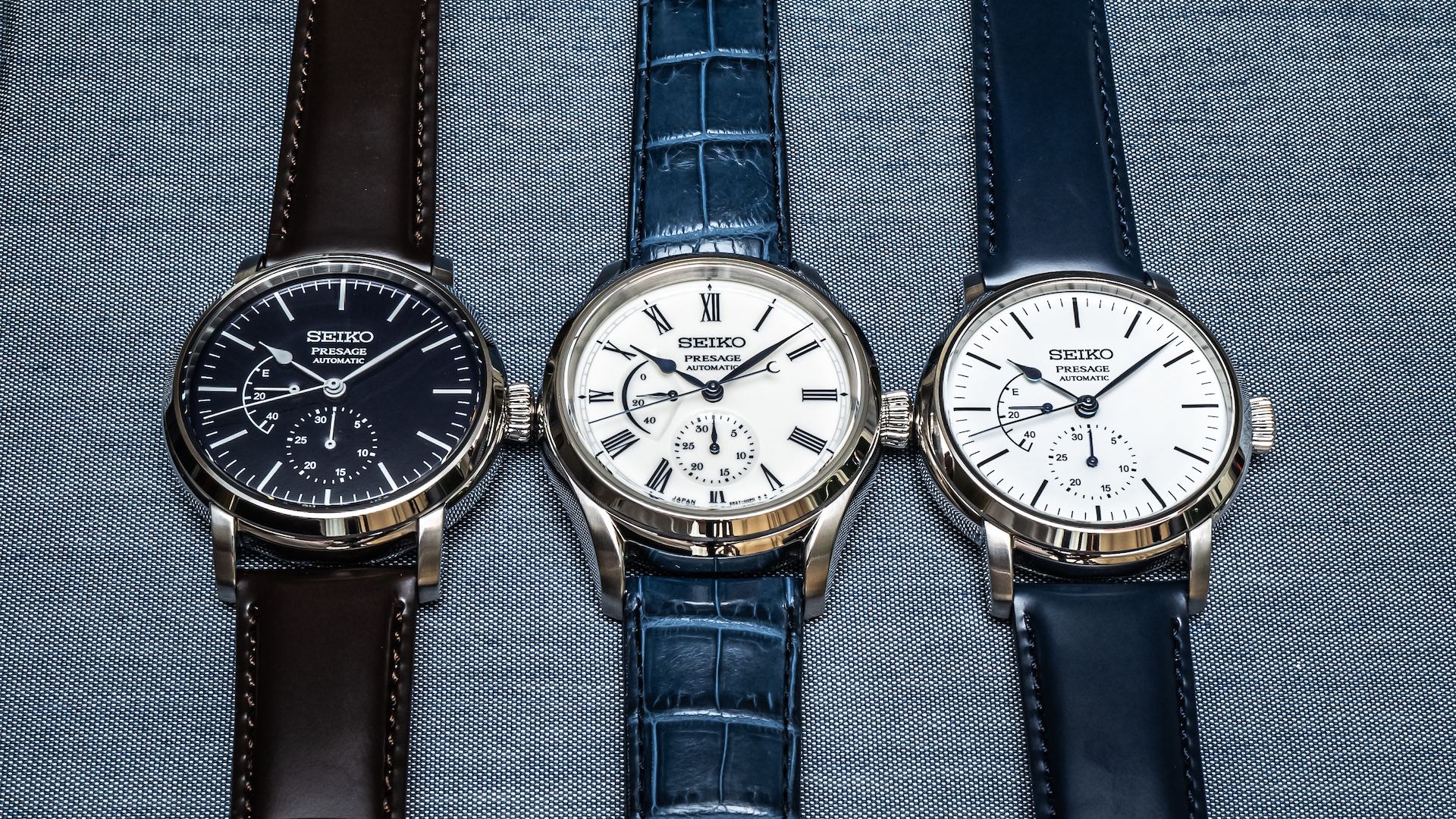 Seiko’s new Presage trio are near exemplars of what the industry should strive for when designing and building a dress watch in 2020. Not “fast fashion” watch cheap, but handle these in the metal and it’s clear that Seiko respects, and more than makes it worth, the extra month or two of saving up from one’s paycheck. With two new enamel dial offerings that lean toward a uniquely Japanese take on minimalism and a more traditional limited-edition porcelain dial, Presage (the SPB045 from 2017 was essentially an enamel dial version of this), Seiko makes a strong case to collectors seeking that special Japanese dial work of higher-end models and Grand Seiko without the considerably higher cost. 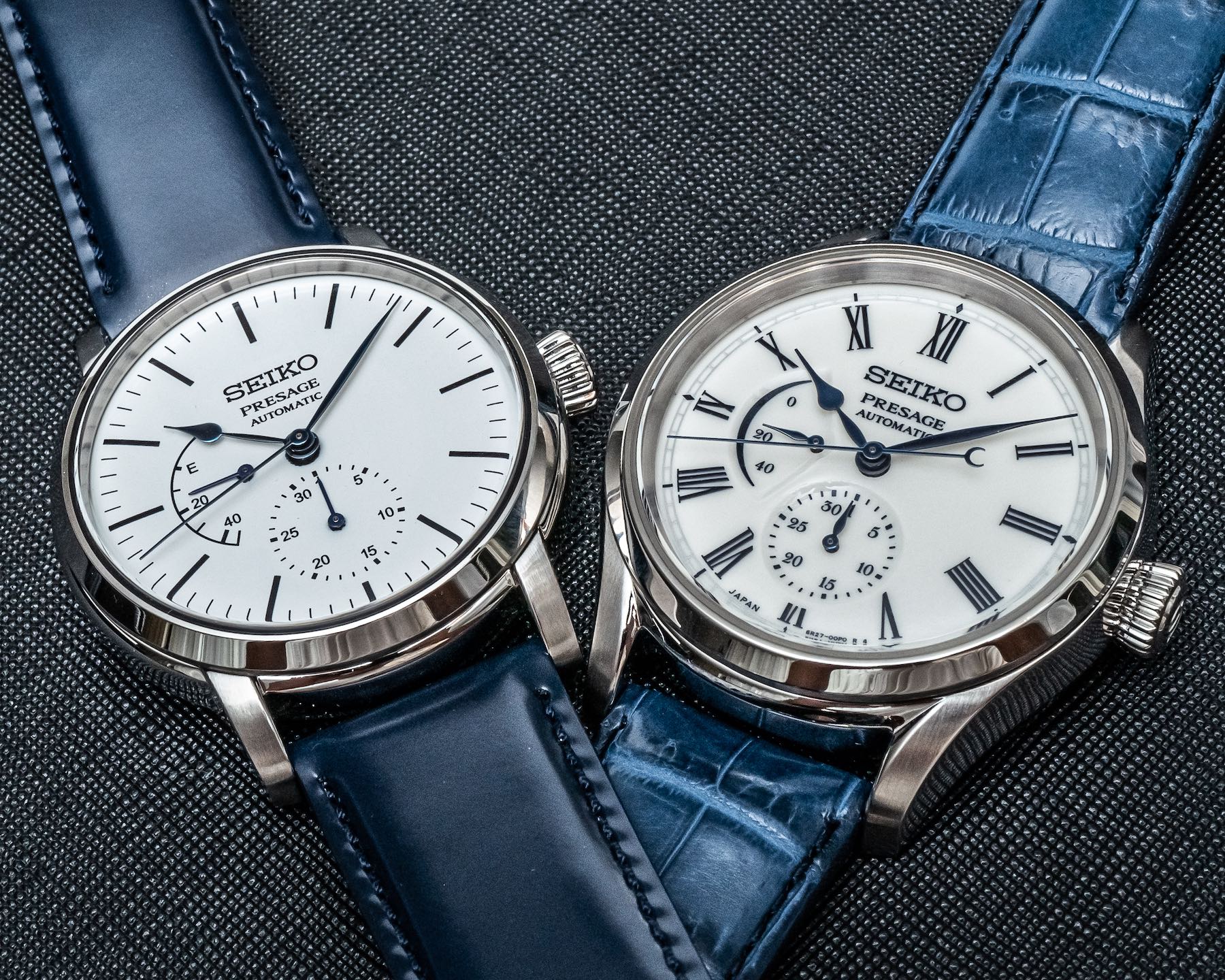 I’d also like to note that I am not really a dial symmetry fetishist, nor do I consider two subdials as “clutter.” I suspect some will disagree with that statement but, as with most things in life, it’s all a matter of taste. That being said, would I prefer the power reserve indicator on the case back? Obviously. 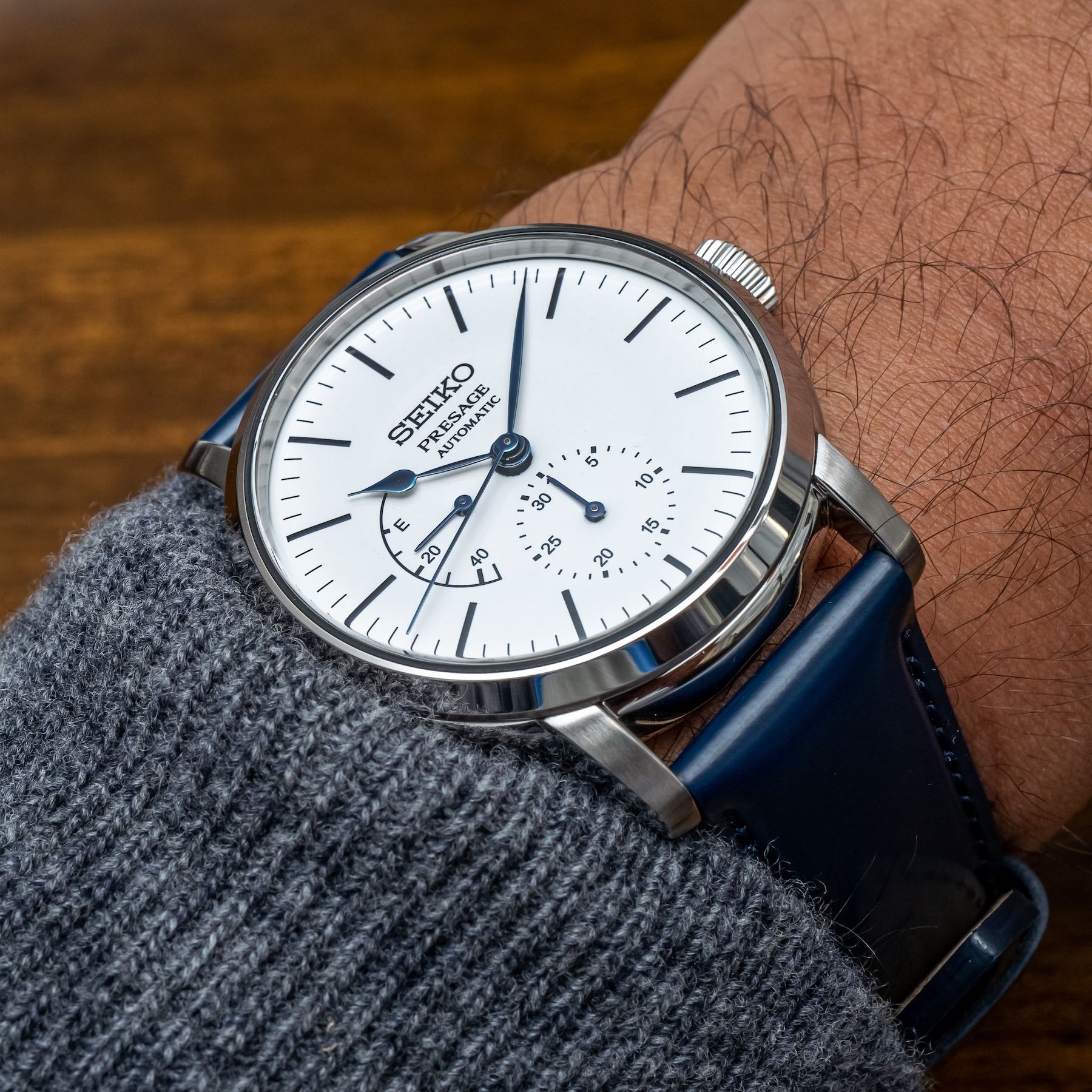 I find that this dial can be approached similarly to the Max Bill albeit with a Japanese design, and one that is sui generis to Seiko at this point. Where the former is starkly minimal in its particular take on Bauhaus, the latter retains a decorative flair that Seiko founder Kintaro Hattori valued. Dating back to 1913, the Laurel was the first Seiko watch, done in a white enamel dial and the laurel-shaped hour hand that was echoed in Riki Watanabe’s clock design and has now been inherited by these new Presage watches. Not beholden to the design of the Laurel or some recent Presage design, the red text that we sometimes saw at 12 o’clock is not present. In fact, the design of the minute and hour indices is clearly inspired by Watanabe’s clock design, producing a cleaner and more casual dial as a result. 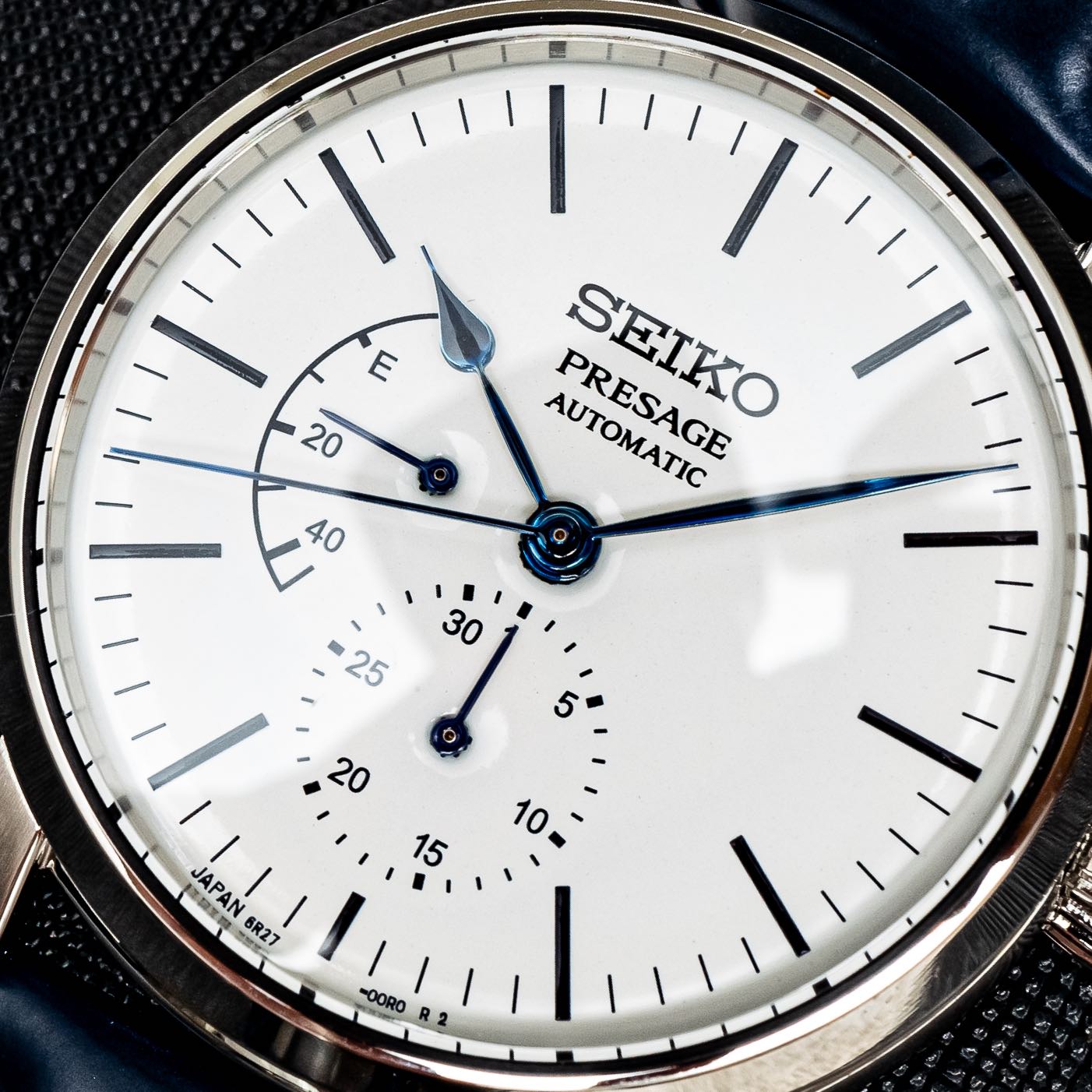 The hands are a nice length, and both the blue hands against the white enamel background, as well as white hands against dark blue enamel background, are highly legible, aided by an inner layer of anti-reflective coating on the sapphire crystal. The practical need for an indicator for a 45-hour power reserve aside, the pairing of this arc and pointer at 9 o’clock plus date subdial at 6 o’clock has become a signature for certain Presage watches, albeit an admittedly idiosyncratic one. Closer inspection of the dials will show the enamel surface curve to create an inner ring as well as framing around the subdials. Seiko’s Enamel Craftsman Mitsuru Yokosawa is the man behind all the fired enamel dial work on the SPB161 and SPB163, and considering that he has been perfecting his technique since 1971, it’s clear that Mr. Yokosawa is a valuable talent at the brand. (For anyone interested in reading and learning more about Mr. Yokosawa, Seiko has a good resource here). 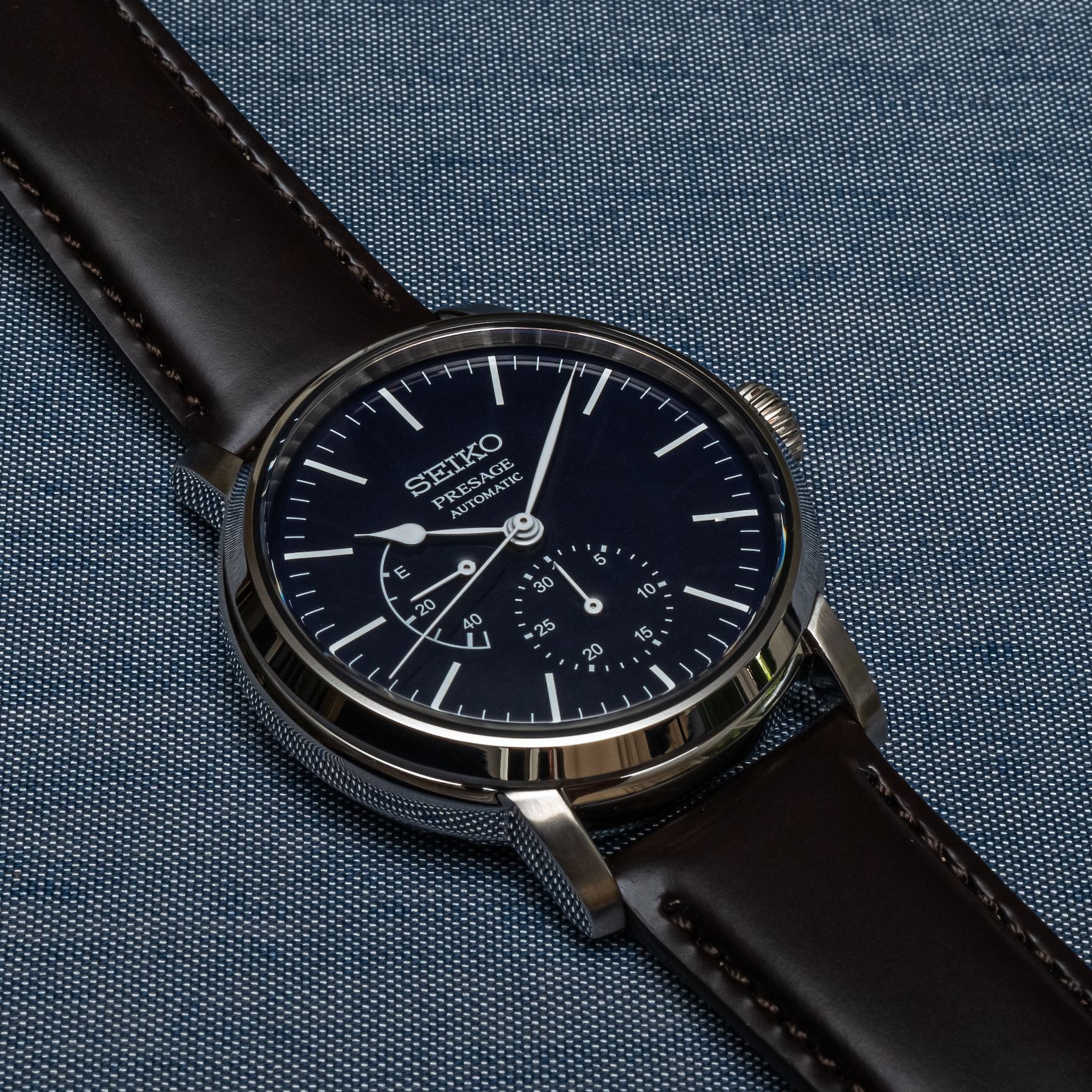 I have to say that I prefer the white dial SPB161 over the dark blue dial SPB163 by a considerable margin. This preference is largely due to how much clearer and observable the enamel work is when done in white, which results in a rich milky look that is obviously not visible in the blue. The framing of the subdials and inner ring is more visible on the blue dial, at least to me. Still, the white with those blue hands is classic Presage and is preferable. While on that topic, I am fairly certain that these hands are painted blue and not flamed.

Frankly, I had to delete the word “black” and replace it with “blue” in the above paragraph at one point just now. The watch is sitting in front of me and the dark blue was nearly indistinguishable from black at a passing glance. 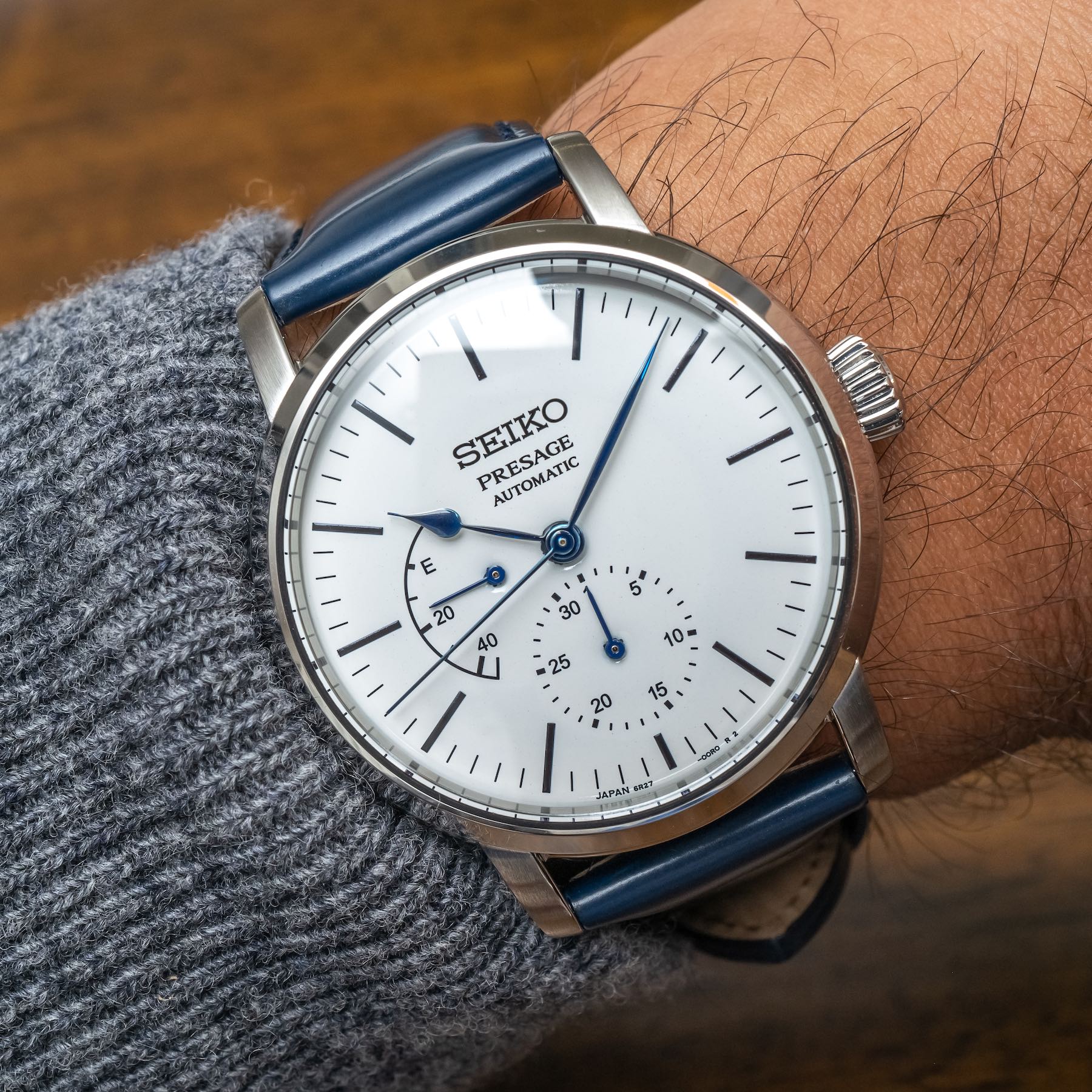 The steel case has an impressive 100M water resistance and measures 39.9mm-wide, 12.4mm-thick, and has a lug-to-lug measurement of 47.2mm. If you’d asked me a few years ago,  I would have said the case was a bit too small for me to pull off. My tastes have changed, and I now lean towards a bit smaller than I used to. I think these are sized perfectly and look great on a 7.5-inch wrist. The polished case is finished simply but is clearly done well, with really nice lugs that ultimately benefit from thoughtful sizing by having an exhibition caseback that proportionally works. Exhibition casebacks that are too small for their case are a huge peeve of mine and seem to be getting more and more common, unfortunately. 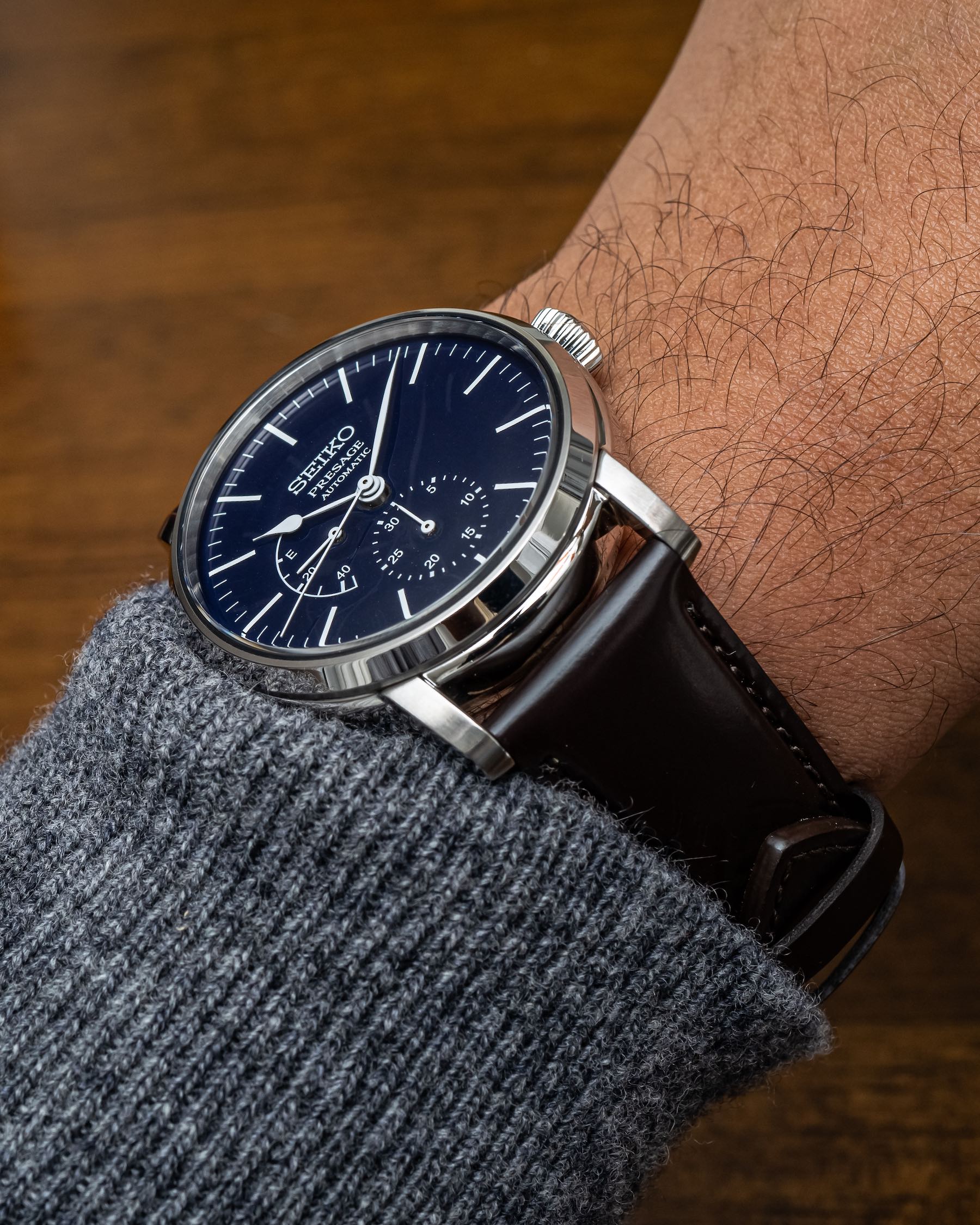 At 12.4mm-thick, the case could be a little bit thinner — 12mm and under is always ideal for me. Still, the SPB161 and SPB163 wear well on the wrist, but while I can’t imagine finding the thickness to be too big of an issue, it’s also the thing I would probably change first about the watch. Inside is the 6R27 automatic movement, which has a 45-hour power reserve and operates at 28,800 vph. (Please note that these watches didn’t have working movements.) 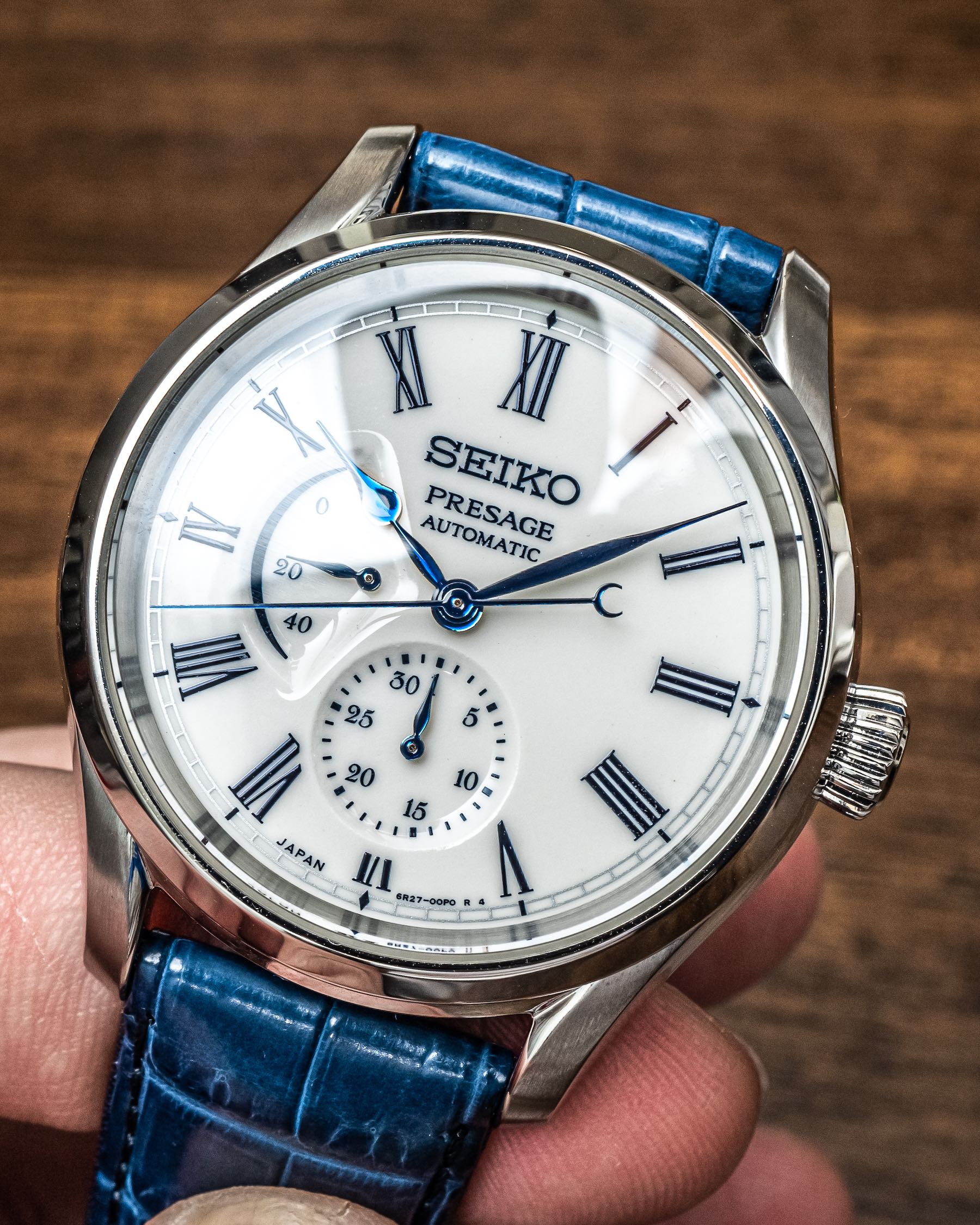 As for the Seiko Presage SPB171, this limited edition of 2,000 pieces retains the more traditional style with Roman numerals, crescent-tipped counter-balance on the seconds hand,  and railroad track minutes. The hour and minute hands are thicker, and the subdial hands take the laurel shape as well. 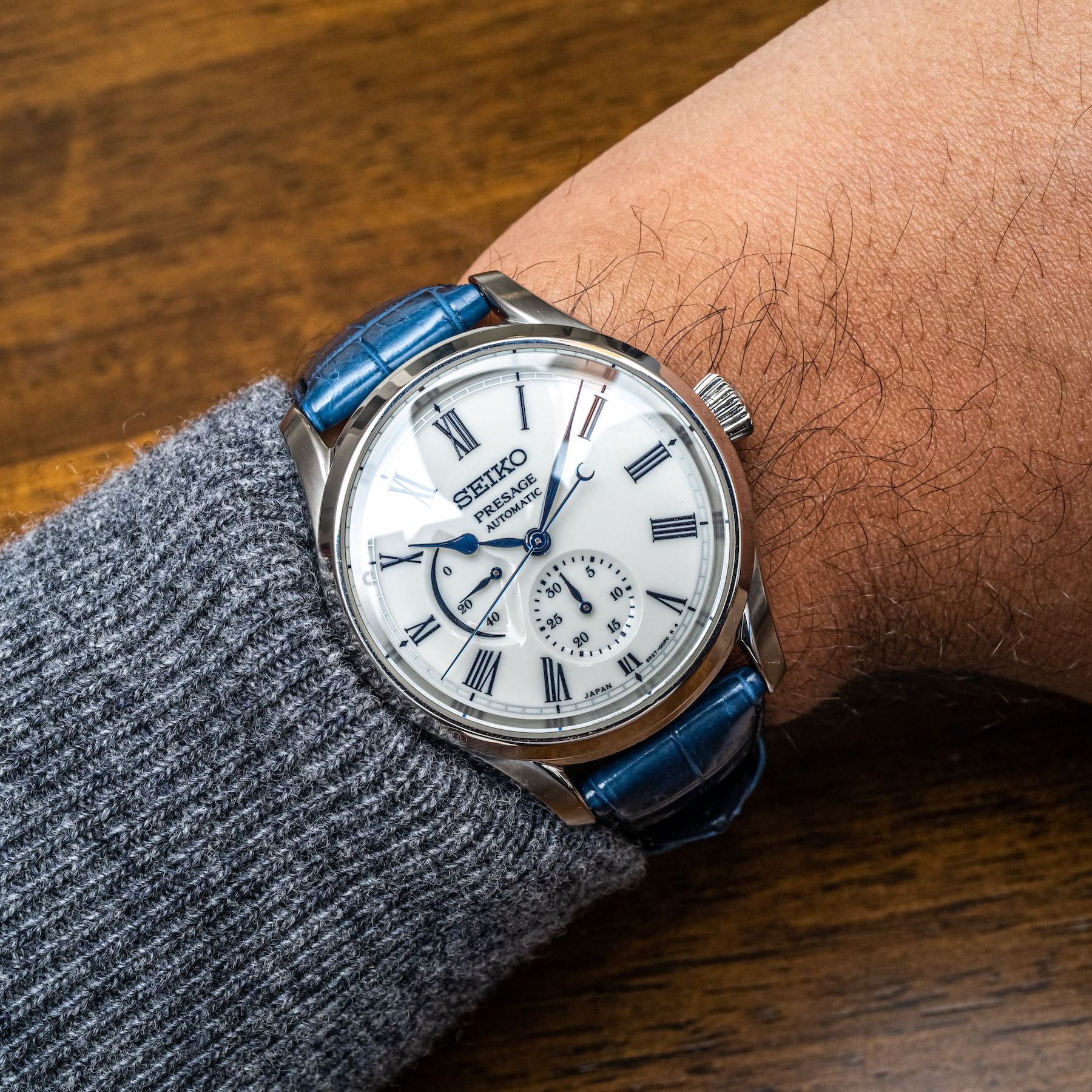 All this preamble aside, the Arita porcelain dial is what the SPB171 is all about. Rich and deep with blue accents, it’s not hard to understand why porcelain is a potent material when put in capable hands. For Seiko, Arita porcelain artisan Hiroyuki Hashiguchi has been overseeing the creation of these dials (more on Arita porcelain and Mr. Hashiguchi here). The pictures will say more than words can, frankly. And even then, porcelain dials need to be seen in person be fully appreciated. “Depth” and “richness” are, again, the two descriptors that work best to describe it, and the contrast against the blue hands, indices, and other dial aspects is absolutely stunning. 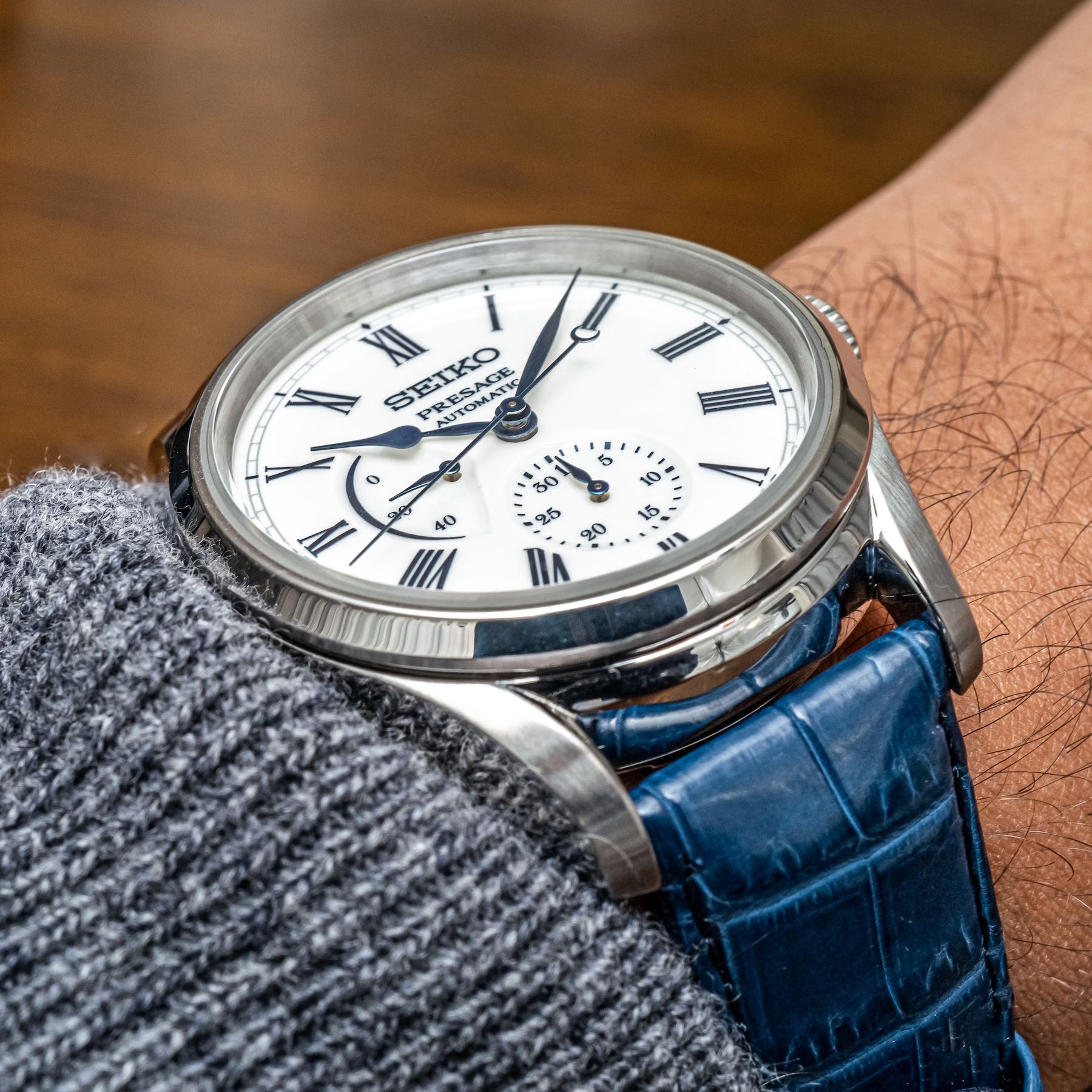 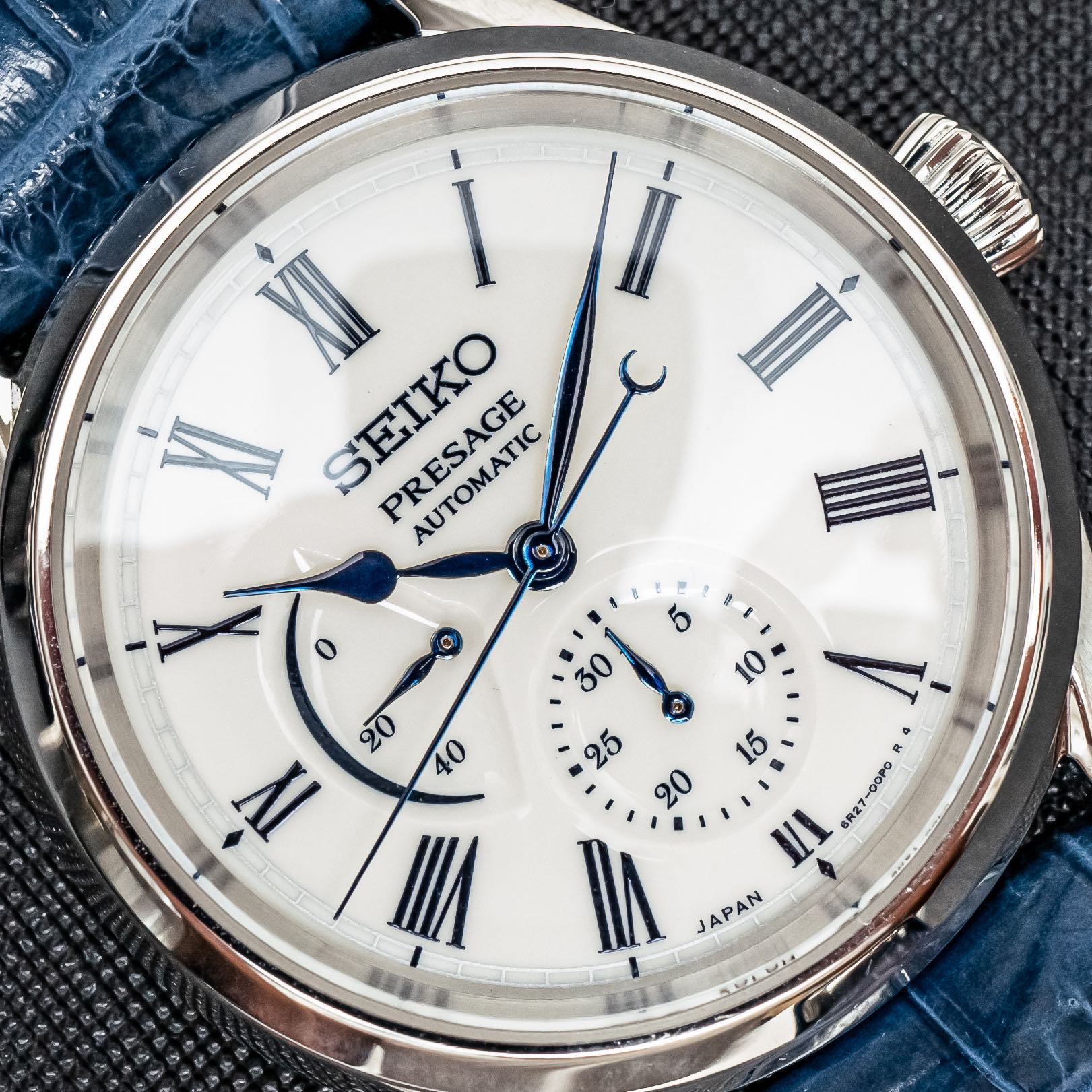 “Suigetsu” is evocative of viewing the moon reflected onto water, and it’s the theme that defines the SPB171. It’s a beautiful metaphor for the cool blue against the glossy surface of the white porcelain, a theme that’s carried on with the blue crocodile strap, which is actually a new color for Seiko. 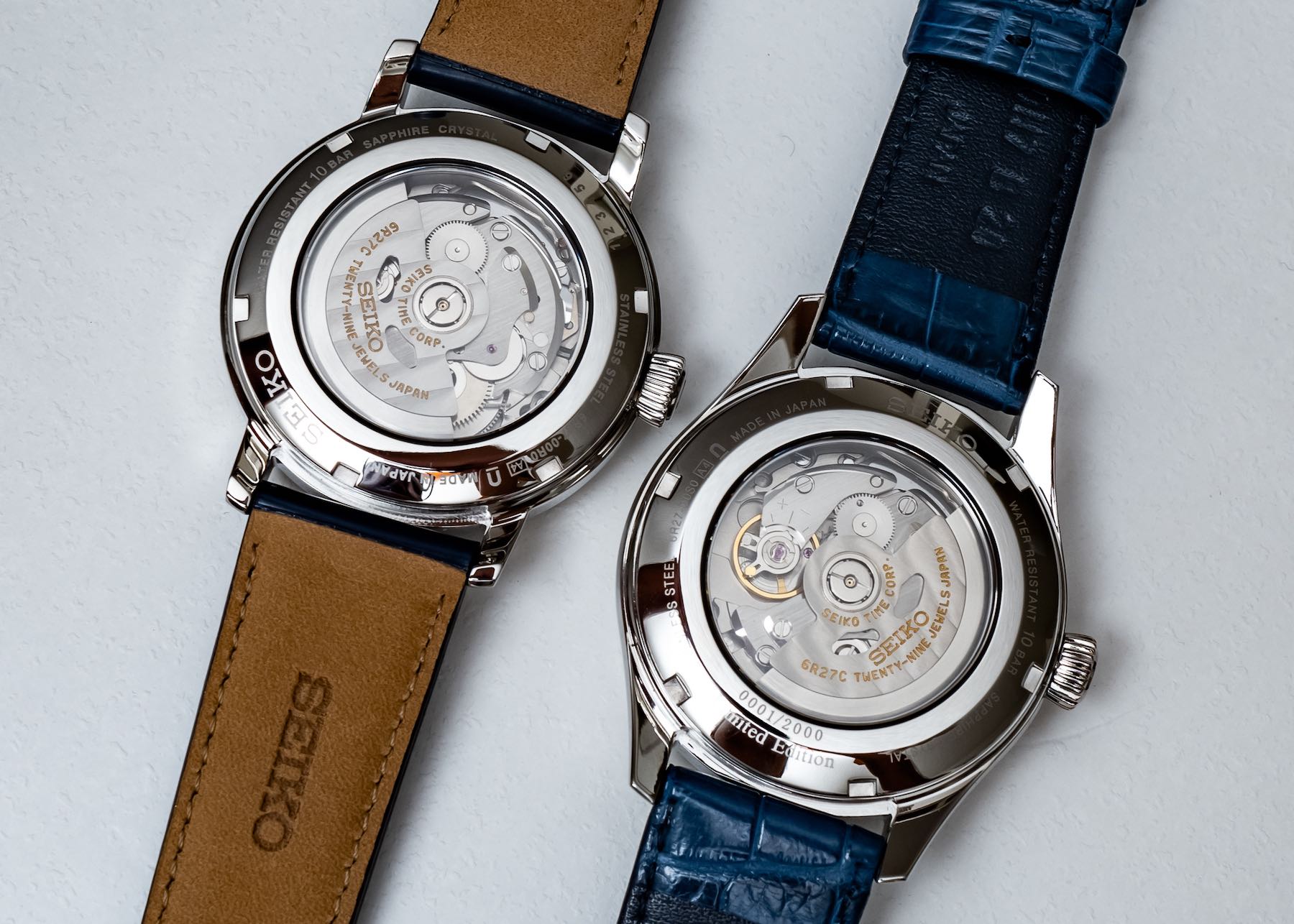 The 100M water resistant steel case is a little bit bigger than the enamel dial models, measuring 40.5mm-wide and 12.8mm-thick, with a lug-to-lug measurement of 47.8mm. Yes, the exhibition caseback is slightly smaller, proportionally. 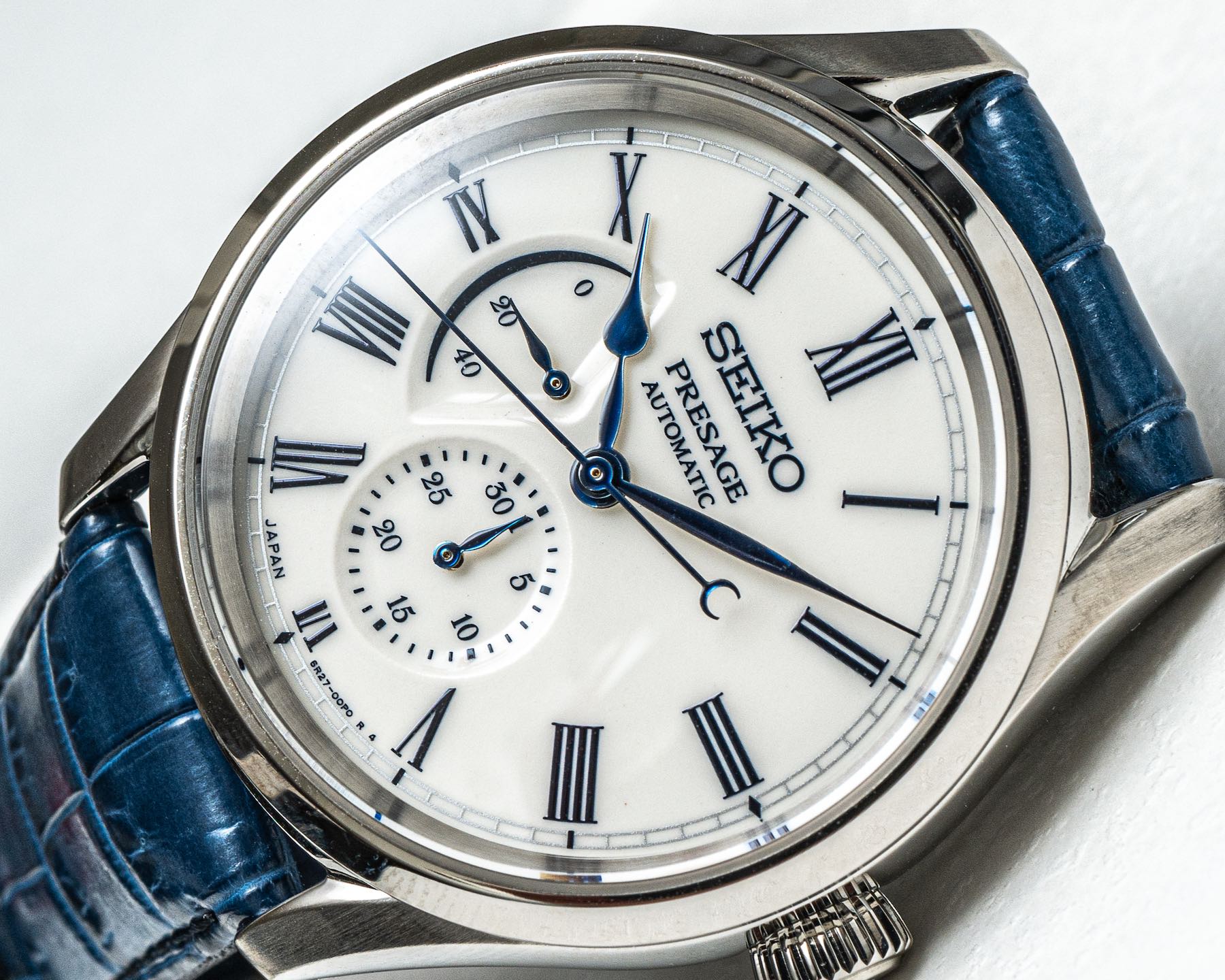 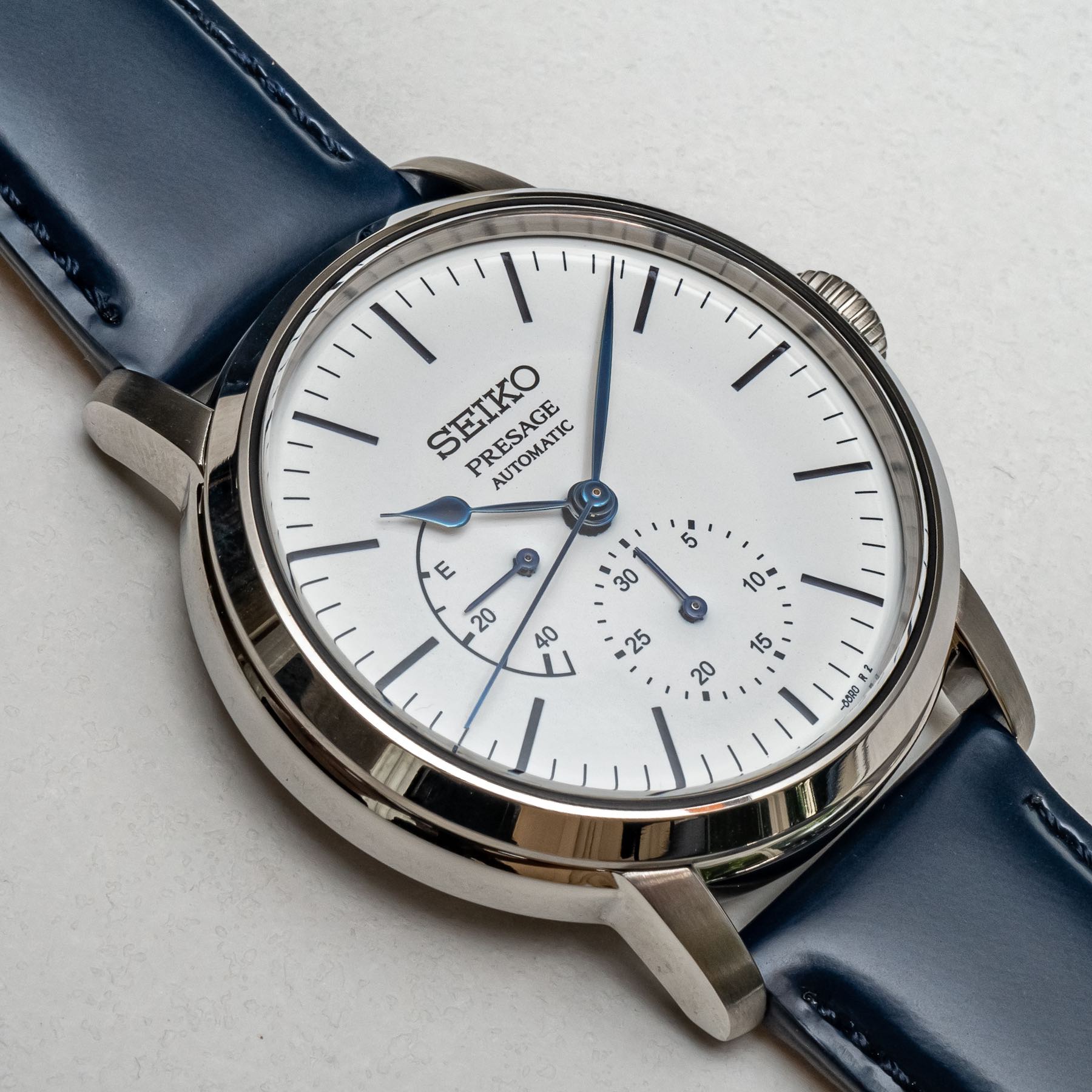 The Seiko Presage SPB161 in white dial enamel and SPB163 in blue dial enamel are some of the best dials you can get on a dress watch for a price of $1,300 USD. In fact, I can’t think of anyone in Switzerland or Germany that can make enamel dials of this quality for the price point. And even if there were a competitive set, Seiko’s Japanese design language is the other part of the equation that makes these pieces special. As for the Arita porcelain dial Presage SPB171, it is limited to 2,000 pieces and priced at $2,050 USD.

These are beautiful watches, and if you are interested by what you see in the photos, I would implore you to try to get your hands on them in person. You can learn more at seikoluxe.com.