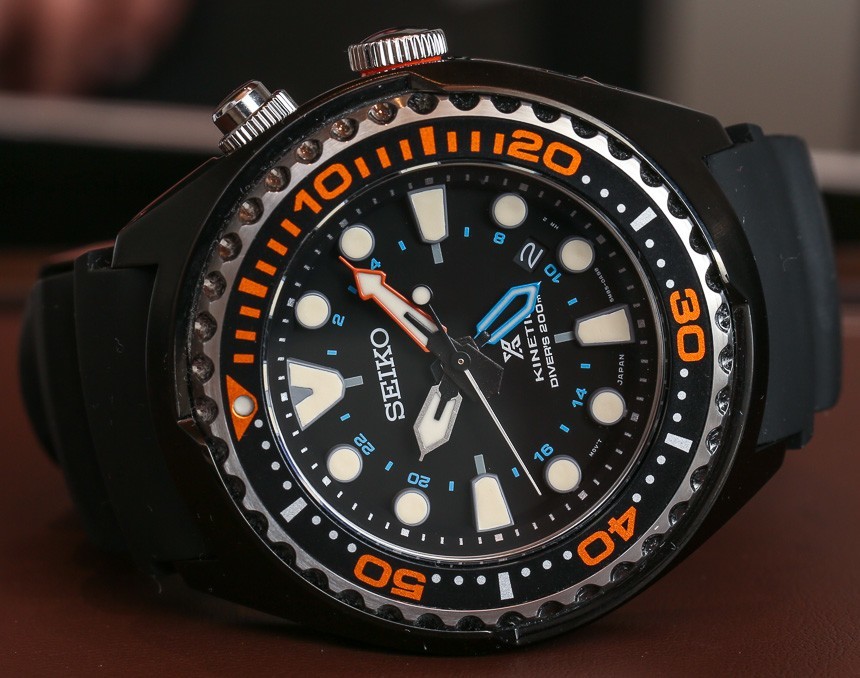 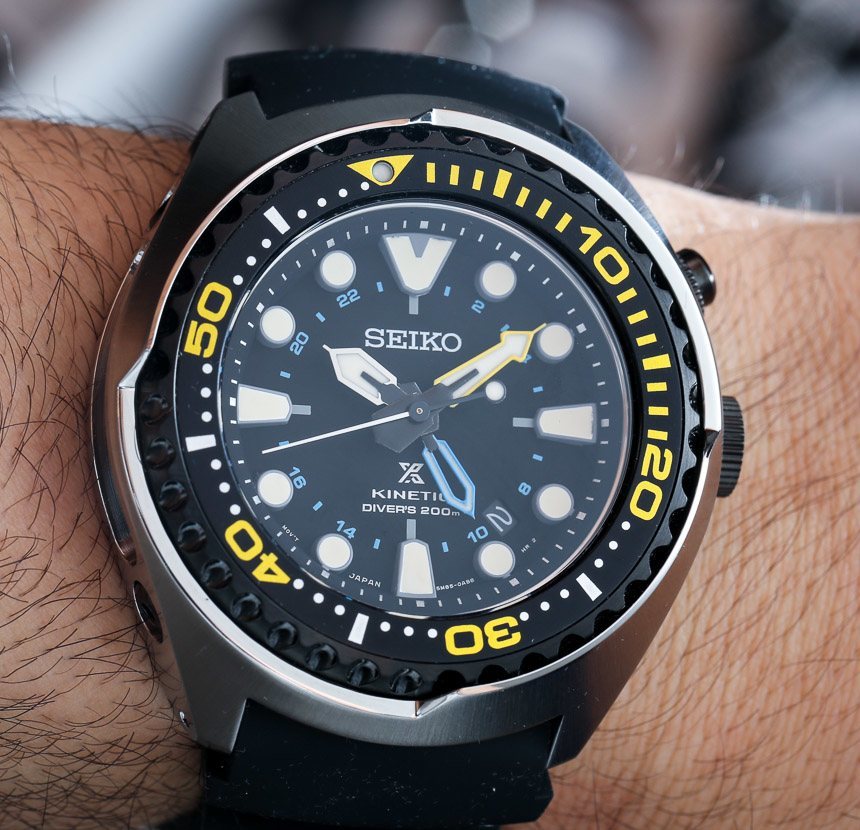 Seiko Prospex watches are among the best sport watches out there when you want a very good bang for your buck. Rare in the United States, but popular in places such as Japan, the Prospex collection is understandably becoming more popular each year. New for 2014 are the Seiko Prospex Kinetic GMT Diver’s 200m watches (references SUN019, SUN021, and SUN023) that will be available globally, and for a few hundred bucks, they are very hard to beat.

Rather amusingly (and not uncommon for Japanese brands) the official name of the watch is the Seiko Prospex Kinetic GMT Diver’s… It just ends there. Diver’s watch? Well “Diver’s watch” presumably, but it is amusing the the title ends with a possessive noun rather than indicating what this item is meant to be for a diver. Personally, I would have just called it the “Seiko Prospex Kinetic GMT 200m Diver,” but what do I know about the complex intricacies of watch nomenclature? 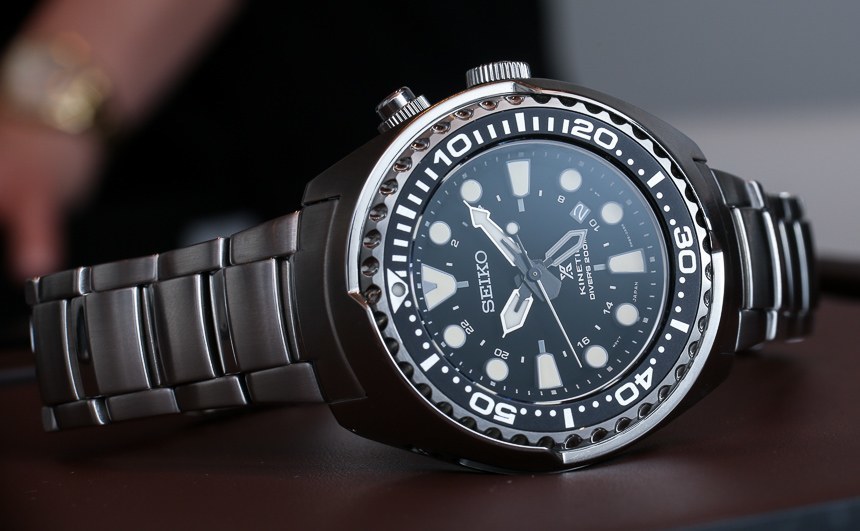 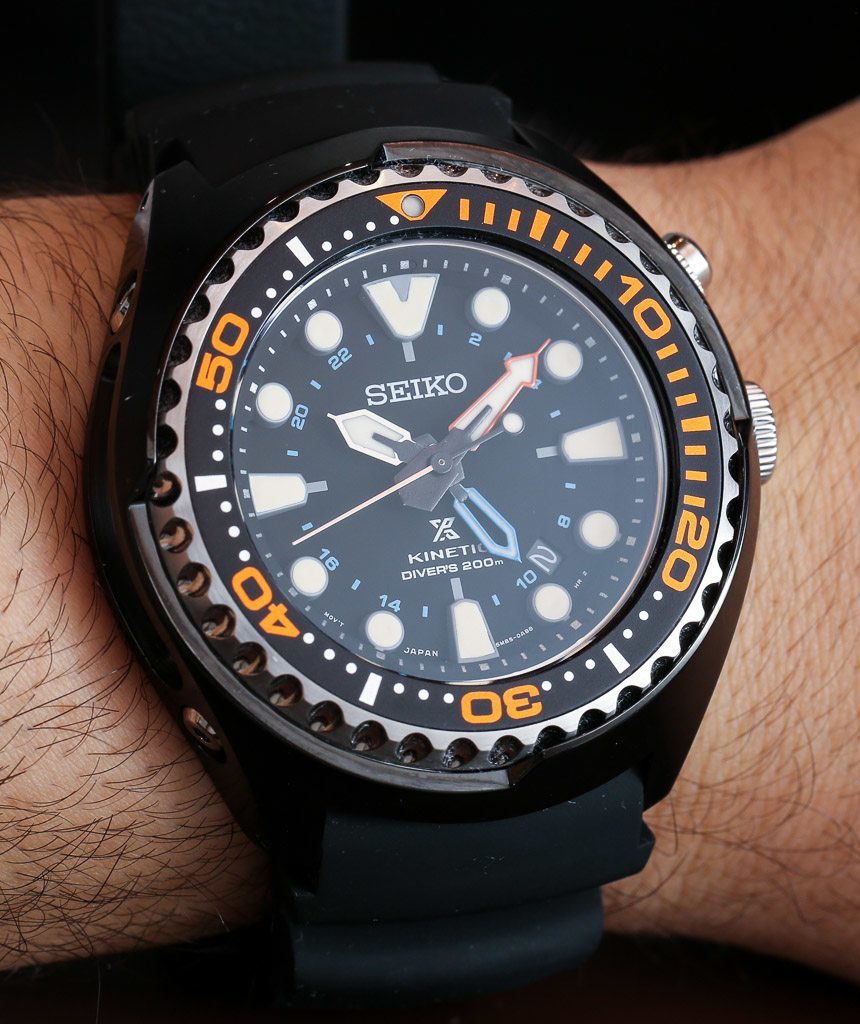 From a design perspective, we see a lot going on here. The Prospex Kinetic GMT Diver’s watch is clearly a Seiko, and draws inspiration from many of its famed dive watch designs. The case is very much in the style of the classic “Tuna,” and the dial melds a range Seiko dive watch designs from the last 40 years. As a GMT watch, the GMT hand in blue or white is clearly inspired by the amazing Seiko Spring Drive Spacewalk watch from about five years ago. Having said all that, the Prospex Kinetic GMT Diver’s watch has a personality all to its own, and is available in three versions for 2014.

The most notable detail about the Seiko Prospex Kinetic GMT Diver’s watch is the deep three-dimensionality of the dial. The raised hour markers do make it so that the hands cannot be as long as we might like, but legibility remains very high, and dial is very visually arresting. Each of the three Seiko Prospex Kinetic GMT Diver’s watch have slightly different dial colors, but each is interesting and enjoyable to read. In addition to the normal hands you’d expect on a dive watch, this timepiece is a GMT. Thus, there is a fourth hand on the dial used for second time zone which makes this not only a good sports watch, but a good travel sports watch. 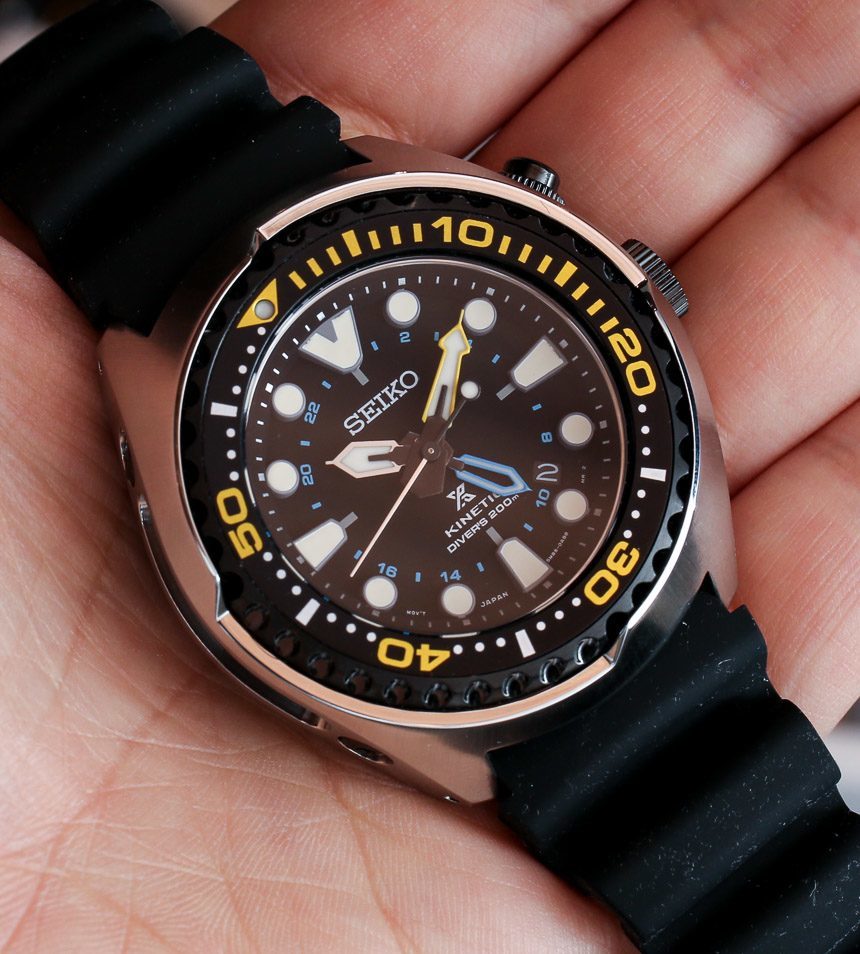 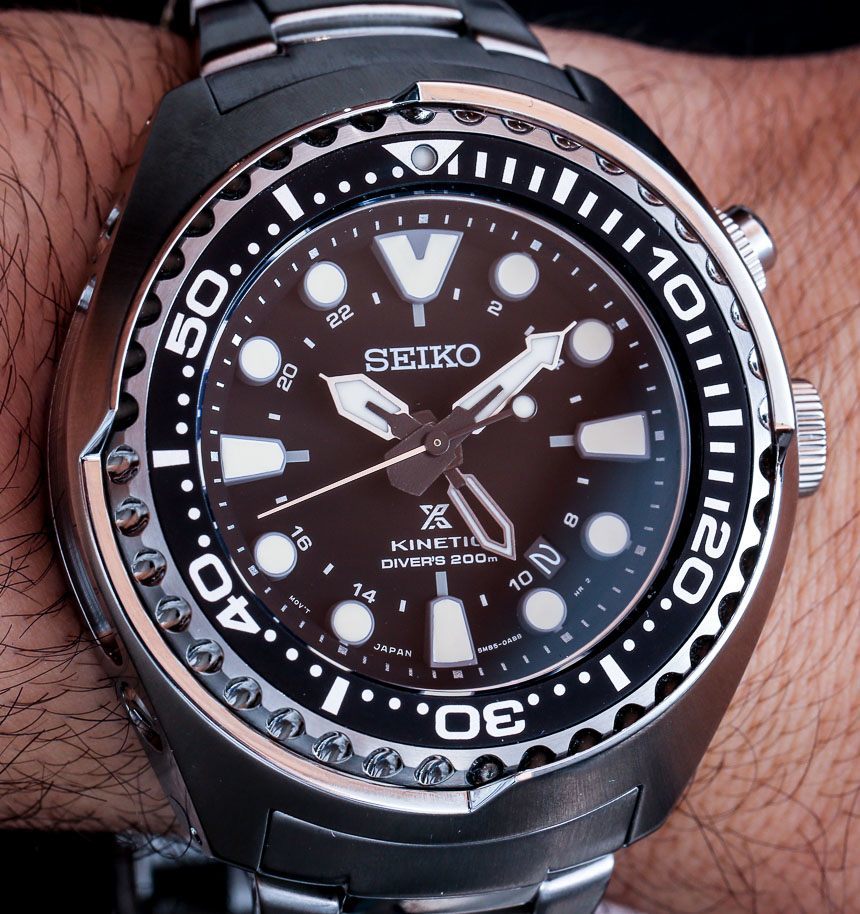 Perhaps the biggest complaint people will have about the Seiko Prospex Kinetic GMT Diver’s watch is the case size and thickness. In steel, the case is a full 47.5mm wide and rather high off the wrist. Again, that is part of the appeal, and it wears really nicely, but this is a larger watch for sure. This isn’t necessary from a technological standpoint, but is really about going along with the traditional large size of the Tuna-style Seiko diver watch cases.

The case is water resistant to 200 meters and has an AR-coated sapphire crystal over the dial. The rotating bezel can only be gripped on certain parts like the famous Tuna. The Prospex Kinetic GMT Diver’s watch is available with a brushed steel case, or one that is coated in IP black. Overall, case quality is pretty much what you would expect from a upper-mid-range Seiko diver, though it is uncommon to see a Seiko dive watch with a Kinetic movement that is this elaborate. 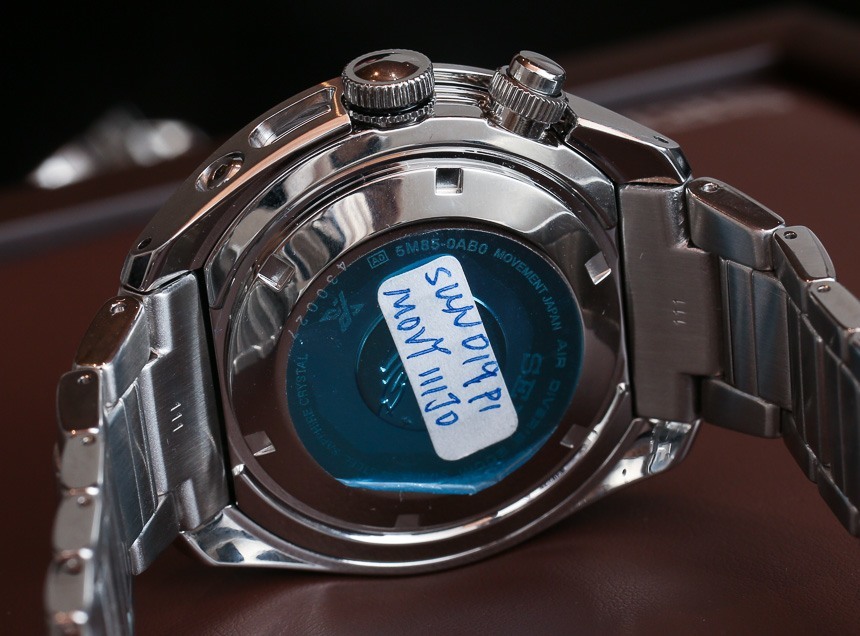 Looking around the sides of the case and you’ll notice even more interesting details, such as screws and exposed parts of the inner case. I’ve personally never seen this on a Prospex watch and find the overall design very modern and engaging. The Prospex Kinetic GMT Diver’s watch feels purposeful as a tool watch, but also interesting a modern sports watch with some welcome character.

As you can see Seiko will offer the Prospex Kinetic GMT Diver’s watch on either a steel bracelet or a polyurethane diver’s style strap. The watch looks good on both, and depending on the situation, you’ll want either the bracelet or strap. Since the bracelet doesn’t cost that much more it might be a good idea to get it, but then again, it is only available on the black and white SUN019 version of the watch. Those who opt for the more colorful Prospex Kinetic GMT Diver’s watch designs will get the black strap. 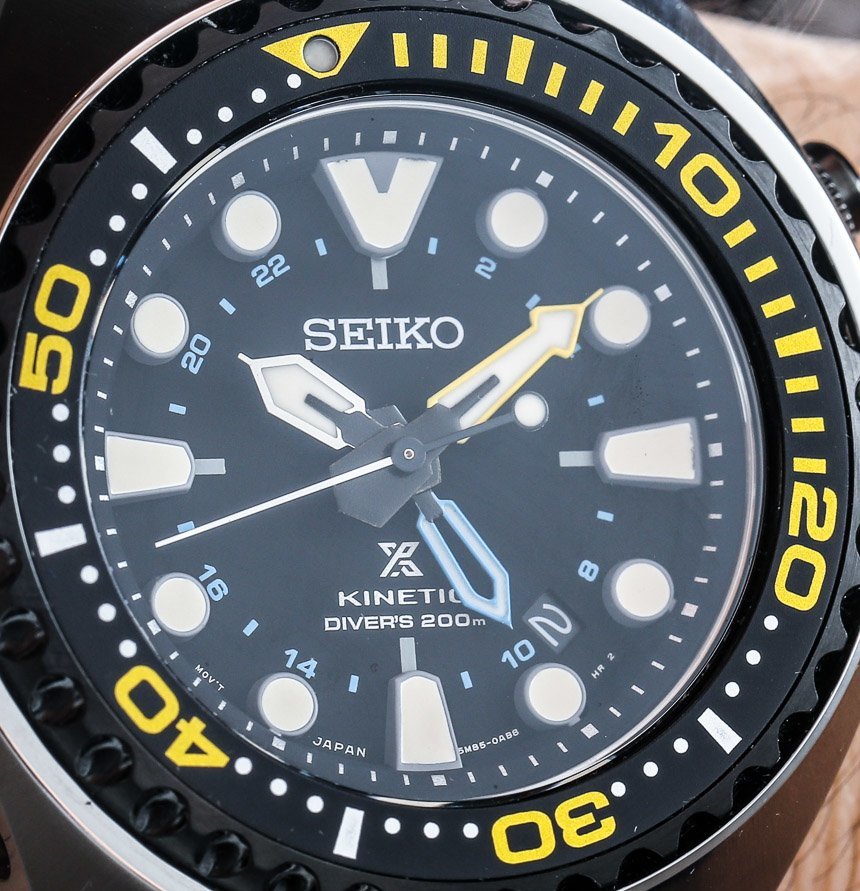