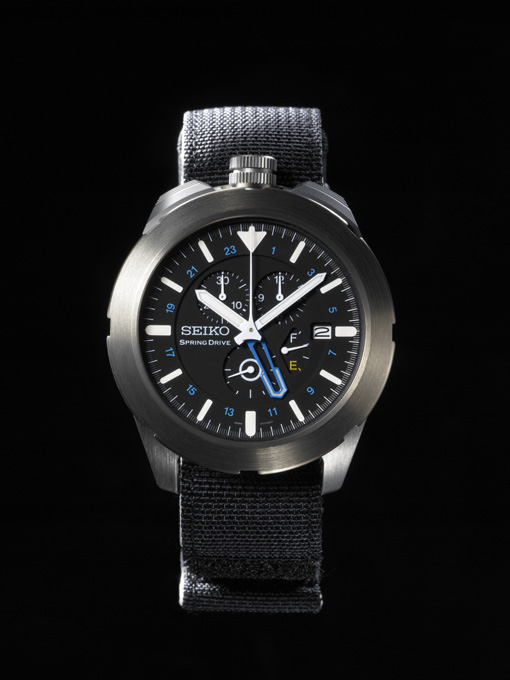 Those cheeky bastards over at Seiko, how they tease me. Long after the Seiko Spring Drive Spacewalk watch is announced to be sold publicly, they finally do so, and the price is a whopping $28,000. OK, so lets go back a second. While this article is being written before the Antiquroum auction on September 24th when the Seiko Spring Drive Spacewalk watch that Richard Garriot wore in space is being  sold-off – by the time you read this the auction will have occurred and we will know just how much the watch went for. I have no idea what the price will be, but I think it will be around what this new edition of the watch will cost retail. (UPDATE: price for the auctioned off was was $45,600).

I discussed the Seiko Spring Drive Spacewalk watch here. There you can learn about how much I love the watch and why. Seiko’s new mission for the watch is to make it clear how important “private space travel is.” Just hearing that makes me think gleefully of every sci-fi Anime cartoon I’ve ever seen (think Cowboy Bebop – good stuff). So thank you Seiko for mentioning (once again) on behalf of the Japanese, just how important it is that we focus on space. Sure the politicians complain that we need available fiscal resources for stuff here on Earth. I just say… think of asteroid mining. Ridiculous amounts of resources on what are essentially infinite rocks in space. Mine them to our hearts content and there is absolutely no negative environmental impact on our home planet. Am I going off on a tangent? Yea, maybe I am but you get the point! And so does Seiko.

I can’t even recall now how long ago it was that I first learned of the Spring Drive Space walk watch – 2008, 2007? It was originally meant to be in some limited edition that was at least more than the 6 that were made. Now, for whatever reason, Seiko will produce that larger volume of these coveted timepieces. Seiko says that they are making it because Richard Garriot urged them to. I have respect for the guy, but anyone who blows their fortune on traveling to space one time isn’t exactly the type of business man I want to be taking advice from. More of an emotional acting person right? I think it has to do with the larger success of the Omega Speedmaster Moonwatch, and the fact that there has been so much public interest over the watch being auctioned by Antiquorum. If you look at the images I inserted into this article you can bolster your knowledge of the watch.

Seiko has not yet announced how many of the Seiko Spring Drive Spacewalk Commemorative Edition watches there will be. Maybe a limited edition, maybe not. Hard to say. The watches are due in 2010, at least to start. Given the fact that they have already actually been designed and perfected, I hope there aren’t delays. Changes from the original 6 watches? Just a few that I know of. First they will have special branding on the back of course and have serial numbers. The crown of the watch will also be screwed in. Originally Seiko was worried that a screw in crown would be hard to wind in space (the automatic rotor is worthless in a zero gravity environment). After the missions in space though, the watches was found to be a breeze to use, so the new Commemorative Edition models of the Spacewalk watch will have screw-down (top-mounted) crowns. This ought to help with increased water resistance as well.

I love this watch, I want this watch, I can’t even begin to afford this watch. Better start saving up for next year! If you can get one, do so and tease me with wrist shots.