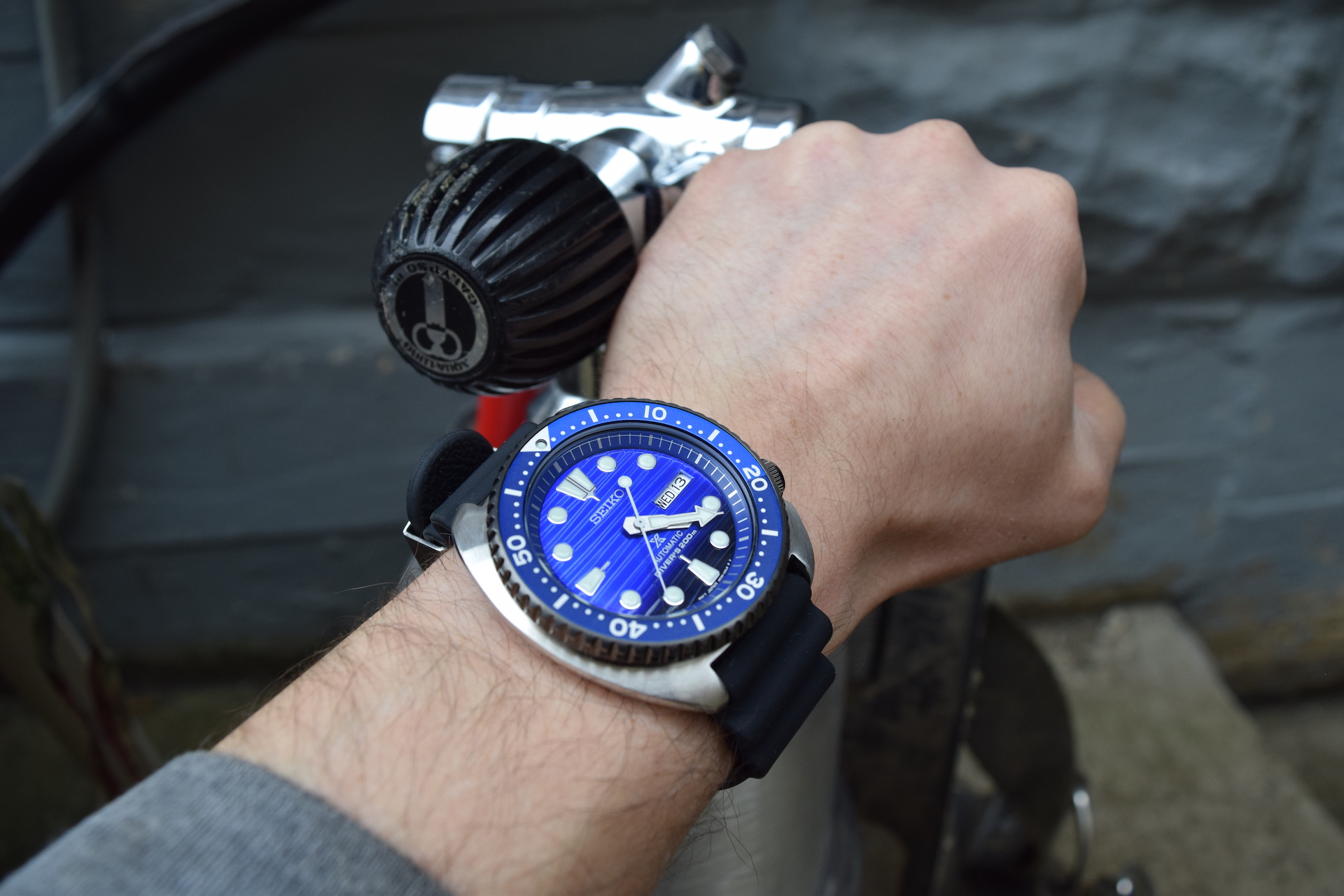 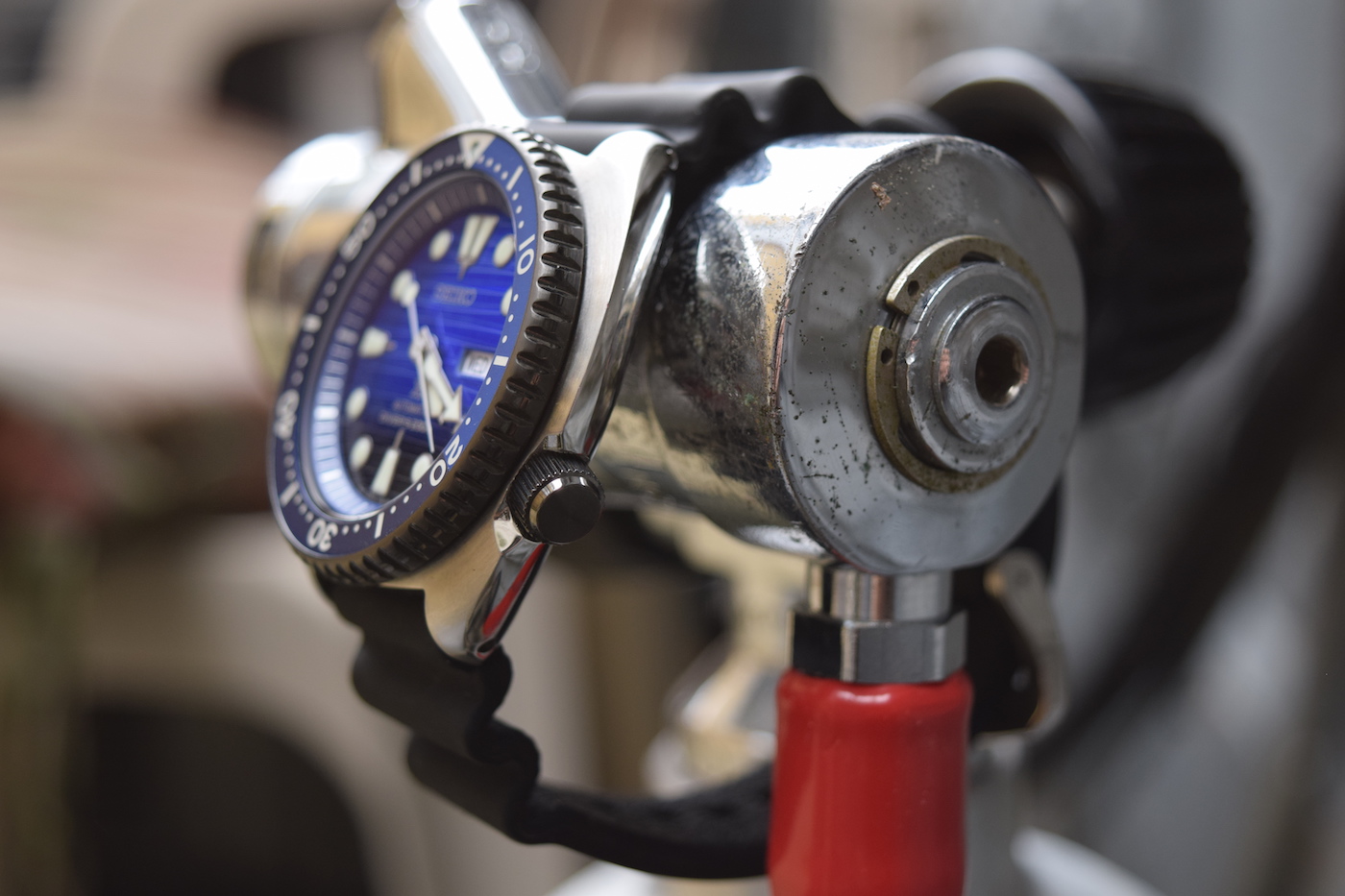 Though theoretically around 44mm in width, the Turtle case actually wears a bit smaller width-wise, and doesn’t look at all out of place or terribly large even on my 6.25” wrist. Generally speaking, the case finishing on the Turtle is well done for the price-point, with a circular brushed top and polished sides separated by a fairly sharp bevel. Of course, given the large case and brightly colored dial, this is a noticeable watch, even at a distance. This watch gets noticed even by non-watch types, so as I mentioned, be prepared for that.

Part of me selfishly wishes the new Turtles more closely shared the original size of the 6309 design, which I very subjectively consider near-perfect. However, Seiko already produces an excellent 42mm watch in the SKX series (among others), and likely wanted to make something for those interested in Seiko’s classic diver looks and near-entry-level price-point in a larger package. It hurts, but I get it. 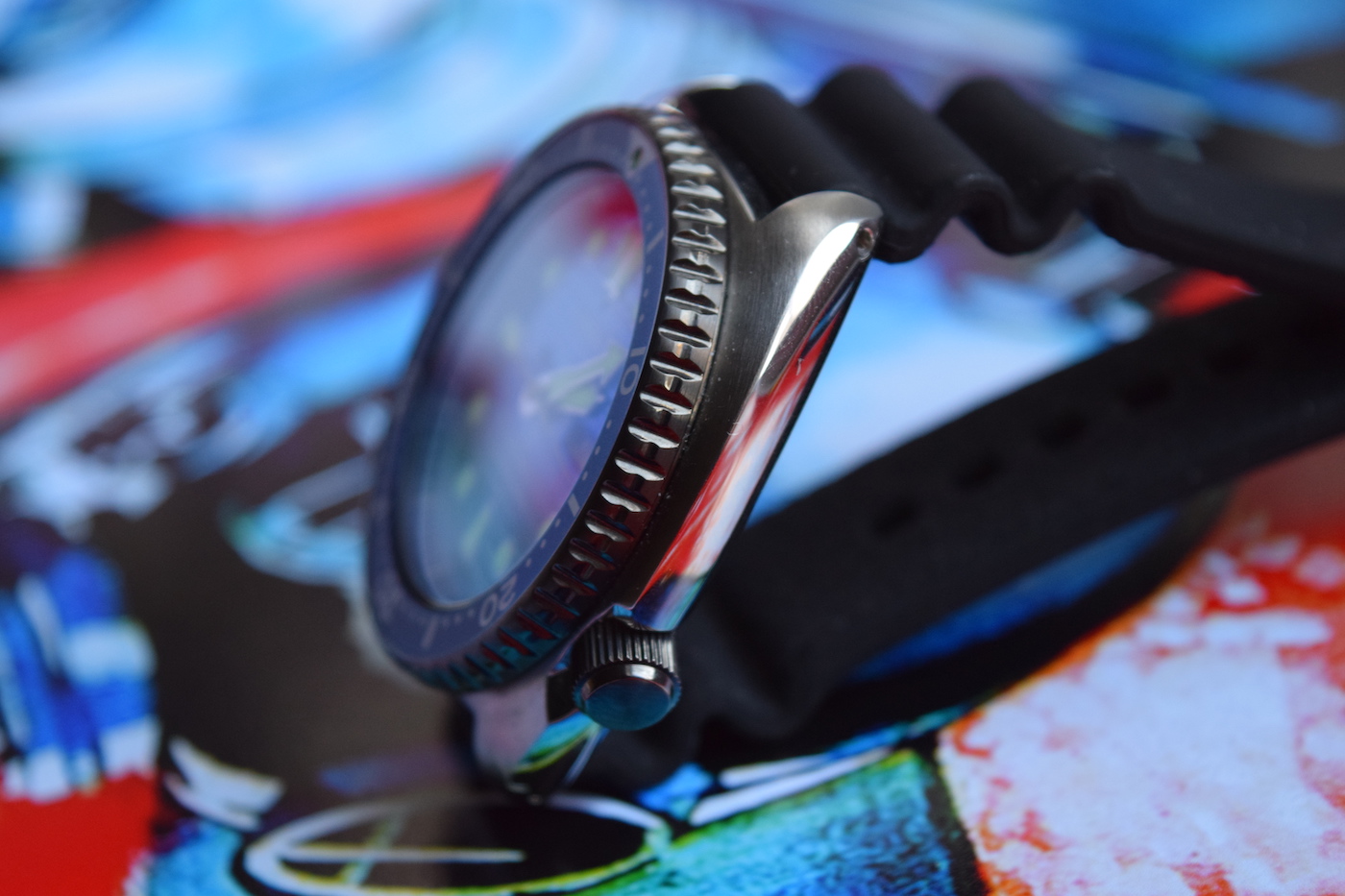 Matching the PVD bezel is a large PVD screw-down crown located at Seiko’s traditional 4 o’clock position. The action on the Turtle crown is excellent and on par with watches costing a heck of a lot more. It’s leagues better than what you have on an SKX crown. It screws down with many turns and feels very positive in setting and winding. It’s really well done.

While a PVD-coated bezel and crown are somewhat small additions, they do make the Save the Ocean Turtle a little bit more special and different from its stock relatives. Sealing the 14mm-thick case is a standard Turtle caseback, engraved, of course, with the beloved Seiko wave motif. While a small thing, the caseback features brushing and polishing, as well as engraving, which is all a step above the work on the more simply appointed SKX. One of the best features of the Turtle case is drilled lugs, something every tool watch should absolutely have. 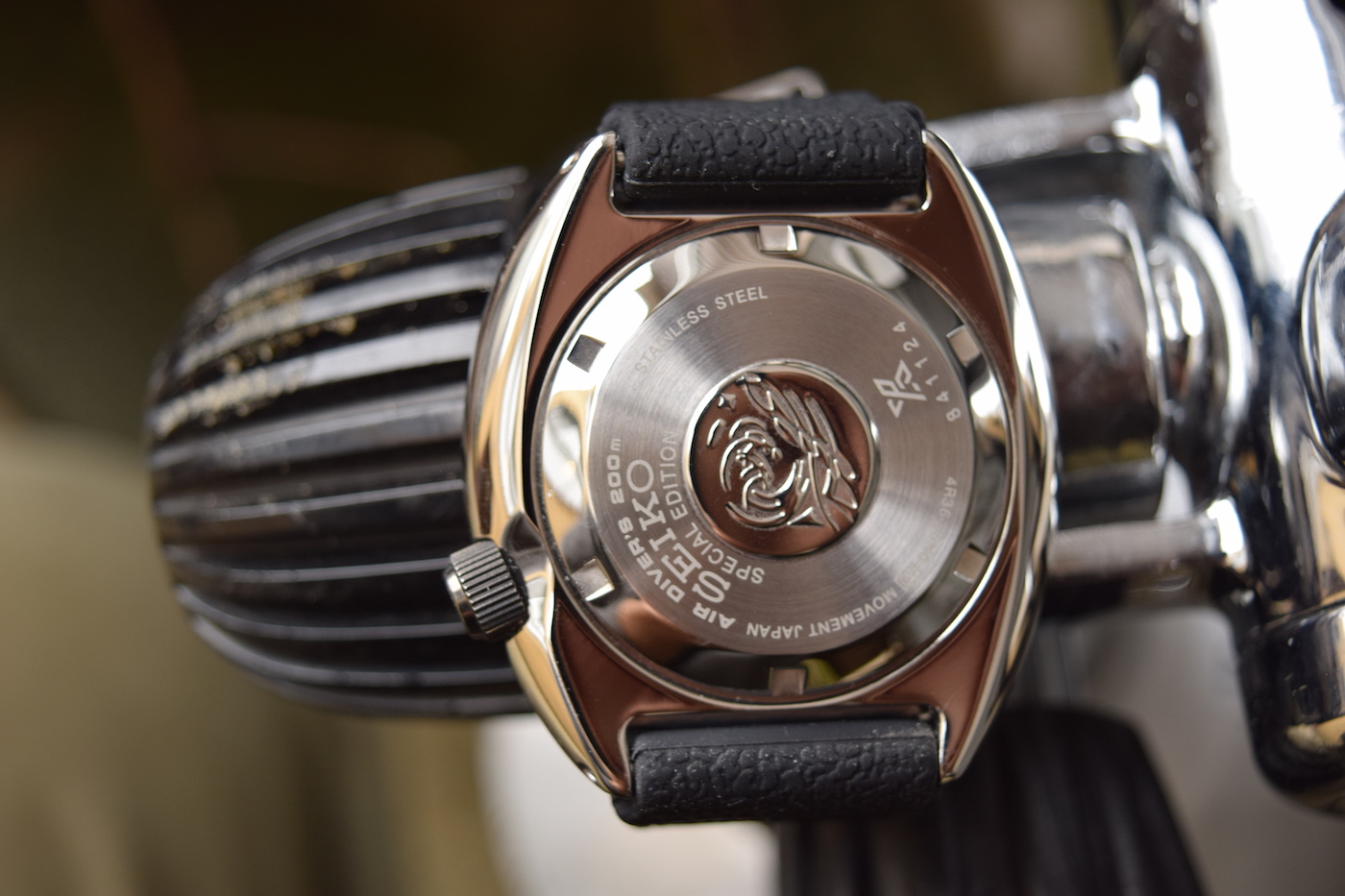 SEIKO SRPC91K1 SAVE THE OCEAN MOVEMENT/STRAP

Under the Seiko wave beats the utilitarian but solid 4R36 caliber, a totally Seiko-built 25-jewel, 41-hour-reserve movement, which beats at a somewhat slower 21,600 bph. For its purpose, the movement does its job well, and my watch kept time at a very reasonable +6 seconds per day on the wrist. These are also calibers designed with durability in mind, and I’d wager the 4R36 will provide years of trustworthy performance and should be easily serviced, should the need arise. There are scores of never-serviced old Seiko divers kicking around the scuba diving world, still ticking away. For those who are worried about such earth-shattering matters, the seconds hand sweeps somewhat less smoothly than more refined movements from Rolex or Omega, but it makes sense given the slower rate of the Turtle’s caliber and, really, who actually cares? 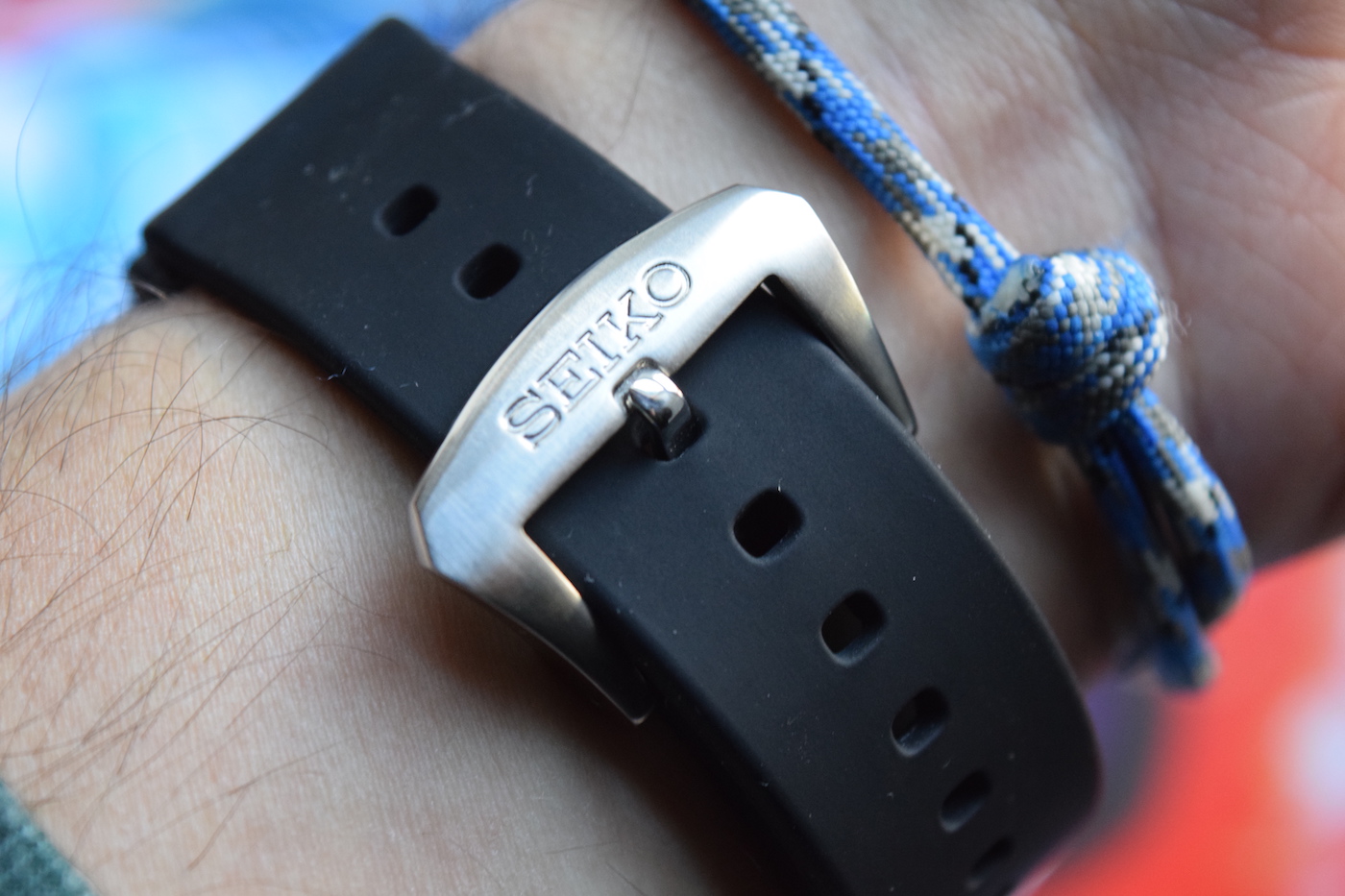 Keeping the charitable Turtle in place on the wrist or over the wetsuit is a well-made silicone strap with a signed, stainless steel keeper and an oversized signed buckle. As an actual diver, I spend a lot of time thinking about straps. Seiko divers have traditionally employed stiff polyurethane straps of somewhat extreme length intended to fit over various diving exposure suits. They work in practice but are ungainly long for many wrists in casual use. They’re also not terribly comfortable. In fact, many a Seiko strap has been boiled in order to give it a more wrist-like shape and some flexibility. Recently, Seiko has made the switch to silicone, and while I understand where they’re coming from, I frankly don’t agree with it. 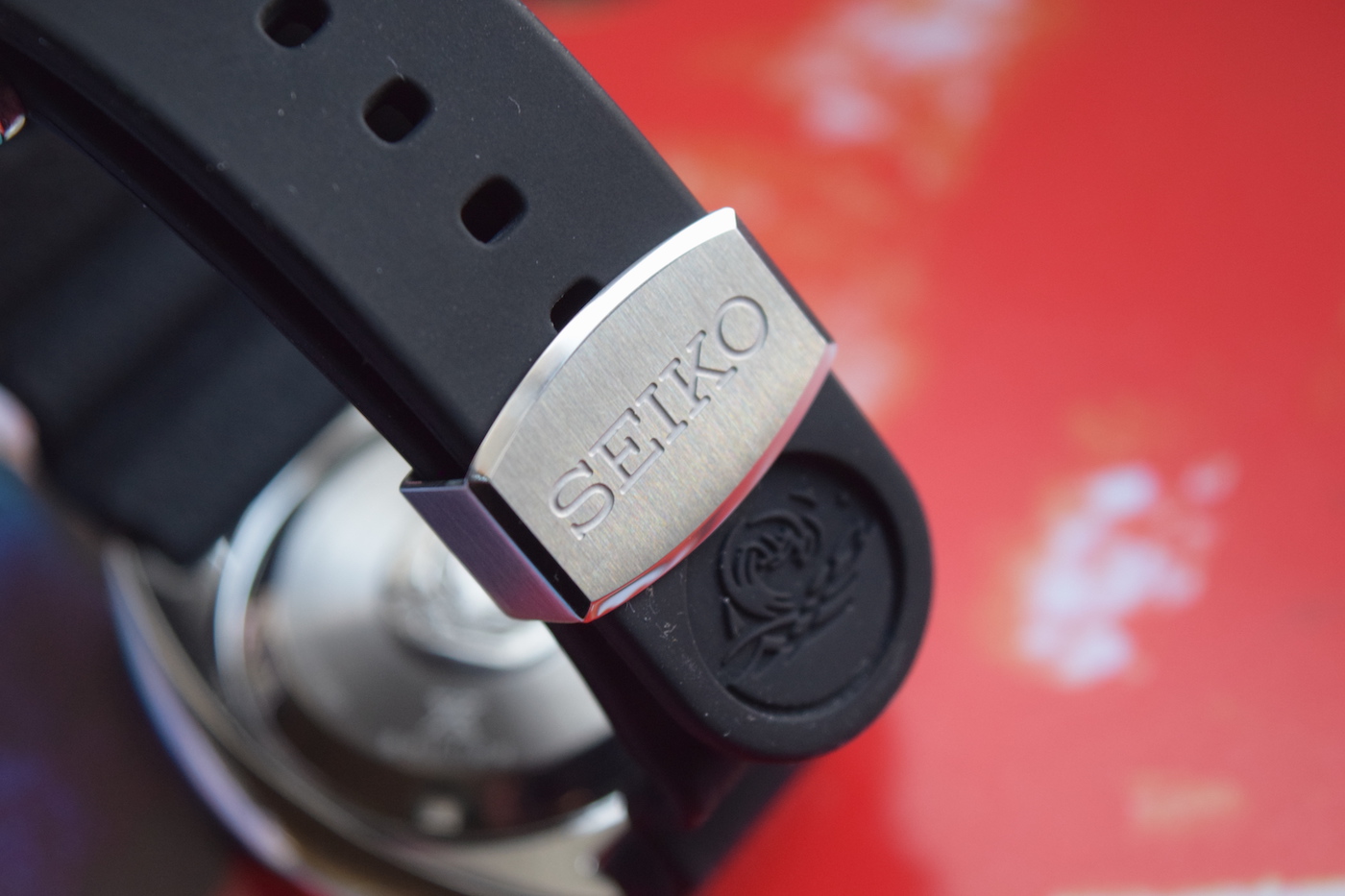 While silicone is pliable, durable, comfortable to wear, and easy to produce in a myriad of colors, I find it a bit flimsy, especially on a heavier, larger watch like the Turtle. Further, it’s somewhat slippery, with its tail always trying to escape its keeper to flail wildly about my wrist. Finally, as many know, silicone is a dust magnet and virtually never looks pure black or clean unless you’ve just rinsed it off. While I’m sure silicone scores highly in tensile strength and resistance to seawater (I’m confident Seiko has done all its research; that’s how they roll), I’d prefer Seiko followed the Swiss in this one instance and made their diver’s straps in natural rubber, a better-looking and more comfortable material, as far as I am concerned. An Isofrane would be about perfect for this Turtle, in particular, but I digress.

Still, though silicone, I like the Turtle strap. It’s long, but it doesn’t have a ridiculous tail, even on my small wrist. It’s also very comfortable if you can ignore the dust. Seiko produces an excellent solid-link bracelet for the Turtle series, which can be easily and fairly cheaply sourced for those looking for a bracelet option. If I were actually going to take the watch diving, I’d switch out the rubber for a nato or a zulu strap, but that’s just me. 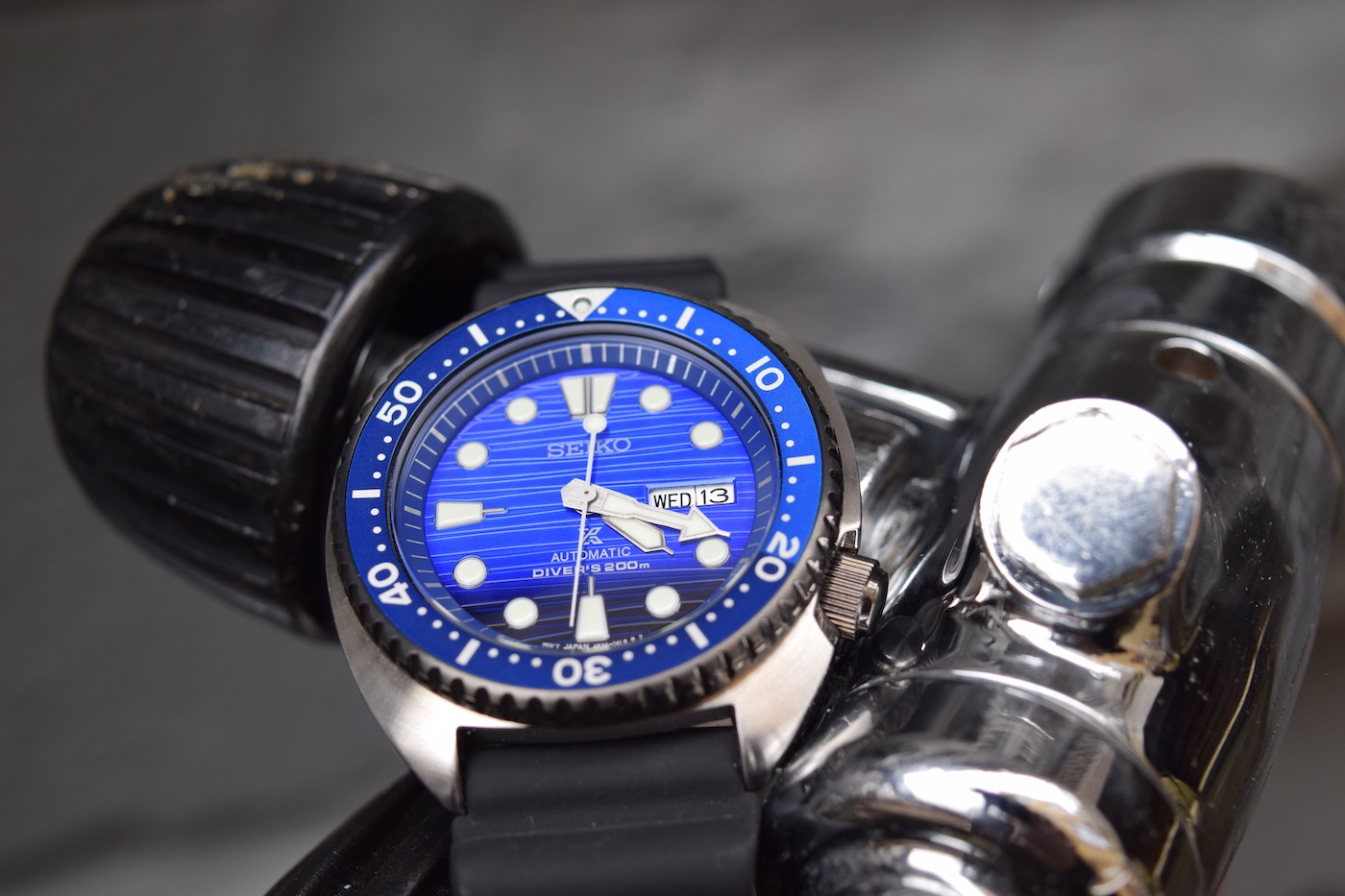 Seiko’s Save the Ocean Turtle is, in some ways, simply another color variant of the ever-expanding SRP series, once again proving the popularity of vintage-inspired pieces in today’s watch world. However, the maritime charity angle and carefully selected changes from the standard version add up to create a watch that can stand alone as an interesting piece in its own right. It does look markedly different from the standard versions. The altruistic value of a watch with charitable implications, especially concerning the ocean, also adds value and interest in a diver’s watch, which also just plain looks cool. The SRPC91K1 is not subtle. It’s even a little bit wild by Seiko standards, but the Japanese watch powerhouse’s recent penchant for special-edition versions of its core models is good news for all of us and, while a charitably intended watch won’t save the embattled world oceans, the Save the Ocean Turtle is at least a reasonably priced (at $495) and very fun step in the right direction for the ocean-going watch enthusiast. Learn more at seikousa.com.

Necessary Data
>Brand: Seiko
>Model: SRPC91
>Price: $495 USD
>Size: 45mm-wide, 14mm-thick, 48mm lug-to-lug
>When reviewer would personally wear it: Yes, even more than I thought I would.
>Friend we’d recommend it to first: The charity-minded ocean lover.
>Best characteristic of watch: The striking blue color-fade dial.
>Worst characteristic of watch: I just can’t get down with silicone straps.