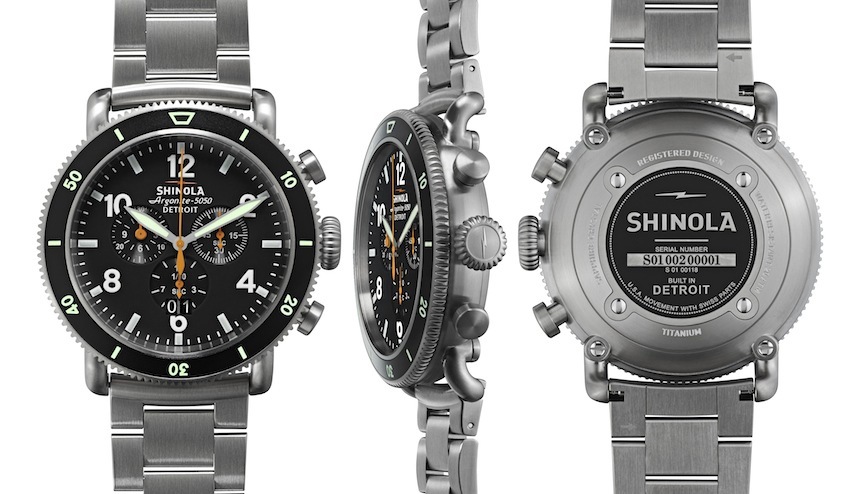 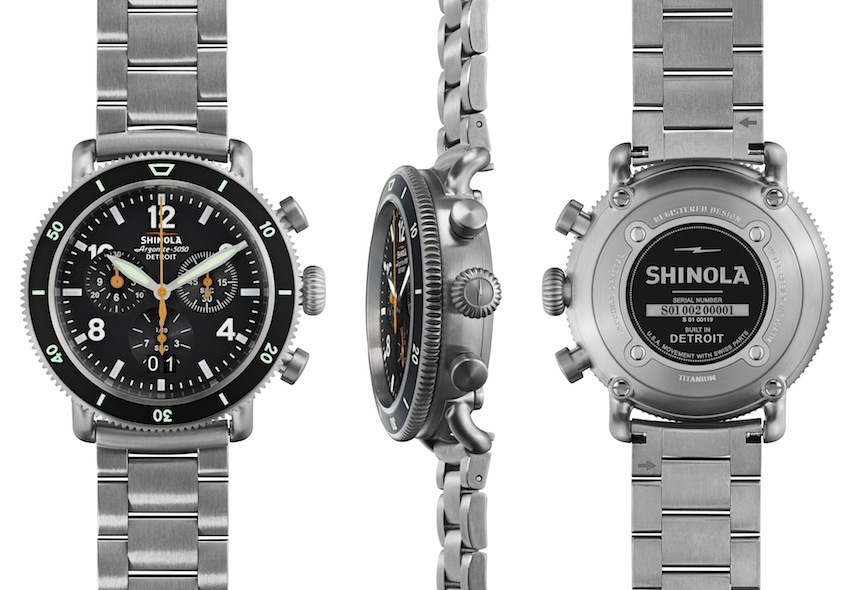 For 2014, US-based Shinola in Detroit will release their first titanium watch with the Shinola Black Blizzard Chronograph. The Shinola Black Blizzard will come in two case sizes and is very much part of their 2014 theme, which seems to be all about the rotating diver’s style bezel. Buzz around Shinola is still high and their products genuinely look attractive; the question for me is whether or not their pricing is starting to get a bit more ambitious than the market can withstand in the long run.

Shinola is very much about celebrating the USA. As you know, Shinola is a former shoe polish factory (shine-ola) and a few years ago was revived within Detroit to produce watches, bicycles, leather goods, and other items in the USA. In regard to the watches, they are produced using quartz movement kits from Ronda in Switzerland, while the other components for the watches are mostly from Asia. The manufacture location in Detroit assembles the watches and give the products that good ol’ feeling of real Americana. 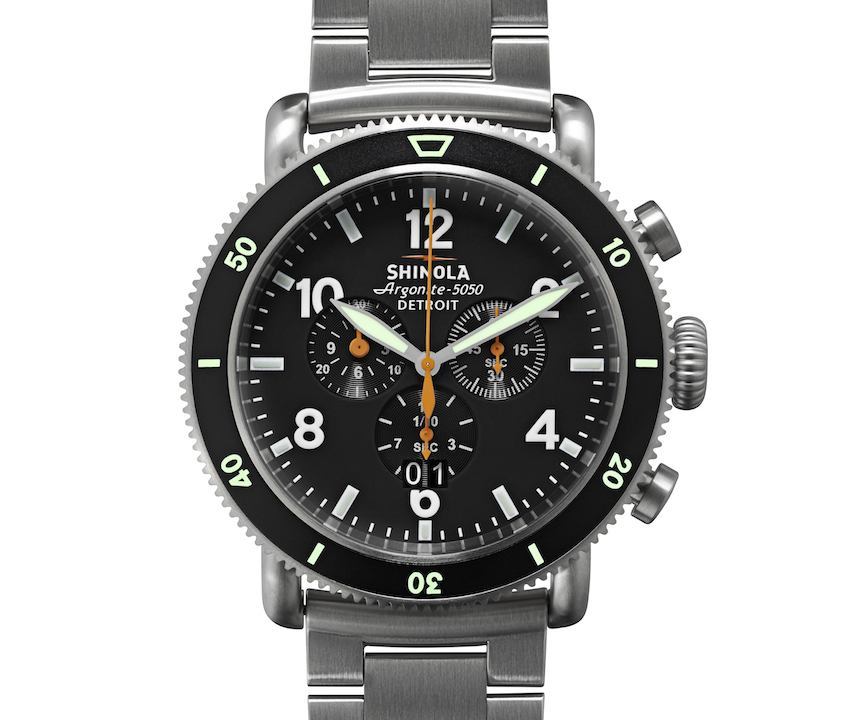 The Shinola Black Blizzard watch is named for the rather terrible dust storms that hit places such as Oklahoma in the 1930s during the Dust Bowl. Shinola claims that the name is meant to allude to American perseverance, but it is a bit odd for the watch to be named after one of the really tough parts of that era for the people who mostly starved and moved West. Now it is time for us all go watch The Grapes of Wrath – or read it, if you have the time.

Interestingly enough, each Shinola Black Blizzard watch is said to come with a “leather-bound coffee table book” about the Dust Bowl and the dust storms that inspired the watch. Shinola builds on their current Runwell Chrono watches with the Shinola Black Blizzard. The case is similar but the new bezel offers a fresh look. The cases have 200 meters of water resistance which isn’t too bad either, and over the dials are sapphire crystals. 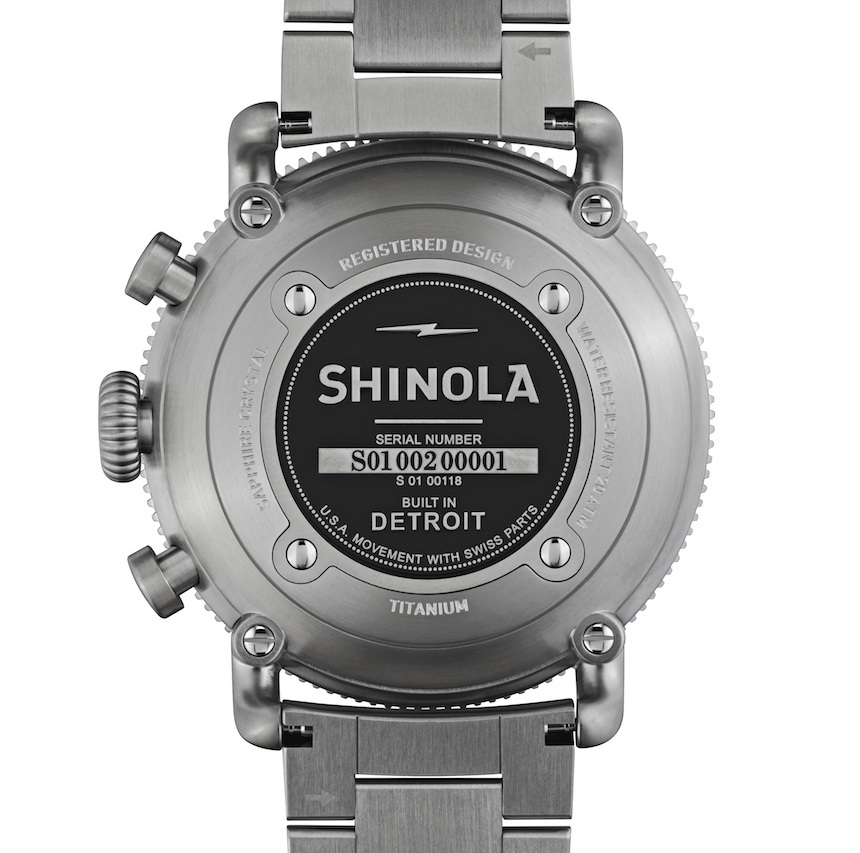 With a titanium case, the Shinola Black Blizzard is bound to be lighter than similarly sized steel watches from the brand. The overall design is pleasant, with hints of vintage appeal and enough legibility to make most people happy. Inside the Shinola Black Blizzard watch is the brand’s so-called Argonite 5050 quartz chronograph movement. It has a 1/10th of a second chronograph and a big date indicator. If you are into quartz watches, then this isn’t a bad movement. 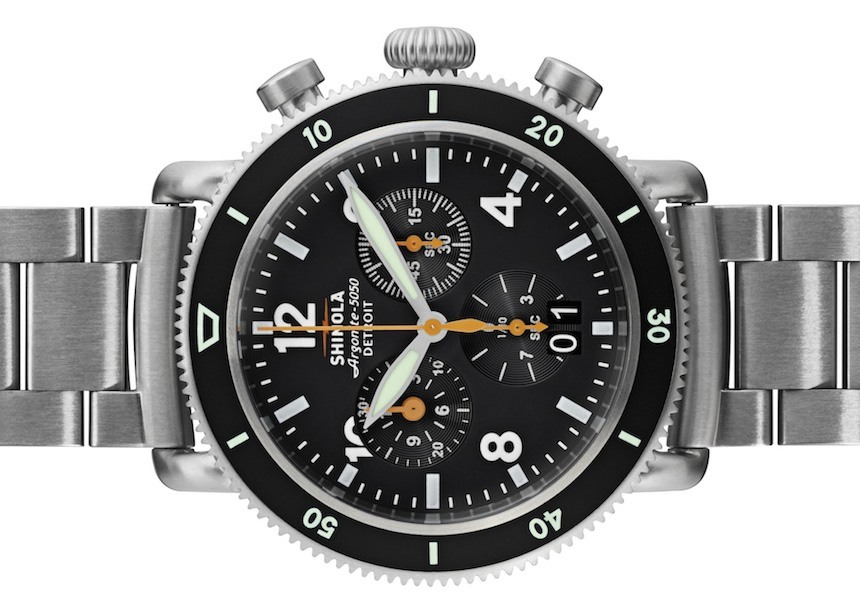 I think the high-end watch lover wants a brand like Shinola to do what Fossil was never able to do. That is to inspire more Americans to get into watches again, or for the first time. Shinola has an attractive and distinctive look which I think the mainstream can really rally behind. Being quartz-based hurts the brands rapport with watch snobs, but in a sense so does the price. There is nothing wrong with a quartz watch, but when they are priced like some mechanical watches then it is possible to take issue.

In the $200 – $500 range I think Shinola is a great “gateway watch” for people just getting into timepieces or who have a more limited budget. The design is there, and the watches are nice to wear. Even some seasoned watch lovers might get a Shinola to play with at prices like that. However, the Shinola Black Blizzard watch will retail for $1,500 (for either version) when it is released later this year, in November of 2014. There are mechanical chronograph watches in titanium at that price, and the average price for titanium-cased quartz chronographs from other brands is typically $500 and under. Shinola has a much slicker retail concept than most of those brands, but it does concern me when prices reach levels that for an expert like me are difficult to understand in a product meant for the mainstream.