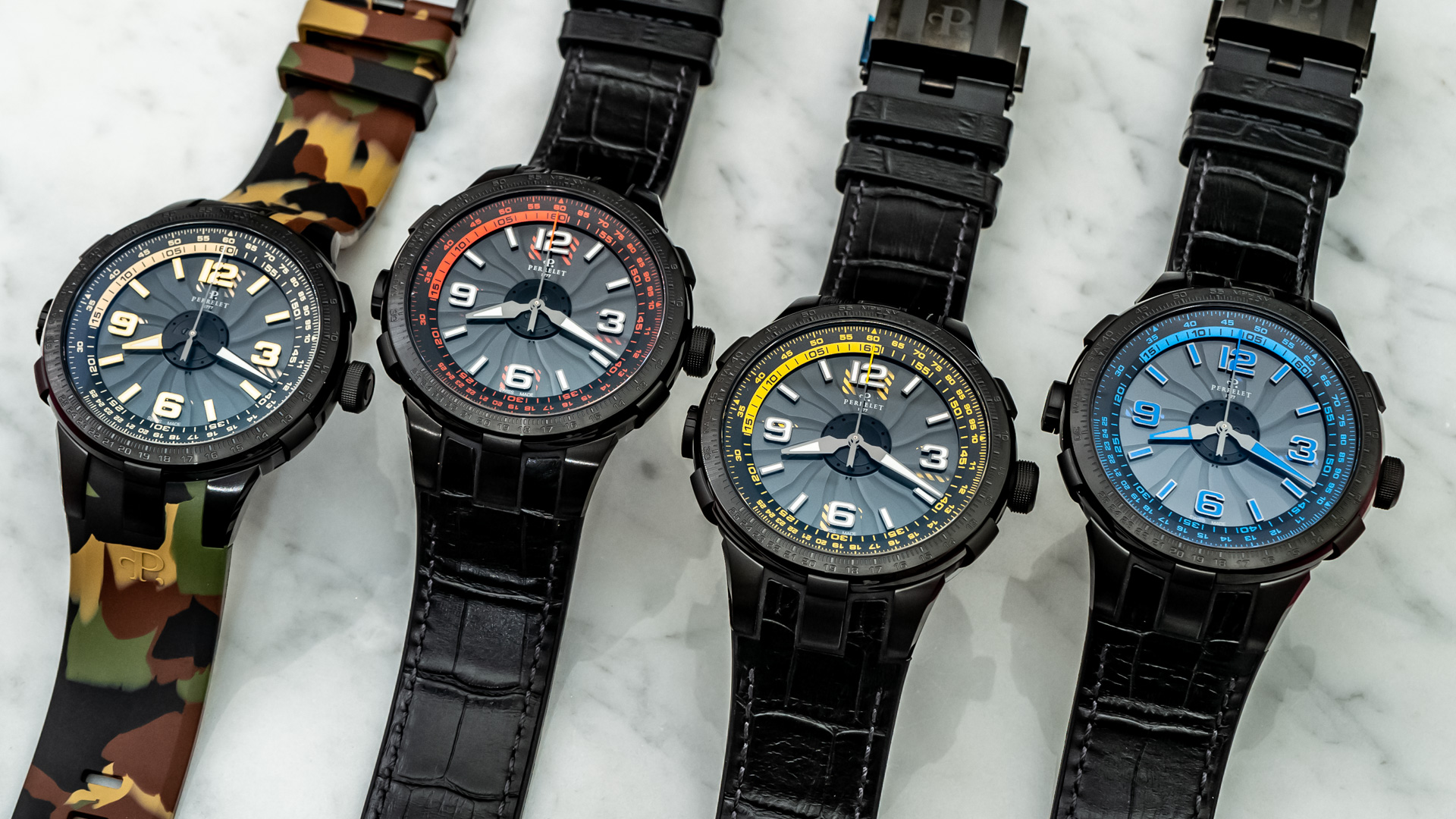 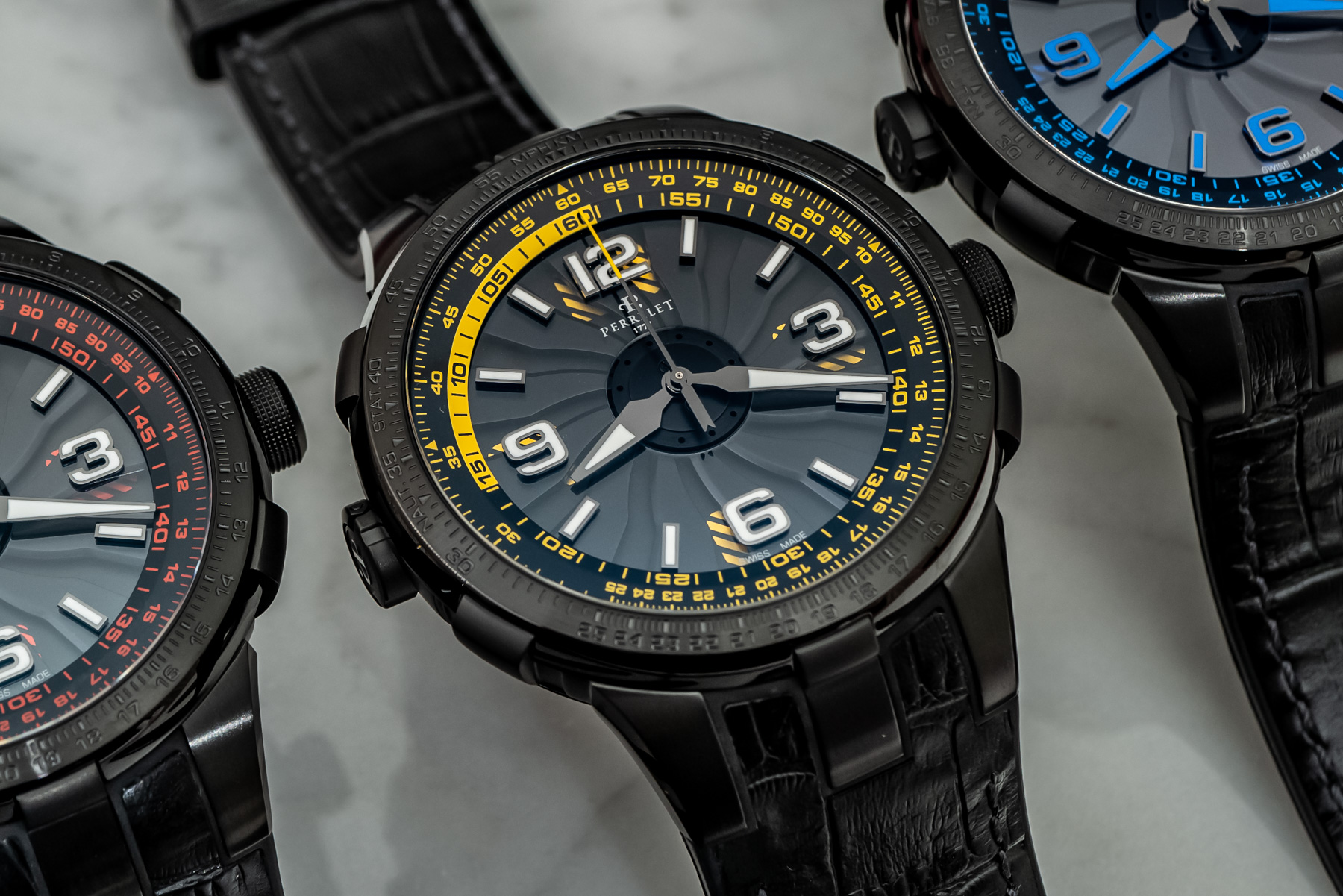 When it comes to brands that have made a lasting impact on horology, few can match the accomplishments of Perrelet’s founder and namesake, Abraham-Louis Perrelet. Born in the village of Le Locle in the Swiss Neuchâtel mountains in 1729 , Perrelet’s greatest and most lasting achievement was the development of the automatic, self-winding movement in 1777. While any number of brands can boast of advanced complications or changes to escapements on their horological curriculum vitae, it’s hard to think of an innovation that changed the face of watchmaking more than the automatic movement. 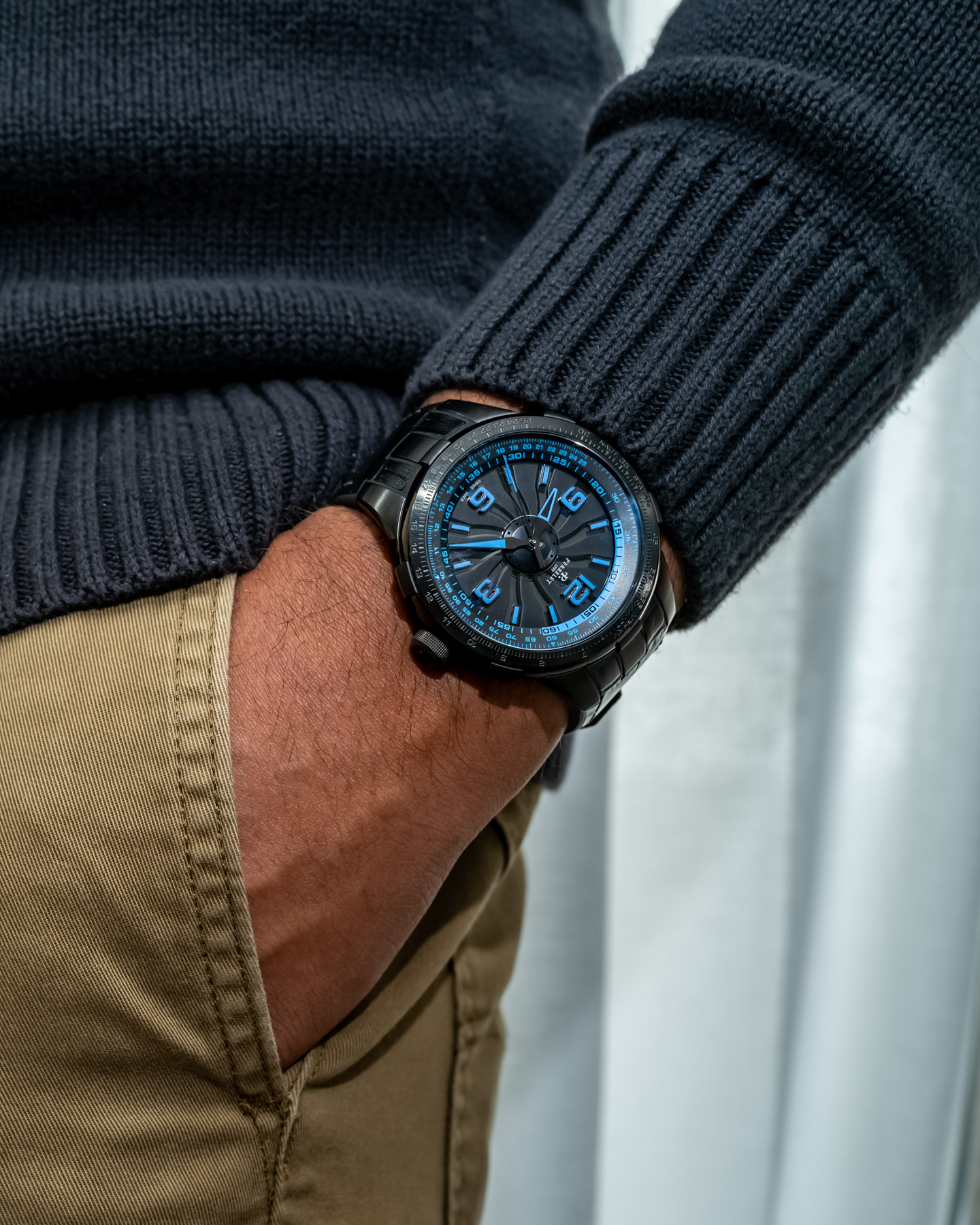 Over the past two-and-a-half centuries, Perrelet has continued Abraham-Louis’ proud watchmaking tradition that views innovation as more than just adding complication for the sake of complication, but one that enhances the user experience and served functional need. In fact, Abraham-Louis Perrelet even invented the first pedometer to measure steps and distance! In later years, Louis-Federic Perrelet followed in his grandfather’s footsteps, while focusing his his horological ambitions on astronomy and the sciences, developing a number of “intelligent” watches. Clearly, the Perrelet family was ahead of its time. The family’s horological prowess was widely recognized and Louis-Frederic even served as watchmaker-mechanic to three French kings.

Fast forward to 2021, and Swiss independent Perrelet has reimagined its approach to watchmaking, with a renewed focus on research and development. As part of the brand’s restructuring and re-commitment to innovation, the brand’s owner and president, Miguel Rodriguez decided that Perrelet’s timepieces should be equipped with a new automatic caliber—one that would certainly bring a smile to the face of Abraham-Louis. As Rodriguez notes, “We have the advantage of owning several movement and component production sites. Combined with a prestigious heritage, that sets us apart as one of the leading independent watchmakers in Switzerland.” This consolidation of manufacturing under one metaphorical roof allows Perrelet to create everything from pallets and balances to escapements and balance springs to their exacting specifications. The result? The automatic caliber P-331-MH, 100% produced in the Jura Valley of Switzerland. 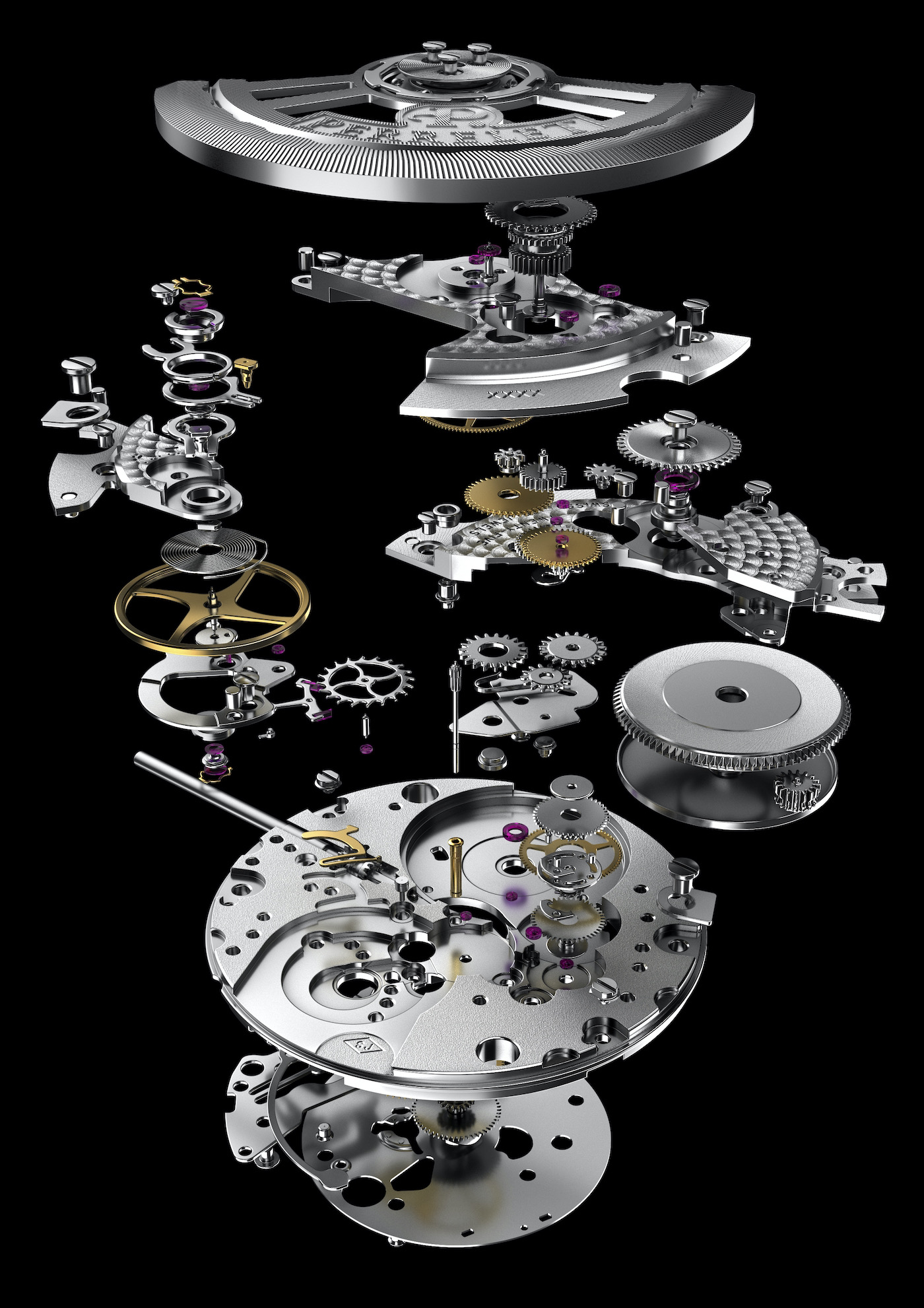 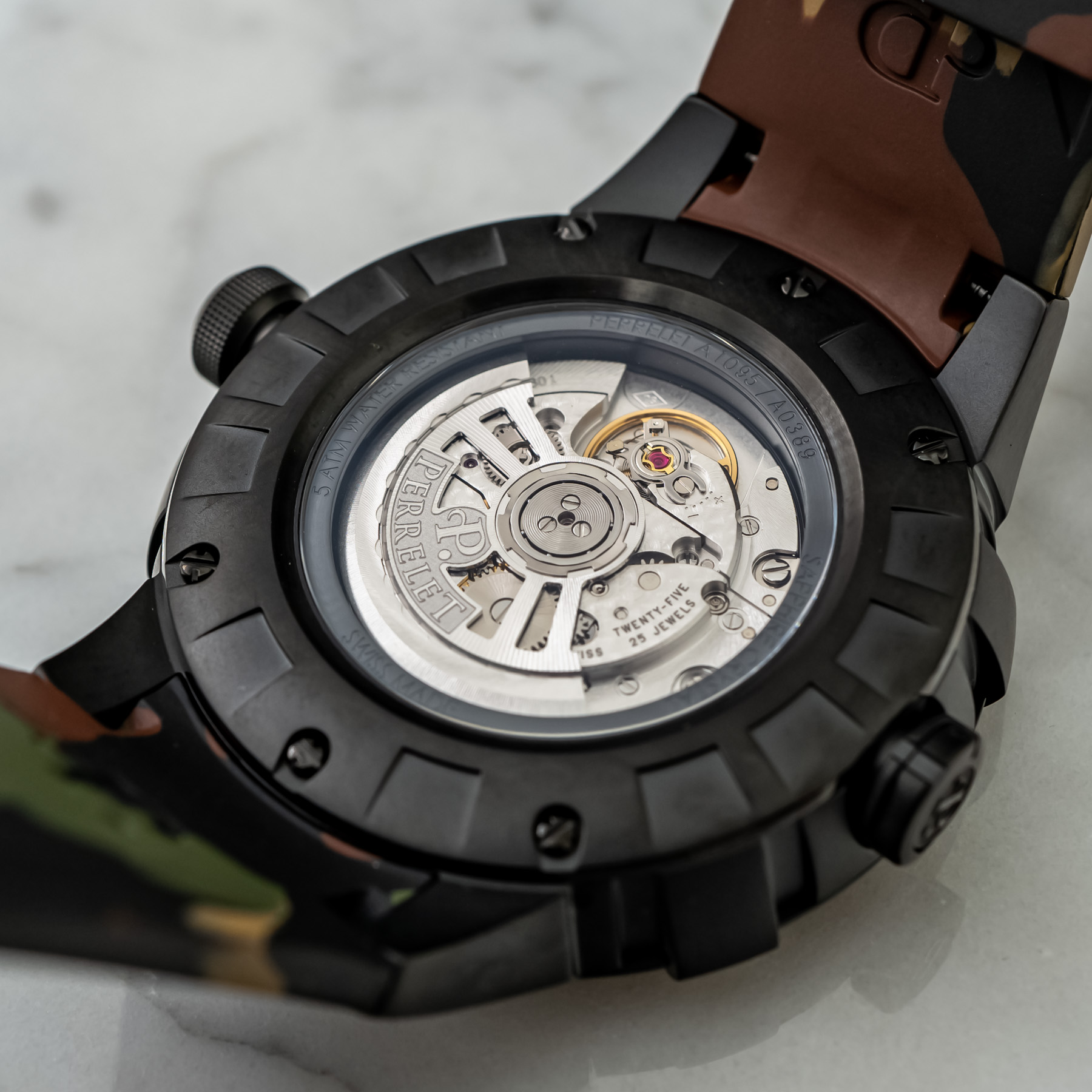 The P-331-MH differs substantially from its predecessor, with improved finishing on the teeth of the escape wheel, superior quality rubies, a new lubricating system of the reversers to improve the performance of the bi-directional winding system, and a balance-wheel fitted with a double-cone Incabloc® shock absorber for impact protection. Ultimately, these upgrades have resulted in a movement that obtained Chronofiable® certification through the Laboratorie Dubois of La Chaux-de-Fonds — a certification that subjects the movement to everything from accelerated aging tests to traction tests on the crown stem to violent impact tests at 5000G, not to mention resistance to temperature variation and magnetic fields. With such a robust and reliable movement, no surprise that the P-331-MH movements boasts COSC-chronometer certification. 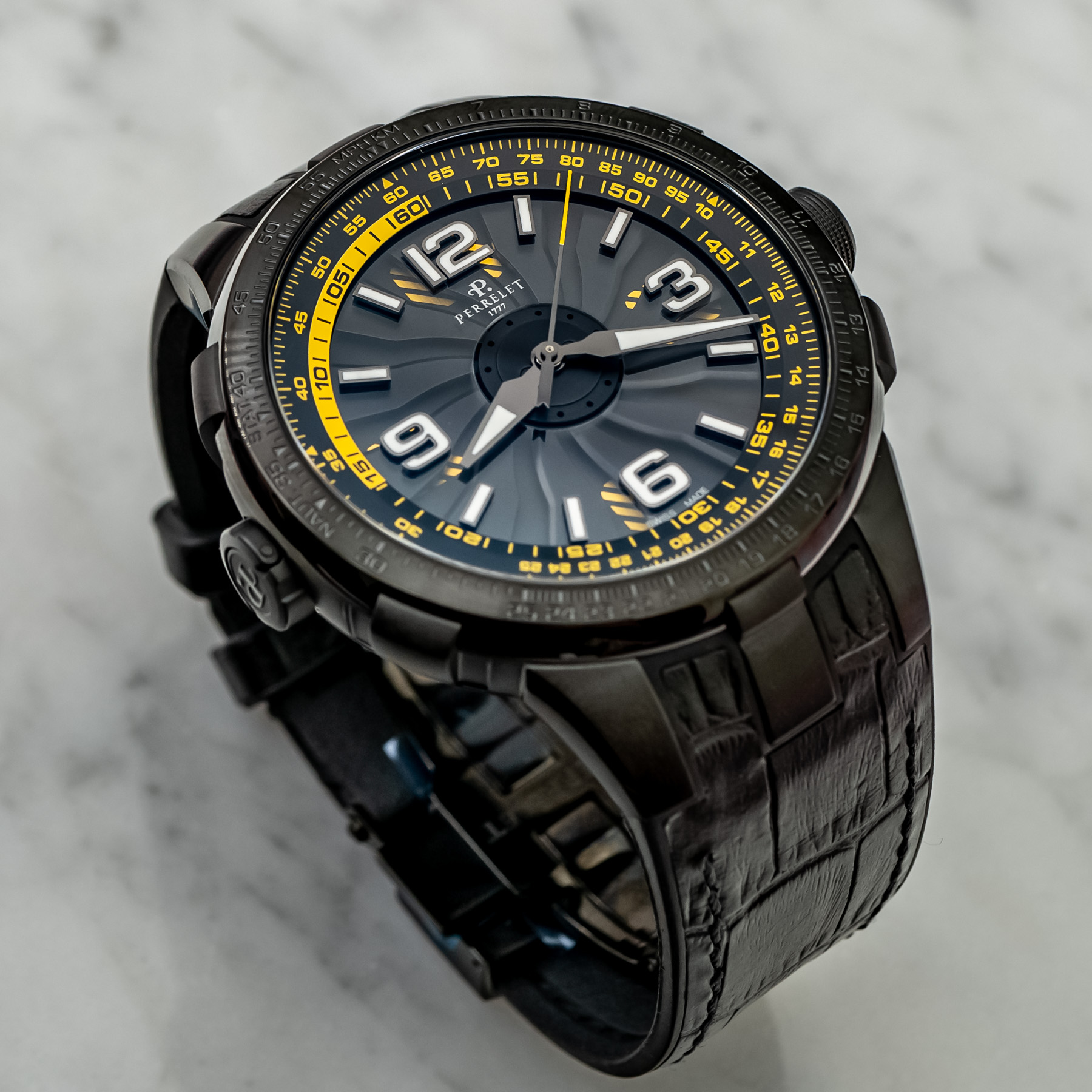 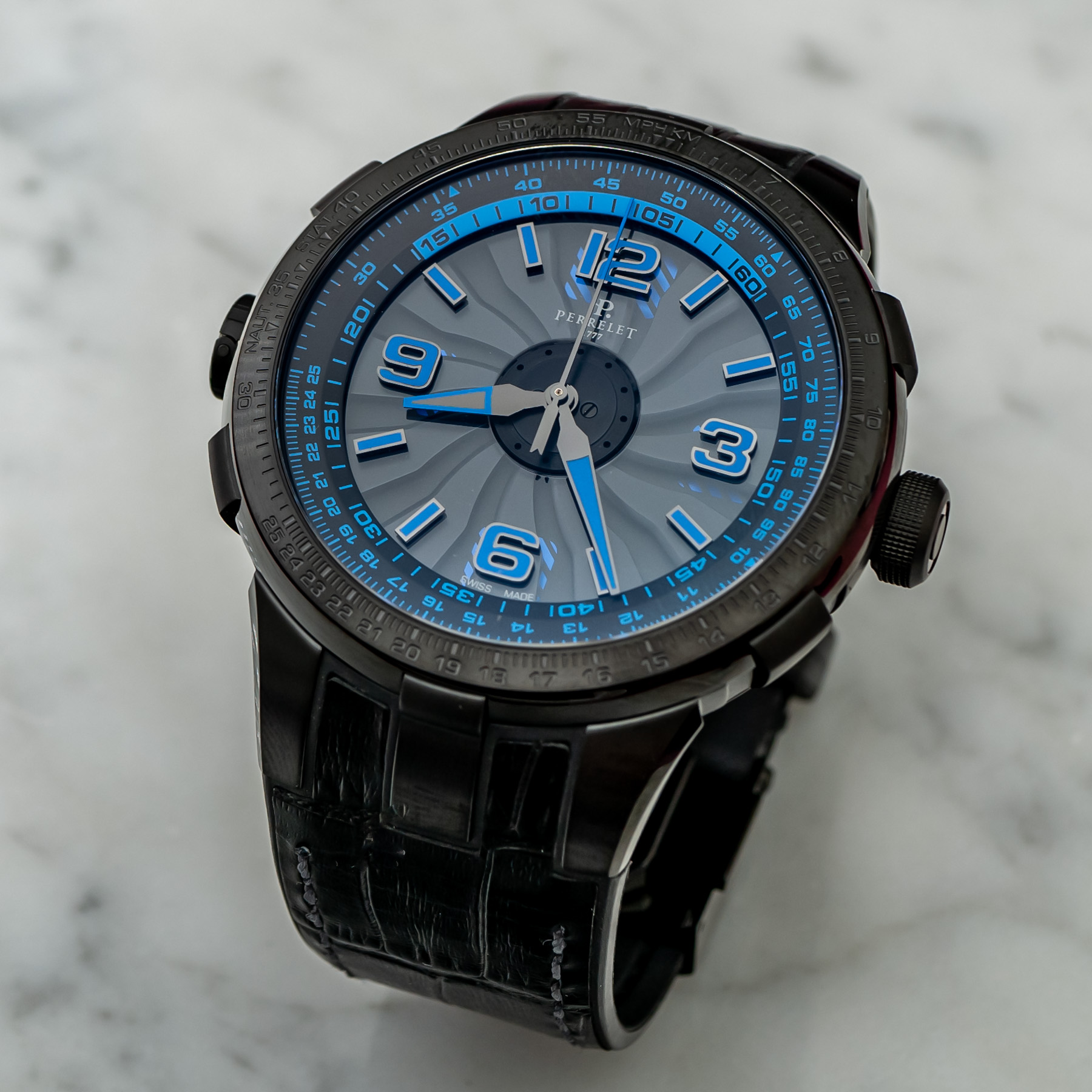 As impressive as the new movement is, the magic happens when the P-331-MH is put to work in the brand’s utterly distinctive Turbine collection. Originally launched in 2009, the Turbine line features dials animated by Perrelet’s Turbine Technology. An evolution of Perrelet’s Double Rotor Technology that utilizes a double oscillating weight (one positioned beneath the caliber and one on the dial side) that rotate in synchrony to power the mainspring, Turbine Technology creates a dynamic and animated dial that produces a dazzling spectacle on the wrist. While the Turbine line features a range of styles, the Turbine Evo represents the brand’s novel take on the classic sport watch. Housed in a 44mm diameter stainless steel case, the Turbine Evo features a smooth, flat bezel and distinctive lugs that integrate seamlessly with both the integrated bracelet and strap. 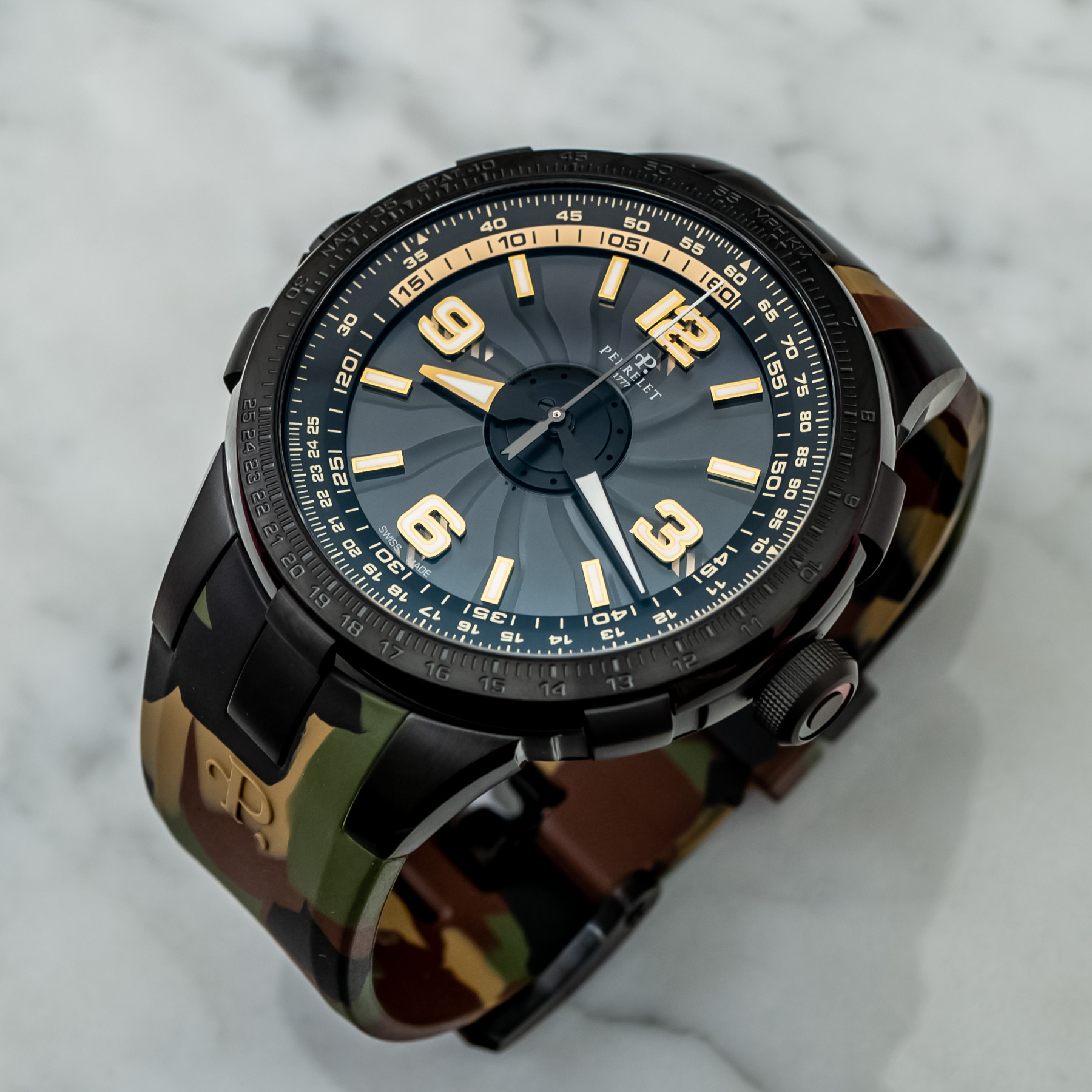 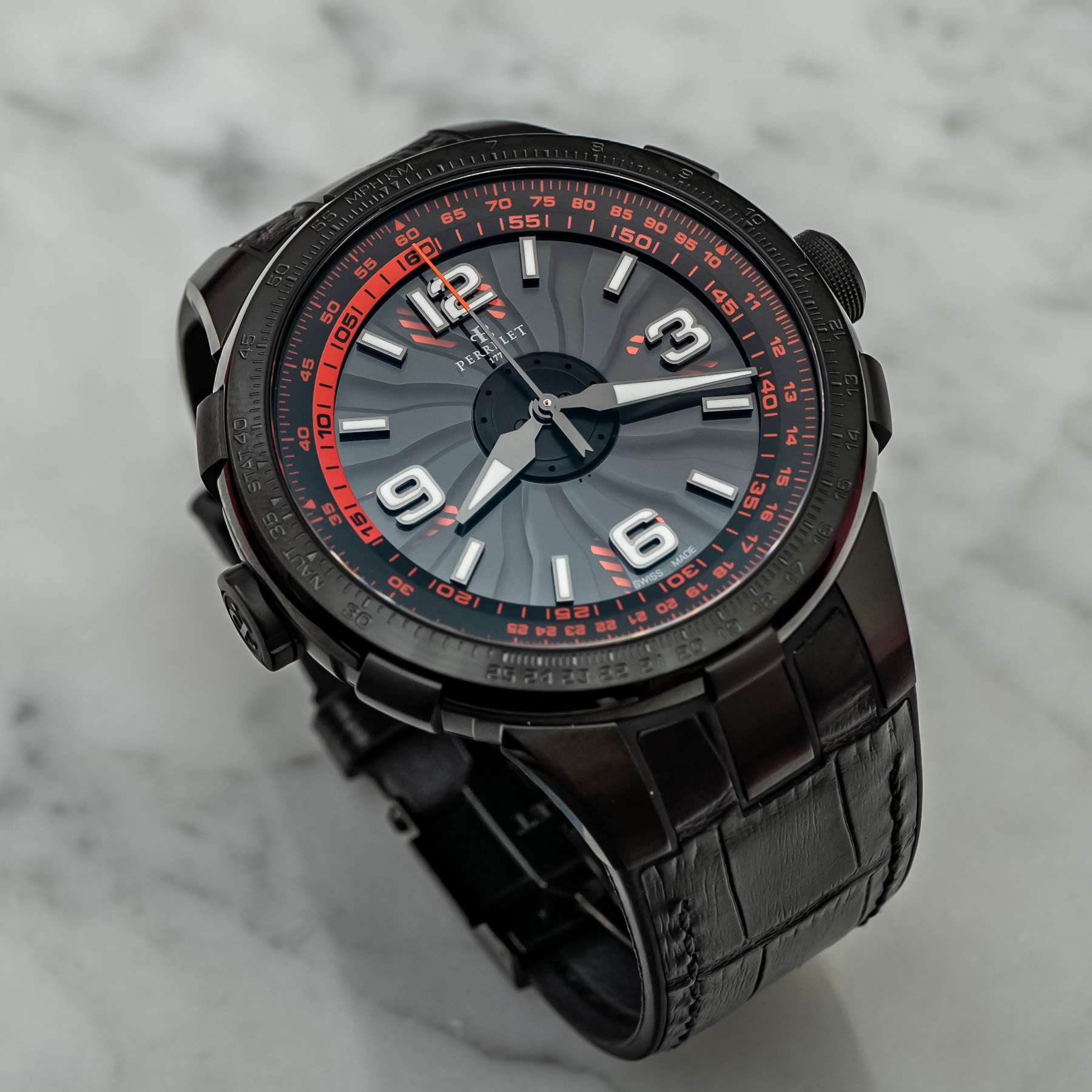 The refinements throughout the case allow the Turbine Evo’s unmistakable dial to shine. The 12 black anodized propeller blades on the dial (with five tungsten counterweights) create a mesmerizing effect as they rotate with the movement of your wrist, revealing the vibrant shades of red, electric blue, or gold in the subdial beneath the blades. The hour and minute hands are luminescent, with a seconds hand color-matched to the subdial. In addition to the range of dial colors, the case is available in stainless steel or with PVD coating in either black or gold. Regardless of which model you choose, the P-331-MH automatic movement will be on full display behind a sapphire caseback. 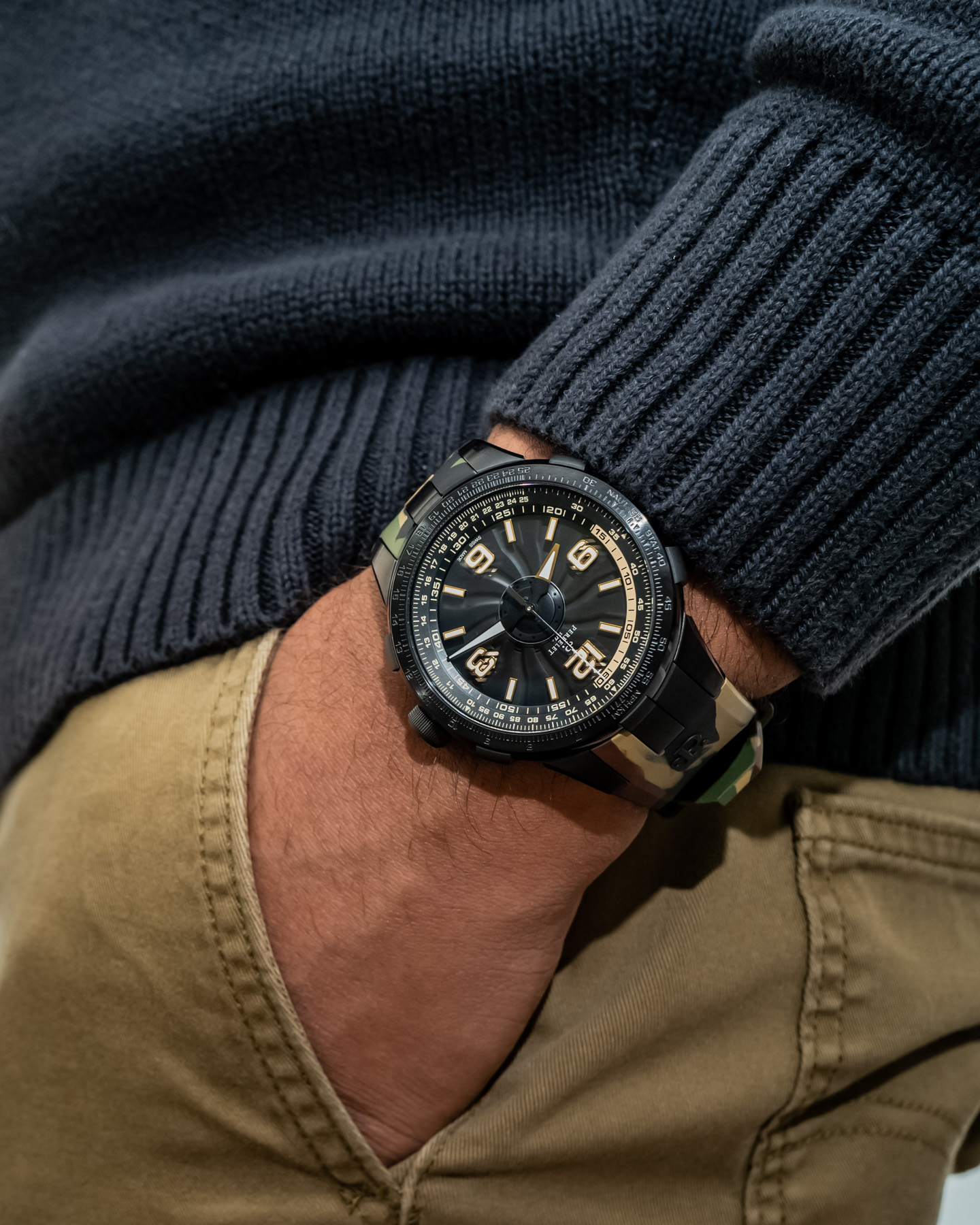 If your tastes tend more towards the aeronautical, be sure to check out the aviation-inspired Turbine Pilot. First launched in 2014, the Turbine Pilot features the line’s signature double rotor dial but adds classic elements such as bold Arabic numerals at 12, 3, 6, and 9 and a circular slide rule. The modern aesthetics and execution, coupled with traditional analog tools for flight calculations, combine to create an original, but highly functional take on the pilot’s watch. 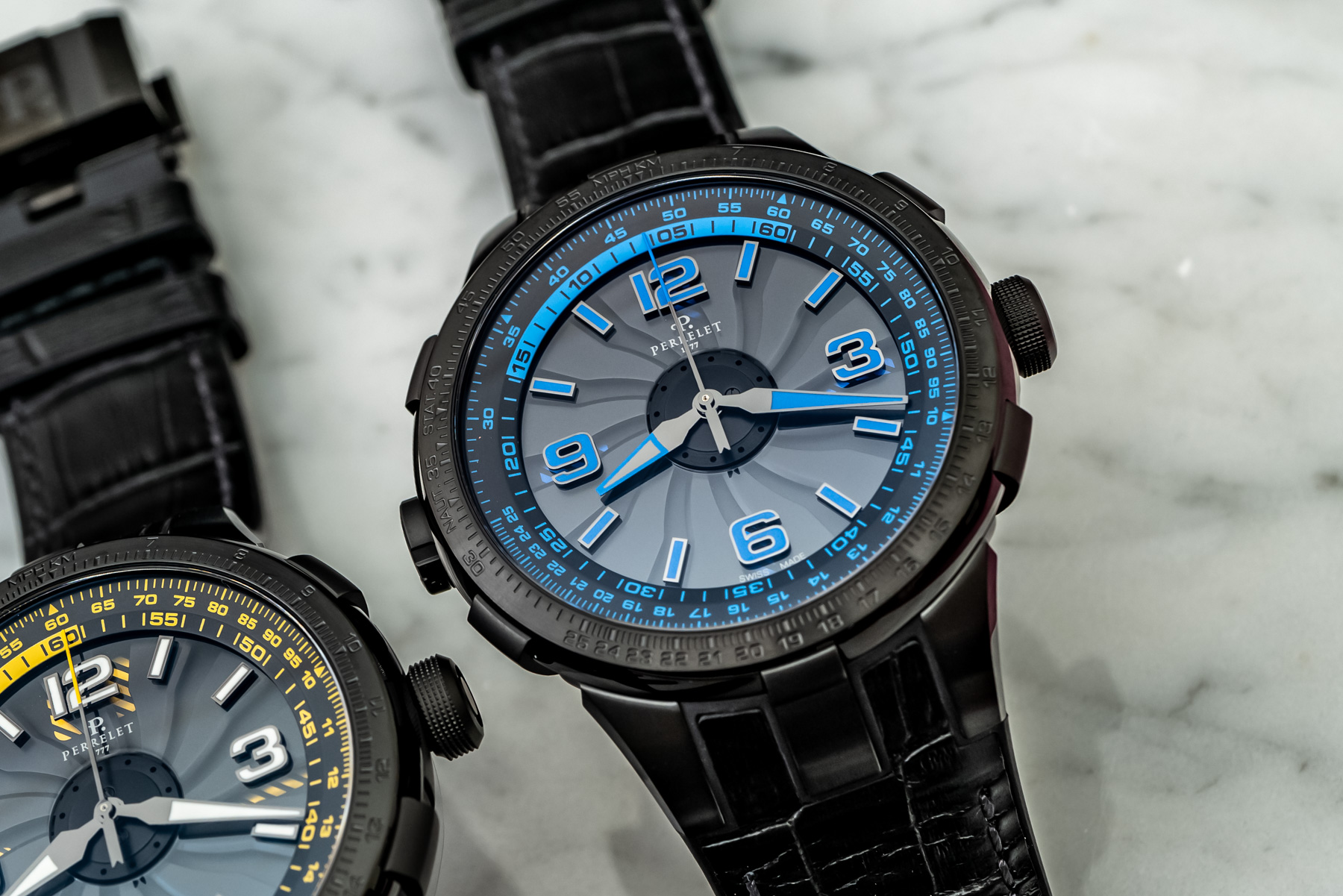 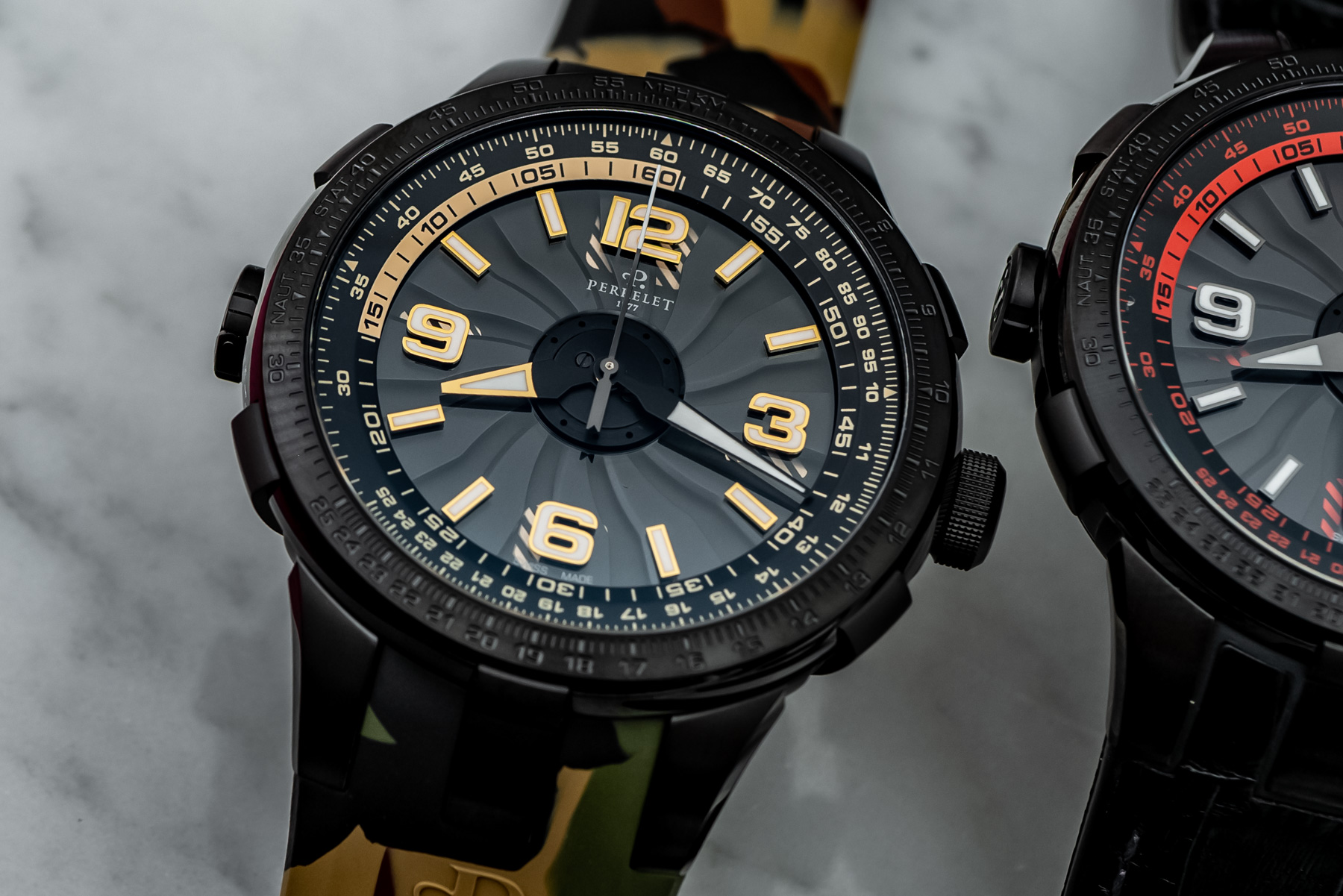 Coming in at a generous 48mm in case diameter and cased in stainless steel with black PVD coating, the Turbine Pilot is water-resistant to 50m. Unlike a traditional watch, the crown at 3 o’clock operates the bidirectional rotating bezel, while the time is adjusted via an integrated crown at 9 o’clock. 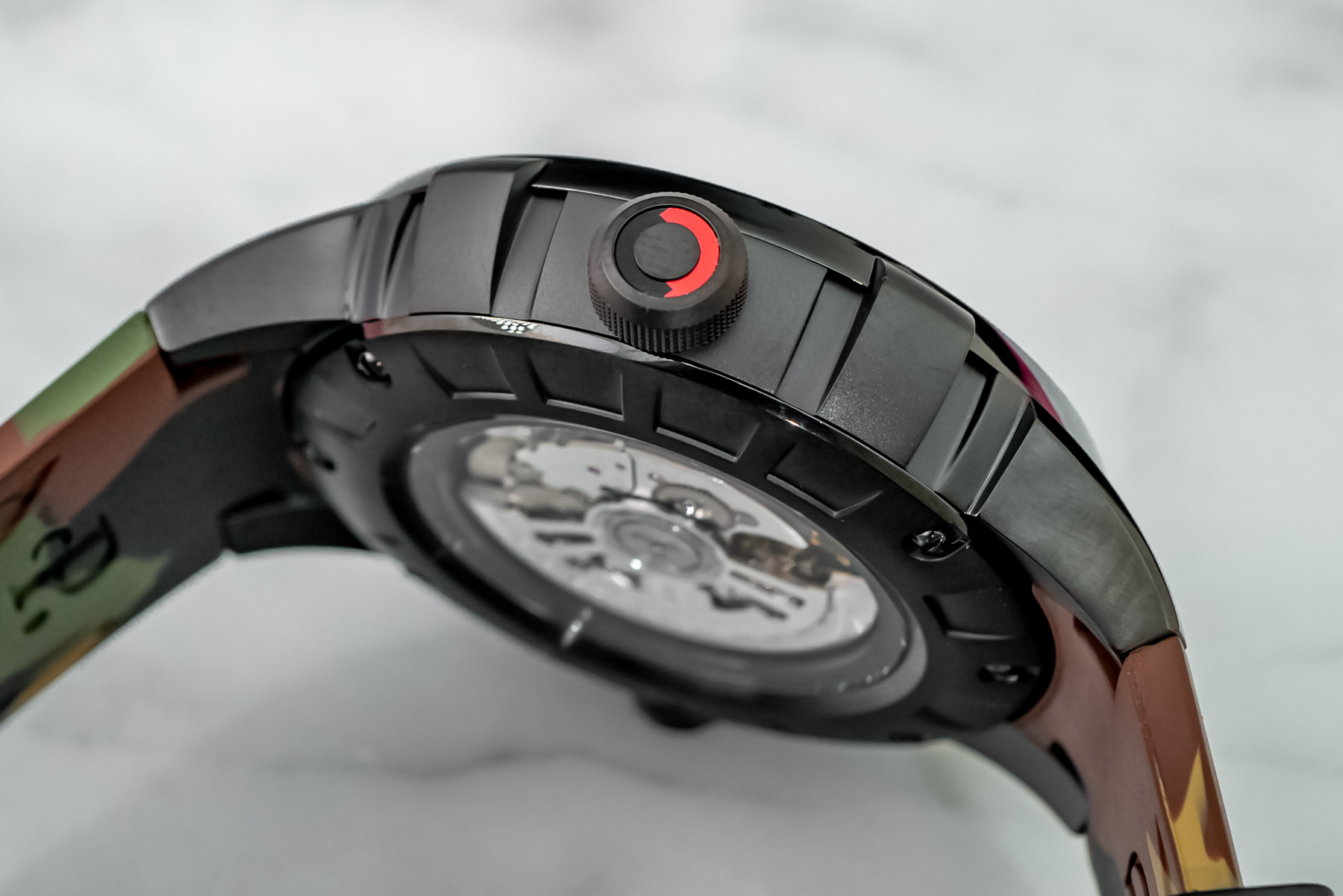 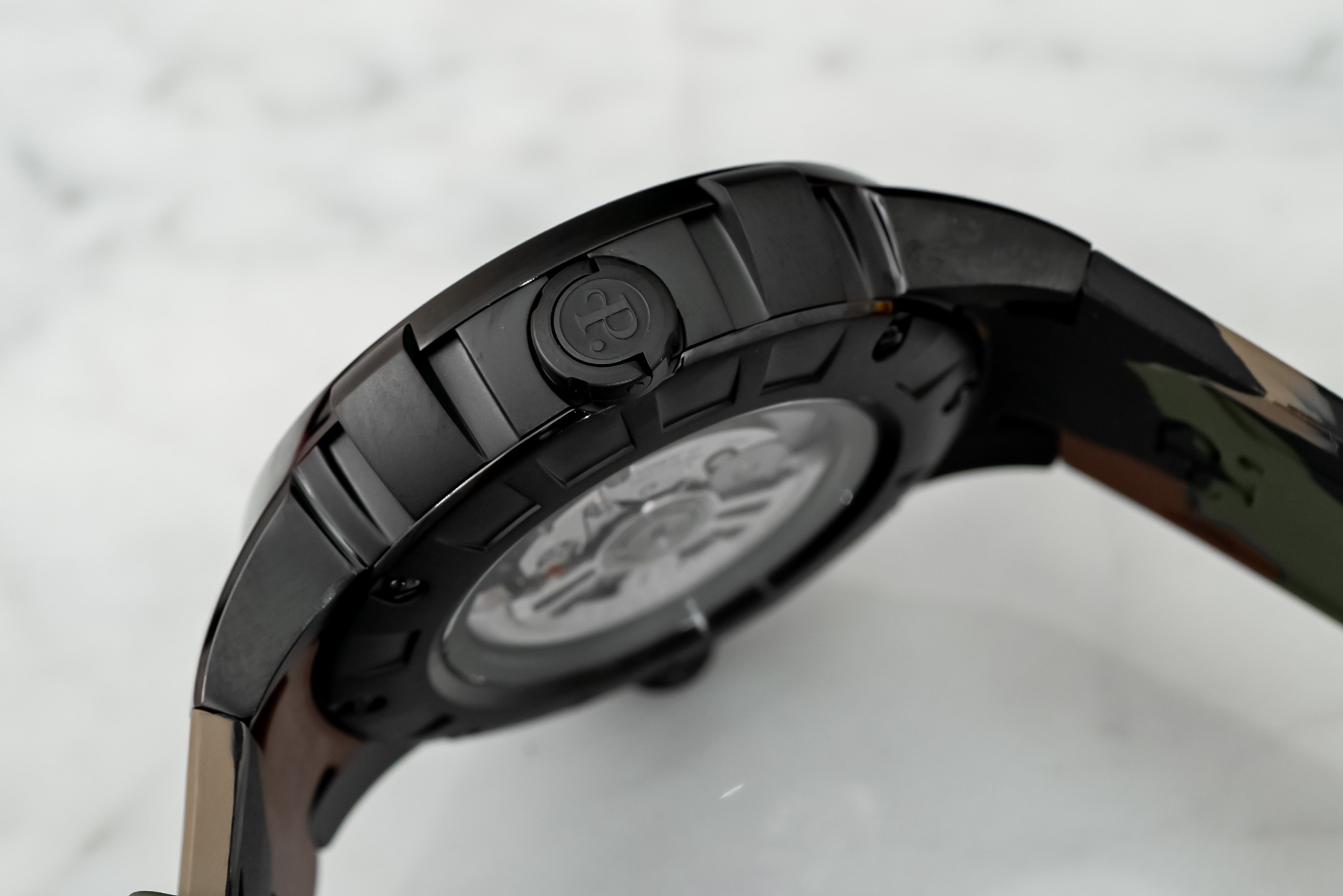 Like the Turbine Evo, the Pilot features luminous hands and Arabic numerals for nighttime legibility. The accent colors on the dial and bezel of each Turbine Pilot are paired with a striped subdial that is revealed as the blades propellor blades on the dial turn with the movement of your wrist. Once again, the P-331-MH is on full display behind a sapphire caseback. Each colorway in the Turbine Pilot collection is paired with a rubber, fabric and rubber, or leather and rubber strap with custom folding clasp to complement the case and dial. 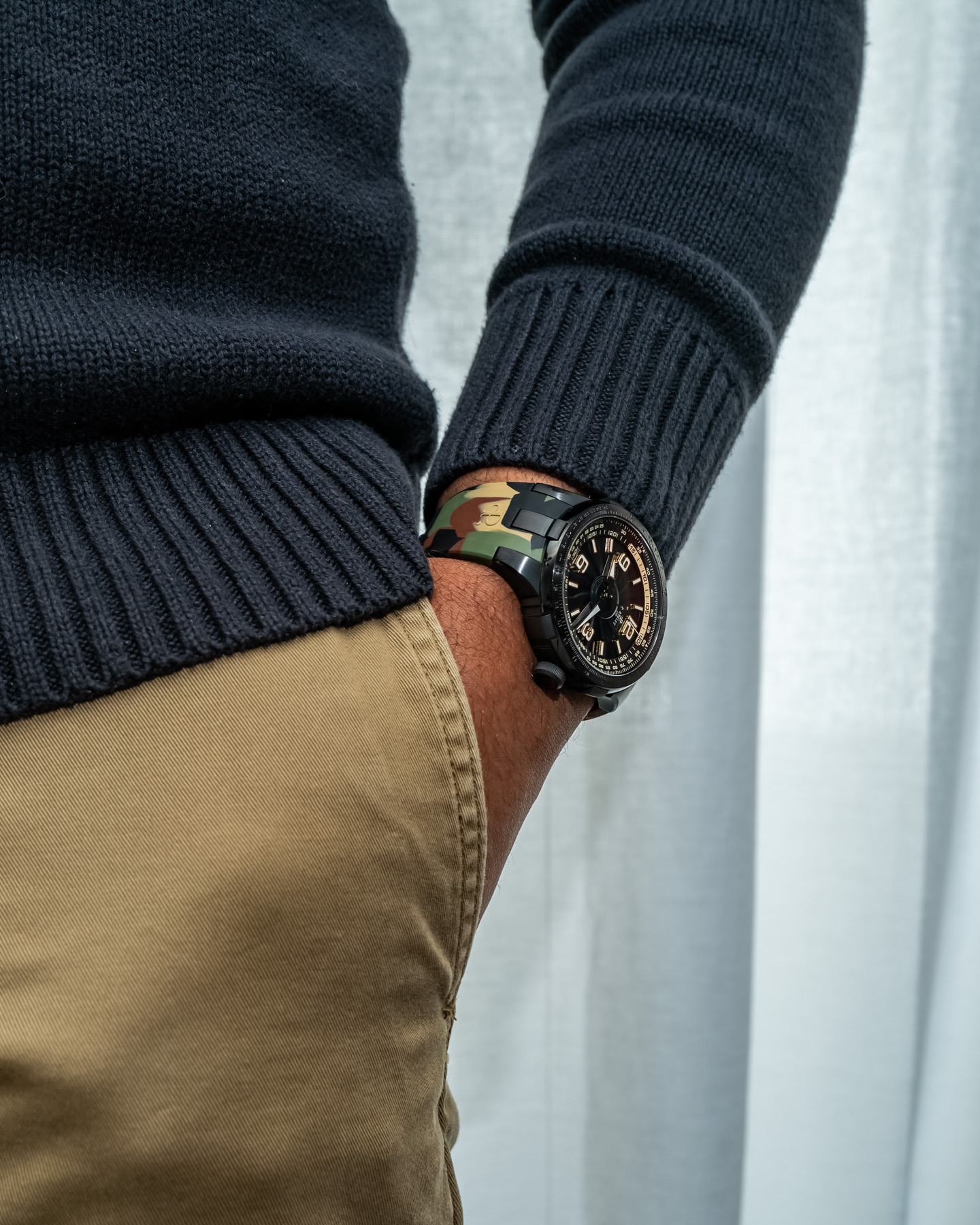