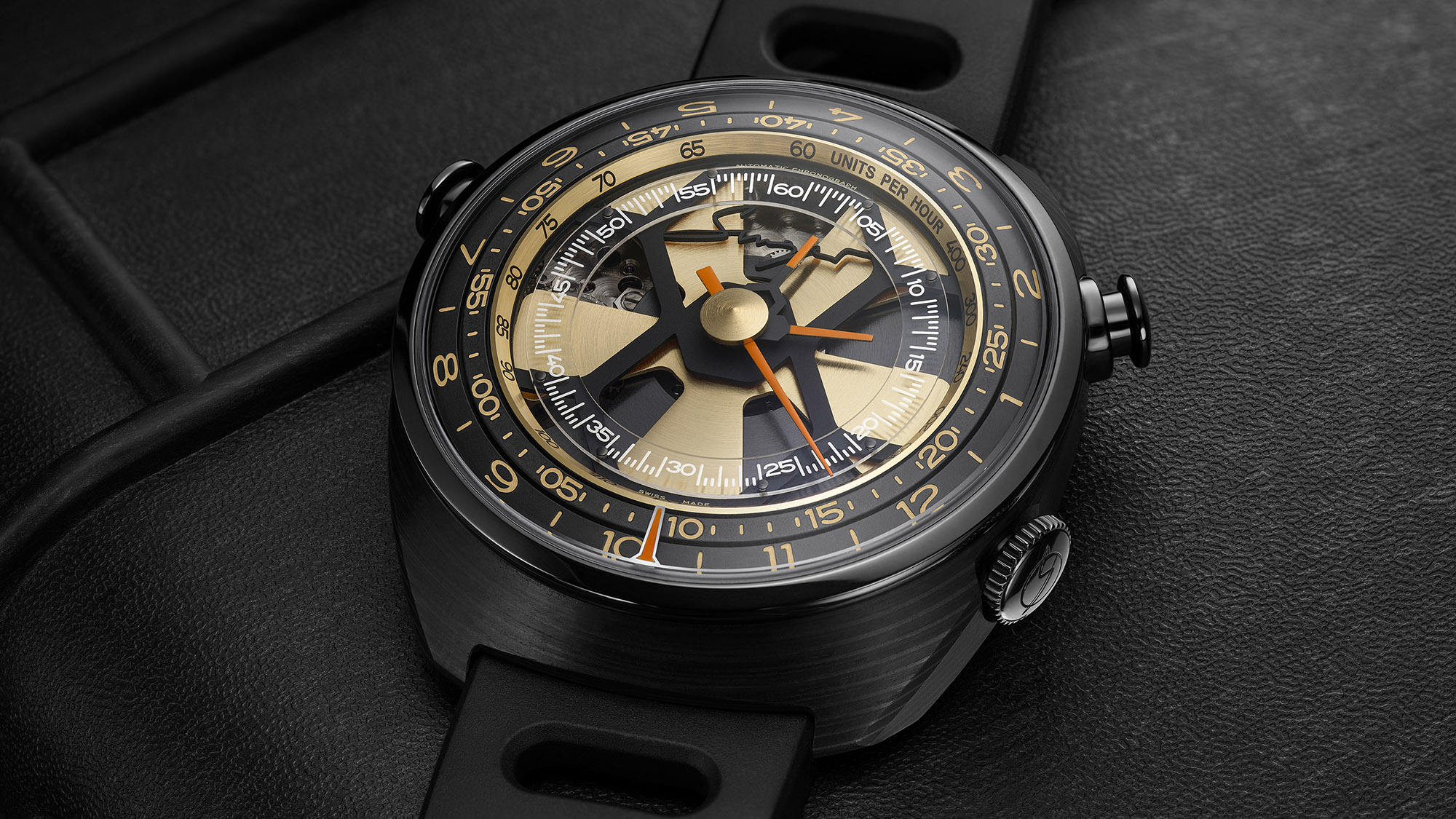 In the five years since the initial launch of the Singer Track1 chronograph in 2017, the wildly unorthodox restomod Porsche-inspired design has developed a sizable cult following around its unique layout and dramatic ’70s-inflected styling. For the most part, the brand has remained close to this initial concept over the past half-decade, mostly contenting itself with a handful of case material and dial color options. As part of the festivities surrounding sister company Singer Vehicle Design’s presence at the world-famous Monterey Car Week in central California, Singer has unveiled what may well be the Track1’s most dramatic departure to date. With a pared-back skeleton dial design and surprisingly subtle carbon construction, the new limited-run Singer Track1 SKLT CARBON Edition aims to capture the spirit of Singer Vehicle Design’s lightweight, handcrafted restomod Porsche 911s with a tasteful yet sporty new execution. 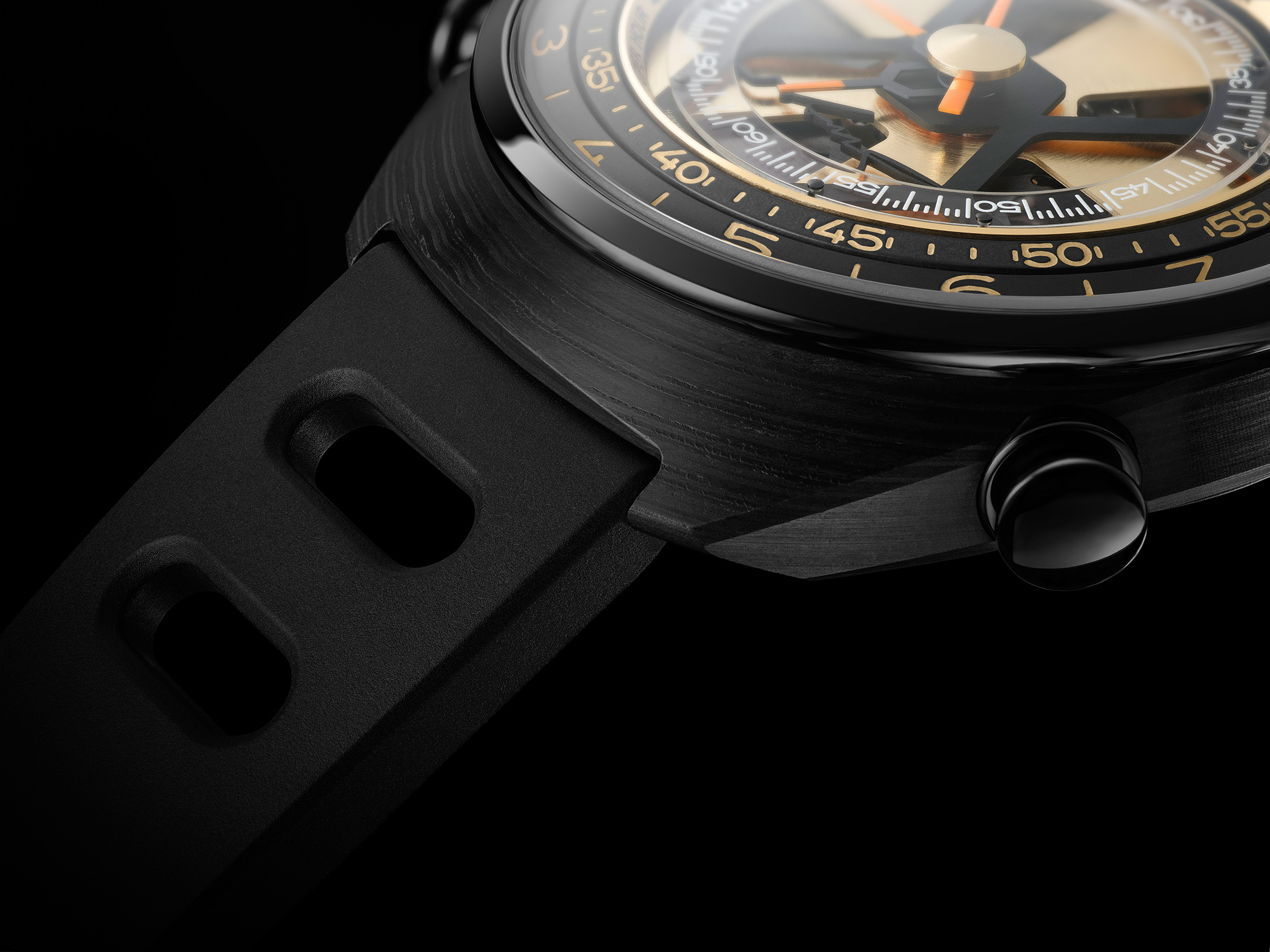 Like previous iterations of the design, the Singer Track1 SKLT CARBON Edition measures in at 43mm-wide and a sizable 15mm-thick, but Singer gives this design a more contemporary and purposeful character in images with a main case body in striated forged carbon fiber. Forged carbon cases are becoming increasingly common for modern sports chronographs, but Singer’s restrained execution sets it apart from the field here. Rather than the wildly chaotic mottled texture of many other forged carbon designs or the familiar checkerboard pattern of woven carbon fiber, Singer’s striated approach gives the Track1 SKLT CARBON Edition a subtle, almost organic matte black look in images, with ringed striations that call to mind wood grain in photos. With this subtle matte base, the polished black DLC-coated Grade 5 titanium used for the crown, the oversized pump pushers at 10 o’clock and 2 o’clock, and the narrow smooth bezel stand out in photos despite maintaining the black-on-black colorway. The tonneau-style overall form should seem familiar to fans of the brand, with minimal notched lugs and an arcing case side chamfer that emphasizes the pronounced slope of the case profile. Naturally, Singer fits this case with a sapphire display caseback to highlight its ornate bespoke movement. Singer rates the Track1 SKLT CARBON Edition for a respectable 100 meters of water resistance. 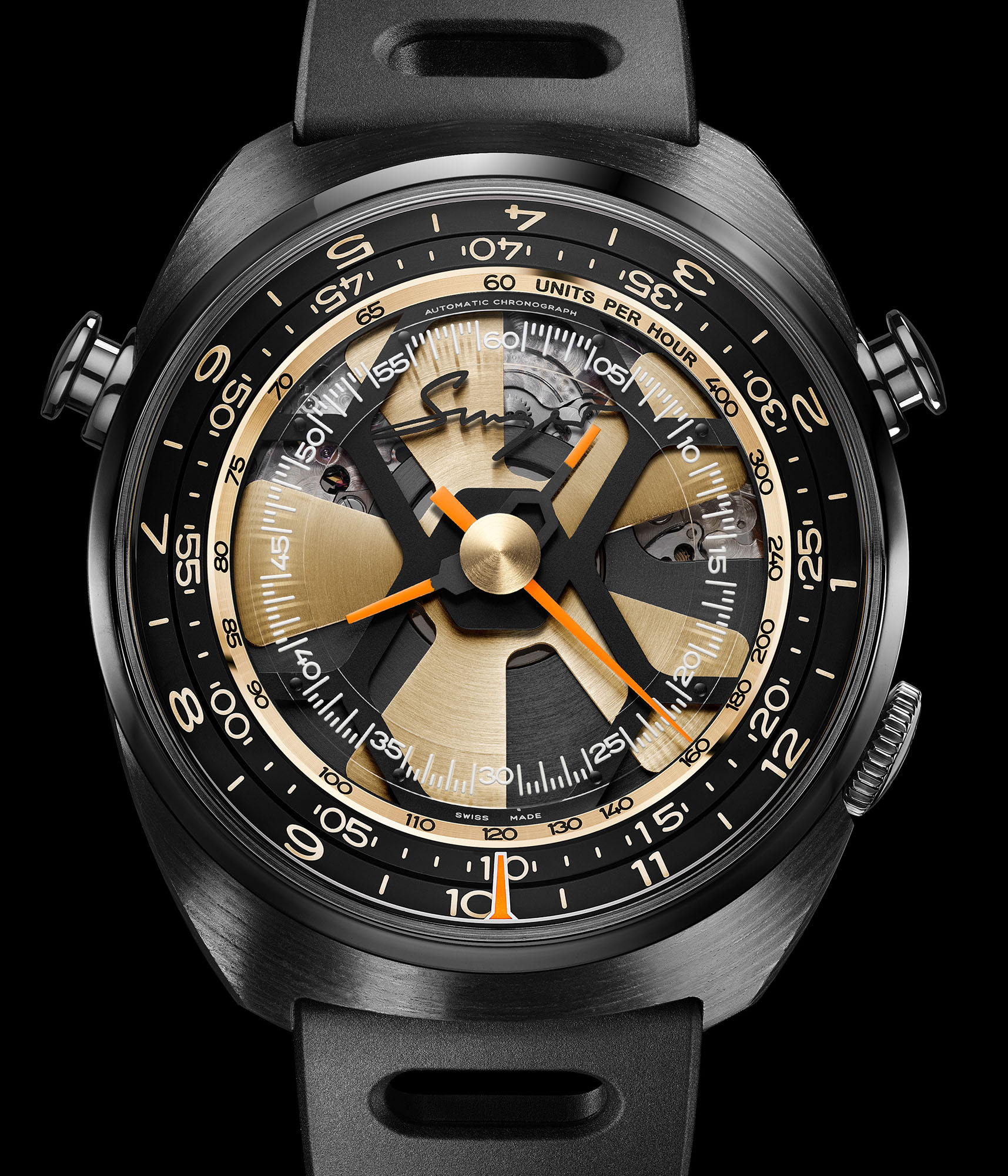 For those unfamiliar with Singer’s unique approach to chronograph design, the skeleton dial of the Track1 SKLT CARBON Edition may seem confusing at first glance. In practice, the entire central section of the dial is given over to the chronograph complication, with central hands for seconds, minutes, and hours aided by a printed sapphire seconds scale ring that appears to float above the skeletonized movement below in photos. For standard timekeeping, one instead needs to look to 6 o’clock, where a pair of outer gilt-printed black ceramic rings interact with a vibrant signal orange marker to indicate the current time. All of this is more or less standard fare for the Track1 series (minus the sapphire seconds ring), but the Track1 SKLT CARBON Edition takes on a life of its own with its skeleton dial treatment. While many skeleton designs are intricately layered and detailed, Singer’s approach to skeletonization is remarkably simple in initial images. The uppermost skeleton dial layer is a large hexagonal honeycomb grid in black, with an oversized Singer signature at 12 o’clock integrated directly into the grid material. Just below this lies what might well be mistaken for the Track1’s concealed winding rotor, but is in fact the series’ five-spoke minutes wheel in gold, shaped to evoke the classic silhouette of Porsche’s signature Fuchs wheels. This oversized wheel transfers torque from the central chronograph handset to the outer rotating timekeeping rings, connected with a horizontal friction clutch. The actual winding rotor lies just beneath this wheel in stealthy radially brushed black, acting as an effective visual barrier between the skeleton dial and the perlage movement plates and bridges below in initial images. With its broad, cleanly finished elements, this skeleton layout manages to capture some of the visual drama of traditional skeleton dial designs but appears to have fewer legibility concerns than its competitors (although there are admittedly still a few). 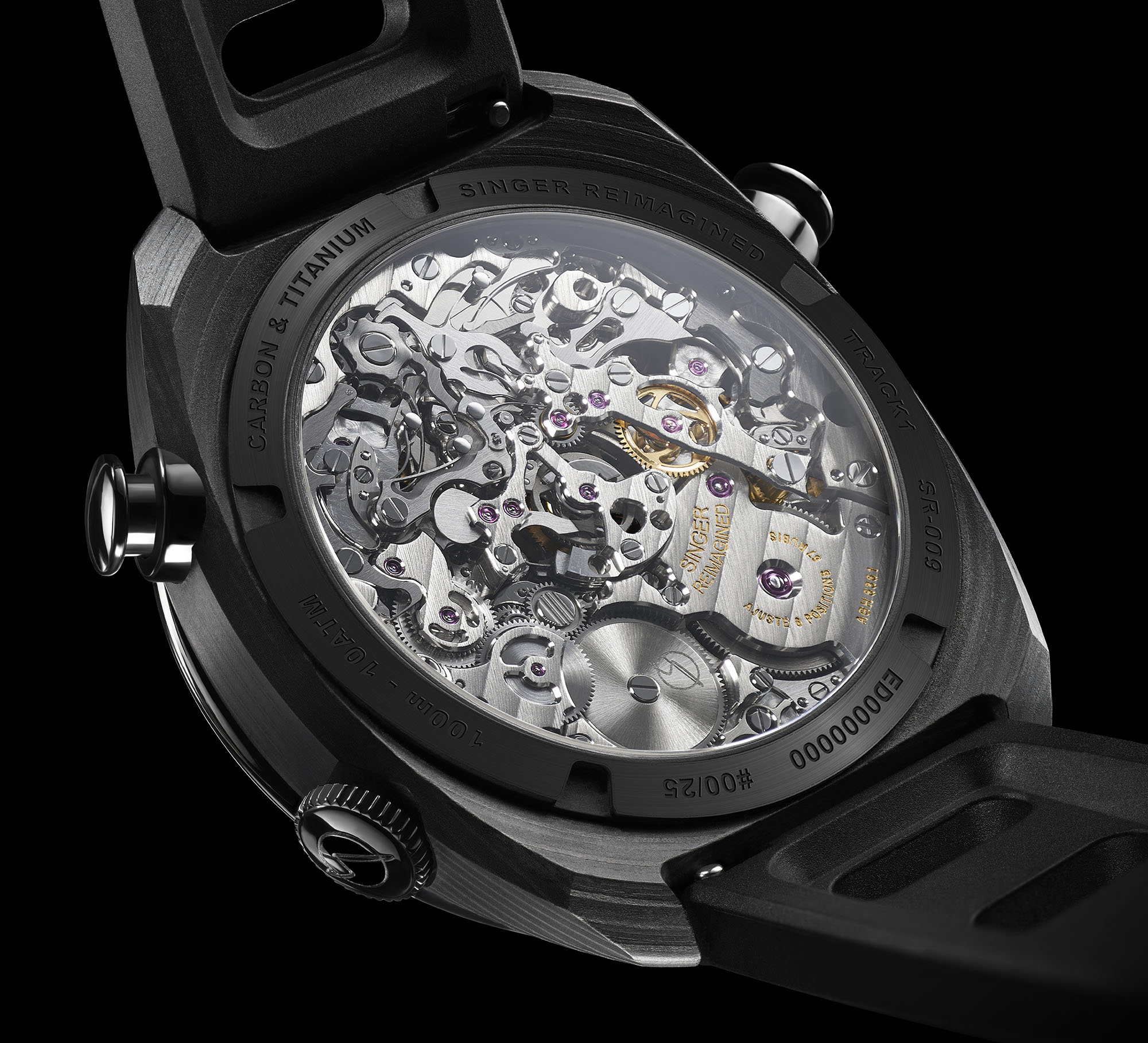 The Calibre Singer Reimagined 6361 automatic chronograph movement inside the Singer Track1 SKLT CARBON Edition is made exclusively for Singer by Swiss movement specialist Agenhor. Occasionally referred to as the AgenGraphe movement, this intricate 477-piece powerplant is a complex mechanical spectacle when viewed from the caseback side. Freed from the obstruction of its dial-side winding rotor, the rear of the movement is free to visually embrace its ornate web of bridges, plates, levers, and gears in images. The Calibre Singer Reimagined 6361 showcases a broad range of finishes to accompany this mix of elements, including Côtes de Genève, polished anglage, perlage, vertical brushing, radial brushing, and gold-inlaid engraved text. Although much of the movement architecture is exotic, from the outer rotating hours and minutes rings to the proprietary AgenPit balance regulator, the movement still offers solid (if unspectacular at this price point) performance including a 60-hour power reserve at a 21,600 bph beat rate. Singer completes the watch with a sporty rally strap in textured black caoutchouc rubber. 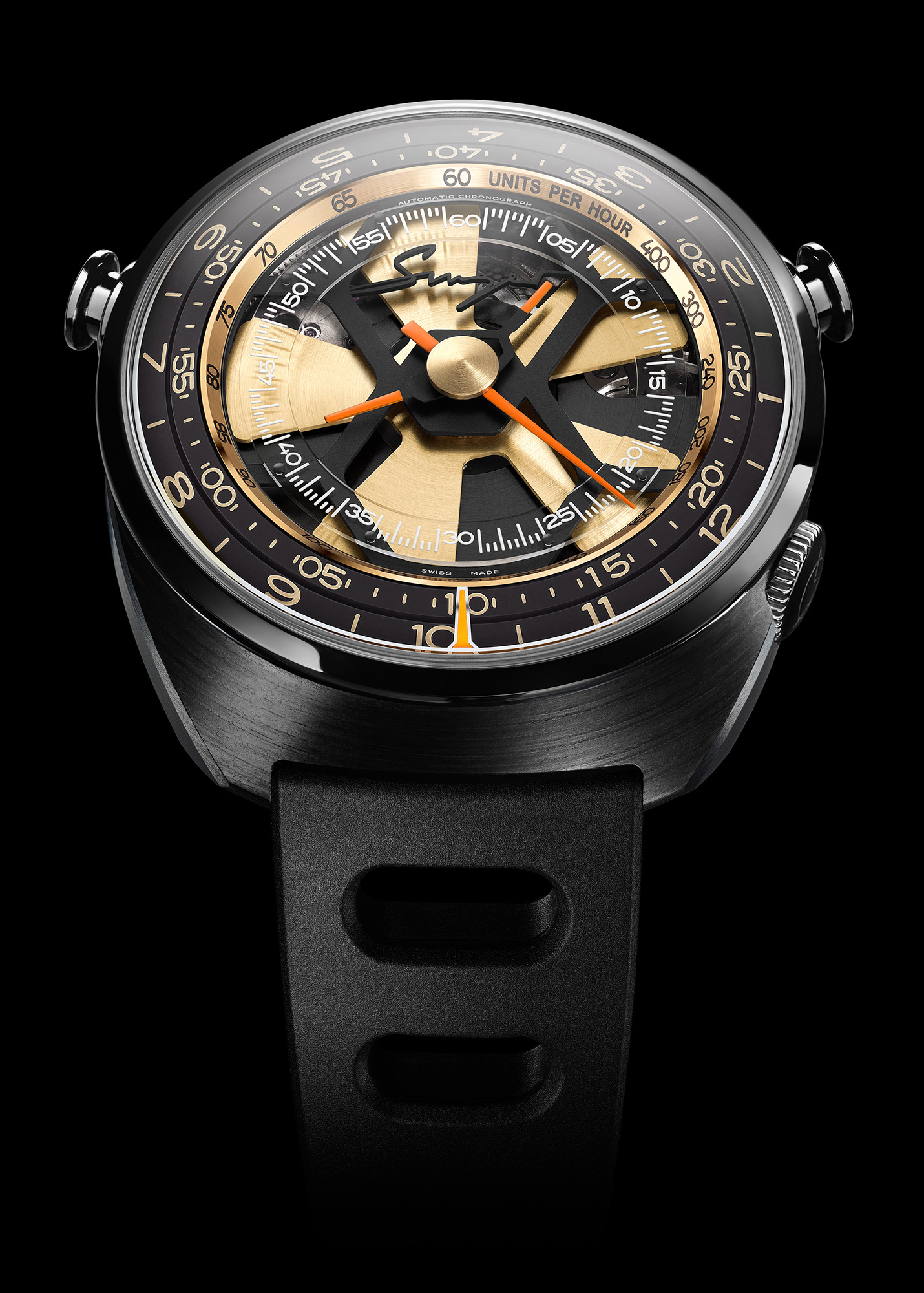