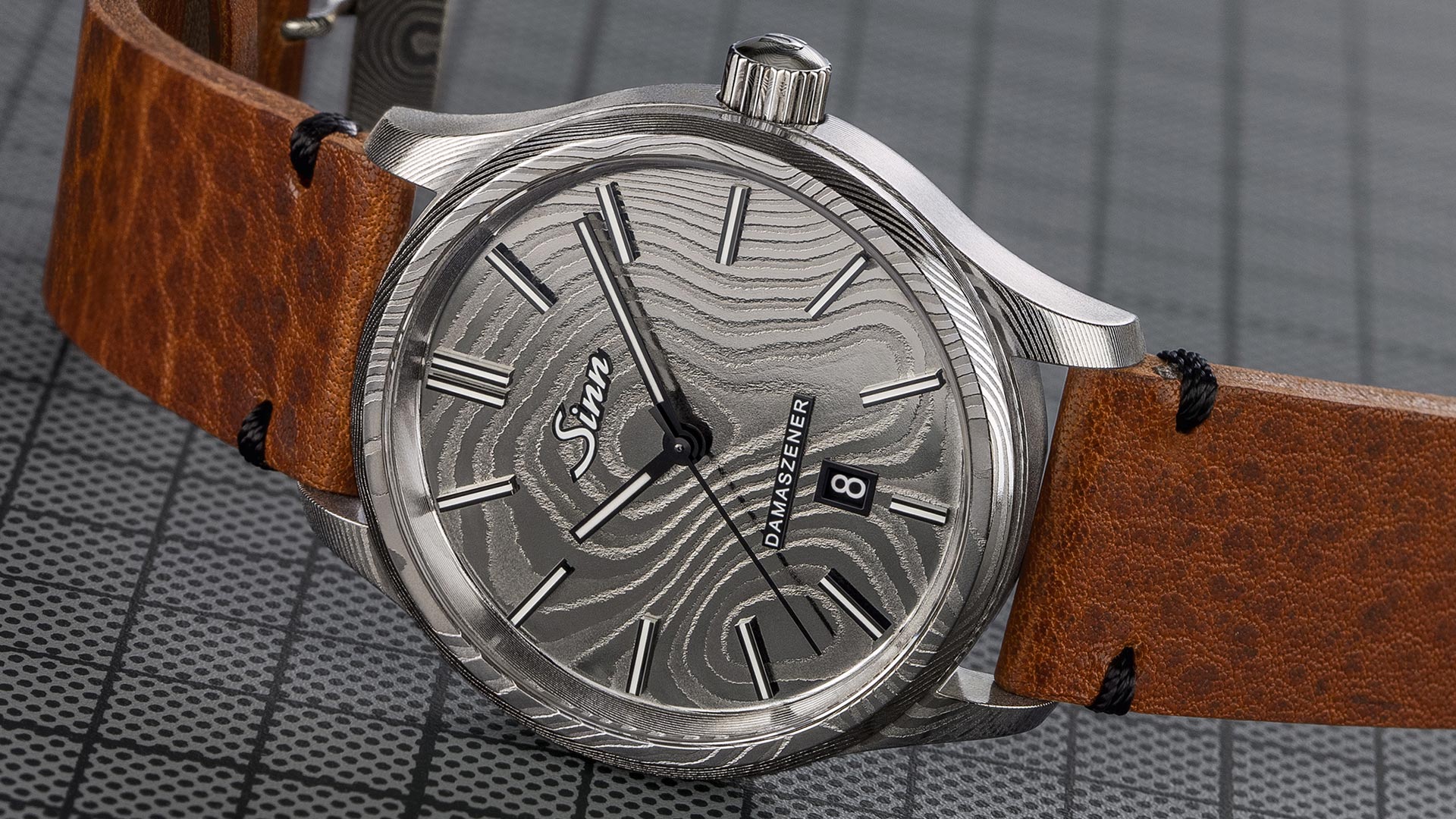 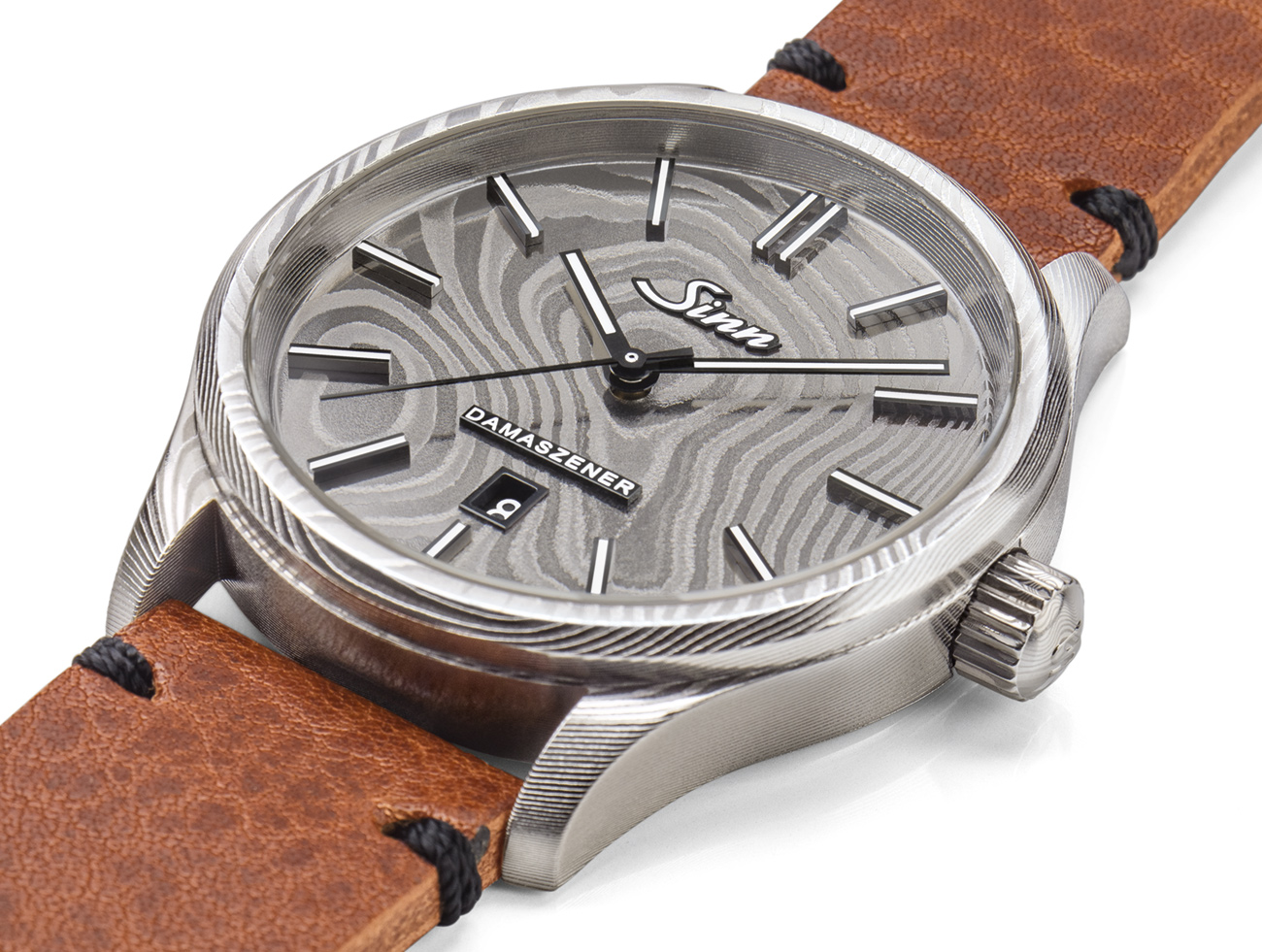 German Sinn is best-known for function-focused tool watches, but the new Sinn 1800 Damaszener watch announced today shows another side of the brand. The organic pattern of Damascus steel that runs across its dial and continues through the case merges an otherwise straightforward design with an interesting and uncontrovertibly cool material. Sinn’s second limited-edition all-Damascus steel watch, this version has a bare steel finish, and the resulting watch’s look is striking – if quite unusual for Sinn. 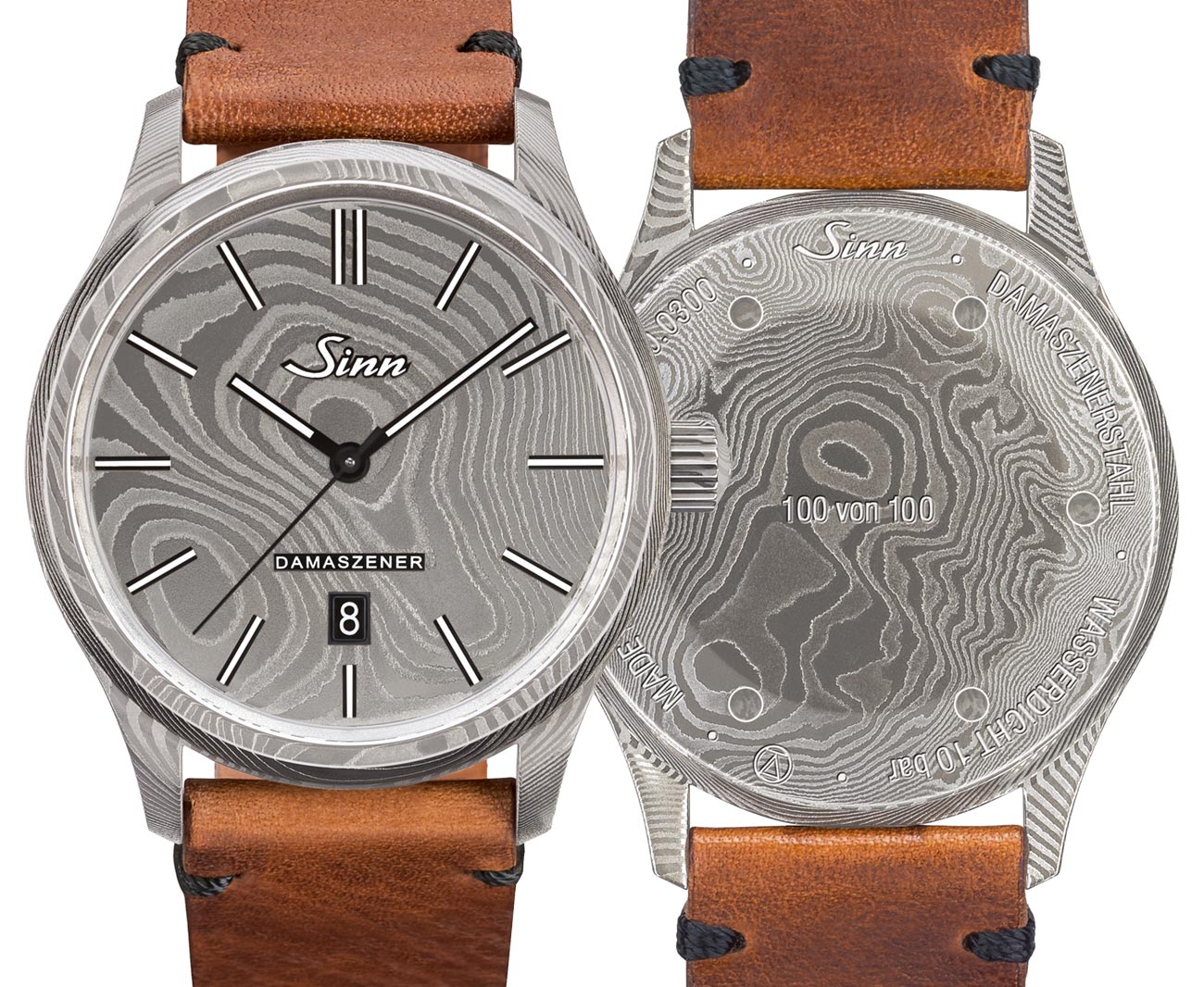 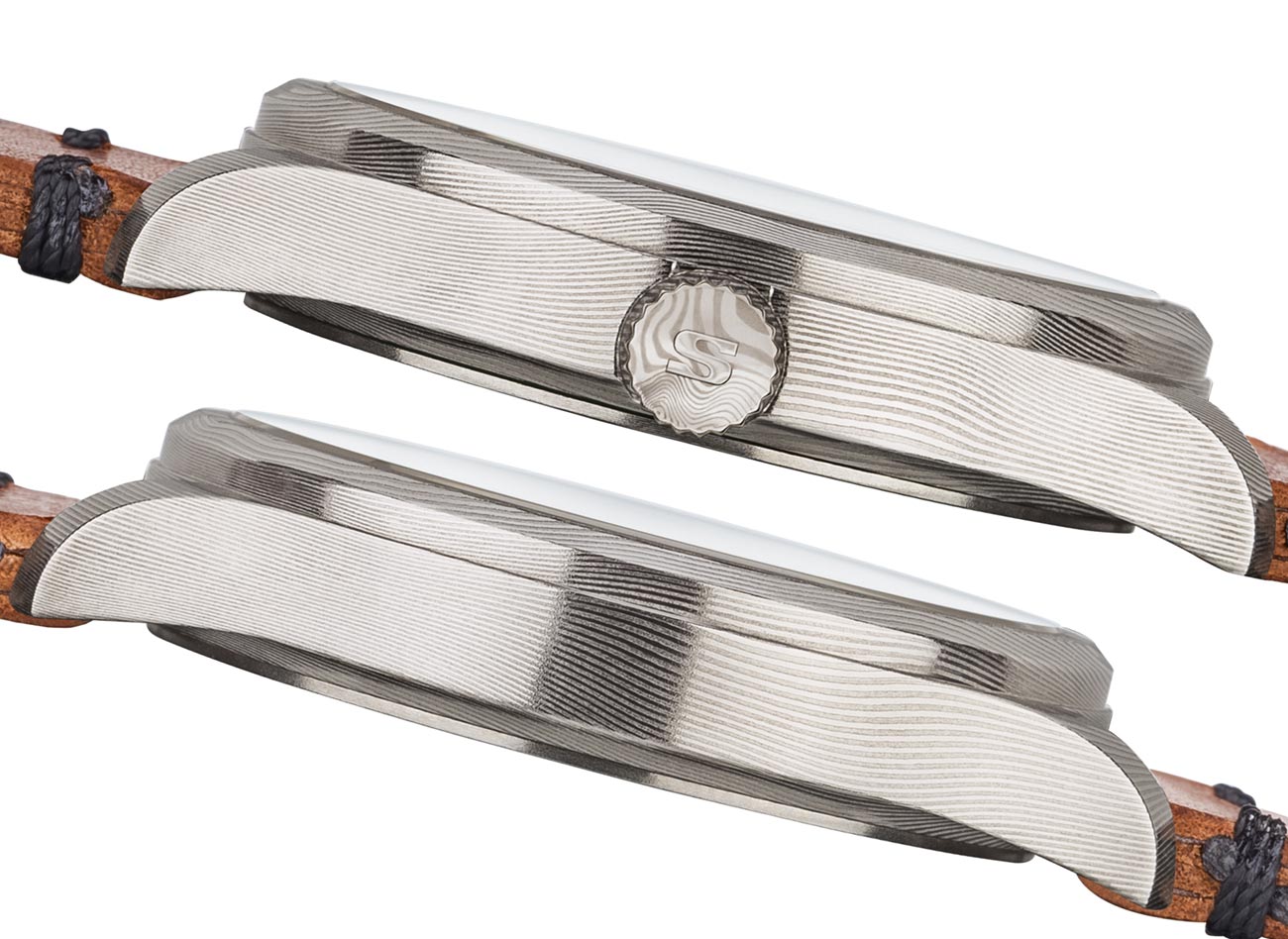 The Sinn 1800 Damaszener follows the Sinn 1800 S Damaszener watch that we saw hands-on here in 2016. The new Damaszener lacks the “S” in the name as well as the black coating of its predecessor, but the design and concept are otherwise very much the same. The case is an ample 43mm wide and water-resistant to 100m, running an ETA 2892-A2 Swiss automatic movement (4Hz, about 42-hour power reserve) inside, while the lumed indices and other applied elements on the dial retain legibility and give it a sense of depth. The novelty of Damascus steel, however, with its unique texture, technical interest, and even its cool history, is the focus of the Sinn 1800 Damaszener watch. 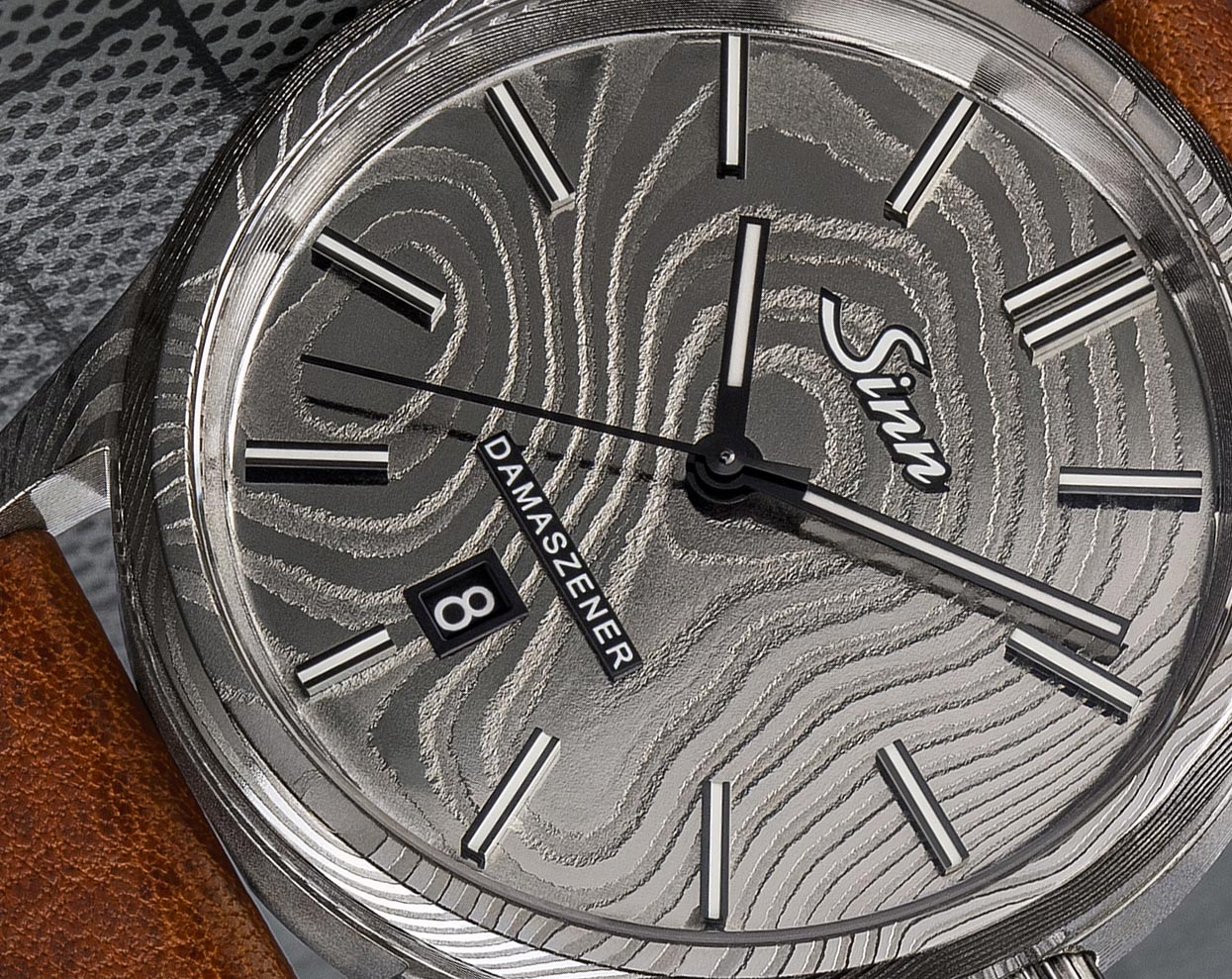 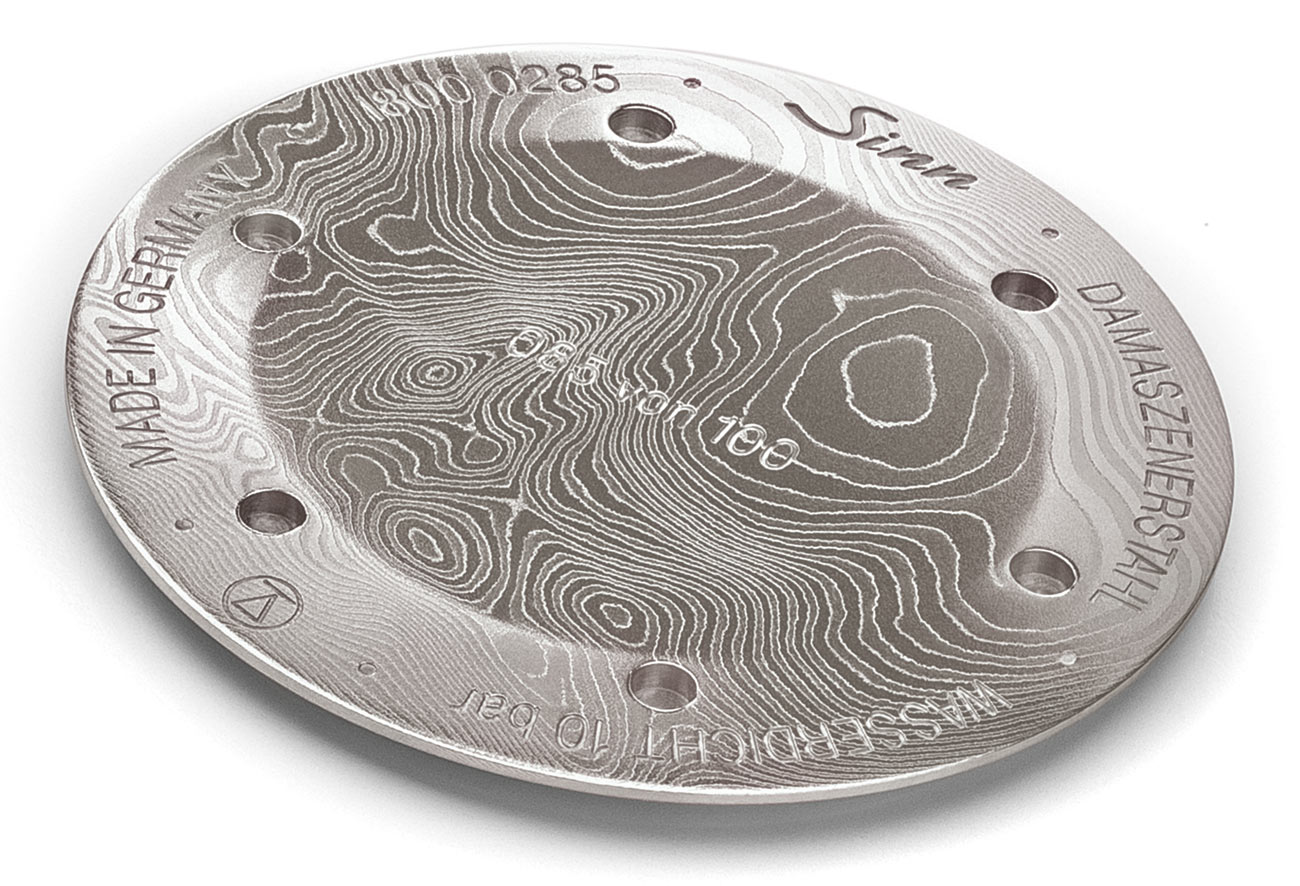 Damascus steel is the result of different kinds of steel being layered, “forge-welded,” folded upon themselves, and the process repeated. The surface is then etched, meaning treated with acid, to which the varying hardness of the types of steel reacts differently, in order to emphasize the patterns. Well, I believe that is the basic idea anyway, and Sinn tells us that for the Sinn 1800 Damaszener, different kinds of high-grade stainless steels were used. Even cooler is that Damascus steel has a history, particularly well-known for its use in blades, going back around 2,000 years. 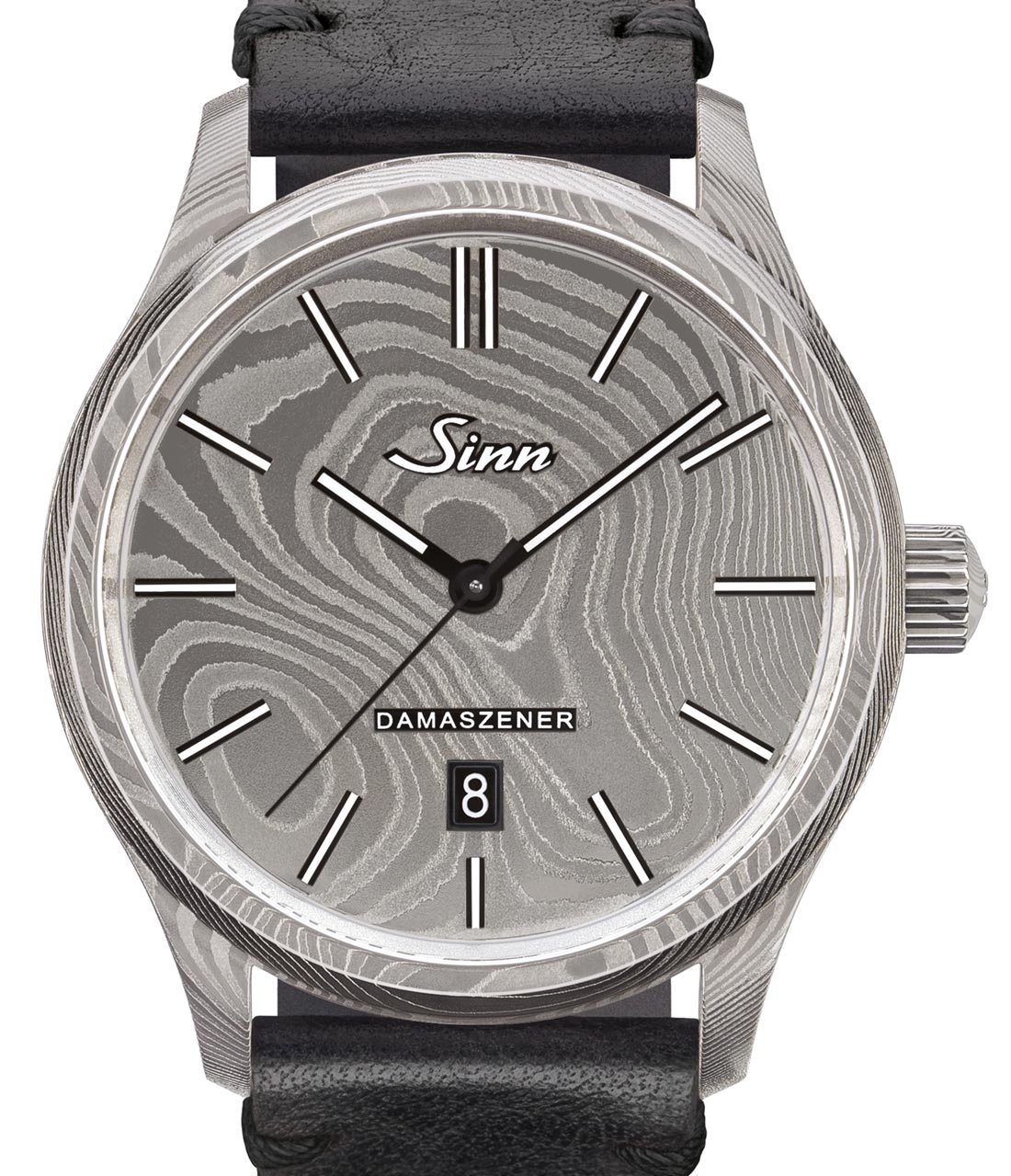 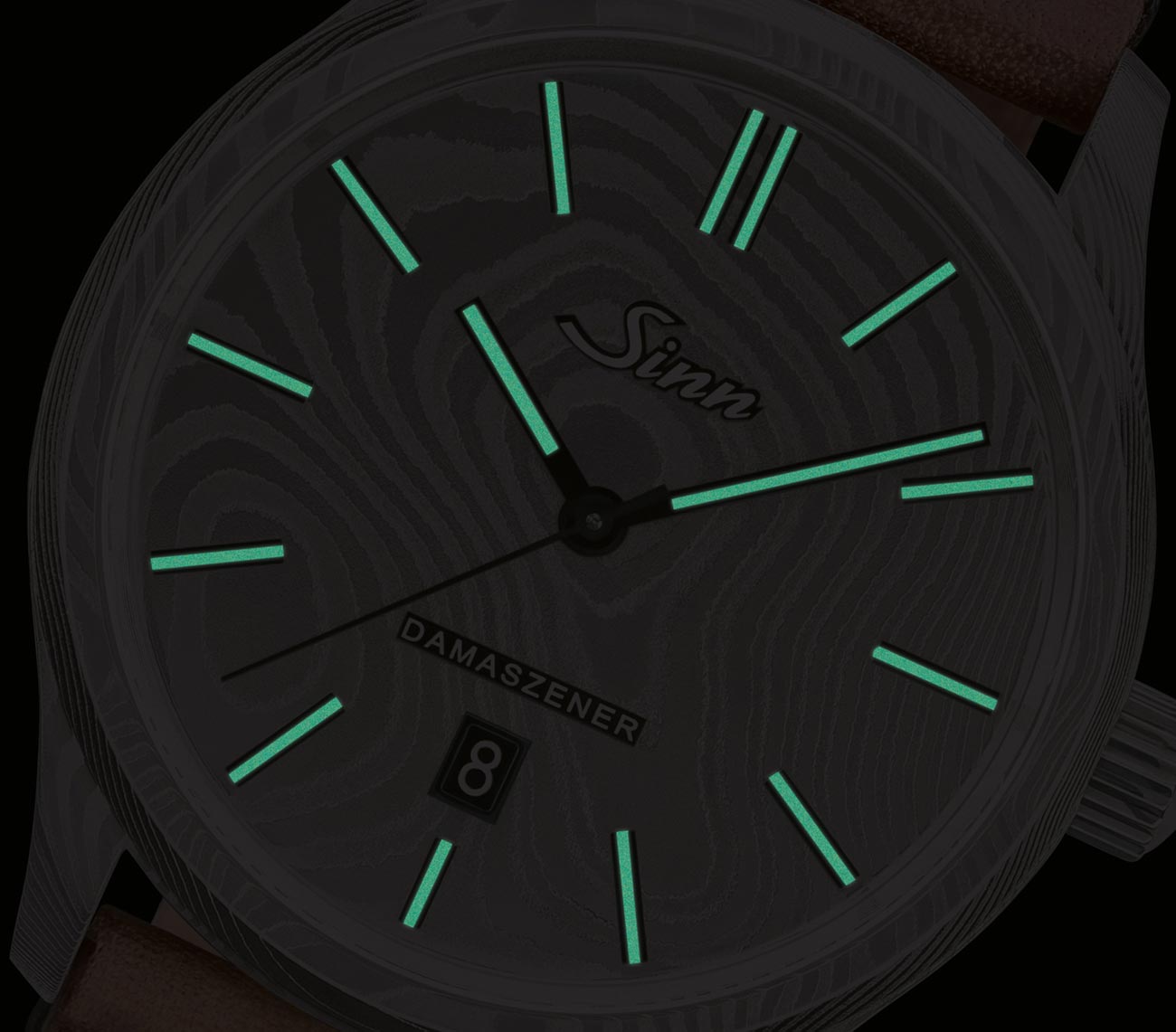 Of course, its striking pattern is the whole purpose of creating Damascus steel – I do not believe it has practical benefits over other types of modern steel, but historically it was apparently believed to be unusually hard and sharp. Sinn has treated it here with its tegiment hardening process for greater scratch-resistance as it does for many of its watches. Sinn works with German Damascus steel specialists Balbach Damast for the Sinn 1800 Damaszener, making the case and dial for each watch out of the same single block so that the patterns match up. The success of the resulting aesthetic will come down to a matter of taste, but this does help the whole design and production feel more cohesive than the many instances in which such components are sourced and then assembled piecemeal. 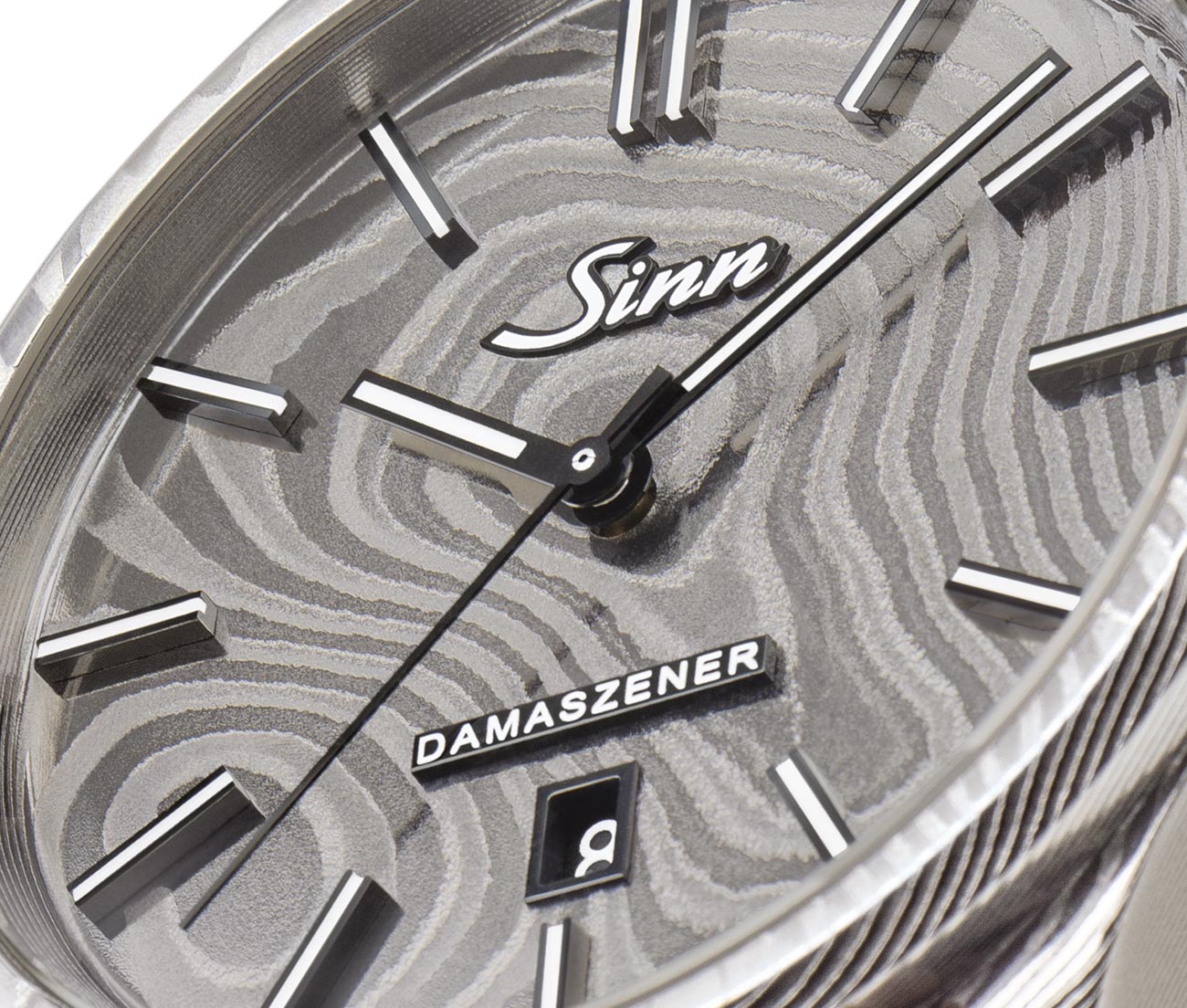 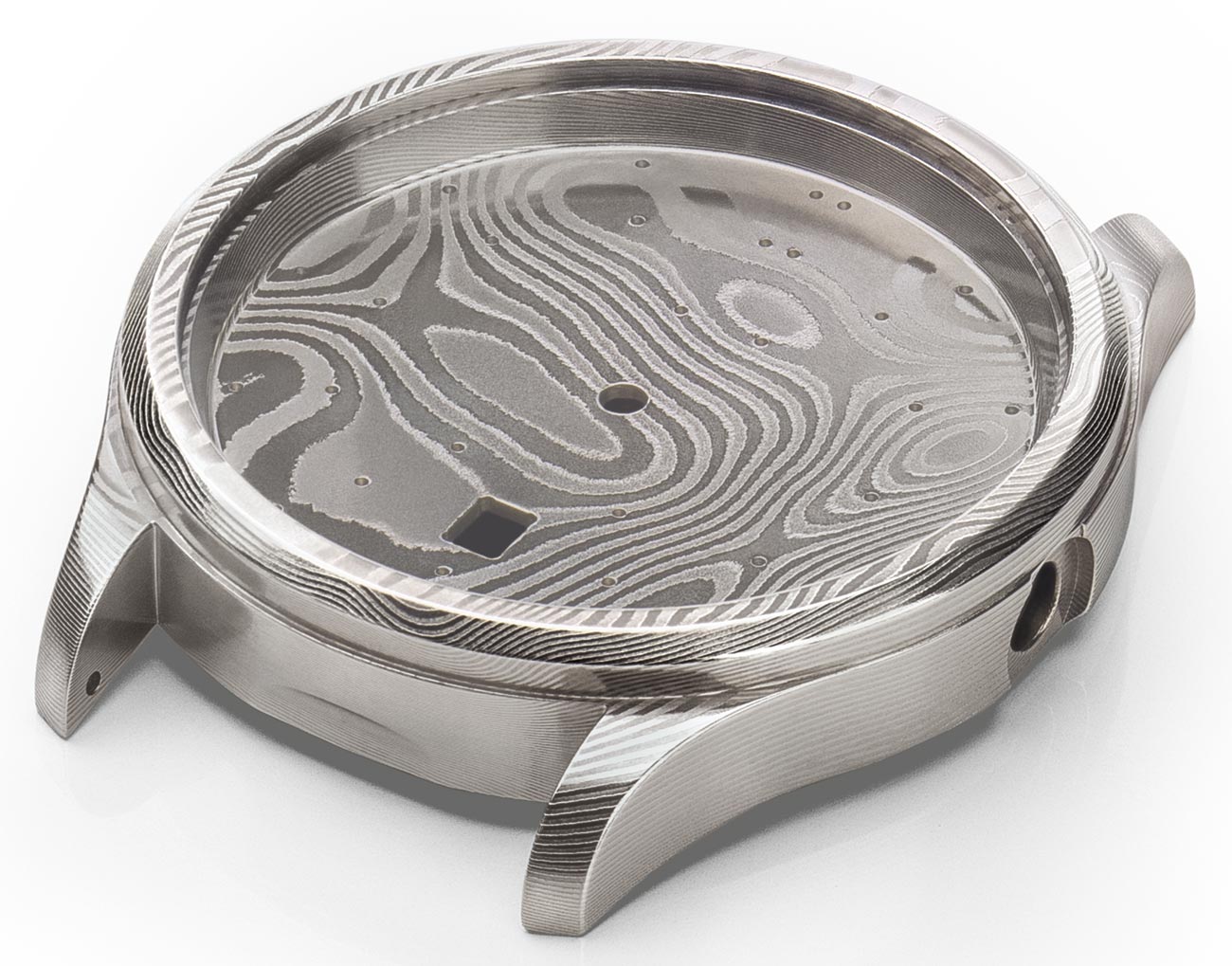 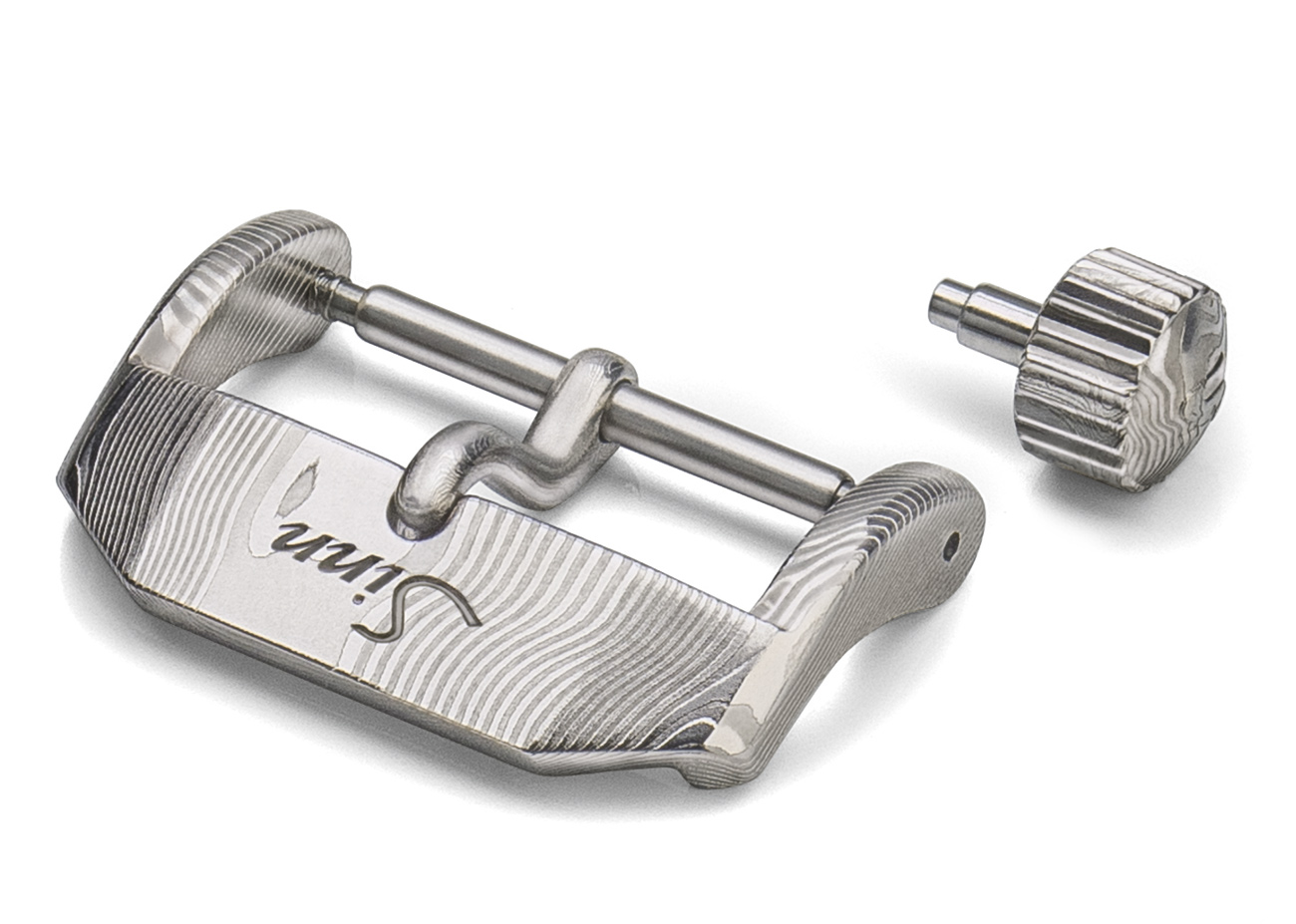 Based on the brand’s provided images, the watch should make for a pretty bold look. It’s possible that the texture may be more subtle like a wood grain when seen in person – or it might look like a 43mm zebra-stripe-patterned watch, which could be considered flamboyant. This type of patterning is not that uncommon these days, with some carbon materials offering a similar appearance, but most choose either the dial or the case. It’s cool, in my opinion, that Sinn decided to go all-in with Damascus for both the dial and the case. Just the dial in Damascus, for instance, might have emphasized its texture more, but the whole watch traversed by steel ribbons makes for something pretty unique. 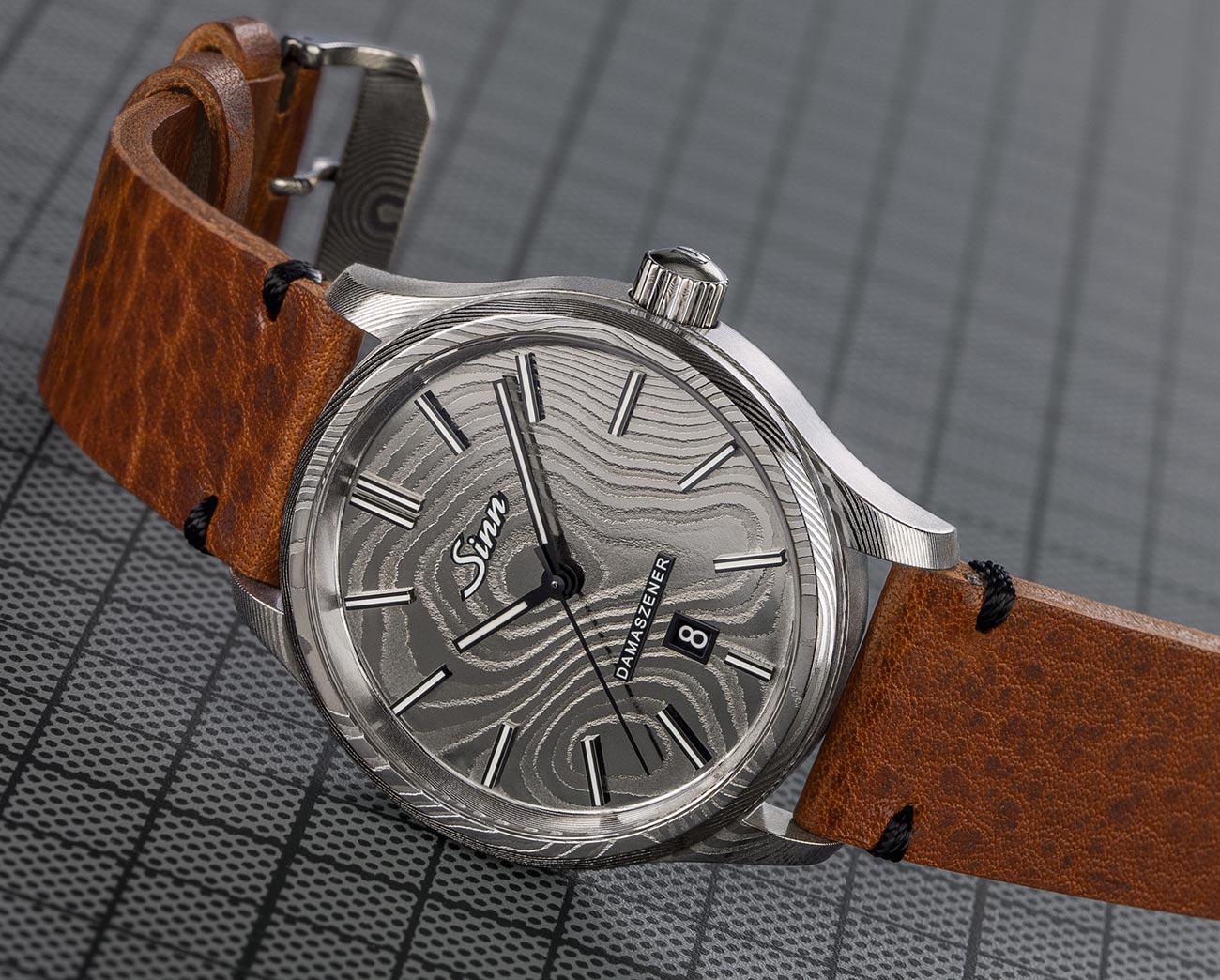 We should note, as well, that the caseback, crown, and even the buckle of the included leather straps are made of Damascus steel. Damascus steel used in watches is still pretty rare but not unheard of, with brands like Gustafsson & Sjögren using Damascus steel for dials, cases, and even movements. Now, if you could add a bracelet made from the same Damascus steel block as the case and dial, I think that would be an impressive result. It is easy to imagine the wearer of something like the Sinn 1800 Damaszener being endlessly fascinated by the flowing lines, and since each one will be unique, owners will get to choose between different patterns. The Sinn 1800 Damaszener is limited to 100 pieces and will have a retail price of $8,580. Visit sinn.de to learn more.