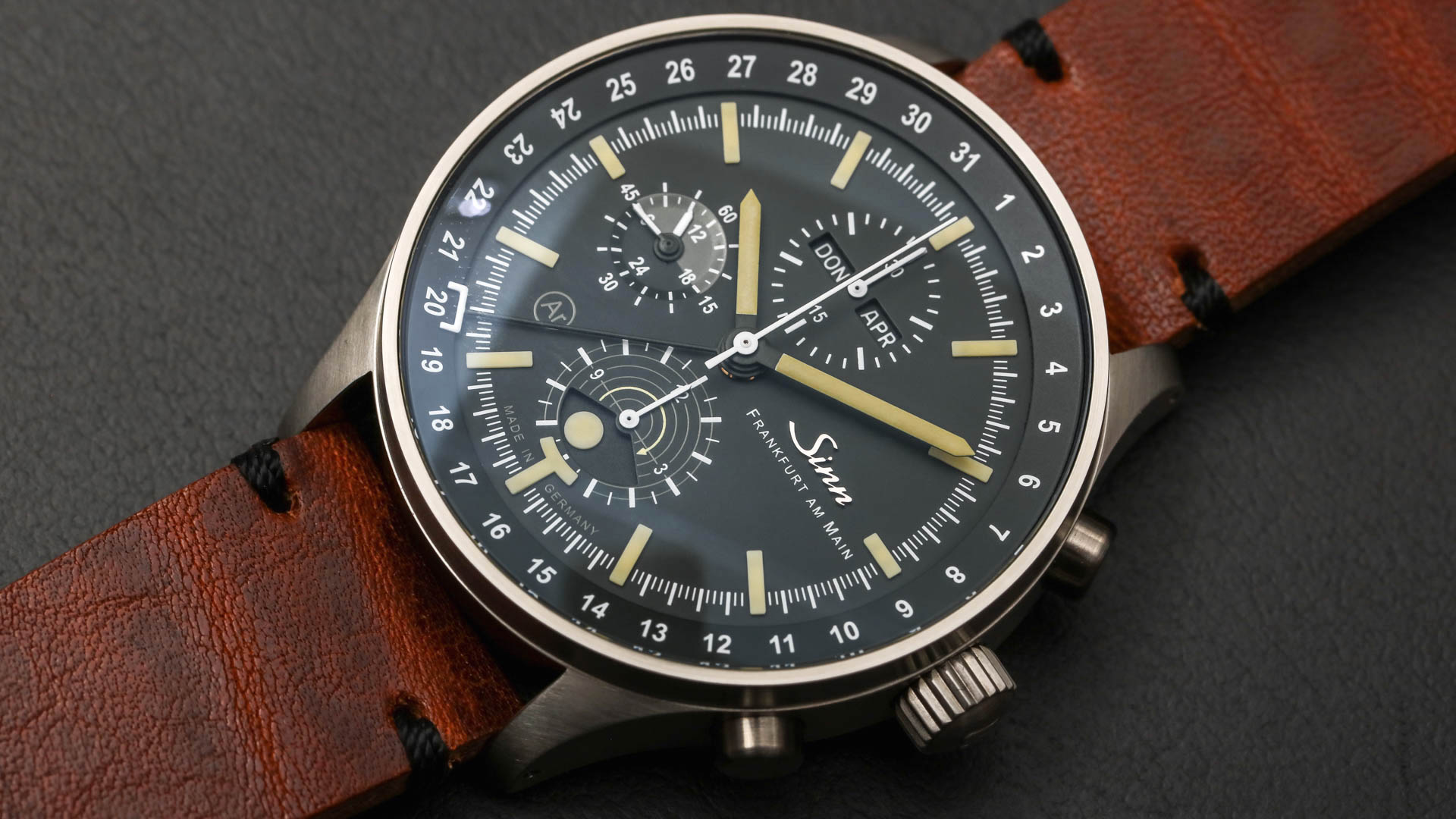 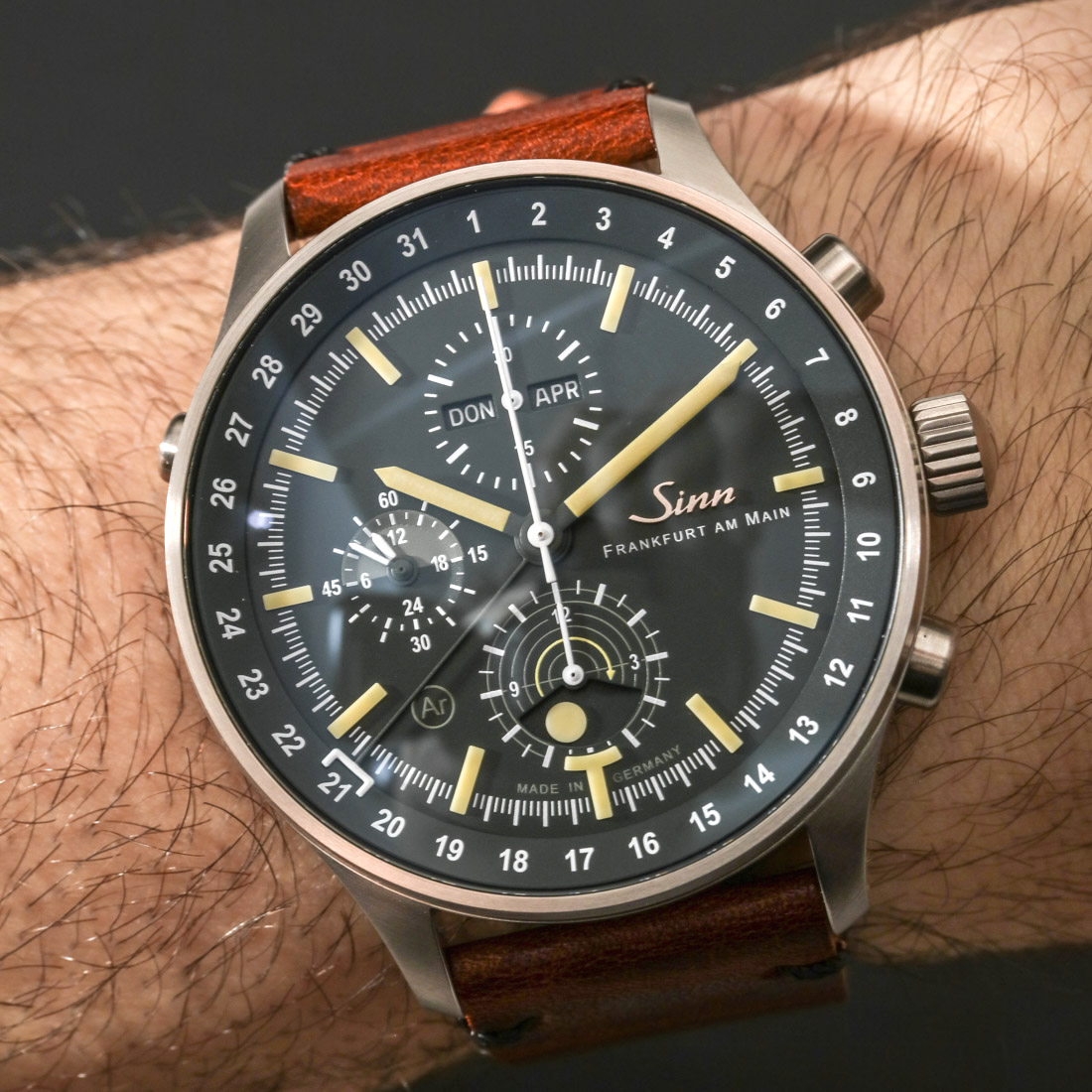 The concept of a hunting-themed watch could potentially go in a number of directions, but it is no surprise that German Sinn has built something that one can imagine being worn while actually crouching in the brush. The Sinn Hunting Watch 3006 not only looks the part with its woodsy-green dial but goes a bit further with complications and displays with purported specific use to hunters. Further appropriate to the theme, it incorporates some of the durability features and tech that have helped Sinn gain the reputation as a maker of “tool watches” — but none of that should stop non-hunters from appreciating a tough chronograph watch with a cool green dial just for its own sake. 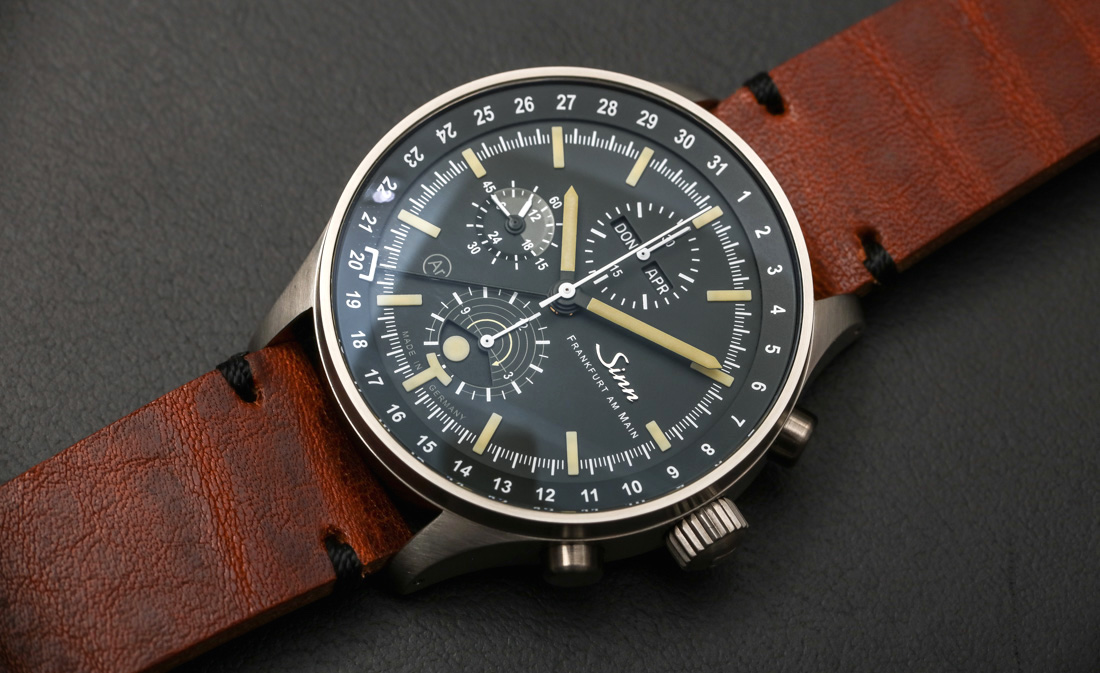 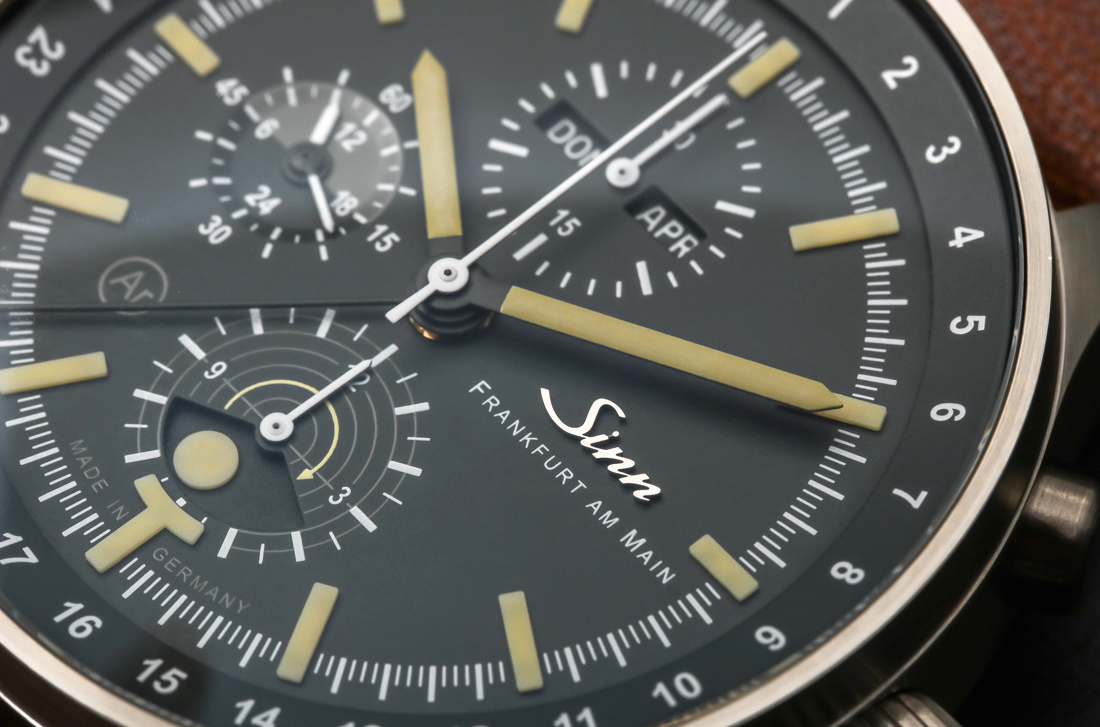 Sinn started something of a hunting watch or Jagduhr tradition in 2012 with their Sinn Paul Parey Limited Edition based on the Sinn 756 chronograph. Green dials tie each of these editions together, but the Sinn Hunting Watch 3006, first introduced here, goes a step further as more than a green-dialed version of an existing model as past hunting watches were. We’ll come back to the Sinn Hunting Watch 3006’s specific features, but suffice it to say that you can’t simply buy this watch with a black dial (currently). It is cool to see these special editions given more thought and attention. 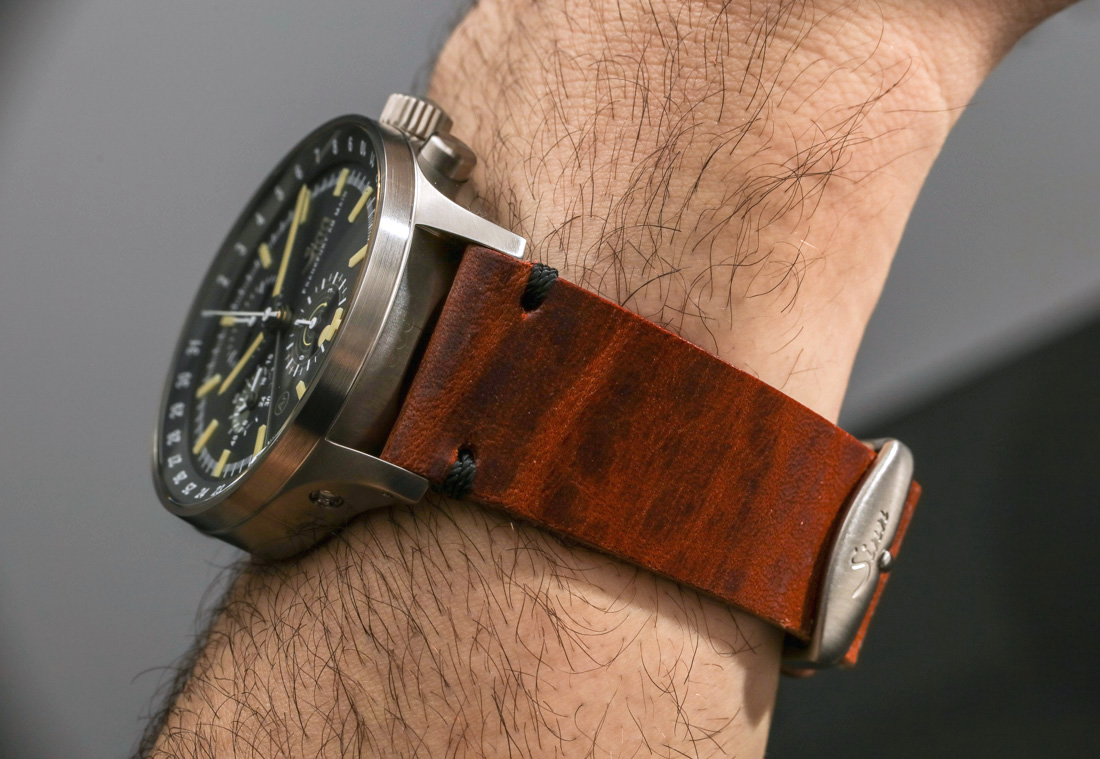 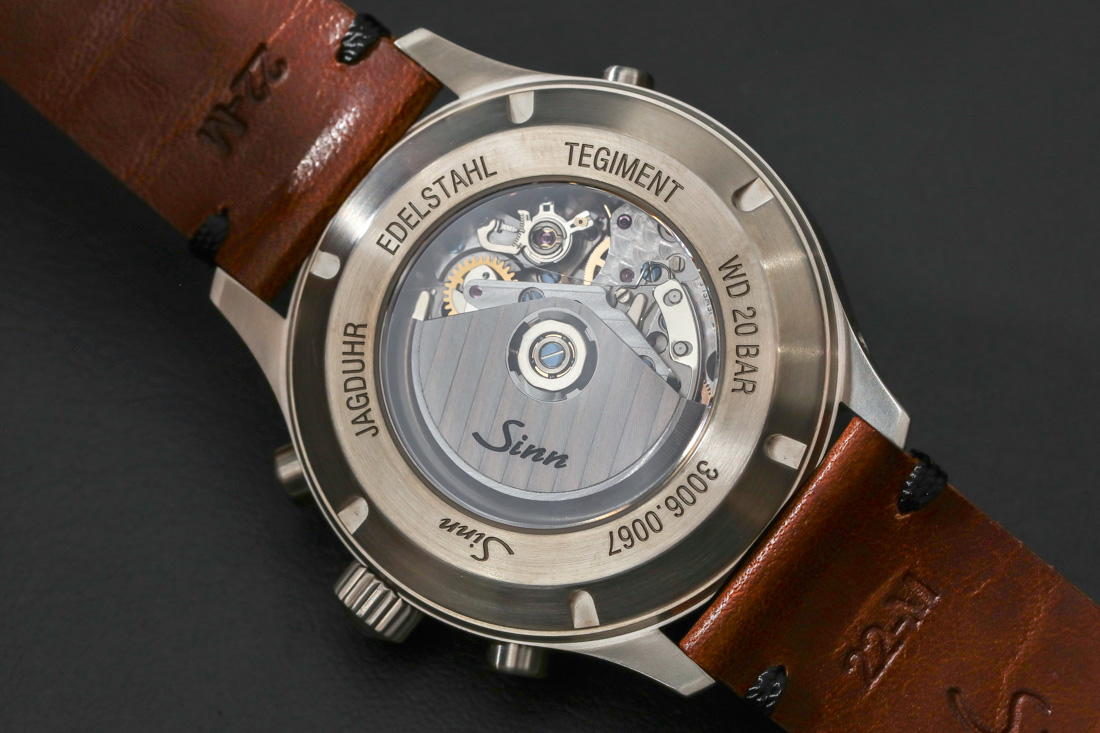 Green can be a marvelous color for watch dials, but like almost any color, its look will vary widely depending on exact shade, finishing, and lighting situations. For the Sinn Hunting Watch 3006, the brand calls the dial color, simply, “dark green,” but some might also call it forrest, hunter, army, olive, pine, etc., and that might change in different lights. In our hands-on pictures, it basically looks black or dark gray. While Sinn has imbued the Hunting Watch 3006 with its characteristic practicality, it is safe to say that this dial color is more for the aesthetic enjoyment of the wearer and to recall the watch’s rustic theme — rather than camouflage. 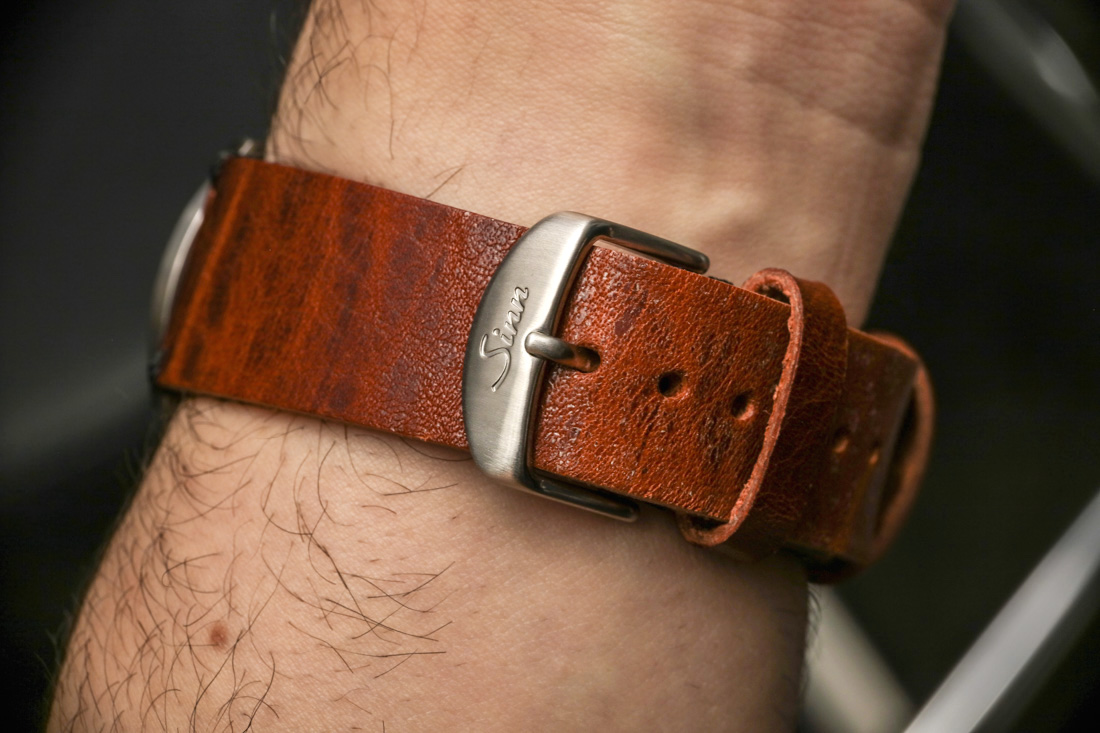 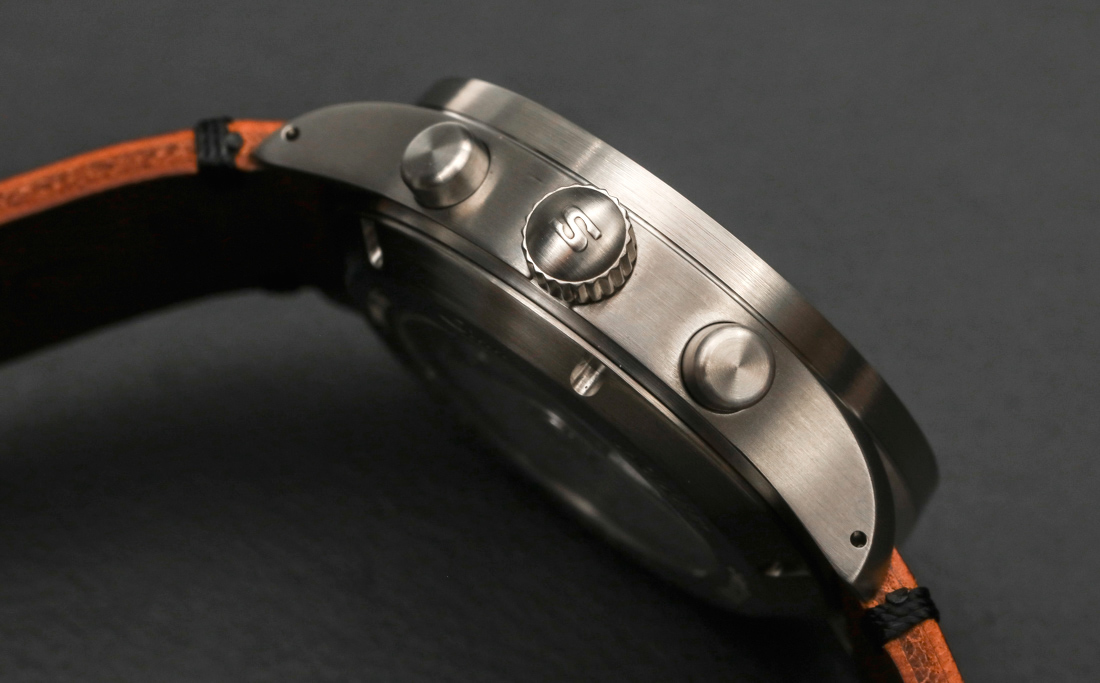 While it is probably not important for something the size of a small leaf on the wrist to help one blend into the foliage, the 44mm-wide case’s brushed finish seems practical for the watch’s stated purpose. More so, at least, than anything more polished or generally glinty. If function were truly driving design, though, dark and neutral colors with matte textures would seem to be the preference, and matte or brushed black DLC coating would be even better, in my opinion. I’ve often thought about what features would be ideal for a watch actually intended to be worn in extended wilderness situations… 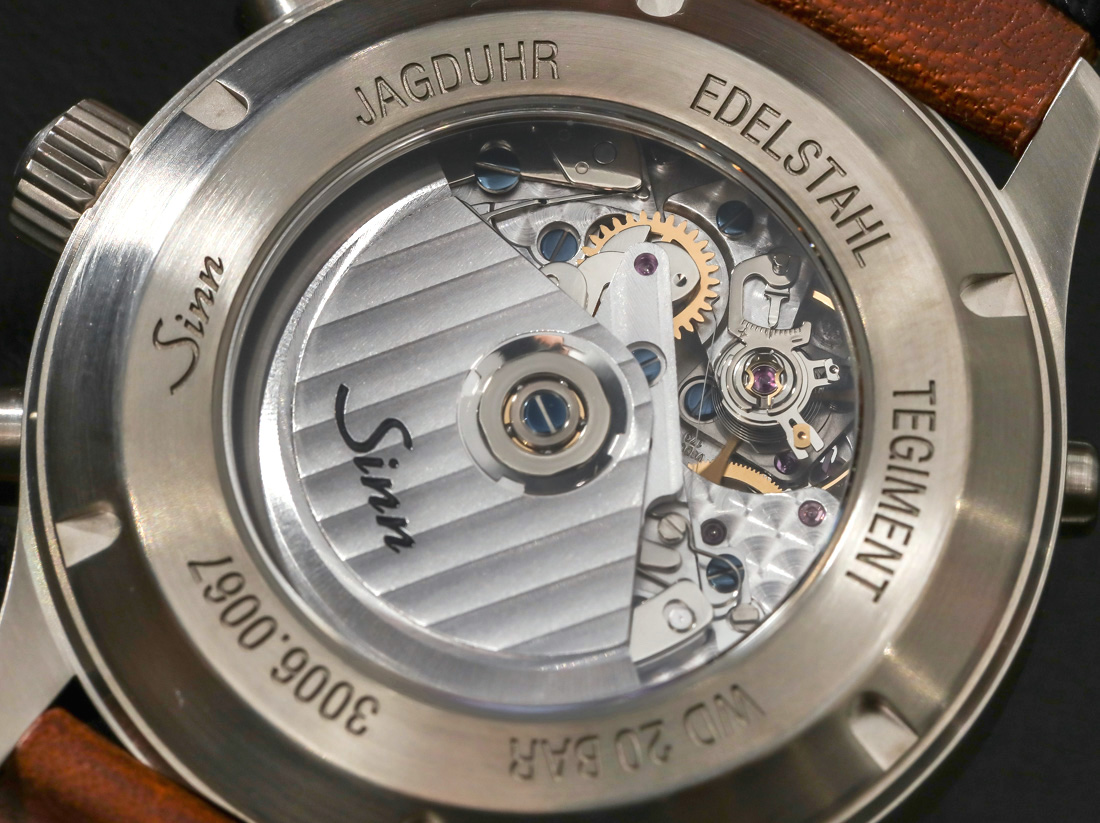 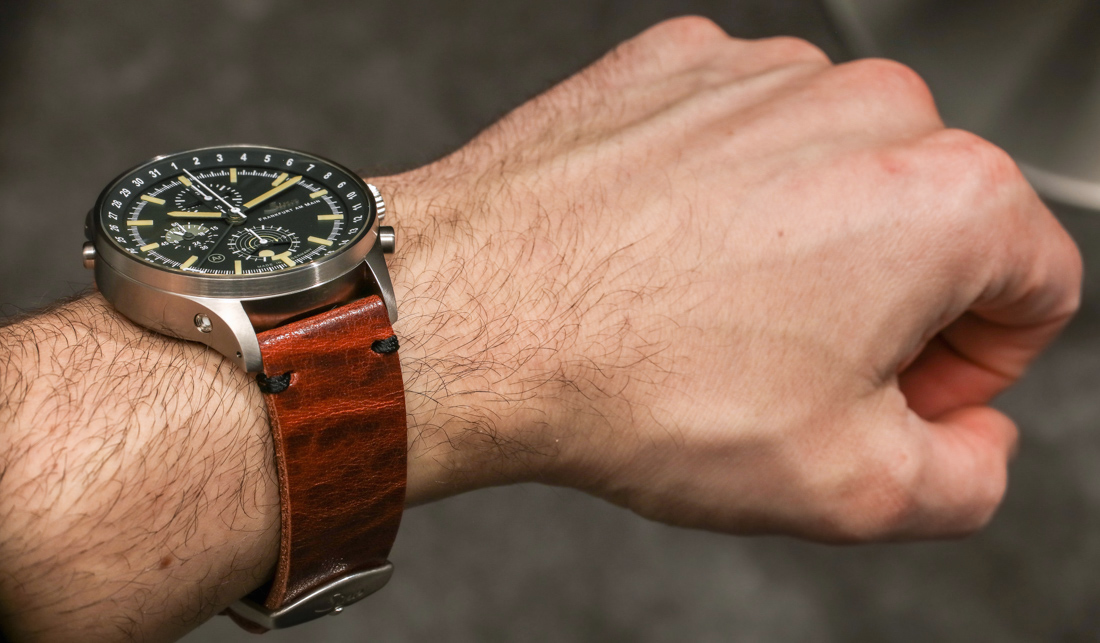 …And compactness and lightness would surely be among them. With a version of the notoriously thick ETA Valjoux 7750 movement inside, this is going to be a chunky chronograph watch at 15.5mm thick and 107g without a strap. Beating at 4Hz with a 42-hour power reserve, the 7751 automatic movement is visible through a sapphire crystal display case back with a decorated Sinn rotor. This version of the popular chronograph movement adds a number of functions, including a complete calendar, 24-hour hand, and moon phase. The date is indicated by a central hand whose stem is green to blend into the dial, which was the correct design decision, but with a white tip to frame the date. The 30-minute chronograph subdial at 12 o’clock incorporates the day and month displays, and the 9 o’clock subdial houses both the running seconds and the 24-hour hand. 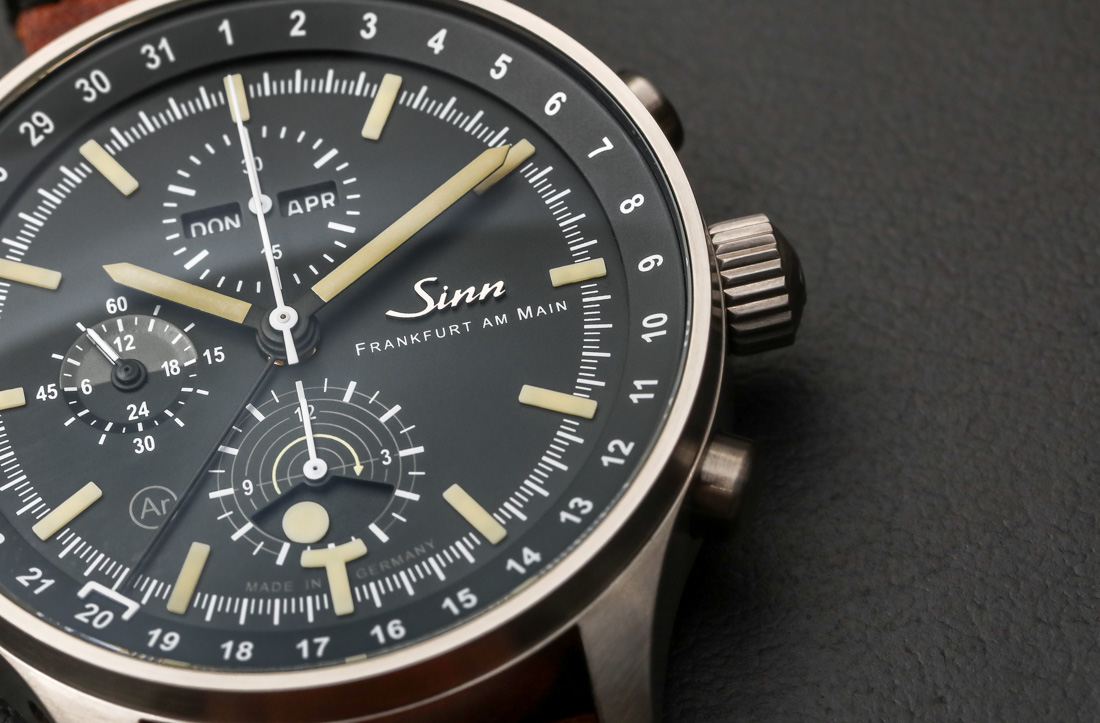 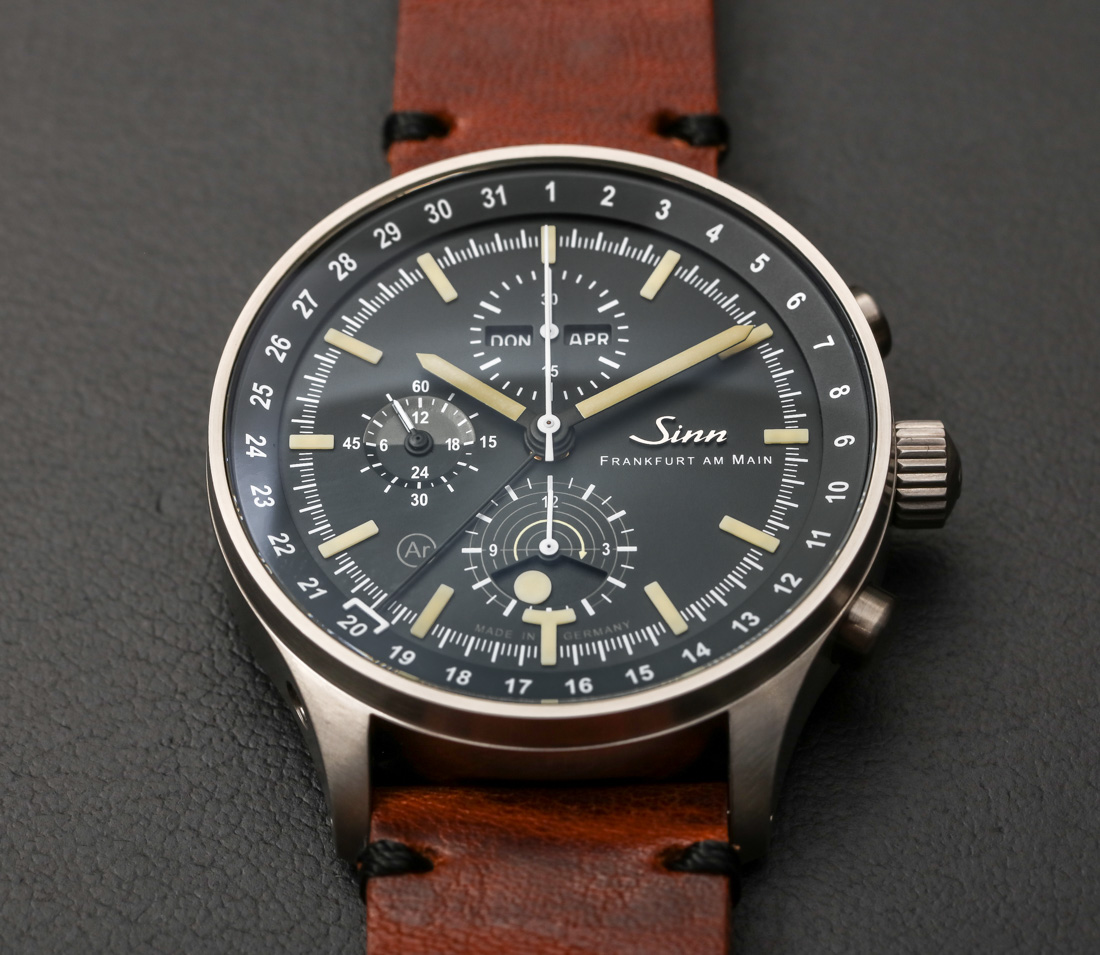 The moon phase display nestled into the 12-hour chronograph counter at 6 o’clock is the most notable quirk of the Sinn Hunting Watch 3006. Why? Because, according to Sinn, it is rather a “moonlight display” — using a moon phase complication, of course. When the lumed dot is in the open aperture, it indicates the period of three days before and after (also during, of course) a full moon when the light is considered optimal for night hunting. This is further useful and important to German hunters, Sinn tells us, because German law prohibits the use of artificial lighting sources while hunting. 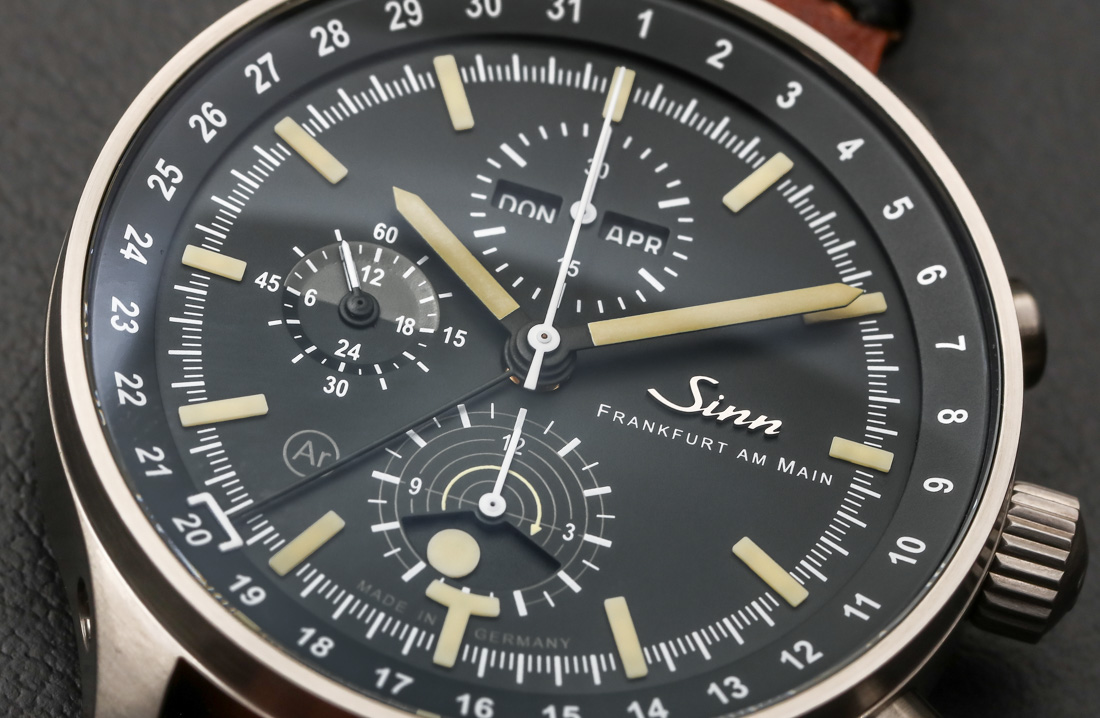 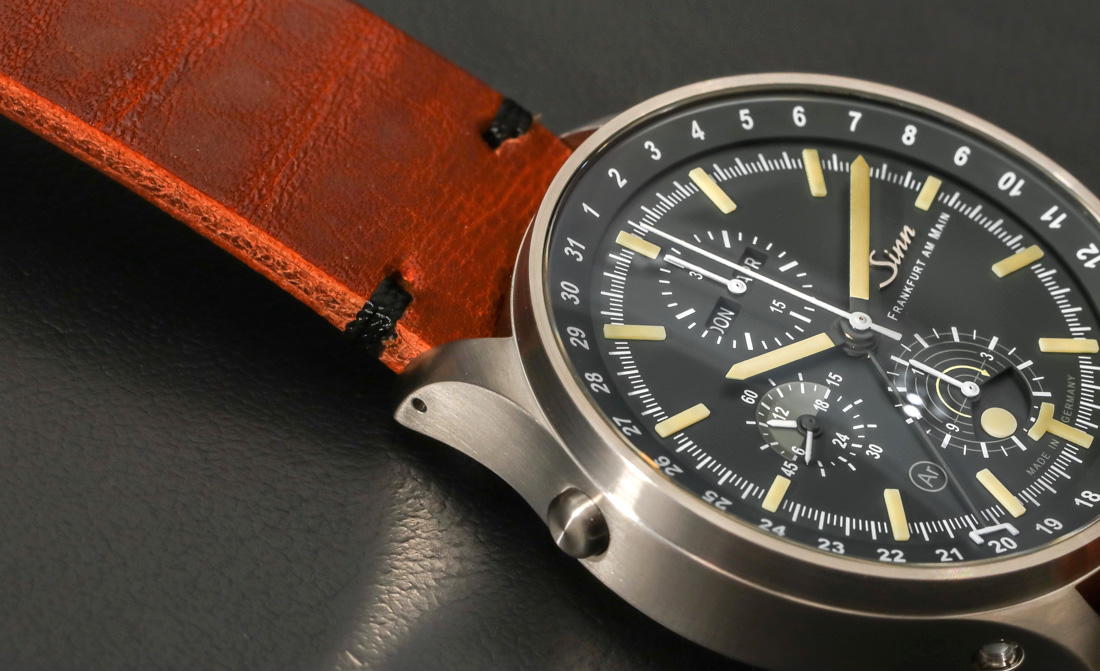 Besides the moon, the hands and markers are also fully lume-coated in a color the brand calls “ivory.” Further supporting the watch’s rugged nature are some signature Sinn technologies. The brushed steel case is treated with “Tegiment technology” to harden the steel and make it more scratch-resistant — and while that is all the more appropriate for a watch meant for roughing it, it doesn’t seem like one’s watch getting scraped up should be a major concern for outdoorsmen. I think a watch like this would look good with some telling scratches on it, actually. Then there is Sinn’s “Ar-Dehumidifying” system which is a tiny capsule inside the case that absorbs moisture and changes color when it needs to be replaced (by Sinn). Moisture anywhere in a watch is bad, but the Sinn Hunting Watch 3006 is water-resistant to 200m anyway with a screw-down crown. 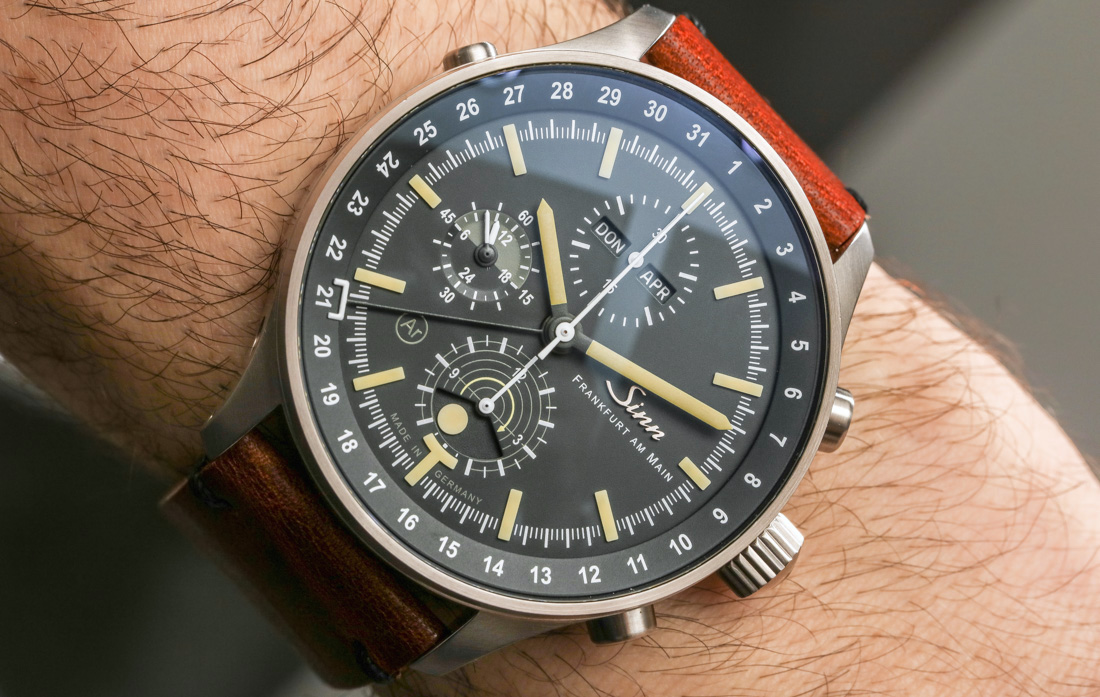 This article happens to feel timely as it is currently about peak hunting season in the area of the US where I am, and although I do not participate, it’s something I’m aware of since I know people who do. I would be very interested to know from those readers who do hunt if the Sinn Hunting Watch 3006 seems genuinely useful. Also, what watches (if any) do you currently take hunting? And what watch features would be useful or practical for the kind of hunting you do? All killing activities aside, the Sinn Hunting Watch 3006 will likely be an equally cool and attractive chronograph for other outdoor enthusiasts or even urbanites. The Sinn Hunting Watch 3006 pricing starts at $3,970 on the leather strap as shown here, and you can learn more on sinn.de