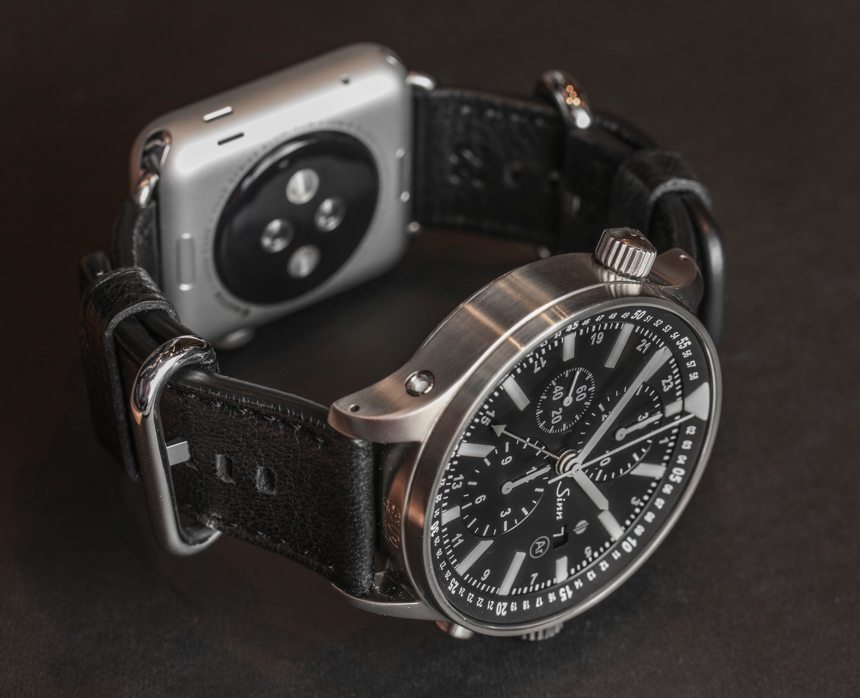 German Sinn is nothing if not practically minded. Best-known for their hearty, down-to-earth tool watches, fans of the brand may not have seen this coming, though. If it’s not immediately clear from the pictures and title, the Sinn Dual Strap System is a pair of strap halves for your Sinn watch and a pair of strap halves for an Apple Watch, which together make a whole wrist experience. Or, perhaps the ability to enjoy both a mechanical watch and an Apple Watch together on one wrist is even greater than the sum of its parts. We got to see it hands-on at Baselworld 2016. 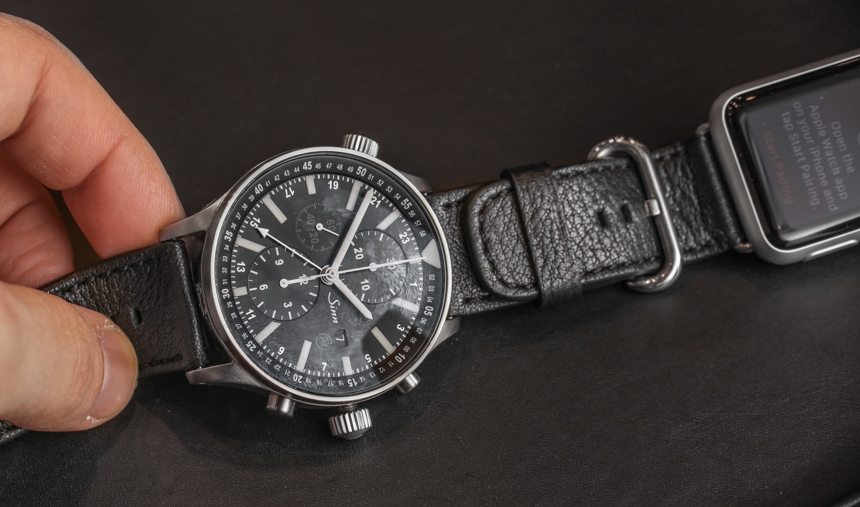 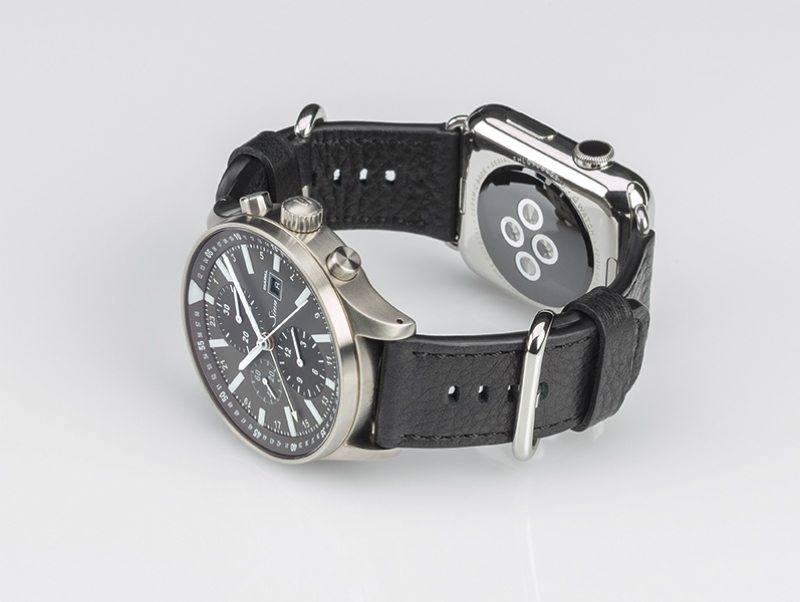 Adapting to a potential smartwatch world is the watch industry’s existential question of the moment, and the only answer for traditional watches is how to coexist in harmony. And we have written more than a little bit on the topic here on aBlogtoWatch. We are, in fact, quite fascinated to witness the multitude of ways brands react, innovate, or even try to redefine or reclaim the “smartwatch” term – some responses being more clever than others. Along with mechanical-smartwatch hybrid concepts like Kairos, or strap-attachment modules for notifications like the Montblanc e-Strap, we have also seen this concept of a mechanical watch on one side of the wrist and Apple Watch on the other in the rather overpriced solution, the Nico Gerard Pinnacle. 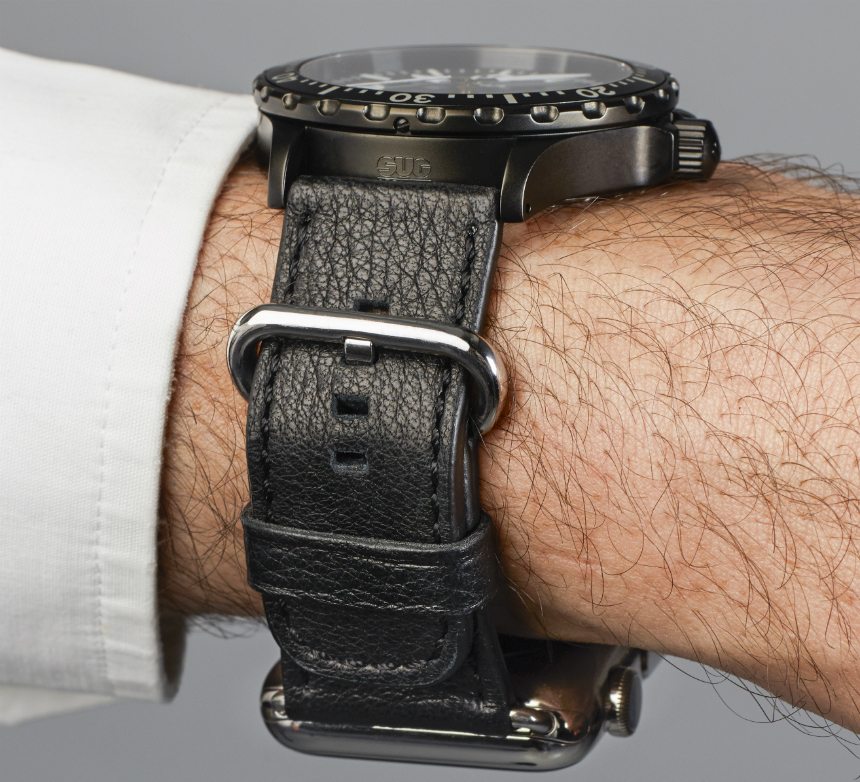 There is, however, yet to emerge a single definitive solution to enjoy the best of both worlds. For the most part, it still comes down to: double-wrist it, or choose. Sinn’s answer is simple and does not seem to be reaching too far from what they are good at – and at the same time, the brand can show they are at least aware of the looming smart watch specter, and at least doing something in response. The Sinn Dual Strap System is a characteristically clever and sensible solution, and not a huge commitment either on the part of the brand or on the part of curious buyers. 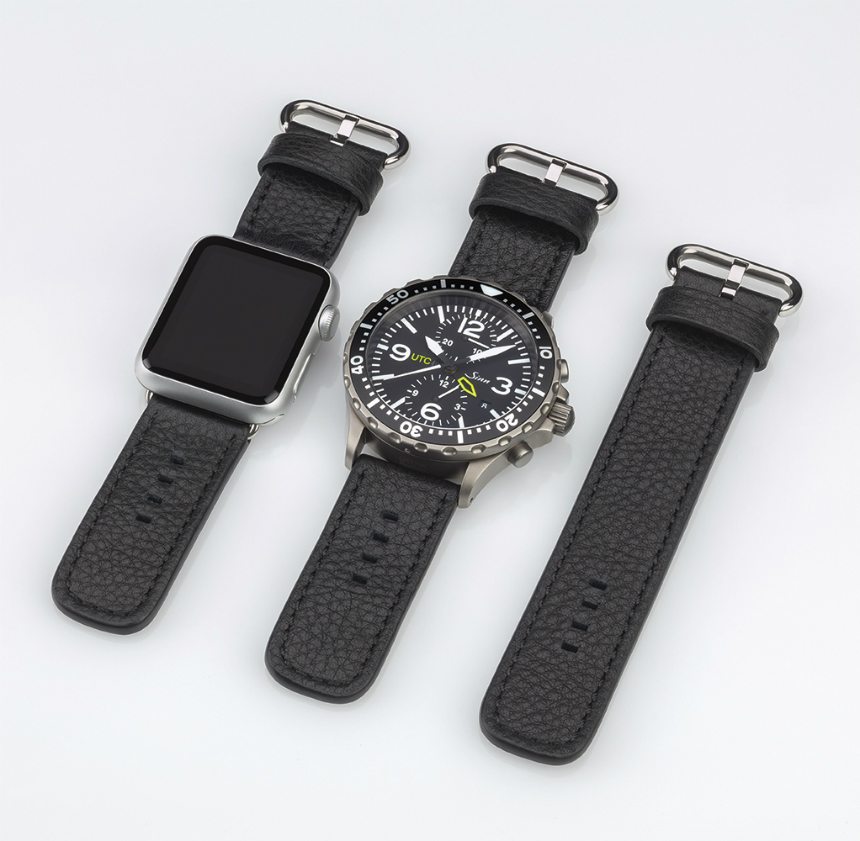 The “system” involves not only the amusingly stubby half-straps, but also a plain “connecting strap” that allows the wearer to wear just one watch at a time. But there is only one connecting strap… forcing you, yet again, to choose! I think they should have included two connecting straps so that your wrists can match if you decide to instead wear one on each. I think it’s safe to say that people considering this Sinn Dual Strap System might also be open to the idea of double-wristing, and two connecting straps would offer the most possible versatility and options to wearers. 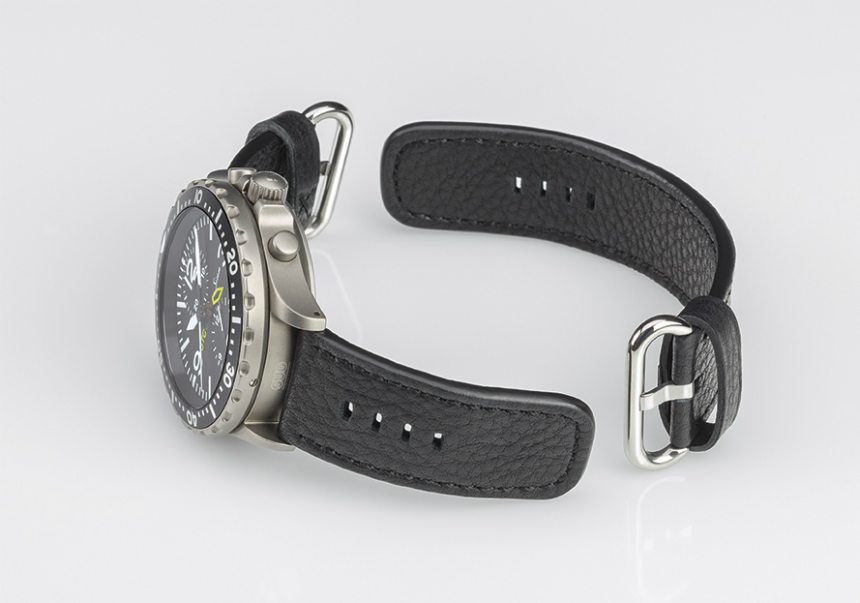 Included in the kit are extra spring bars and a strap-changing tool. Both sizes of the Apple Watch are accommodated with the Apple Watch’s strap halves, and the spring bar-equipped pair is for a 22mm lug width. So really, you could put this on any watch with the right lug size – as there is no prominent Sinn (or Apple) branding on the straps themselves. The rounded, oblong, polished steel buckles match those seen on many Apple Watch bands and at least add minimal additional on-wrist bulk. The two watches together do look to be somewhat bulky on the wrist, but fans of beefy Sinn tool watches might not mind that. 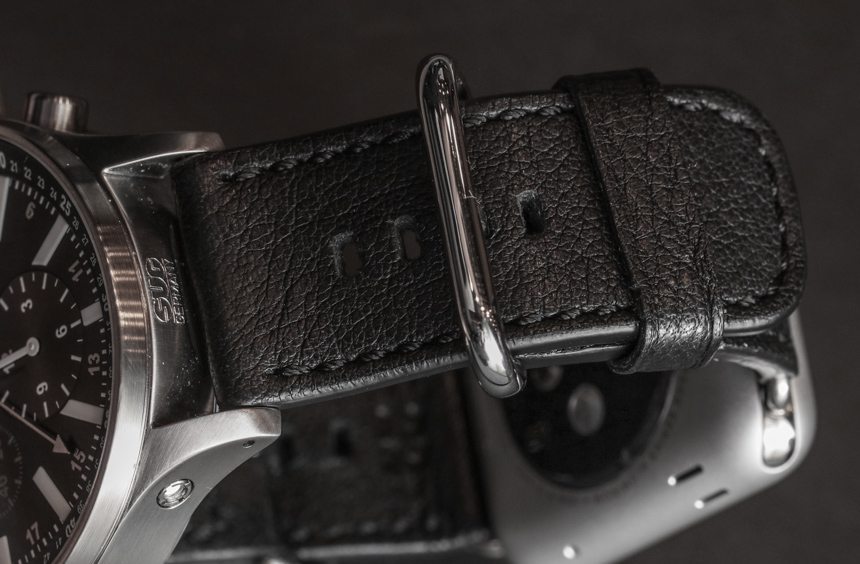 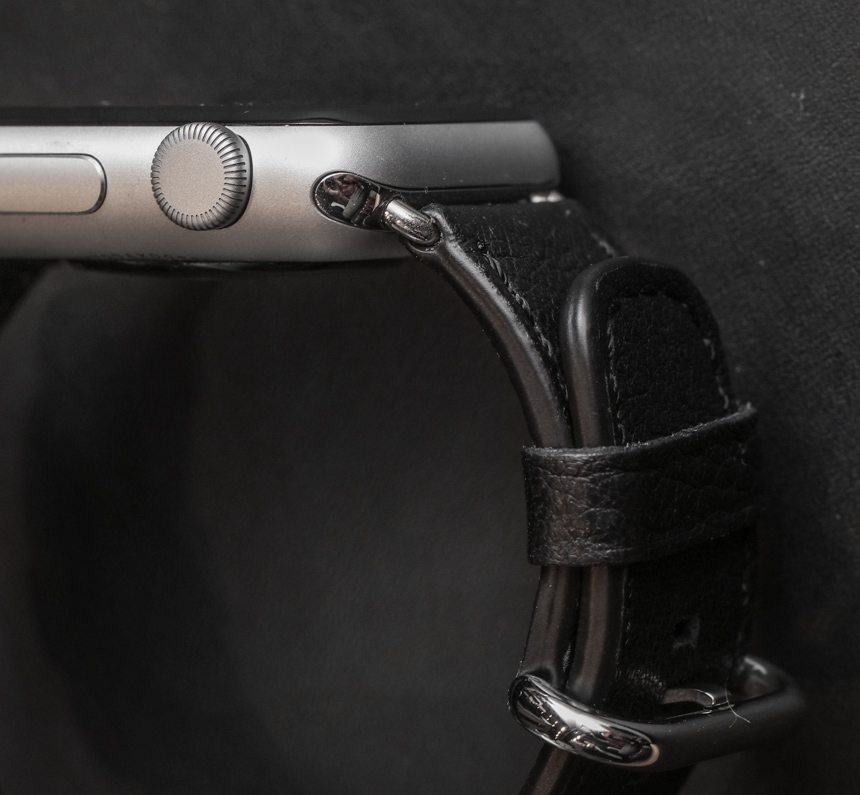 While you could choose to wear the Apple Watch on top, the idea is presumably to show off your luxury watch while sneaking peeks at all the Internet has to offer on the underside of your wrist. Not that the Apple Watch would be “hidden,” but there may be some scenarios where this kind of thing is useful or desirable – Sinn suggests: “on business trips, at conferences, or in meetings.” People who wear their cellphone on their belt seem like potential customers… 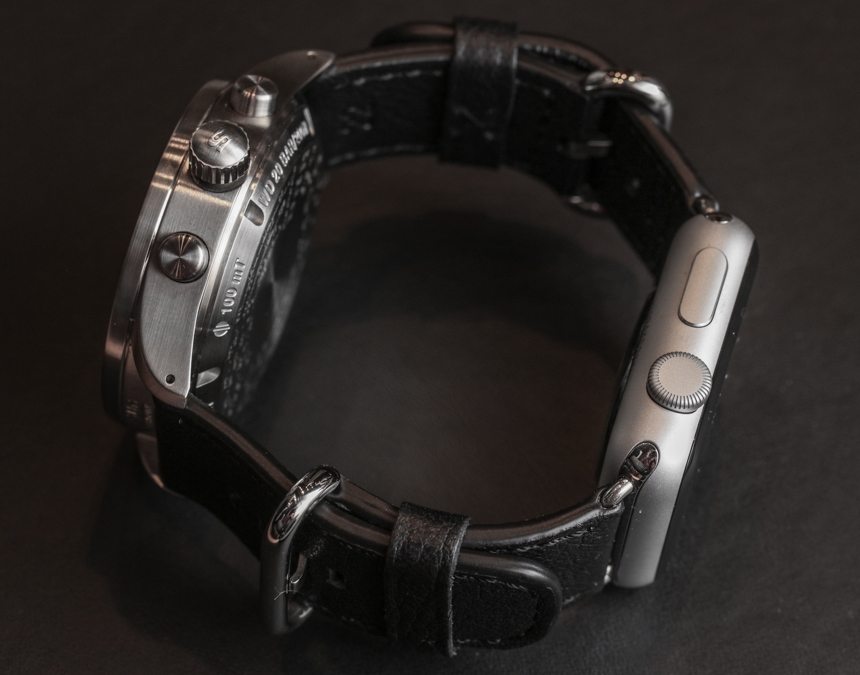 Since the battery life and autonomy from smartphones are the major current stumbling blocks for the smartwatch, there is an argument to be made that when your connected watch fails, a mechanical watch can at least keep telling you the time (and other basic information). Though, many have questioned the value of any extra convenience a smartwatch offers over a smartphone, and even the aficionado community and watch industry itself readily acknowledge that mechanical watches are practically “obsolete.” So if you want both a mechanical watch and an Apple Watch together on the same wrist, you know you are in it mostly for enjoyment, and a little bit for the convenience. Price in the US for the Sinn Dual Strap System is $120 when bought with a Sinn watch and $210 when bought separately. sinn.de