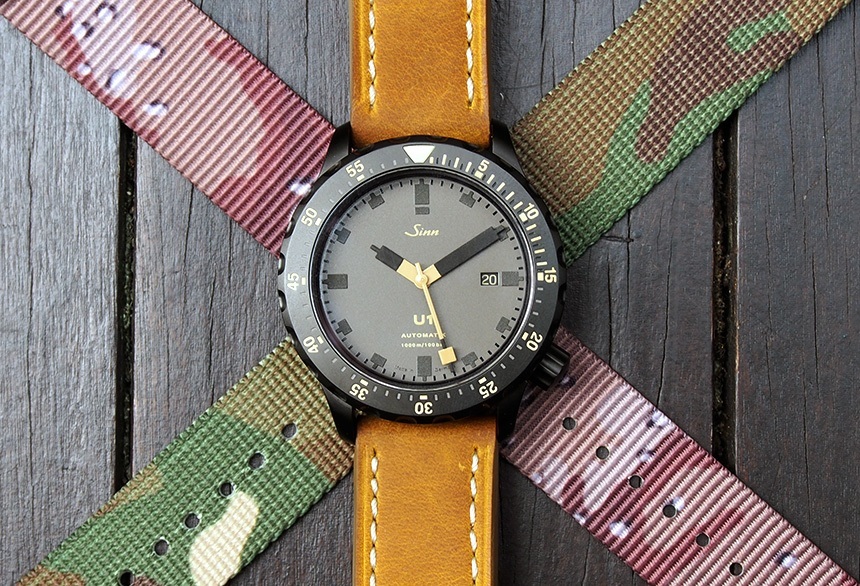 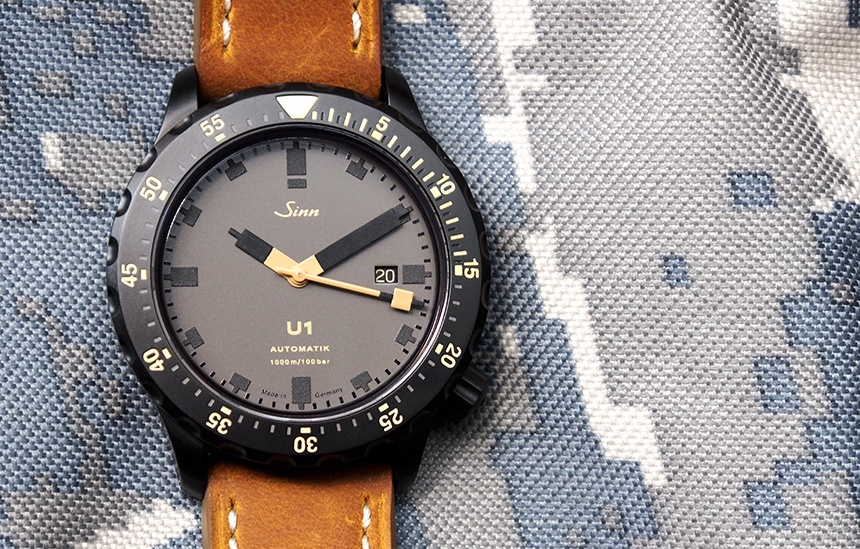 If you are a fan of Top Gear, you would have probably lost count of the number of times the boys have sung the praises of German engineering. German engineering, they say, is the best kind. For anyone who has driven or sat in an Audi, BMW or Mercedes-Benz, there is some truth to that saying… and I expected to see nothing less while waiting for the Sinn U1-D “Dune” Limited Edition to come in for review. Let’s see how it managed to live up to the expectations.

In the world of horology, the term German engineering or watchmaker has a distinctly different meaning. It means to trod off the beaten path, it means being alternative and different, and it also means being functional yet beautiful. The heart of German watchmaking is arguably in the small town of Glashütte, where most of the German brands are based. However, outside of Glashütte and not so far from the financial heart of Europe (Frankfurt am Main) is Sinn Spezialuhren. 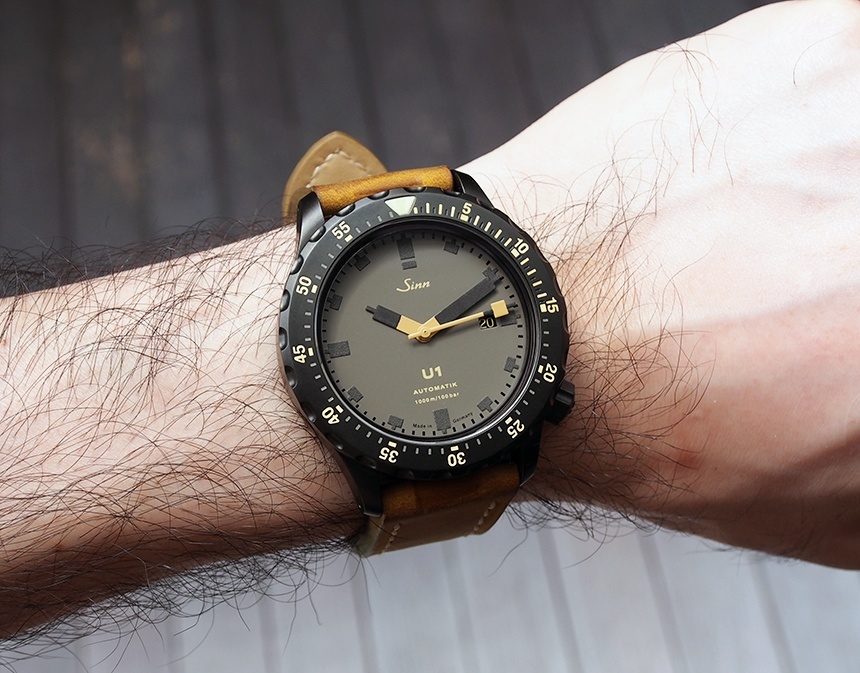 Translated, Spezialuhren means “special watches,” which should give you a rough idea about the kinds of watches Sinn makes. The brand, which was established in 1961 by flight instructor and pilot Helmut Sinn, specializes in making tool watches for professional use. Together with the Faculty of Aerospace Technology at the Aachen University of Applied Sciences, Sinn has even developed a new technical standard called TESTAF for pilot’s watches. And Sinn watches have even gone to space – German physicist and astronaut Reinhard Furrer wore a Sinn 140 S during the Spacelab D1 mission in 1985. 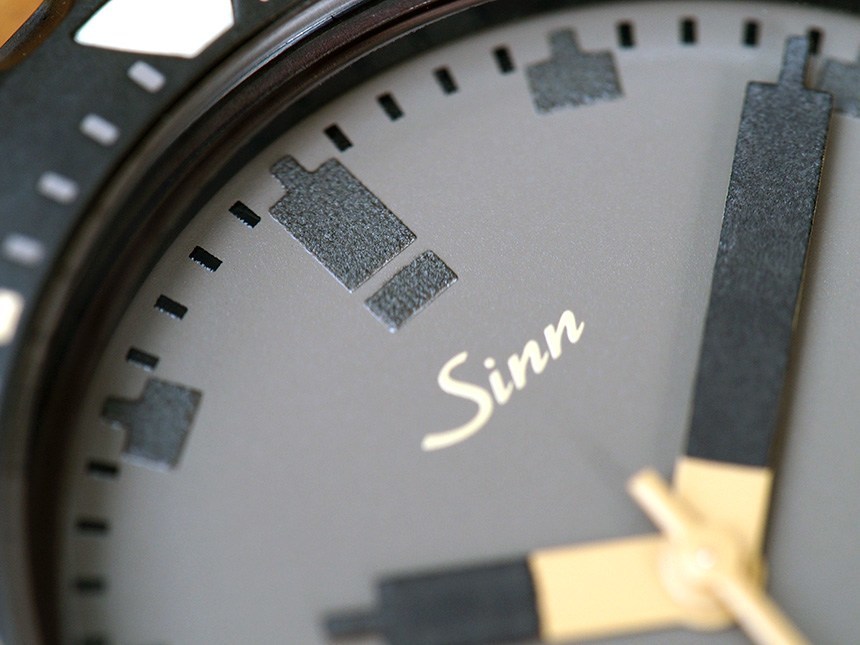 As a result, when someone wanted a tool watch for a reasonable amount of money, Sinn tended to be one of those names that were thrown around and one of their most popular models is the U1 dive watch, which we reviewed some time ago. And in the 10 years that the U1 has been around, it has also been the subject of numerous limited edition models – such as this cool one in white. And for 2015, Sinn has collaborated to celebrate the 35th anniversary of The Hour Glass, one of Asia’s leading watch retailers and also Sinn’s exclusive retailer in the South-East Asia region, giving you the watch that you see here, the Sinn U1-D.

The D in the Sinn U1-D’s name stands for Dune, which explains the watch’s color choices. The markings on the bezel as well as parts of the hands and also the text of the watch are rendered in a sandy hue and the case has been given a special black coating to match. The end result is a watch that looks as if it were designed specifically for troops operating in desert environments. In fact, this is the first U1 to be done in a military style. Let’s take a look at each of the watch’s components in greater detail. 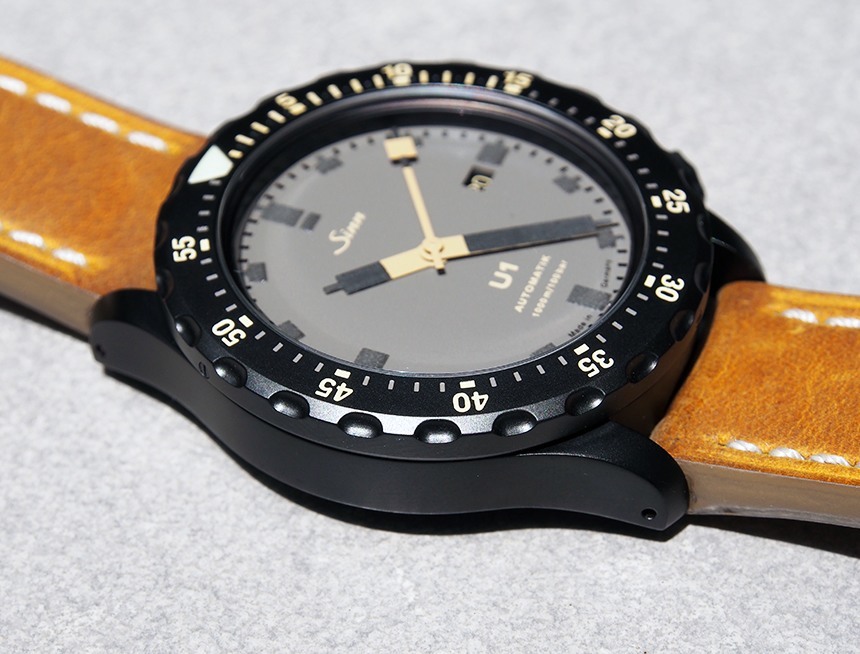 The Sinn U1-D retains the 44mm dimensions of the standard U1, and also the use of special German submarine steel. According to Sinn, German submarine steel is highly resistant to seawater and also stronger, harder, and denser than regular stainless steel. This makes it ideal for diving. Speaking of which, the Sinn U1-D is water resistant to 1000m. Yet despite the high water resistance, it remains relatively thin, at around 14mm.

The Sinn U1-D’s case has also been given a special Black Hard Coating. The coating is expertly applied and gives the case a uniform matte finish. The special coating aside, the case has also been treated with Sinn’s special TEGIMENT process. The TEGIMENT process is not just a mere coating and is in fact a special process that actually hardens the surface of the material. What this means for owners is that the Sinn U1-D is extremely tough and scratch resistant. 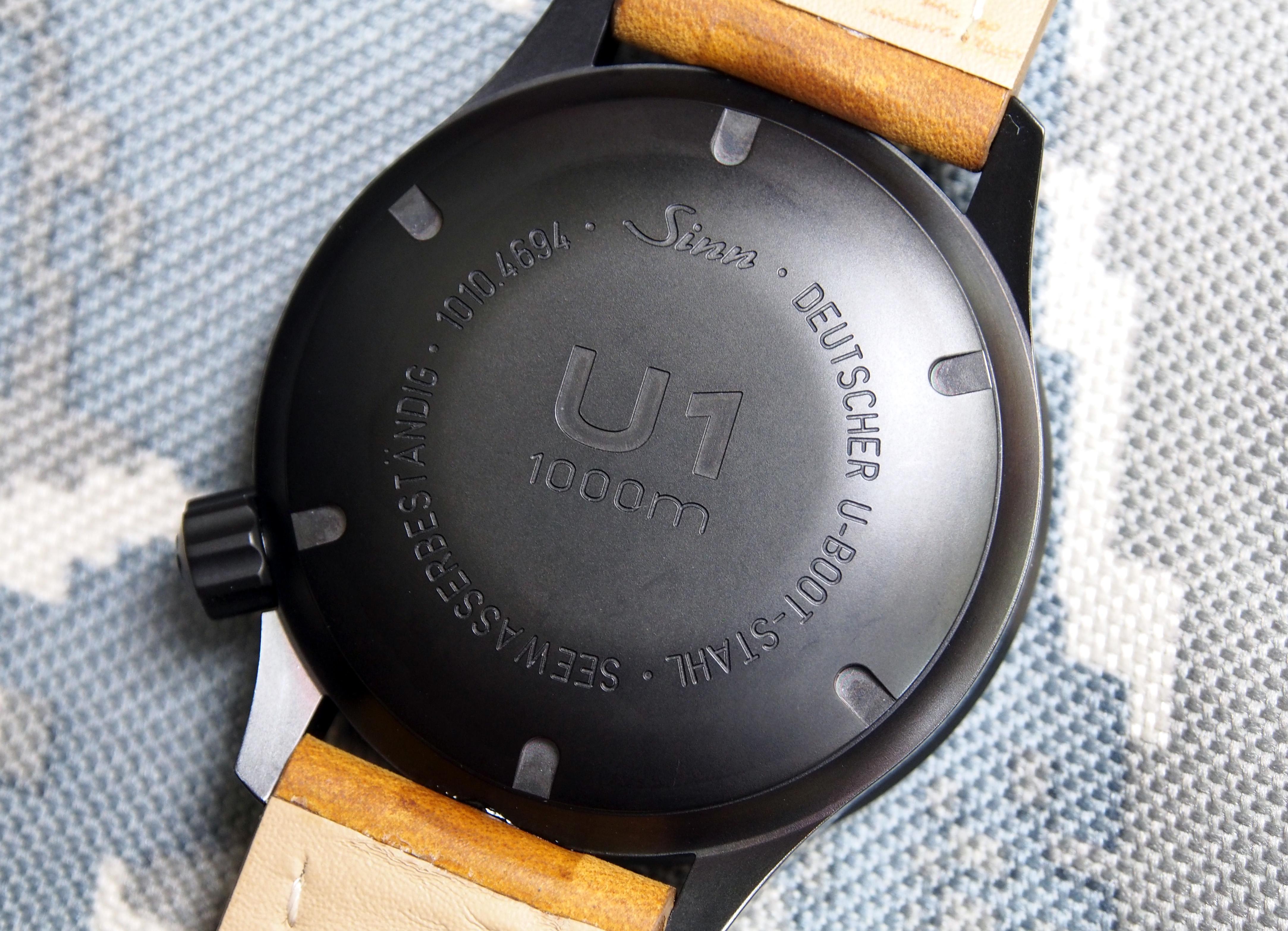 Elsewhere, the case back has also been given a matching Black Hard Coating and matte finish, and proudly proclaims in German that the case material is German submarine steel and that it is resistant to saltwater. The crown too has the same Black Hard Coating and matte finish. The uniform finish on all components of the case translates to a very utilitarian look and feel for the watch.

Like the case, the unidirectional bezel has also been given the special Black Hard Coating and treated with the TEGIMENT process. And it’s worth noting at this point that I haven’t had any problems with scratches in the time that I have had the watch. The bezel also features a safety mechanism that prevents it from being knocked out off the watch, which could potentially be dangerous in diving situations. Additionally, the bezel clicks into sixty positions and the action is firm and reassuring, with no play whatsoever once the bezel moves into place. 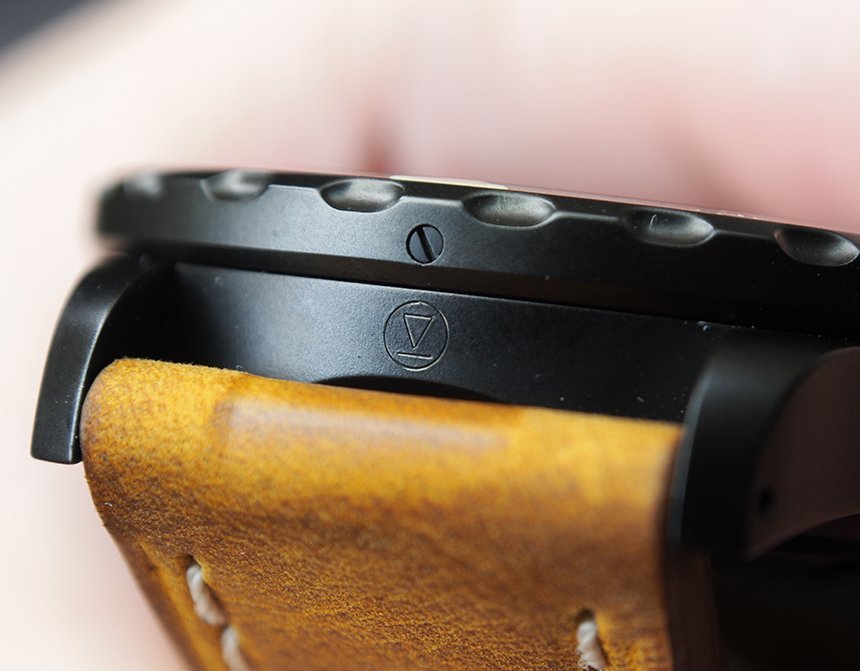 As mentioned earlier, the bezel features minute markings in a sandy hue, which gives it a military look that is unlike any other dive watch from a premium watch brand that I can think of today. Only the large 60 minute marker features lume, and it’s pretty bright too. 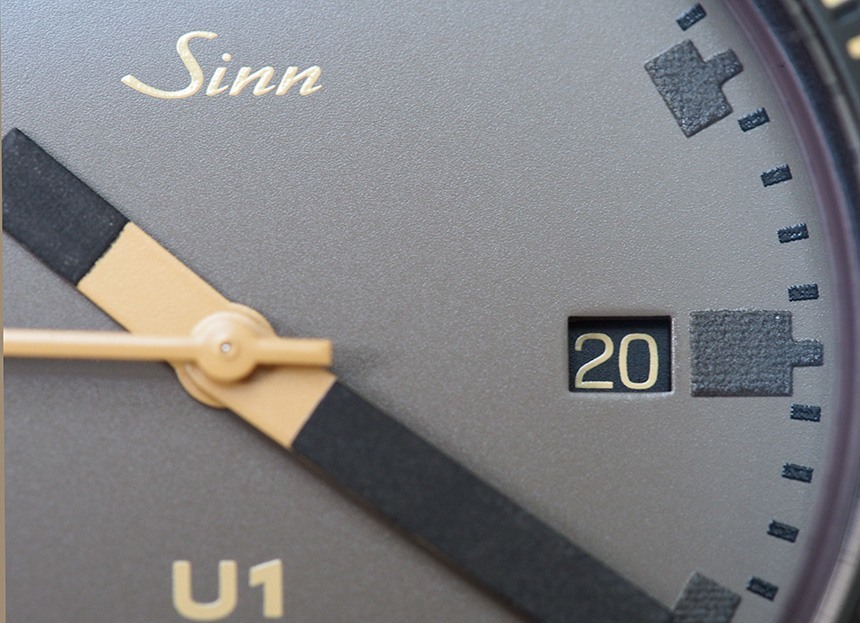 Like the standard U1, the Sinn U1-D has a flat sapphire crystal with anti-reflective coating on both sides. To match the blackened case, the dial is a shade of light grey (almost the color of concrete) with charcoaled indices, and text is printed in the same sandy brown hue as the markings on the bezel. The dial has a matte finish to it and doesn’t play much with the light, but under bright sunlight, it does change its tone a little and looks like its been bead-blasted. Finally, the hands are a mixture of sand brown and charcoal. The end result is a face that is similar in design to the standard U1, but distinctive enough to stand on its own. 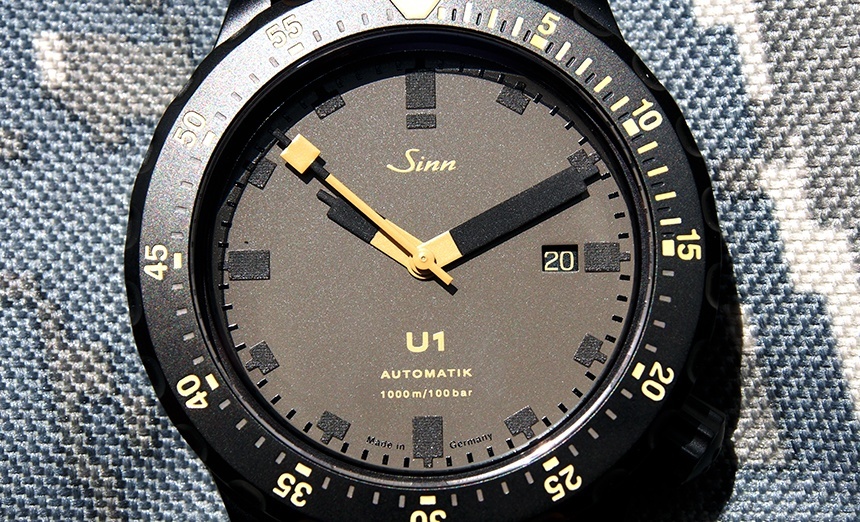 The regular U1 is a standard bearer for what an ultra legible dial should be, but the Sinn U1-D is no slouch either, even if legibility is slightly hampered by the fact that the charcoal indices and hands are quite close in color to the light grey dial. Even so, I never found it too difficult to tell the time. I also especially like the large lollipop-style seconds hand, as one quick glimpse is enough to tell you if the watch is still running.

My only gripe about the Sinn U1-D is its weak lume. Because of the use of dark charcoal colored lume, luminescence in the dark is impacted even if the indices and lume plots are large. It takes a lot of light to get going, and even after being charged under the sun for minutes, the lume diminishes very quickly. Night legibility is definitely not one of the Sinn U1-D’s strong suits. 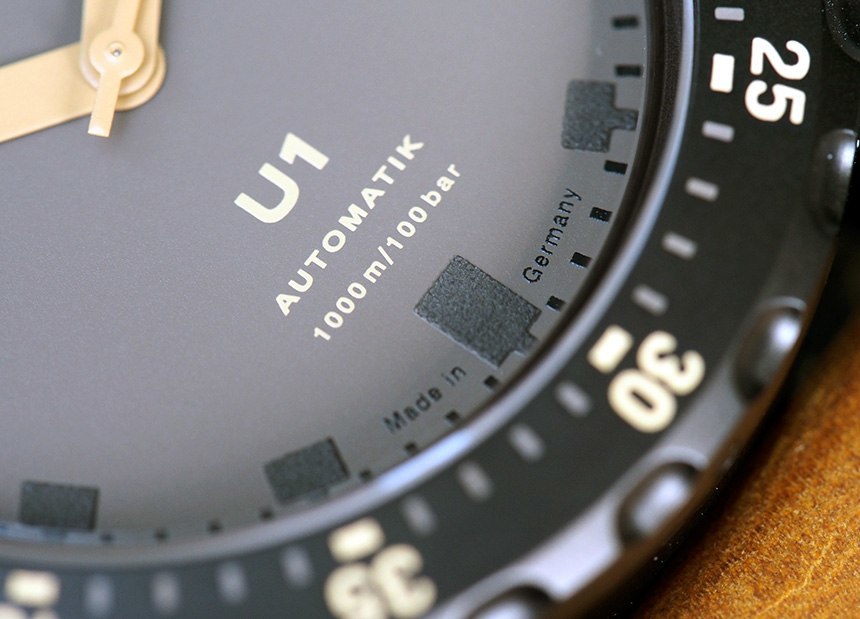 Under the dial beats a Sellita SW200-1 movement which – other than being one of today’s few truly reliable workhorse movements – is nothing much to write home about. For the uninitiated, the Sellita SW200-1 is a copy of the ETA 2824, and is widely used by companies now that ETA is cutting back on sales of its movements to companies outside of the Swatch Group. Sinn was one of those companies affected as it used to equip its U1 watches with the ETA 2824 caliber. In any case, the SW200-1 caliber beats at 4Hz and can be wound by hand and it also hacks – everything you would expect from a modern movement. Unfortunately, the Sinn U1-D is not chronometer certified, but it kept decent time in my experience. In my case, I found that it was fast by about 8 seconds per day; not fantastic, but not terrible by any stretch of the imagination either. 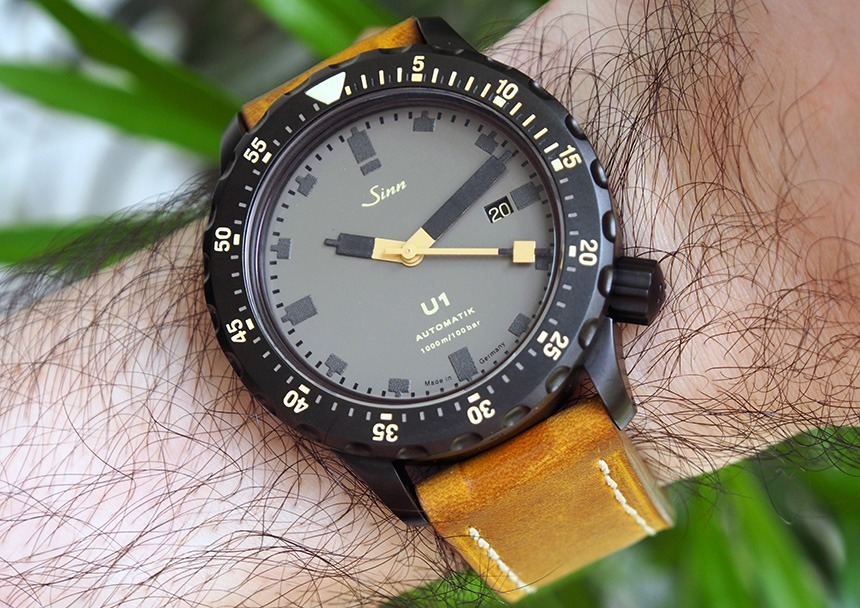 Despite the 44mm case size, the Sinn U1-D wears a little small to me and feels more like a 42mm watch. This is partly due to the compact and curved lugs, which create the impression of a smaller watch. And because it is just 14mm thick, it is large but not overly so. In fact, 14mm for a diver rated for 1000 meters of water resistance is pretty impressive. The Rolex Submariner is rated to 300 meters and it’s about 13mm thick. Overall, I found the Sinn U1-D is a comfortable fit for my 6.5-inch wrist. 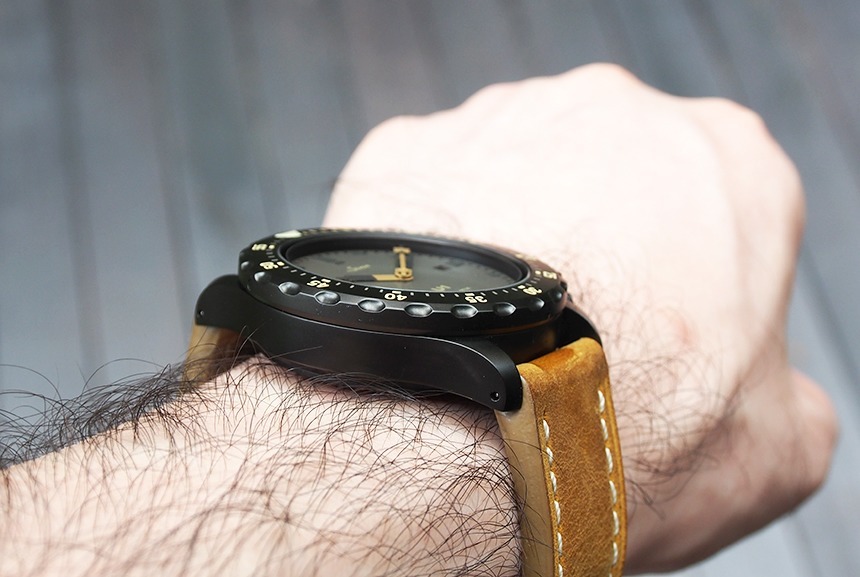 Because of the design and color of the Sinn U1-D, it is best suited as a serious tool watch or casual watch for after work hours or the weekend. Its certainly not as versatile as the standard U1, which could be dressed up with a bracelet or dark leather strap. And I think Sinn fully recognizes this as it provides the U1-D with an additional two military-inspired camouflage-style Zulu straps in sand and army green. 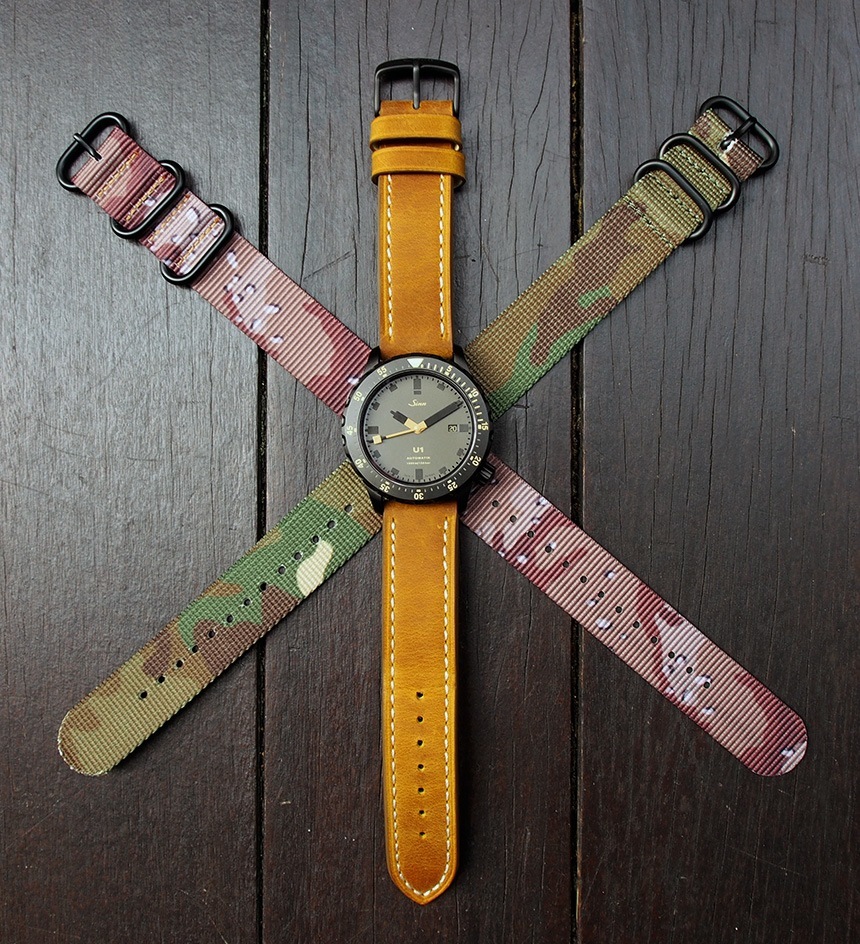 The Sinn U1-D also comes with a calf leather strap, which is the strap that you see in the photos here. The strap has a nice warm tan look and texture and is soft and comfortable on the wrist. What’s more, it even comes with a matching black buckle. My only complaint is that the edges of the strap are painted, because having raw-finished edges would have complemented the Sinn U1-D much better. Fortunately, the Sinn U1-D uses spring bars and has lug holes, so changing straps should be a cinch. 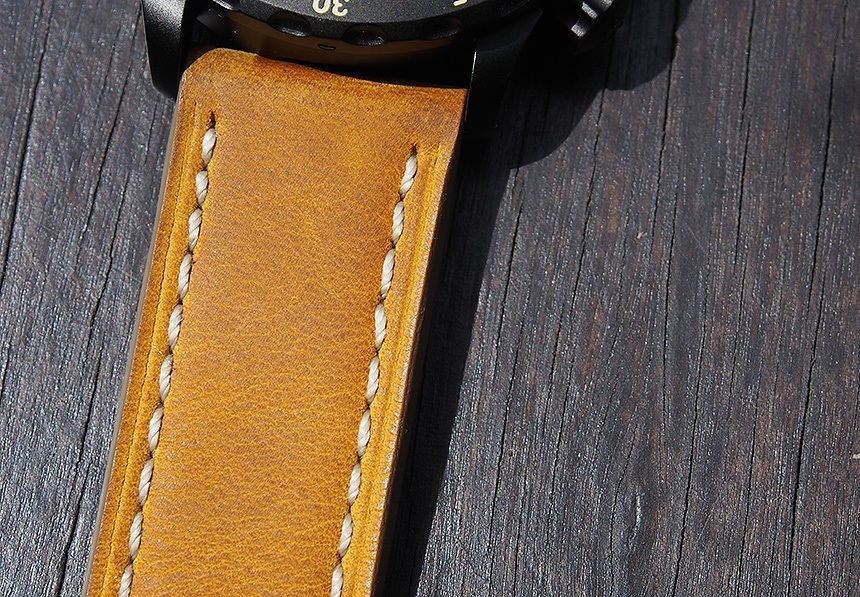 All in all, the Sinn U1-D is just a really solidly built watch and there’s a lot to like about it. From a pure technical standpoint, the Sinn U1-D is built like a bomb. The use of German submarine steel coupled with the Black Hard Coating and Sinn’s own TEGIMENT process means the case is as tough as nails. The movement, though nothing fancy, kept decent time in my experience and is a tried-and-tested movement that runs well and is easy to service. The fact, that it is also easy and comfortable to wear is just the icing on the cake. Like the standard U1, the Sinn U1-D is the perfect example of a hardy tool watch.

But, like I mentioned earlier, the Sinn U1-D “Dune” is not exactly the kind of watch that you can take from the beach to the boardroom. Its colors and overall design means it’s best suited as a casual watch, or if your workplace does not enforce a strict dress code. Versatility is not one of its strong points. What’s also not one of its strong points is its rather weak lume – an issue that, to this day, remains unsolved when it comes to luminescent materials that are of darker colors.

Nevertheless, I think the Sinn U1-D deserves credit for its coherent overall design. So often have I seen limited edition watches miss the mark by having design cues that do not meld well, that the phrase “limited edition” has, to me at least, become almost a warning for “watch out, dubious design ahead.” Fortunately, the Sinn U1-D is not one of those watches. The desert military inspired design has been integrated nicely and everything else from the dial to the case and the straps and buckles all complement and fit each other to a T.

The standard Sinn U1 is quite a common sight, but since the Sinn U1-D is limited to just 350 pieces, exclusivity is pretty much assured. The Sinn U1-D is priced at S$4800 or at around US$3570, depending on the exchange rate. sinn.de